The contemporary house was designed by Paritzki & Liani Architects in 2015. 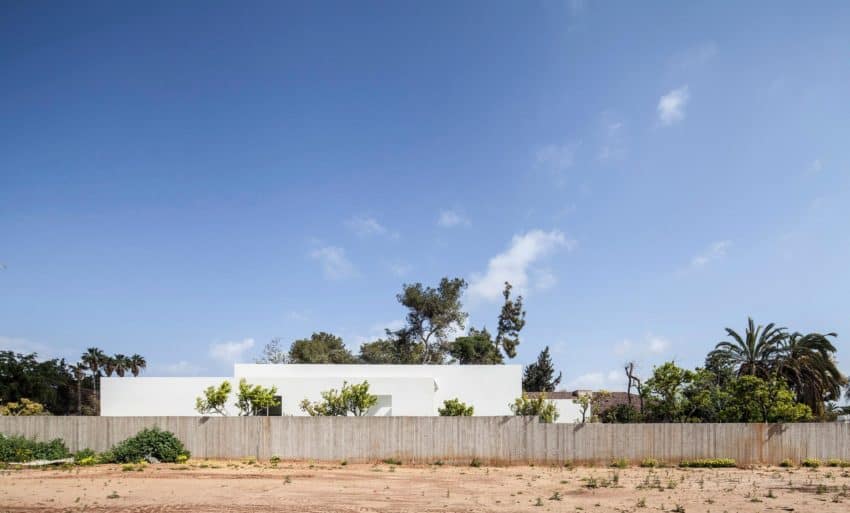 “The T/A house is a three-spanned structure formed from four parallel walls which create three volumes; these are respectively 3.4, 5, and 2.8 metres (9.8, 16.4, and 9.2 feet) high and occupy a long, narrow terrain.

These volumes were positioned additively on the site between the house’s exterior and interior to create interconnecting rooms of similar proportions.

This model of connected rooms – something also to be found in such vernacular architecture as that of farmhouses in Puglia, rural Catalan farms, and the three-part plan of houses in Jaffa – permits a permeable flow between the activities of the inhabitants of the house and their social life.

The main entrance from the roadside garden, placed diagonally with respect to the front door, screens the activities inside the house. The whole length of the lot can be seen from the front door of the tallest volume. Possible paths to be followed are indicated by the wide thresholds between the two internal walls, placed face-to-face just beyond the entrance.

The volume which contains the kitchen and the family room overlooking the deep garden also has a view of the internal patio located in front of it as well as of the two private rooms in the night zone. The library, the last room in the living area, acts as the crossing point for arriving in the parents’ private apartment.

The central volume is the gallery which contains the family’s private collection of pictures and is also the point of intersection for all movement within the house. It is here that the movement of people inside the buildings is punctuated by observation points between the objects, collections, and internal trees.”

The Cluny House by Guz Architects