Slanted House is a private residence located in Jakarta, Indonesia.

It was designed by Budi Pradono Architects in 2015. 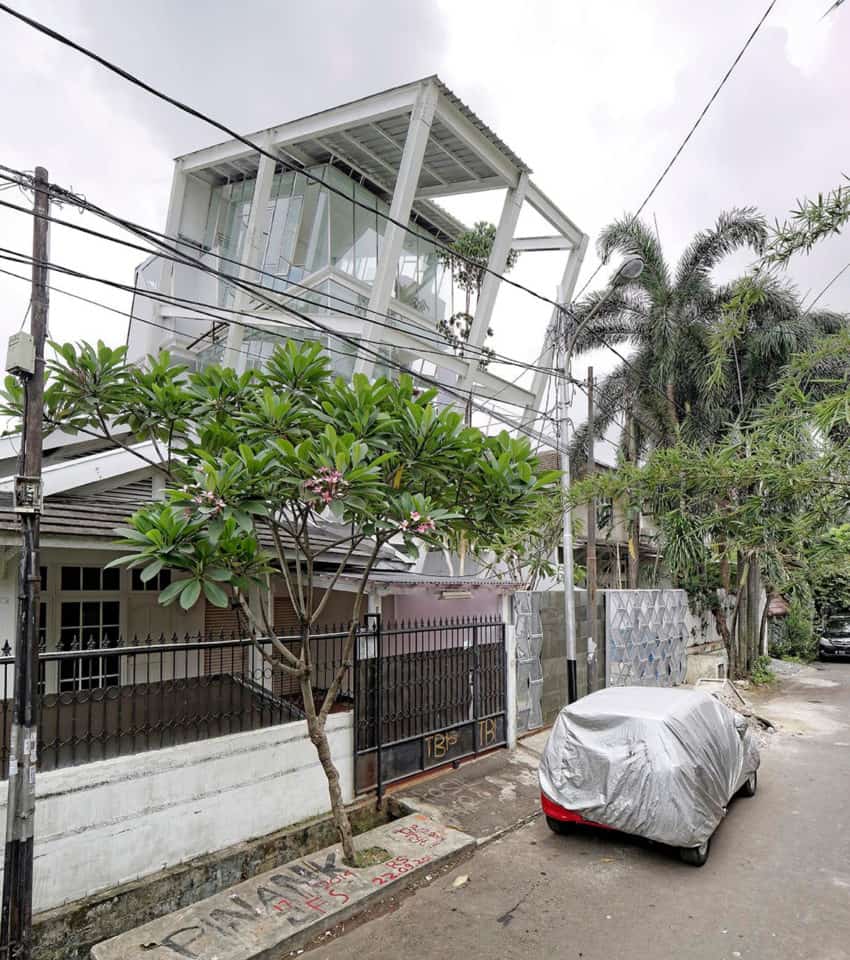 This small house is located on 8mx20m (26ftx65.6ft) lot in Pondok Indah district. Although it is a part of a gated community, this building is located on the edge of small river, with indigeneous (urban) village settlements right across the river. Pondok Indah in South Jakarta is a residential area/gated community which is indeed successfully built in the 80’s. Since then until this moment, Pondok Indah is being a symbolic status. Some of the most successful parliament member in Jakarta as well as some celebrities who come from other regions feel like it is a must to have a house in this area. These symbols of success, aside from where it is located, generally showed by its architecture language. For instance, some structural columns which similar as it is in Italy or France – with its artificial face. These pillars show a success. To answer this challenge, I start to question the homeowner whether she still needs those symbols or vice versa? It turns out that she agrees to demolish this situation by deconstructing this common discourse, tilting the whole house to be something that almost fall down.

It is an extreme antithesis. Architects is given a discretion to observe the environment and react with this proposal. This house is also next door with one of the Indonesian musician, Ahmad Dhani. Dhani’s house is painted all black whereas this house is all white. This unintentionally coincidence reinforce RumahMiring (Slanted House) as an architecture which criticize its environment. Architecture as a critique device in its environment.

The room function of the house uses a new sequence where the public area is placed on the first Level, it is consist of a pantry, study area and a swimming pool. Second level is functioned for more private rooms such as a master bedroom, wardrobe and master bathroom. The 16m2 (172ft2) bathroom area acts as a response to the current trend of urban lifestyle who normally spend more time in a bathroom where users are able to have more quiet time, a contemplative room as well as a resting place while using smartphones, reading newspaper or social media as a communication device.

The top level is used for a lounge and a guest room. In the building section, we can see and define that the private area is put in the middle, like a sandwich between the more public areas.

The whole building relies on the steel structure as a representative of a modern housing which depends on fabrication. The square framework is now agreed to be slanted as a symbol of instability, a deconstruction of an established situation around.”