Home » House » A Luminous Contemporary Home in the Forests of Quebec

A Luminous Contemporary Home in the Forests of Quebec

La Cache is a private home located in Quebec, Canada.

Completed in 2014, it was designed by Nathalie Thibodeau Architecte. 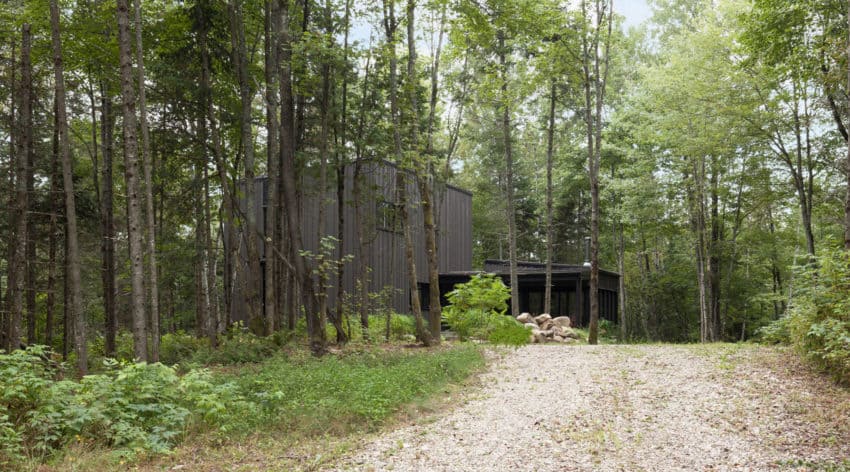 “Located on the banks of the Assomption River, in the Lanaudière region north of Montréal, the property is at the heart of a spruce forest of exceptional density, defined by verticality and narrow tree trunks, which are quite common in the region.

Perched on a rocky cap, a trail snakes around the cliff and leads to the river. While the waterway is not visible from most of the site, the sound of its impetuous current reveals its presence. One remarkable and exceptional factor is the group of mature birch trees that colonized the flank of the cliff, adding a luminous, almost unreal touch to the site.

Since the project has a very small footprint, it was interesting to play with the verticality of the setting. The project was built at the top of the cliff so as to benefit from its height, and play on the verticality of the spruce forest, like a hunter’s blind in the woods. It is located in the heart of the forest, near a group of birch trees that take centre stage. For this reason, the living room windows and doors were designed as tableaux, so the monumentality of the setting can be appreciated.

The project unfolds through the site and culminates at the river. The path meanders through various living spaces. Terraces were laid out all along the path so that each space can be appreciated differently, according to the time of day.

The sombre and austere character of the setting, created by the dense forest, was enhanced by the tall, darkly coloured construction, so as to melt into the environment as much as possible. The project can be glimpsed among vertical tree trunks and through the sharp points of spruce branches.

The verticality of the volumes means that the site opens upwards, allowing light to enter the building. The second floor is treated not as a mezzanine, but as a kind of crack, so the light gets in.

Since the project has a very small footprint, the building is distributed across two wings. The first comprises the main residence, the second is the veranda – an essential space in this region. The veranda is separated from the house by a covered passageway which draws attention to the cliff and the river below.

The entrance to the house, on the north façade of the main wing, has very few windows.

The verticality of the openings echoes the form of the house. The compact footprint required the interior volumes to be spacious and light-filled. From the entrance area, a corridor leads visitors to the living spaces located to the south. The staircase to the floor above accentuates the verticality of the whole. With its interminable chimney, the slow-combustion stove, located at the far end of the floor, maintains the phenomenon.

The kitchen was placed on the south side, near to the veranda, where many a summer meal is enjoyed. The view of the landscape is more open on this side, and the versatility of the space allows a greater diversity of uses.

The staircase up to the bedrooms was installed in an opening through the second floor, opening the space across both storeys. A corridor runs the entire length to connect the bedrooms, but also to bring light to the ground floor.

The openings were conceived as tableaux, framing the landscape, seeking to melt into omnipresent nature, as much by the scents from the forest as the songs of birds, or the nearby river. Light, filtered through the trees, changes with the hours of the day and the seasons of the year, and offers a place that is constantly changing, in perfect harmony with the living being that is the surrounding forest.”

A Home Nestled in the Woods of Eastern Townships, Quebec

A Contemporary Home in the Forests of Kenmore Hills

Luminous Contemporary Home in The Hague