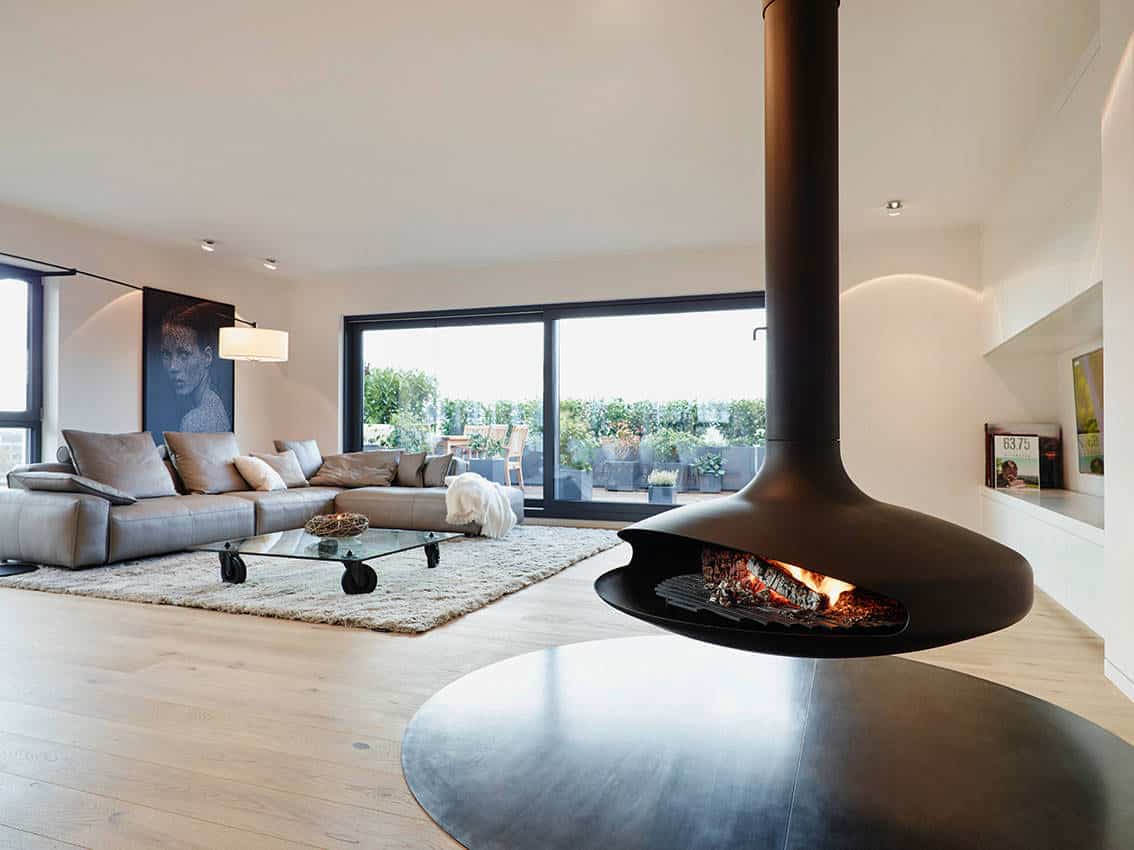 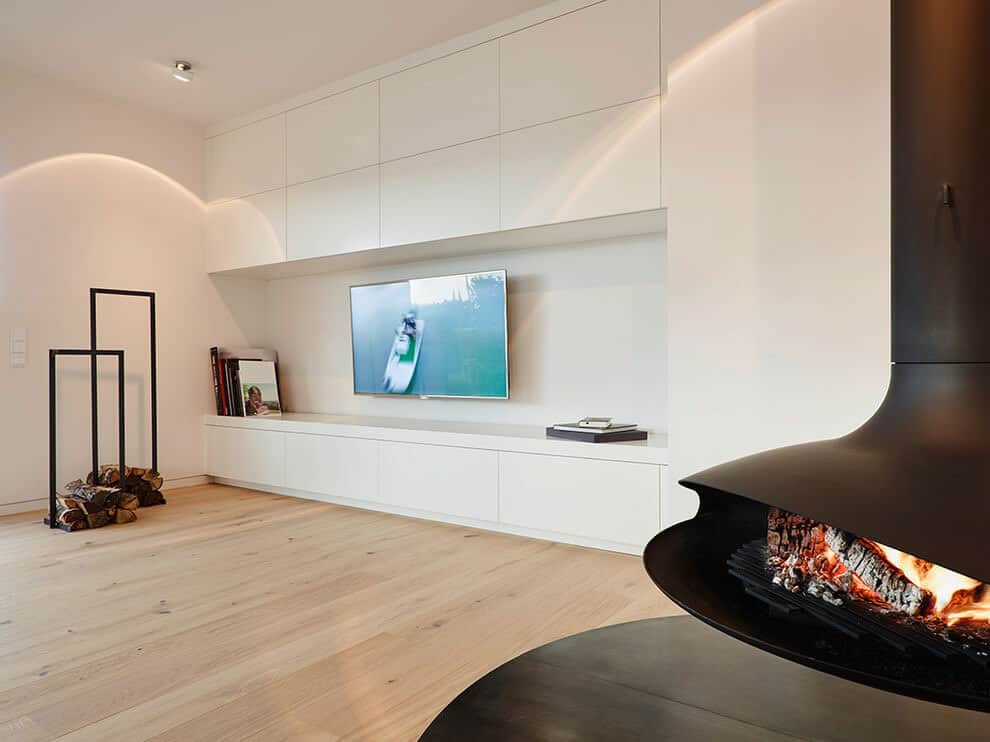 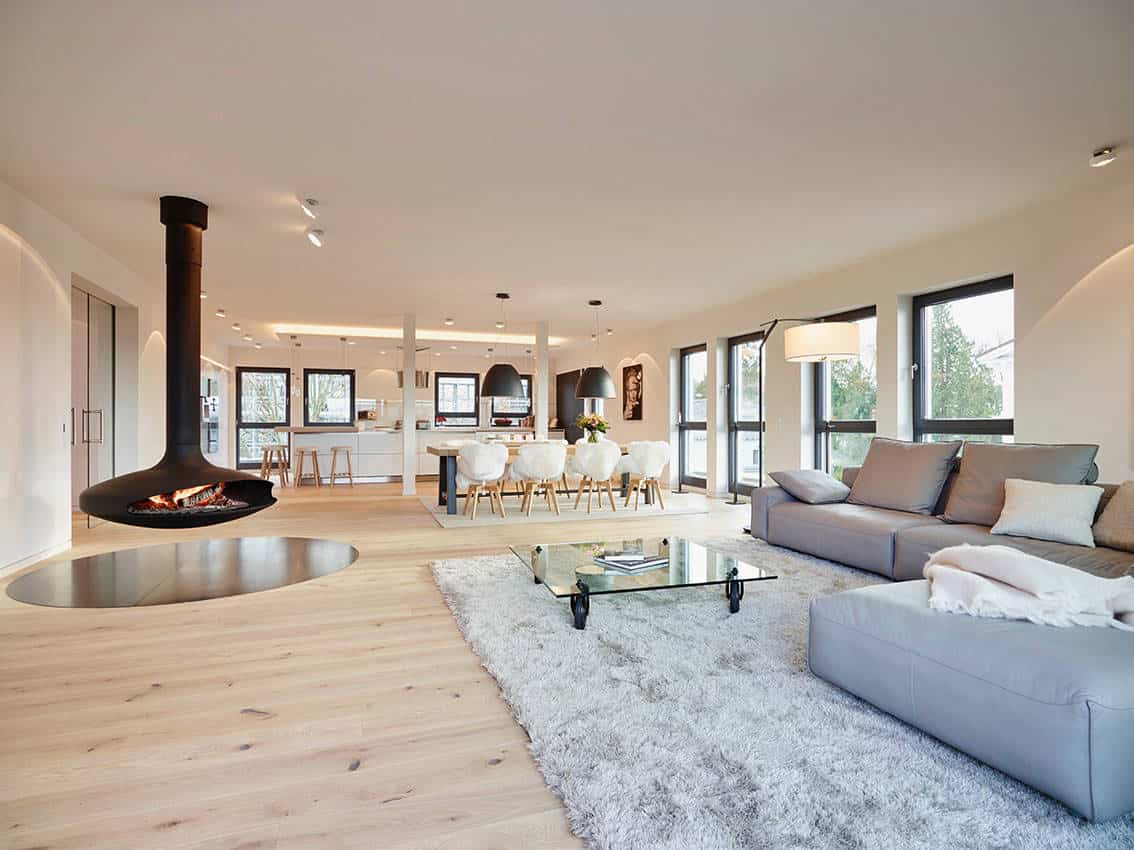 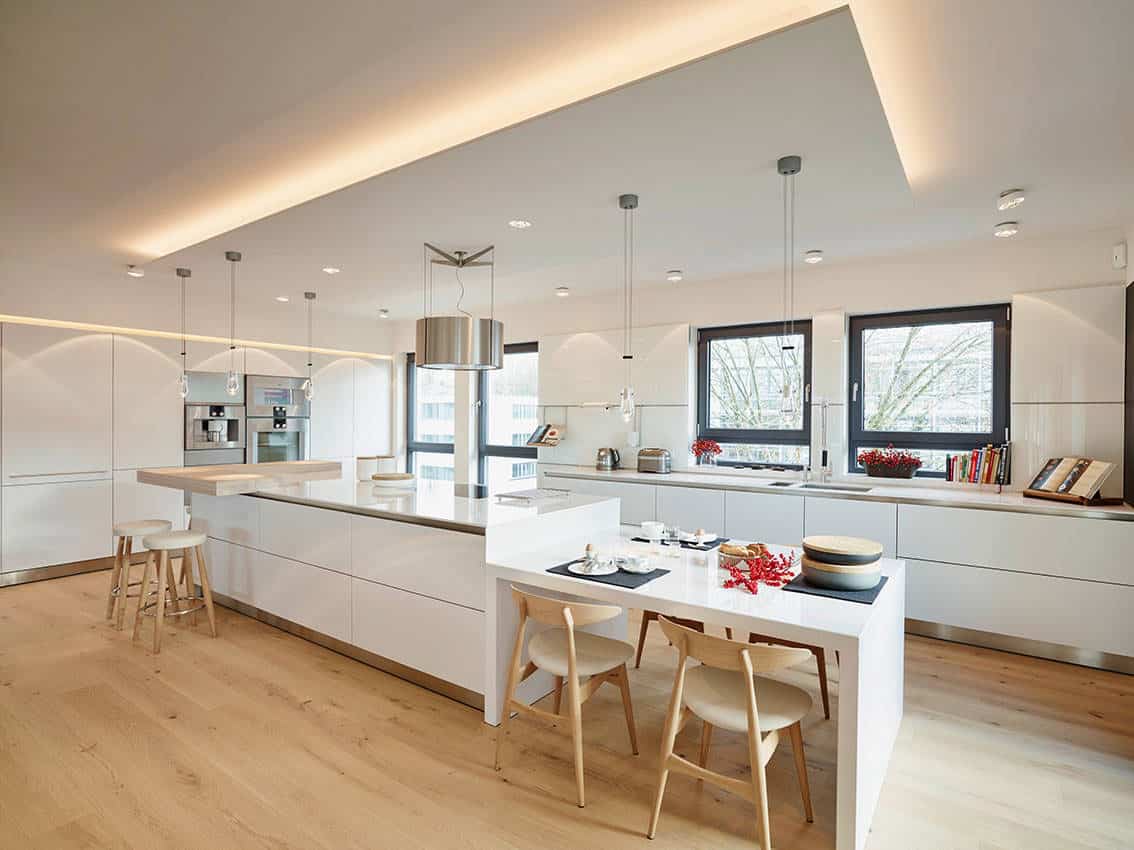 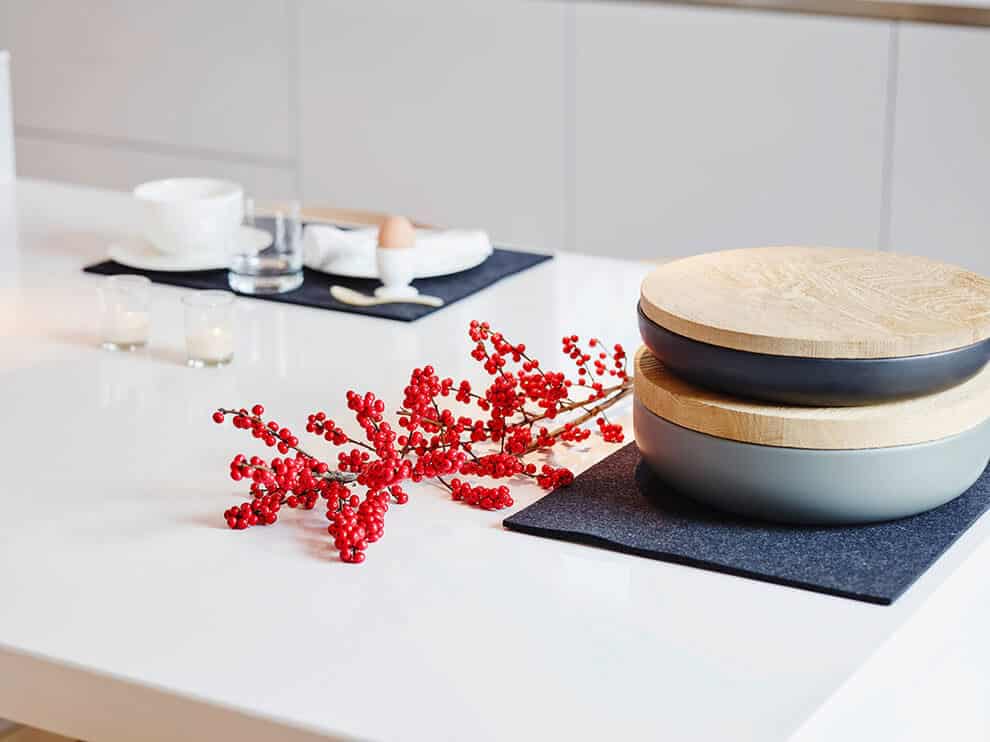 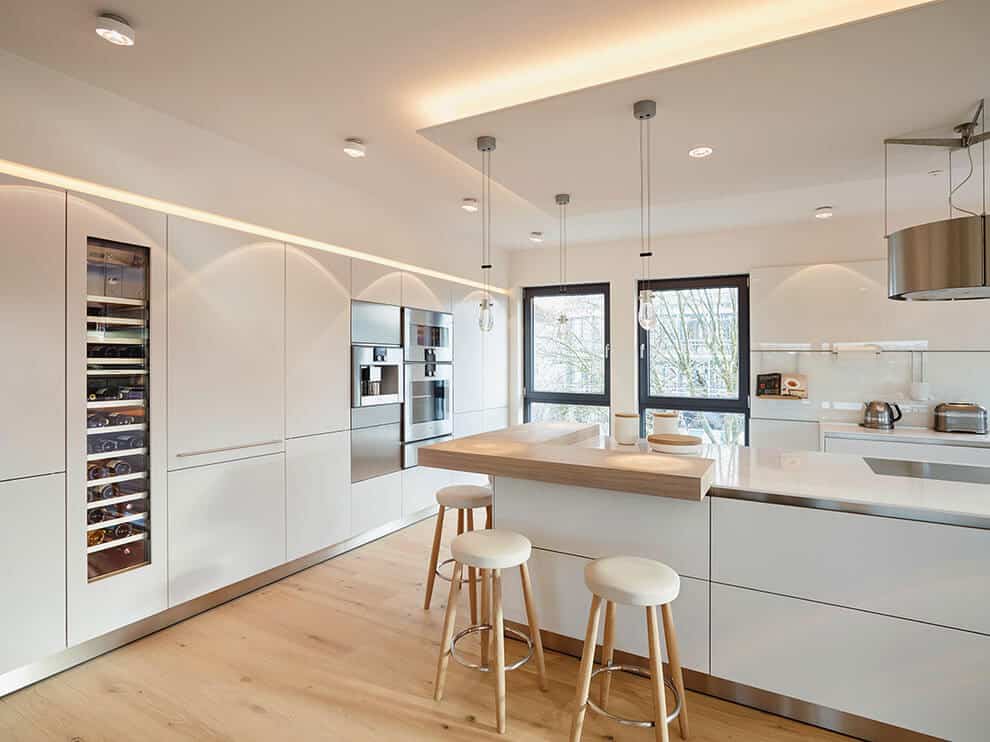 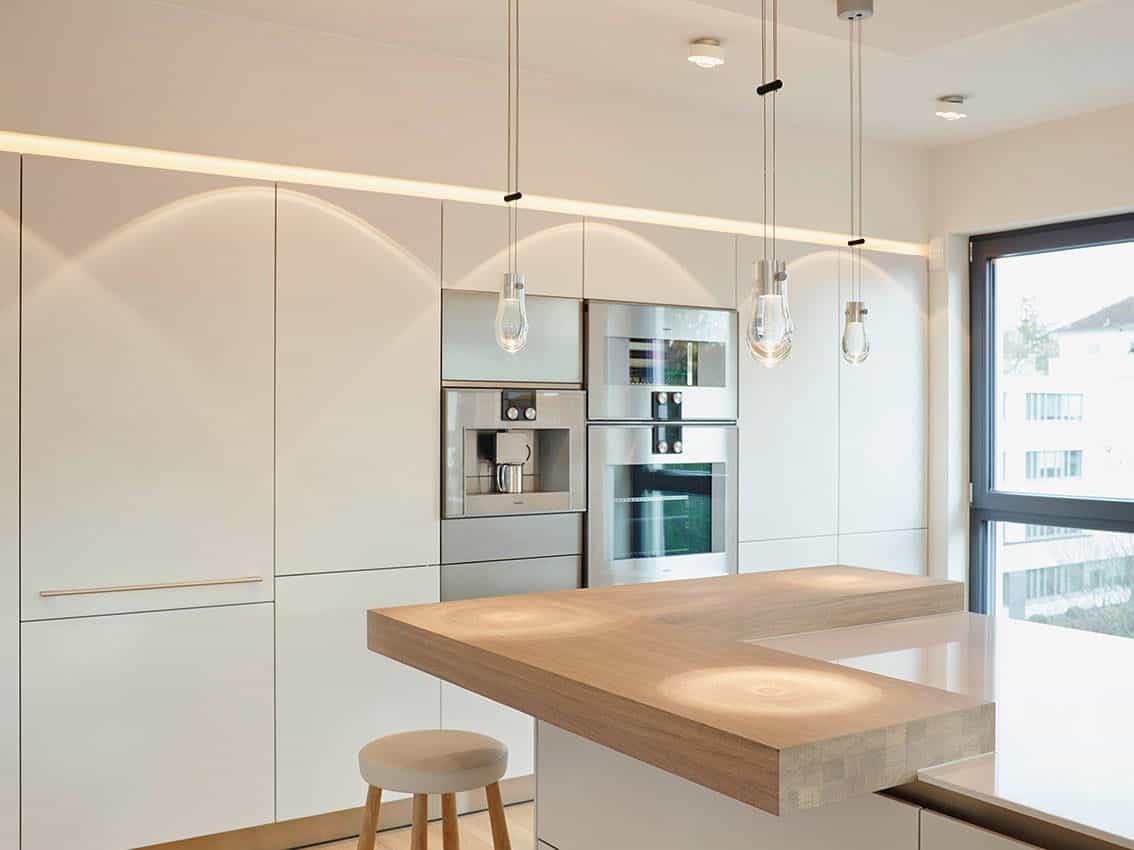 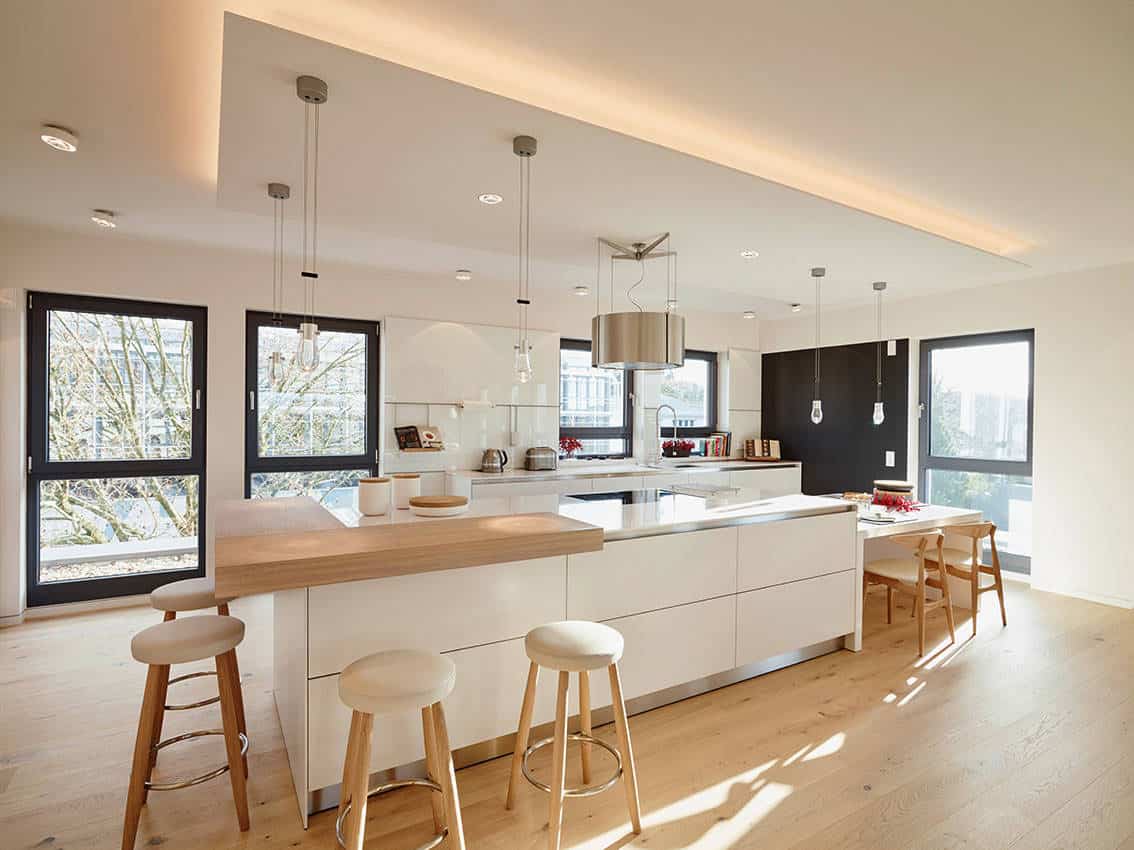 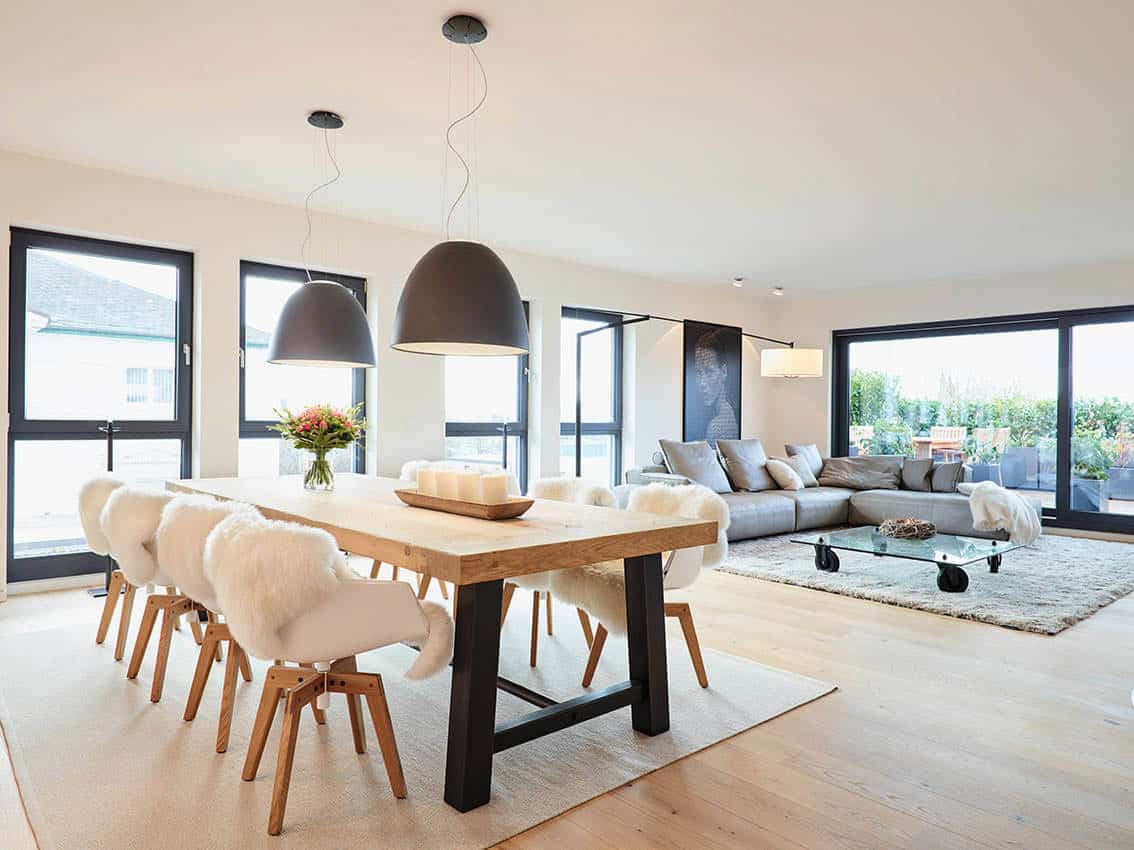 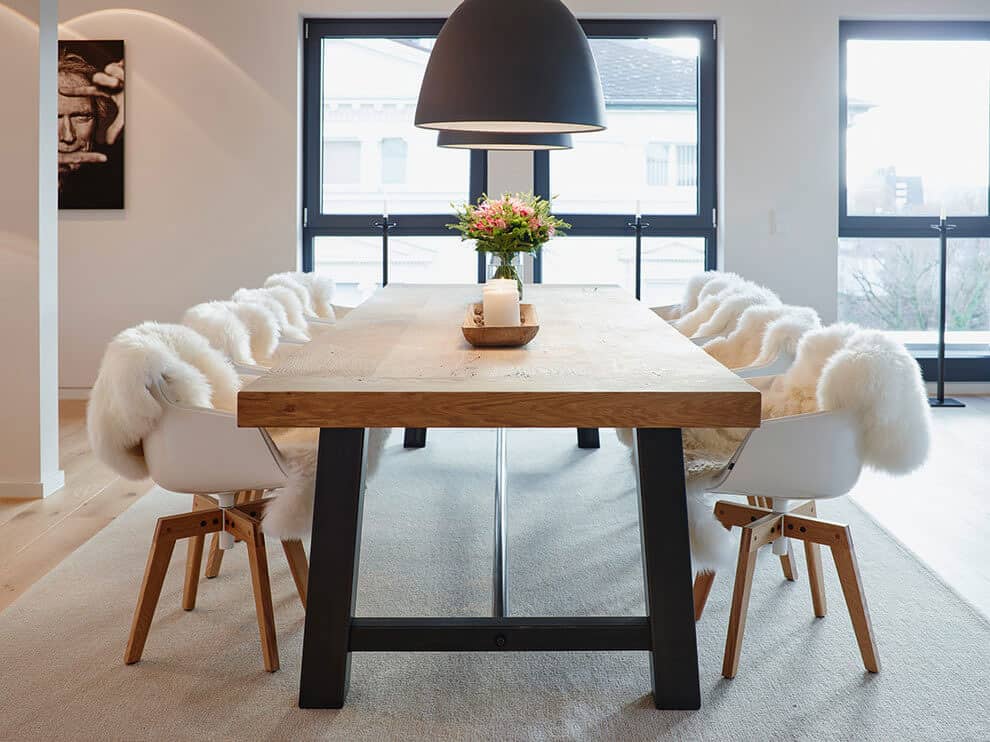 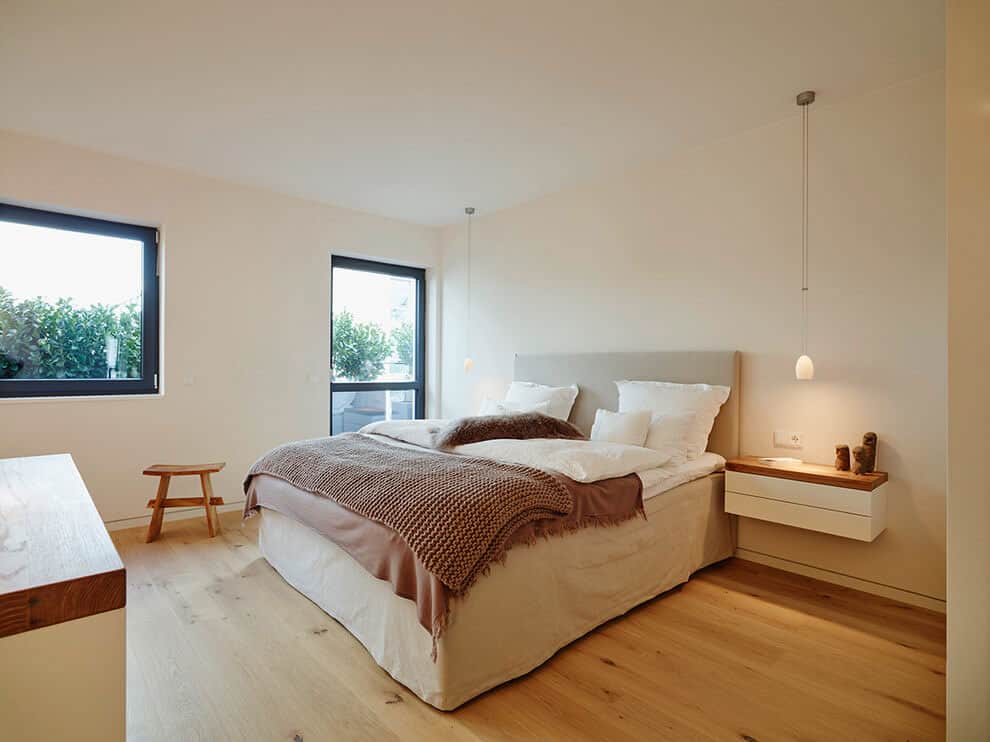 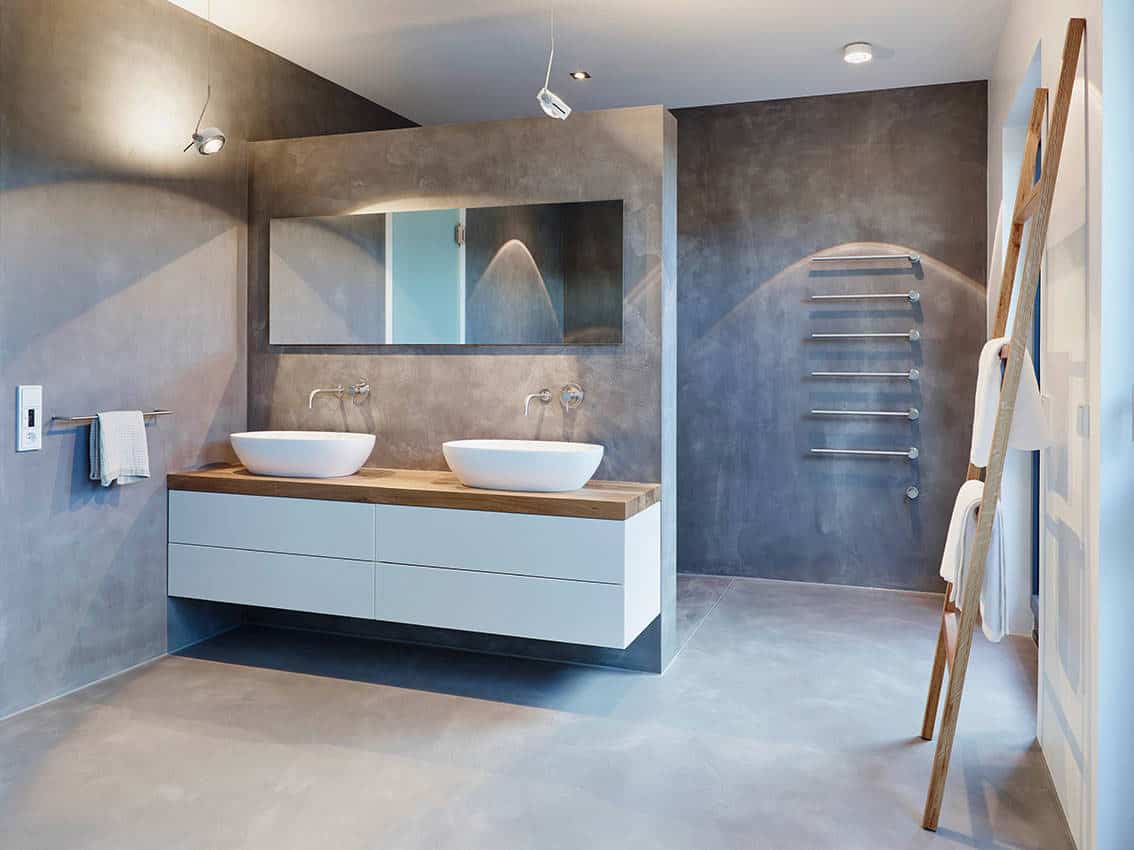 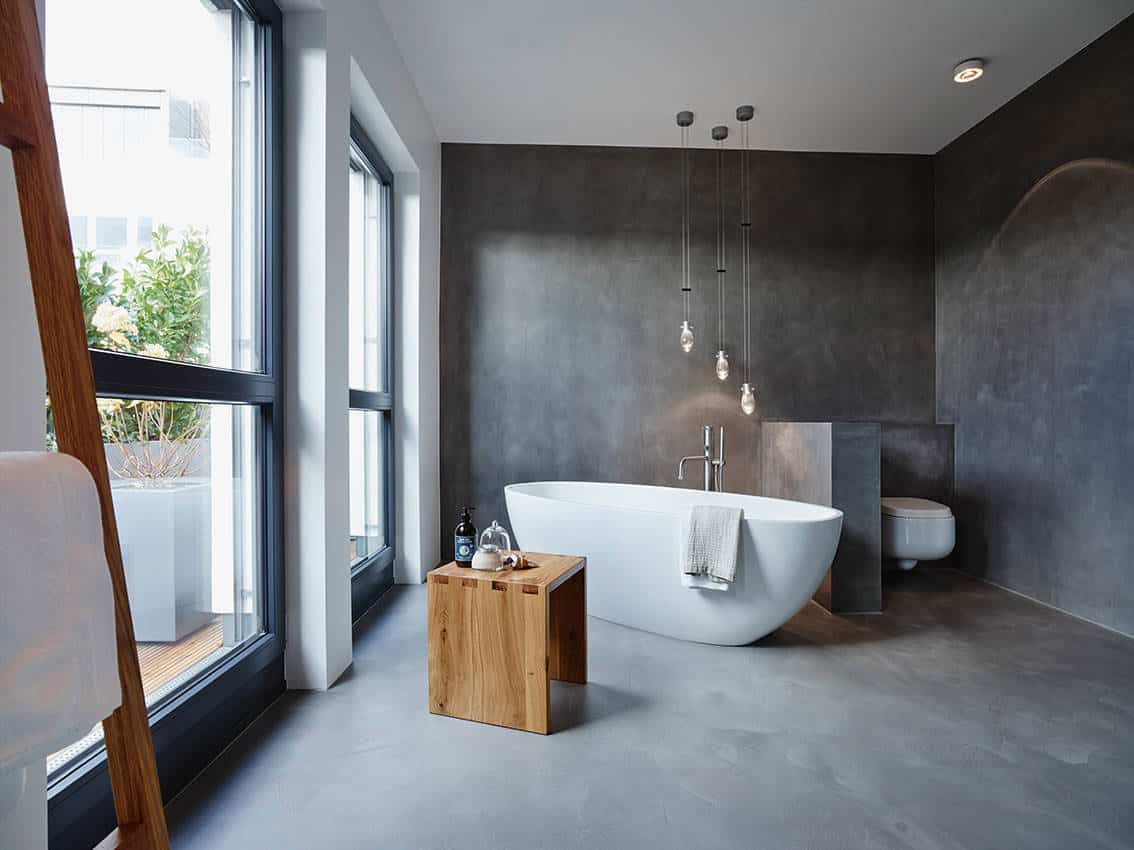 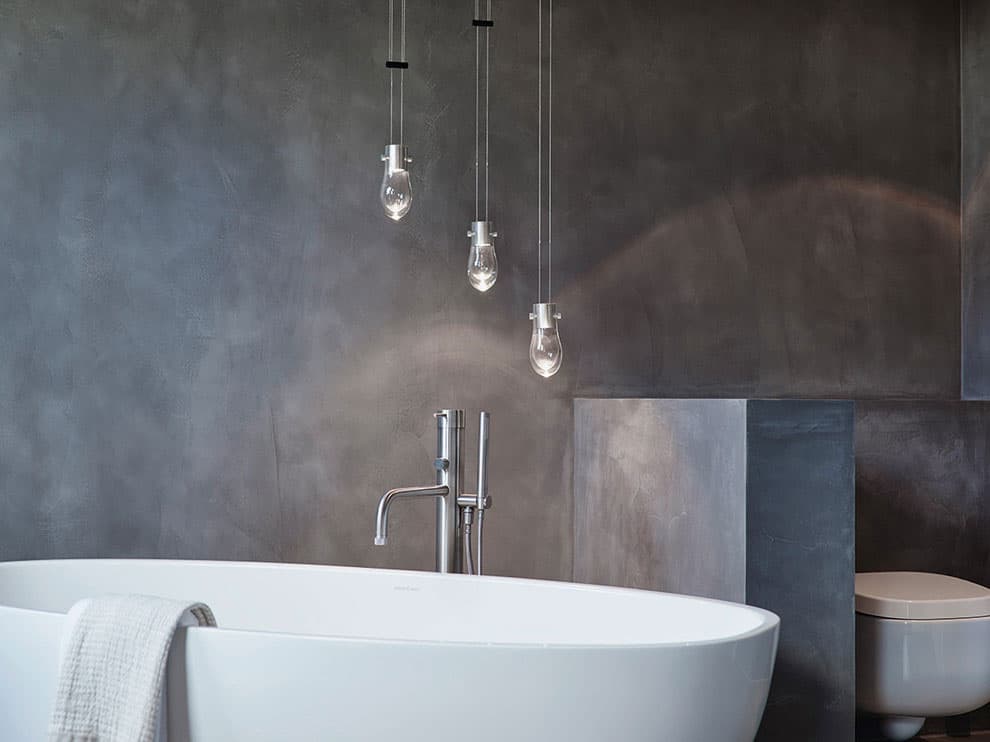 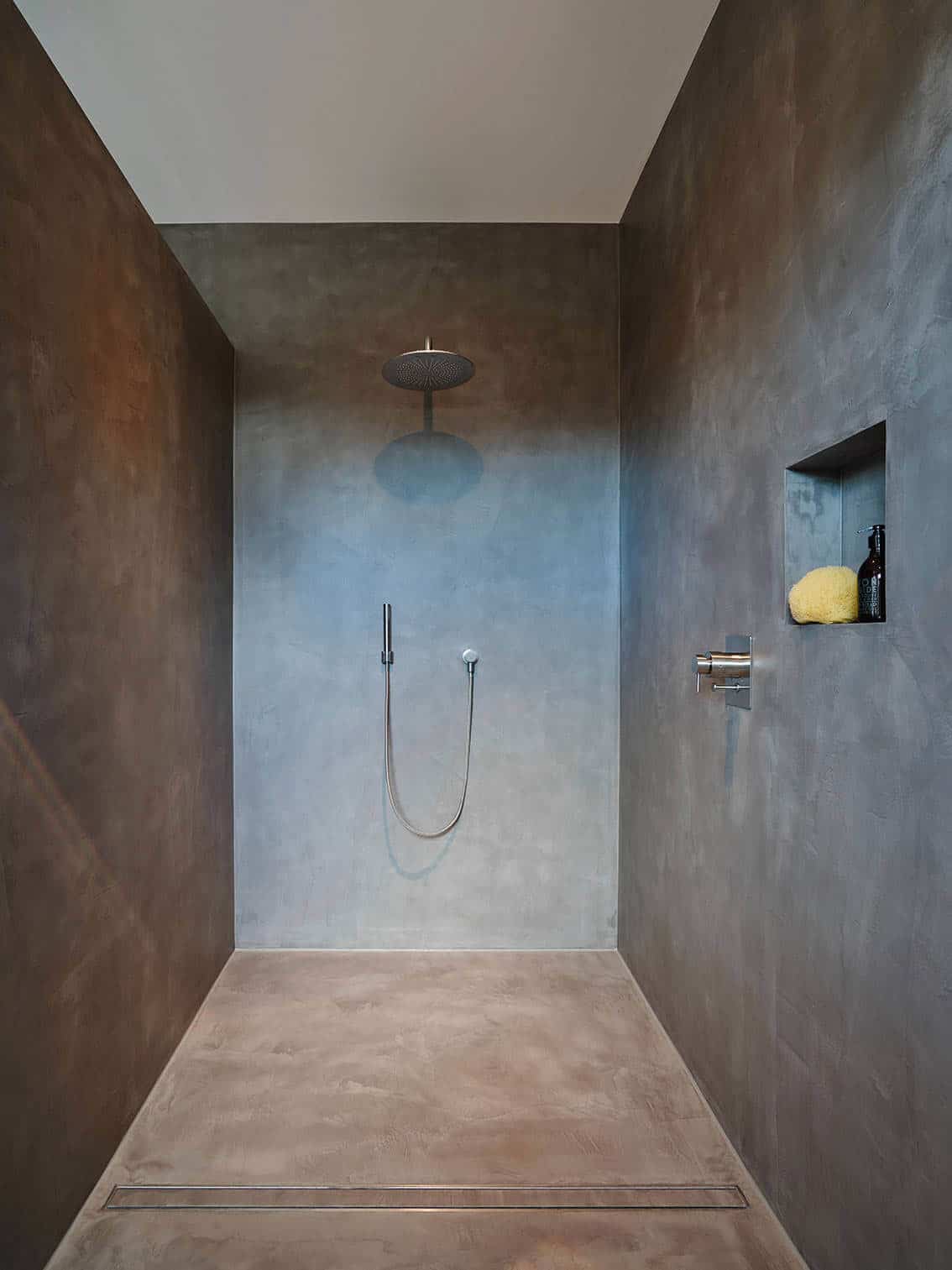 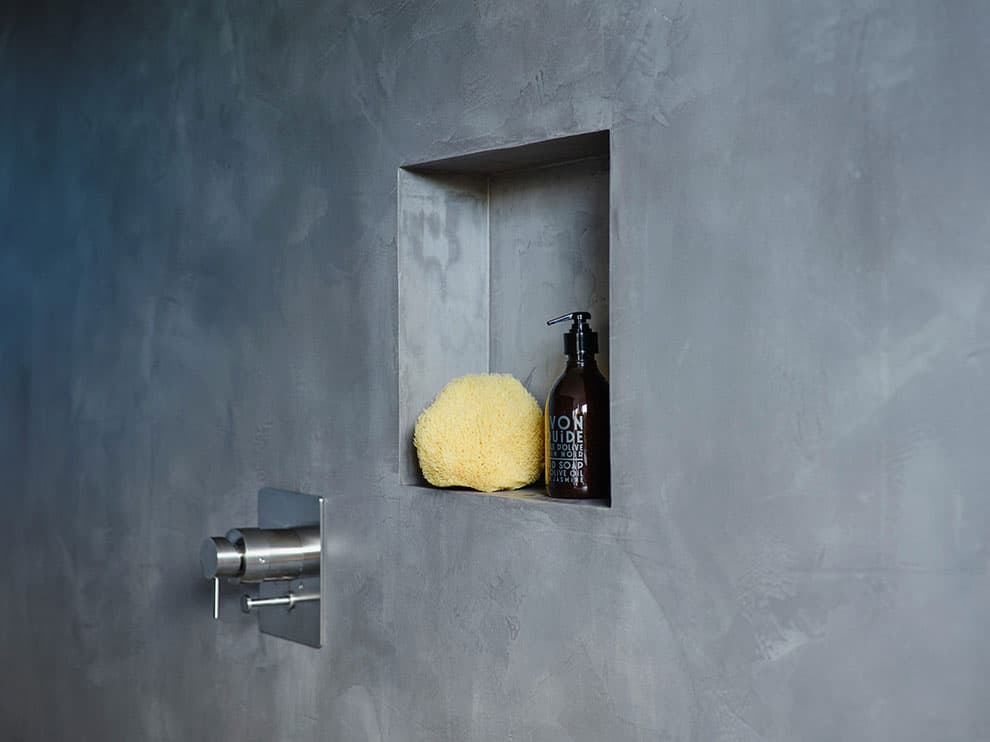 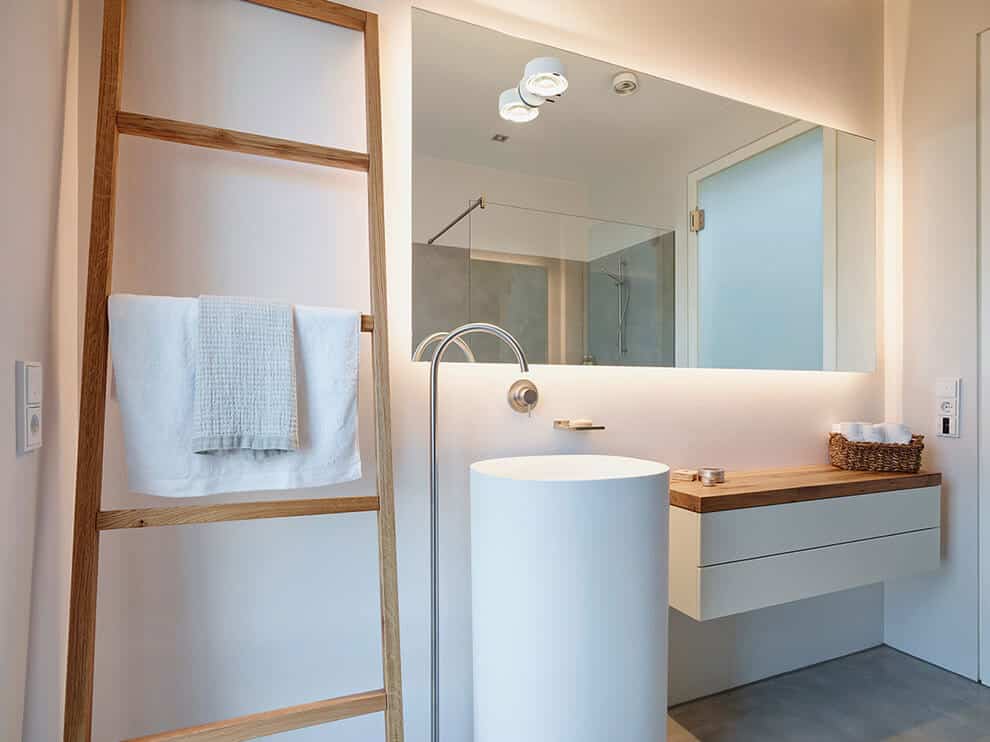 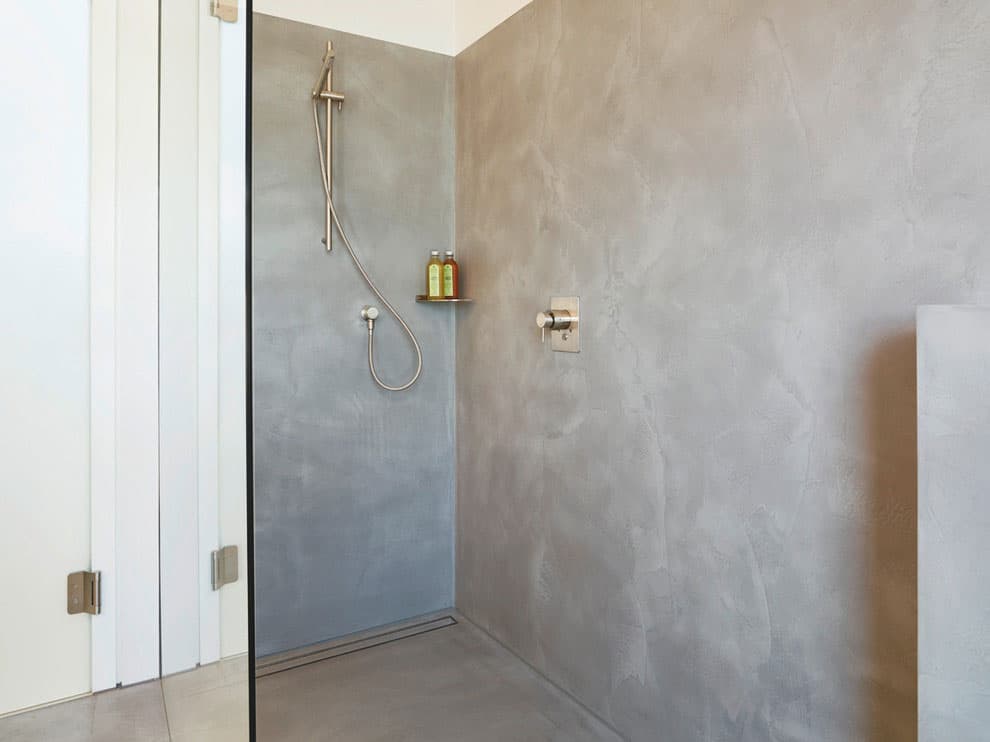 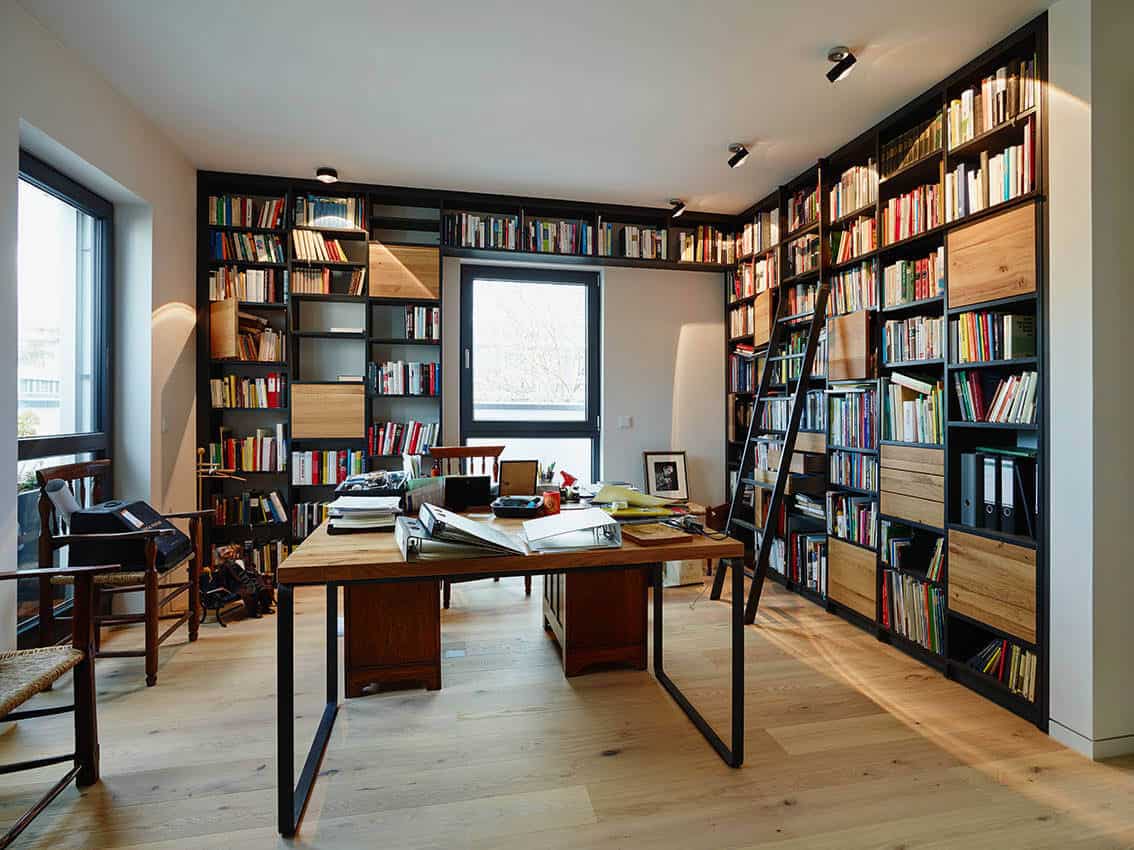 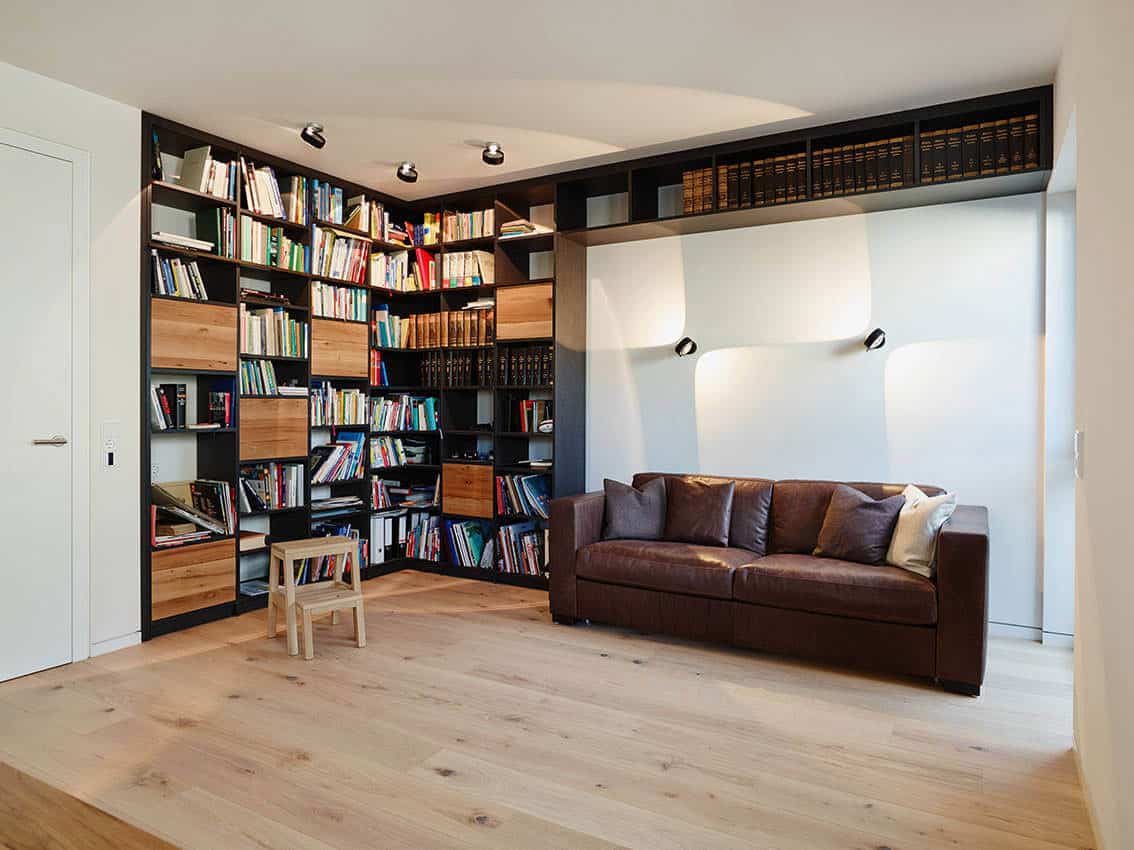 Penthouse is a project completed by Josep Ruà Spatial Designer in 2014.

It is located in Valencia, Spain.

“This former caretaker’s house was renovated ten years ago in order to build an open-concept layout and two terraces, one facing east and one west. The result was a box completely isolated from the outside and two detached terraces.

And so the main premises of the project were, first of all, creating a master bedroom with an en-suite bathroom. Secondly, it was important to establish a clear differentiation between the day and the night areas. And of course, there was a problem of storage to be solved; quite a challenge if we take into account the scarce 50 square meters (538 square feet) of floor and 20 (215) of terrace.

In order to do this, we proceeded to cover one of the terraces, keeping a preexisting slight elevation of two steps. The master bedroom was located then here. The floor was divided into two halves by a curved wall that, together with the bookcase, helped soften the severity of the space.

As the volumetric space was so small, it was necessary to integrate all the elements to get further visual cleanliness and harmony, as well as the possibility of free circulation.

As the space was so small, it required the integration of every element in order to get further visual cleanliness and harmony, as well as the possibility of free circulation. This was achieved by a volumetric solution based on mobile-immobile pieces of furniture, both inside and outside in the flat roof, thus giving one more twist to the concept of household equipment already introduced by Le Corbusier.

The aesthetic was clear from the beginning, since this was not my first project for Carmelo: it required naturalness, neutrality and brightness. Wood, stony colors and above all light, lots of light.

This piece constitutes the core of the house.

The kitchen remains hidden behind an automatic door, integrated into a closet which goes across the place lengthways, traversing the curved wall to become, in the end, the dressing room and thus interconnecting the night and the day area.

The one-piece countertop was acquired at VF Superficies Sólidas and it is made of Krion, a solid surface by Porcelanosa.

This disappearing kitchen gives the table a multipurpose function for it serves as both a dining table and a work station.

In front of us as we enter, we face the workbench and dining table, a design of my own, which also provides extra storage space. The air vent of the building was used to produce a sculptural volume, from where then cantilevered table originates. The front is again a closet door, imitating a latticework. The drawing is inspired both by nature and by the Dechirer piece, designed by Patricia Urquiola for Mutina.

This same pattern is repeated on the porcelain floor. It unfolds like a carpet from the workbench to dress the central space of the living-room.

Locating a coach without breaking the integration of other elements or obstructing the flow of communication was a difficult task given its volume. Finally it was decided to take advantage of the unevenness of the floor and so the area where the sofa should be placed was heighten. This new platform was endowed with a curved contour, so as to create a visual flight towards the terrace and allow the integration with the living room.

To potentiate this sensation of continuity, the picture window of the terrace was enlarged with doors disappearing behind the wall. Besides, the surface was covered with the same coating of gray micro concrete used in the terrace. Thus one environment penetrates into the other and vice versa. The possibility to customize the couch let us follow the same geometric pattern applied to the platform with the curve inviting to contemplate the outside. Thanks to all these elements, natural light, so important in this project, was granted a prominent presence.

On the other hand, artificial lighting tried to recreate atmospheres and grooves were performed on the ceiling to embed the different bulbs. In the central area, the rectilinear grooves become circular, defining a vault from where the Cloud lamp, designed by the Canadian firm Molodesign and acquired in Batavia (Madrid), hung.

The pictures were bought at Espai Tactel – Galería de arte contemporáneo in Valencia:

For its construction, we mainly proceeded to cover the terrace, while ensuring it remained completely open to the house.

The light and the sky of Valencia possess a really singular beauty. Traditional, and not so traditional, Mediterranean architecture usually tends not take advantage of this, almost as if trying to deny it. Clearly, environmental criteria come first and getting protection against the many and often suffocating sunny days of the year becomes a priority. Technological advances have led to more efficient glasses which allow them being opened to the outside and virtually fulfill the same function of environmental protection concrete enclosures provide.

And so the ceiling was pierced, beginning from the bedroom and finishing in the bathroom, so that the wonderful moon of Valencia could be seen from the inside. One of these skylights spreads towards the front façade until creating a viewpoint and thus, as in the film Lost in Translation, feed the lonesome and contemplative gaze over a city you belong to but at the same time you watch from afar.

As we did in the couch area, the higher level of the former terrace was used to delimitate the bathroom area gaining a more straight access from the bed. The bathtub, embedded in the ground and covered with the same coating as the floor, was designed in purpose.

Tokujin Yoshioka’s Phenomenon Honeycomb for Mutina was used to coat the wall in the moist area. When sunbeams penetrate through the skylight above and fall on the wall with its hexagons in different planes, the resulting play of shadows simulates the pouring rain. Therefore bathing becomes an experience, like being showered with rainwater.

Mirrors have been strategically placed in order to make the most of reflections. This way they give the feeling of a wider space and create interesting perspectives. It is precisely the case of the rotating slats which delimitate the bathroom and the dressing room: these spy-like mirrors produce multitude of versatile reflections.

The bed appears suspended from the wall. It seems to levitate and it actually gives the impression of lightness, underscored both by the headboard, an entire wall with its own light, and the curves of the ceiling, whose stretching towards the floor drifts into a smooth rounded surface suitable as bedside table. We opted again for a Molodesign lamp, this time the Cappello, available in Batavia (Madrid).

The flat roof is completely taken by a perimetral volume playing different roles, subject to aesthetic beauty. It consists of a seat for several people with diverse inclinations and dispositions so it is possible to be either sitting or lying. It resembles the slope of a hill with a tree from whose roots the seat spreads.

Imagine you are having a nap in the country. Vines and aromatic plants, both deciduous and perennial, grow in the backrest, so as not to lose the sensation of freshness and greenness.

The seat is encased in teak wood following different patterns and reproducing the landscape of vegetable farms so characteristic of the Valencian countryside, embellishing it with a unique graphic richness.

It is the same wood used in the façade of the house where white little beams were set to filter the sunlight and cast a fresh shadow over the sofa area. 100% Mediterranean.

The round chill out table is a design by CANE LINE, purchased at Mercader de Indias (Valencia).

The chair is a design by HUBSCH, also purchased at Mercader de Indias, as the POMAX pots.

The stripping wooden bench in blue along with the marble basin was bought at Derribos Andrés, in Valencia.

The guestroom also has its own ensuite bathroom. The shower and the toilet are hidden behind the sliding mirror door. The sink is embedded in a cubic volume which at the same time constitutes the headboard of the bed and is accessible from both sides. The shower is coated with FOLDED ceramic pieces, a design by the London-based studio Raw Edges for Mutina.”