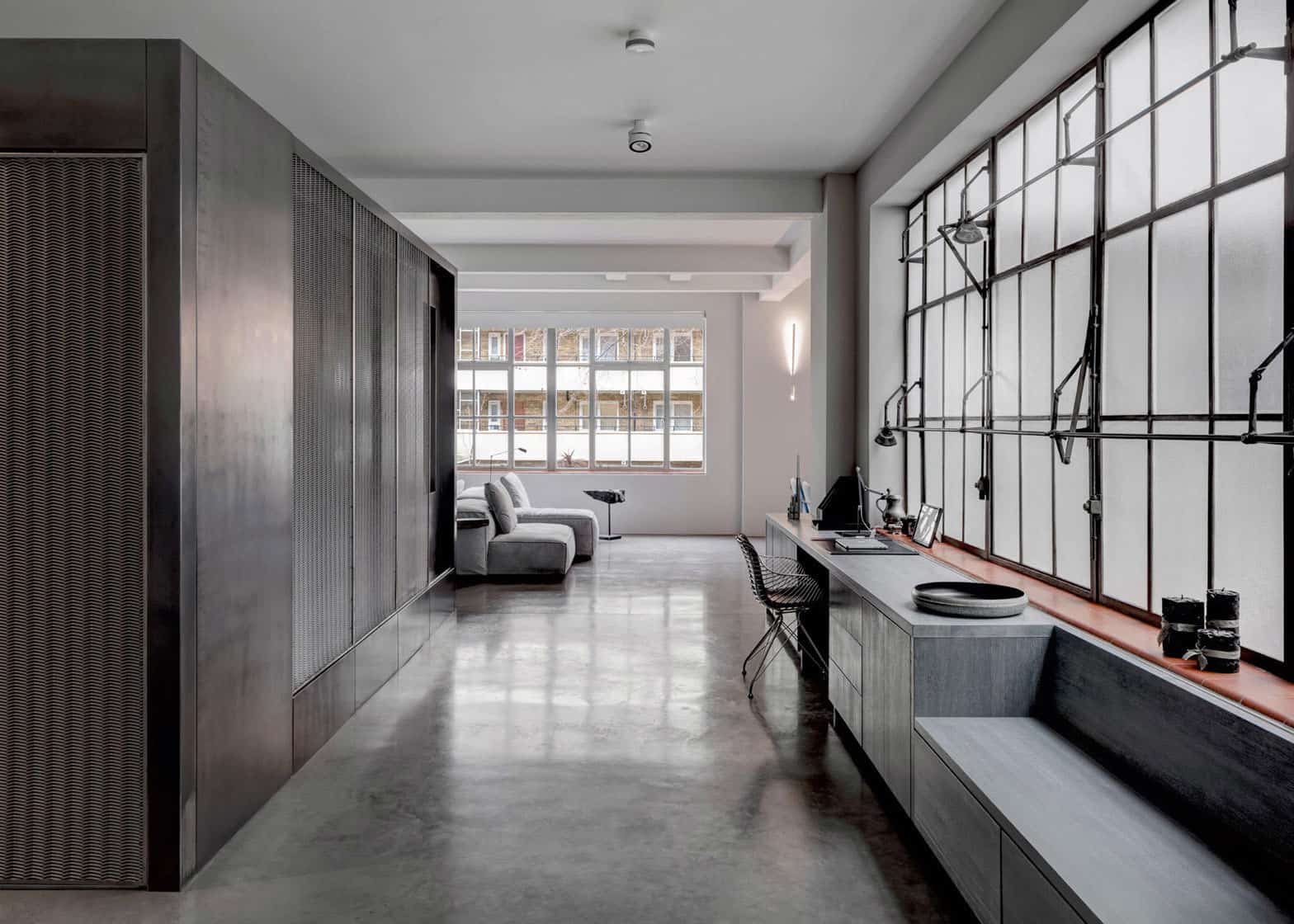 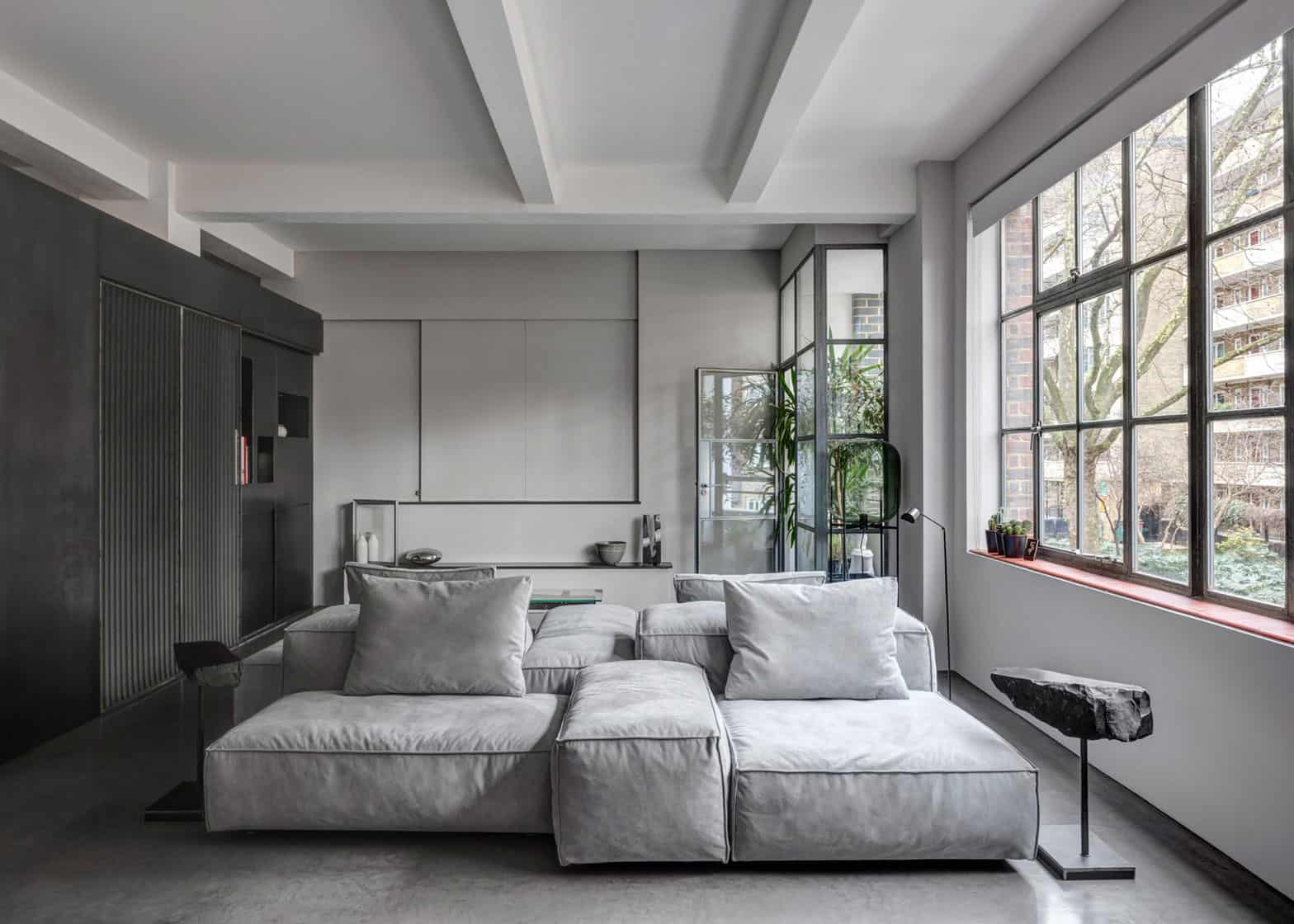 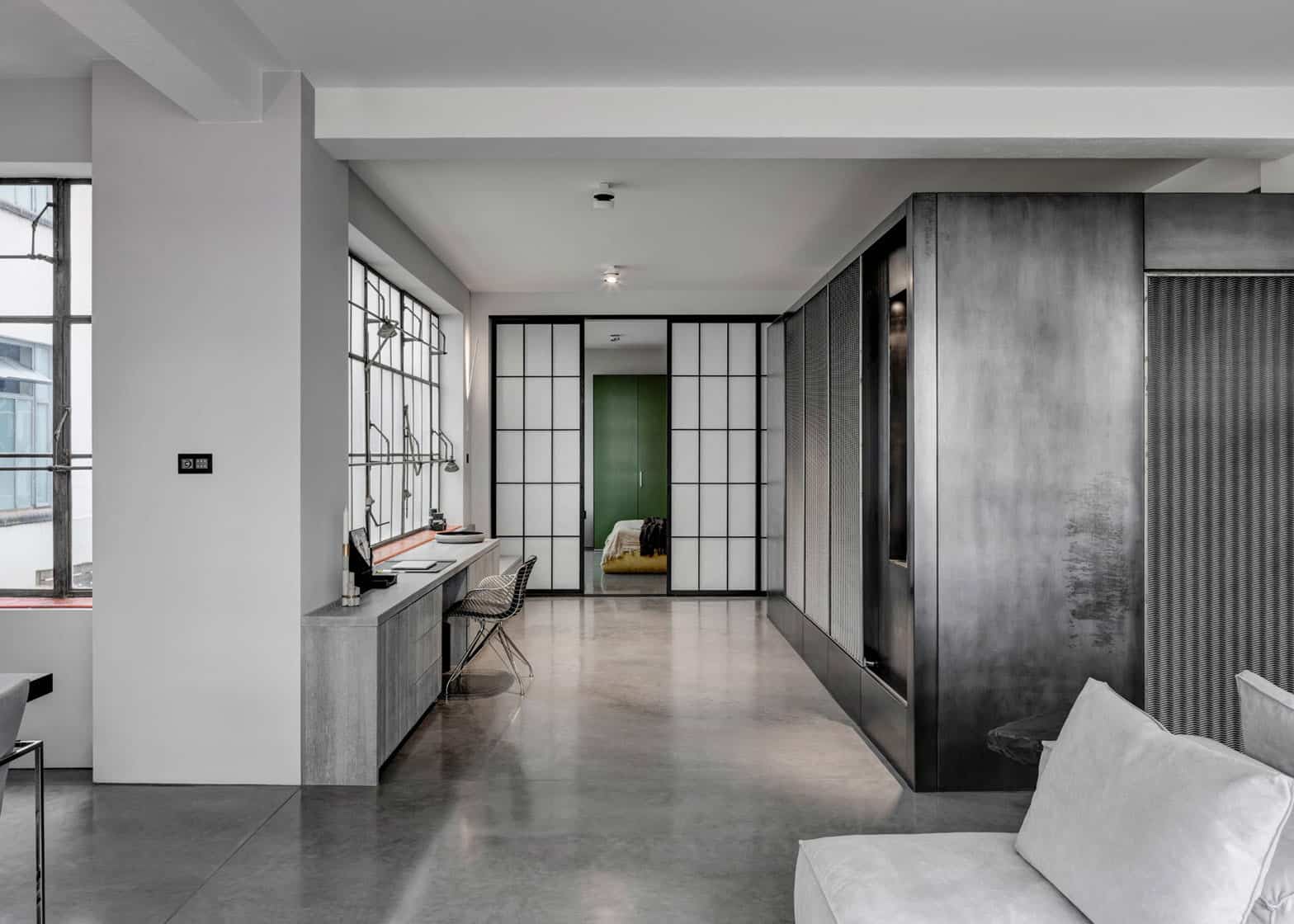 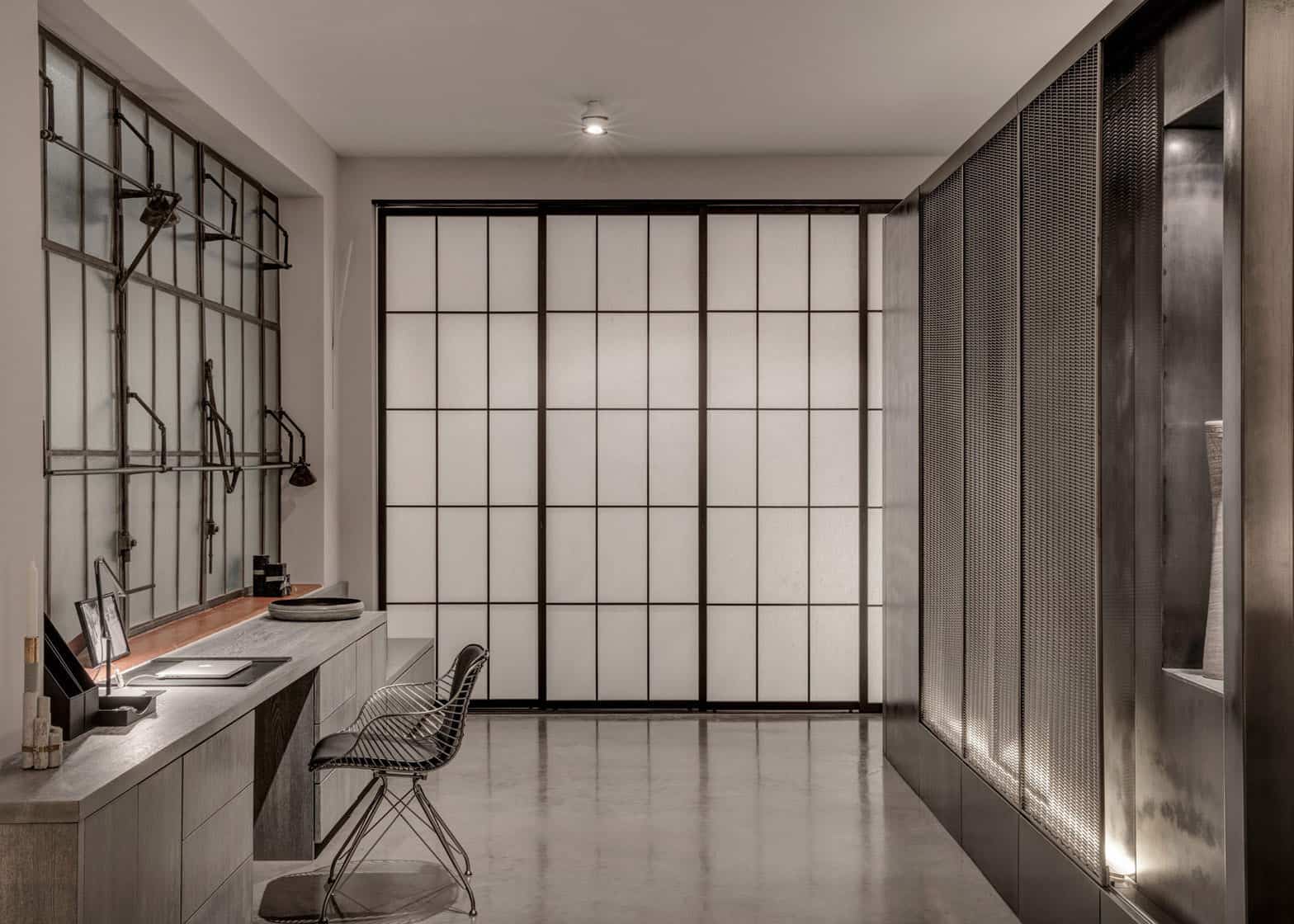 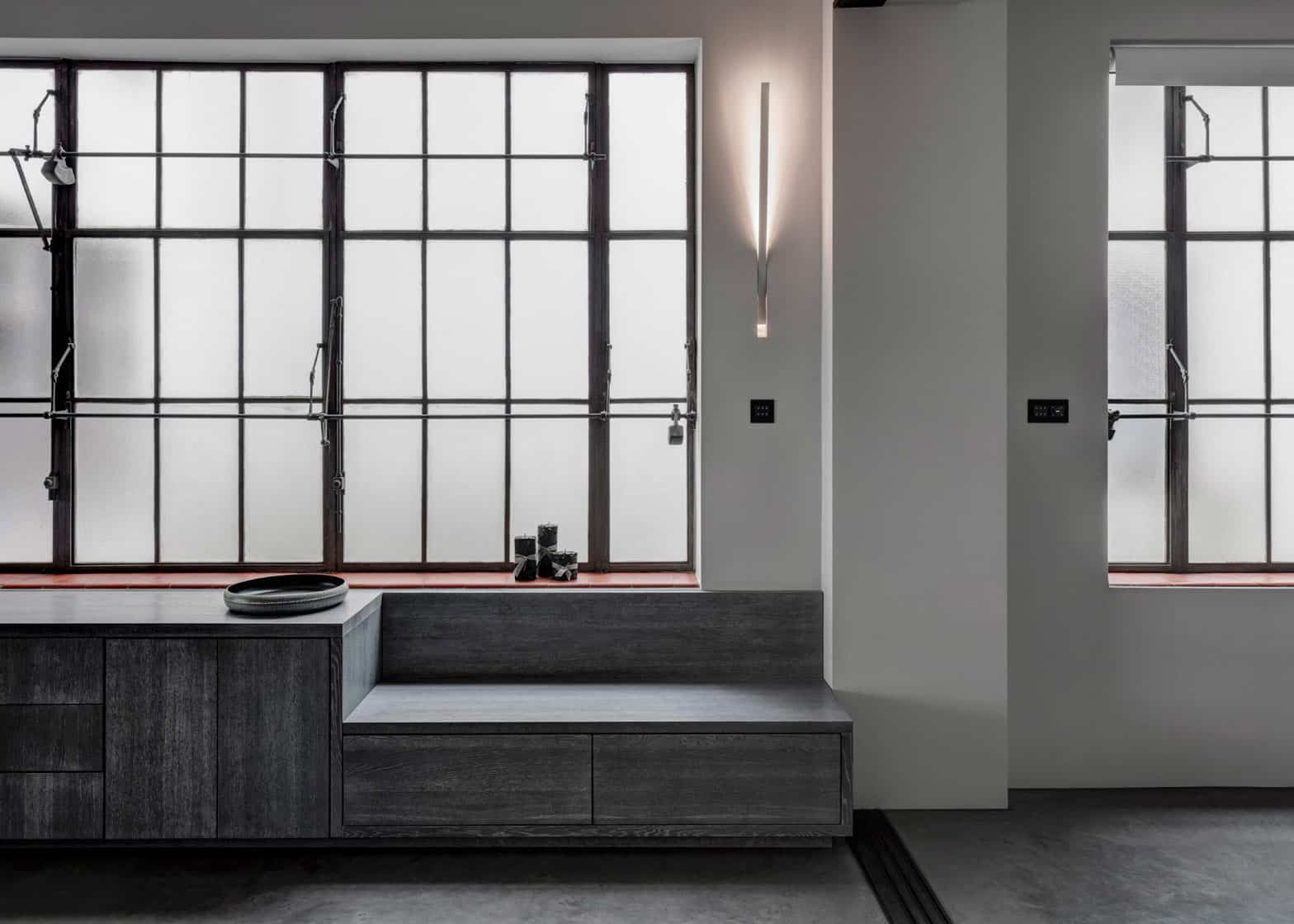 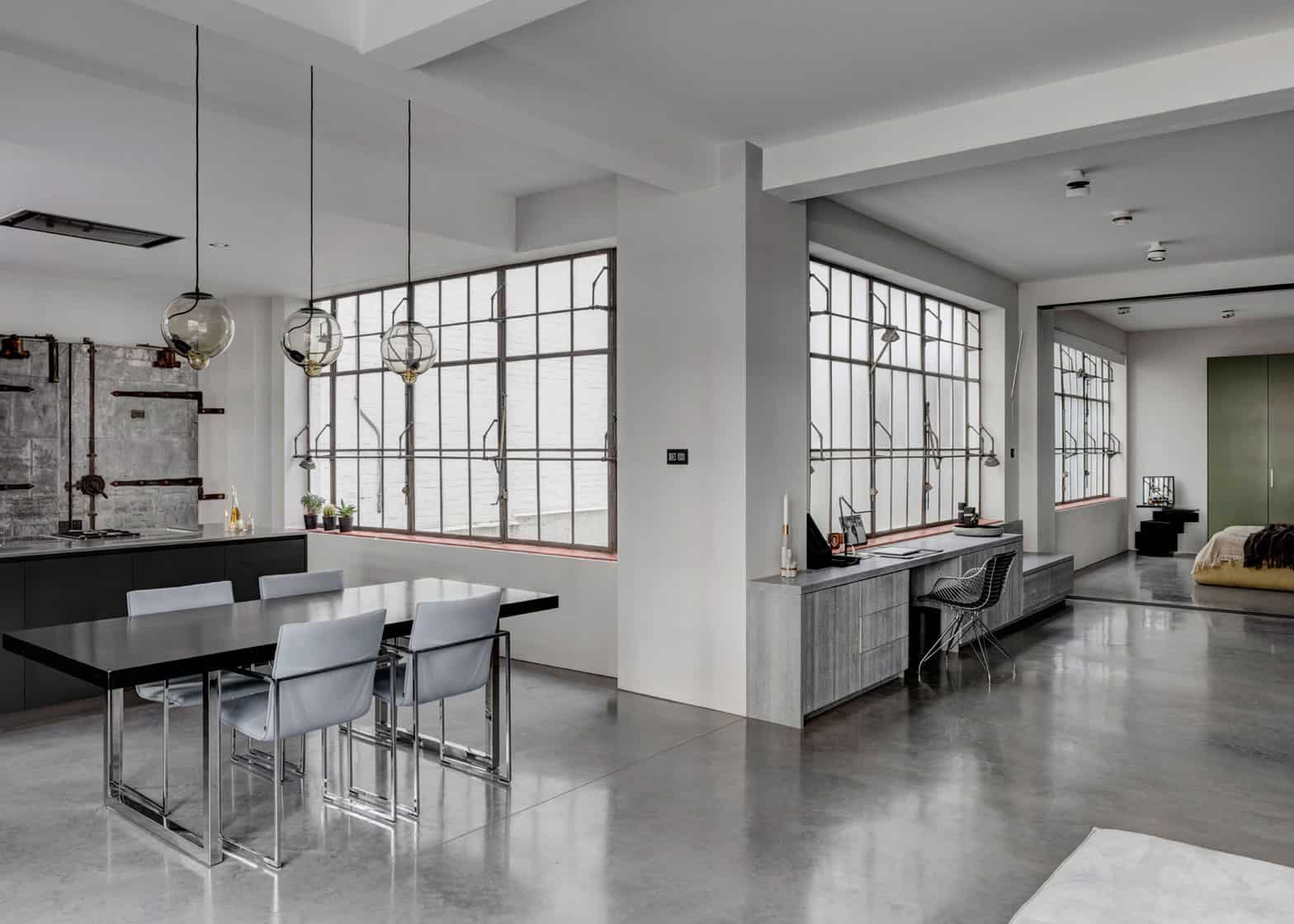 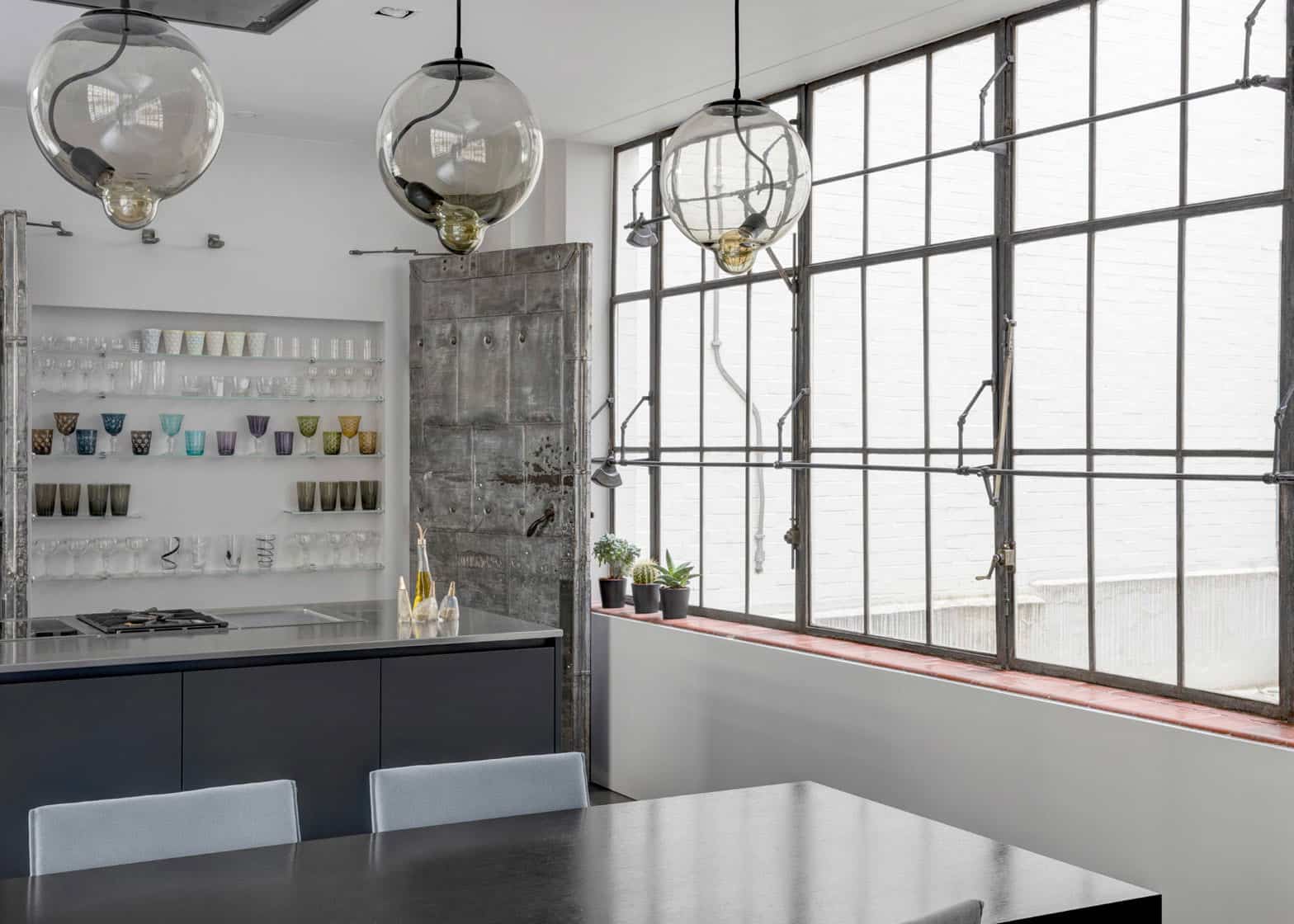 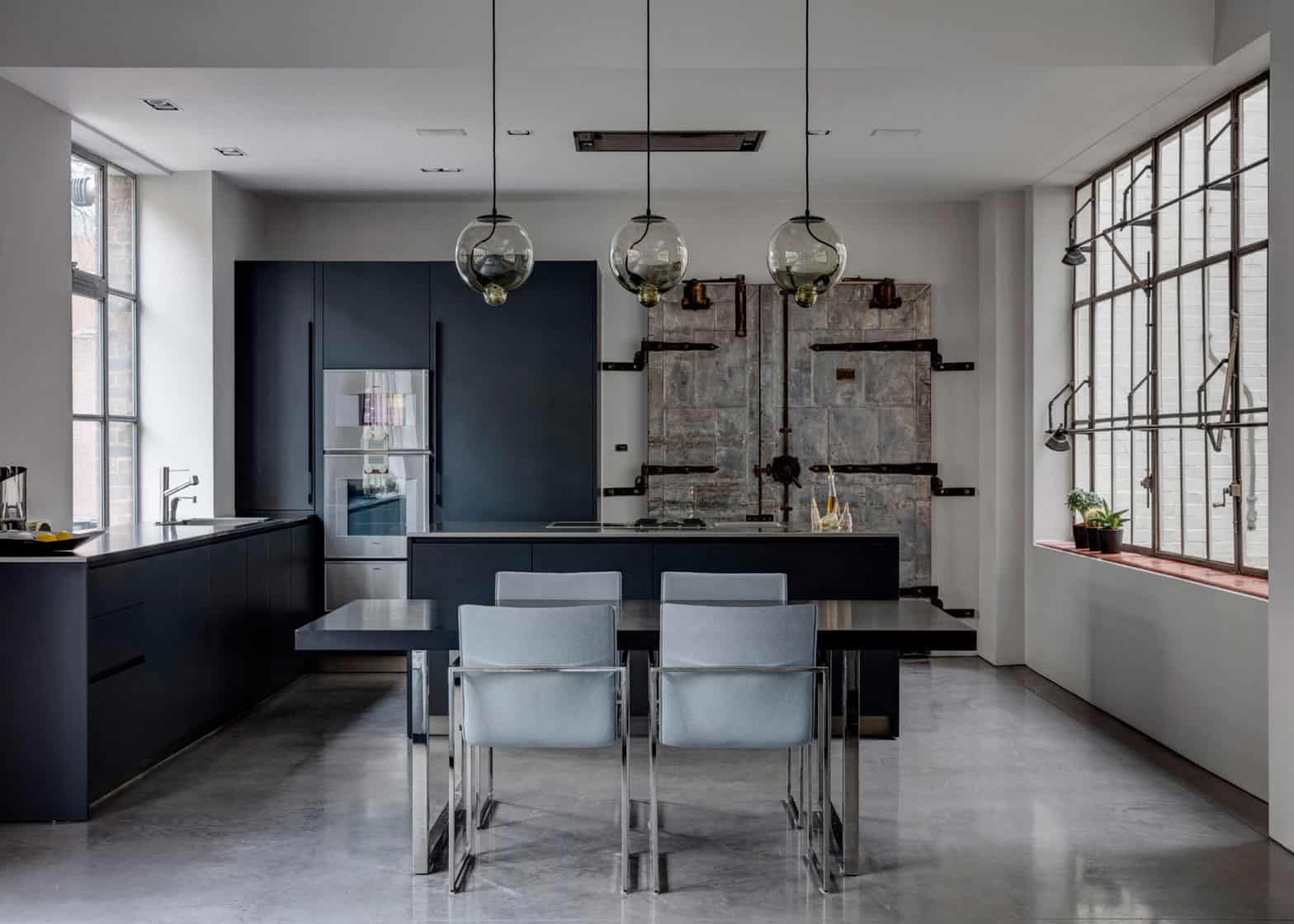 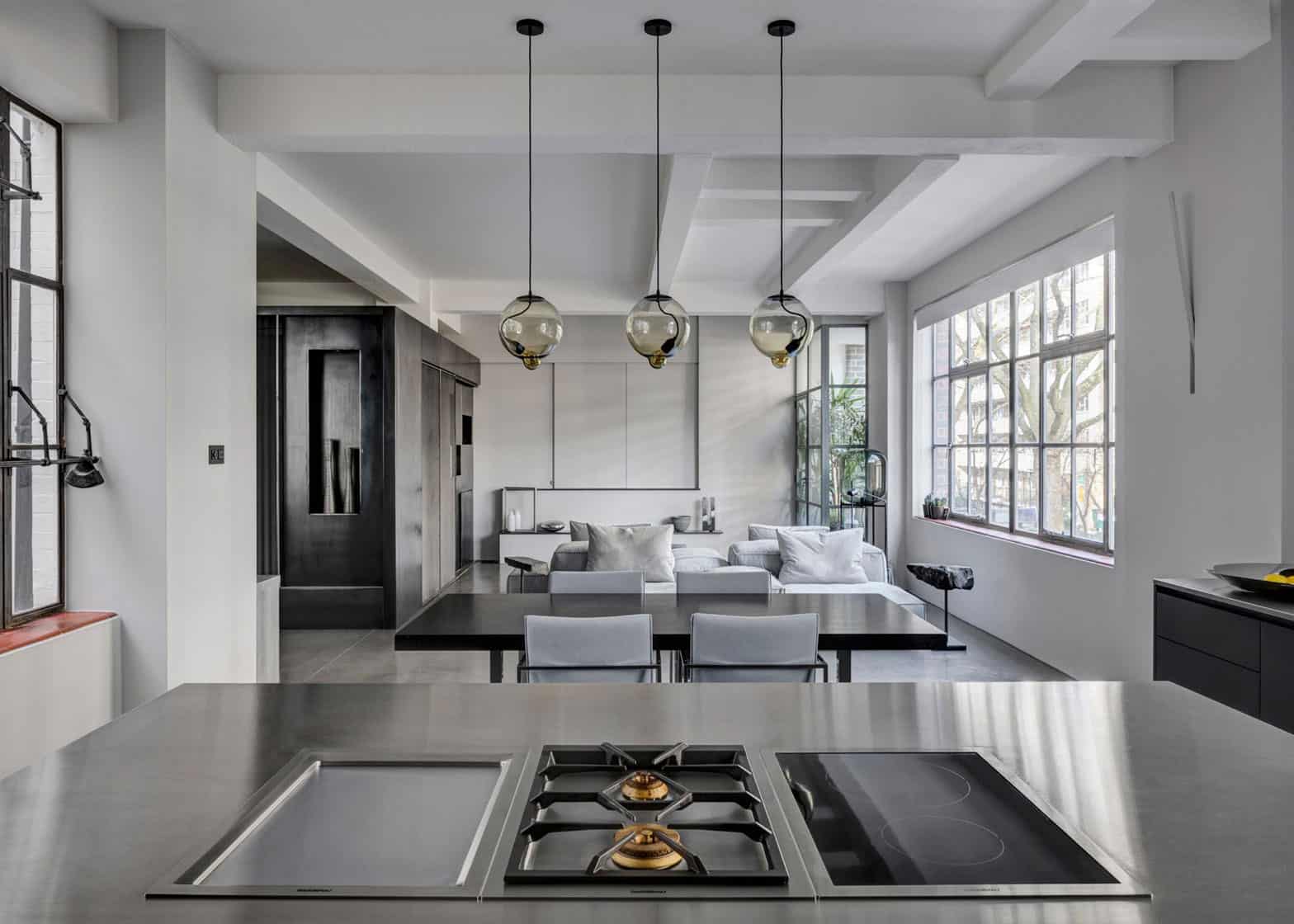 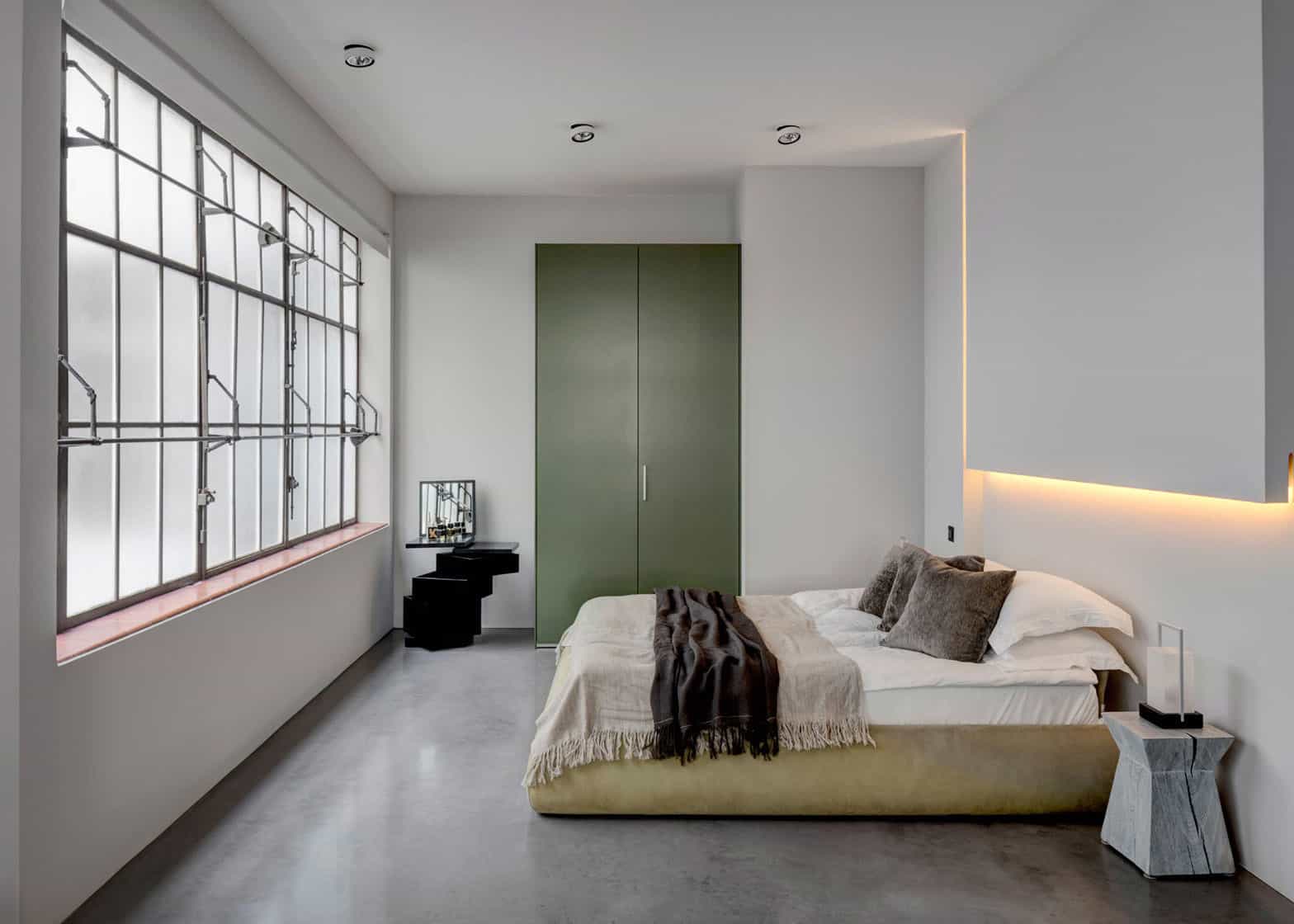 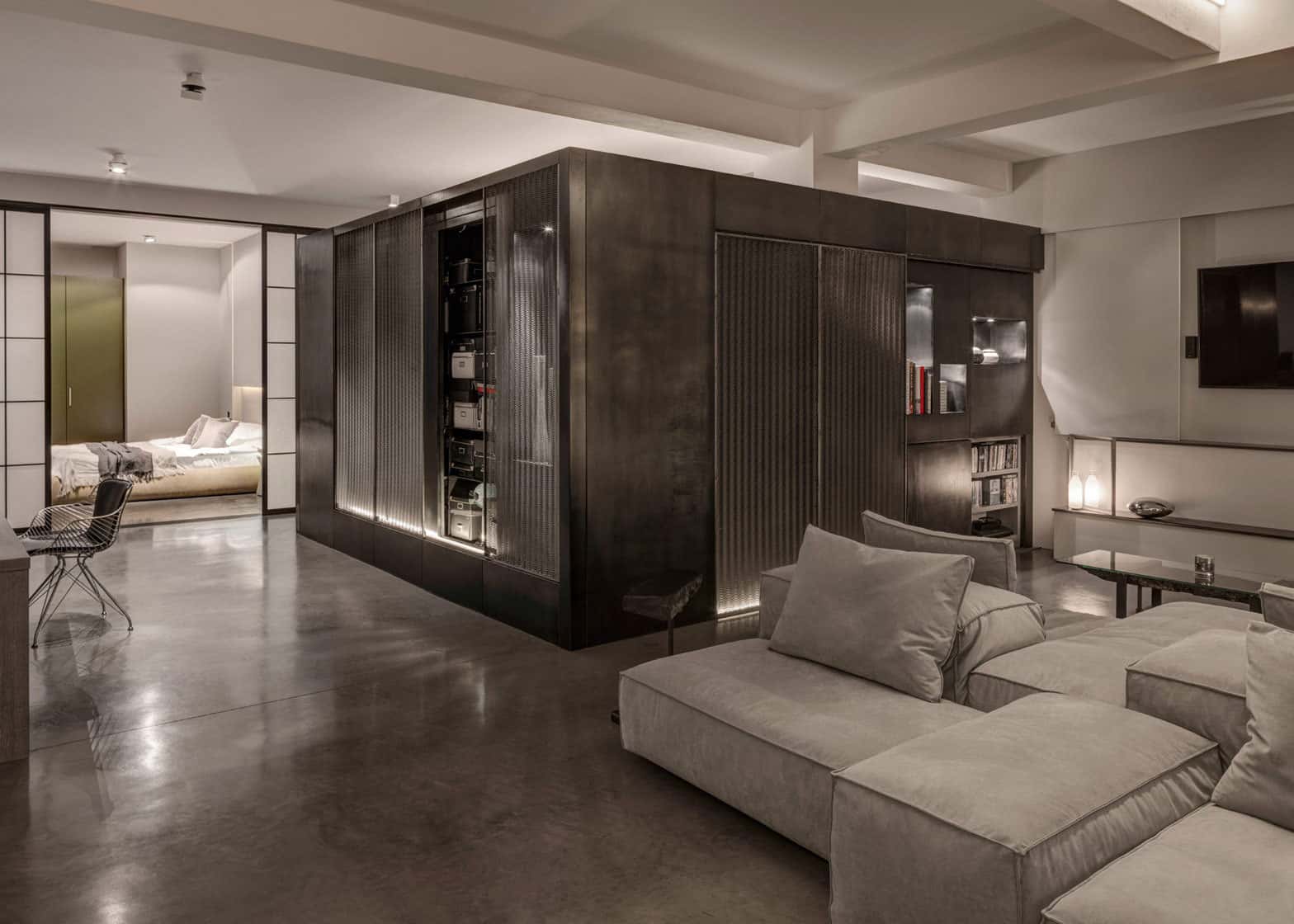 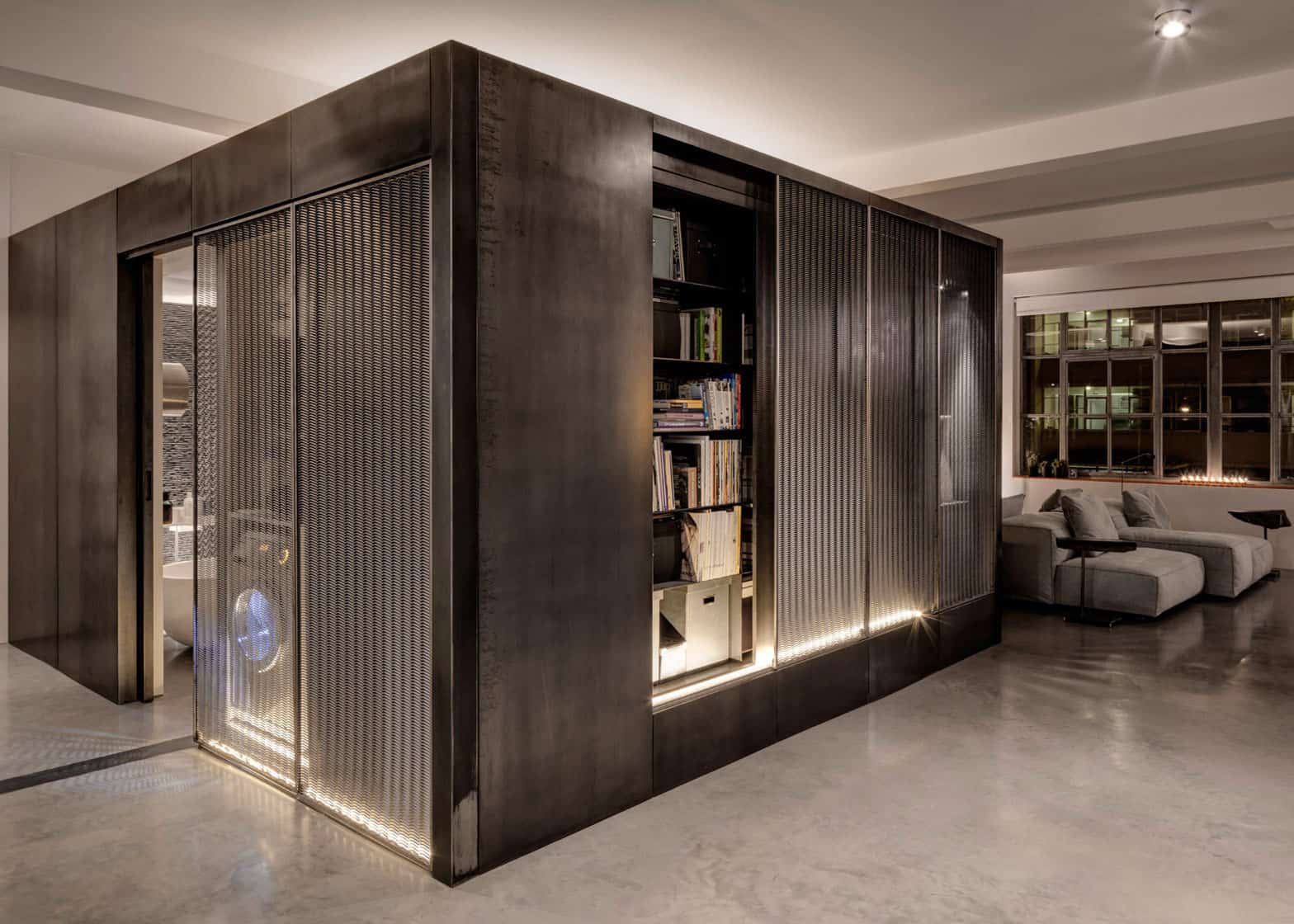 Residence Clerkenwell Apartment is a private residence designed by APA .

It is located in London, England.

“Architecture firm APA has transformed a London warehouse space into an apartment for two theatre and film directors, adding a raw steel volume that houses a movie archive and a bathroom.

Both Ibelhauptaite and Fletcher were drawn to the apartment’s expansive windows, which – prior to the renovation – were partially hidden by the arrangement of rooms. The windows, along with metal fire doors, are the only original details that remain intact.

“The old factory has a roughness, an authenticity, which appealed to Dexter, whose film background supports a love of architecture seen through a lens, in movement,” said the designers. “Dalia’s operatic set-design skills became the design core around which the space was manipulated.”

A black metal cube influenced by the original fire doors was added to the middle of the apartment. This houses a bathroom, film and book archive, and laundry facilities.

Each side of the cube is characterised by a different function. One is for reading and sleeping, another for working, as well as a kitchen space for preparing food and dining, and a living area socialising and relaxing.

“The metal box represents the core of our creative work,” said the clients. “The director always takes the empty black box and with his imagination creates images, stories, sets and architectural pieces within it – an entire material world which in turn is filled with emotional journeys of the characters.”

“That is why the metal box inside the apartment looks quite closed from the outside, but has the ability to constantly change and evolve, never be the same,” they continued.

“It is like a living piece and when you start opening it, you find that it holds a massive amount of films, books, the whole big archive of materials and photos from our films and theatre shows”

The cube also accommodates a bathroom, which the clients describe as “the most important place in the house”.

Throughout the rest of the apartment, a monochrome palette is highlighted by industrial steel blues, rich dark olive greens and unexpected textures.

The choice of materials and furniture are inspired by the couple’s family histories and journeys they have made together, including solid oak shelves, black ash screens, and mountain-climate blankets.

“Before world war two, Dalia’s grandfather had a wood factory, which made matches and wood planks in a small Lithuanian town,” said Fletcher.

“When the Russians occupied Lithuania and it was incorporated into USSR, that factory was the main reason to send Dalia’s grandfather and his nine children to Gulag in Siberia for eight years of hard labour camps.

The main wall in the bathroom is covered in textured tiles, which were sourced from Japan.

Japanese shoji screens dividing the bedroom were custom-designed to echo the pattern of the windows. At night, light shining behind the translucent screens gives the apartment a cosy feel. Shoji screens are similarly used to divide the spaces inside a studio and showroom for a landscape architect in Japan.”