Home » House » A Stunning Private Residence in the Cyclades

A Stunning Private Residence in the Cyclades

Farangas I is a private residence designed by React Architects.

Completed in 2010, it is located in Paros, Greece. 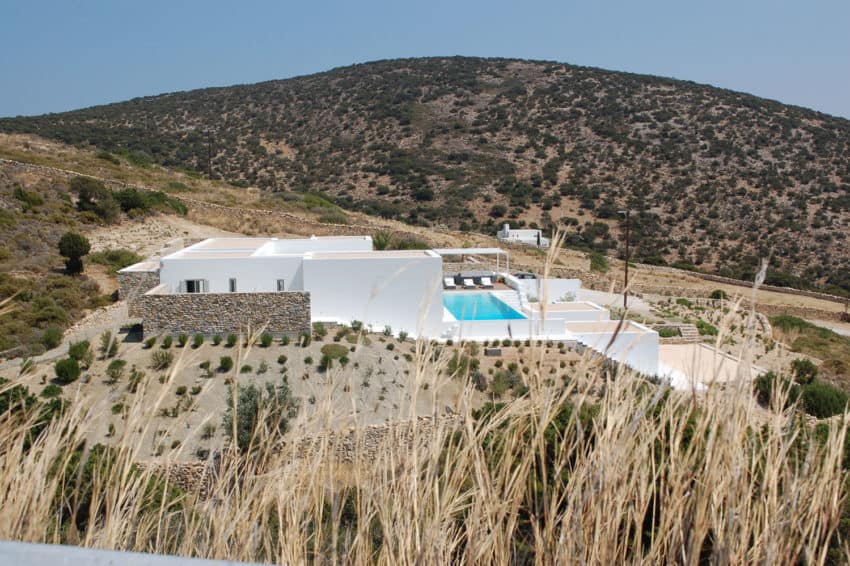 Farangas I by React Architects:

“The plot is located at the island of Paros in the Cyclades. It has orientation in the big side South-western with view to the sea. The project concerns a summer house with hostels and a pool. The place of the residence is to benefit of the view to the Aegean Sea. The houses volumes are placed on a Π shaped layout with a central courtyard as according to traditional prototypes. The central courtyard organises the operations, creating a central core in direct report to the uses around it.

Using the elements of the Cycladic Architecture, we designed a building that is adjusted to the landscape, split in different levels. In this way the adaptation of the building to the landscape is harmonious and the volume of the central residence is the least possible.

The building from the eastern side is almost entirely adjusted to the ground. The architecture is subjugated in the landscape and at the same time is using the intense Cycladic light to elect a particular morphology using as background the arid landscape and the endless blue.

The house has references in the archetypal models of dwelling, with a modern certain output. In the interior the lack of bisector walls and the complete absence of elements such as curtains that would hide the light create a disposal of absolute freedom.

Built by simple materials, plaster in white colour, floorings and bathrooms by poured material, the house is distinguished by austerity and simplicity in lines. The water and his light blue sense are present with the swimming-pool, around which exterior spaces unfolds and views to the west and the sea. A space that submits its own pace, dictated by the light and air depending on the day and the season.”

Cometa Architects Design a Private Residence in the Cyclades

Moustroufis Architects Create an Addition to a Stunning Private Residence

A Stunning Private Residence in the Azpitia Valley in Peru

The Wave House by A-cero Architects in Dominican Republic