Home » House » Angular House GM in Chile designed by EXTCO to work with the local topography, instead of against it

Angular House GM in Chile designed by EXTCO to work with the local topography, instead of against it 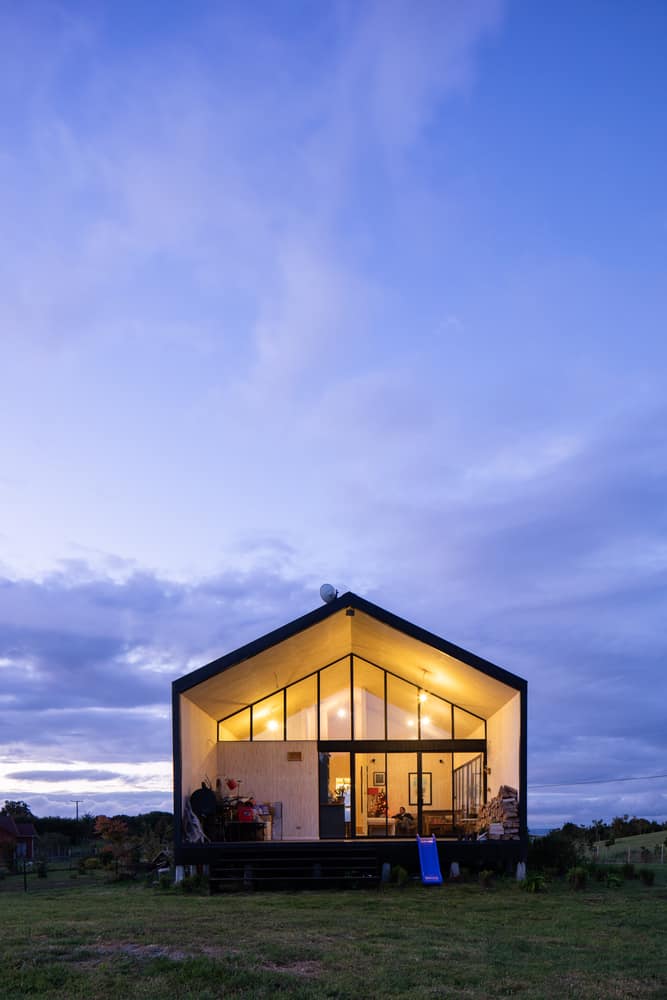 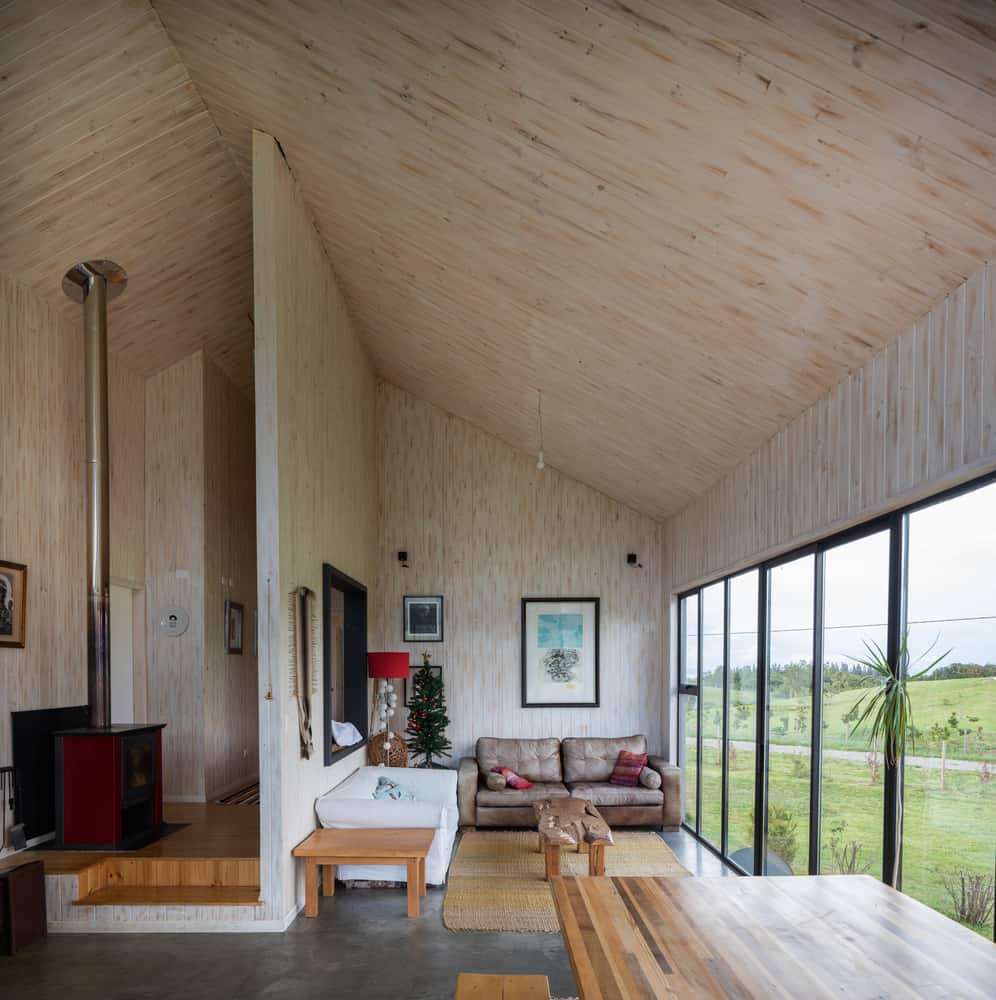 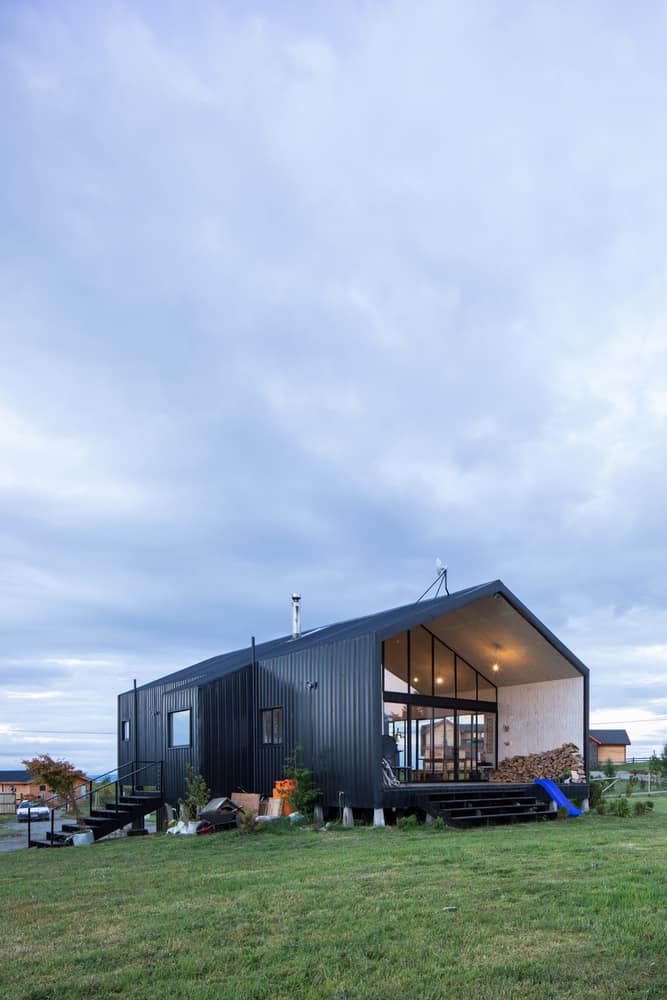 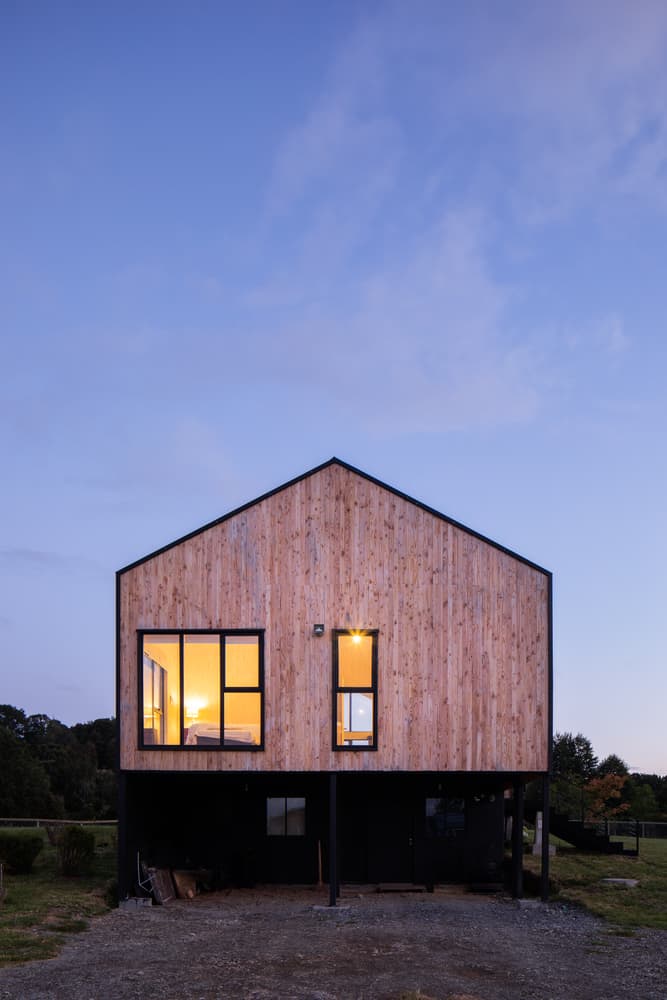 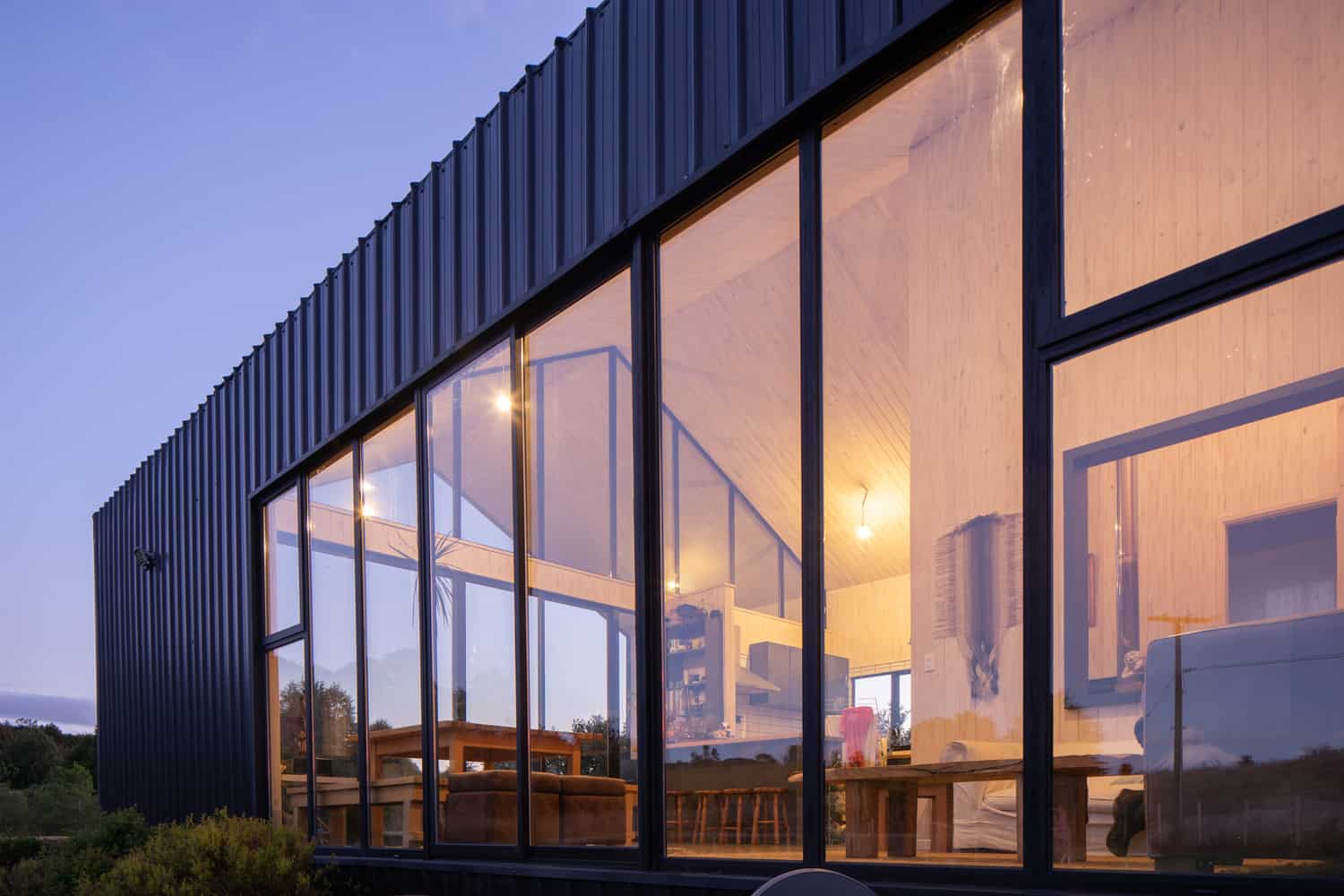 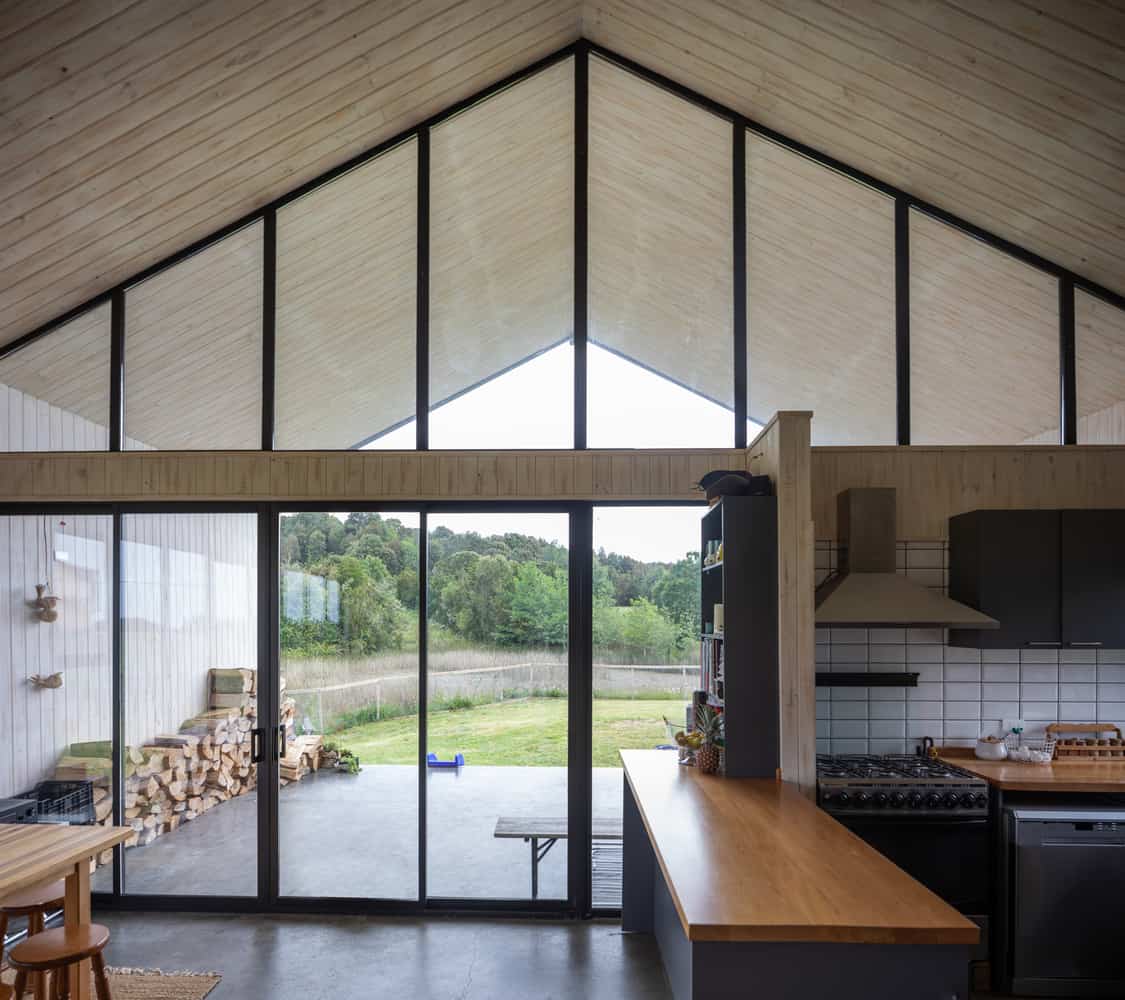 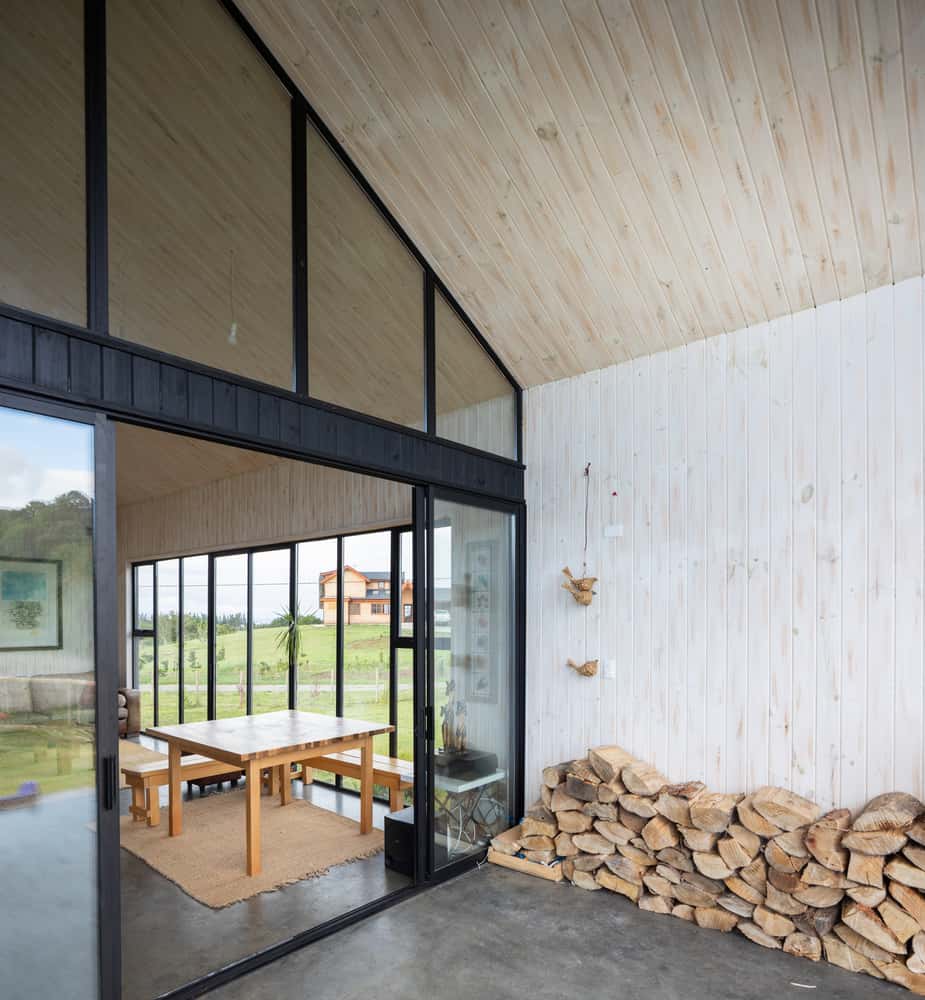 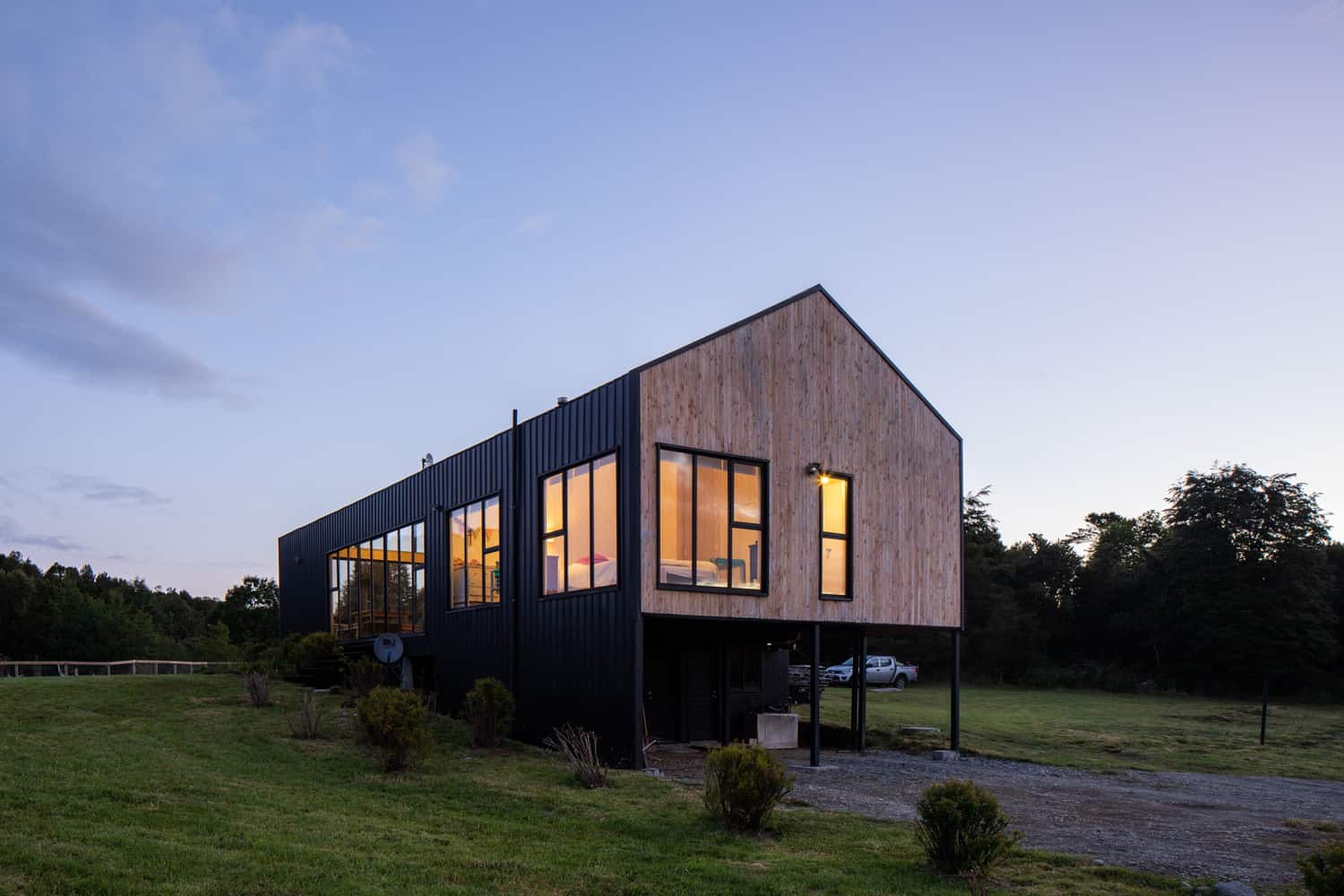 In the rolling rural area of Puerto Varas, Chile, the stunning House GM, which is just as angular and decorative as it is solid and comfortable, was recently completed by cutting edge design teams at EXTCO.

Technically,  the area that the house actually sits in is part of a city. Because it sits on the outskirts, however, the atmosphere is a little more rural and country inspired, which is part of the reason for the home’s unique shape and foundation. The land rolls and dips in several places but designers wanted to build something that interrupted the natural habitats there as little as possible, so they chose a structure that works with the landscape instead of digging into it.

The shape and materiality of House GM was also chosen in part to account for the fact that it is located in an area know for being quite rainy and humid in terms of climate for most of the year. This particular spot also typically experiences high winds, so there was quite a large need for a solid foundation and strong material choices. Making these decisions as also influenced by the fact that the project had a relatively low budget and required cost efficient choices wherever possible.

To keep the house level across uneven land, it was built raised slightly on stilts, like a wooden deck but all throughout. In some places the stilts are very short and the house sits low to the ground, while in others it looks as though it is raised very high up. This keeps the interior floors and the deck space surrounding the outside of the exterior even for walking on and furnishing, while letting the land slope below the only available spot to fit an entire house relatively uninterrupted.

In this way, the structure of the house provides quite a lot of visual appeal without even really trying to be decorative. So does the way floor to ceiling windows are featured in each end of the house to keep it well and naturally lit with sunlight, but decks and those same windows are simultaneously shaded from wind and rain by large alcove style overhands in the peaked roof.

The way the roof itself peaks upward, standing so tall in its solid frame made of reclaimed local wood throughout the interior and exterior, is more than just nice to look at; it’s also an homage to the typical architectural style of the area. Designers added a few extra, super fun touches to the outside to make it stand out, though. For example, a kids’ slide hooks to the edge of the deck at one end, letting dwellers slid down from the raised portion of the house rather than just using the stairs. These neat, modern details create a cool contrast with the seemingly rural wooden style and cultural shape of the rest of the house.

Because the house was built for a busy young family, the layout of its interior was pegged as needing free flow and open spaces that are good for moving between rooms, communicating, and bonding. The light shades (primarily white and light, natural wooden colours) of the interior decor scheme contrast well with the darker wood of the facade outside, making the rooms feel like and airy in combination with those lovely big windows we mentioned earlier. This helps the atmosphere stay cheerful during long, grey days of rain during certain seasons.

At the same time as the light interior benefits the family, the dark exterior does as well! In certain places, black plates have been place to absorb as much heat as possible from the day’s sunlight in order to keep the house’s temperature regulated as well as possible, making the house more green and less reliant on mechanical heating and cooling systems.

In the event that a chilly day means the black insulation plates aren’t enough, the family can gather around the central wood burning stove that sits in the middle of the primary social space. Besides looking fantastically decorative in a sort of locally rustic way (you might notice the lumber piled on the deck to keep the stove running adding a particular character to the outdoor space as well), this piece also heats the inside from the centre outward whenever necessary.