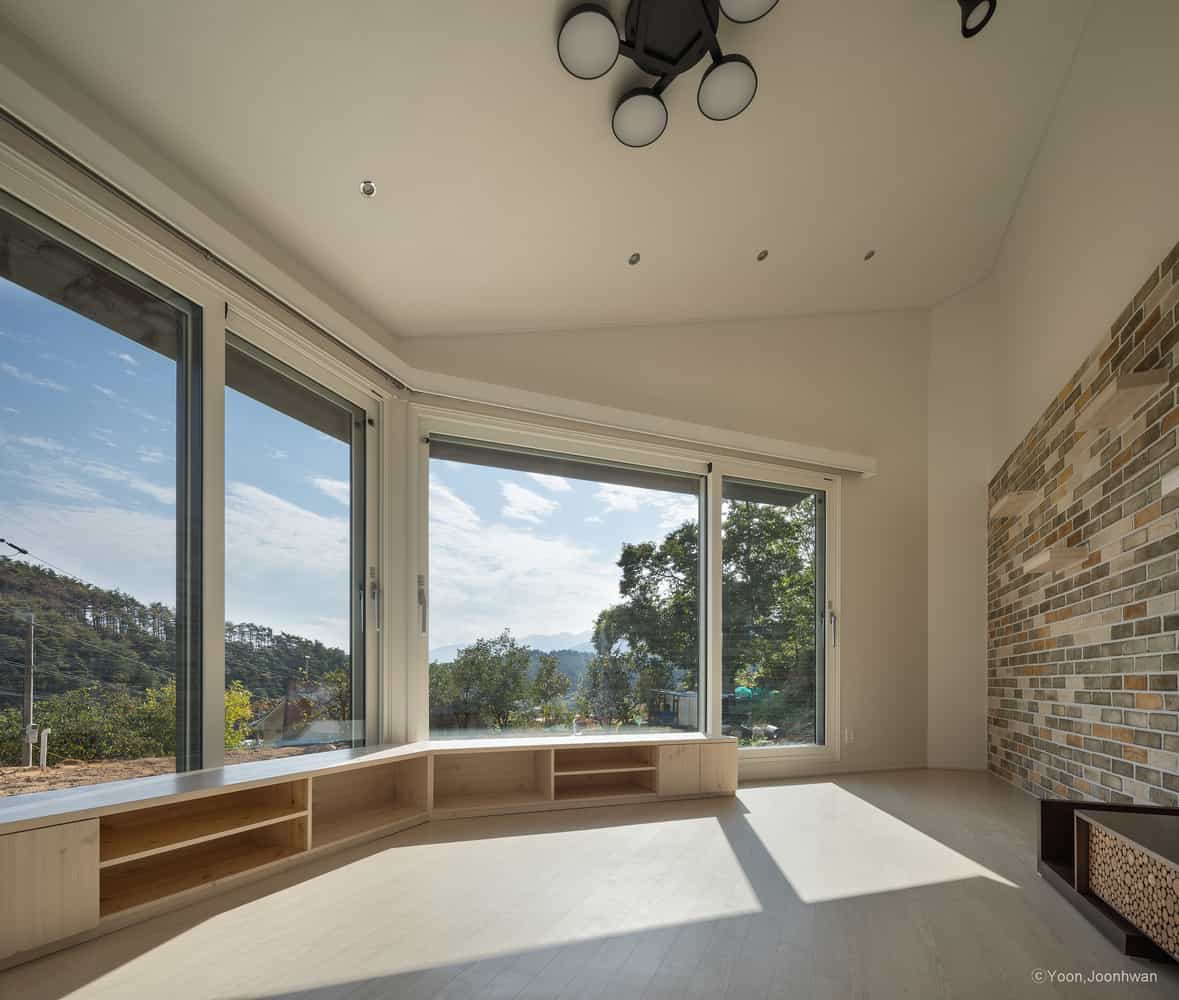 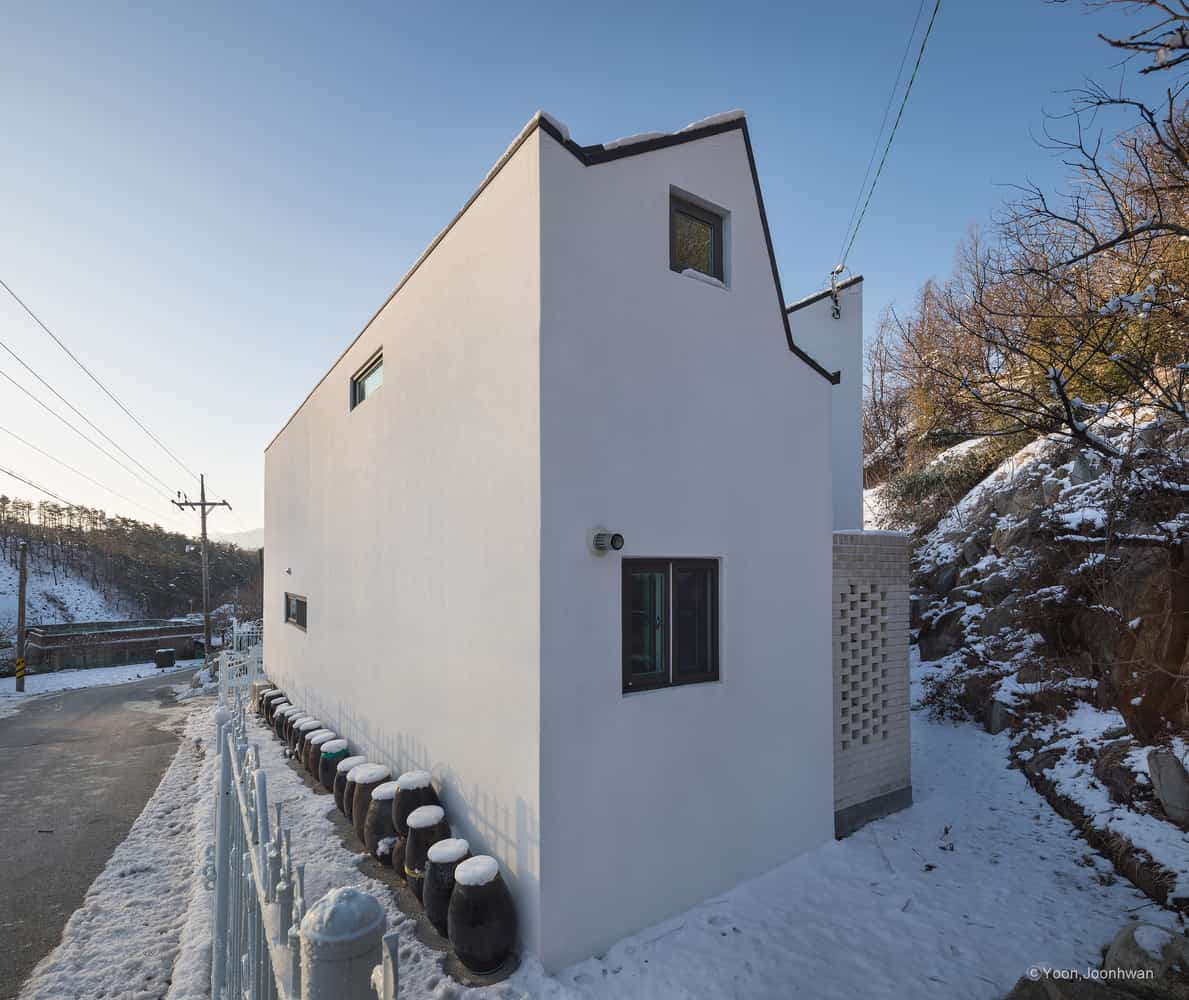 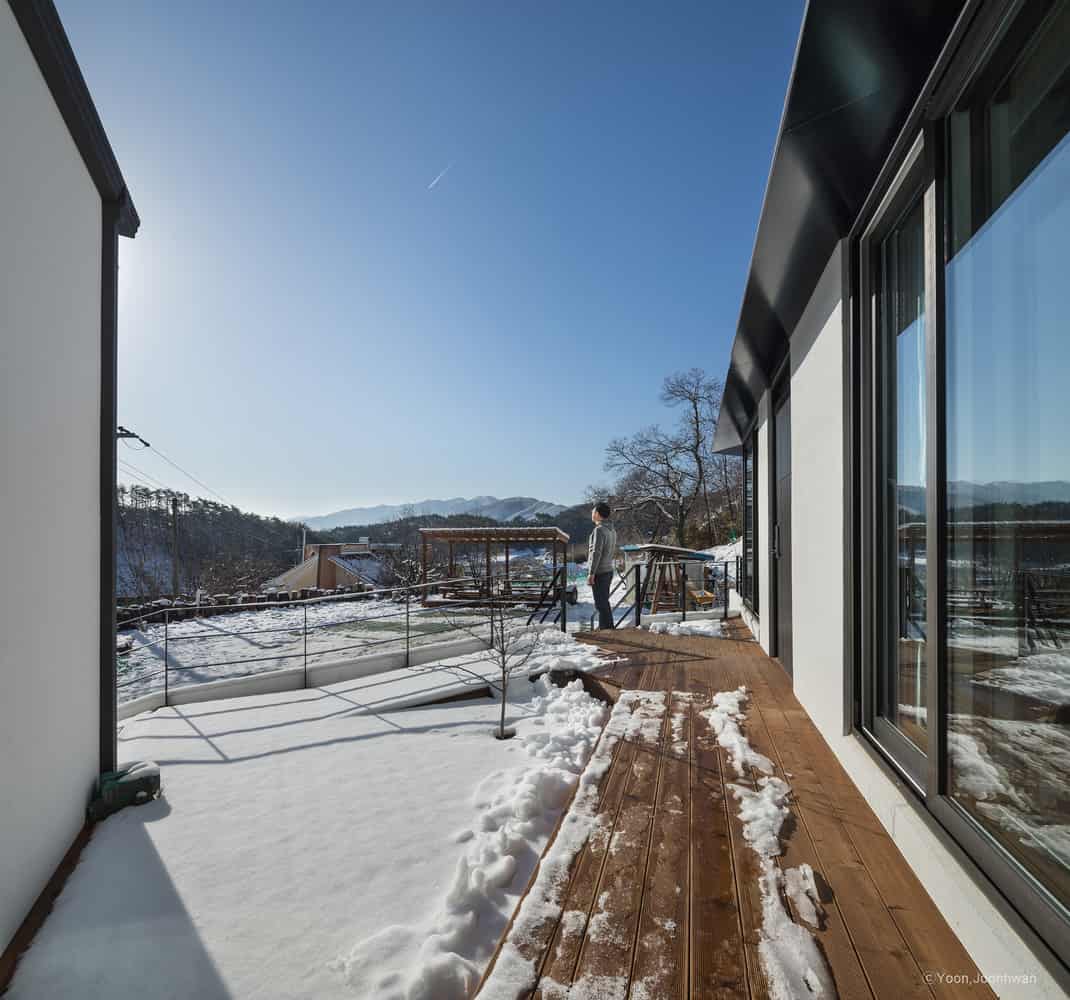 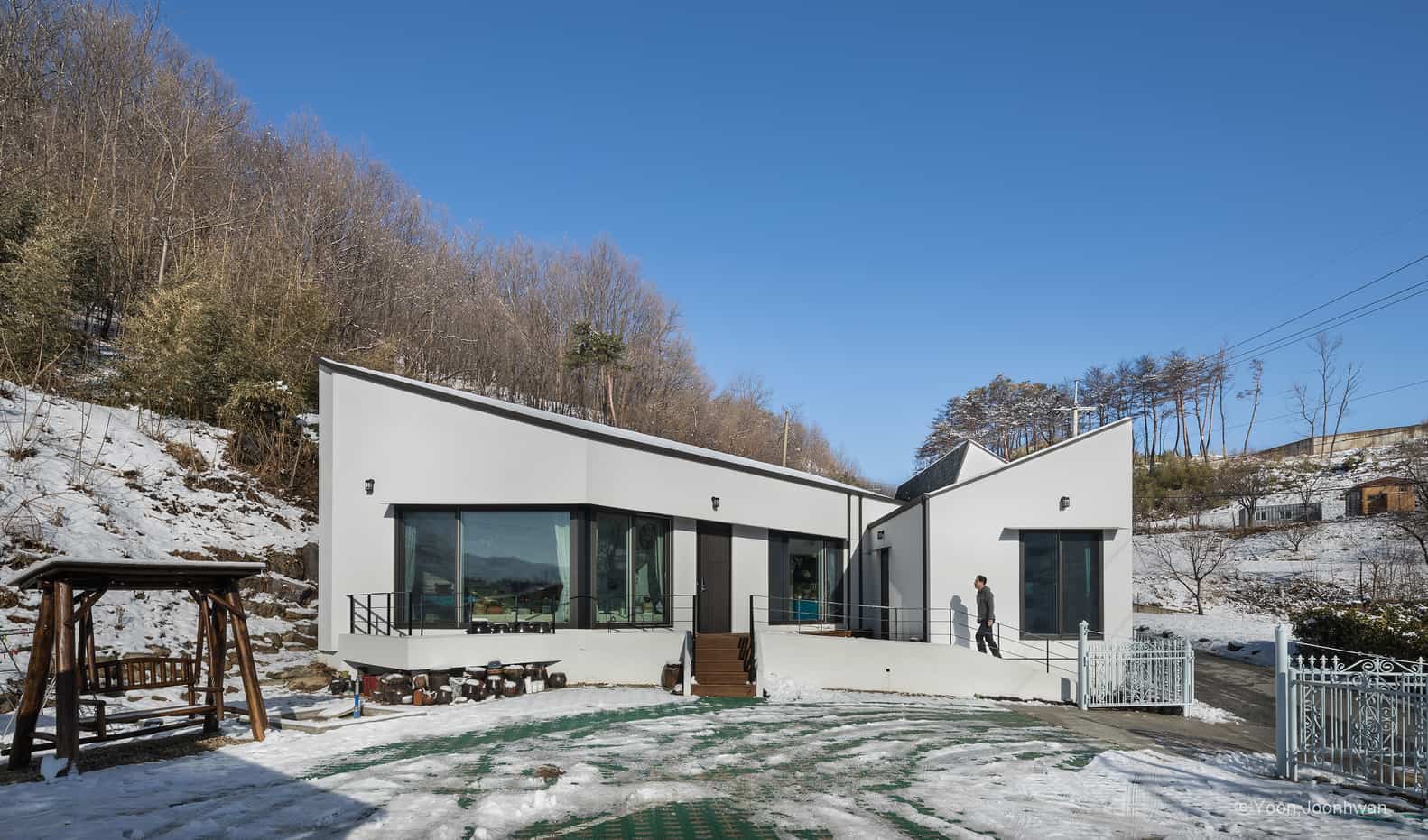 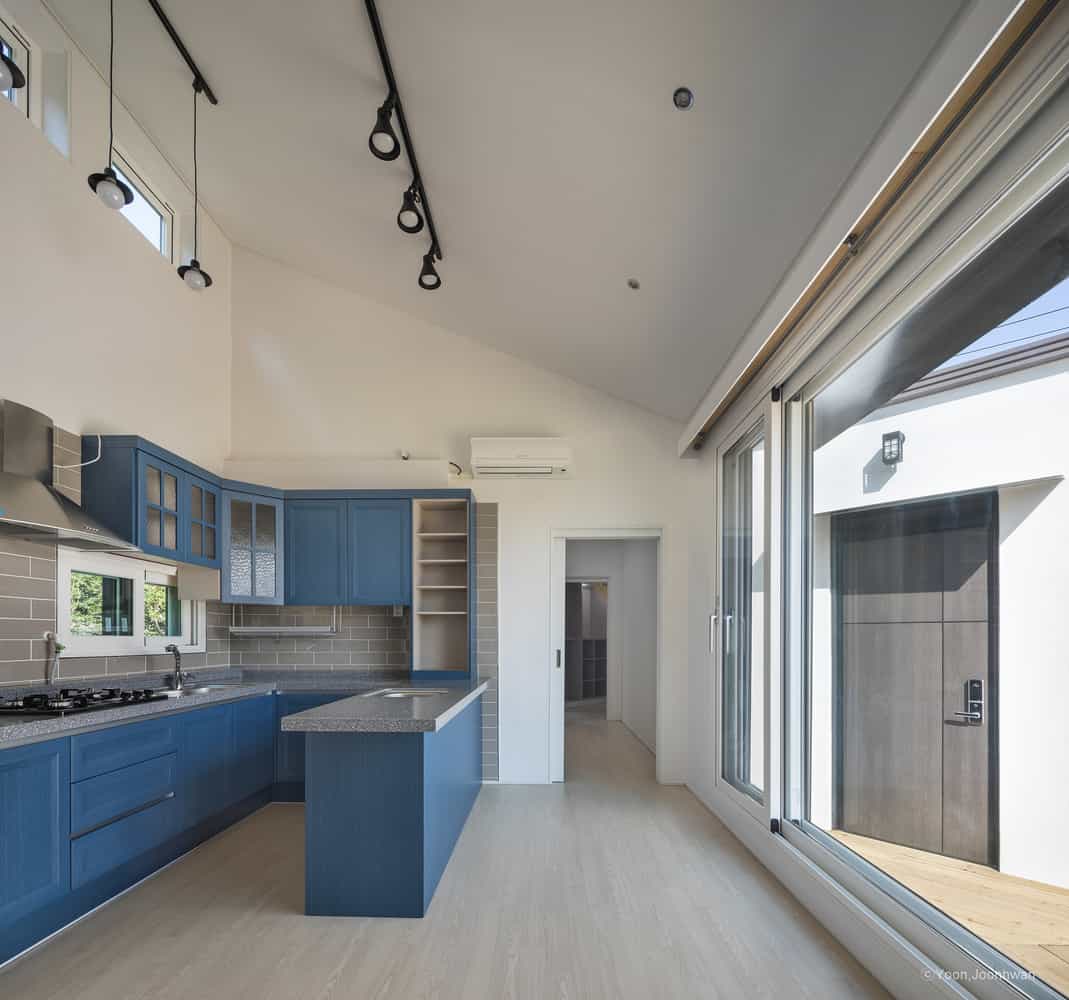 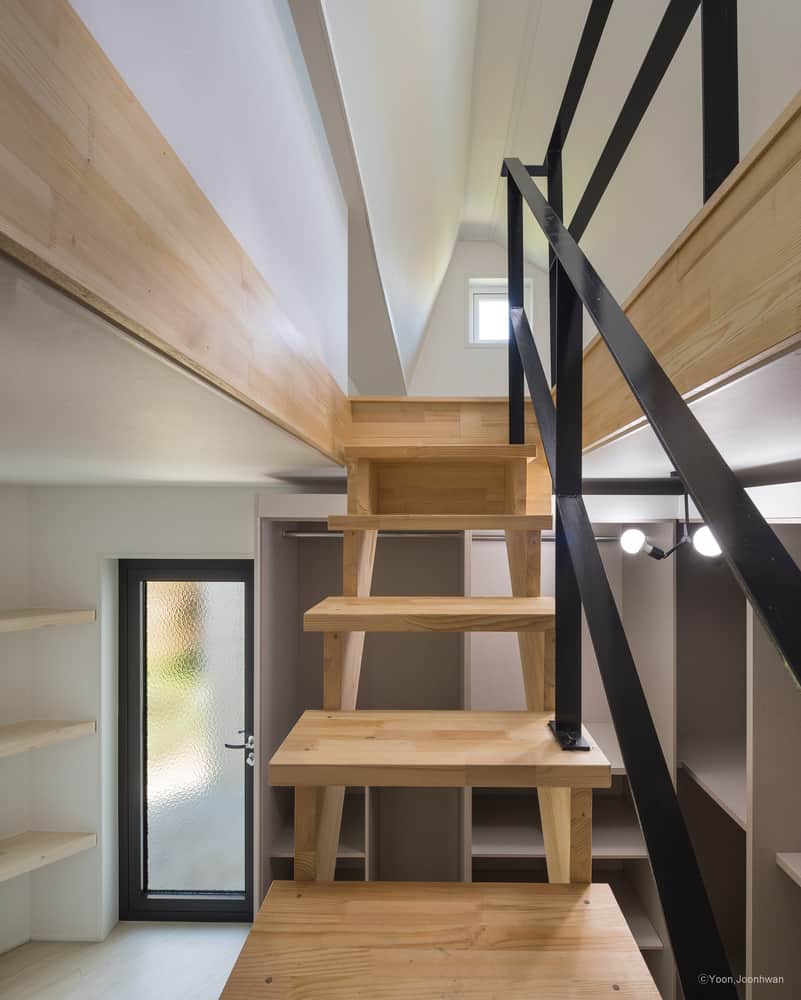 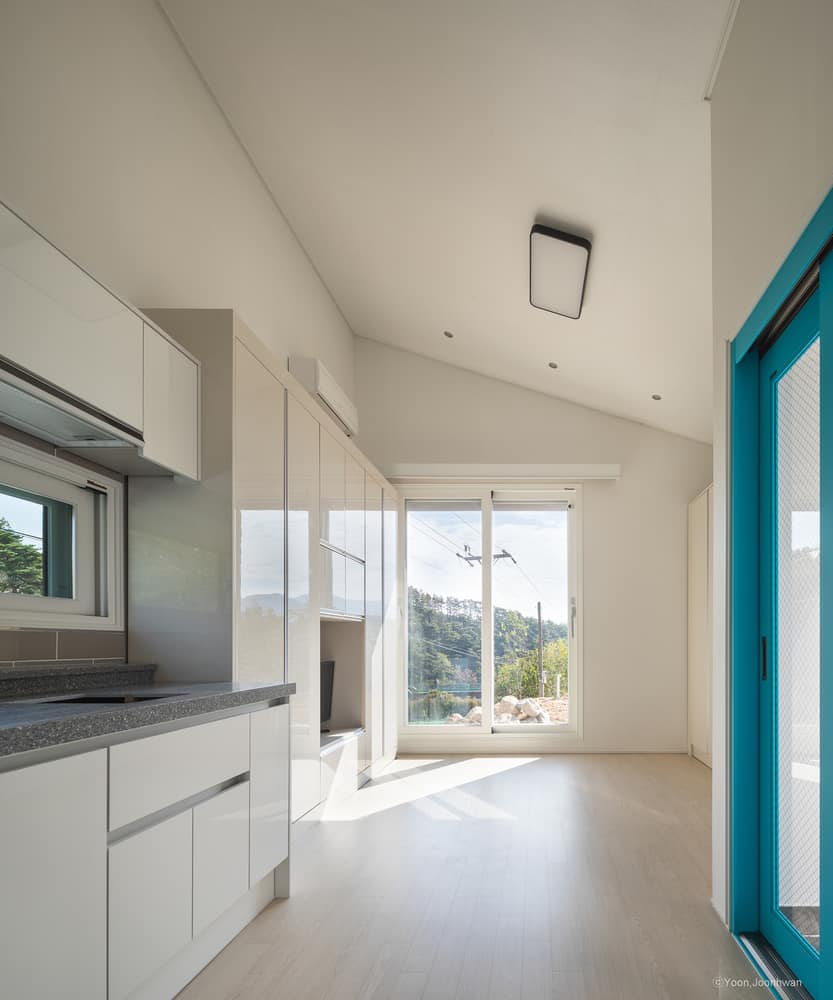 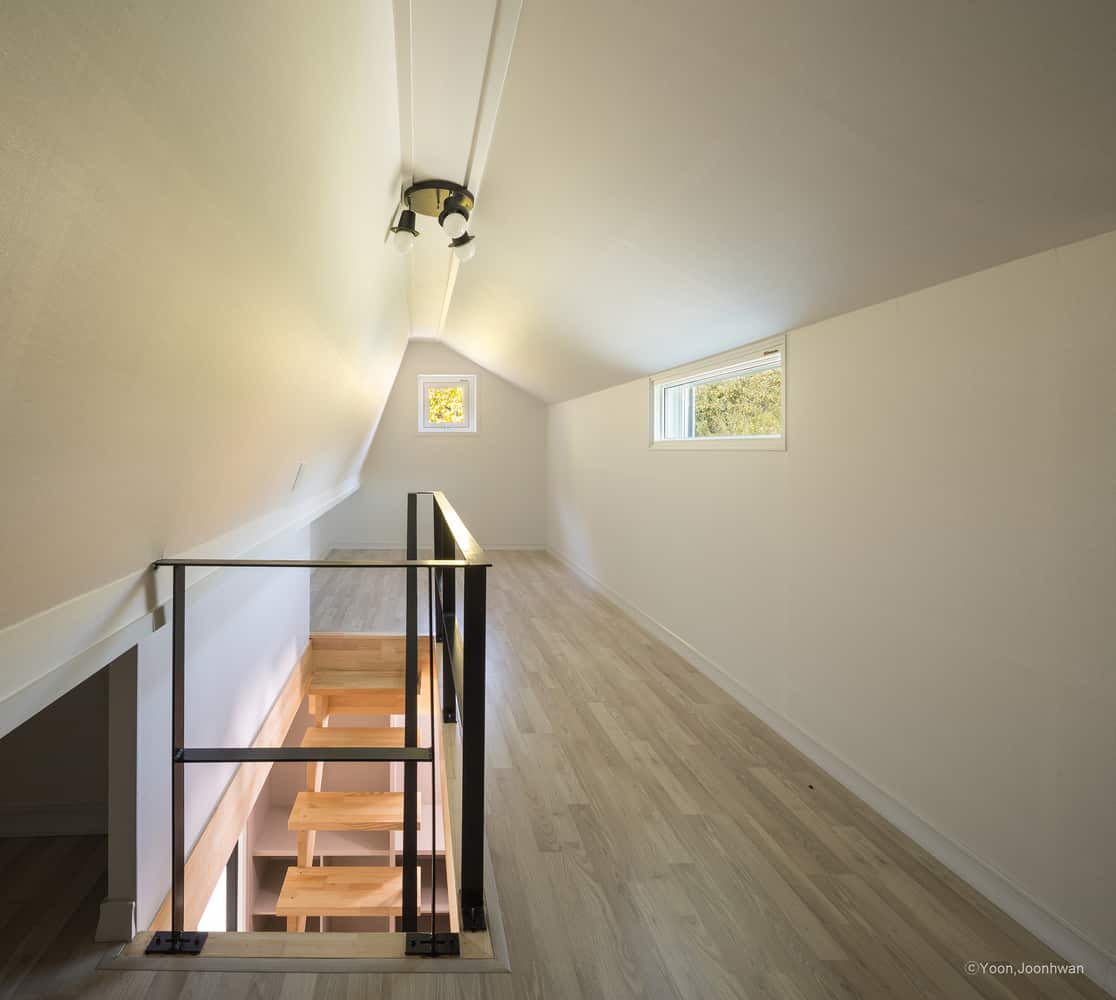 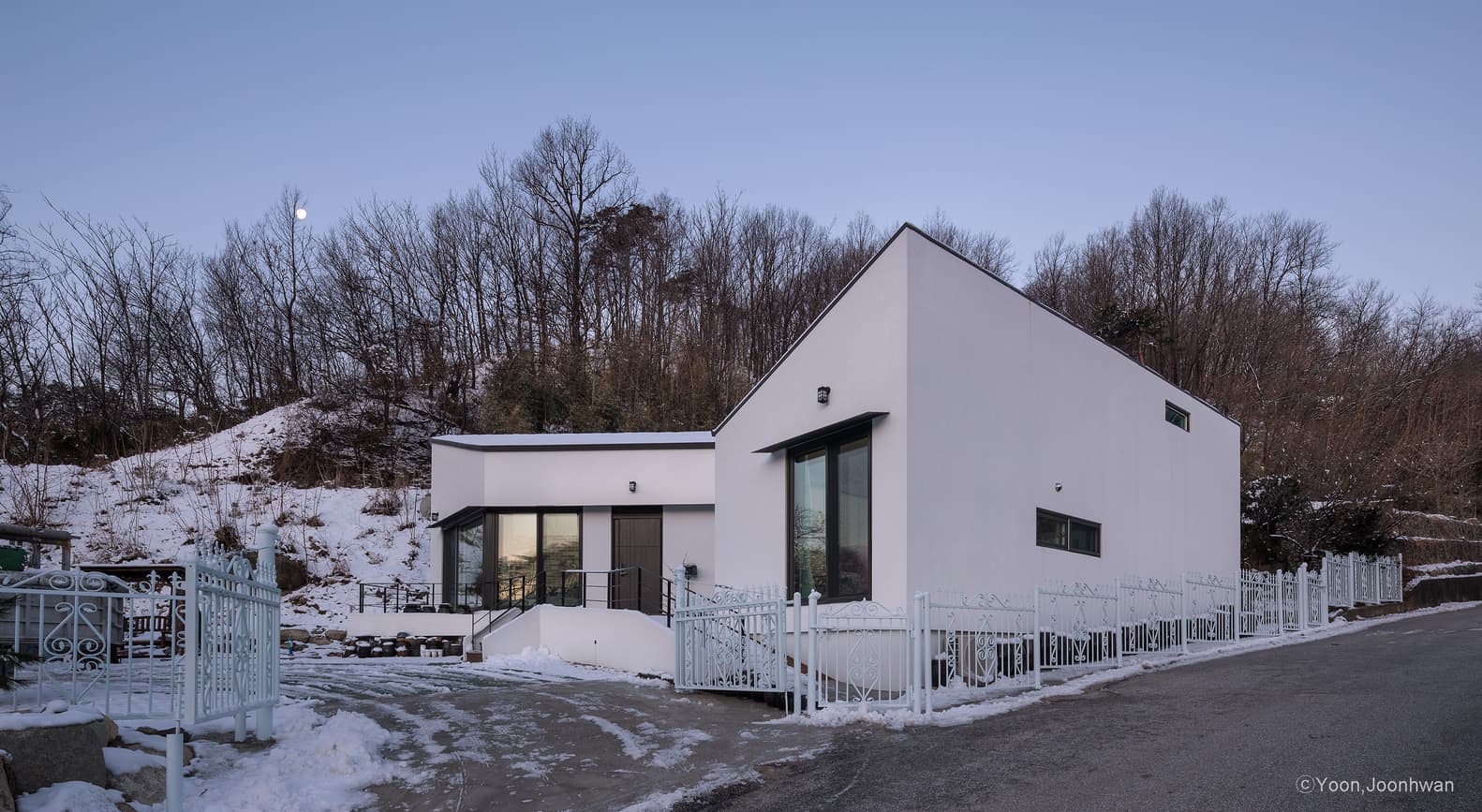 In the mountain village of Gangneung, South Korea, the Gwaneum-Ri House was created by Architecture Studio YEIN only feet from where the ice skating heats of the 2018 PyeongChang Winter Olympics took place. Named for the Korean Buddhist term Gwaneum-bosal, the house embodies the values that the local people hold dear.

Besides being a previous Olympic site, the village was also the site of a terrible forest fire in May 2017. This rendered the area quite vulnerable thanks to dry mountain winds and harsh weather coming in off the Easy Sea. Many of the forests and high numbers of houses were damaged in the fire, including the family of home a young couple with a brand new baby. This family’s house has now been rebuilt on the same site where the ashes of their lost shelter once stood, like a symbol of hope.

The site on which the original little wooden house stood is small but held a lot of potential for innovative contemporary designers. The plot is decently sized but triangular in shape, leaving the only space that’s suitable for a yard quite narrow. Teams accounted for this by building a triangular house that nestles comfortably in the back of the plot, leaving the forward strip free for a yard.

Inside, the slightly trapezoidal house is split into two functional spaces. One is intended for the couple and their daughter for everyday use and the other is more suitable for guests and visiting family, sitting closer to the central courtyard. Between the two volumes sits a triangular transitional space that’s specifically intended for sharing and bonding.

An apple tree was planted here in this serene common space, taking advantage of the slight difference in level between the home’s two halves due to the fact that the plot sits on a bit of a slope. Designers took advantage of the land’s natural slope in another way. Ramps were built into the home’s front deck and inner space to make movement through the house friendlier for the couple’s elderly parents and even themselves as they age within the home in years to come.

To the right of the house and its entrance ramps sits a lovely garden. The roof of the house slopes towards this garden, creating a natural visual flow that’s pleasing to the eye. Close to here, the wall of the guest room has a window to keep things bright, but it is minimal in size in order to block noise from the road and keep the guest bedroom comfortable and private.

In contrast, the living room has a large window that perfectly frames stunning views visible from the home’s slope. This window is set right into a corner, accounting for the house’s triangular shape. This corner is also situated such that it becomes a kind of vestibule between the kitchen and the living room.

From the kitchen, the central garden is clearly visible. This was specifically placed so that the owning couple, whose favourite things are gardening and cooking, can enjoy the flowers growing in the garden while they cook together. Their bedroom is located at the furthest back point of the plot so as to block out noise from the road but still provide it with a view of the central garden too.

Between the bedroom and the public spaces sit the master bathroom and a dressing room. An impressive staircase leads upwards from this dressing room into a sunny, quiet loft that might be used as a diverse space depending on the family’s needs. The materiality of this and each of the other rooms in the house reflect their mountainous setting, using a neutral colour palette and placing locally sourced stonework detailing at the forefront of decorative built-in features.