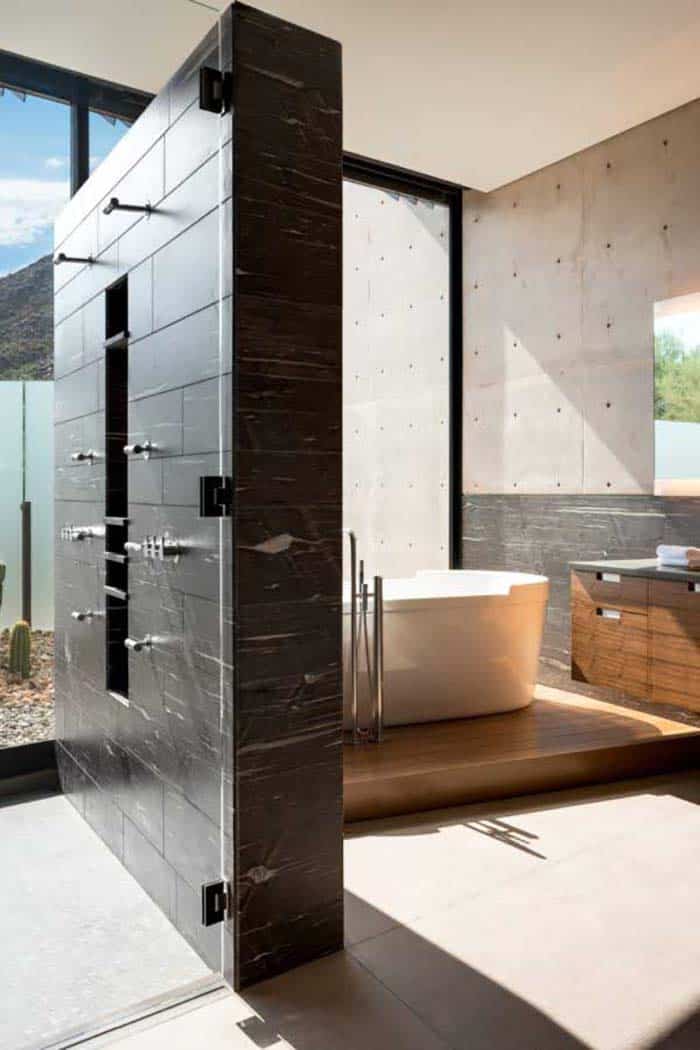 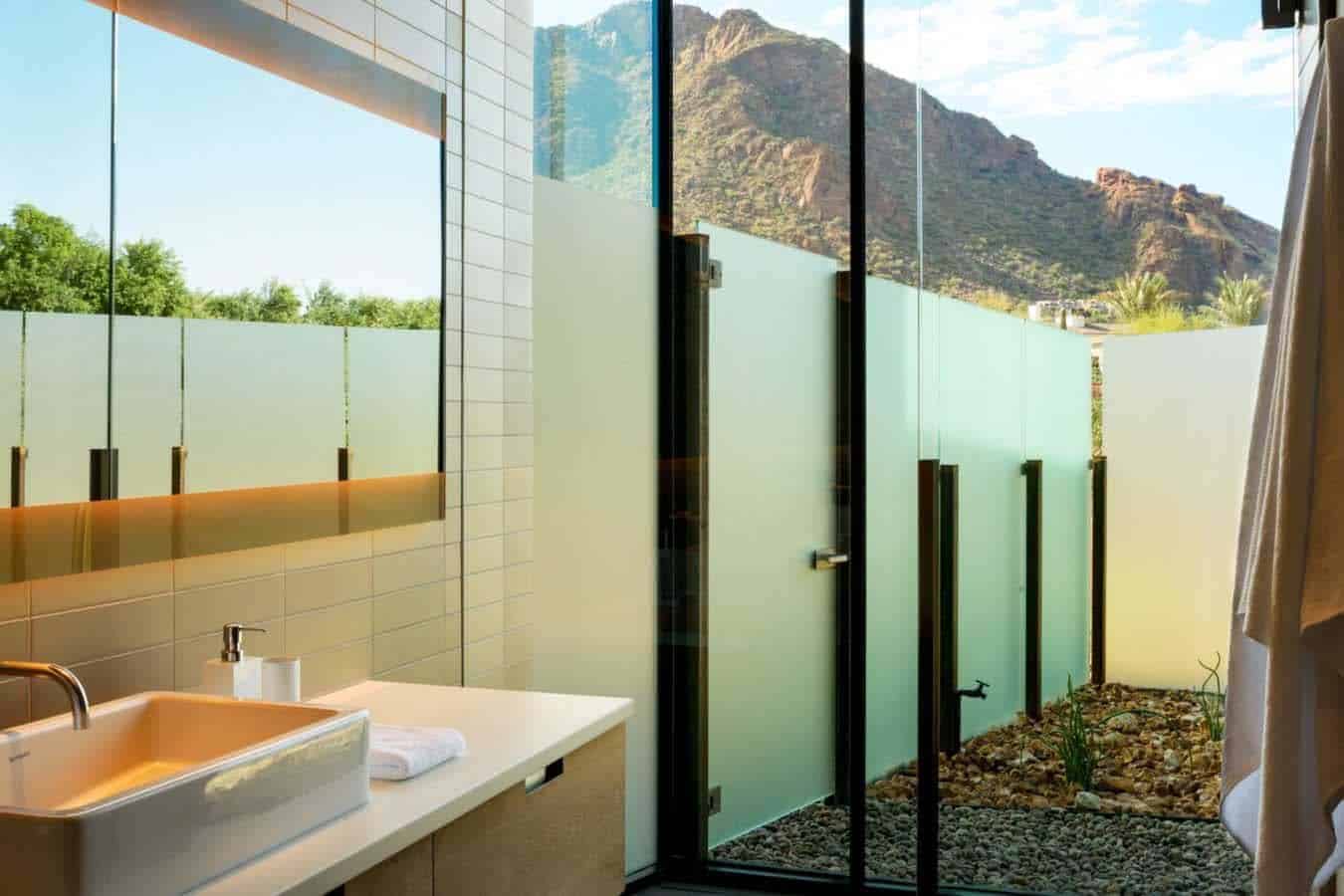 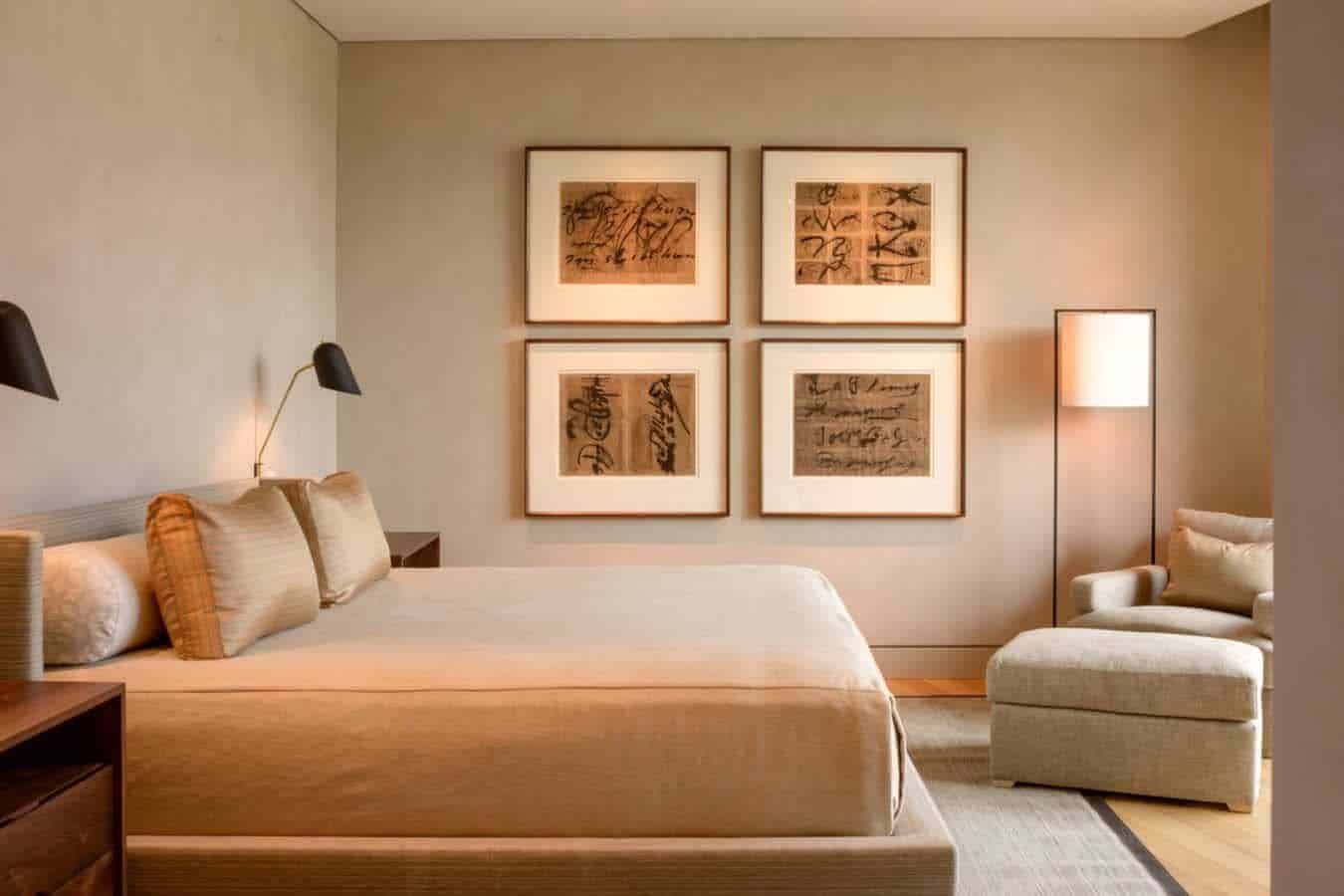 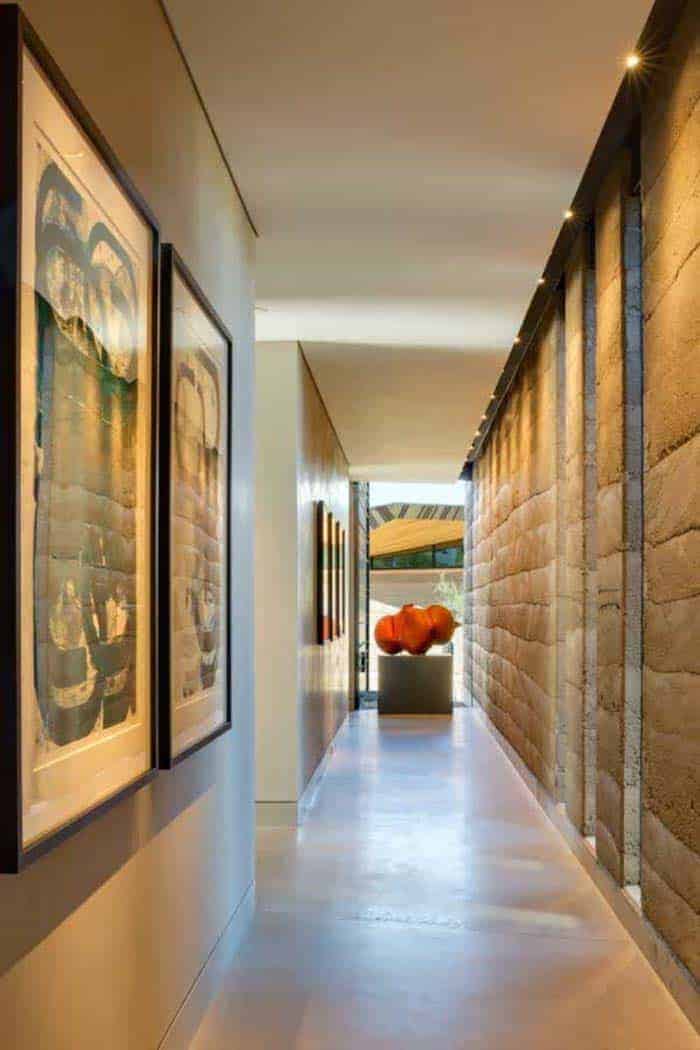 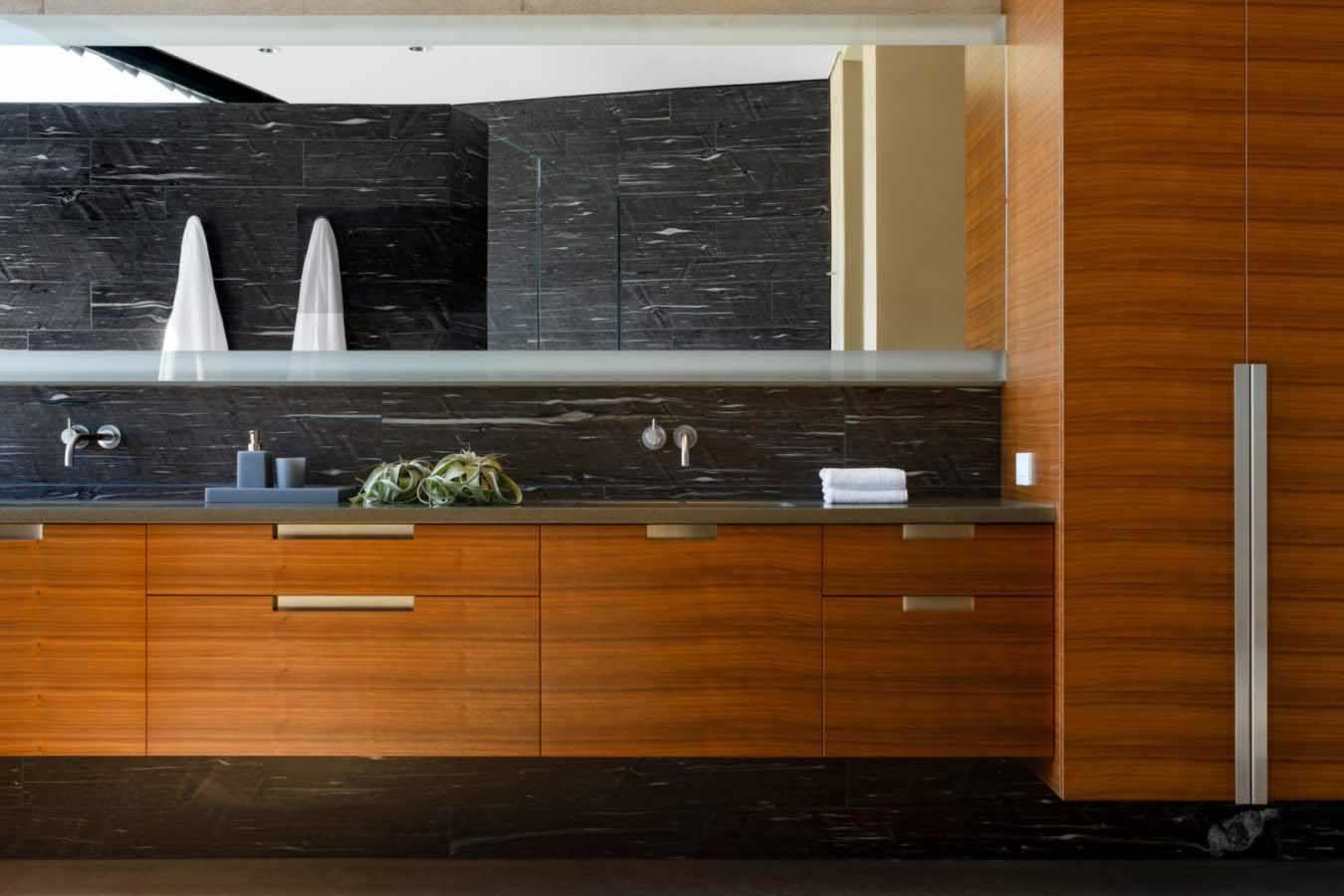 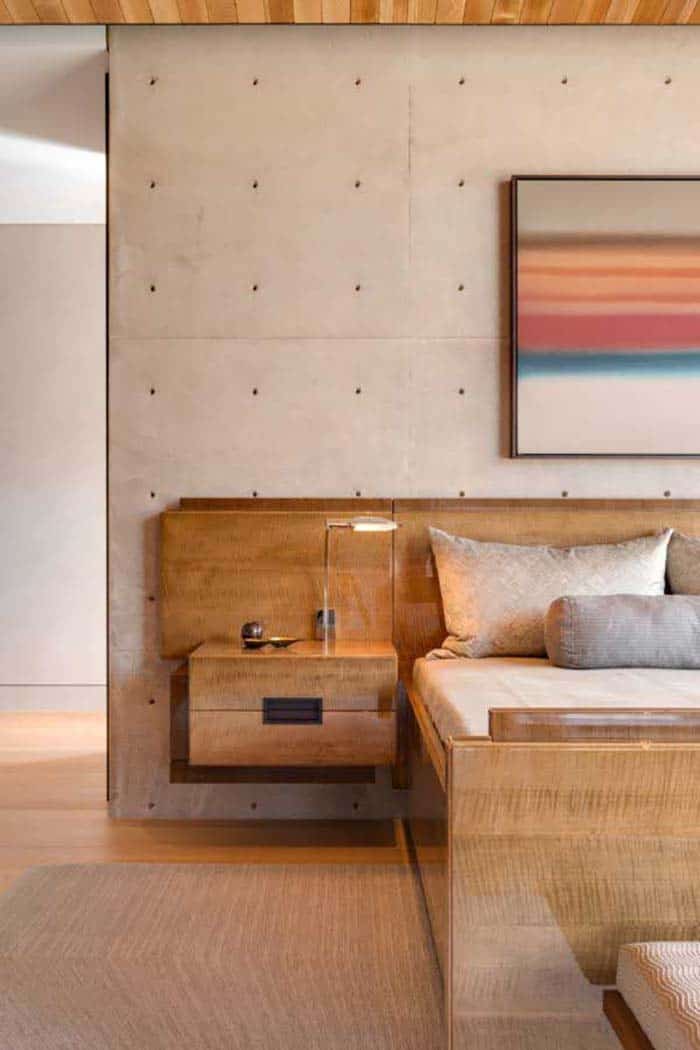 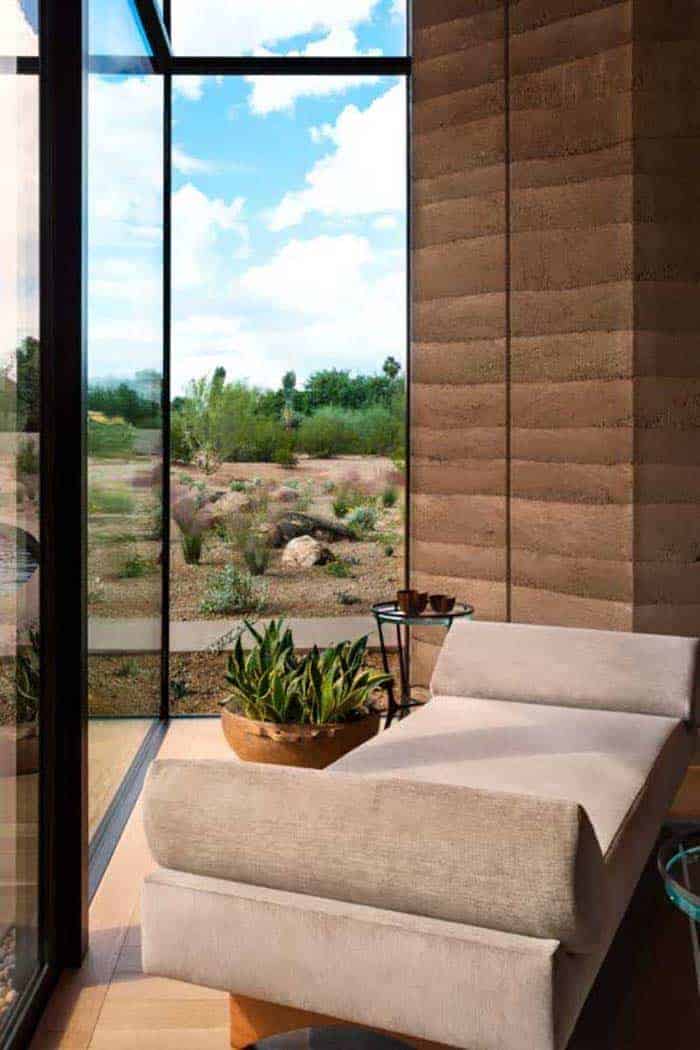 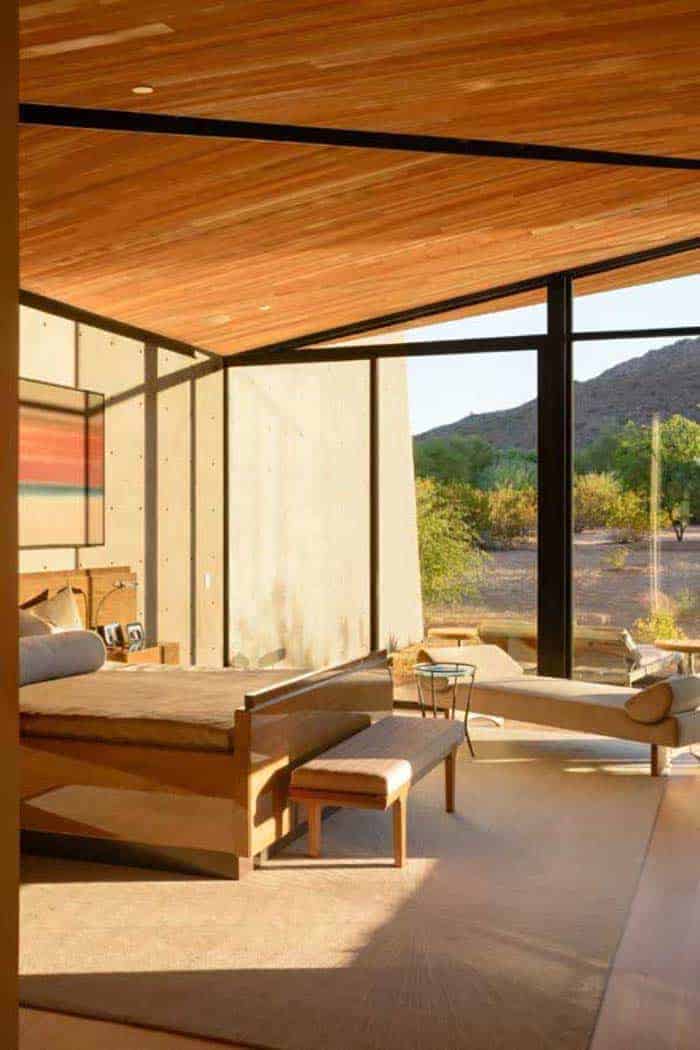 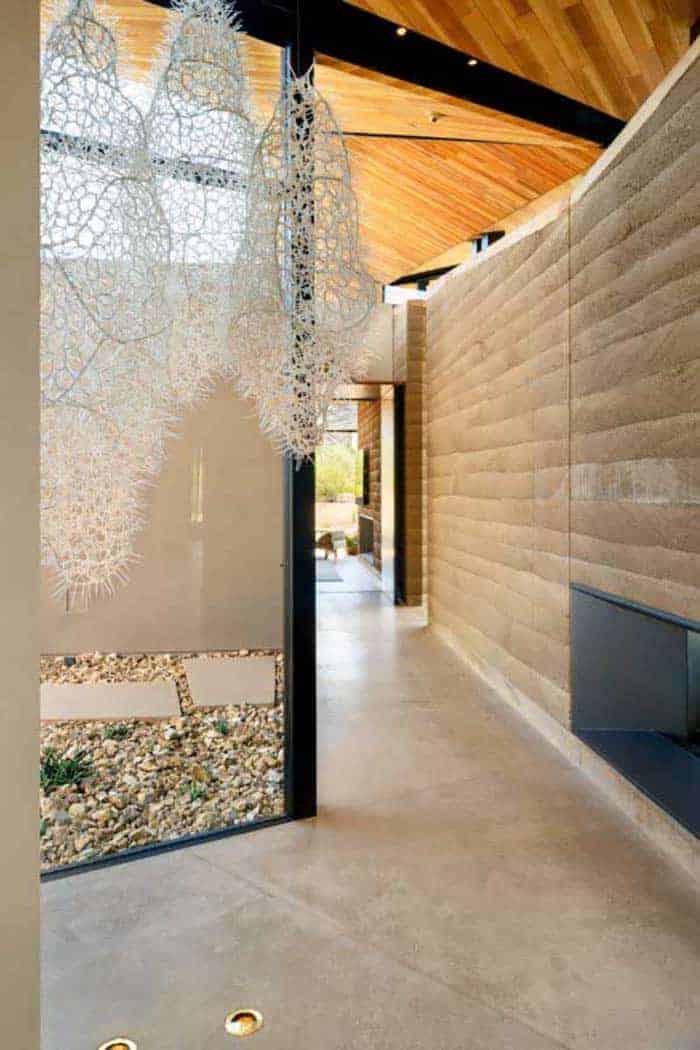 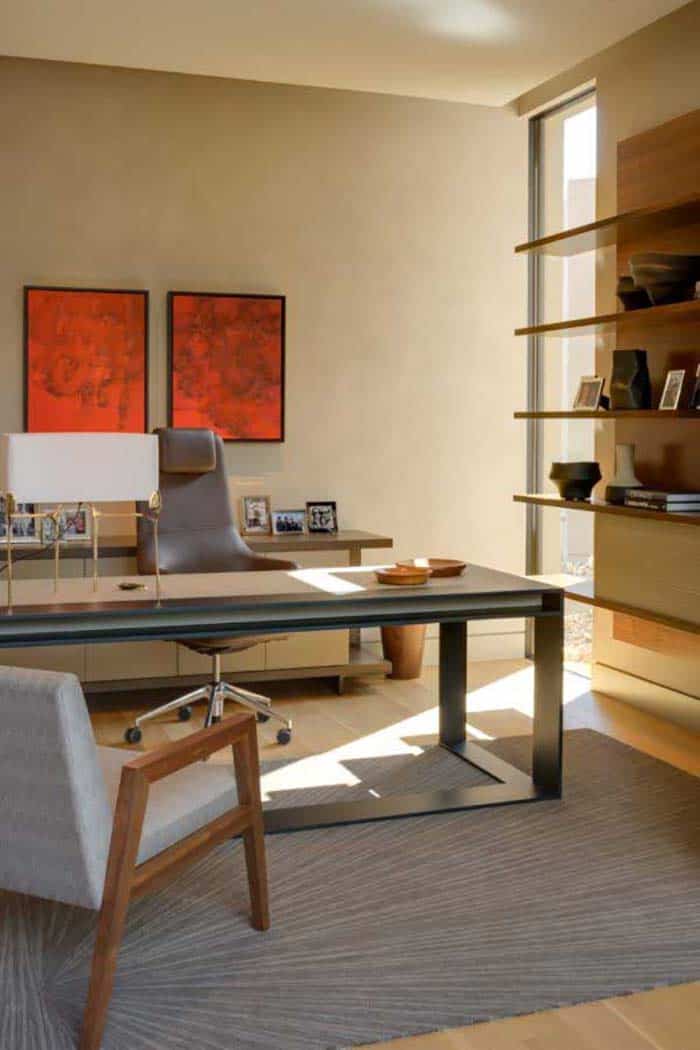 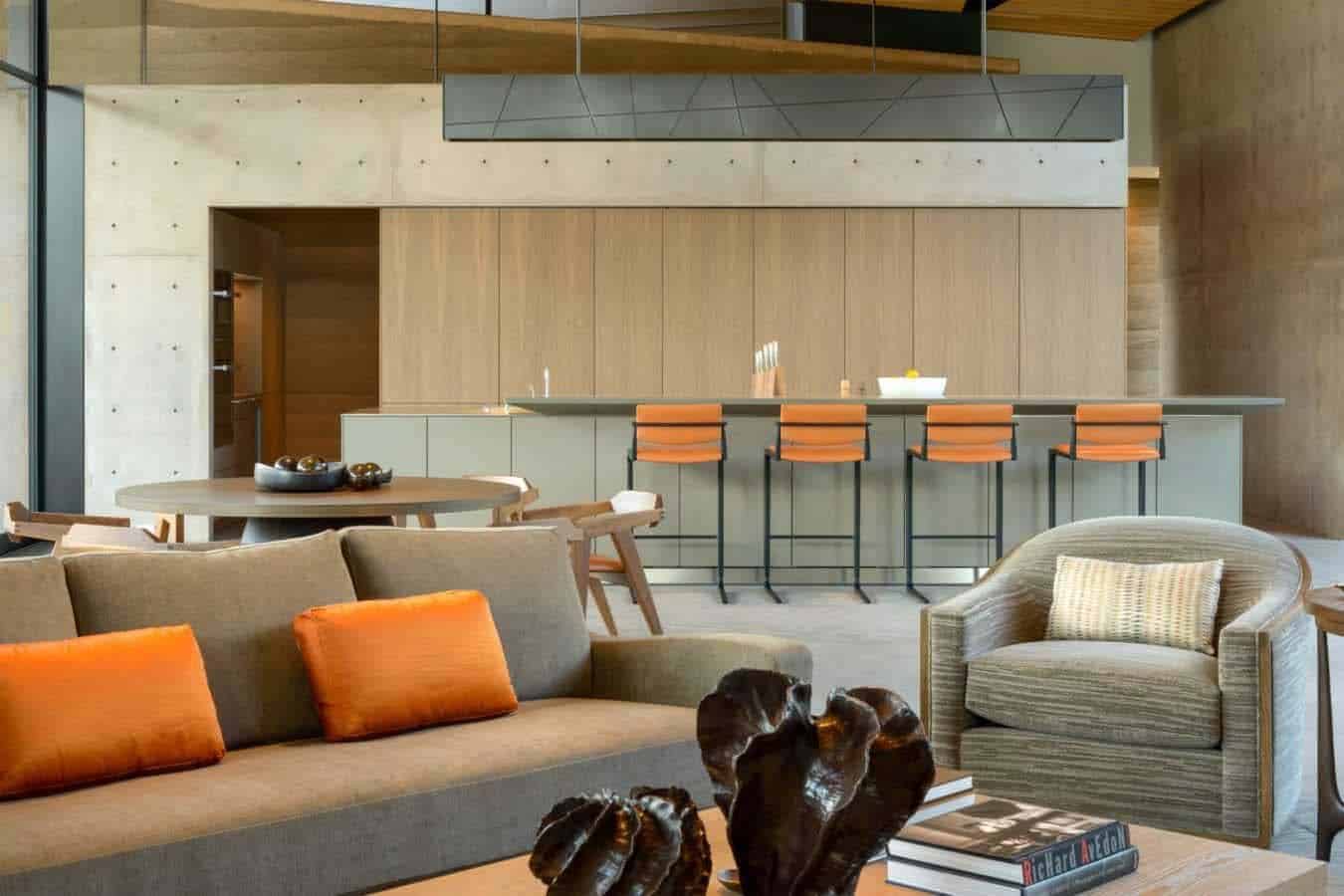 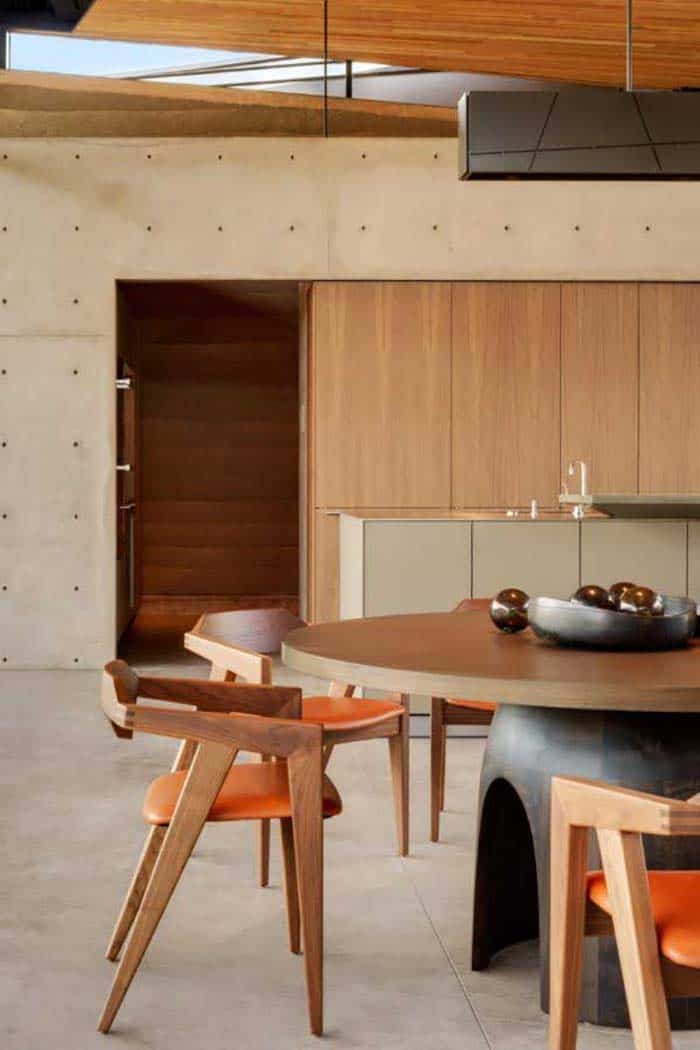 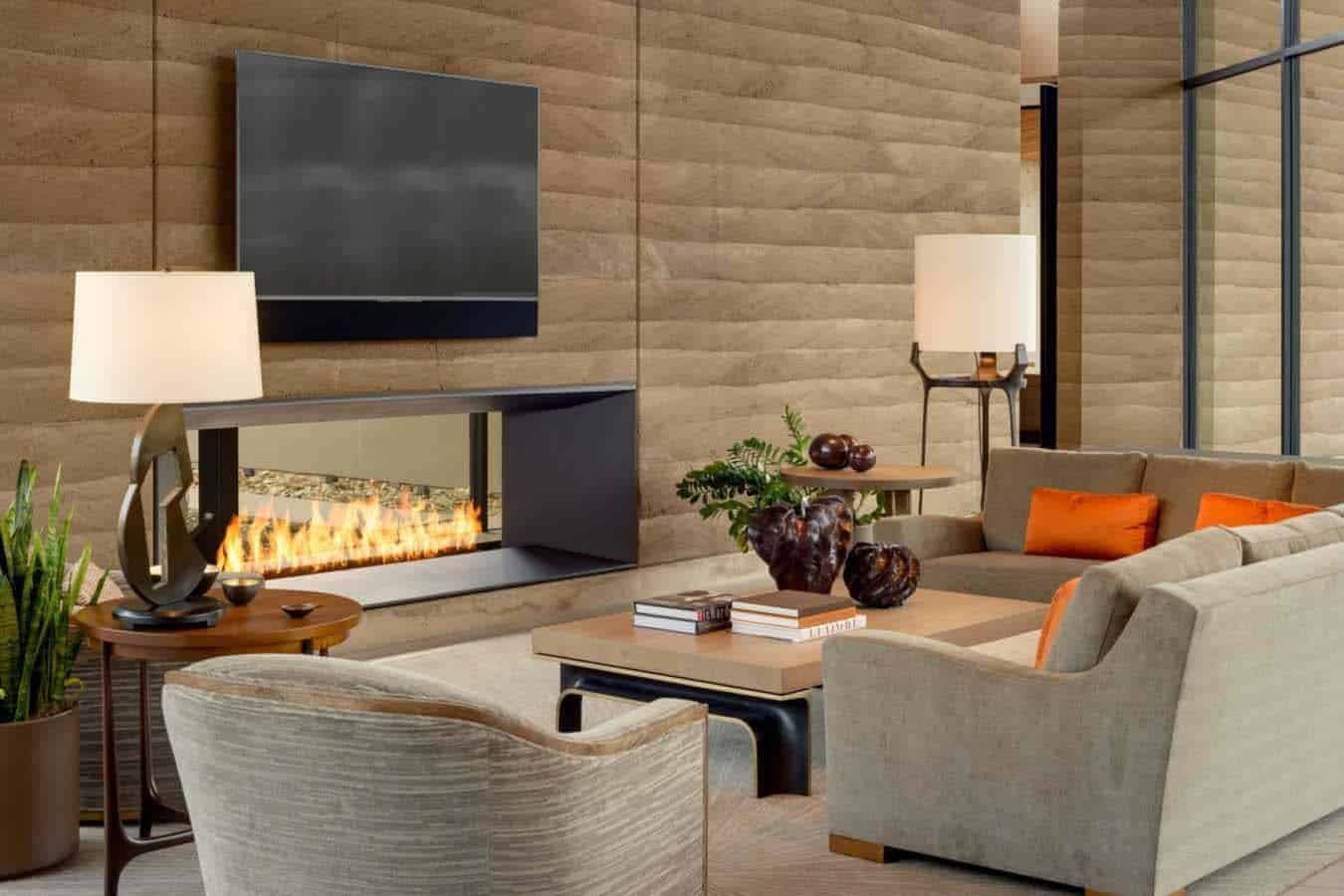 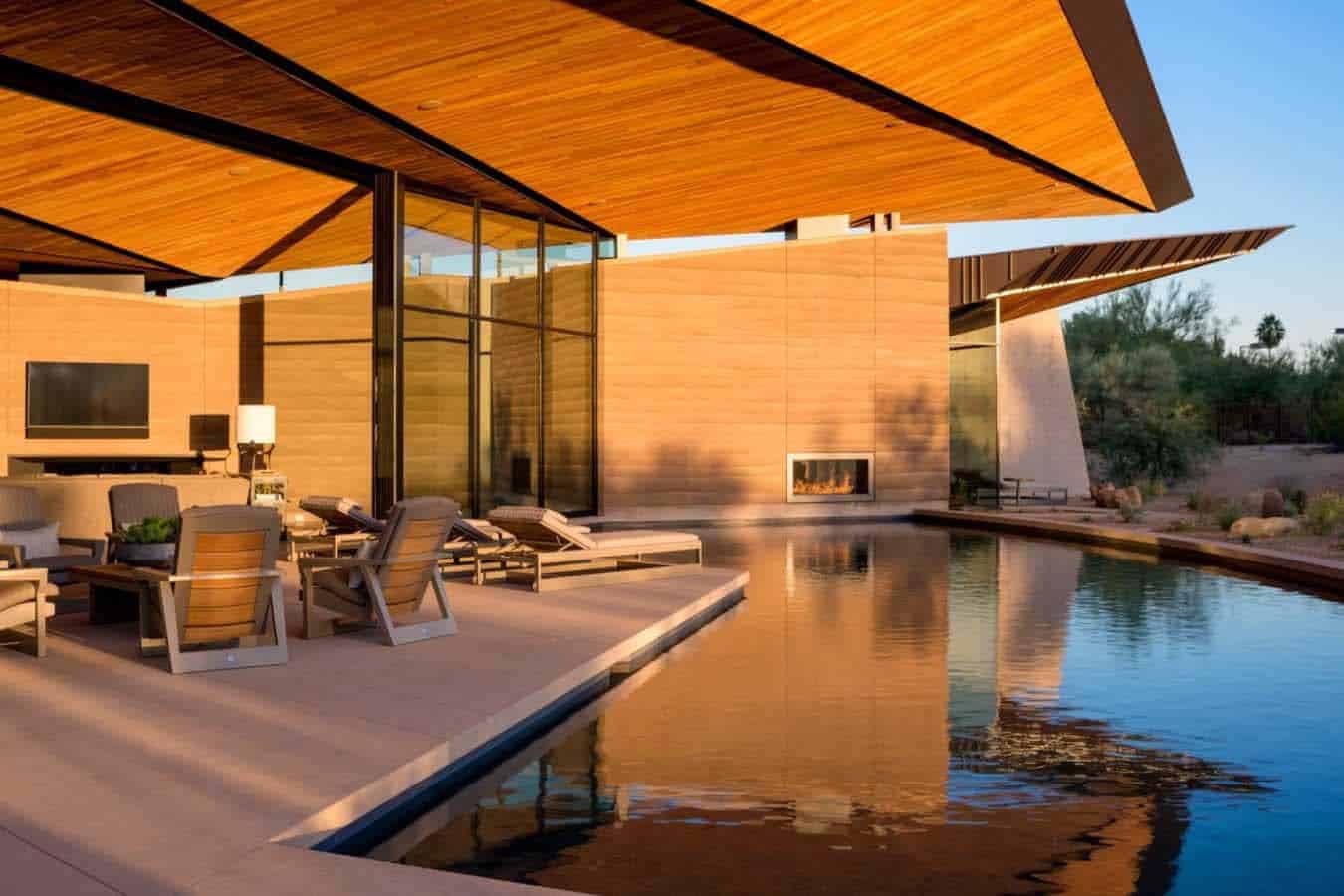 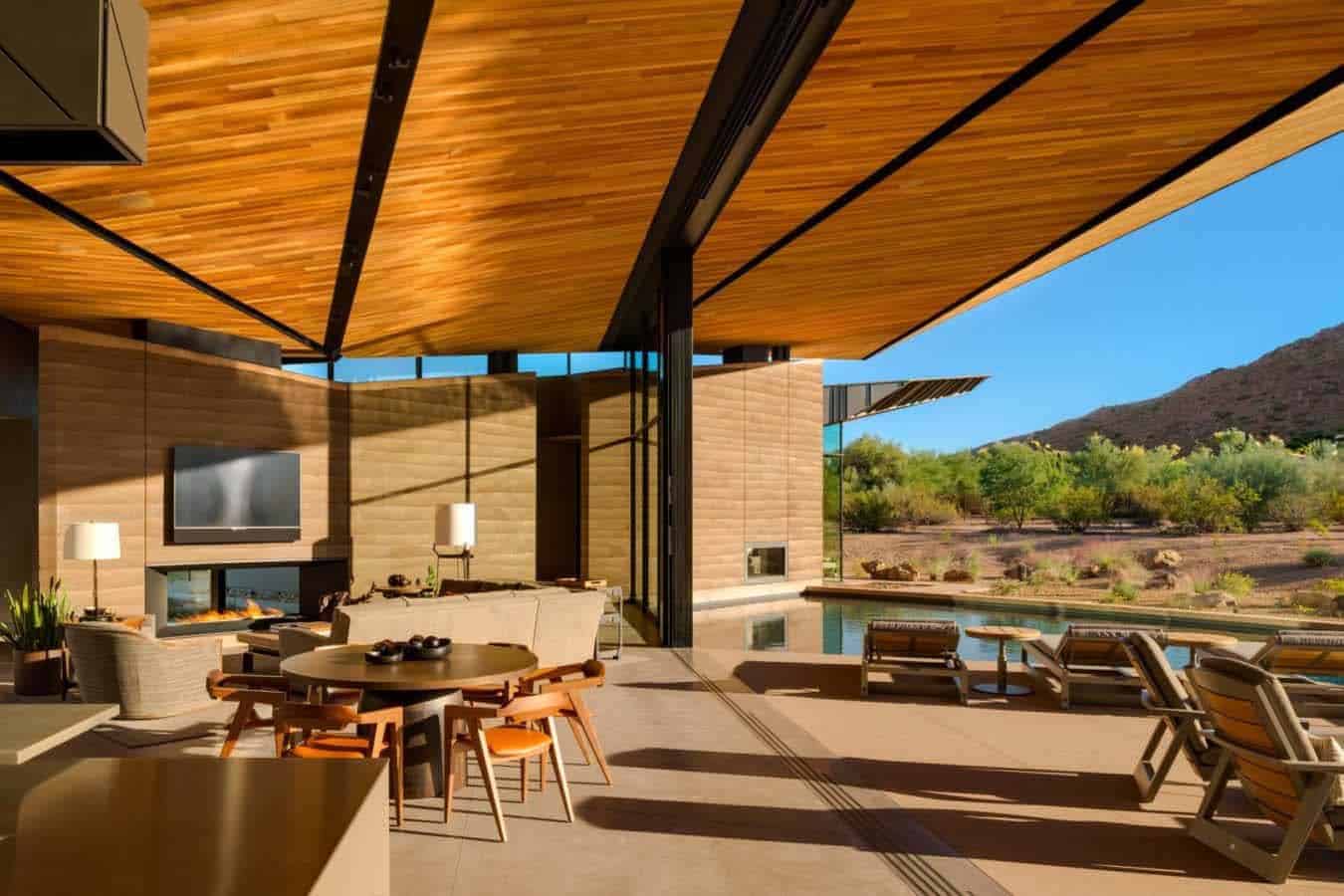 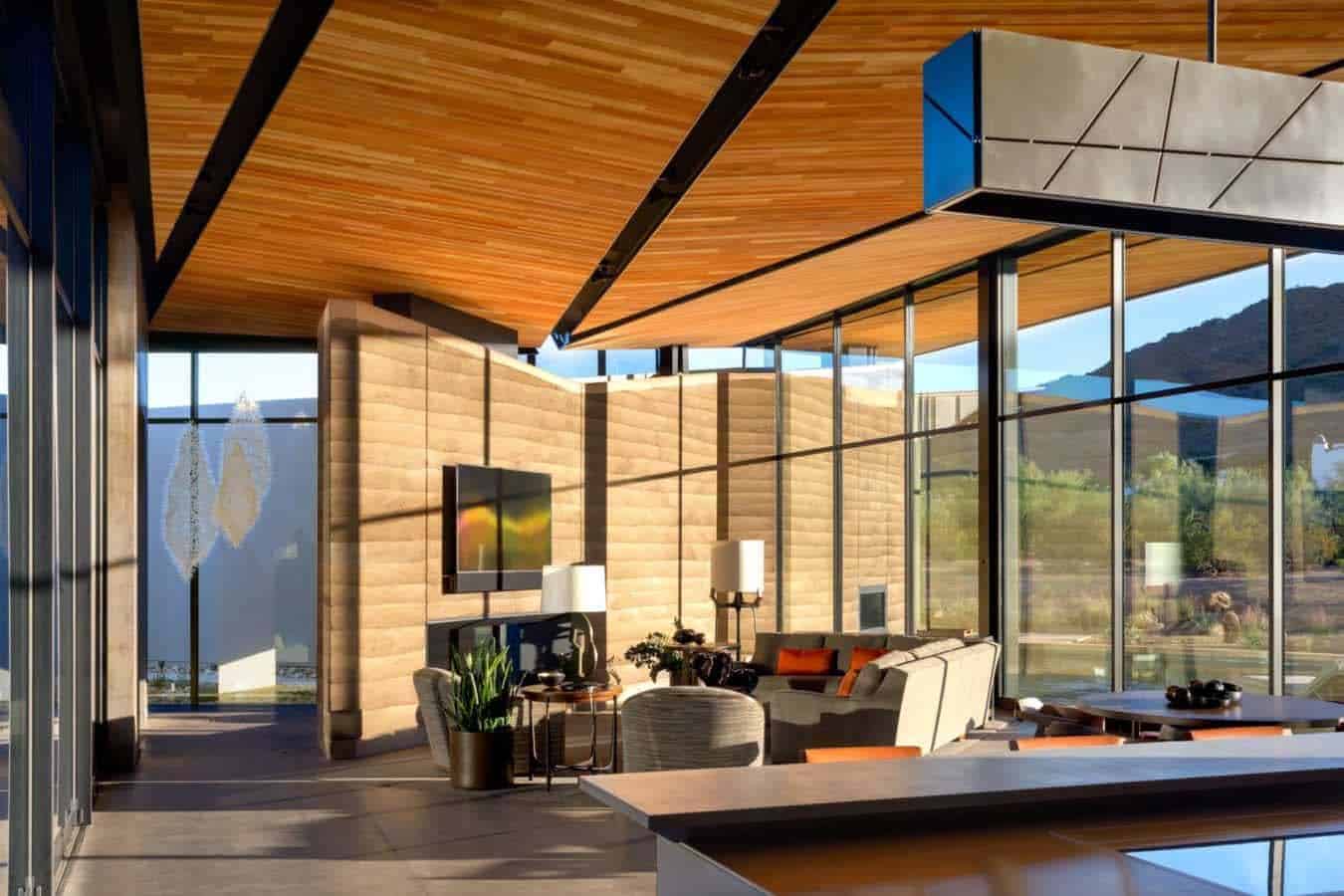 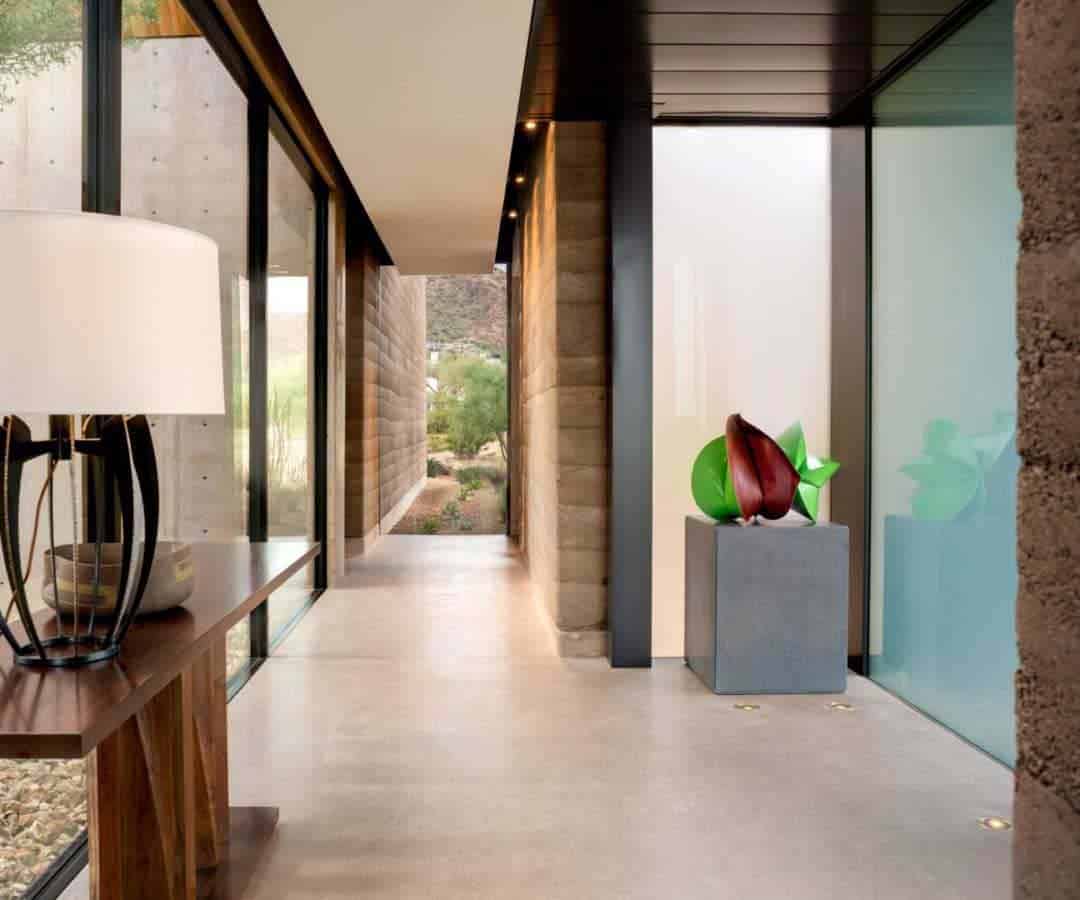 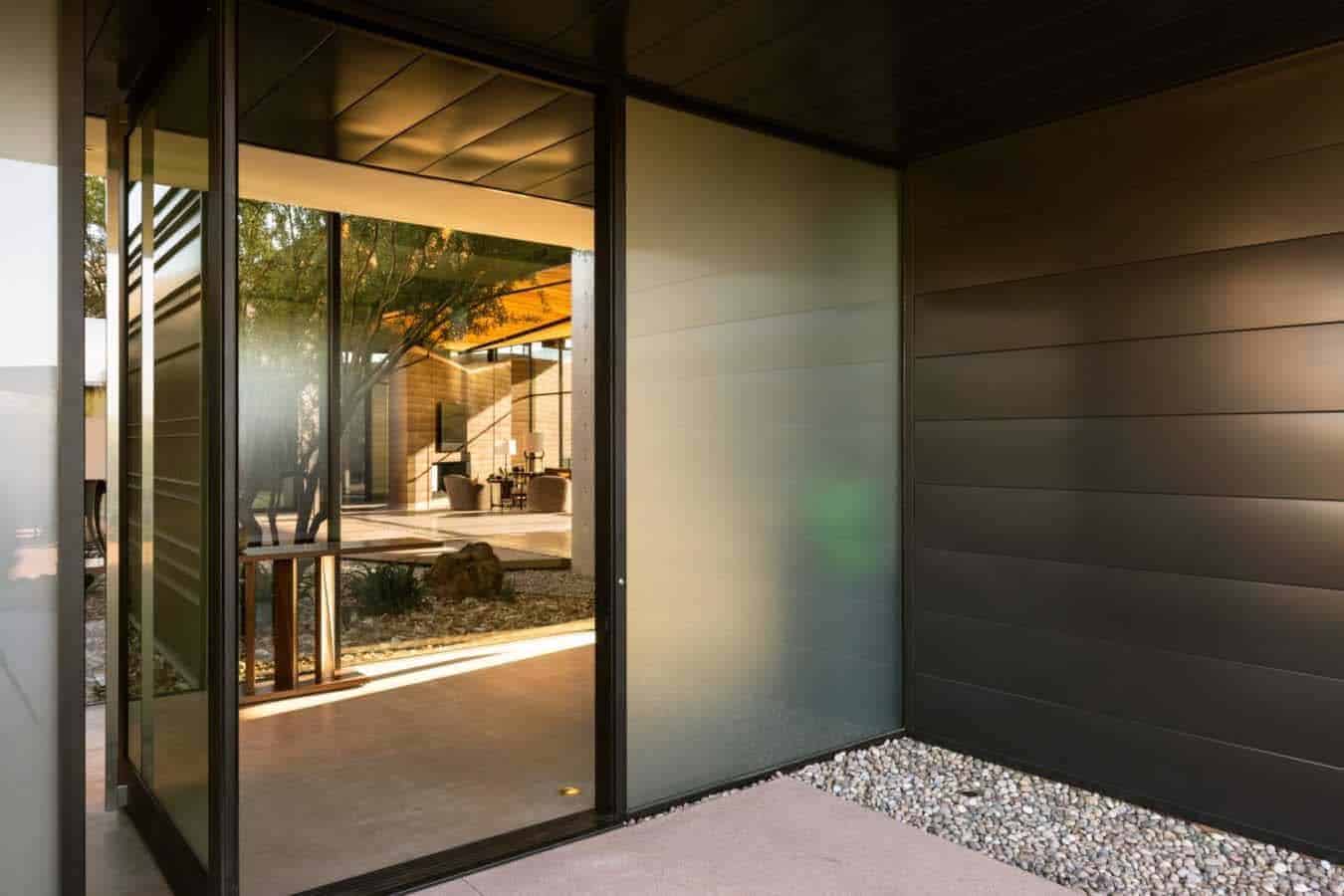 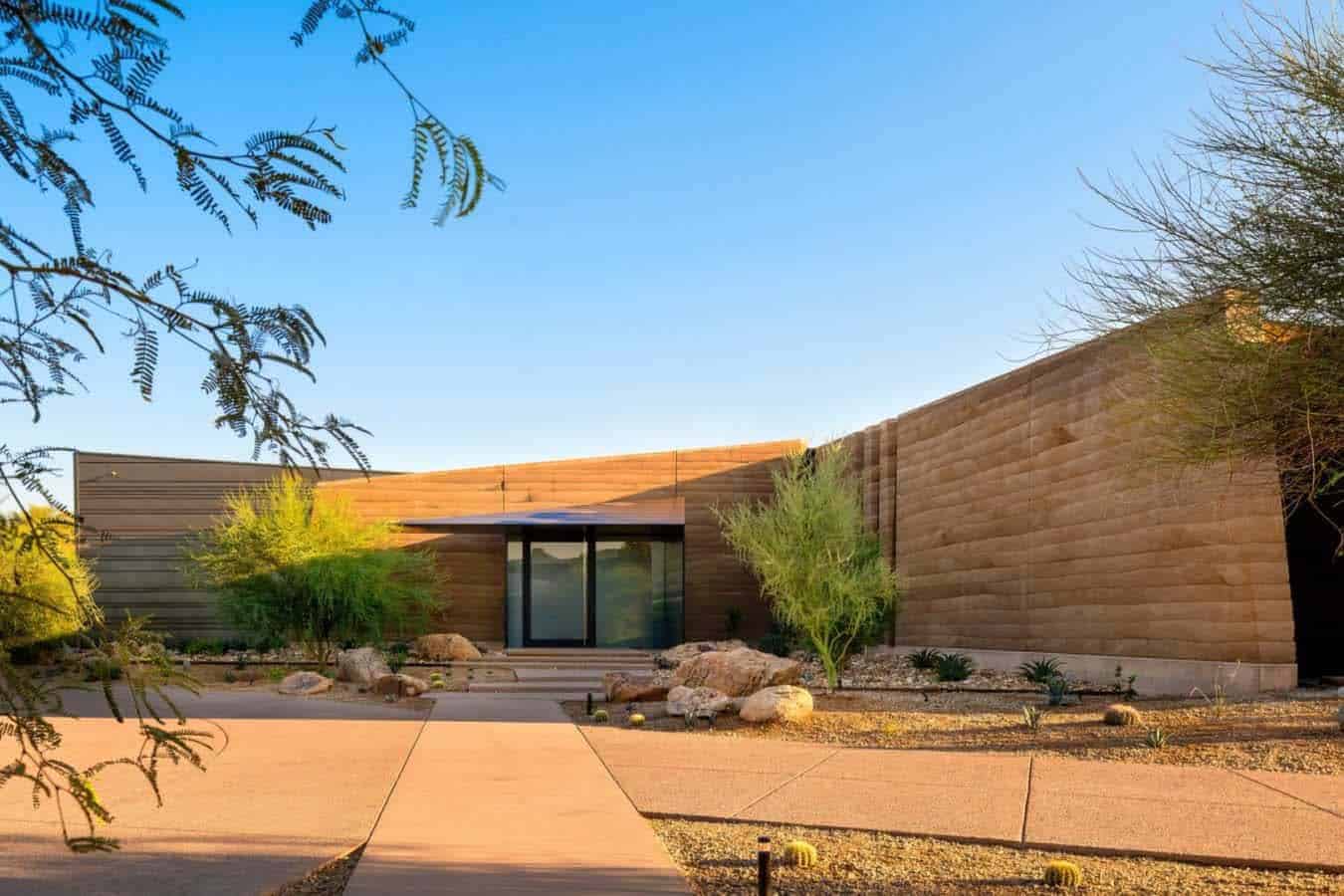 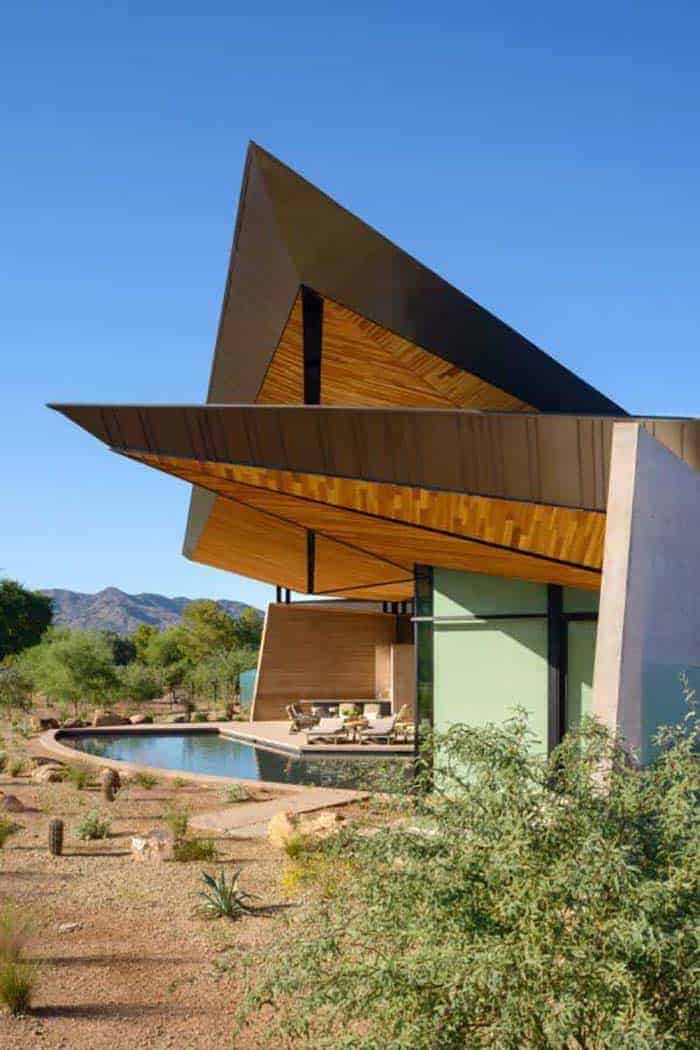 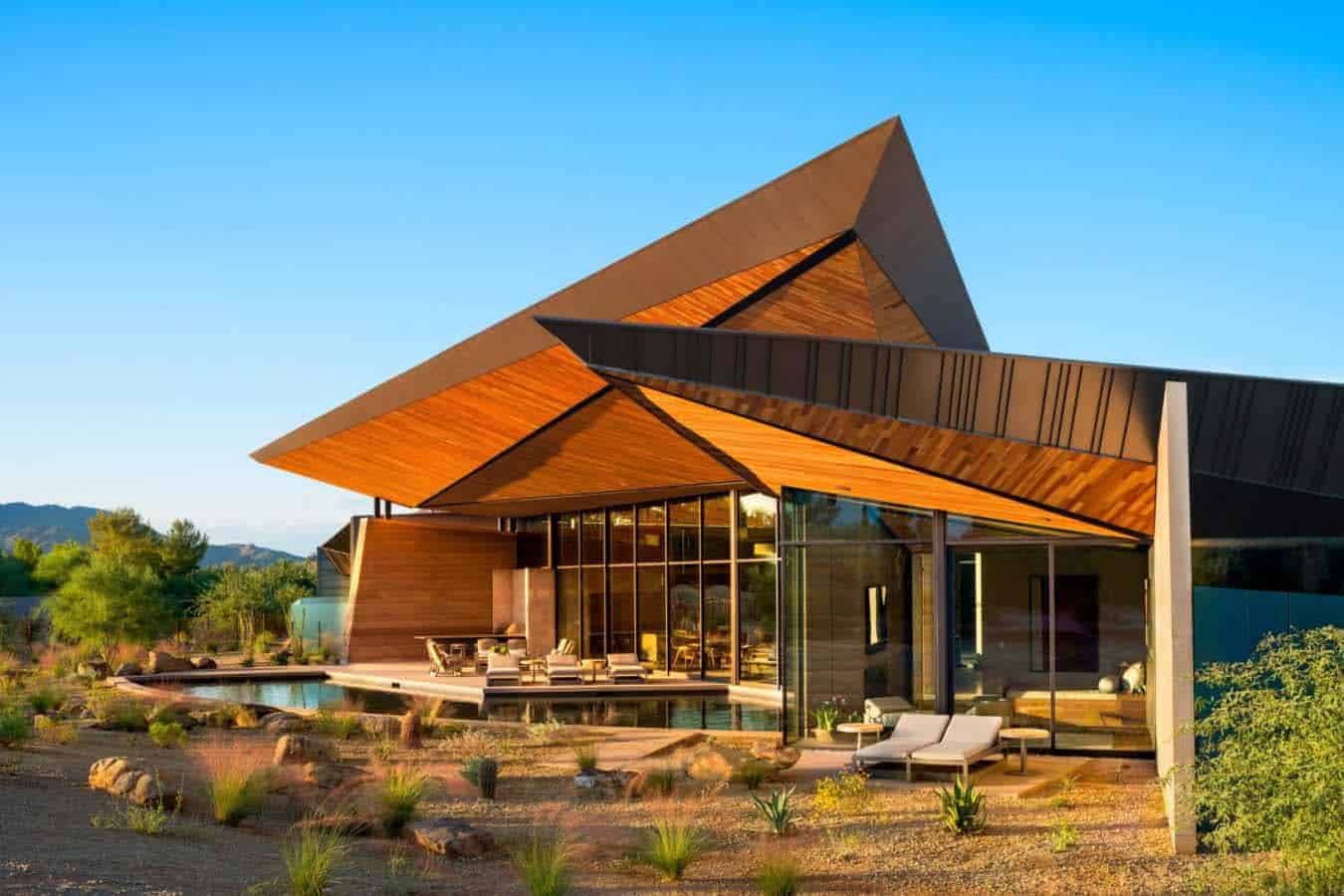 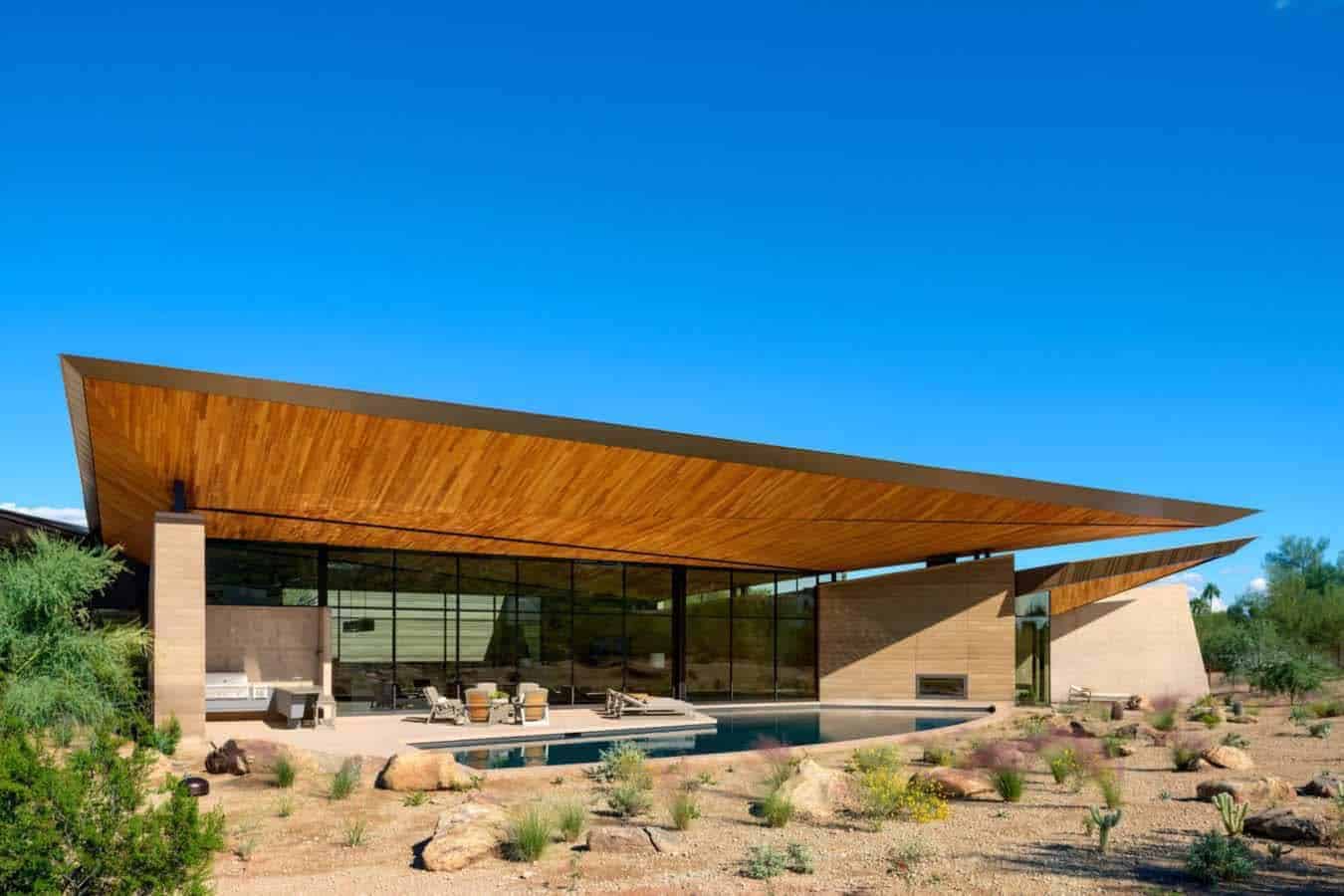 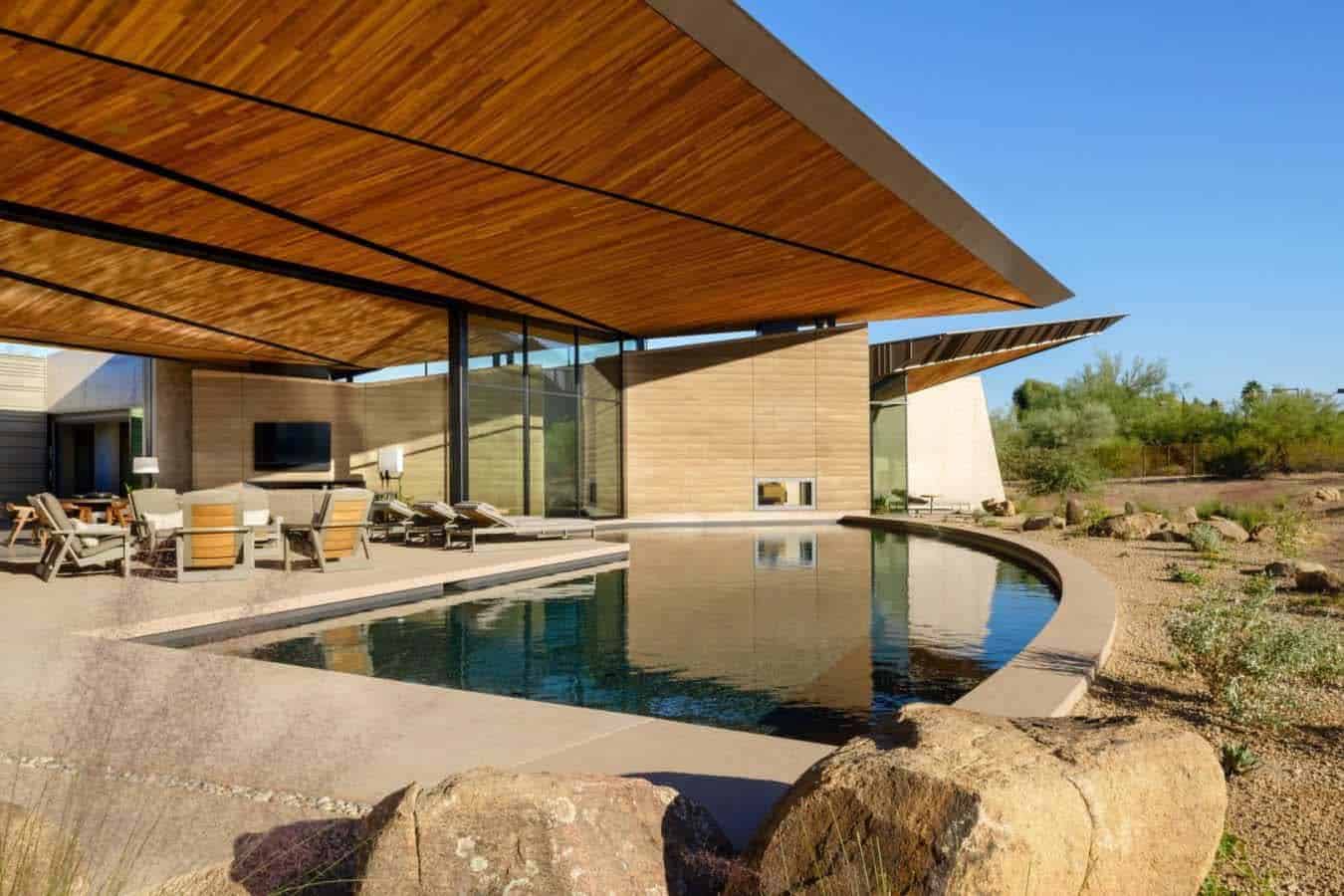 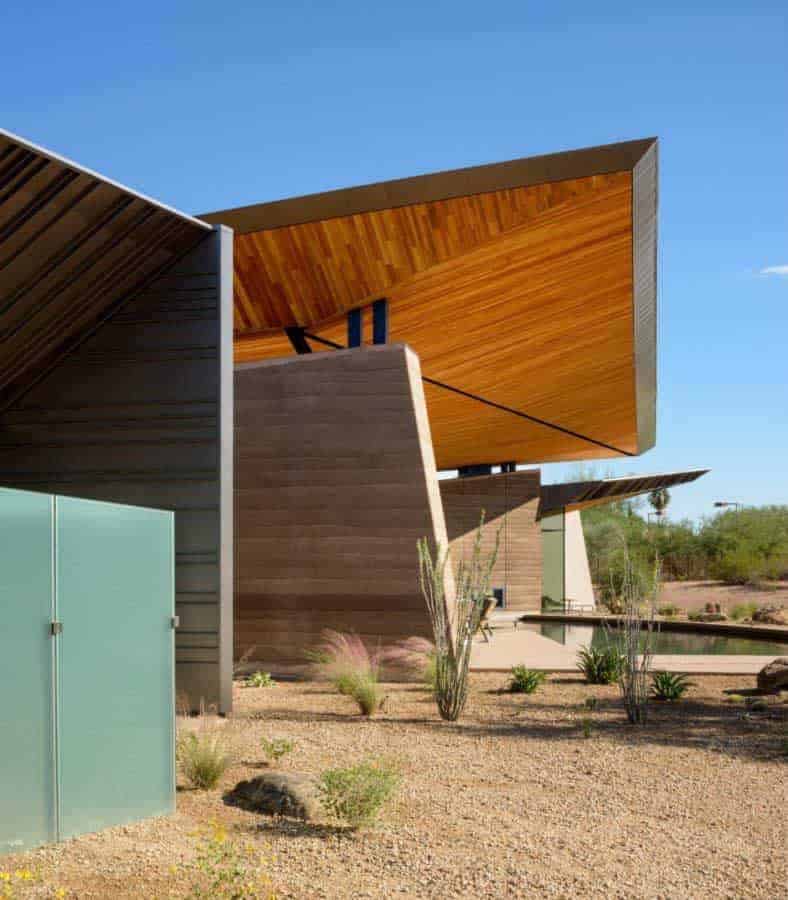 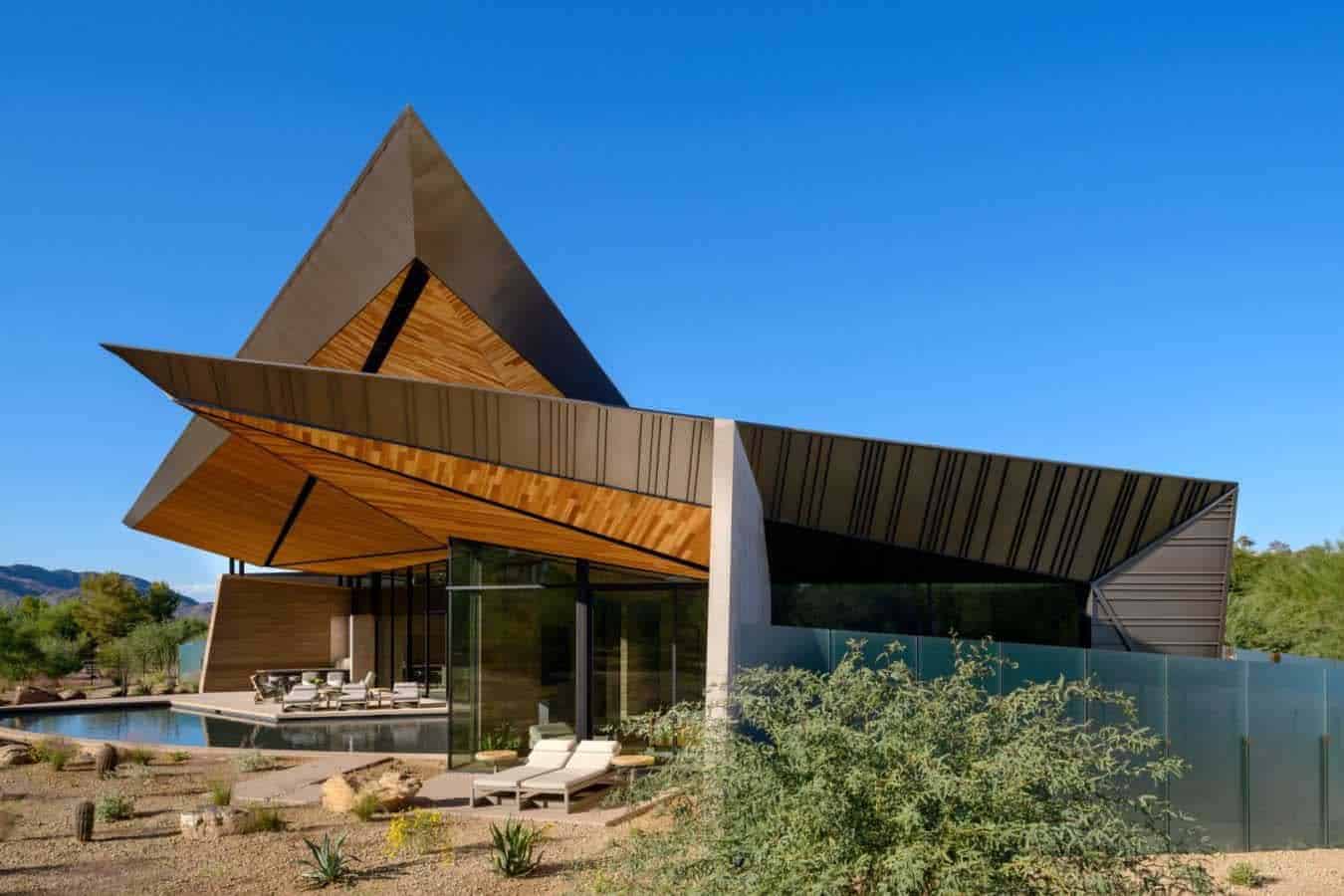 This home was born from the unique goal of combining modern, almost minimalist architectural and decor styles with a celebration of the awesome natural environment surrounds it. Through creative shapes and organic materiality, design teams were able to create a stunning blend of elements that, thanks to a breaking down of borders and colour palettes that mirror the valleys and mountains, pay tribute to the very ground on which the structure was built.

The house itself spans 6,100 square feet and every last inch of it is inspired by the rolling desert around it. The materials used in the building process itself were sourced locally, letting things that are actually indigenous to the land provide dwellers and guests with not just home comforts and amenities, but also unparalleled mountain views.

True to its name, the walls of the house are actually made of layered rammed earth in combination with metal, concrete, and glazed glass. The large number of expansive windows, sliding glass doors, and transparent walls helps break down visual and physical barriers between the home’s interior and the natural environment around it. At the same time as the home almost feels like a cohesive part of the beautiful desert, the glass walls also allow it to stay bathed in cheerful uplifting natural sunlight for most of the day (without overheating, thanks to UV resistant glass coatings).

Upon approaching the house, the most notable feature is clearly its roof. This angular structure, which appears to float above the house, is a canopy roof. The underside of this roof is made of a tectonic-like plates which are inspired by both the local geology and how the rocks historically formed, as well as how the monsoon clouds form in certain seasons.

Besides just looking decorative and interesting, almost sculpture-like, the canopy roof actually serves several practical uses as well. The angle at which each part sits provides weather resistance against the occasionally harsh desert climate changes. It also provides shade to certain outdoor living spaces, giving those lounging there a bit of protection from the hot afternoon sun.

The roof is also a place where, in the owner’s goal of harnessing both coziness and grandeur within the house, grandeur briefly takes centre stage to welcome guests. The roof’s structure rises dramatically towards the mountains in a way that’s almost as breathtaking as the natural view in how it mirrors the rocks, crags, and cliffs themselves.

Both in and outside of the house, designers made the choice to conceal all lighting, figures, and mechanical devices smoothly within the walls, ceilings, and built-in structures unless they were chosen and included to be purely decorative within themselves. This allows the shape and form of the roof, facade, and interiors, as well as the materials used in building, to remain the focus.

Another notable element of the structure lies in the way several interior living spaces are arranged carefully around a central outdoor atrium. This lets daylight and fresh air (when walls, doors, and windows are opened) to pass simply and easily from room to room, providing maximum comfort.

In fact, light was intentionally considered within the design of each room and in the placement of the swimming pool. Designers wanted to harness the beauty of how it might bounce off reflective surfaces and water, light dark corners, and change the look of certain spaces as shadows move about the house during the day’s progression. The entire pool area, for example, is dynamic but also remains zen-like throughout the day.

From the modern, almost minimalist bathrooms to the home office, this home is so clearly inspired by and blended into its surroundings that the overall sense is one of pleasant cohesiveness. Despite its contemporary nature, no warmth or coziness is lost in the home’s interior; in fact, it is quite the opposite.