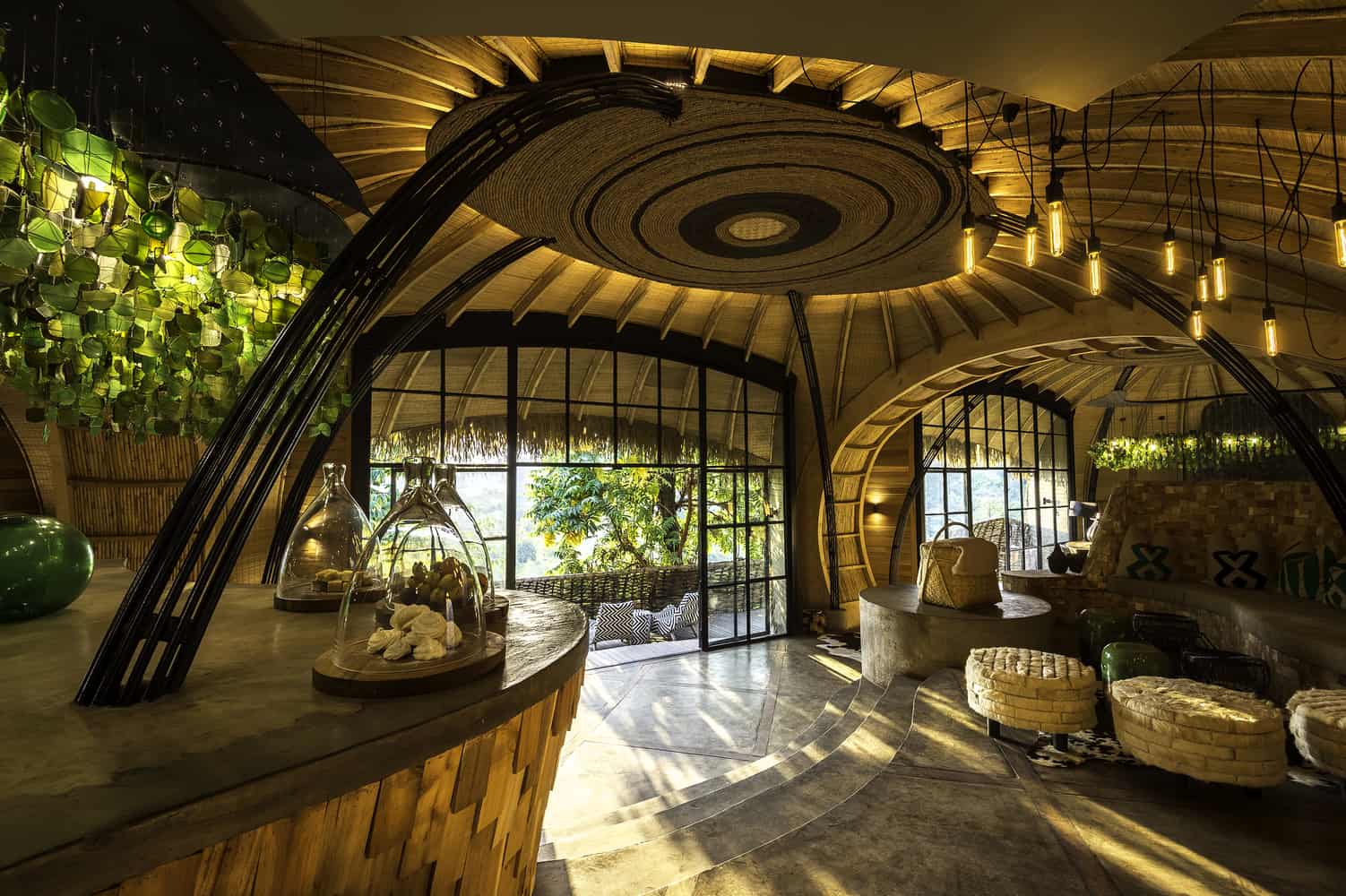 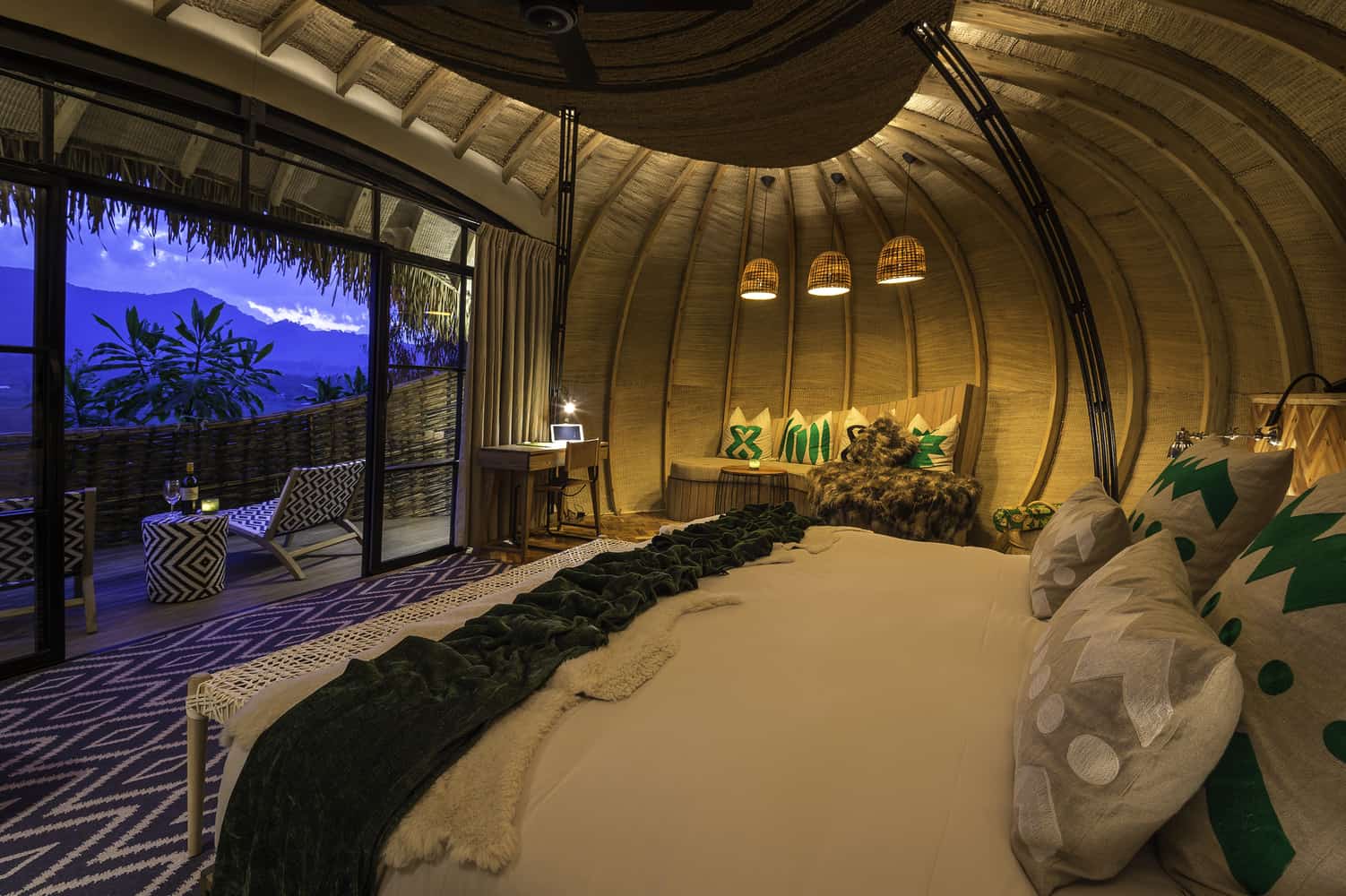 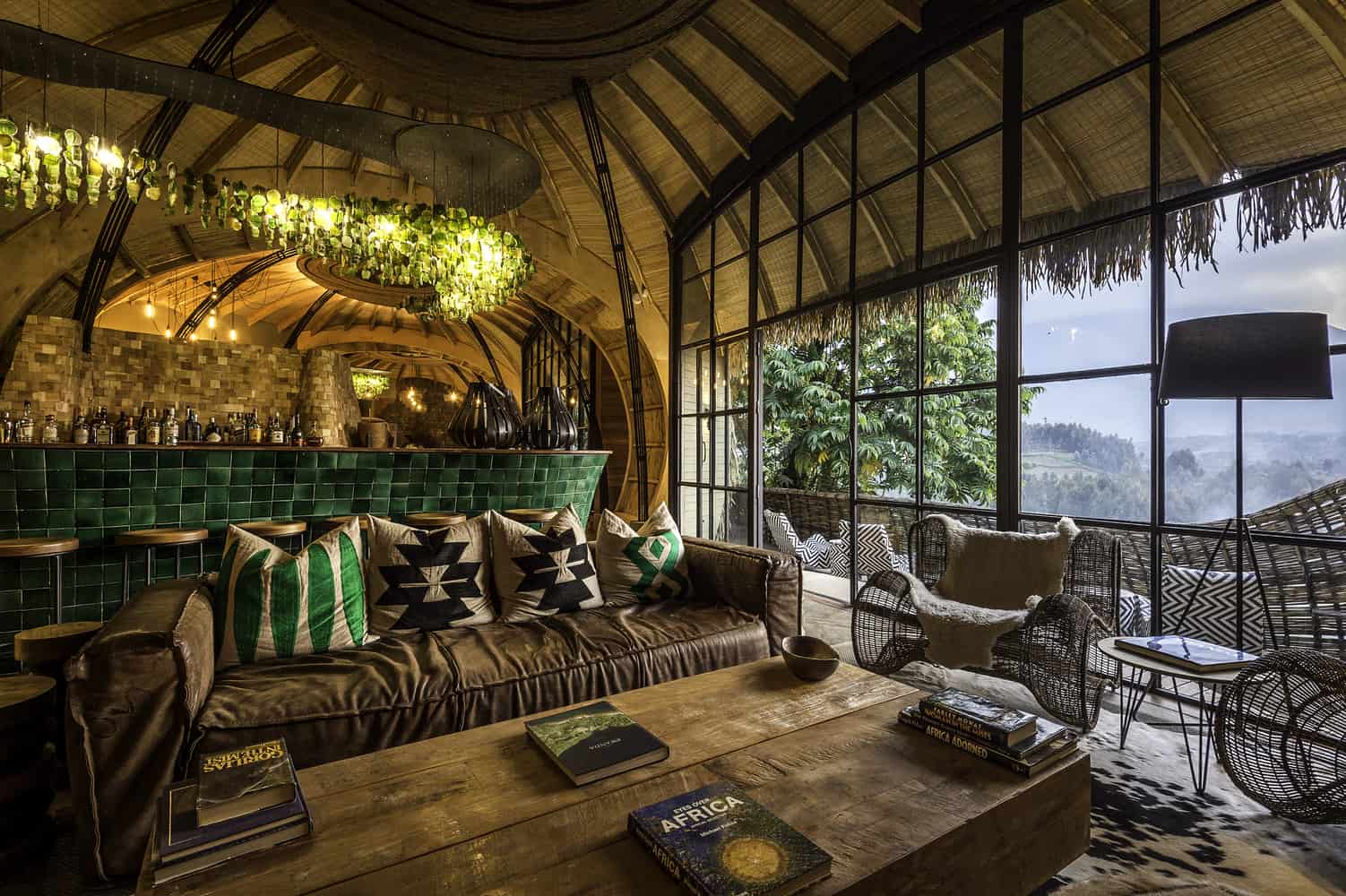 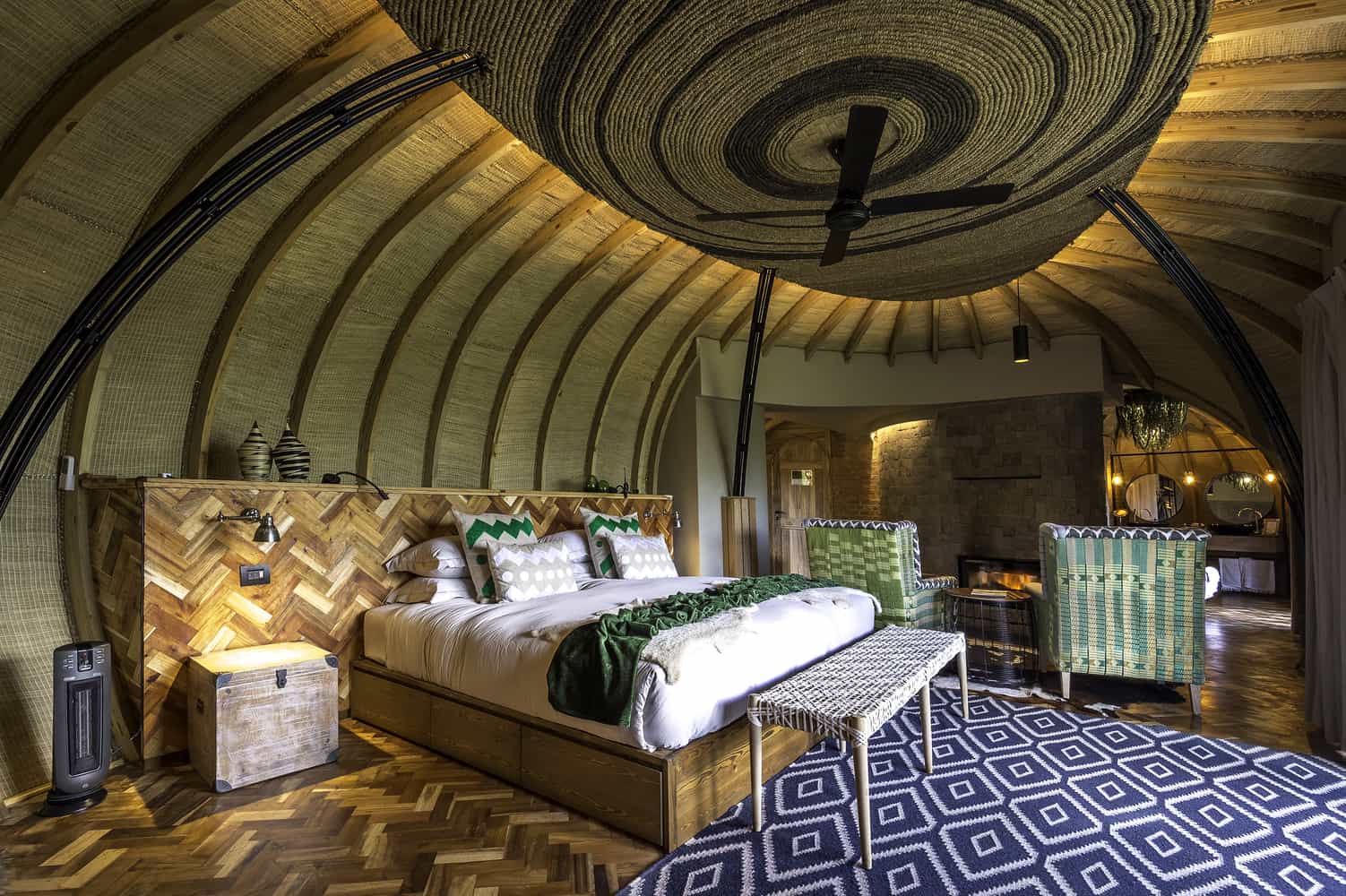 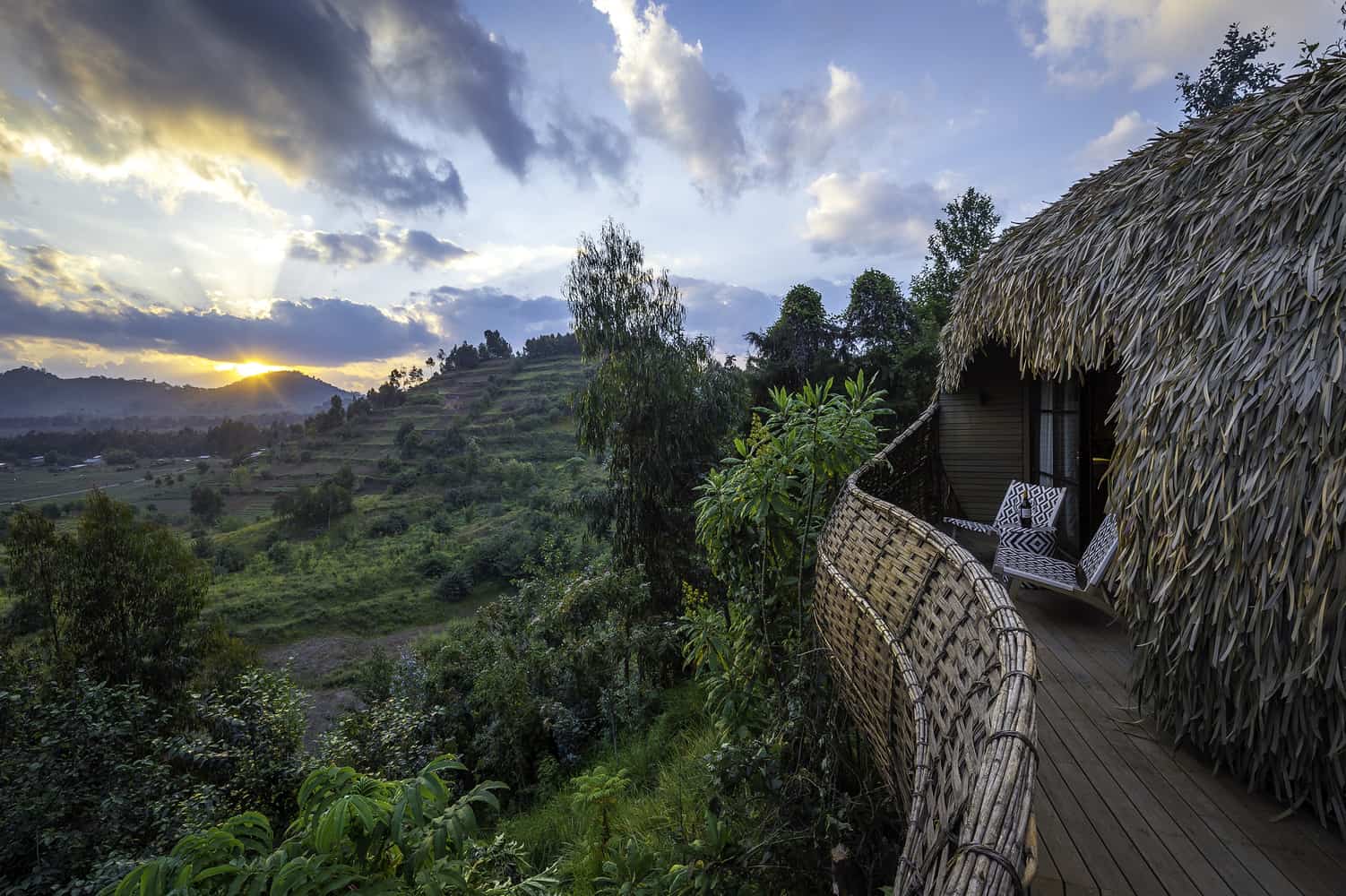 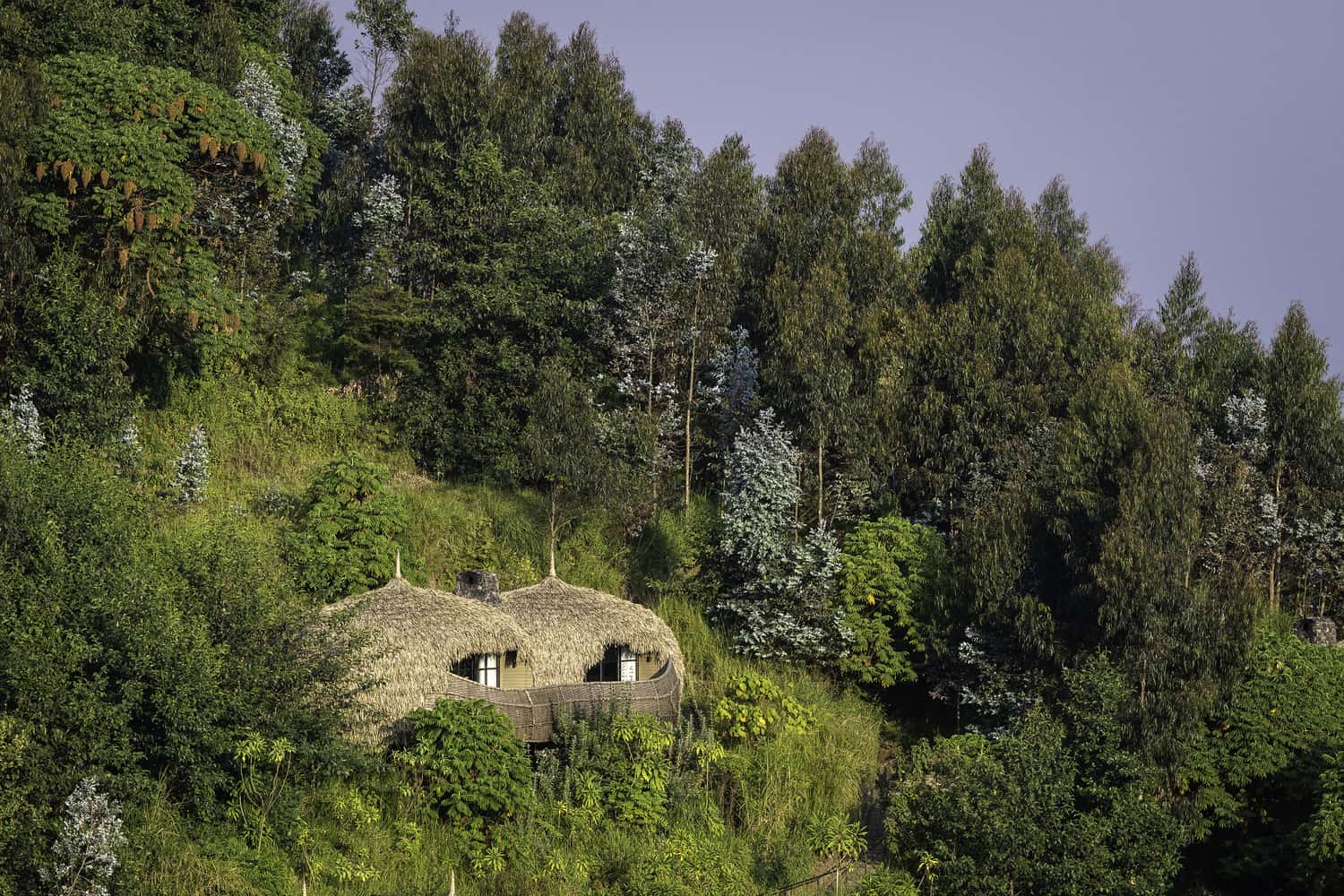 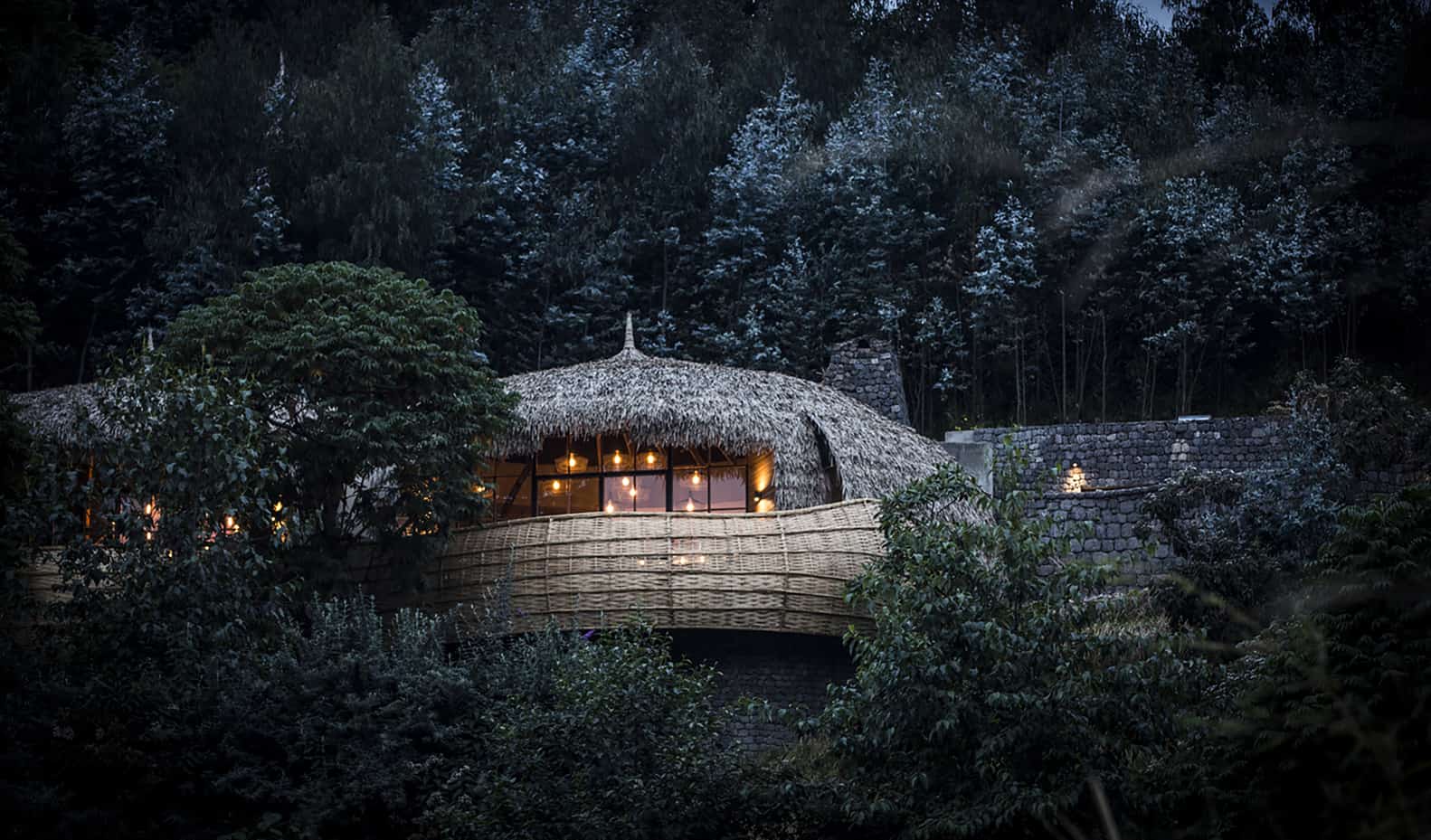 In its shape, aesthetic, and materiality, the lodge has a number of distinct and very evident inspirations. The first is very natural; the beautiful rounded shapes of the volumes and much of the furniture inside were specifically built to reflect the rolling hills of Rwanda’s countryside.

As far as materiality and construction style are concerned, the lodge has another key inspiration as well. Here, designers harnessed the beauty (among other elements) of the King’s Palace at Nyanza, particularly in its thatched design. Much of the volumes’ construction is done in the traditional way but with the bolstering of modern technology. The thatching on the outside, however, is done completely authentically.

The lodge in its entirety sits nestled amongst lush growth areas adjacent to the wide open space of the Volcanoes National Park itself. The volumes weave in and out of the greenery in a way that makes them appear blended and coherent with their surroundings. This was intentional on the part of the designers, who wanted to make sure that the lodge thoroughly reflects Rwanda’s extremely organic culture.

At the same time, however, the team wanted to add more than a small hint of sophistication into the mix as well! In the finished product, this goal is apparent in every space. This is partially thanks to the unique and interesting shape of the private rooms, which are spherical. The public spaces, on the other hand, have a slightly more modernized look that’s sustainable and contrasting to their surroundings but also subtle enough to blend well with the more traditional areas from space to space.

The overall effect is a comfortable design that celebrates modern luxury and local culture all at once. This heavily influences the guest experience, as the lodge has become notorious for the way it actually offers visitors a way to bond with and get to know pieces of Rwandan custom, art, and culture in a way that’s immersive but comfortable and welcoming.

The look, shape, and style of the lodge aren’t actually the only elements that have something quite unique about them. The manner in which the volumes had to be constructed to protect the integrity of the surrounding area and park was also a little unconventional.

First, the pieces of the lodge were developed as prototypes in Cape Town, South Africa, in spaces where designers lived close by and access to space and materials was easy. Once the team had everything just as they wanted it, the final product versions of the lodge’s volumes were taken apart, sent to the chosen site in Rwanda, and reassembled there.

Since the site of the lodge is quite remote, which is part of its pleasantness and appeal, all of the systems that power it had to be quite innovatively created. They are fully incorporated into the structures and inner workings of the lodge and they also function entirely off-grid, making the whole place independently powered and self-sustaining.

All things considered, Bisate lodge is actually quite a step forward in the world of architecture, particularly within the local area in which it sits. Besides being shockingly comfortable and serene, the lodge is also a merging place for modern construction techniques, sustainable living systems, and top shelf luxury with traditional materiality and cultural consideration.

Photos by Crookes and Jackson