On an expansive corner plot in the city of Cabreúva in Brazil, creative design and architectural teams at Taguá Arquitetura have recently finished a luxuriously open concept escape home called BT House.

Although the house is L-shaped, which is a structural shape typically used to separate homes by volume according to function, this particular house is actually open concept, without a lot of hard delineation between spaces, volumes, or functional rooms. Instead of being partitioned, the rooms are defined by the way they are intentionally situated to face the same direction.

Of course, with a patio and pool space like this house has out back, the direction that each space faces is absolutely towards the pool! This is true not only for the more social and public spaces on the ground floor, but also all the way up to the second storey where the bedrooms and private resting space areas face the same way.

This arrangement of rooms establishes a sort of physical and visual integration of interior and exterior spaces that feels incredibly continuous and very fluid in its energy and the way it moves. Not only does this create a calming connection with the pool space and the sunny blue waters, but it also highlights the beauty of the home’s own gardens, which grow lush and green around the pool.

Part of the reason the pool is made such a focal point of the house is that the owners literally listed a desire for fantastic social and leisure spaces as one of their very top priorities within their home plans, right from conceptualization. This is why designers made the pool, patio, and garden such a primary spot in the house, like a hub of rest, activity, socialization, and peace.

Besides their love of leisure spaces, the owners also wanted a home that was quick in its construction and would look clean and concise in its finished product. This largely determined the materiality chosen by design and architectural teams, resulting in that linear, beautiful system of steel pillars, beams, and slabs that can be found all throughout the house, from roof to deck.

All along the northwest side of the home’s facade, where living areas face the sun and gather lots of natural light on a daily basis, designers created walls inspired by a large glass curtain to maximize on the stunning energy sunlight creates. They minimized the heat from that sun, however, by using a special glass that is capable of blocking out up to 70% of the UV rays that would otherwise flood in.

Many of the other walls are made of similar amounts of glass, and most of them slide open as well. This really hits the concept of creating integrated spaces home, which was one of the owners’ main priorities. Because the glass walls retract to eliminate almost any separation between living spaces and open air leisure spots, the house is also extremely efficient when it comes to ventilation, rather than just lighting.

The windows aren’t the only parts of the house that contribute to the sustainable systems included in the house. In addition to the UV blocking glass, designers also used thermoacoustic tiles, steel deck braces, steel structures in both the interior and exterior walls, rainwater recycling cisterns, PVC frames, and solar energy panels for lighting and power.

Another interesting feature of the house’s actual shape itself is the way the “L” allows the garage to give the patio and pool area a little bit of extra privacy thanks to the way it is situated compared to the street and the view from the public sidewalk. This means the steel and glass facade of the house is very apparent in the visual fabric of the street-scape, making it stand out as an example of contemporarily beautiful home architecture.

The combination of materiality and atmosphere is another aspect of integration very present in the house, similar to the blending of interior and exterior spaces that takes place all across the back of the building. The industrial influence that’s inherent in the steel structures creates a beautiful contrast and sense of balance against the backdrop of the peaceful, stunning pool waters and surrounding garden. 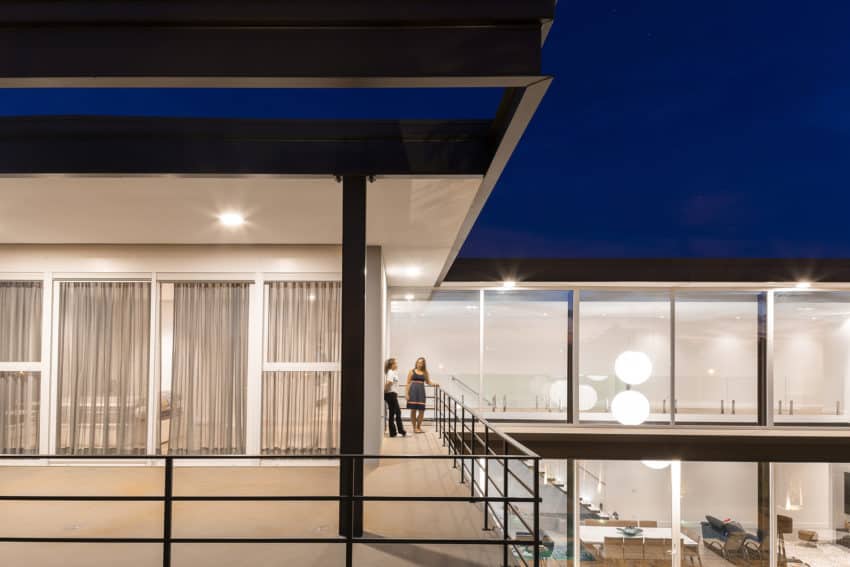 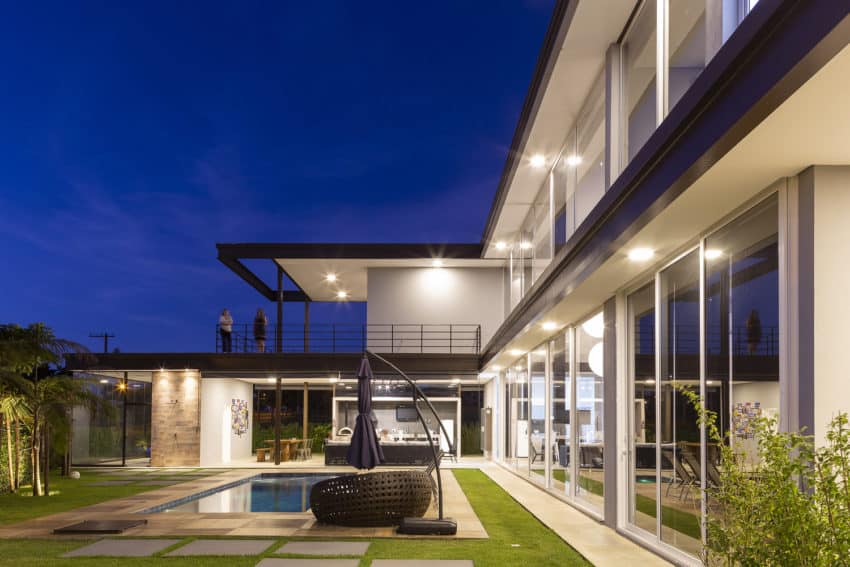 Because the designers saw the clear industrial aesthetic revealing itself early on, they opted to make it thorough by rolling with in the decor scheme as well. This gives basis for the wonderfully cabled floating staircase, concrete benches and elements in the main living room by the fireplace, and the bridge-like short hallway on the upper floor leading from the stairs to the bedrooms.
Photos by Leonardo Giantomasi

Home in the Mountains of Brazil Designed by ARKITITO Arquitetura