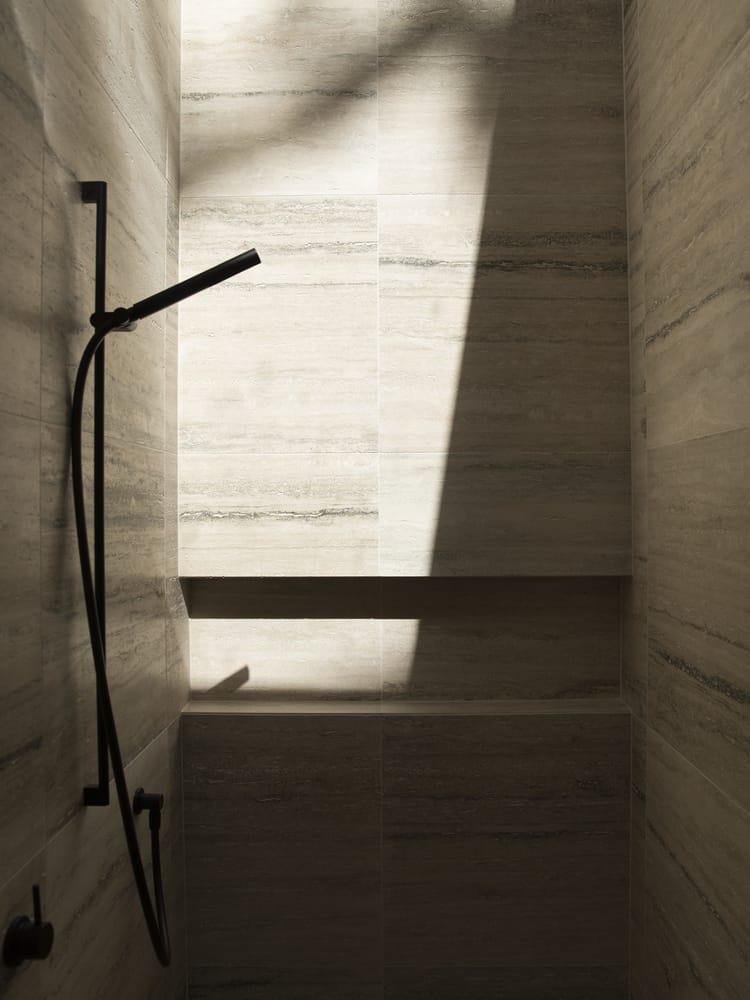 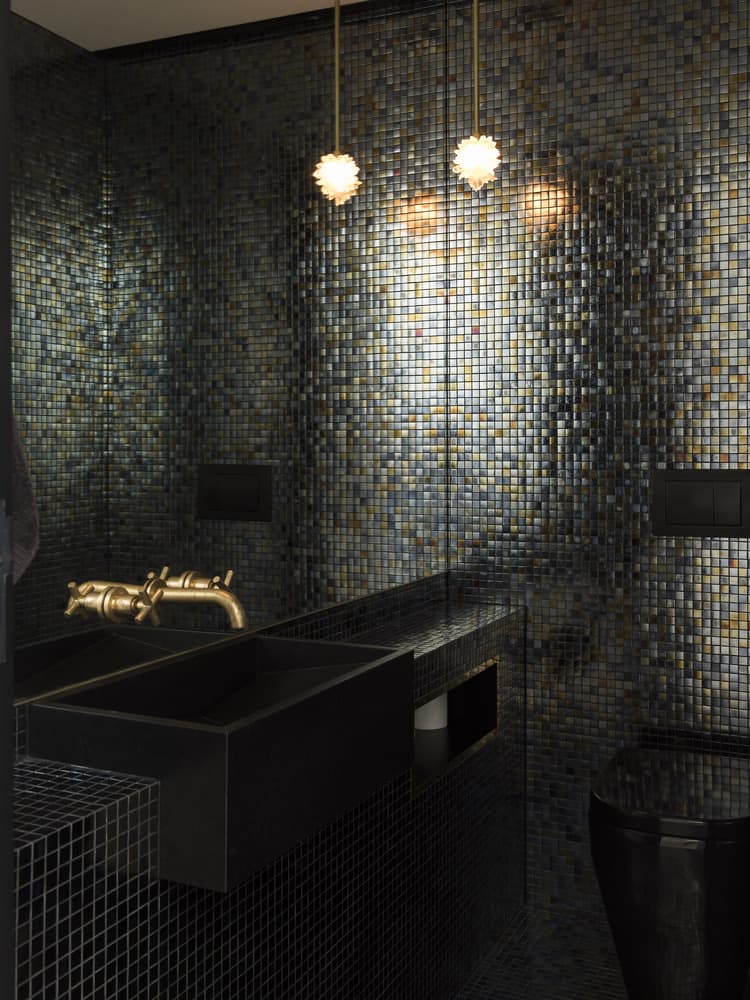 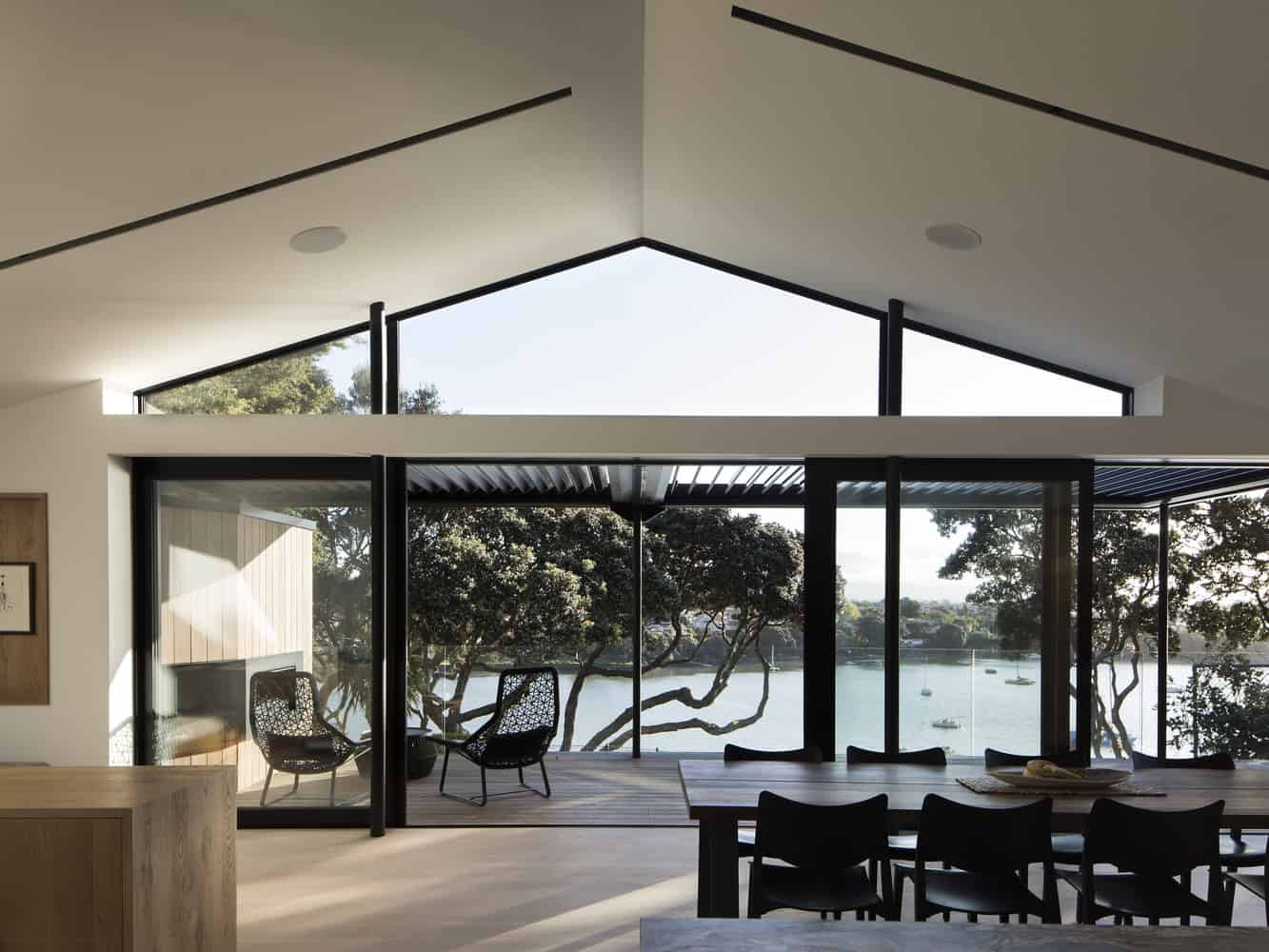 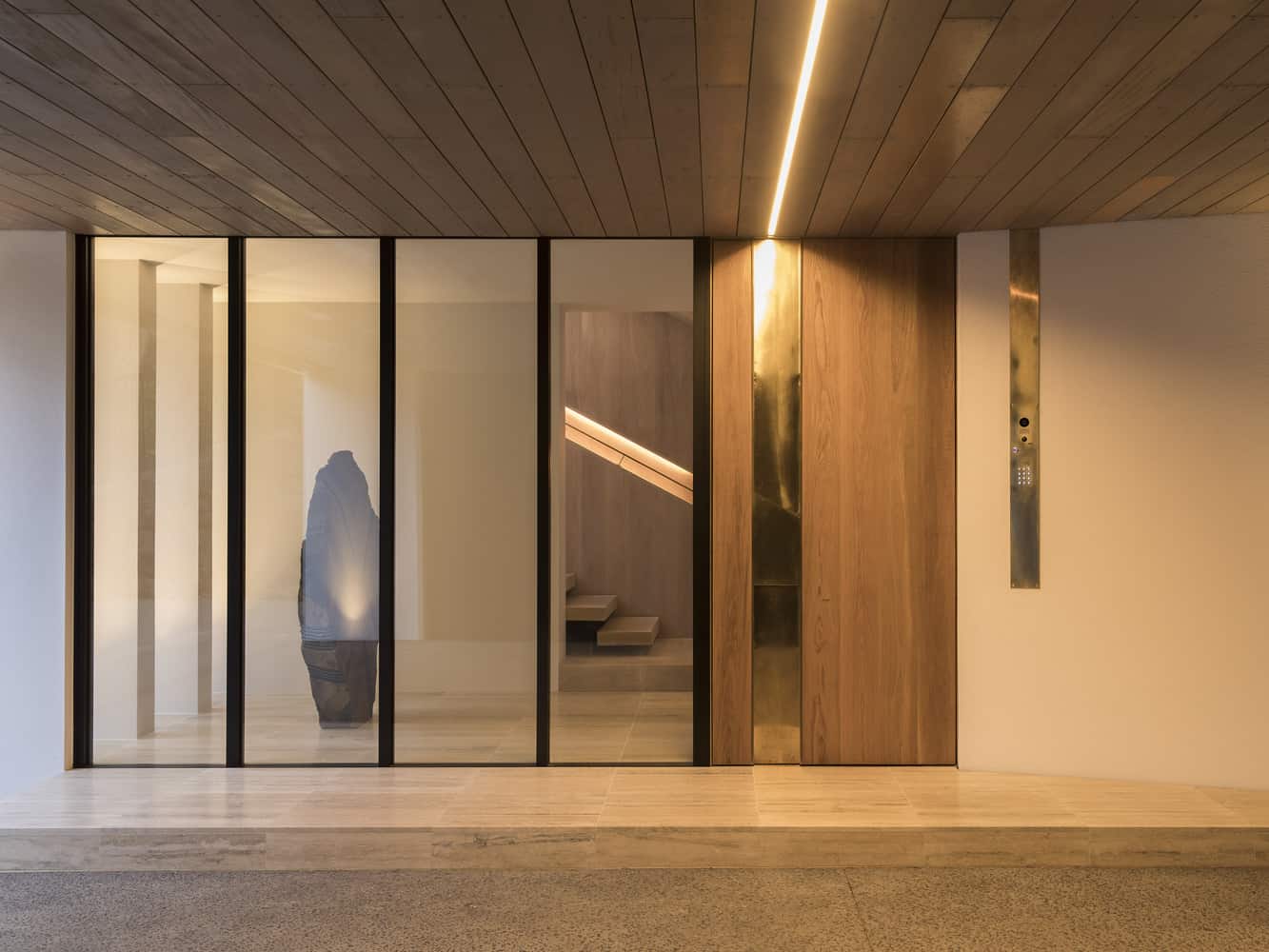 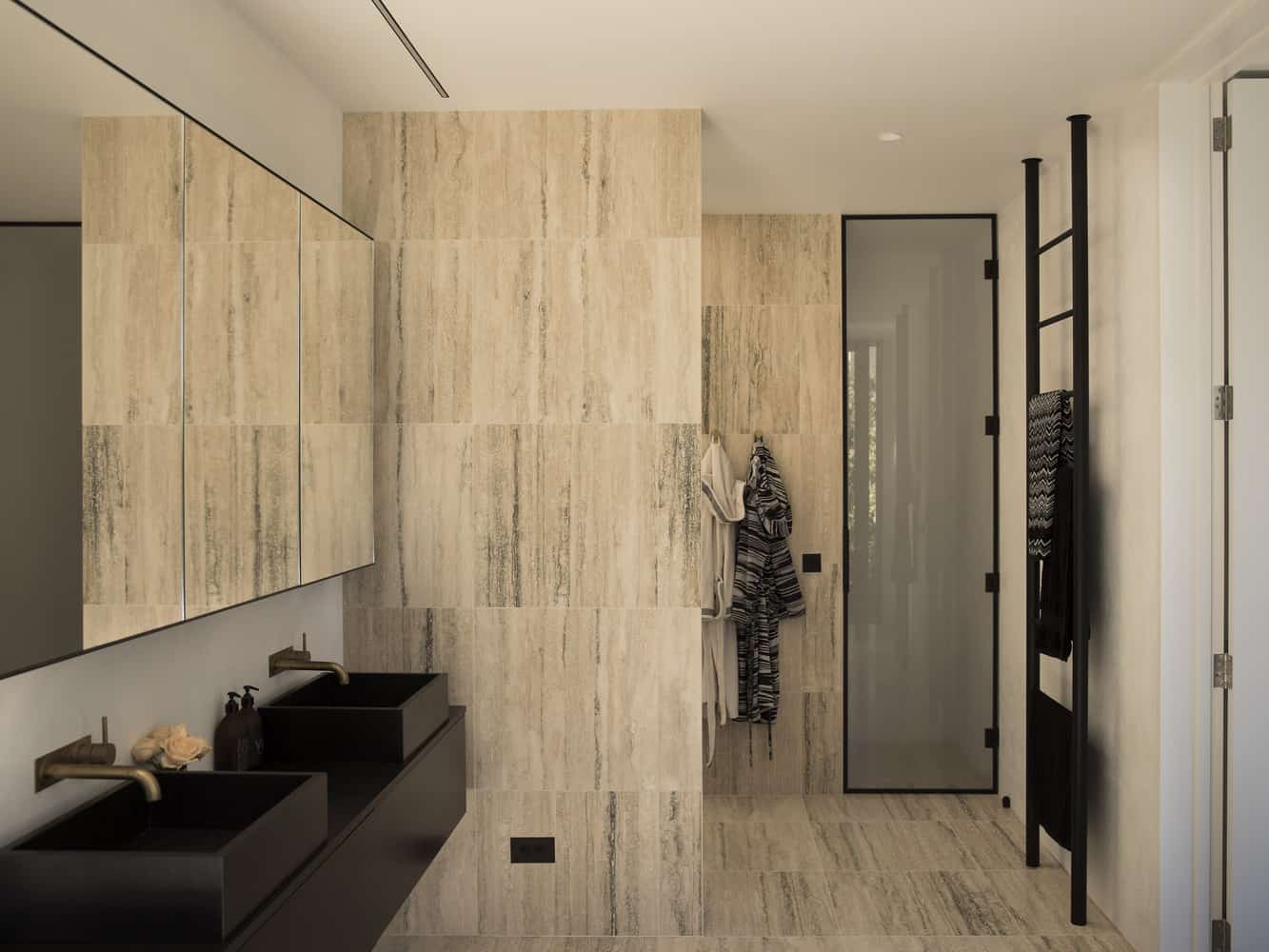 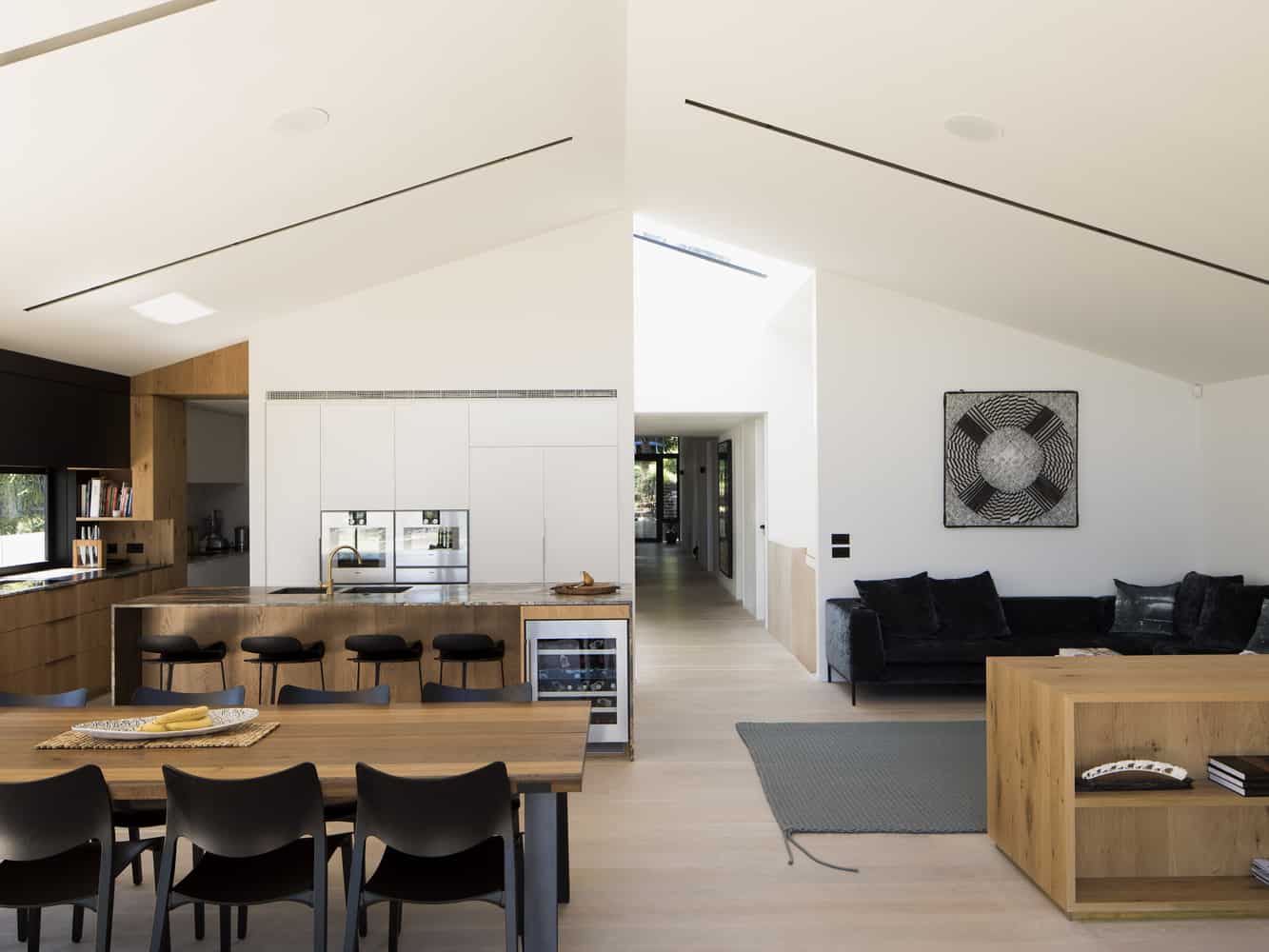 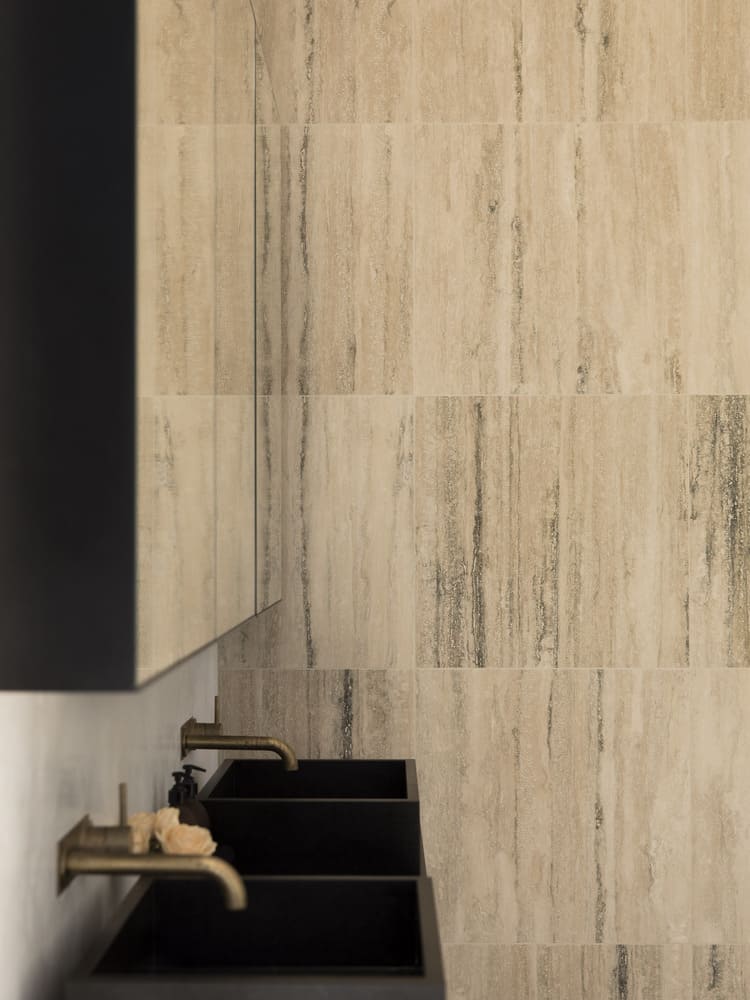 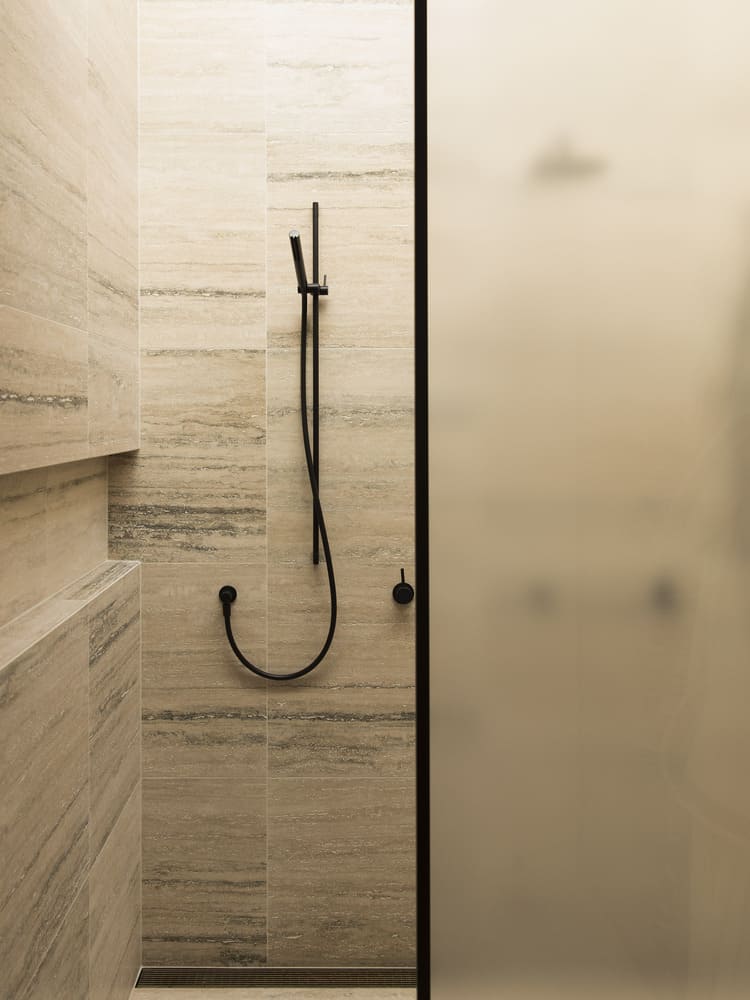 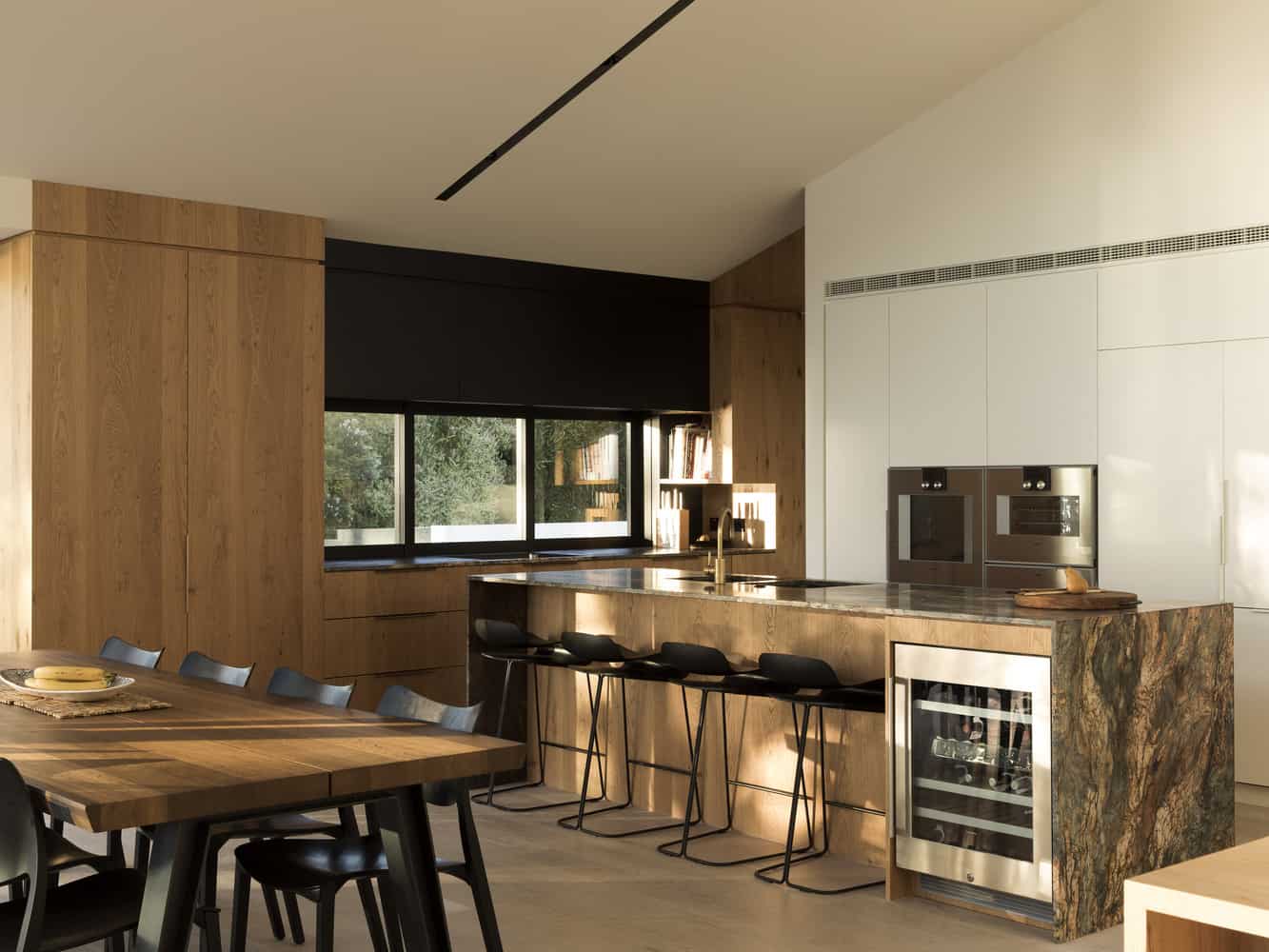 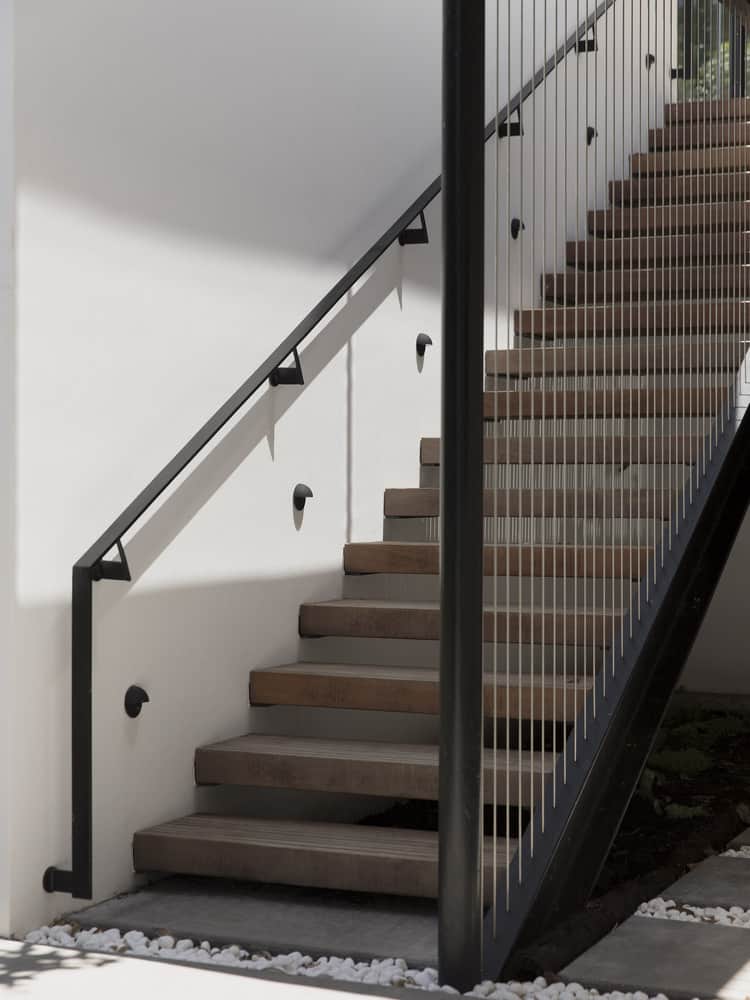 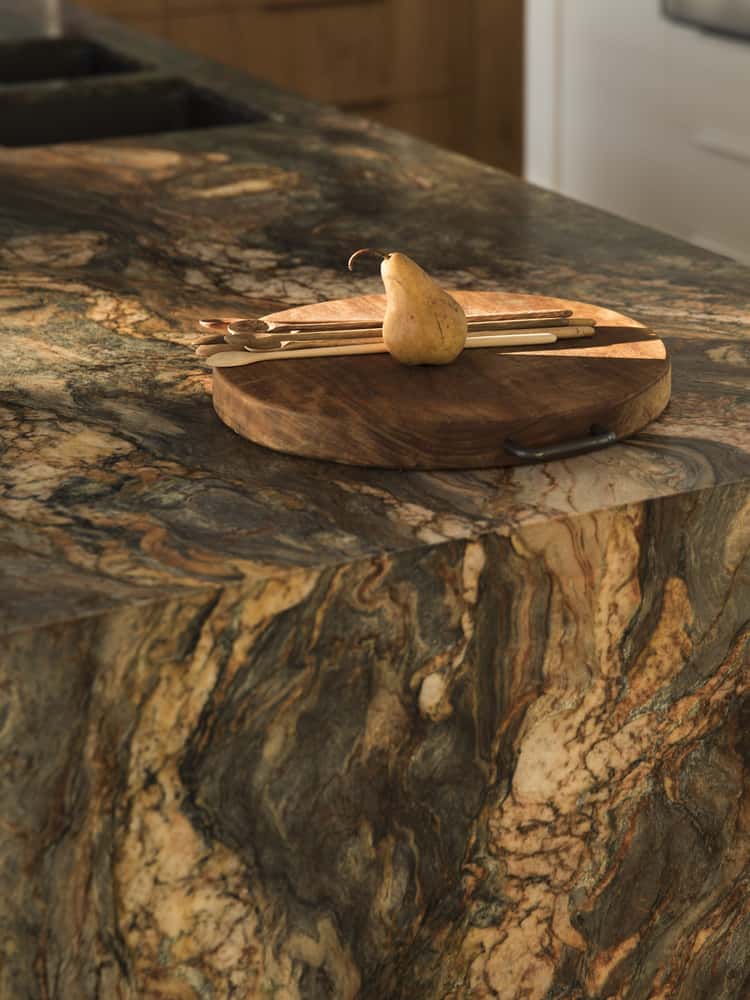 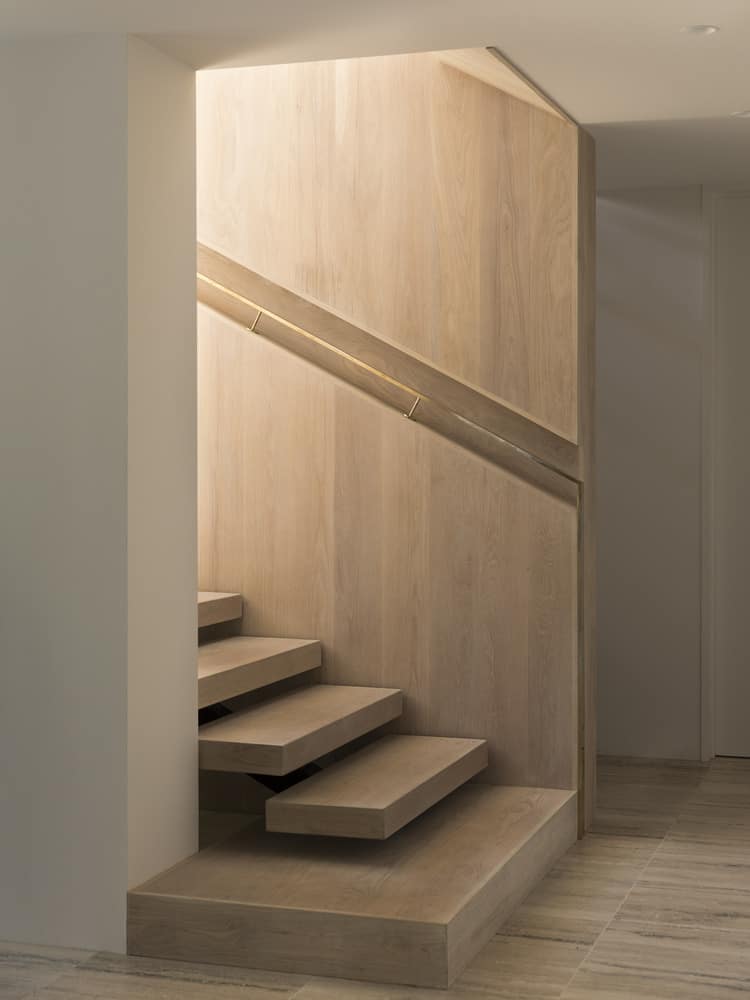 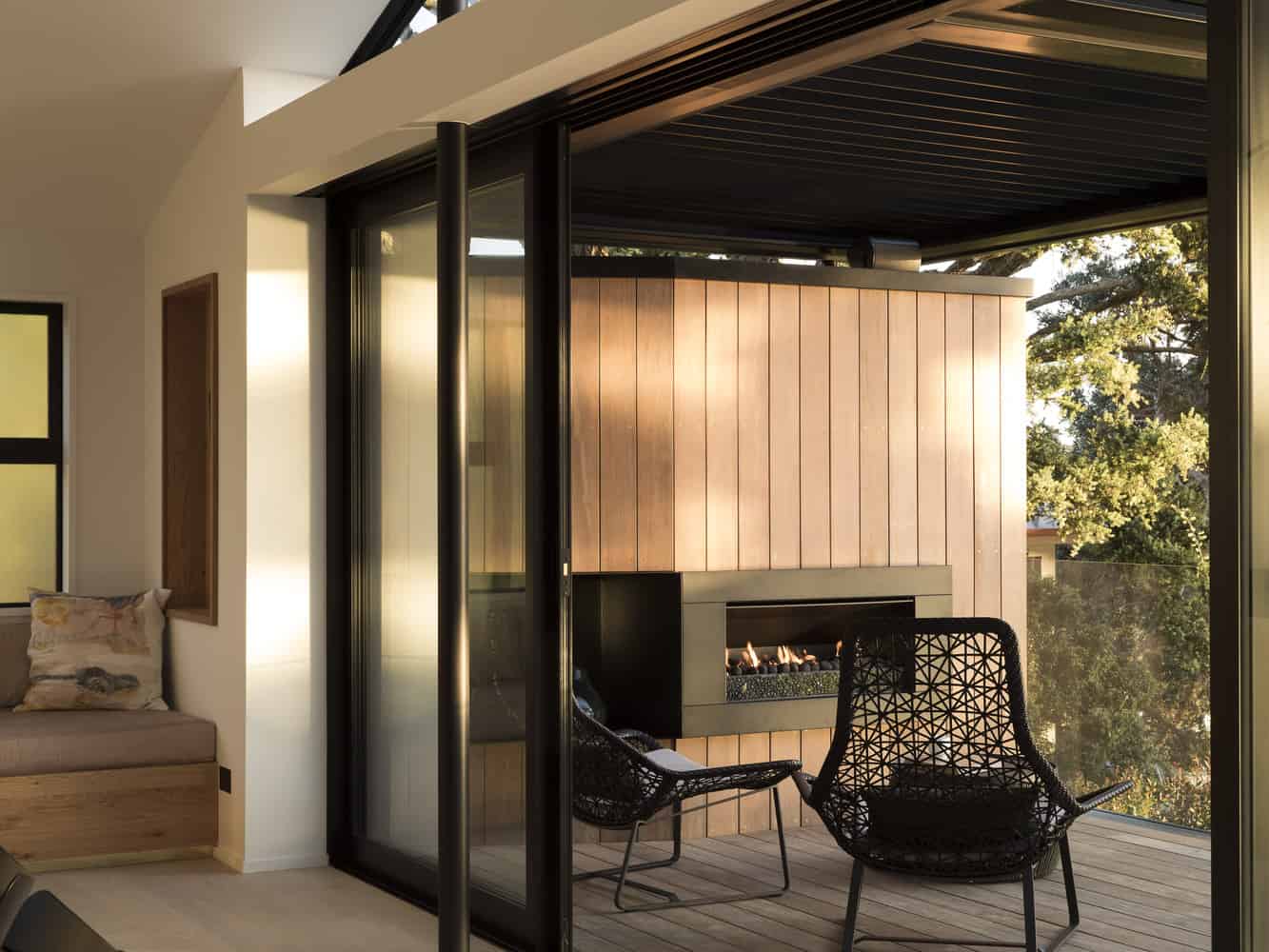 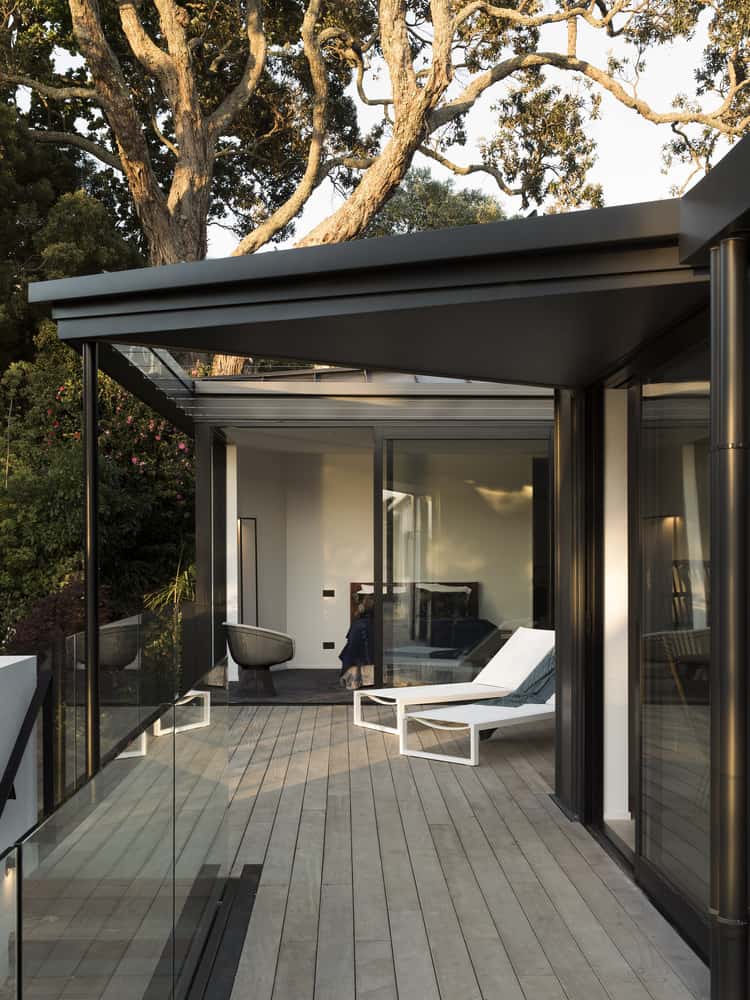 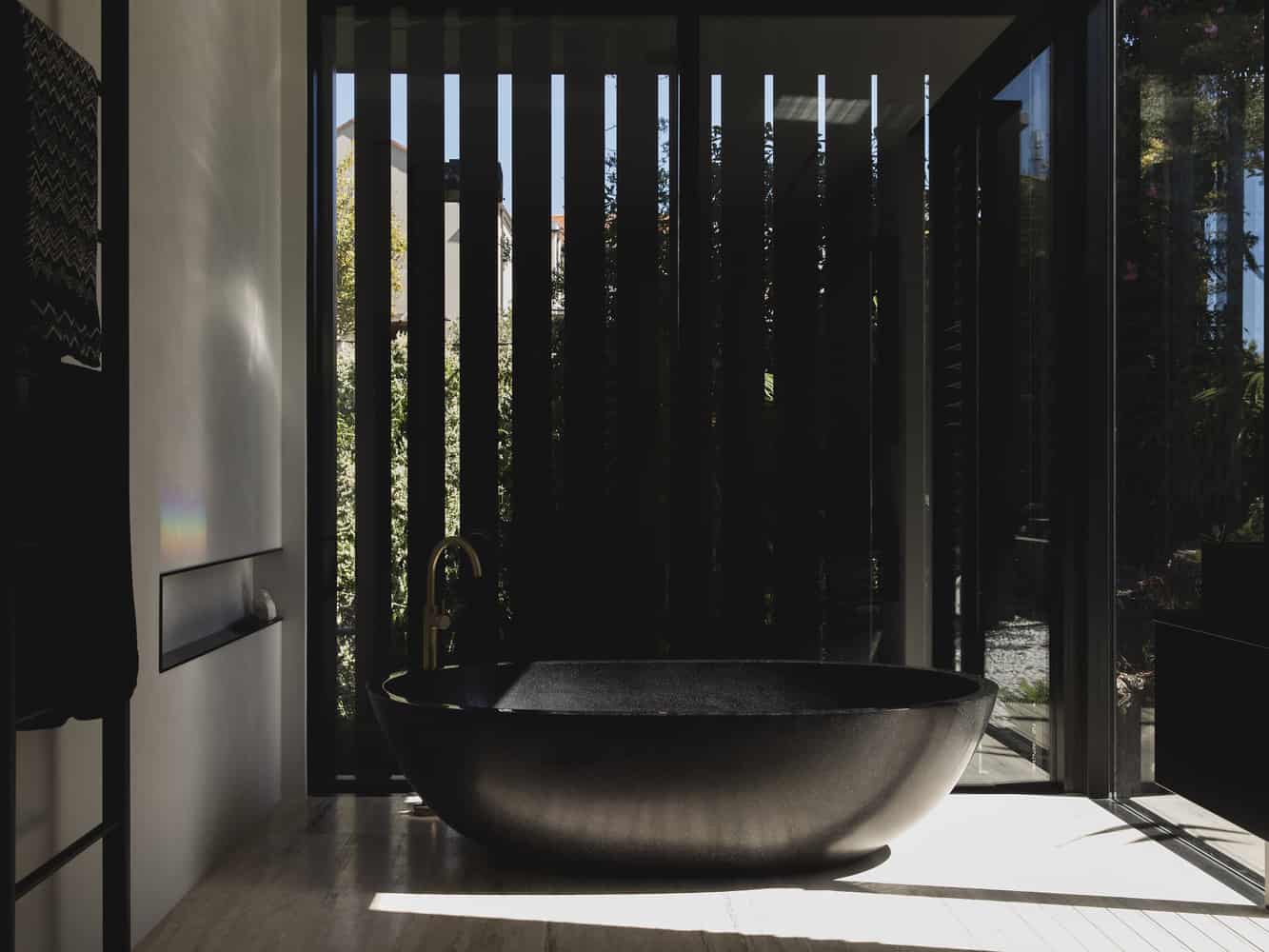 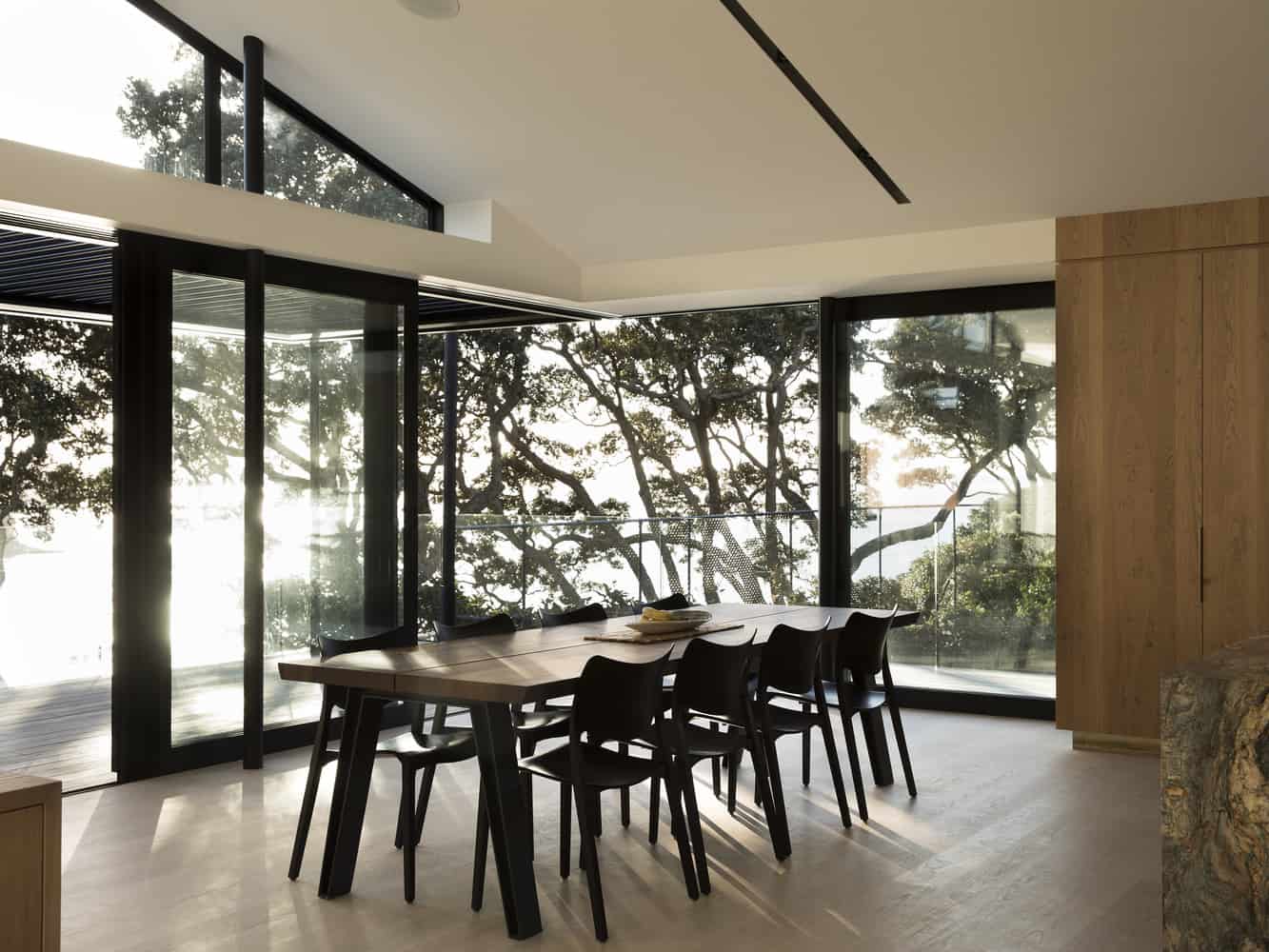 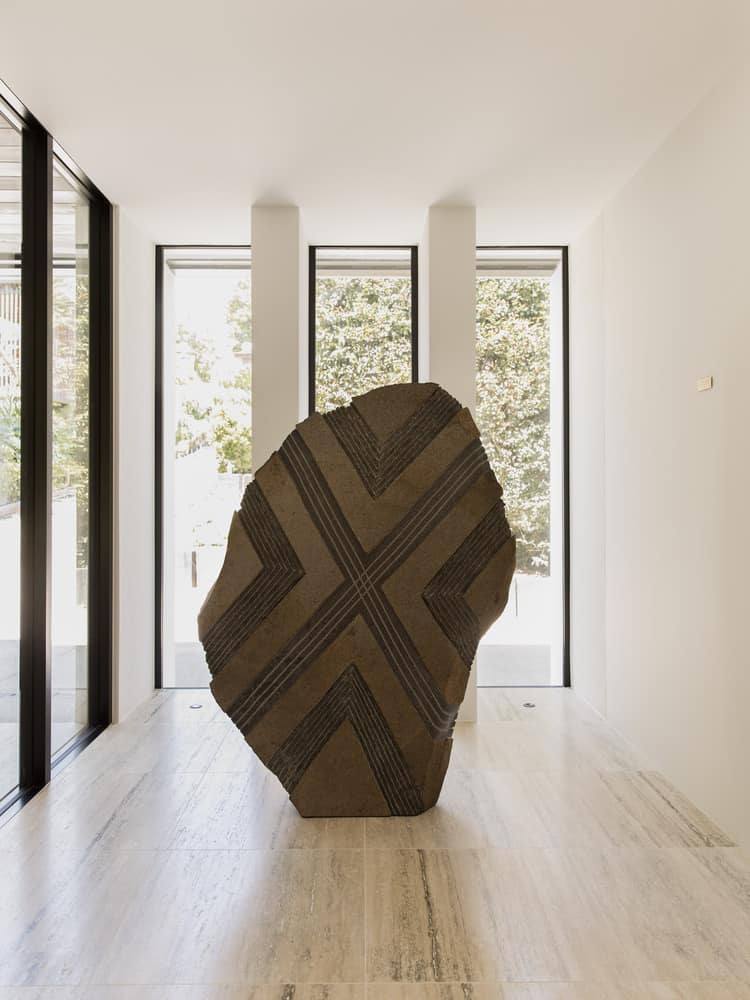 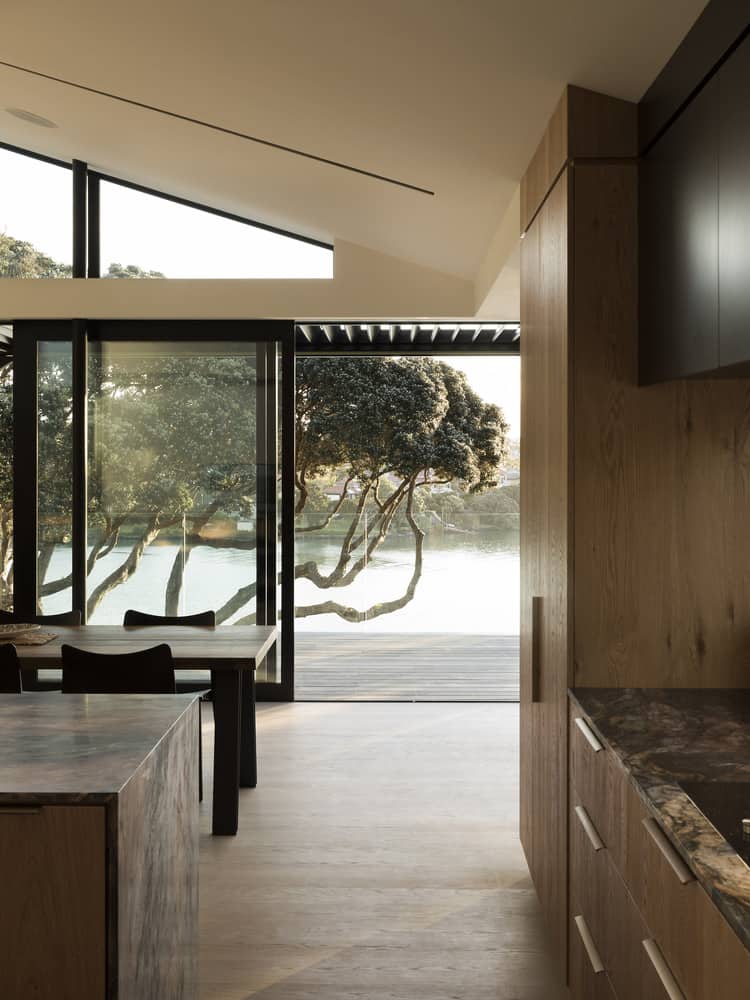 Located in Auckland, New Zealand, the Herne Bay Hideaway by Lloyd Hartley Architects is a breaktaking refurbishment project inside a 1960s brick and tile home.

The original building is nestled amidst a row of neighbouring houses, but slightly removed into its own space at the end of a long, winding driveway. Surrounded by Pohutukawa trees, the home is sat quite squatly and stubbornly smack in the middle of its plot. Before refurbishment, the building was functional but it failed to blend in any manner with the lovely surrounding landscape, giving designers a sense that it wasn’t taking advantage of its stunning view of Cox’s Bay in Waitemata Harbour.

Lloyd Hartley, head architect at his own firm, was asked by new owners to redesign this old house into a modern home that, according to his briefing, “…responds to its context and provides a private city oasis for a young family”. Hartley settled on several major design goals, one of which was the idea of creating a covered entry courtyard with a bridging to the house in order to provide the family with a pedestrian friendly entrance.

At the same time, this transformed entry space aims to provide visitors and dwellers with a sense of release once they’ve passed the end of the long driveway (where they can appreciate an exciting borrowed view of the neighbour’s impressive private tennis courts).

In terms of the house itself, Hartley’s desire to create the illusion of extra space and extra height while also increasing natural light was a huge driving force. Designers believe this would entirely enhance overall experiences in the building, so they opened a stairwell to draw in light from above. They also extended ceilings in the main living areas to fully embrace natural light and stunning outlooking views from the back.

Perhaps our favourite feature of the house is the way Hartley’s and teams linked indoor and outdoor spaces through the use of relaxing deck space. Visitors and family members can take in the beauty of the rear landscaping by sitting on ground level or upper decks, giving the house a much more free-flowing atmosphere, like you can move about the space and between indoor and outdoor areas without interruption.

In order to give the house a more timeless interior aesthetic than it once had (and to avoid the outdoor brick structure becoming dated looking all together), designers carefully selected a palette of neutral shades and natural materials. The clean detailing featured in every single room ties the house together, creating a cohesiveness that might not have been present had the chose to leave some rooms untouched while heavily modernizing others.