In a quiet neighbourhood in the suburbs of Kyoto, Japan, innovative design teams at 07BEACH recently completed a beautifully wooden and naturally peaceful feeling residential project called House in Kyoto.
View in gallery 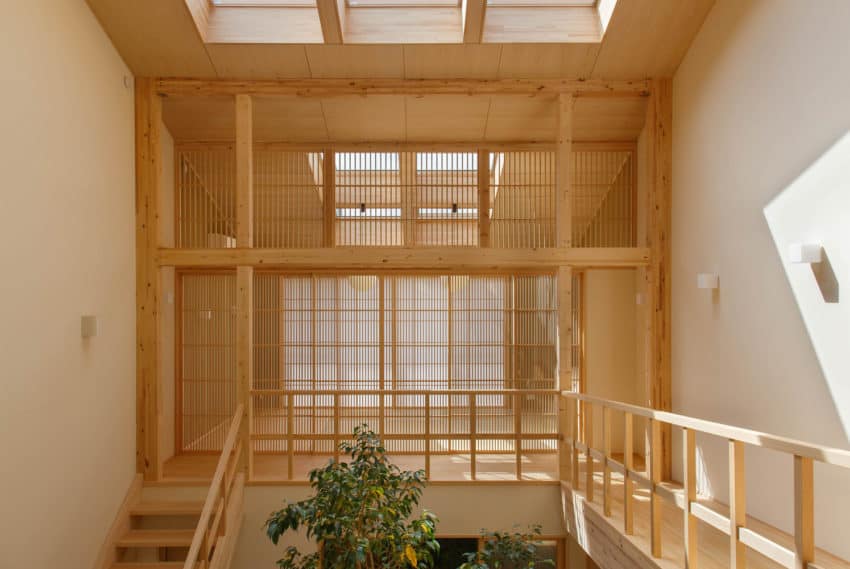 The house was not only built but also completely conceptualized from the beginning for a couple and their three small kids. Although the house is surrounded on all sides by other houses in its residential neighbourhood, designers worked to create an inner space that feels all its own. Rather than feeling isolated, however, it feels quiet and relaxing, like a retreat.

Besides a peaceful home that would provide the family with a safe, calming space in which to live their lives and recharge from their busy days, the owners’ requests were few and simple. As the planning process progressed, more desires and home goals became clear, like an open concept floor plan and lots of space for the kids to move in.

This added goal was what really influenced the blueprints for the house in the end. In fact, it’s what responsible for the complete open main interior chamber. By placing the living room in the very centre of the house and making it double height so that most spaces are easily accessible to one another if one tries, without sacrificing all privacy, designers created a space that’s ideal for keeping an eye on kids (but also family bonding, movement around the house, and energy flow).

Besides the wide open layout of the house itself, the most notable aspect of this home is absolutely the fact that there’s a tree growing right in the middle! This feature was multi-purpose. The first reason for including the tree was for aesthetic and energy purposes; the green leaves add a colour pop to the otherwise primarily natural wood scheme and the overall presence of the tree helps establish an almost spa-like atmosphere in the primary room and anywhere with a view into it.

The other reason for putting a tree smack in the middle of the house was actually slightly more practical. Rather, it was a practical way around the limitations presented by the plot of land the house was built on. You see, the only place large enough for a parking area to be built was at the front of the plot. By the time this was completed and the rest of the house was built to a satisfactory size behind it, very little space for a garden (which was one of the owners’ late arising desires) was left.

Instead of leaving the house devoid of plant life in the absence of a garden, or simply including many plants in the decor scheme, design teams opted to treat the very centre of the main interior room like a courtyard. They even included skylights and plenty of natural lighting through large windows at the top of the house, ensuring that beautiful sunlight pours down over the tree in the very centre of the house.

This kind of natural lighting actually helps keep the home a little more energy efficient than the average dwelling as well, rendering the house green in some of its functions and systems. Green systems and a green tree, which the family expects to grow in the middle along with the family in order to create a very real bond between the members and nature, really drives home the whole natural feeling theme that reaches into every corner of the house.

Of course, just by looking at the house, one can tell that materiality is quite important to the over all integrity and atmosphere of the house. The clearly notable presence of natural wood is actually where designers took the opportunity to get creative in blending aesthetics. Here, the modern structure of the very squared house meets the traditional Japanese style of homes, which fit with the family’s own history. Most wooden aspects of the home are of the classic architectural style that has been seen in the area for centuries.

Since relaxation and peace are paramount elements of the whole home’s experience, we doubt you’ll be surprised to learn that even the bathroom placement, with its sprawling bath tub, was intentional and geared towards building a spa-like atmosphere. The idea behind placing the bathroom in the centre was that its placement in combination with the big windows that give a high up view of neighbouring trees gives off an “open air” feeling, as though one is perhaps bathing outside in a nice breeze and sunshine.
Photos by Yosuke Ohtake

Modern, space efficient MO House created by DFORM for newlyweds with a future family in mind