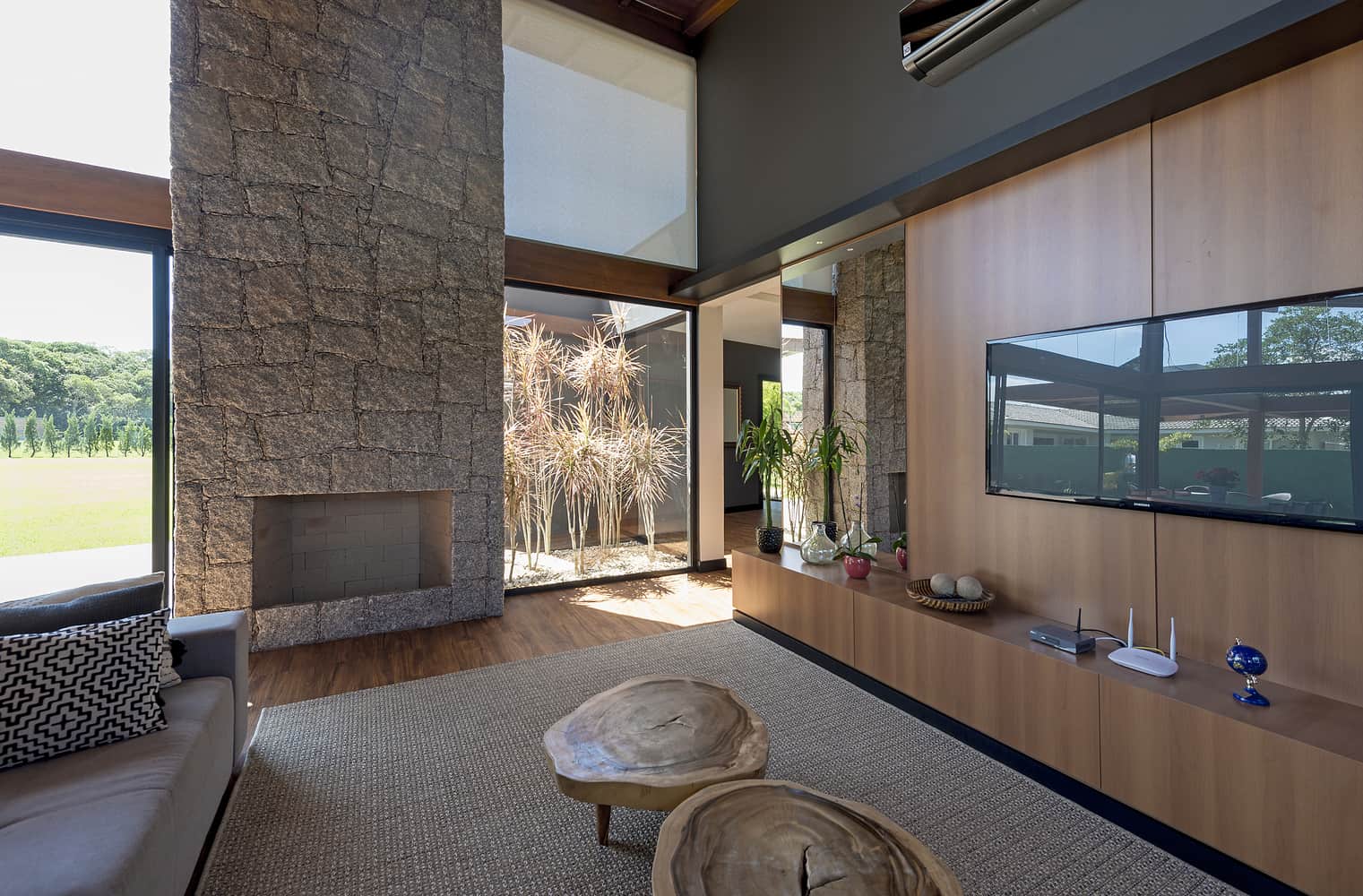 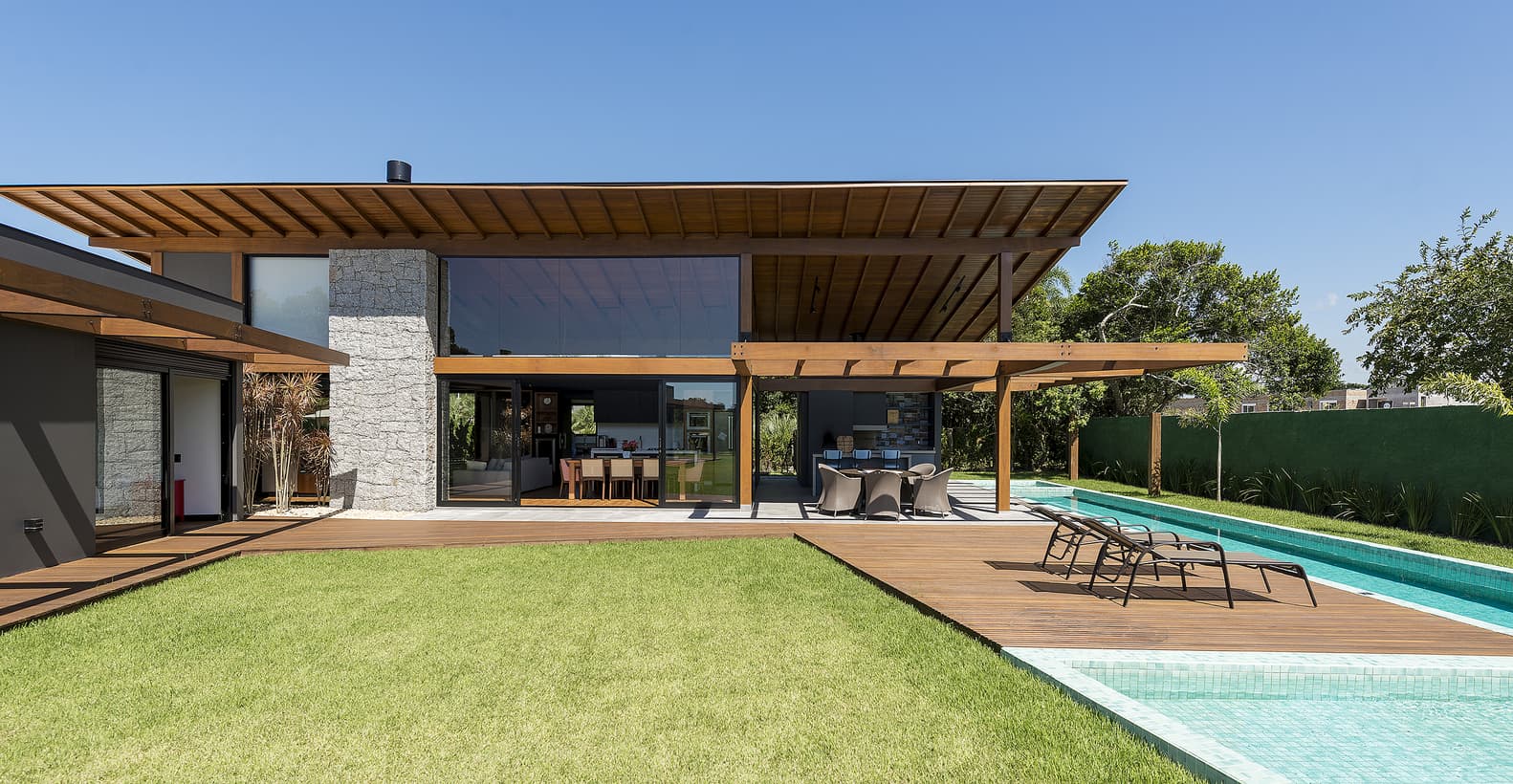 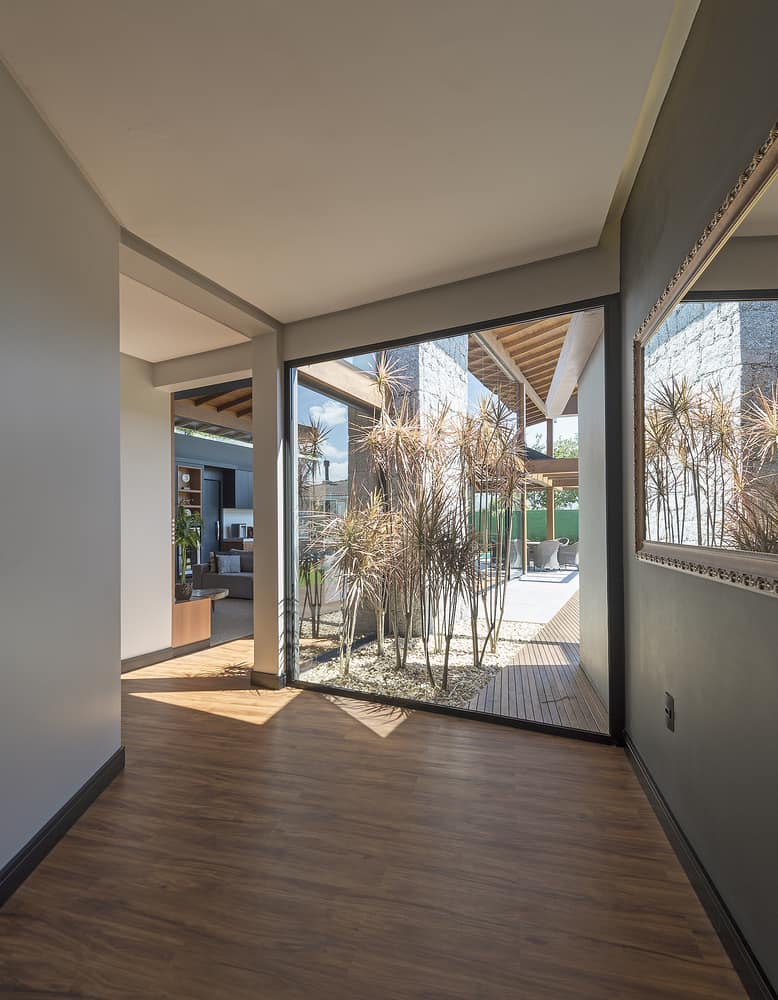 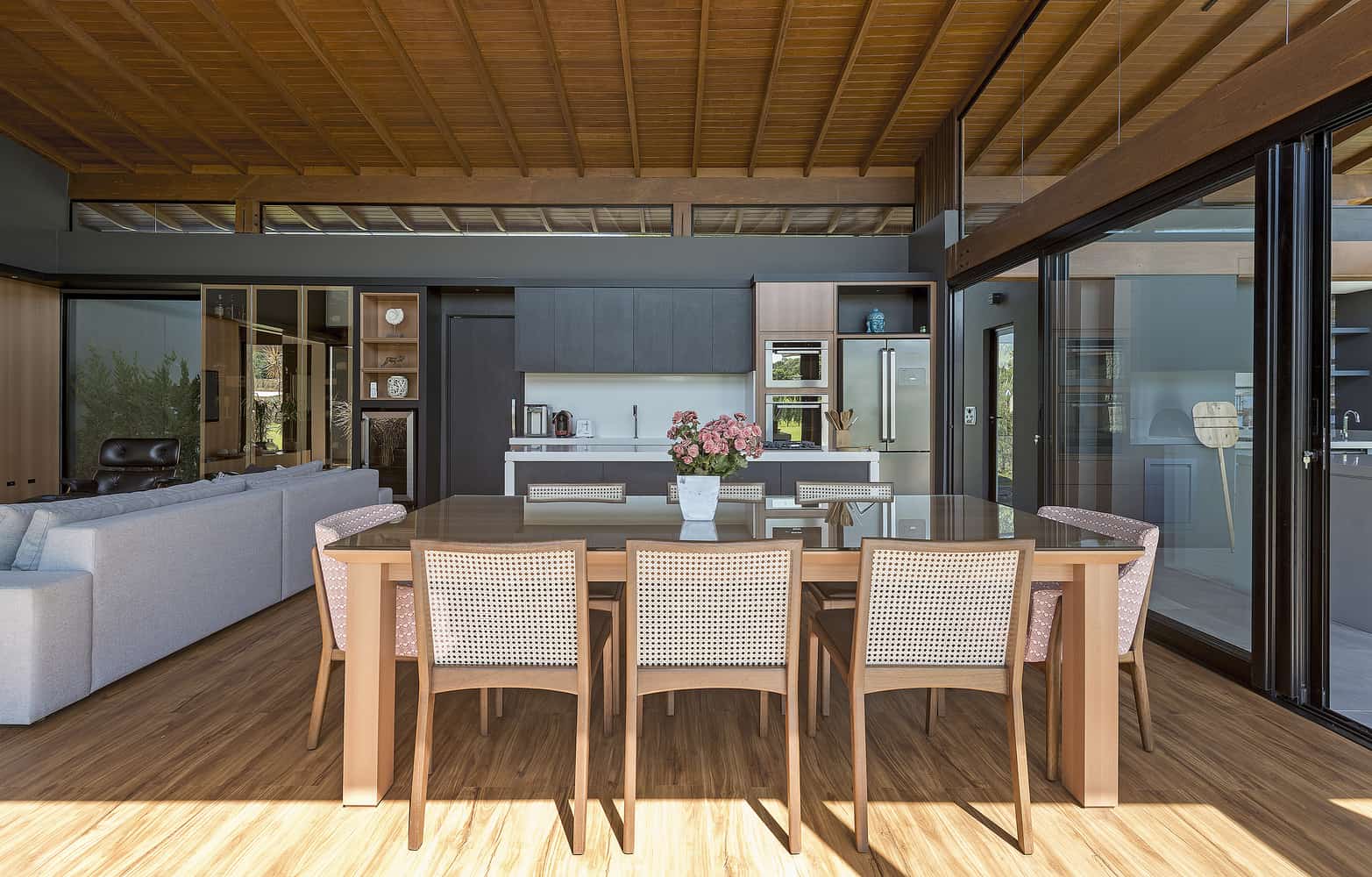 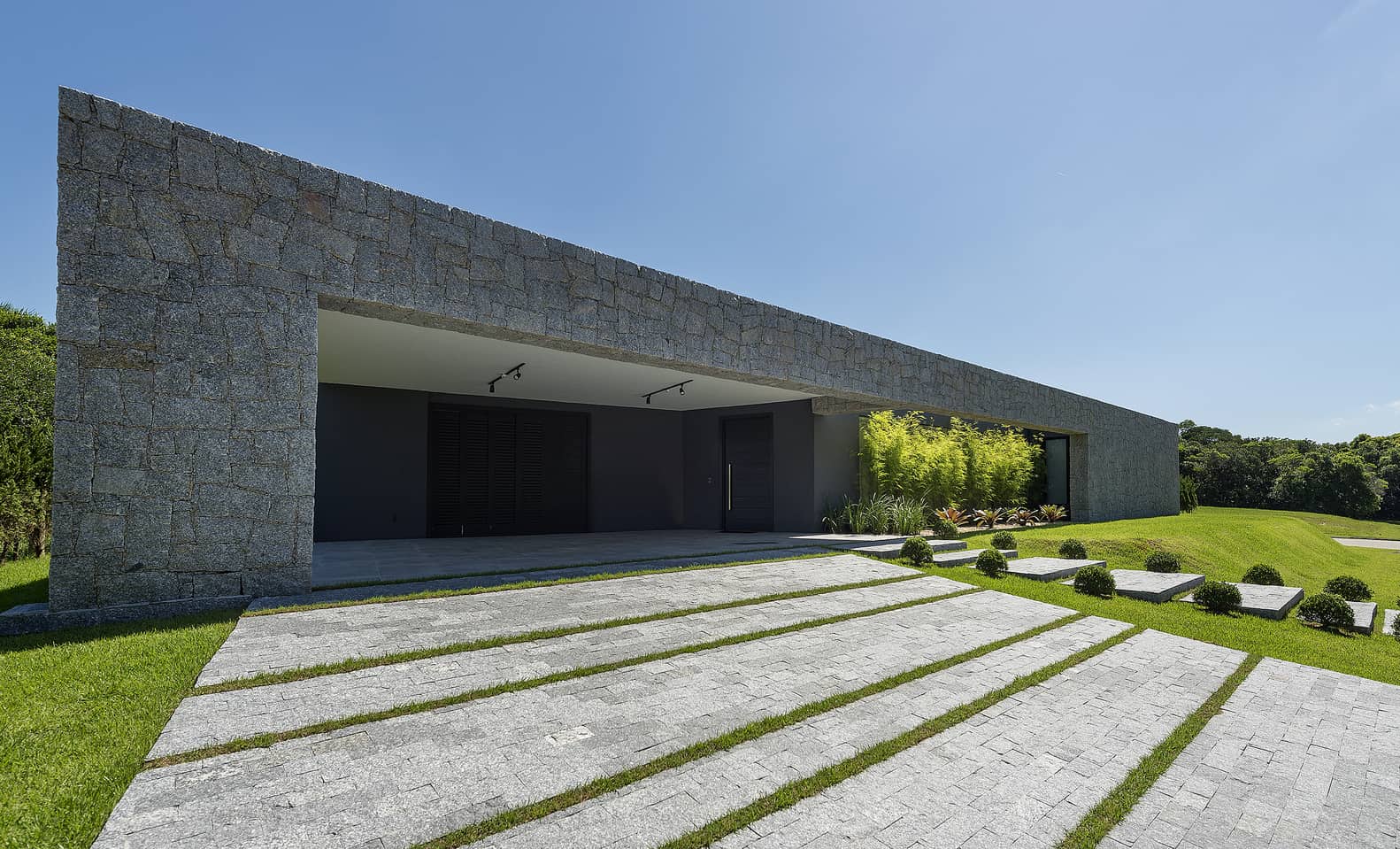 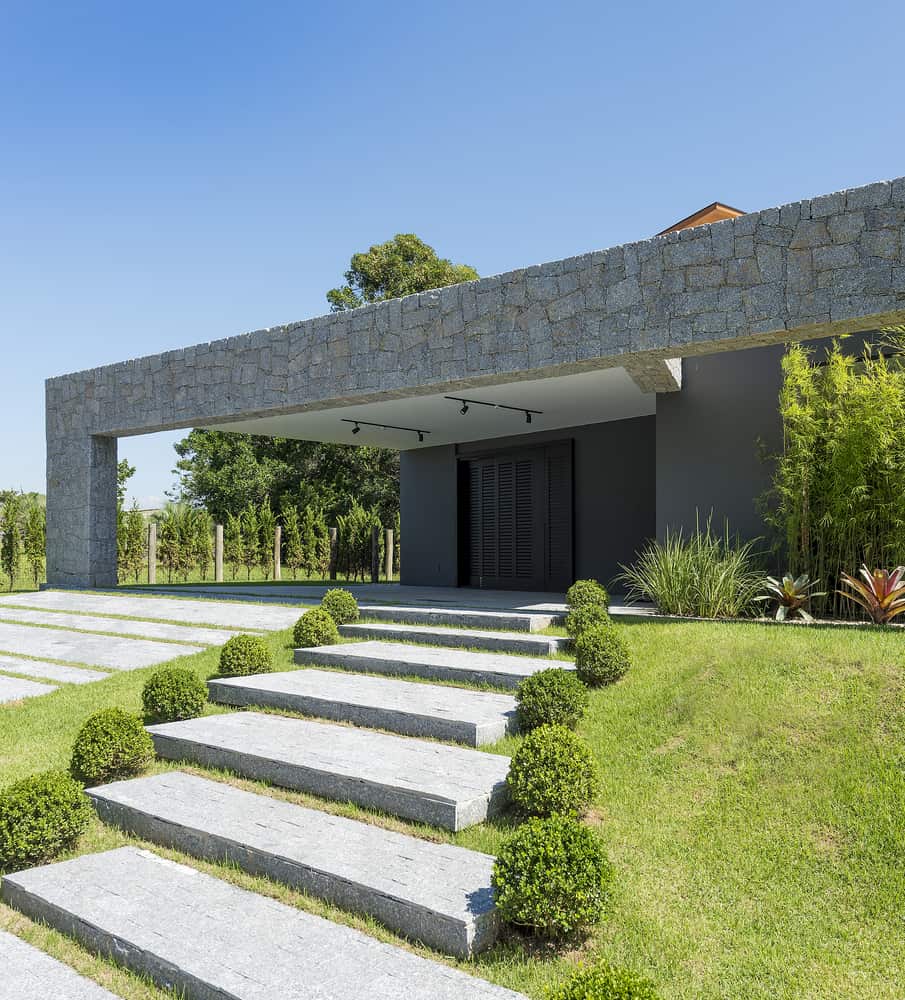 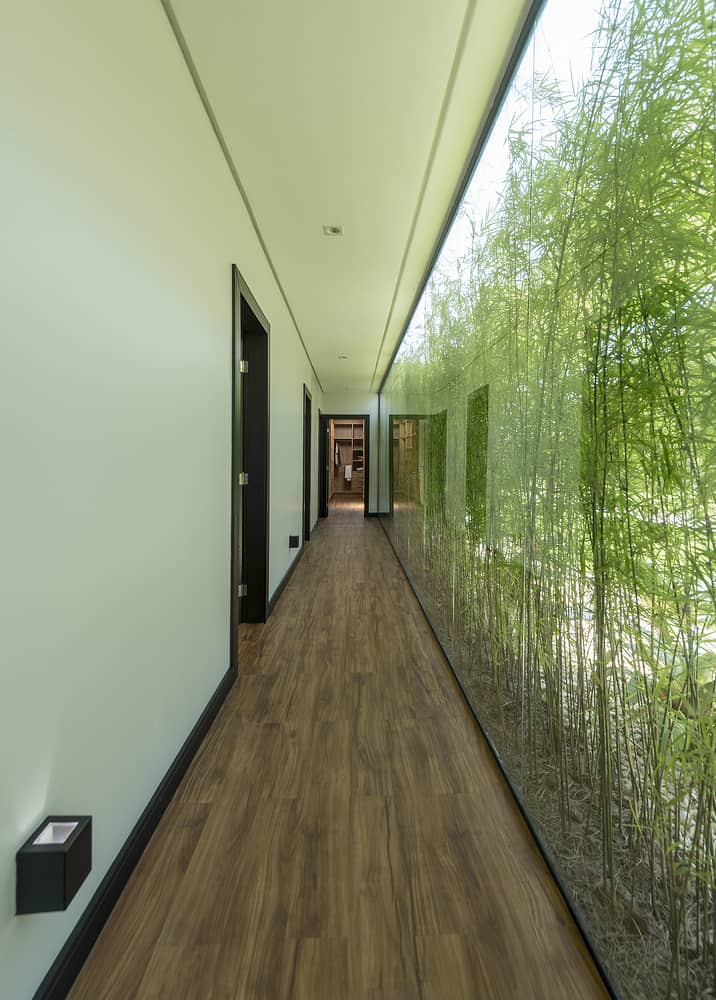 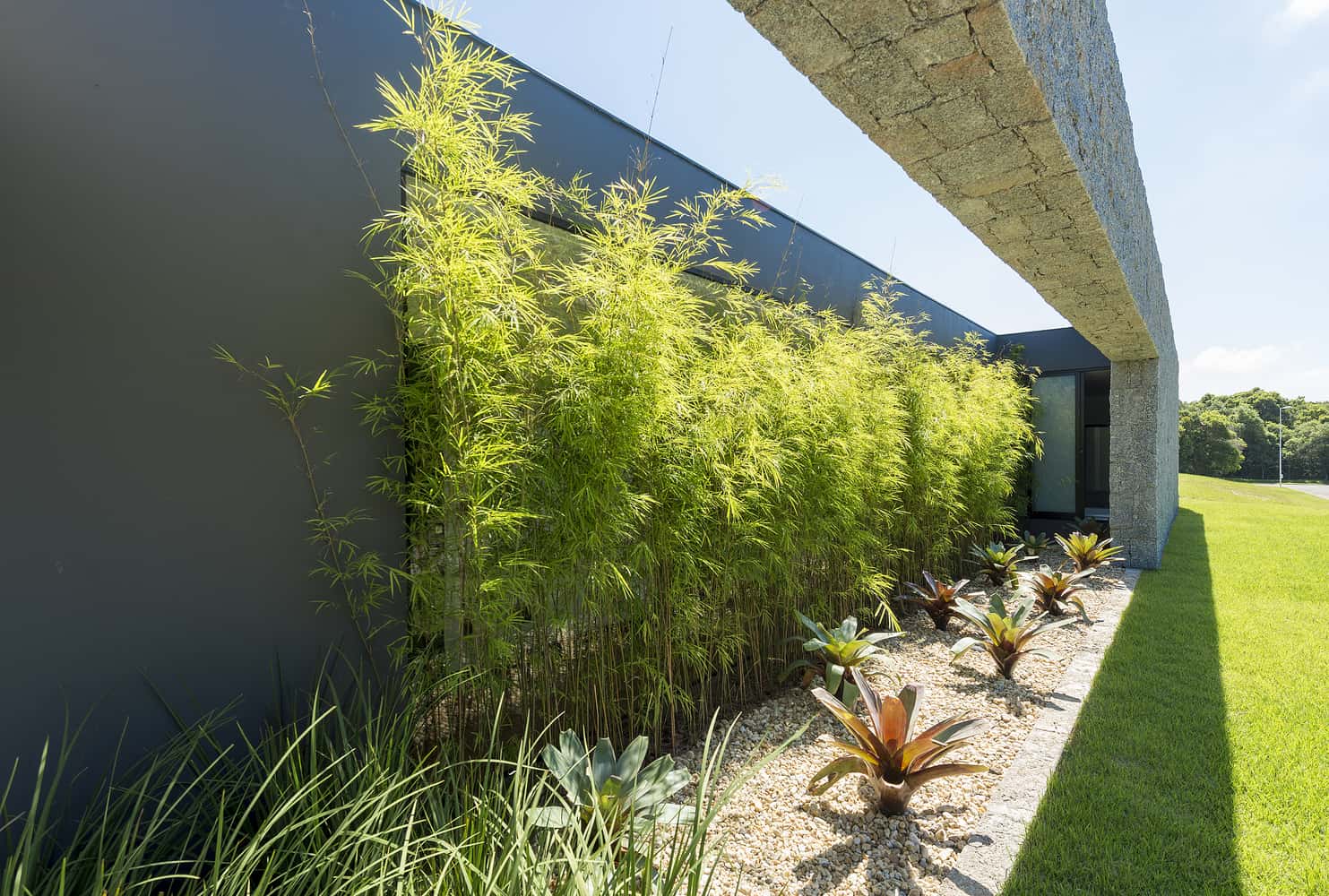 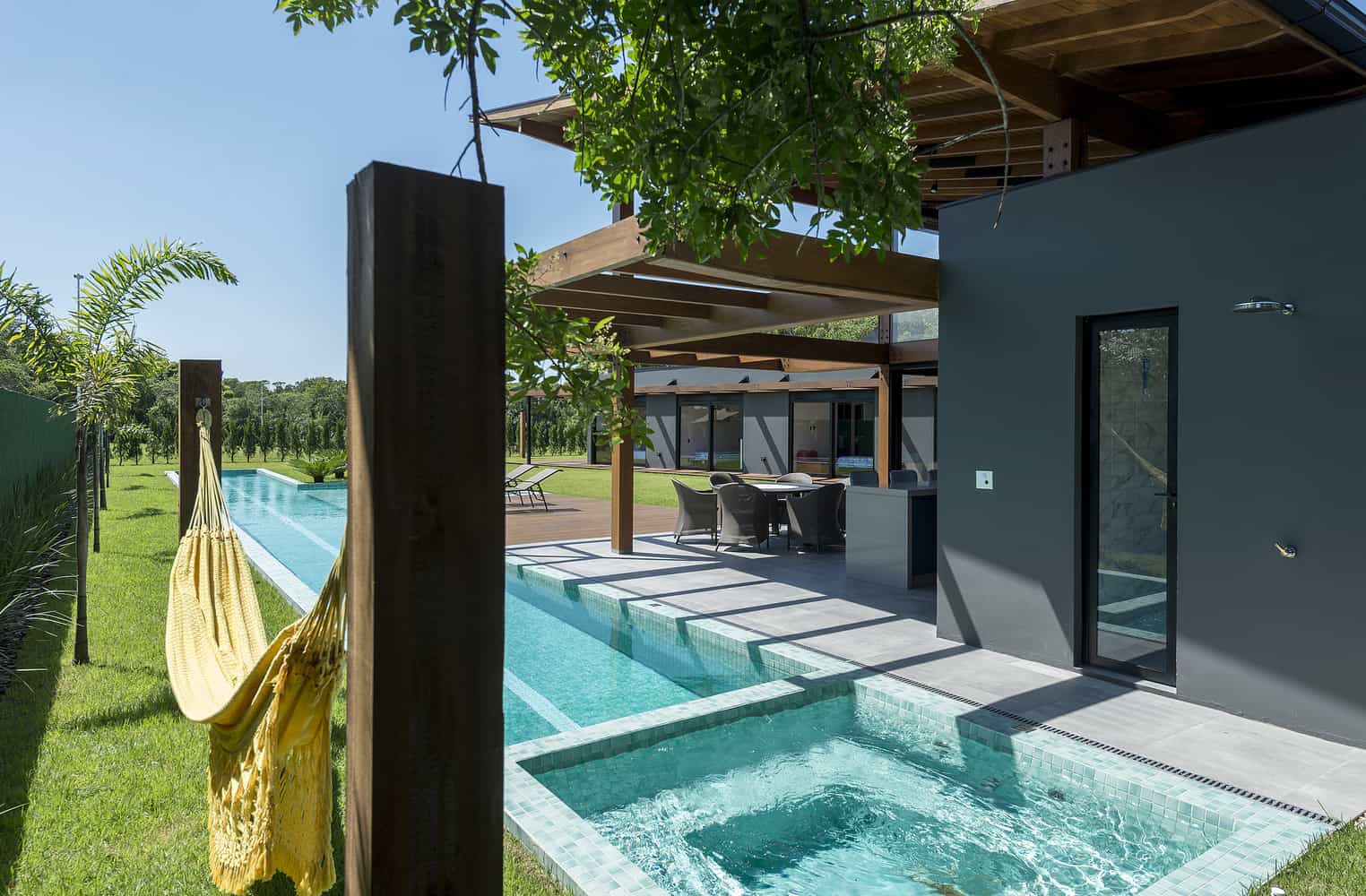 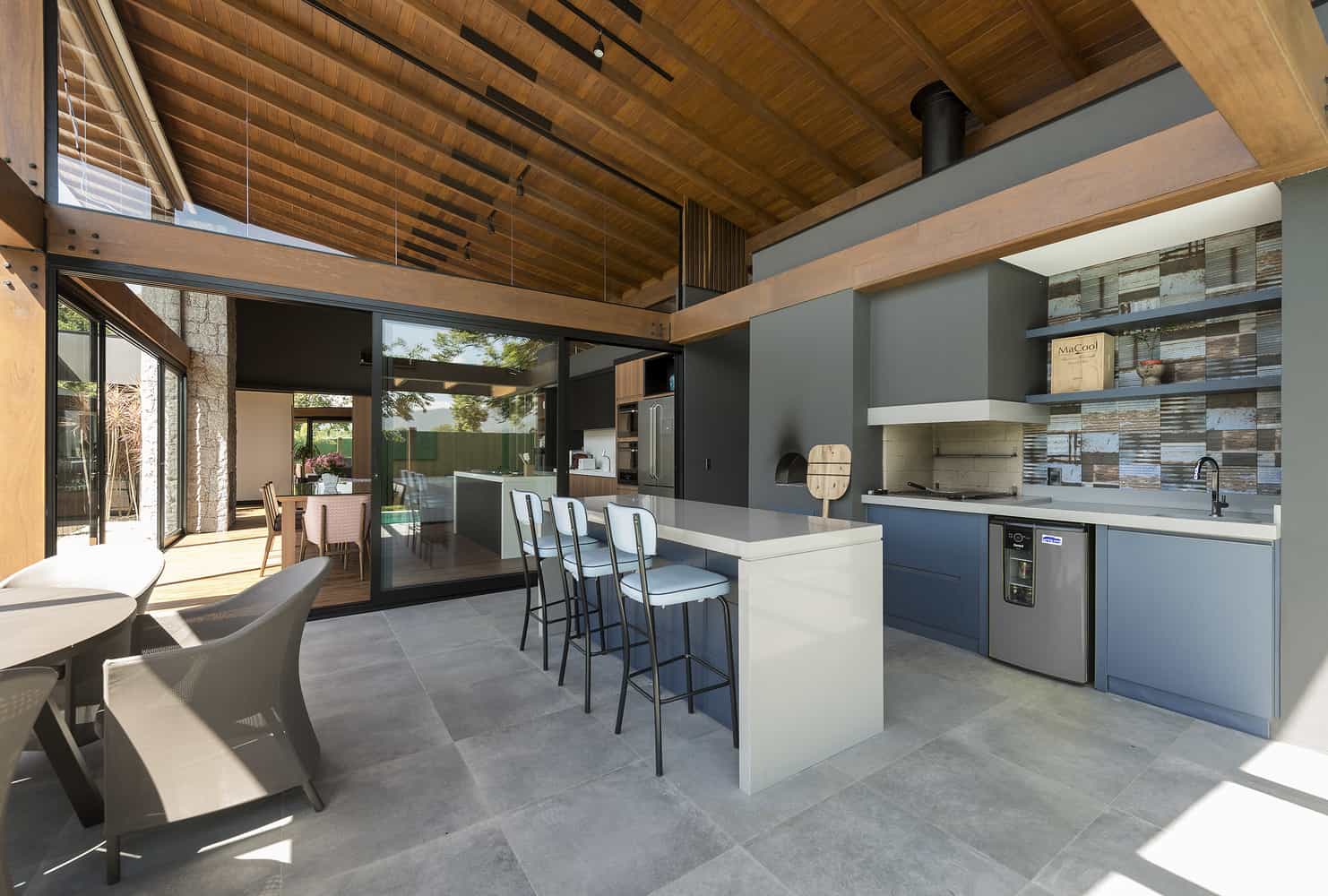 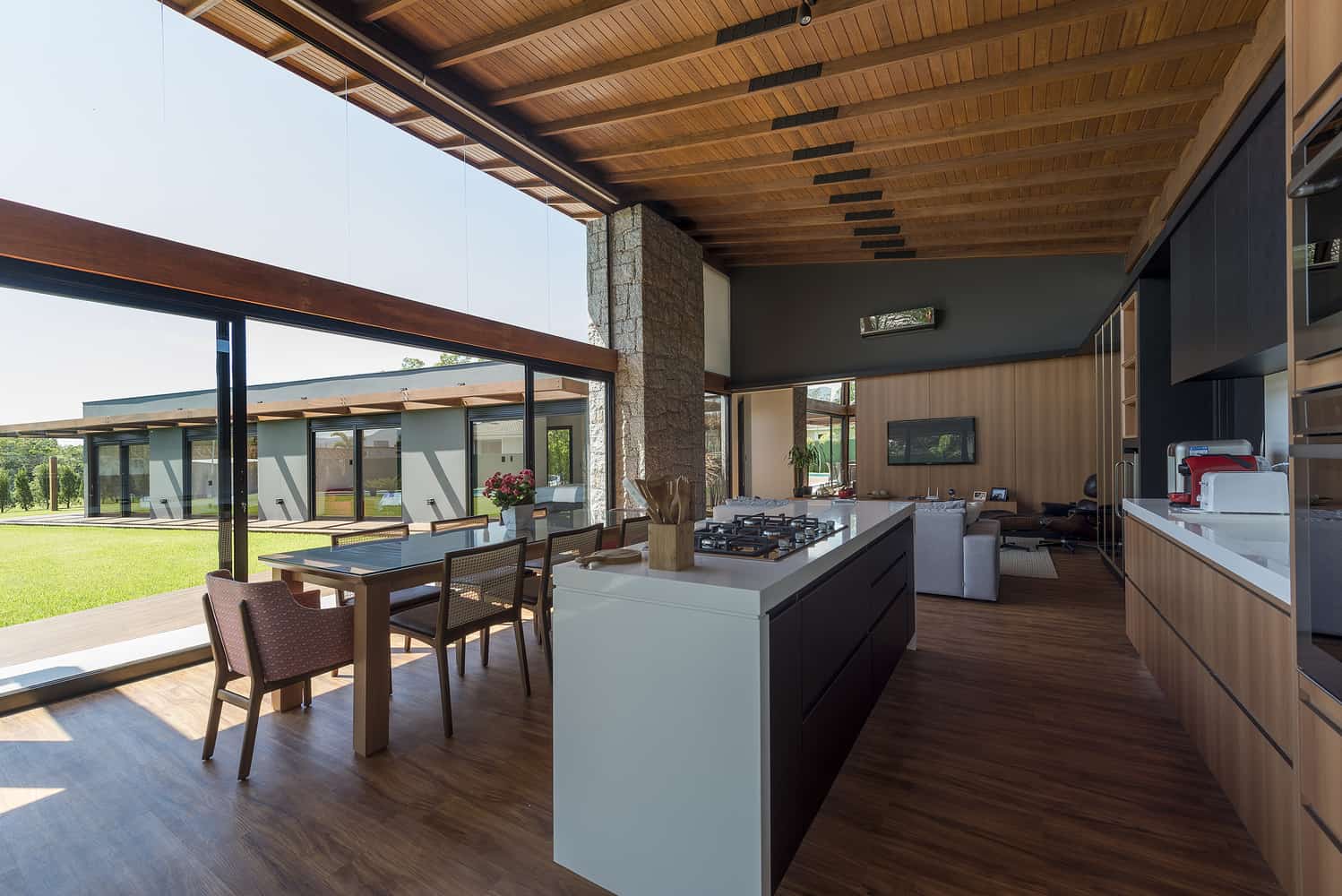 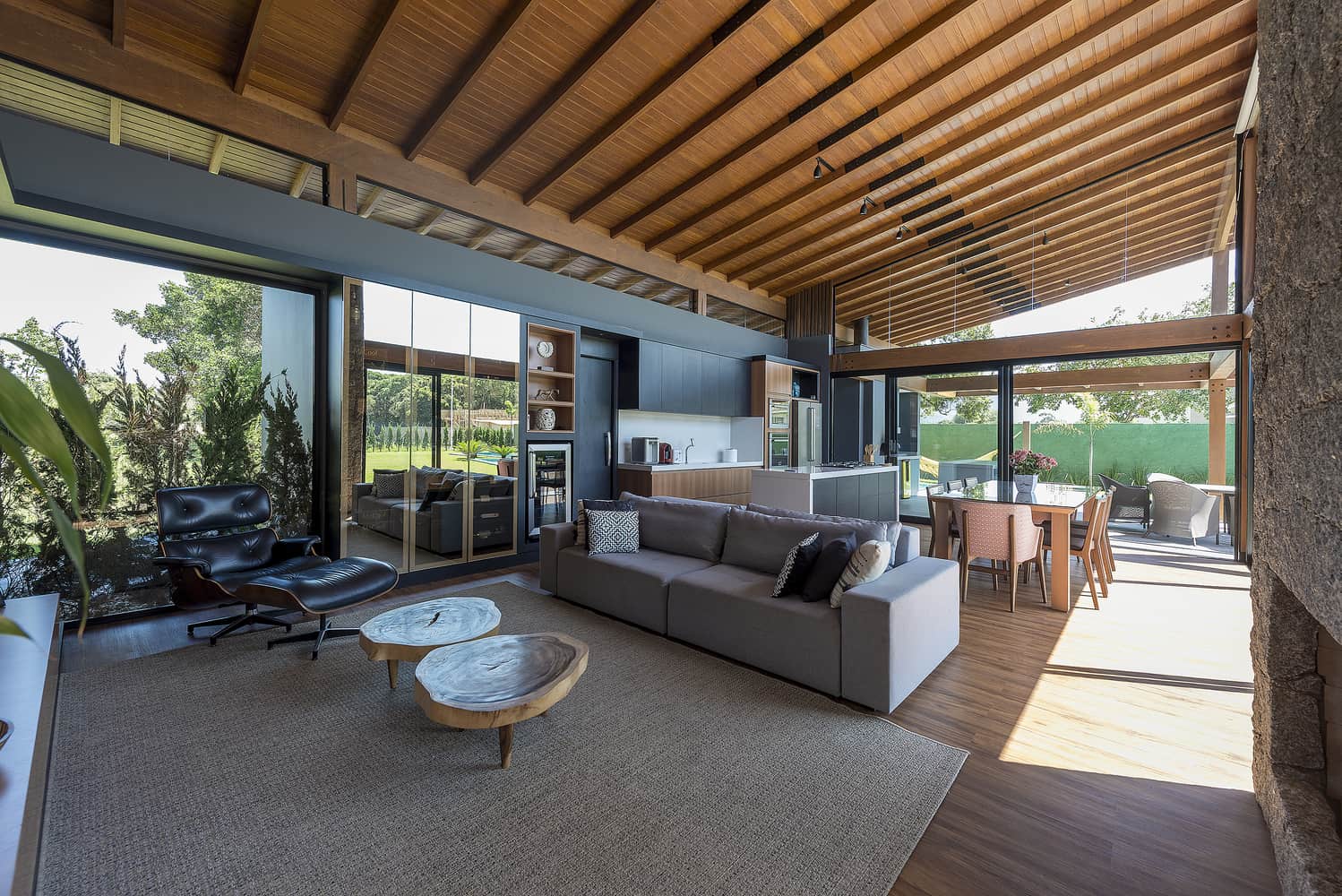 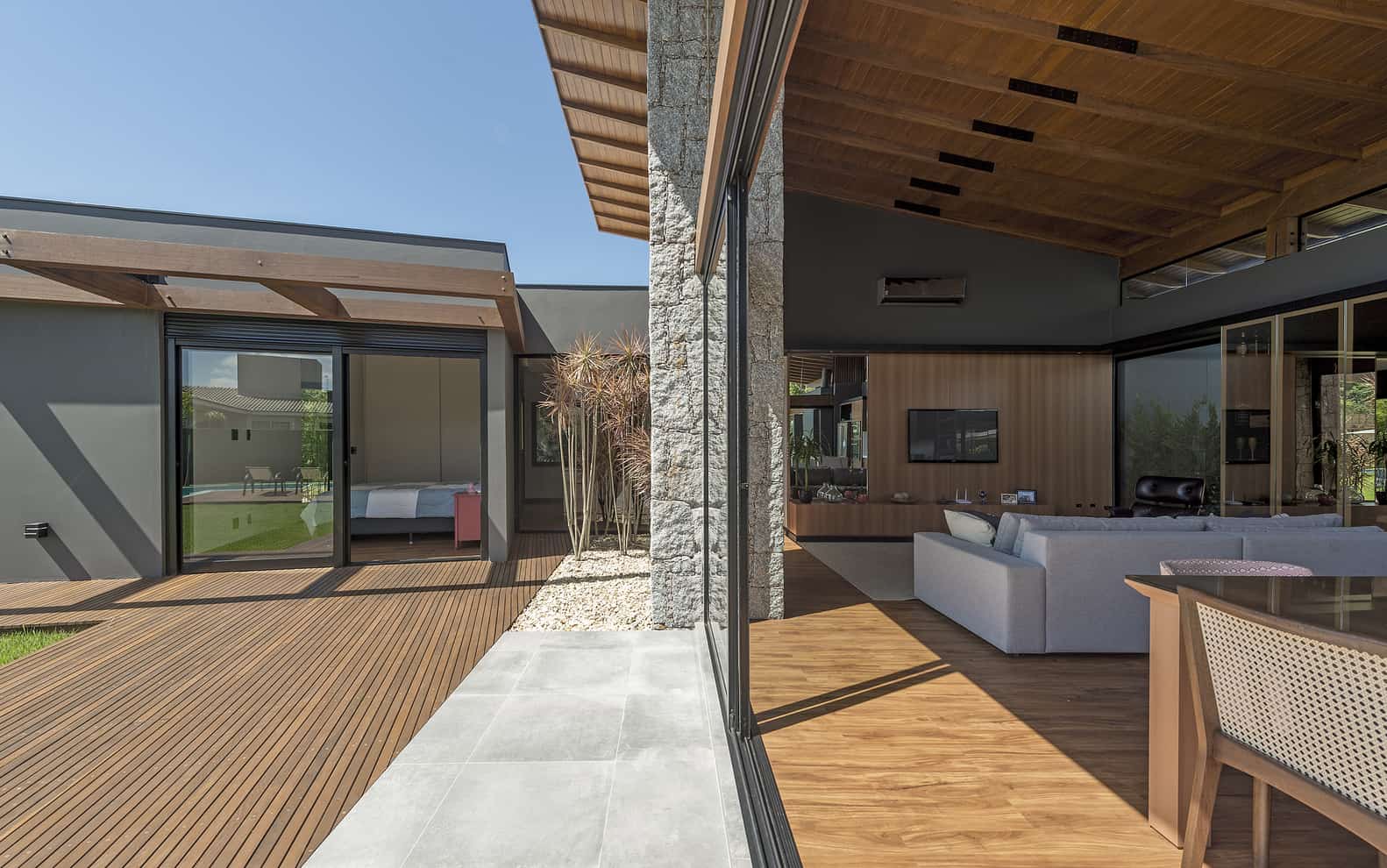 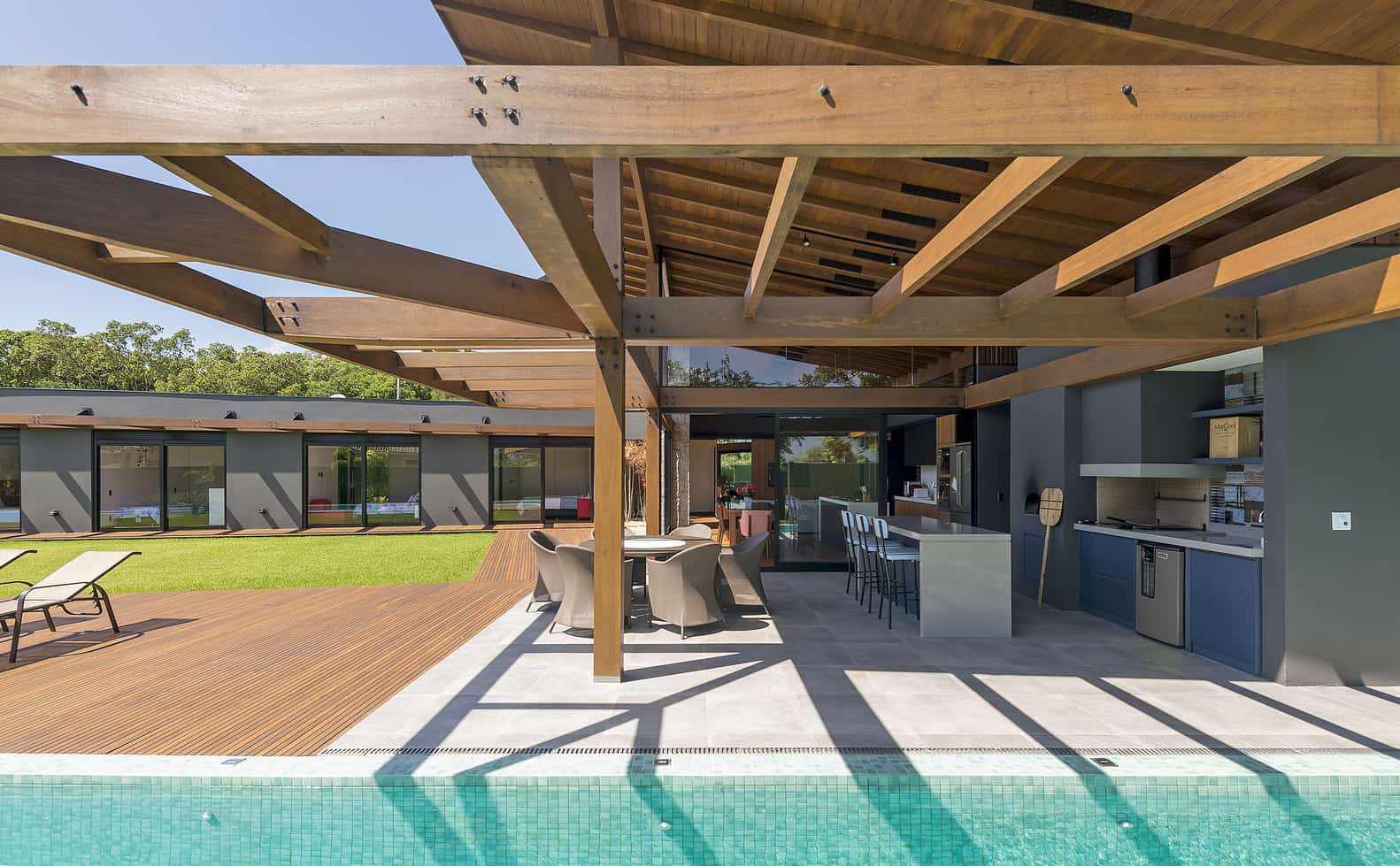 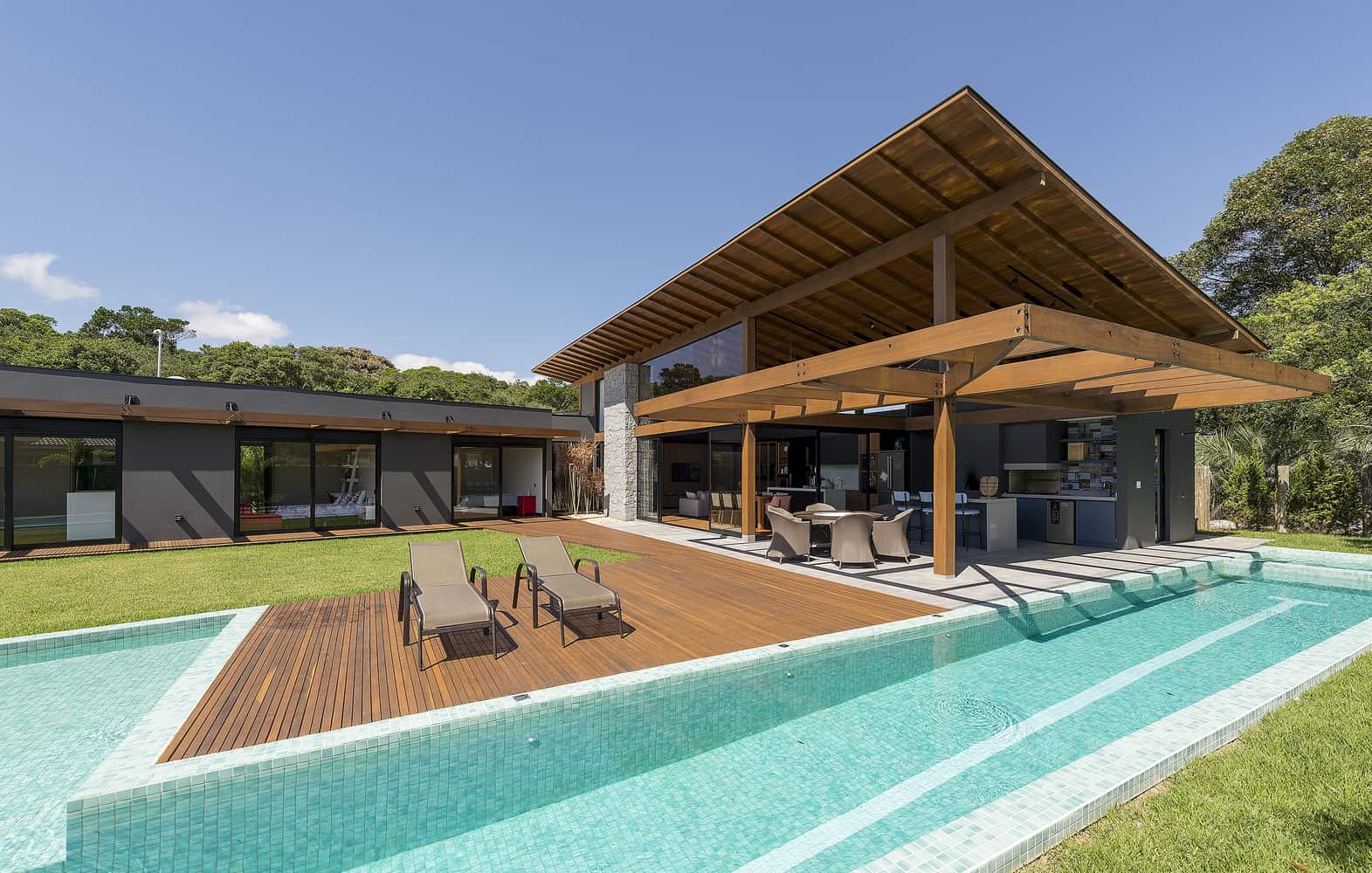 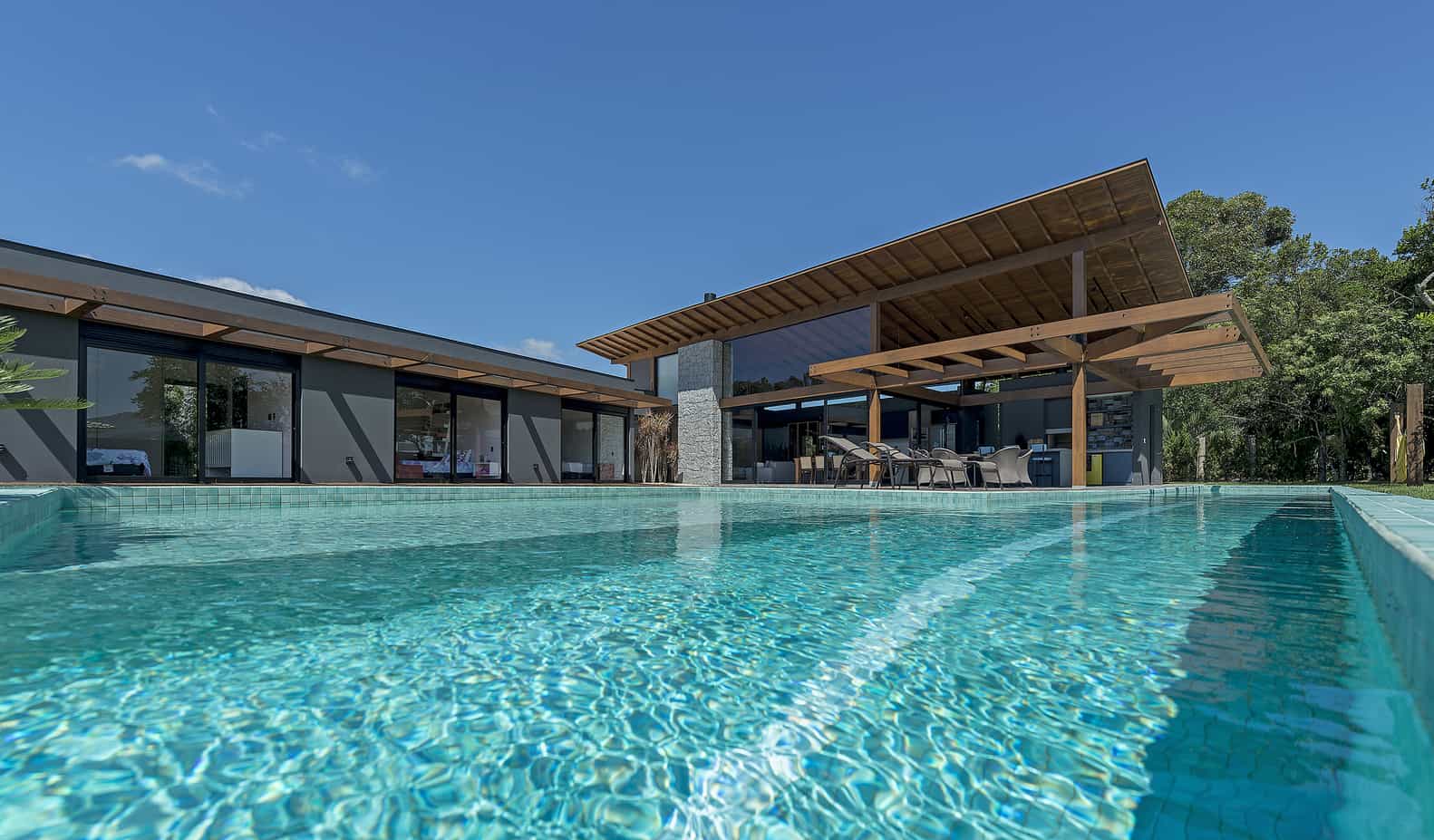 In an expansive corner lot by a stunning lagoon, the JP Residence by Sarau Arquitetura provides a small family with a stunning Brazilian escape that takes the climate into account and feels almost like a relaxing private resort.

Located in Araçatuba, Brazil, the lot that the house is built on occupies almost 1200 square metres and stands only a single storey tall. The house has an intriguing trapezoidal shape and was specifically designed to take the climate into account, blending indoor and outdoor space and interior and exterior sensations like light and fresh air as seamlessly as possible.

Part of the way that designers chose to blend with outdoor spaces was to include lots of greenery in the design, both inside and outside. Along one side of the yard, for example, a garden extends the complete length of the 25 metre long swimming pool, which shines blue from the lush green lawns like an oasis.

The house was also organized according to the function of their spaces, with designers paying just as much attention to how the interior of the house is laid out as they did to how the indoor and outdoor spaces are organized. The intimate areas of the house are quite distinguished from the social areas, creating two sorts of sectors.

Part of what distinguishes the two areas from each other is the marked difference in ceiling height. In the private spaces, the ceilings are low and intimate, creating a cozy, friendly space that feels close in a pleasant way. This is balanced by the fact that one section of the ceiling is actually completely open to the sky!

In the public spaces, on the other hand, the ceilings sit rather high, creating an open effect filled with woodworked detail. The effect between this and the way the patio doors slide entirely open to blend the living and dining rooms completely with the green space outside. In fact, all of the public spaces are situated in the house such that they’re turned towards that stretching green space and sparkling blue pool.

In a transitionary space between the public and private space sits a bit of a service area. This is where you’ll find a guest bathroom, a relaxing sauna  with a door nearby leading in from the swimming pool and hot tub, and technical areas like storage and other things one might need to take care of a house as an owner. This is also where access to a little ground floor balcony area is gained.

One of the most noticeable pieces in the living room is undoubtedly the fireplace. This is a vertically impressive structure that features stunning stonework reaching all the way up to the high ceiling of the social area. All around the fireplace, natural light floods into the living room, kitchen, and social area from sprawling floor to ceiling windows.

Leading to the master bedroom, the hallway features a set of large windows all the way down that sit right up against parts of the garden outside the window. Large green leaves sit right up against the glass, creating the illusion of a spa or calming jungle area. This plays off the natural ventilation and the skylights to make dwellers feel as thought they’re walking down an open air space instead of an indoor hallway.

In combination with the open air sense of space and the natural materiality of the interiors, which is heavy in wood and stone, the overall atmosphere in the house has a sense of synergy and calm that even visitors can sense immediately.

Three-story Loft in Romania by In Situ Architects