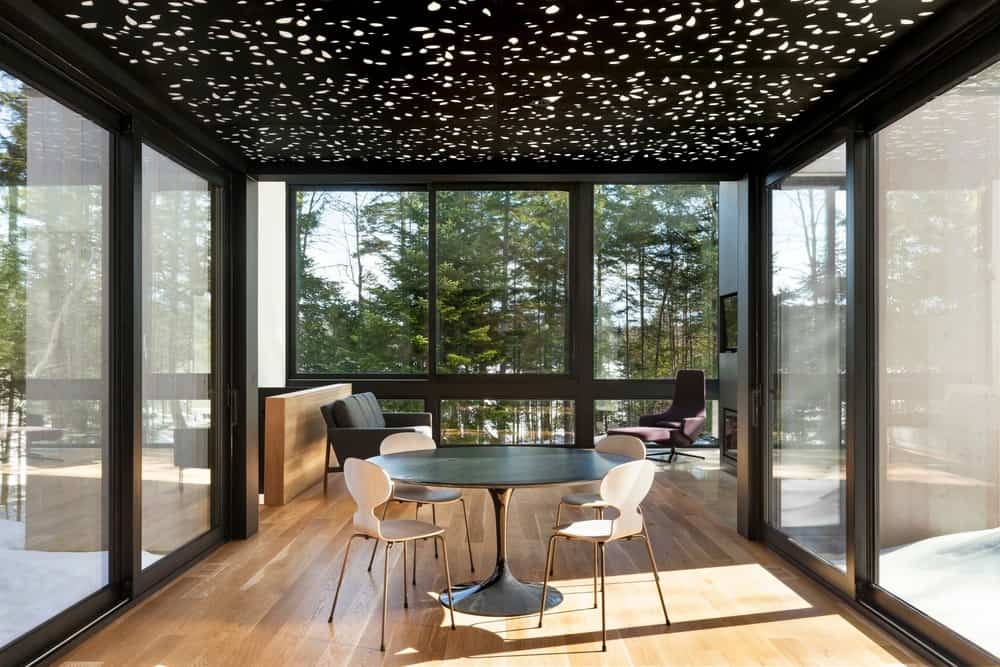 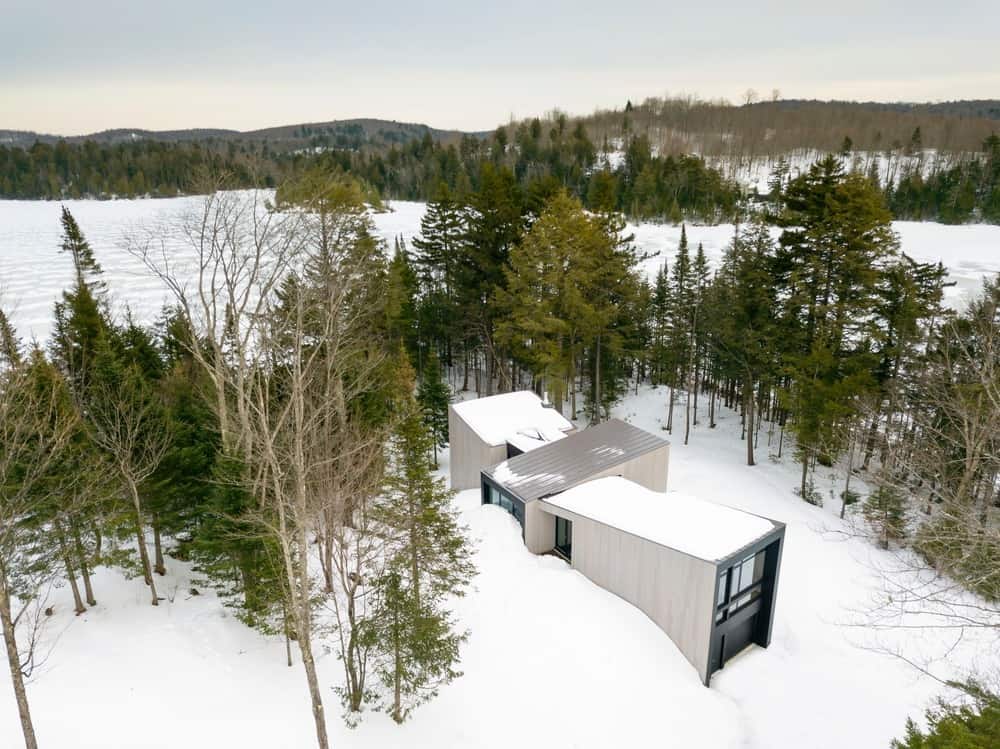 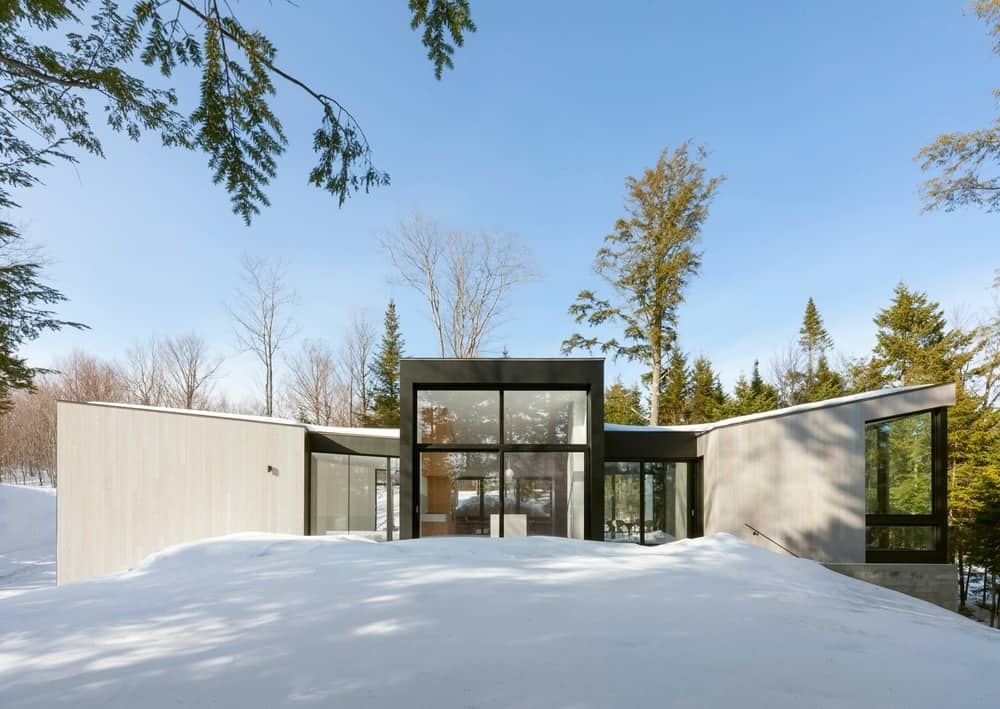 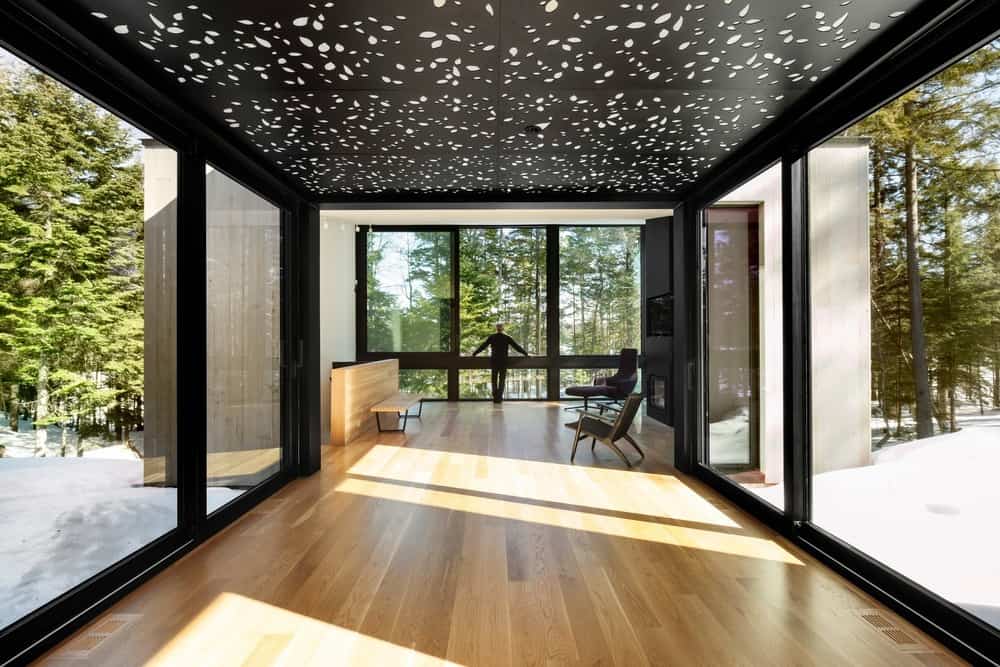 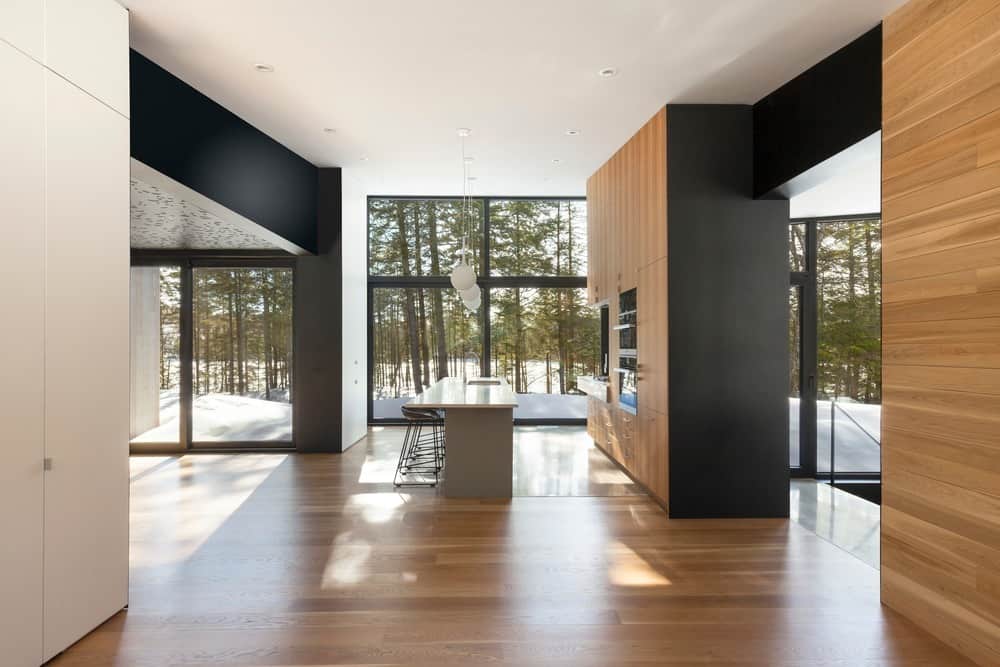 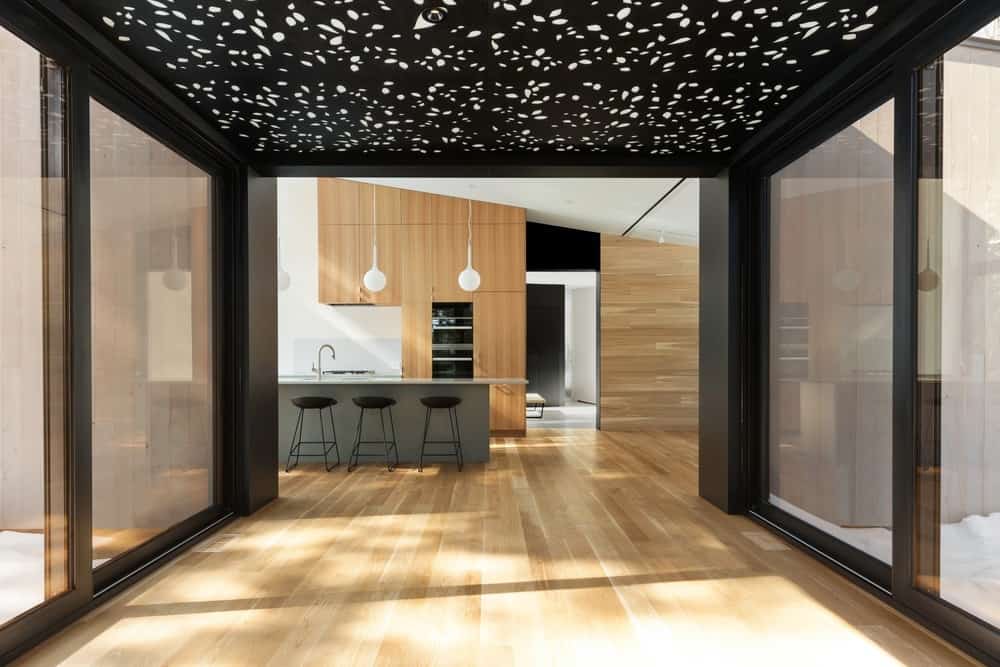 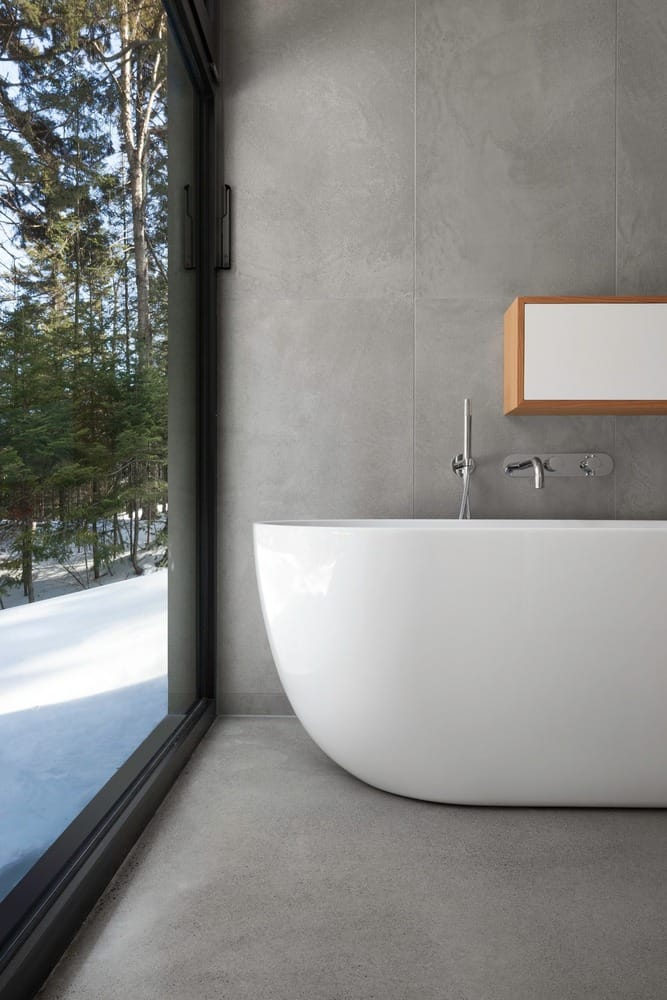 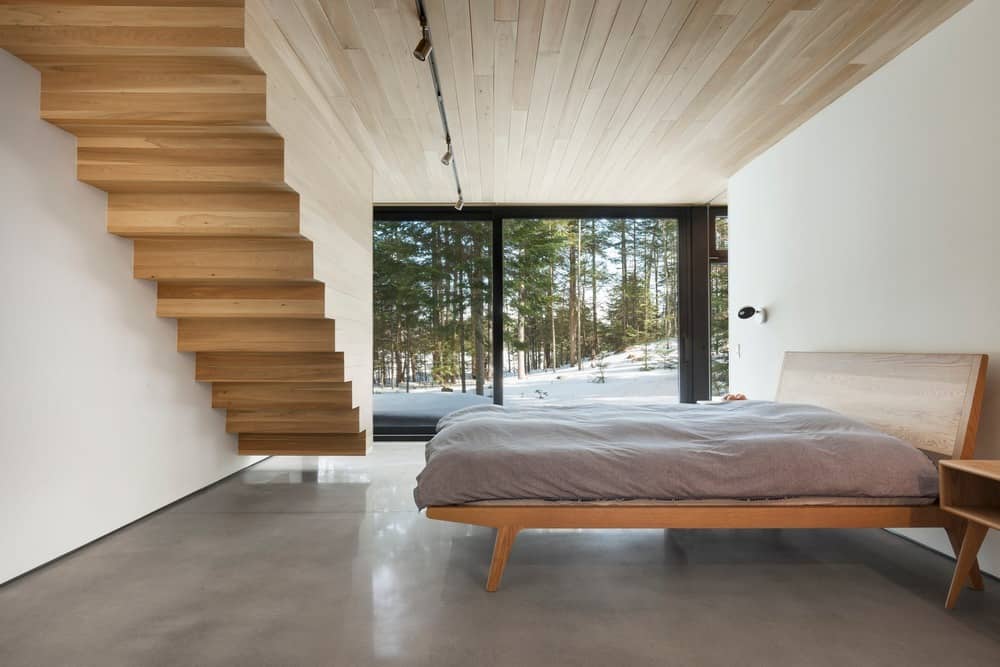 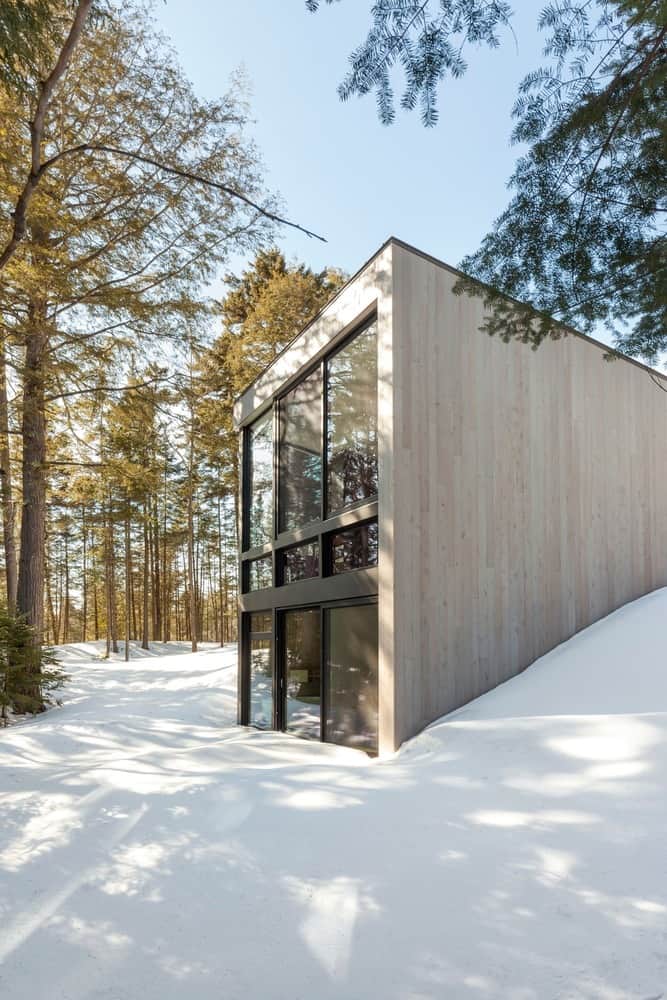 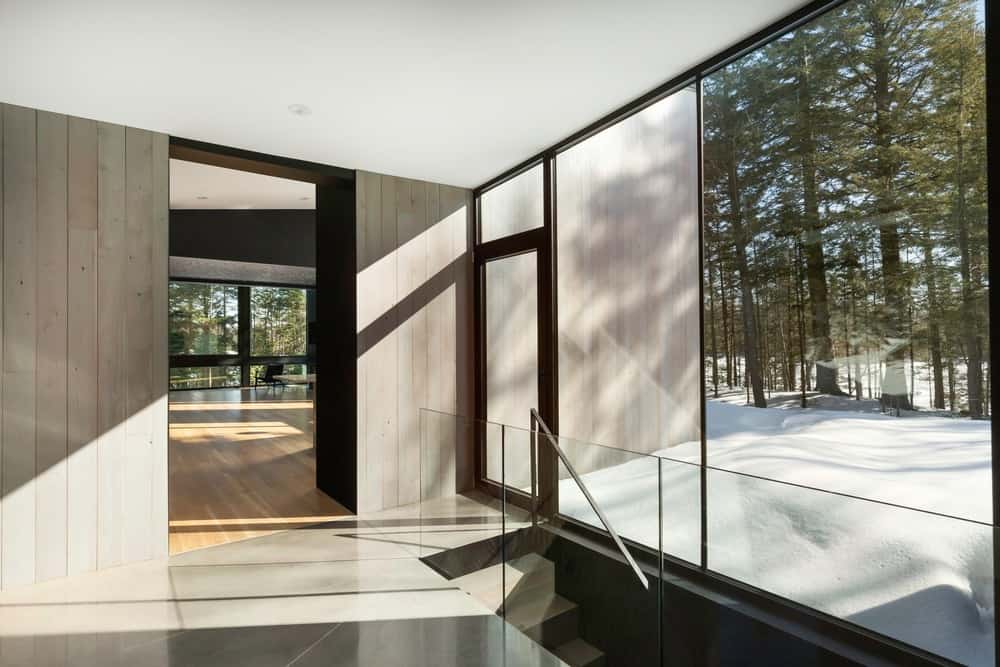 In the lovely, lake rich area of Wentworth-Nord, in the French countryside of Canada, the stunning TRIPTYCH residence was built by YH2 Architecture to maximize the owner’s experience of the Laurentian Mountains.

These Montreal based designers chose a three-pavilion structure in order to simplify the process of quite literally nestling the residence into its lush, wonderfully natural lakeside surroundings. Built on a small slope that overlooks a darling lake, the house features crisp lines and neutral, conservative colour palettes in order to prevent it from interrupting its own plot’s peaceful landscape.

As we’re sure you can guess, the designers actually held the building’s namesake in mind as they designed their new structure. Like any classic triptych, this residence features a primary central structure. In this case, the central pavilion is afforded starlingly direct views of Lac St-Cyr. On either side, two additional pavilions were created in smaller sizes in order to make them feel more intimate and in contact or connection with the nearby trees. In this way, the buildings simultaneously communicate a sense of fragmentation and a feeling of cohesiveness.

With each of the three pavilions, designers were very smart with shapes. They aimed to create as natural looking a tableau as possible within the trees by adjusting each building’s geometry to mirror, complement, or contrast the scenery around it. This is why the roofs slope upward in three directions from the very centre of the house, accentuating and framing the views around them rather than blocking or detracting from them.

In the central block of the house, you’ll first encounter a kitchen and adjoining office. Each of these features an opening wall facing the gorgeous lake. Beyond those, the living room can be accessed through a glass corridor that’s most often flooded with natural sunlight. The master bedroom sits directly below the living room on the natural slope, resting firmly where the terrain naturally evens out. This bedroom is accessed through a unique, decorative staircase that looks as though it’s floating thanks to the way the last step has been suspended.

To the west of the main building, the second pavilion is set higher on the slope and sits at more of an angle. This building serves as a sort of separate quarters for friends and guests when they visit, affording them some privacy and space of their own. It still sits in close proximity to the main building’s entryway, however, which saves it from feeling cut off. Even so, a delineation of space is created in this building thanks to the sift in flooring material from smooth, stained hardwood to polished concrete.

Below that on the slope, further down still, is a secondary entrance to the linked buildings, as well as an interior garage, which takes up the bulk of the space in the third pavilion. To save guests and dwellers from journeying outside to travel between buildings, the three pavilions are linked together by glassed-in passageways. The front door to the main structure is subtly located in one of these passageways, making any point in the house quite convenient to get to. These halls and their glass walls serve to blur the boundaries between interior and exterior spaces in a beautiful way.

Perhaps the most unique part of this home is that the living and dining rooms, which sit quite separately from the main pavilions, are most often completely open to the outside! Here, all light in the space is natural and electric lights haven’t even been featured. Instead, sunlight pours in through a suspended aluminum ceiling that has been cut in a pattern to create the sensation that you’re sitting under a leafy forest canopy.

In an impressive feat of builder’s skill, the TRIPTYCH house was constructed almost entirely of natural materials. The house’s facade, for example, is entirely sheathed with cedar planks from Eastern Canada that have been treated to appear naturally weathered over time (which they would eventually do anyways). Inside, various features are made of gypsum board, white cedar, white oak, or polished concrete.

TRIPTYCH features mostly natural materials. The façades are sheathed with Eastern cedar planks, treated to appear weathered by time. Interior walls and ceilings are either gypsum board or white cedar while the floors are white oak or polished concrete. Wide patio doors, with black aluminum casings, frame the ever-changing views. A patio area extends from the kitchen and dining spaces towards the lake. The building’s geometry creates a theatrical stage for the surrounding nature.

A Chic Apartment on Prince Street