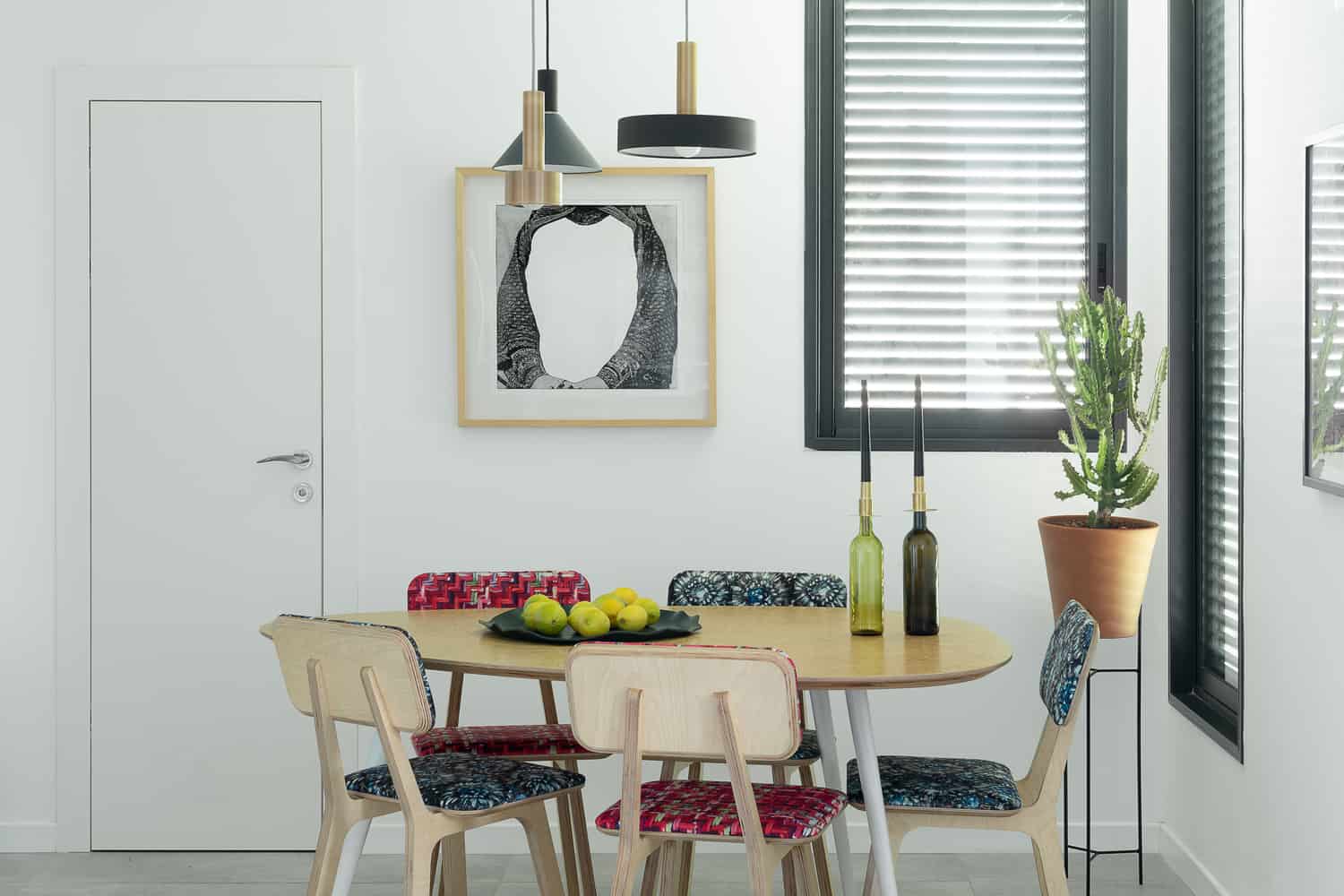 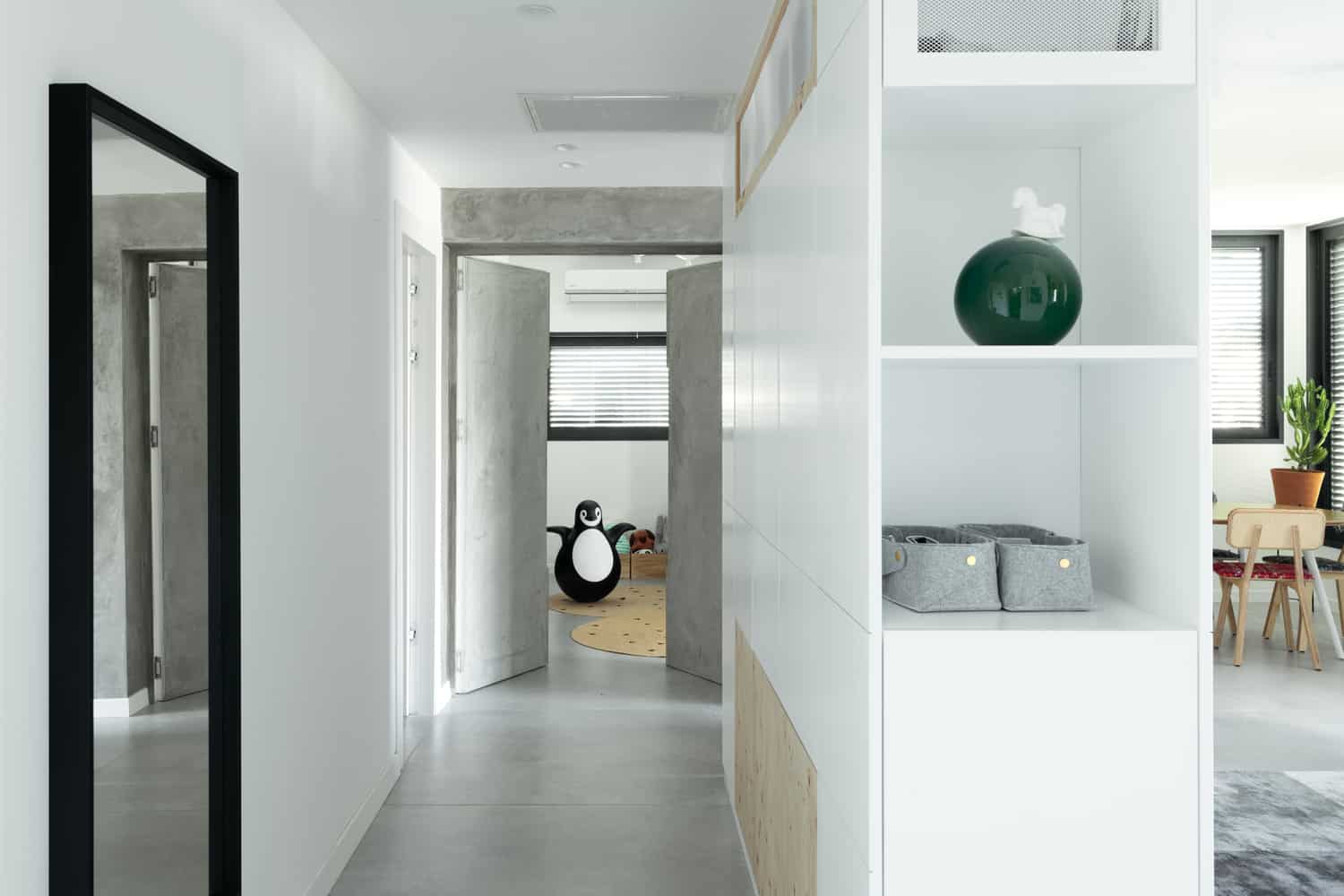 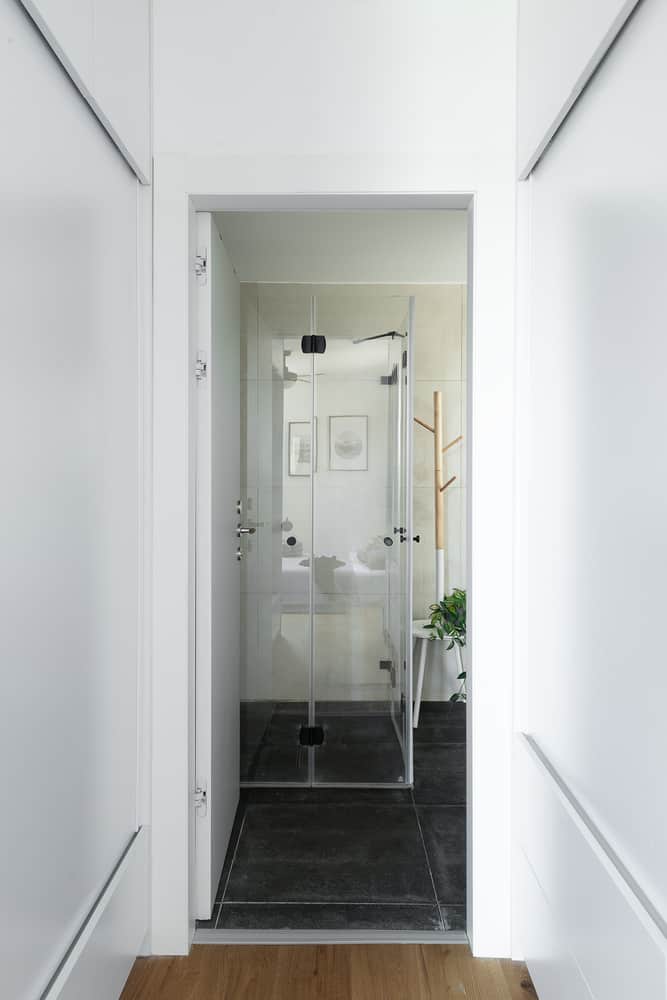 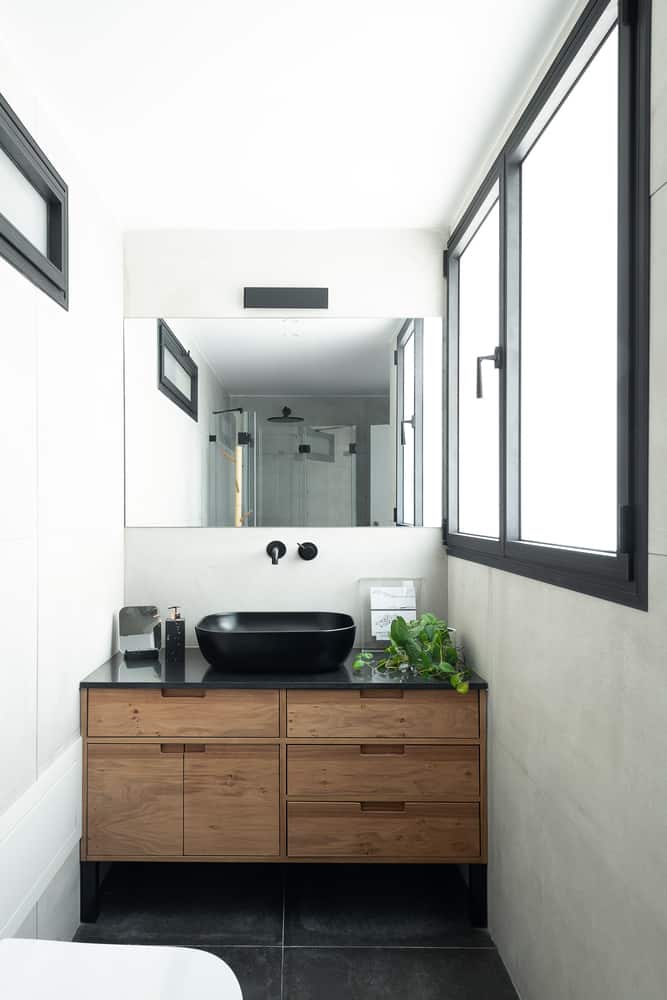 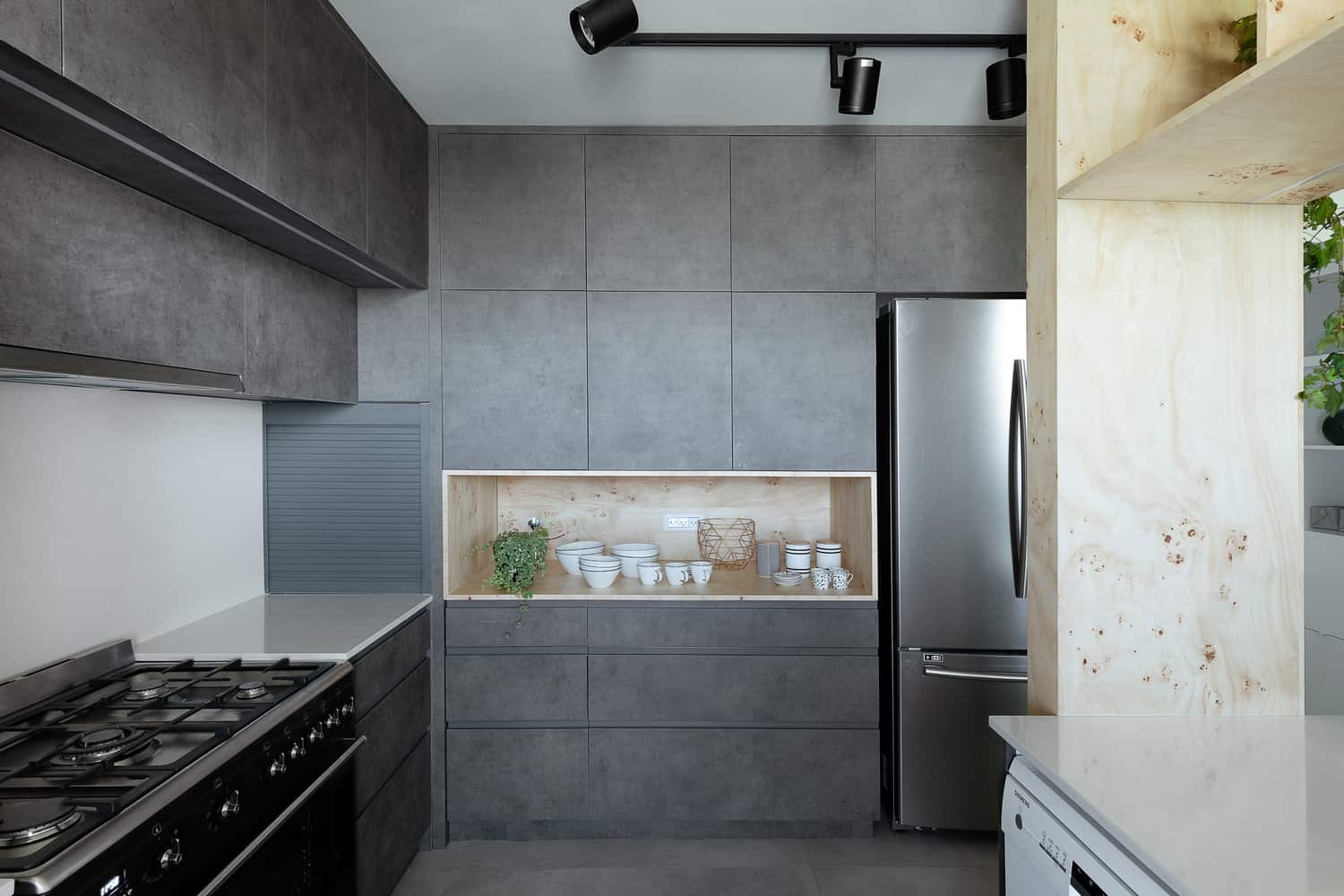 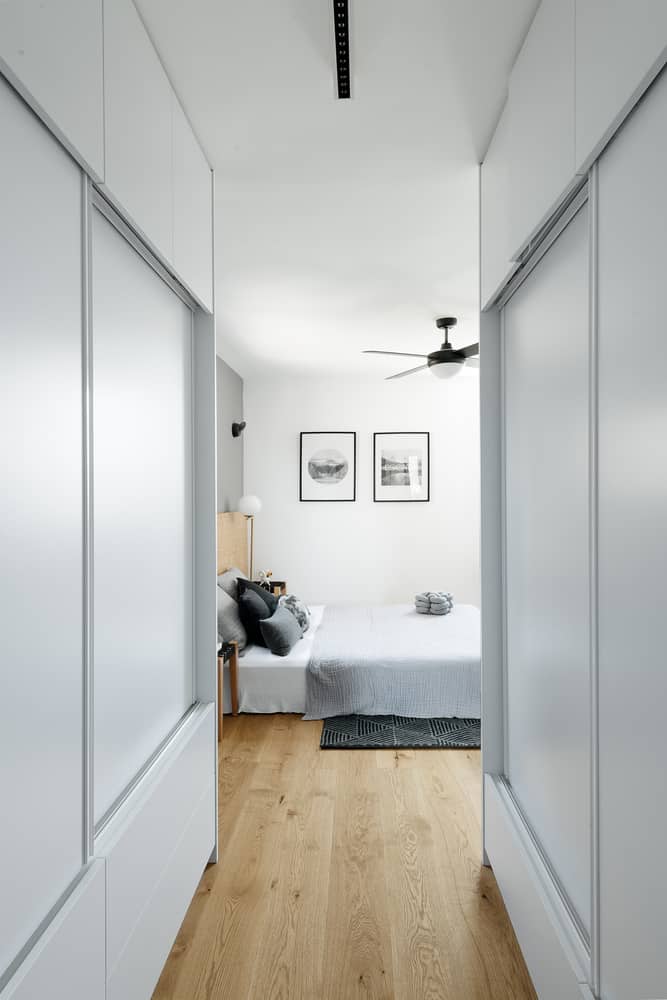 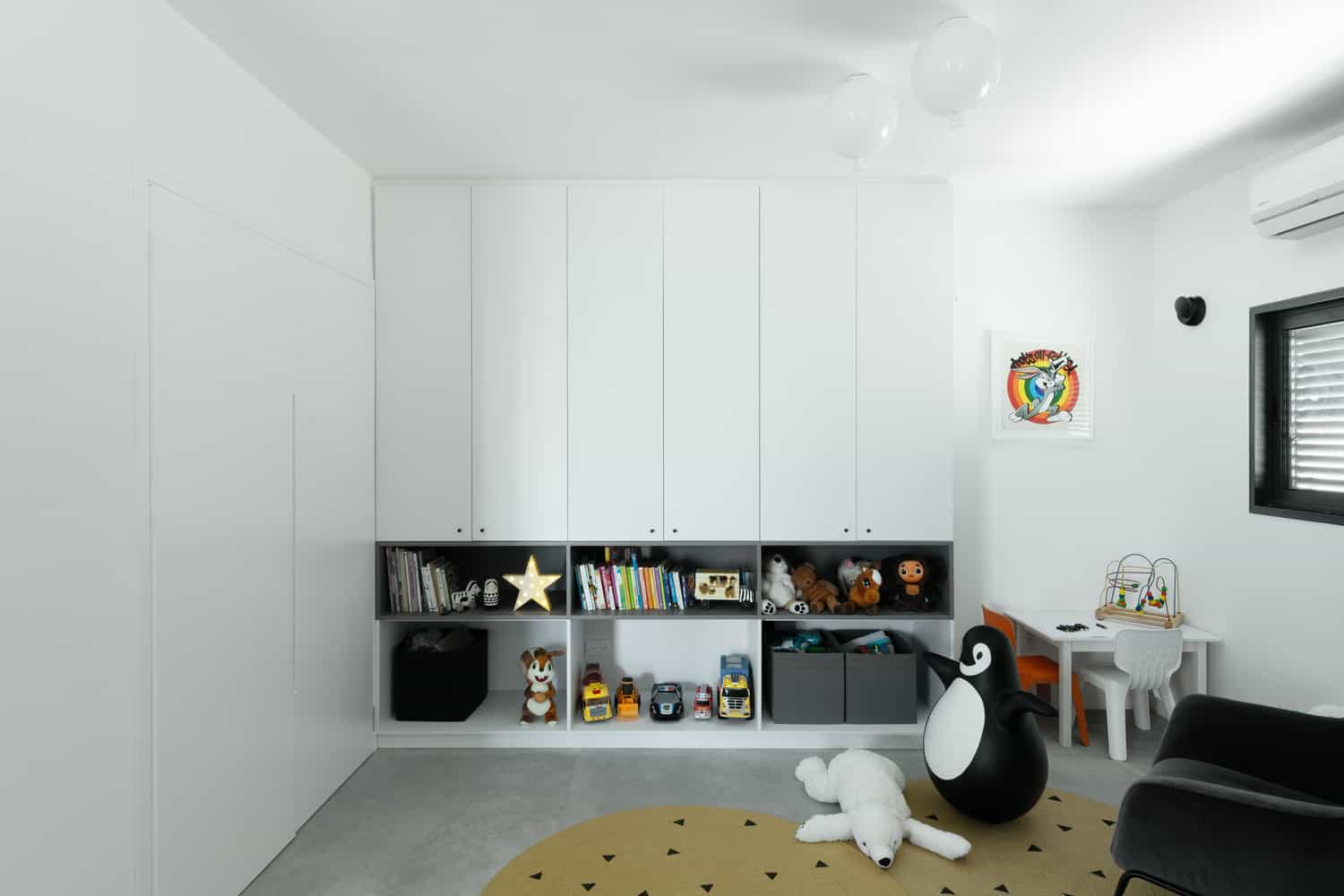 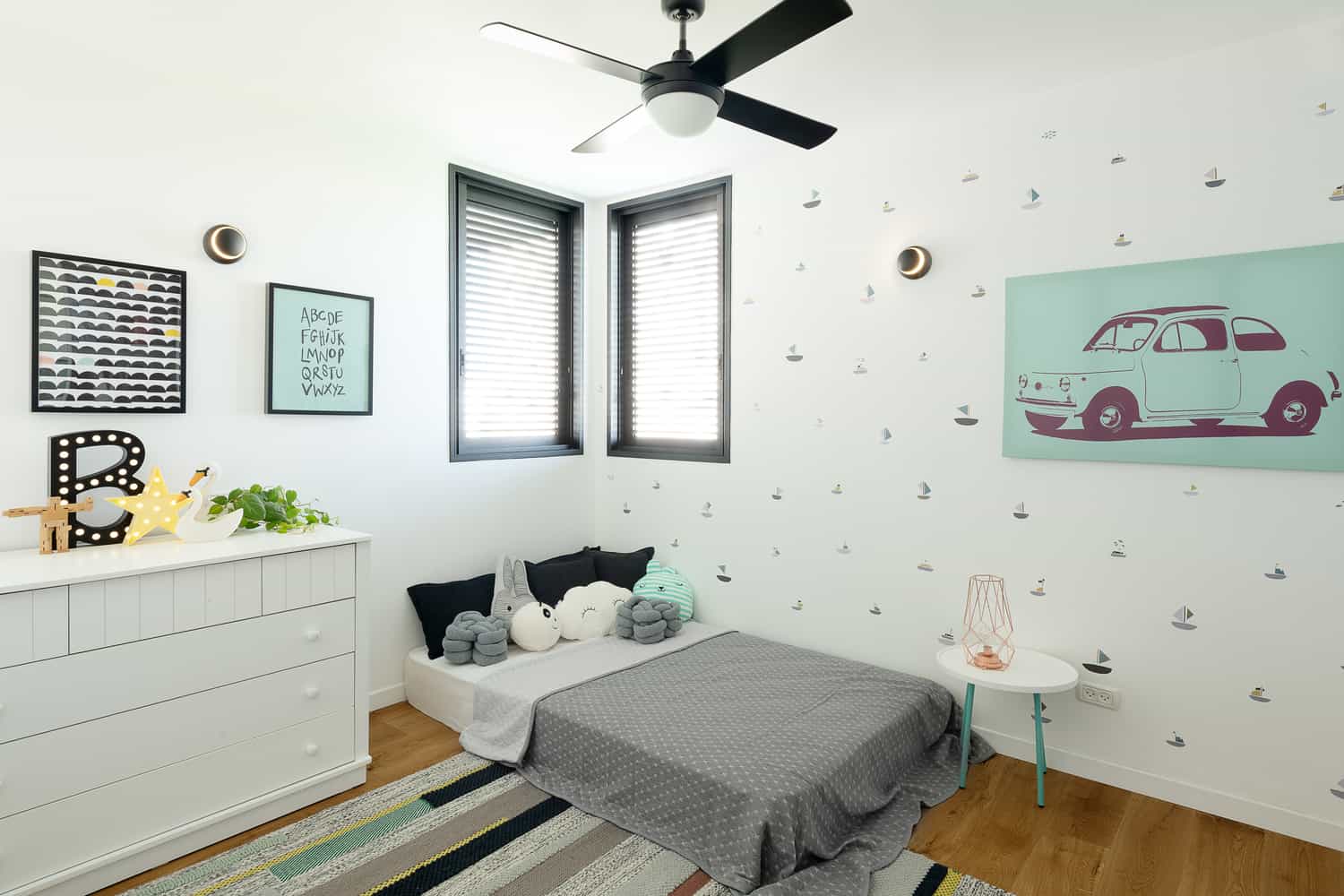 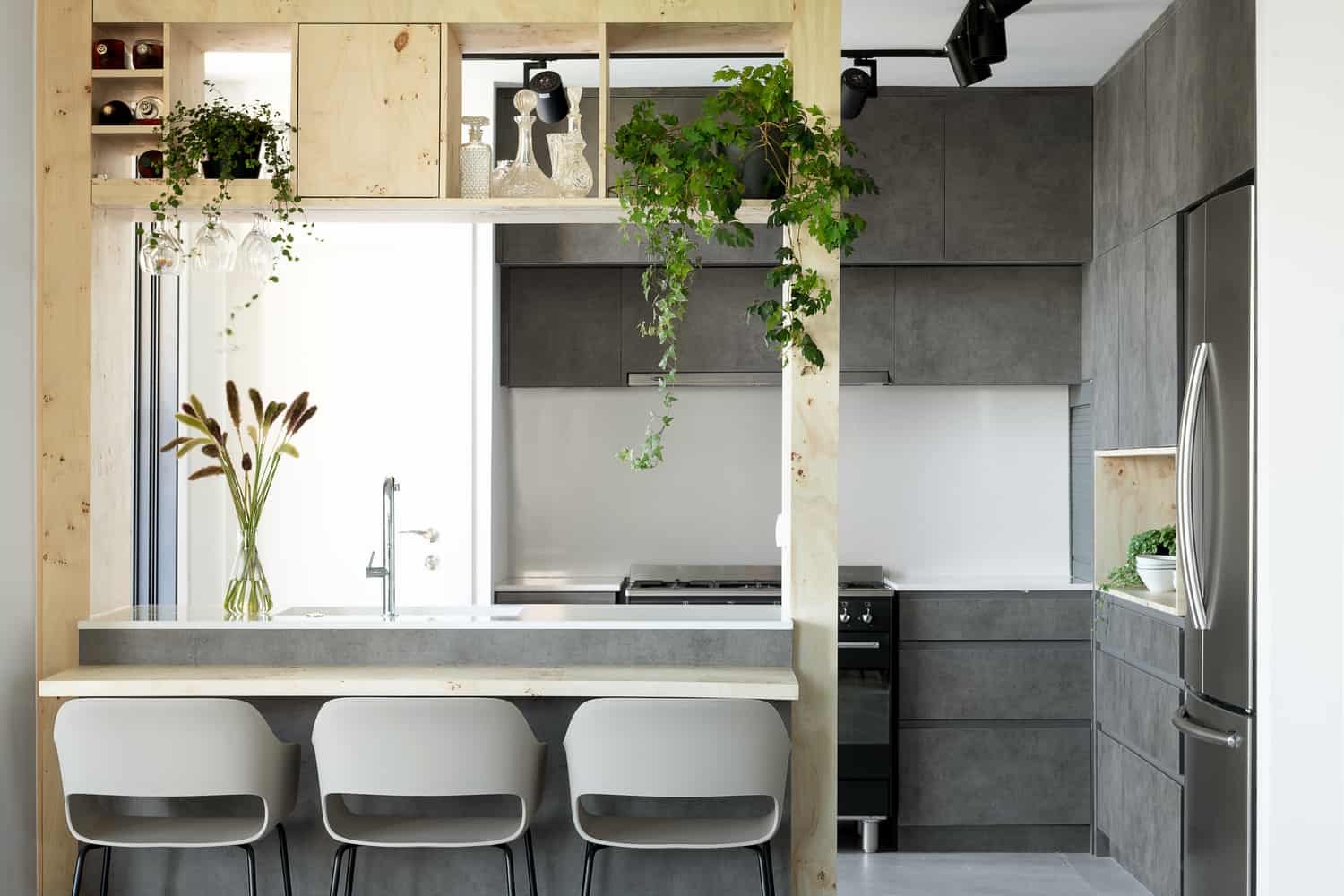 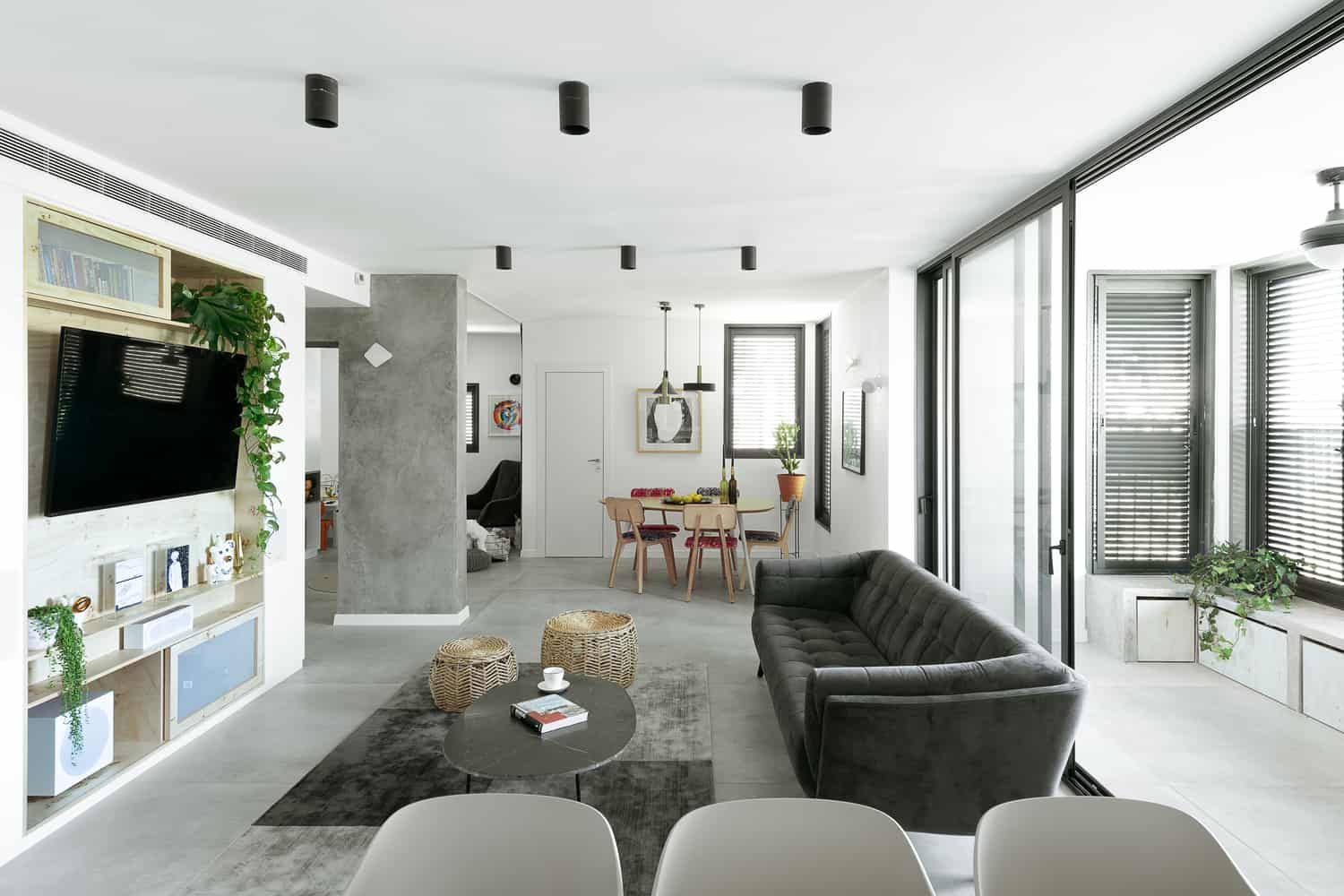 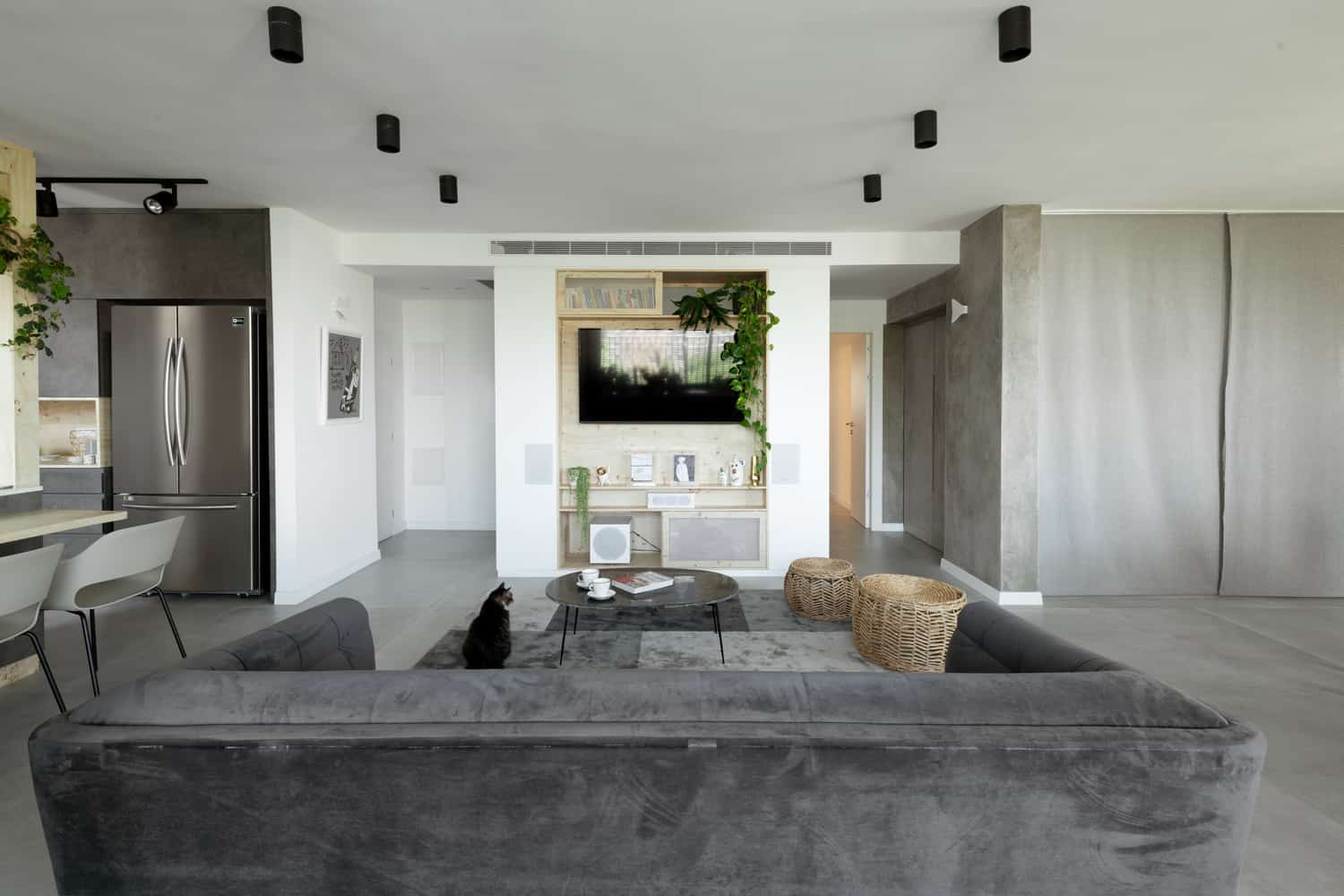 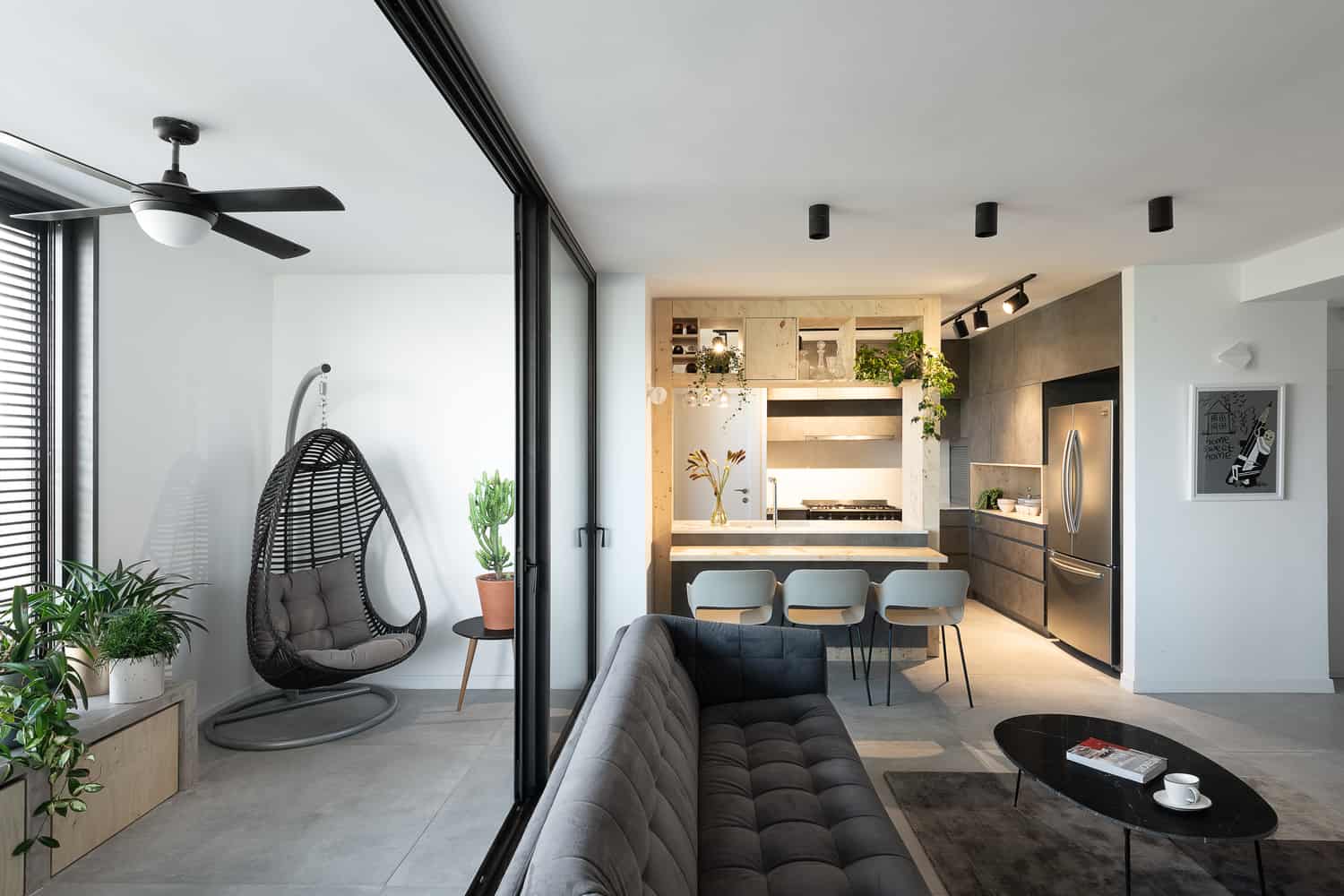 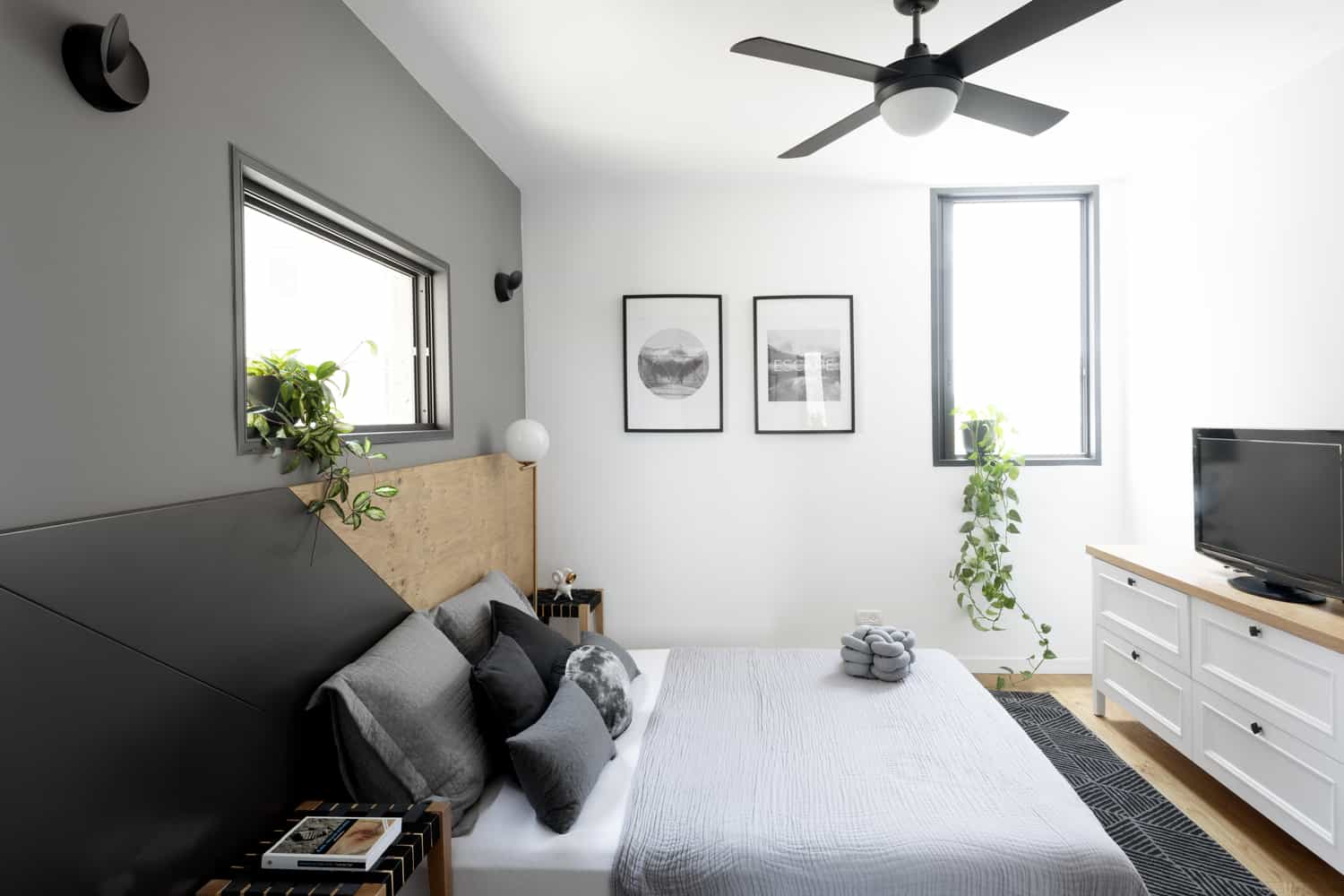 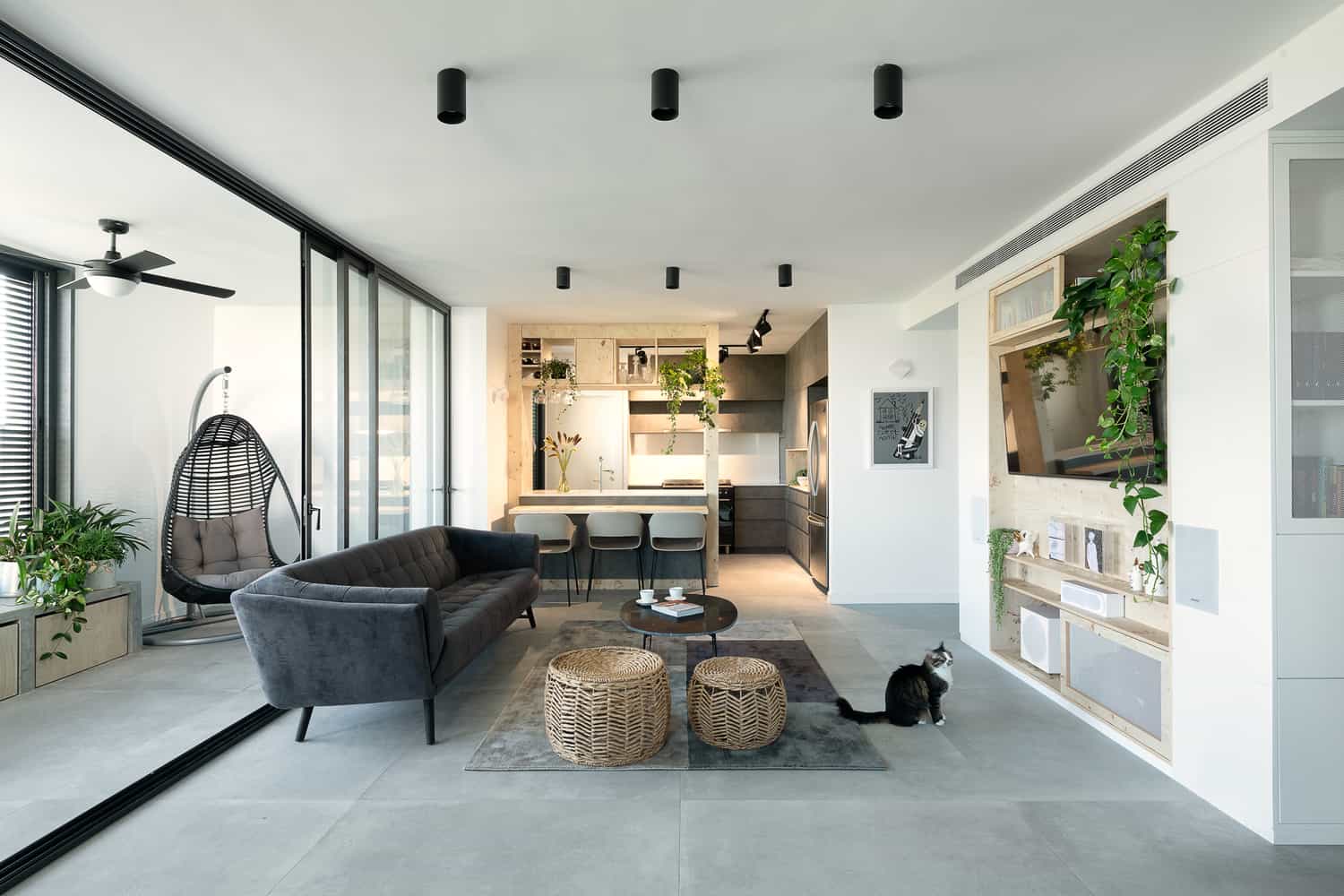 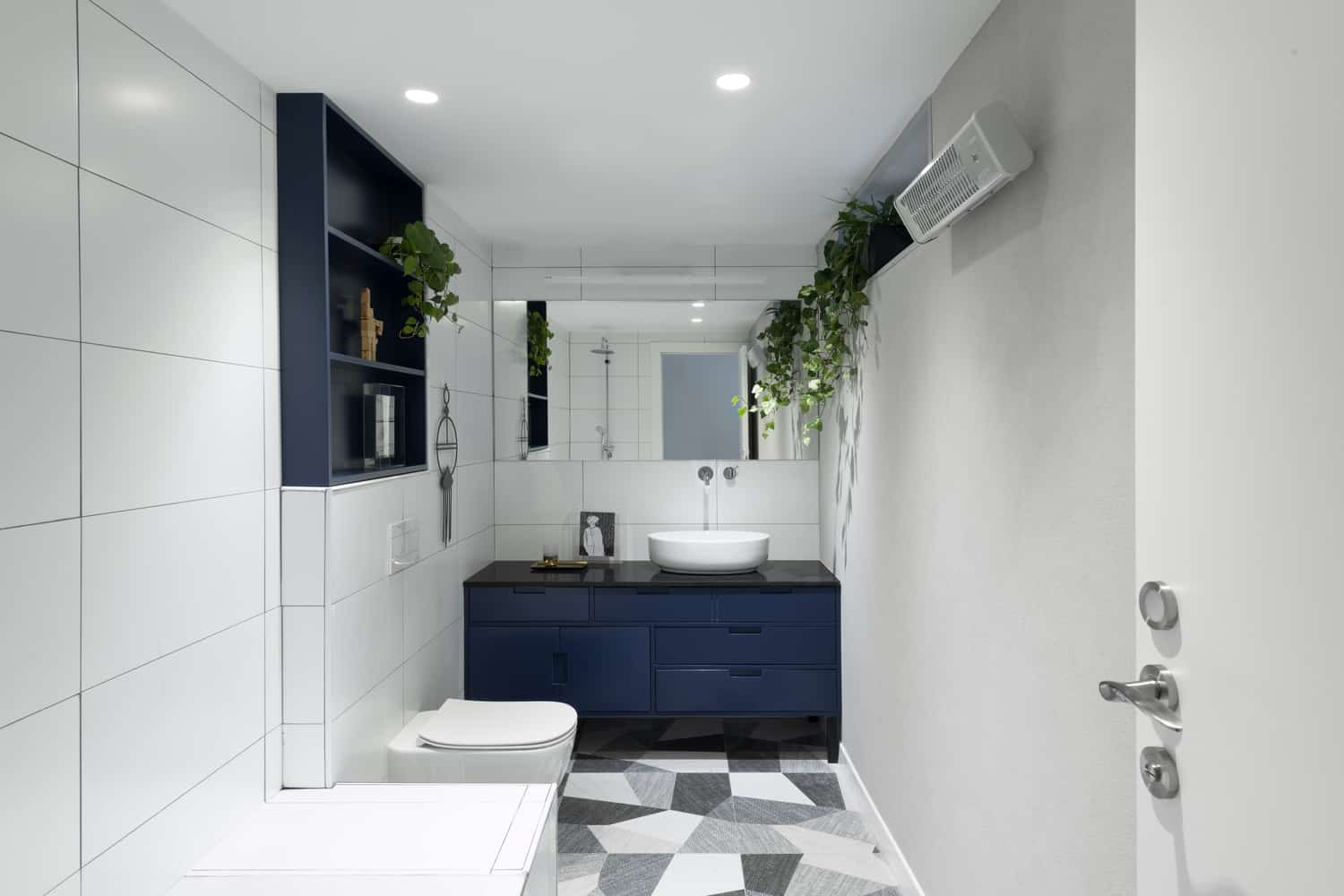 In the north end of the city of Tel Aviv, Israel, designer at Studio Perri Interior Design recently completed a renovation on an apartment from the 1970s. Now, the newly updated Modern Urban Apartment is home to a young couple who needed something a little quieter than their previous apartment right in the centre of the city.

The renovated apartment, which occupies 135 square metres, boasts a living room, kitchen, dining room, and balcony in the public paces, as well as four bedrooms, two bathrooms, a storage space, and even an entire room for the family cats in the private wing. Originally divided into two units- a larger apartment and a delineated smaller wing- in the 70s, the space has been joined for better flow and use of space.

Previously to this brand new project, the apartment had never been renovated before after it was built in the 70s. The new owners, though in love with the building’s history and location, desired something a little more spacious with better light flow. In terms of atmosphere and aesthetic, clients and designers like chose a modern but minimalist scheme that effectively blends both beauty and functionality.

Inside, the renovation destroyed and rebuilt almost every single wall, keeping only the original support pillars and two wall’s in the couple’s young song’s room. In the space that use to be a separate, smaller unit, designers left walls out to blend it into the main apartment and built the kitchen and storage unit here, maximizing on that space for useful and essential home functions.

Now, the kitchen is blended right into a bright open living space that sits on the edge of what was originally the main apartment volume while things were still split. Further towards the back of the home, a kids’ play room now sits where the old kitchen used to be. This space is very open as well, with all of the original walls removed and only visual delineations set in place to denote its borders.

Along the same vein of creating new space in efficient ways, designers actually used existing features of the building’s facade to make their client a new balcony space that wasn’t there before. By taking advantage of a strategically place bulge in the building’s exterior facade and building a small extended, open air space outward from the apartment’s outermost wall onto where it juts the furthest.

Large renovations took place towards the master bedroom as well. Leading up to the beautiful escape, the original corridor, which was quite narrow in nature, was enlarged and made wider so that more light can easily flow throughout the private spaces. The bedroom itself was also redesigned. Now it features two massive built-in wardrobes that sit parallel to each other and adjacent to the master bathroom, which received an updating treatment from its original state as well.

Moving back out towards the main living space, visitors encounter the way that furniture, which was all custom designed for the room, does more than just provide seating and comfort. It also acts as a visual delineation between the main family room and the entryway and front door itself. Here, multi-function furniture provides custom storage for things like shoes and coats.

Throughout each space in the house, a careful palette of materials and colours is established and maintained with continuity. There is an emphasis on careful carpentry and colours that suit the wood finishes chosen. Maple wood shines throughout the spaces, accented and complemented by shades of grey, white, and black. To add depth, details in a deep blue, gold, and rich red are also featured like colour pops all throughout the home.

The brand new kitchen we’ve spoken of so fondly wasn’t moved solely for the sake of larger spaces. It was also positioned to more positively influence the flow of the house and how rooms are accessed. Now, rather than being cut off from the main living space, a person working in the kitchen has a clear site to the living room and play room. This allows for daily functions and family time to become a shared experience.

Elegance in the Meatpacking District