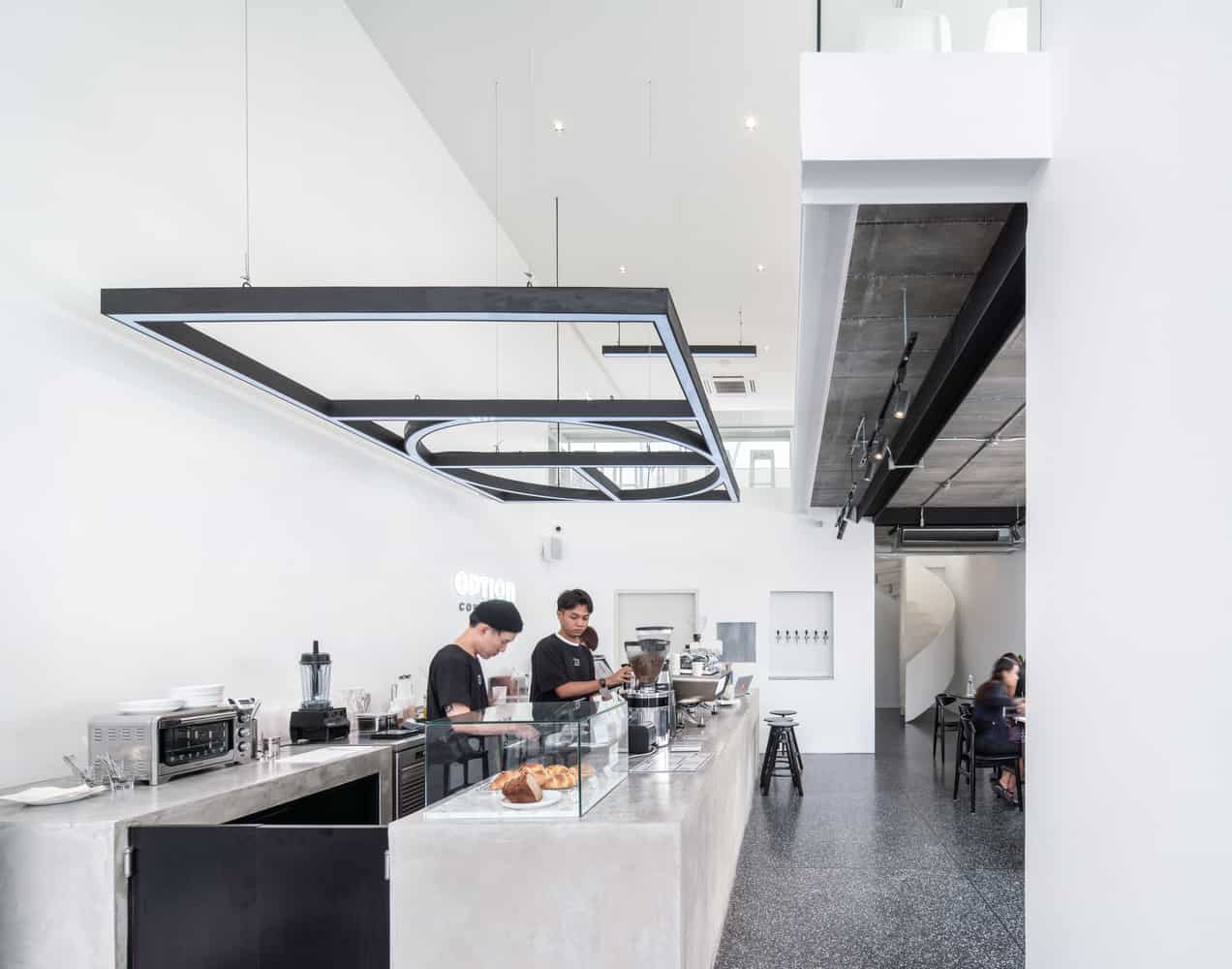 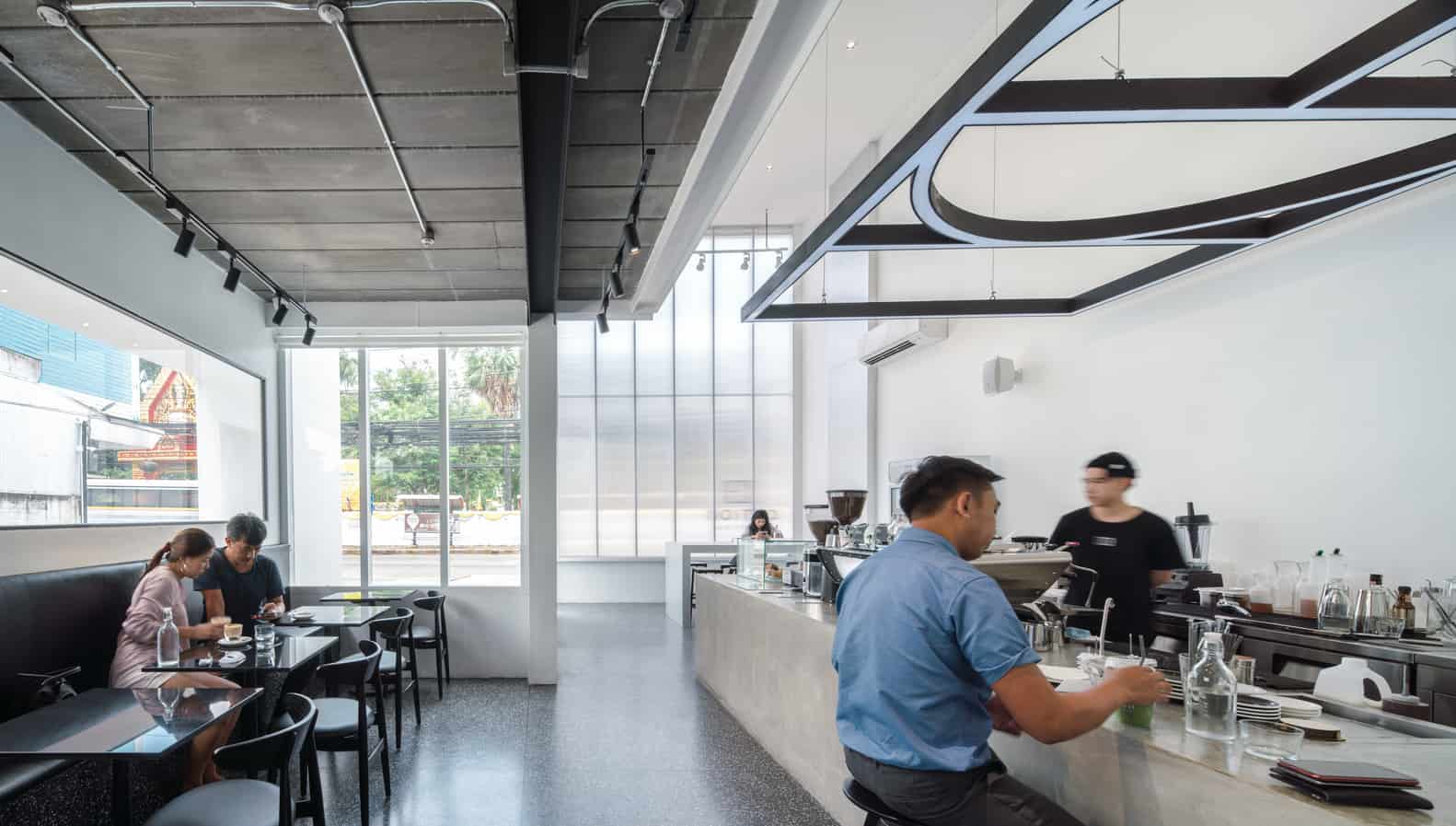 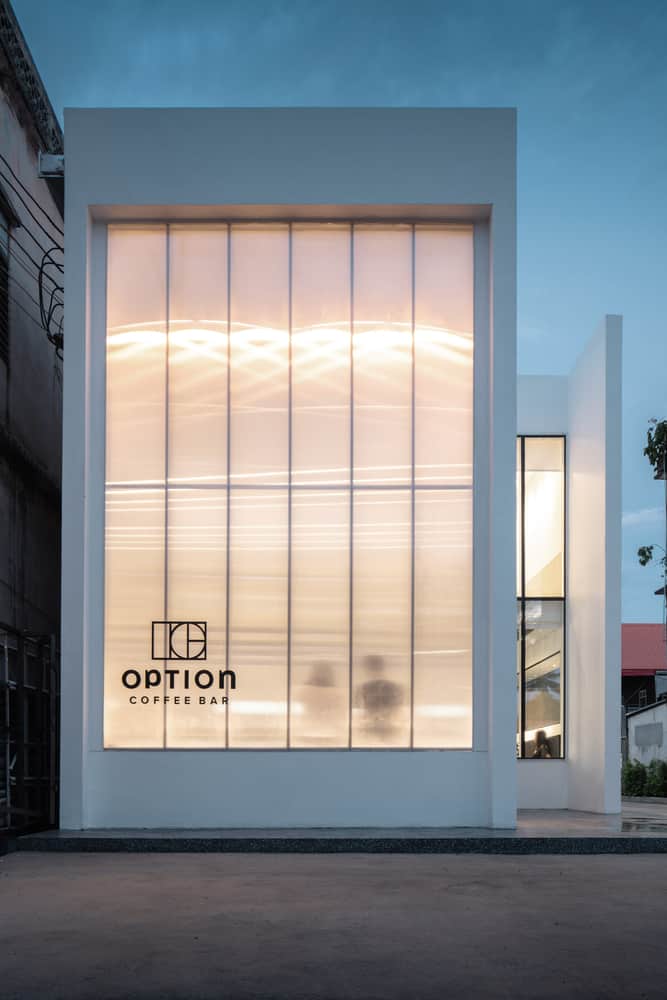 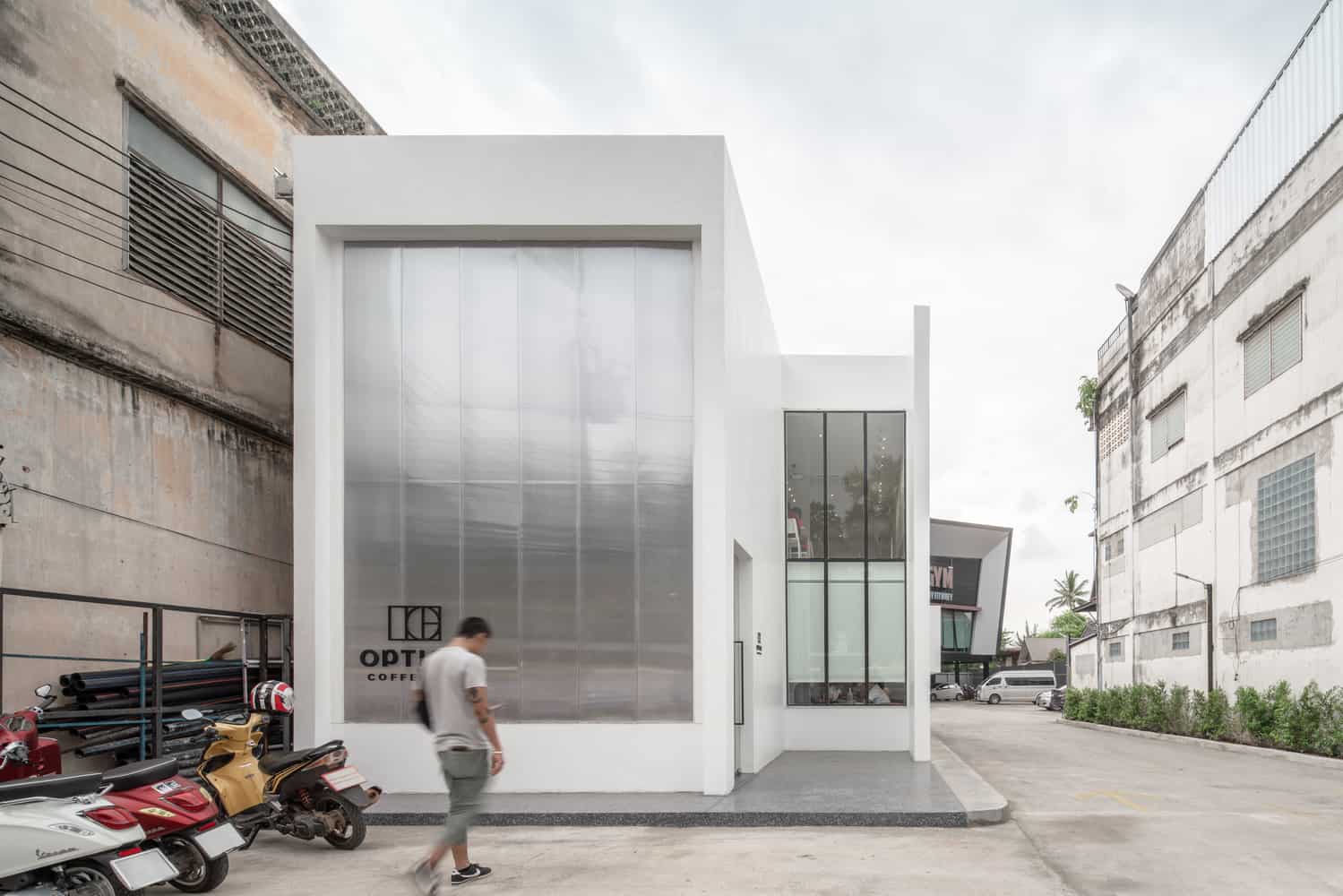 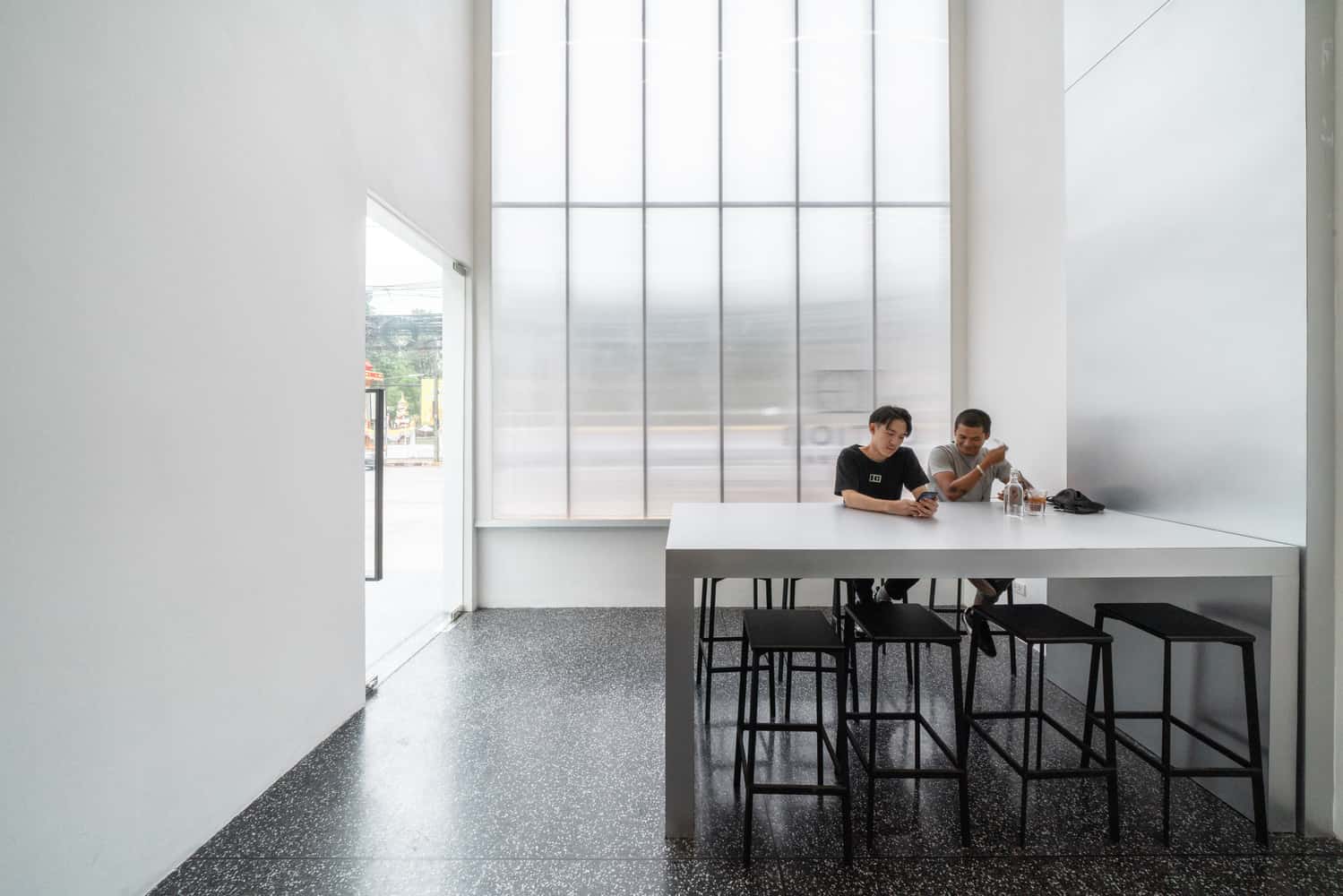 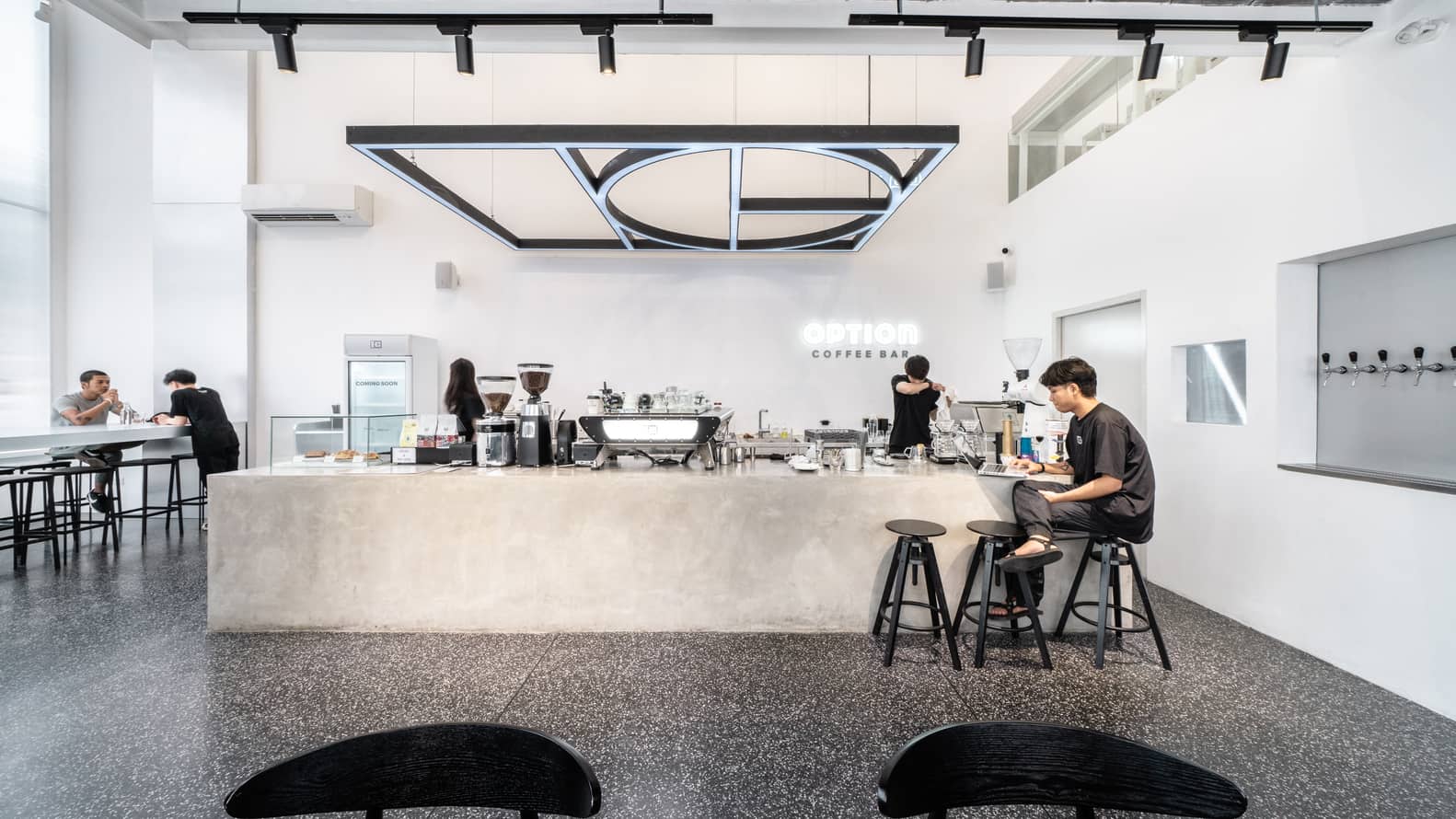 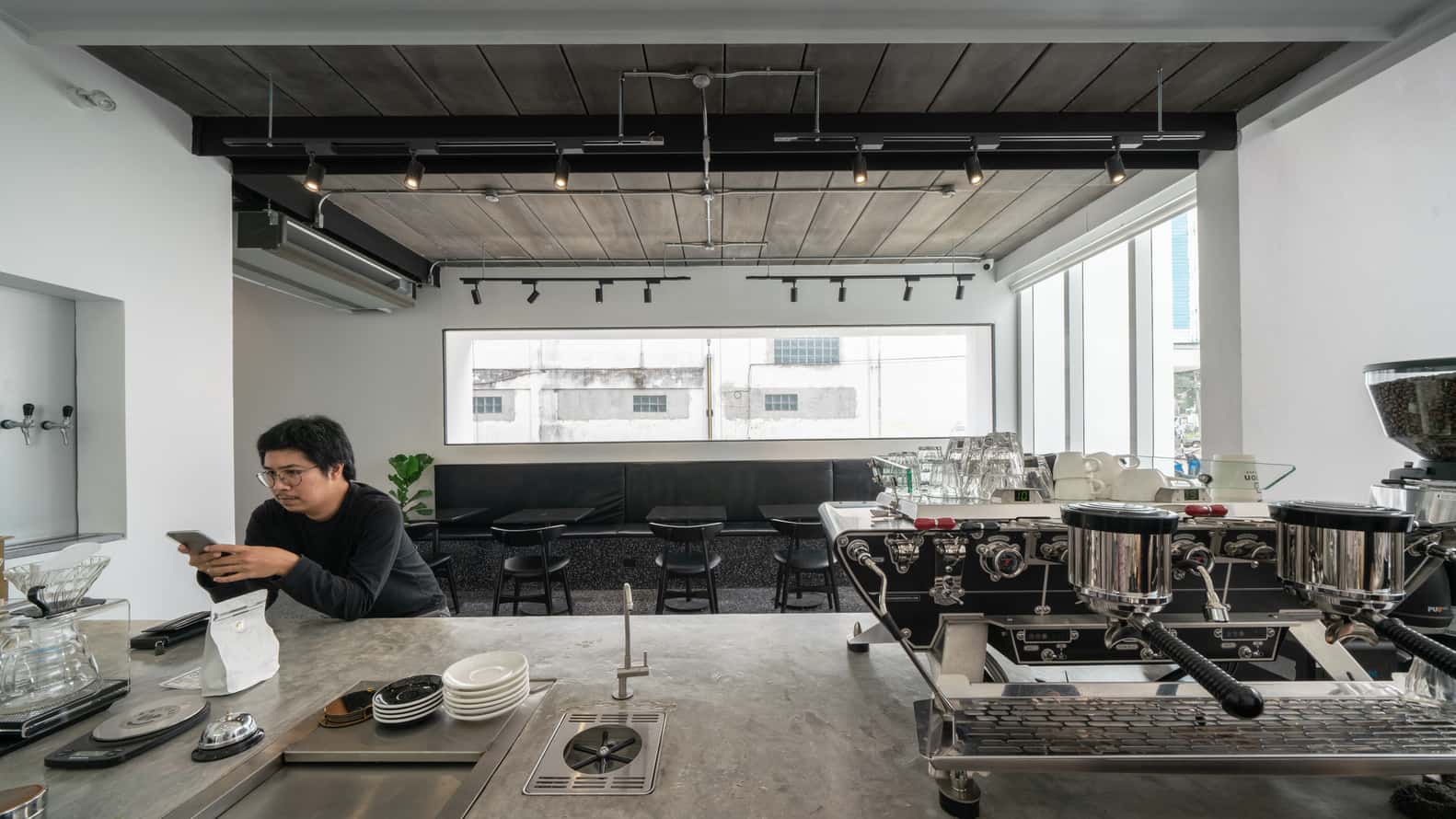 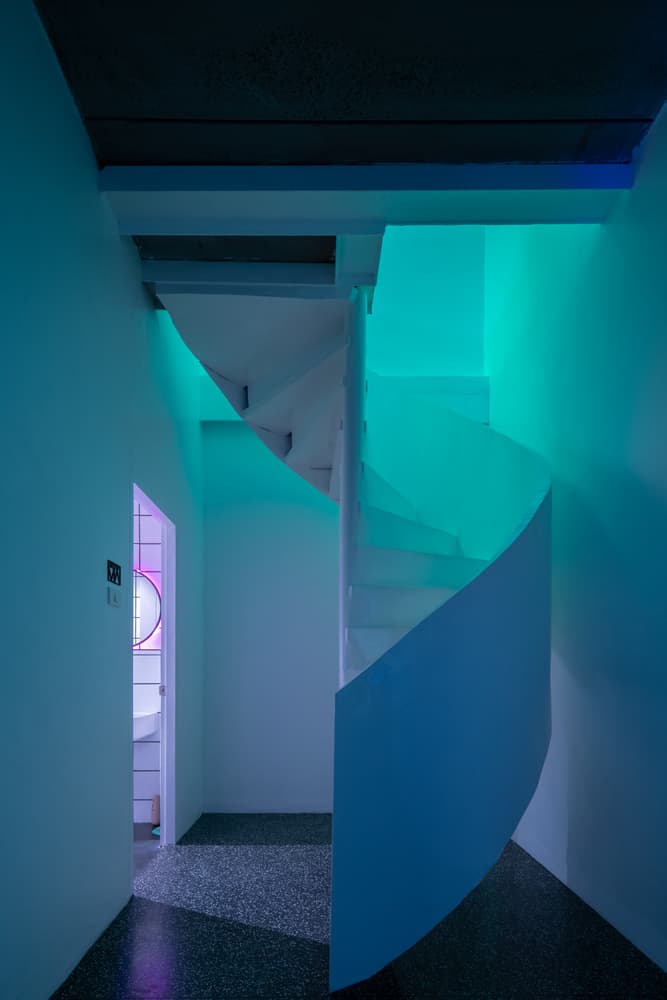 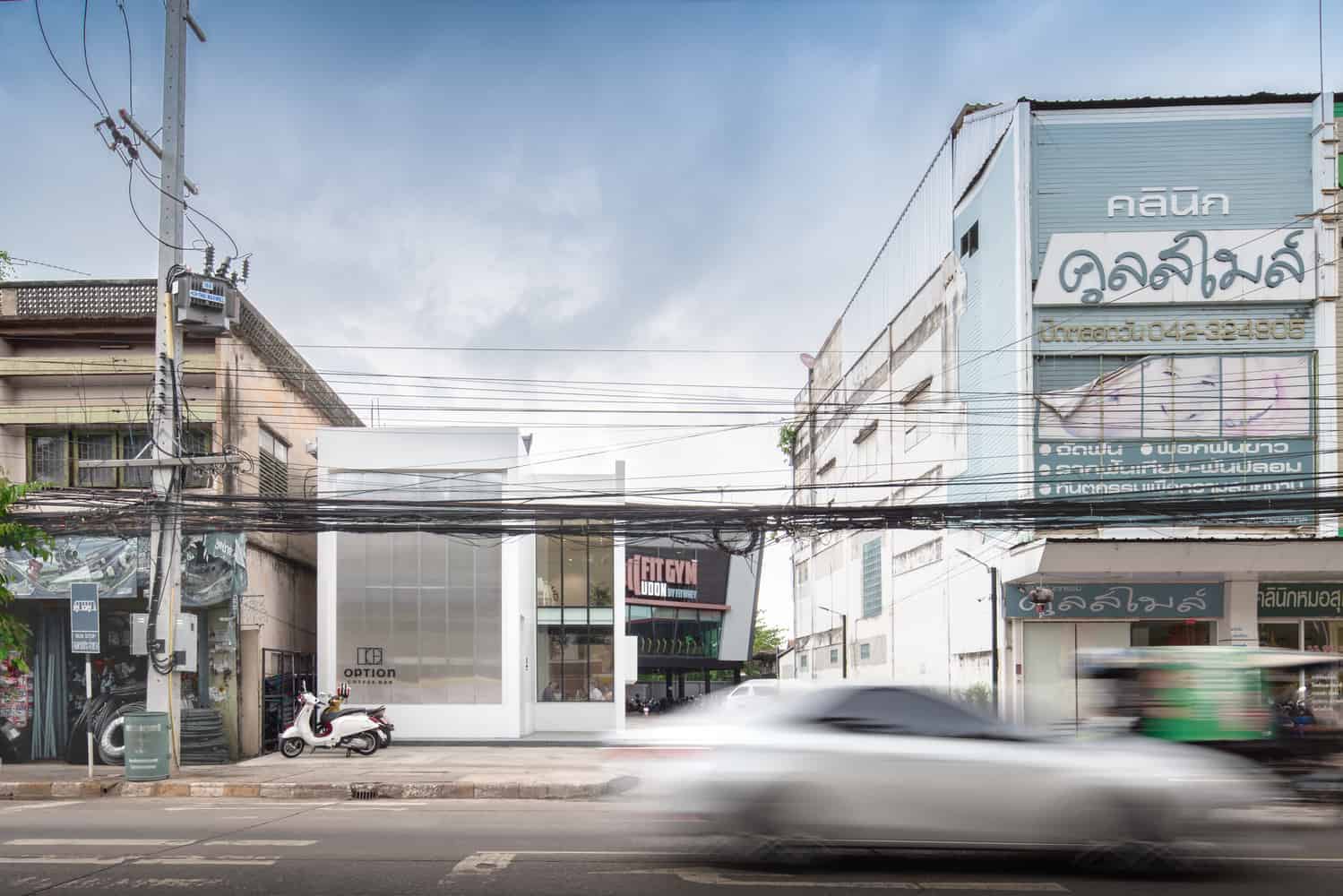 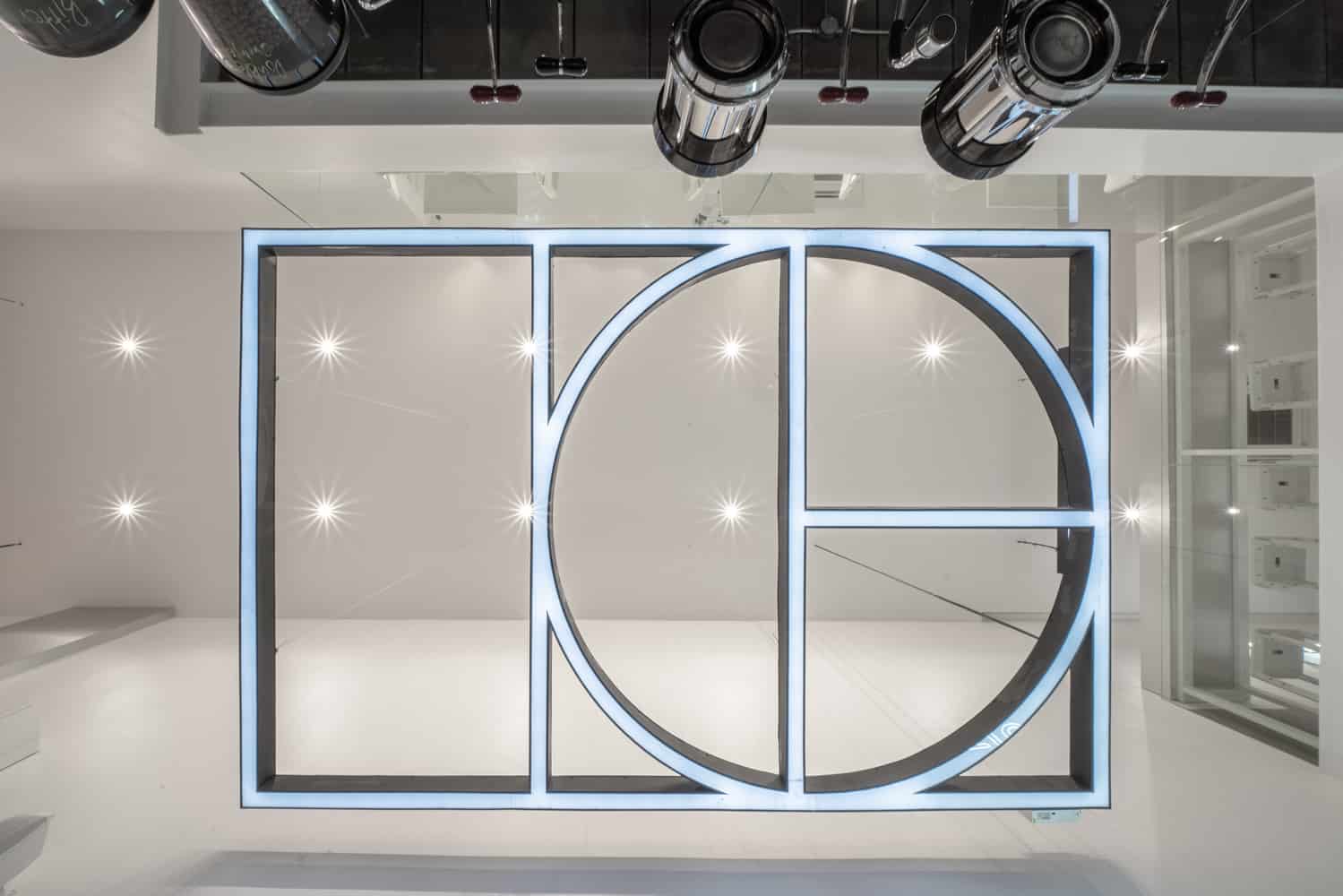 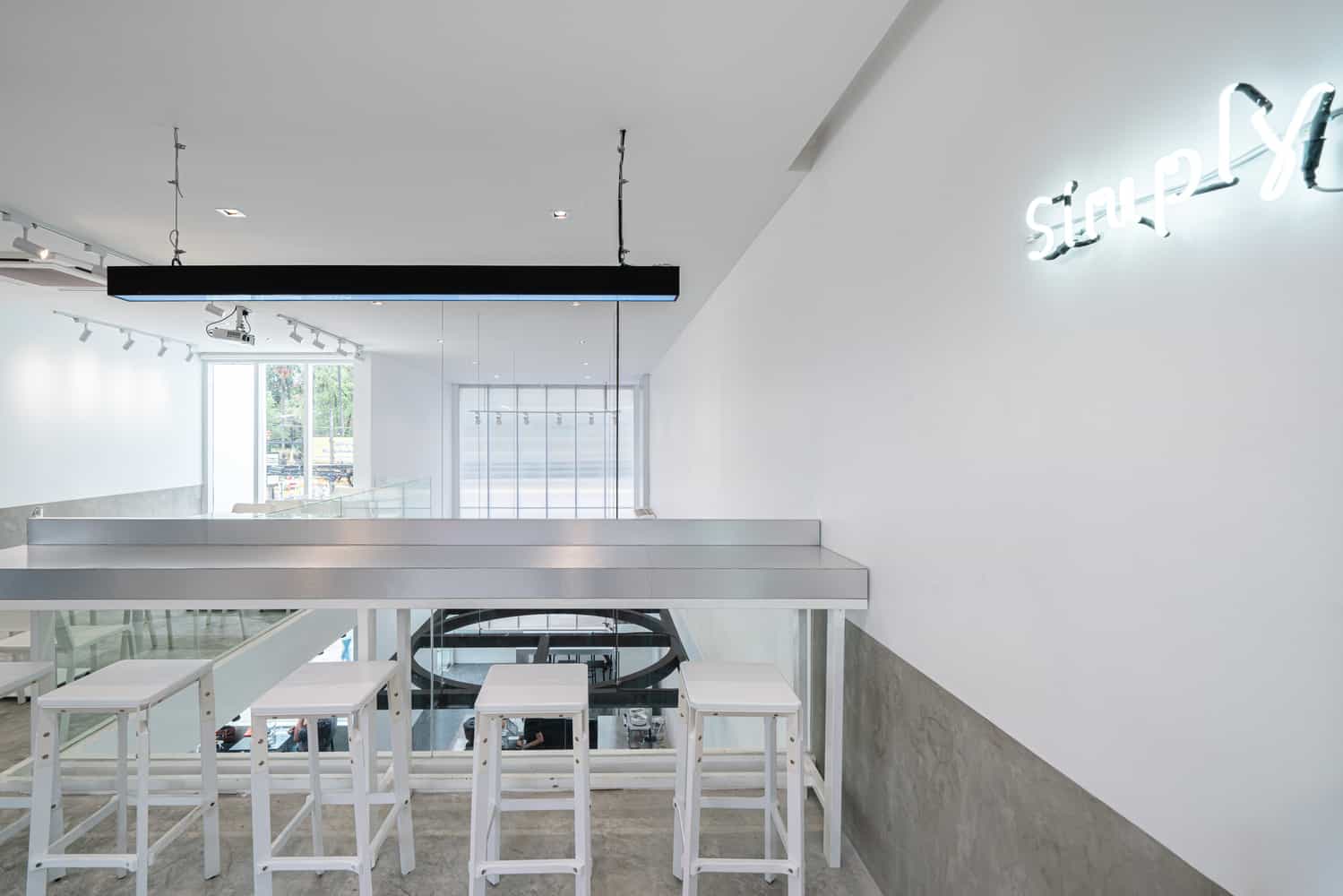 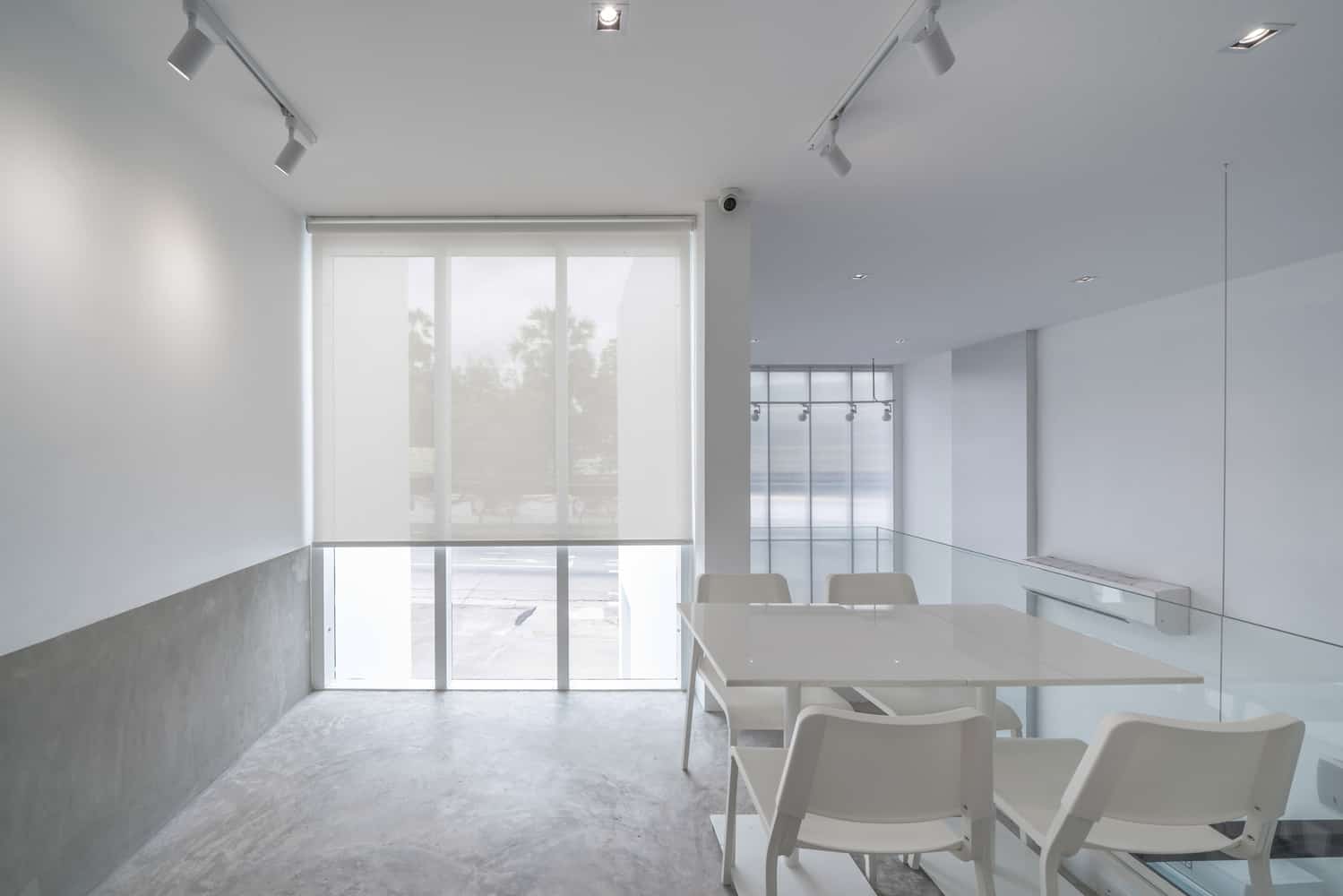 In the Mueang Udon Thani District of Thailand, innovators at TOUCH Architect have created a unique coffee experience that was conceptualized as a way to make the most of small urban spaces where no other business might successfully run. That’s how the Option Coffee Bar came about!

This little coffee shop is located in the inner city area of Udon Thani. Despite its small square footage, it can be accessed directly from the main street, which still makes it a prime business spot that other companies might not have taken advantage of so successfully. All together, the little space has three main functions: a cafe, a restaurant, and a bar.

Rather than being split up into different sections for these three functions, the whole spaces works within itself as a timeshare might. In the mornings, the spot is a cafe, bakery, and health food restaurant and store. The afternoons become less about coffee and baked goods and more about serving full nutritious lunches, while the evenings add a full craft beer menu to the repertoire.

The timesharing functions of the space presented designers with unique challenges in terms of organization and layout, but they handled them magnificently and with max efficiency. Besides being built to suit all of the different functions it features, the coffee shop was also built in a fluid, open concept way that is diverse and allows constant evolution of function.

There are two floors in the building. The first boasts the cafe and a counter bar, which see the most traffic in the mornings. On the second floor, referred to as the mezzanine, one finds only customer seats, but these are spaces intentionally created to suit studying and socializing, depending on the time of day, and customer needs.

What really makes the mezzanine floor unique is the fact that most of the seating provided is free floating and without defined form,  rather than being arranged in booths and rows of tables. This lets customers organize it however their social groups require, depending on why they’re visiting and during which part of the day.

Filling the mezzanine with loose furniture serves another purpose too! This lets staff clear the space out entirely every once in a while to host events, like temporary art showcases. Once the chairs are removed, the upper floor becomes the idea party space, giving serving staff and those ordering a slightly removed area for clearer communication away from the party.

From the outside, the coffee shop looks like a simple, quite unassuming white box. This was intentional because designers wanted to create a contrast between the new business and the otherwise tall, grey urban context of the street. Besides that, keeping the shop’s exterior minimalist and light shifts focus to the artists elements on the inside without distraction.

The colour scheme inside the building is another way in which designs kept things interesting and contrasting without drawing so much attention that customer attention is drawn away from the artistic displays or even each other. The entire colour scheme of the furnishings have been kept to black and white so that they contrast well within themselves but draw little attention from the people visiting and things taking place in the space at any given moment.

At night, when owners want to draw attention inside the building and towards certain places, they have the built-in ability to play with light. Already, a translucent visual “void” exists in the front facade of the building. This is built of clear-colour polycarbonate, which manipulates the natural light coming into the building from either the sun or the streetlights.

At night, staff can turn on a series of multi-coloured interior lights when they open the bar. At this point, light flows out of the translucent void in the facade, drawing more attention from the street and intriguing the public so that they come in, visit, and see whatever art might be on display.