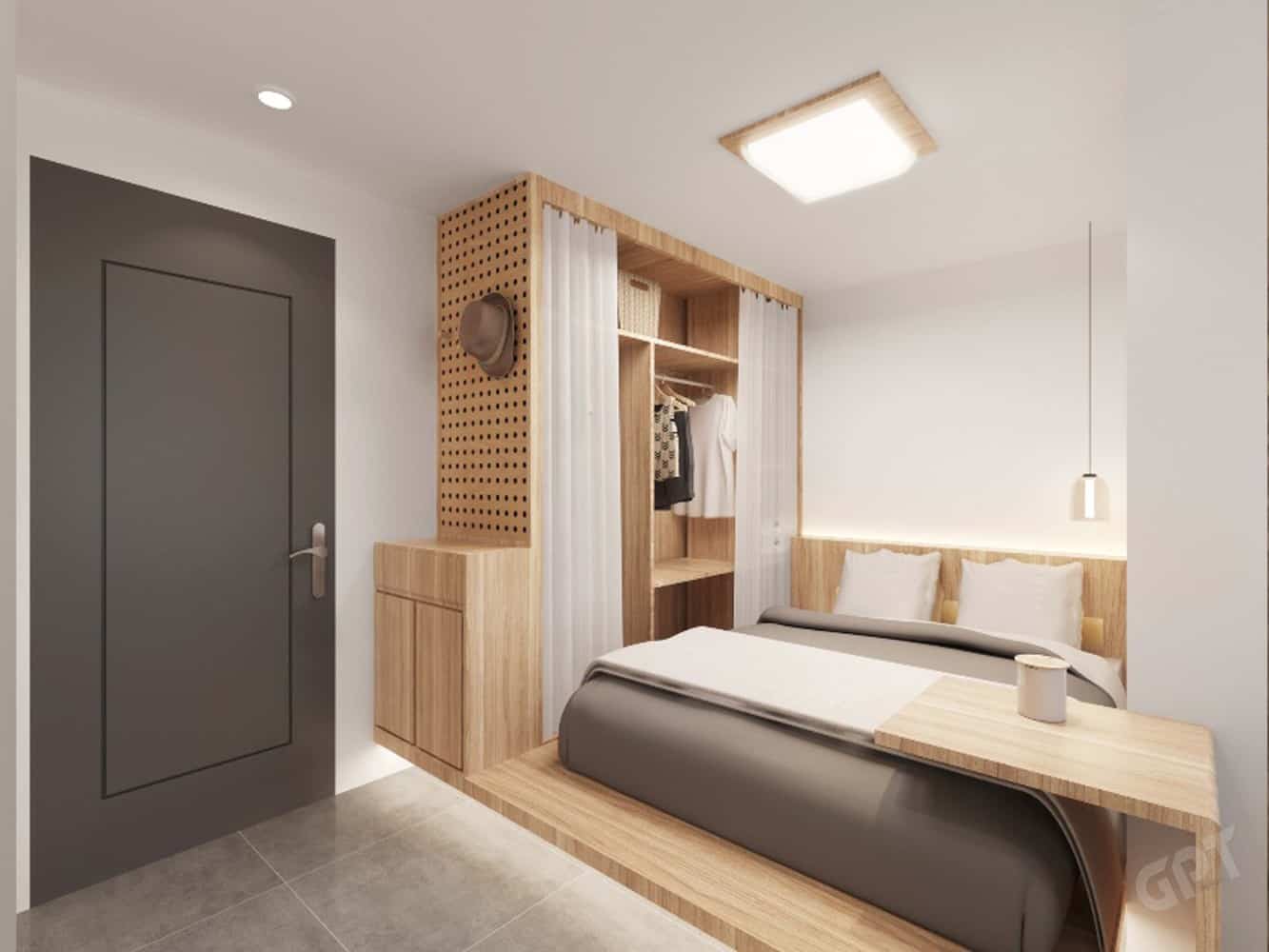 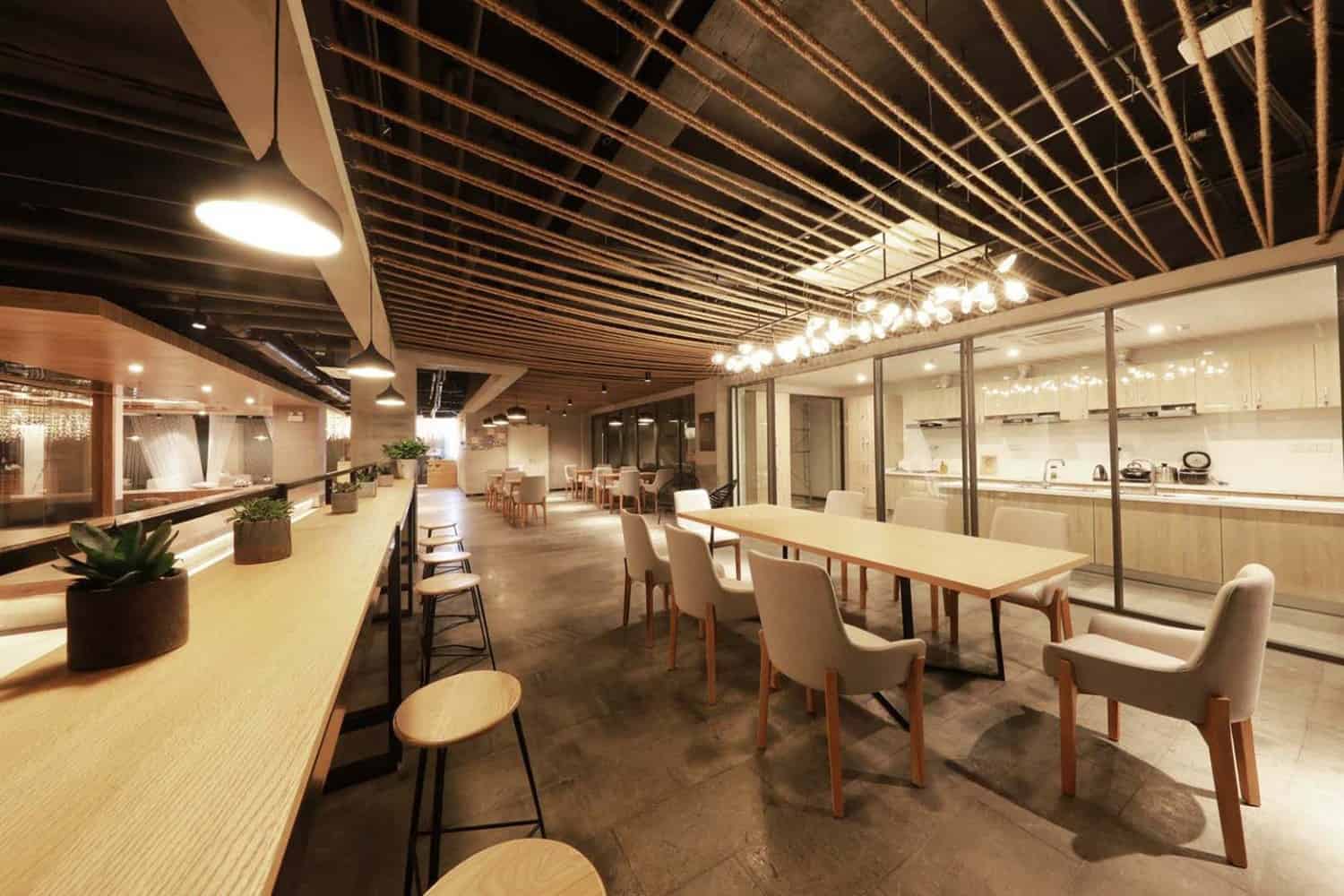 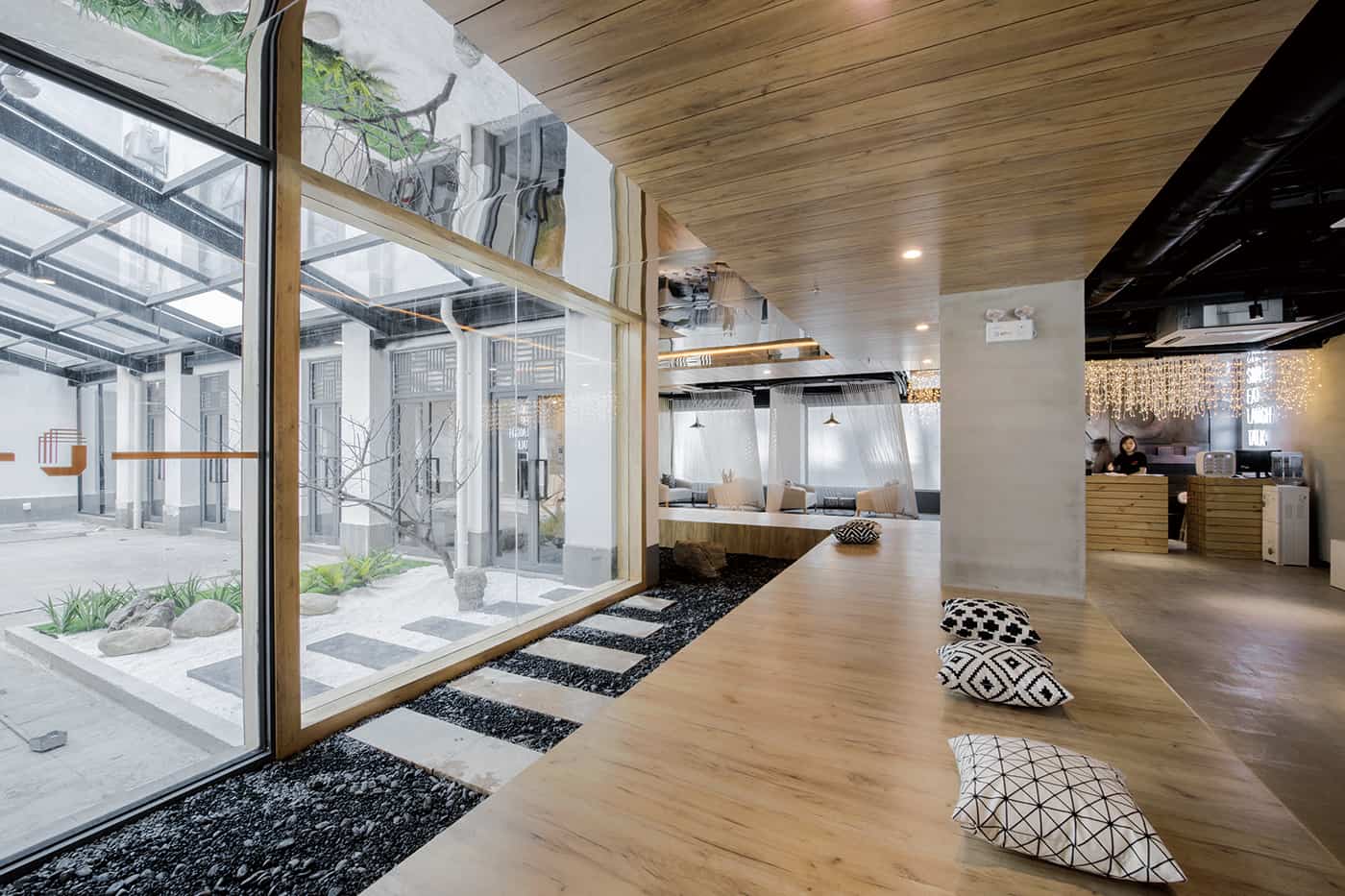 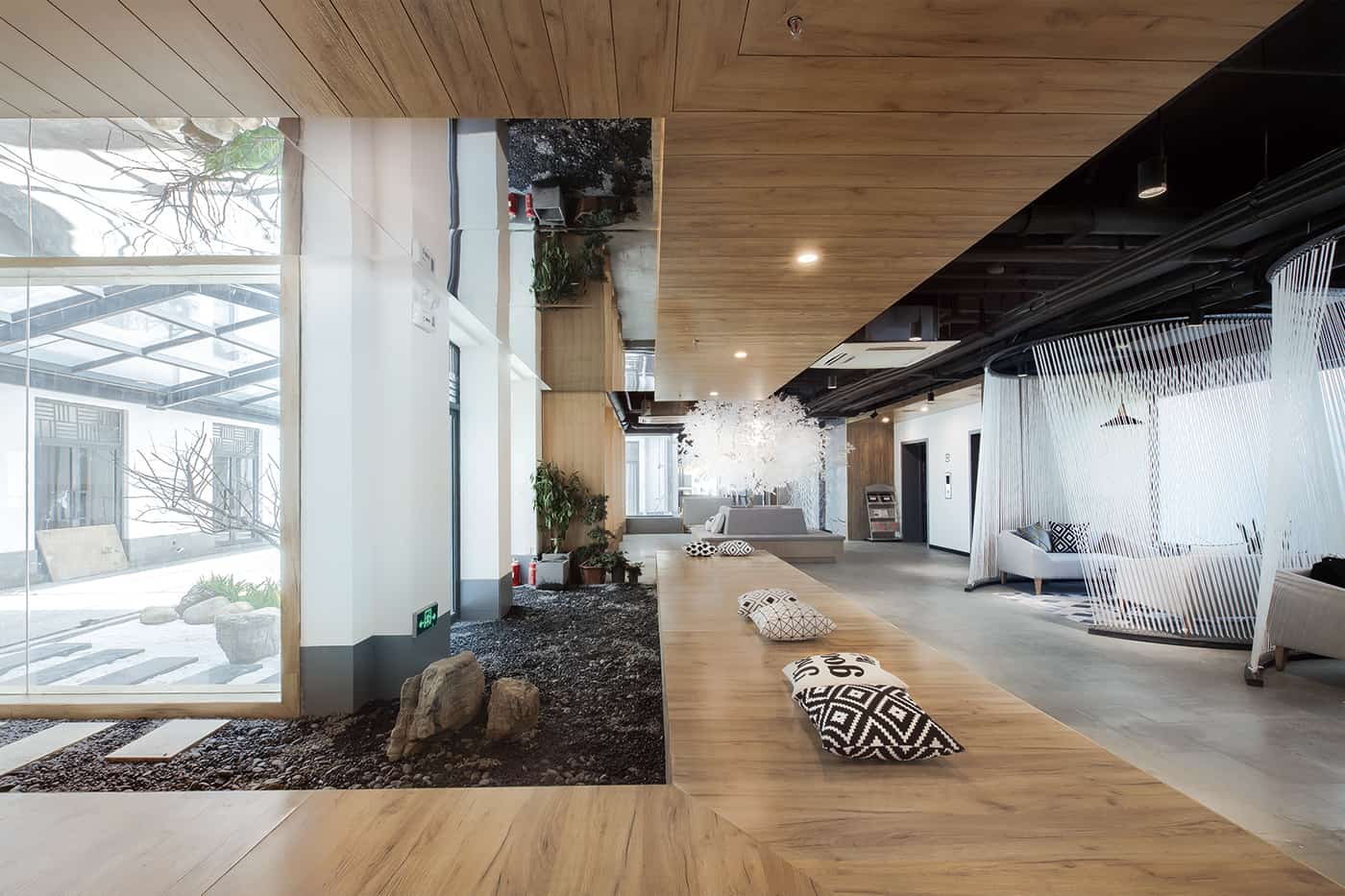 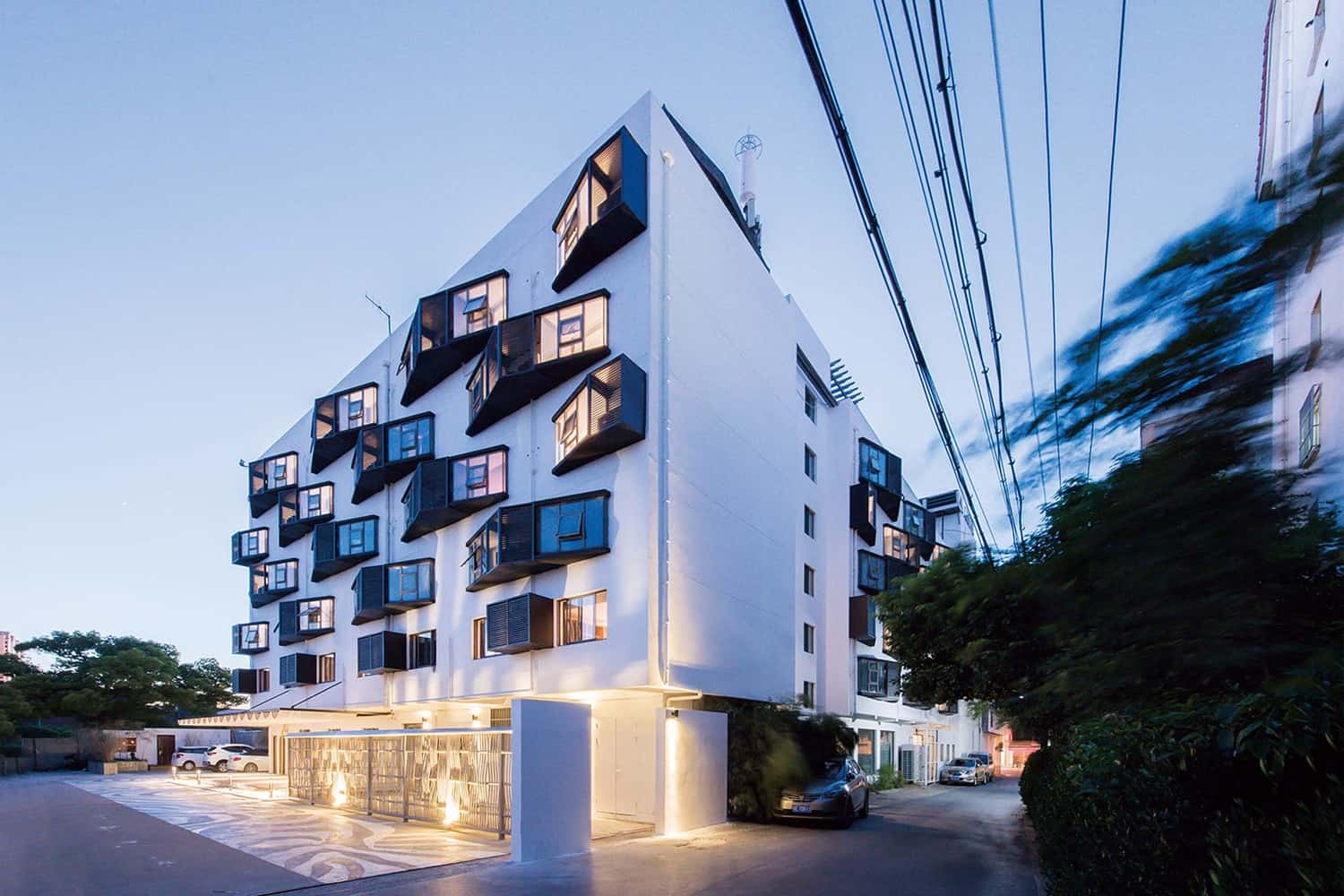 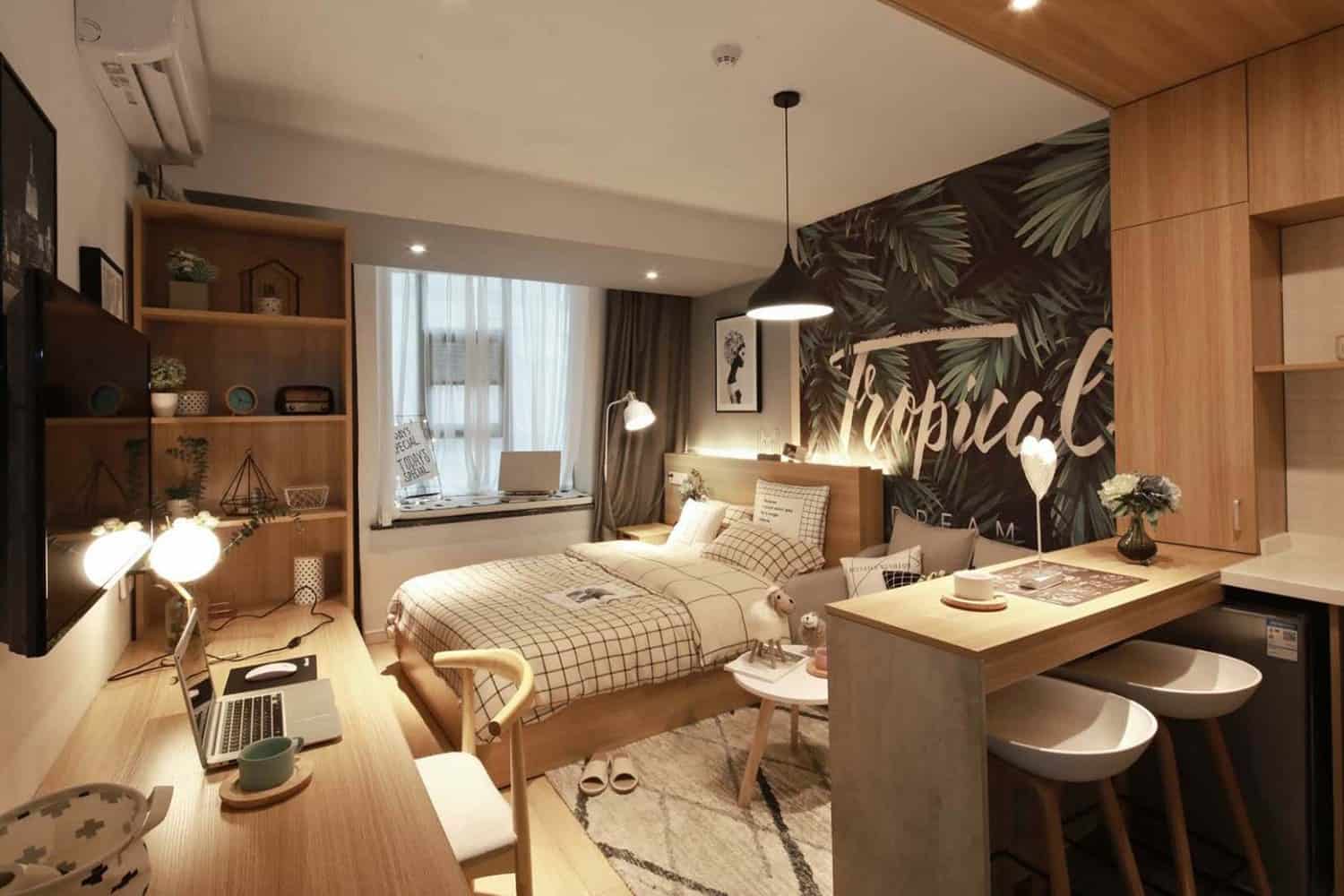 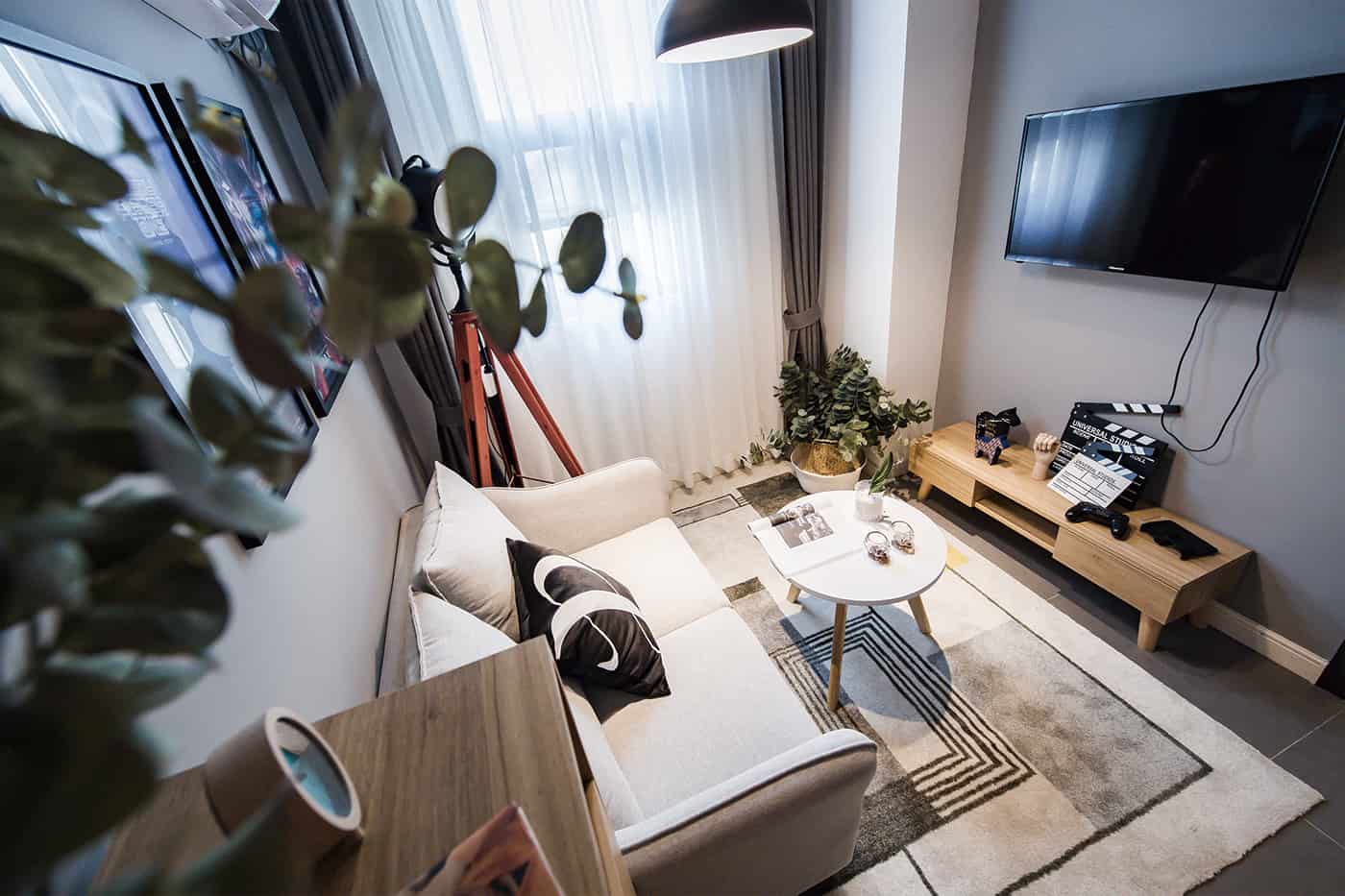 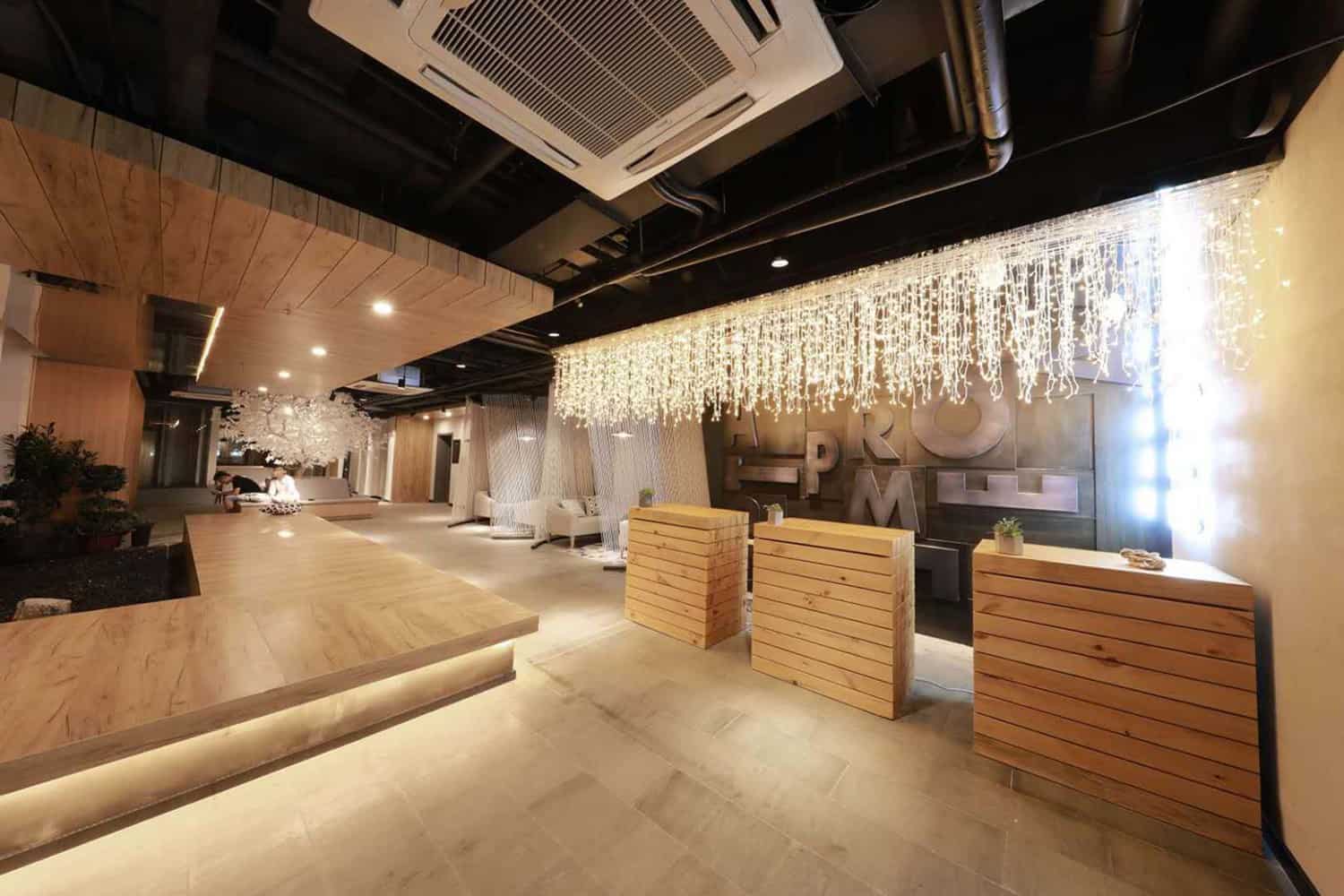 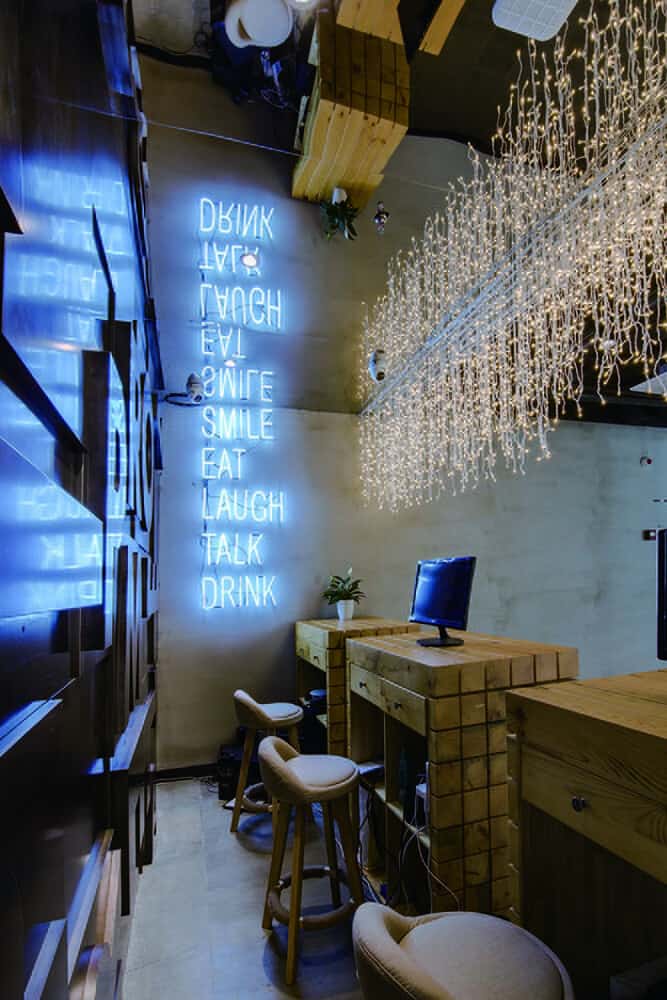 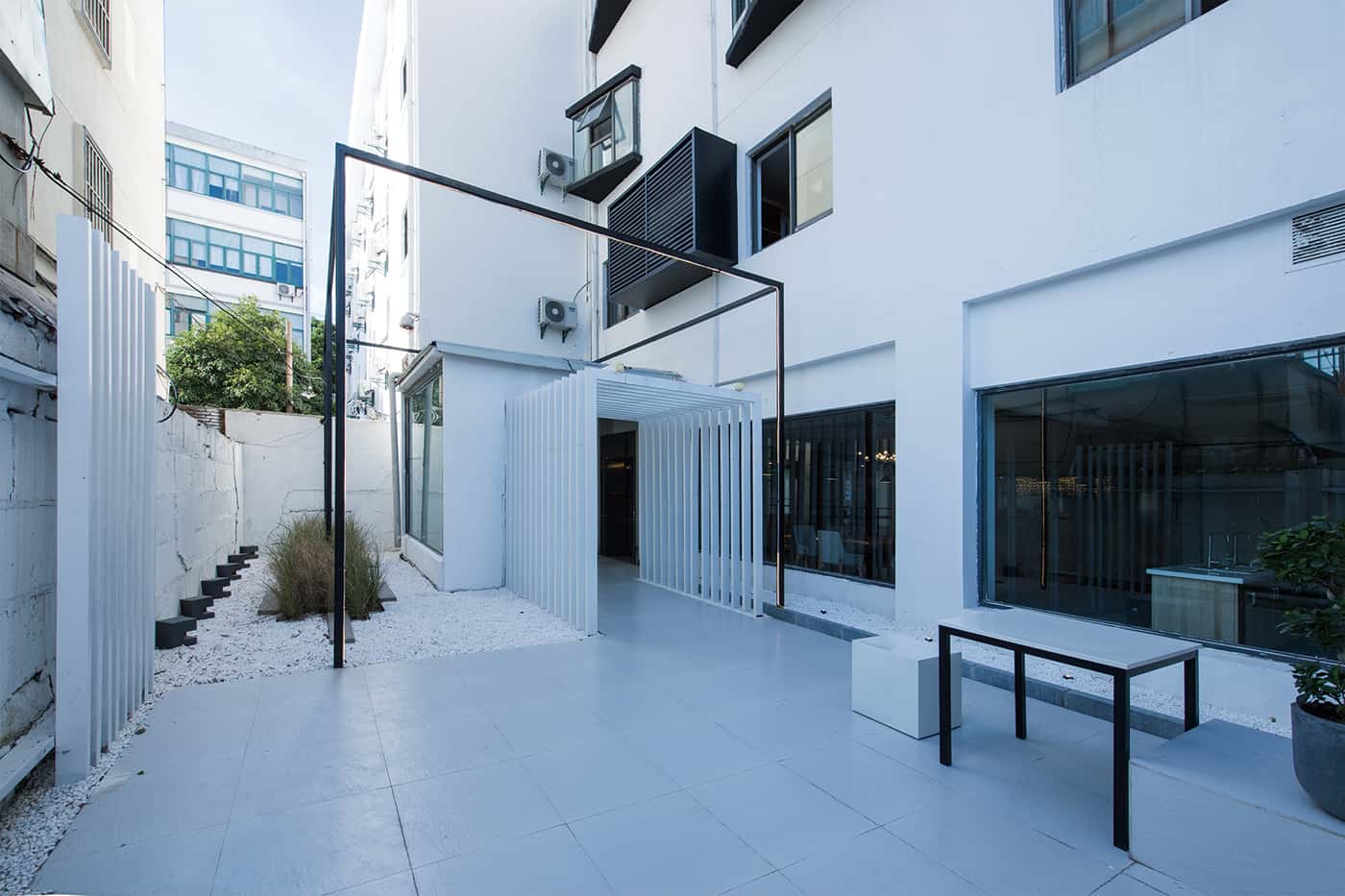 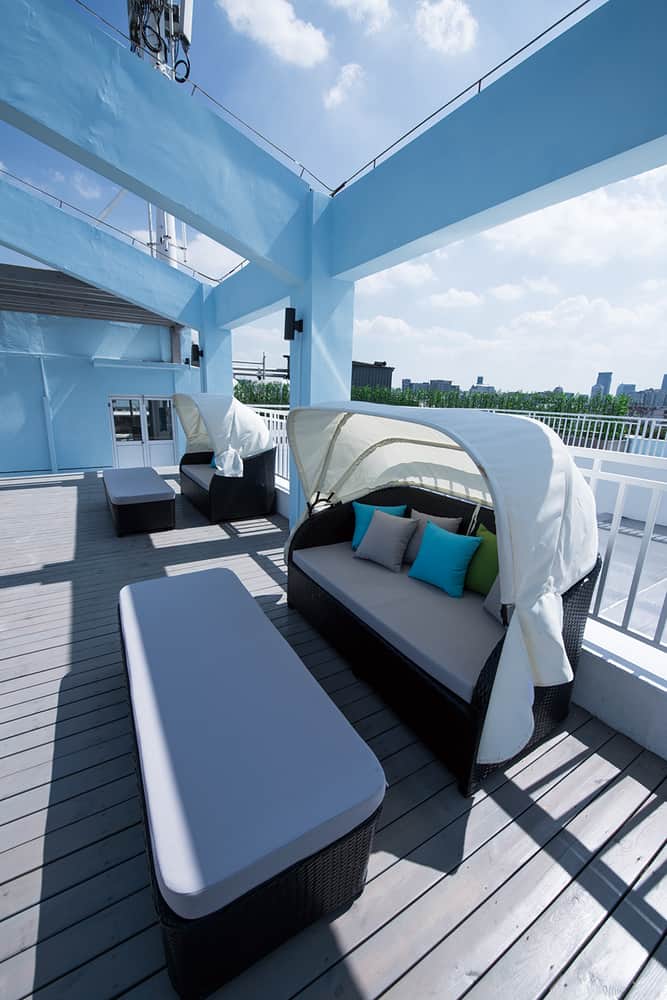 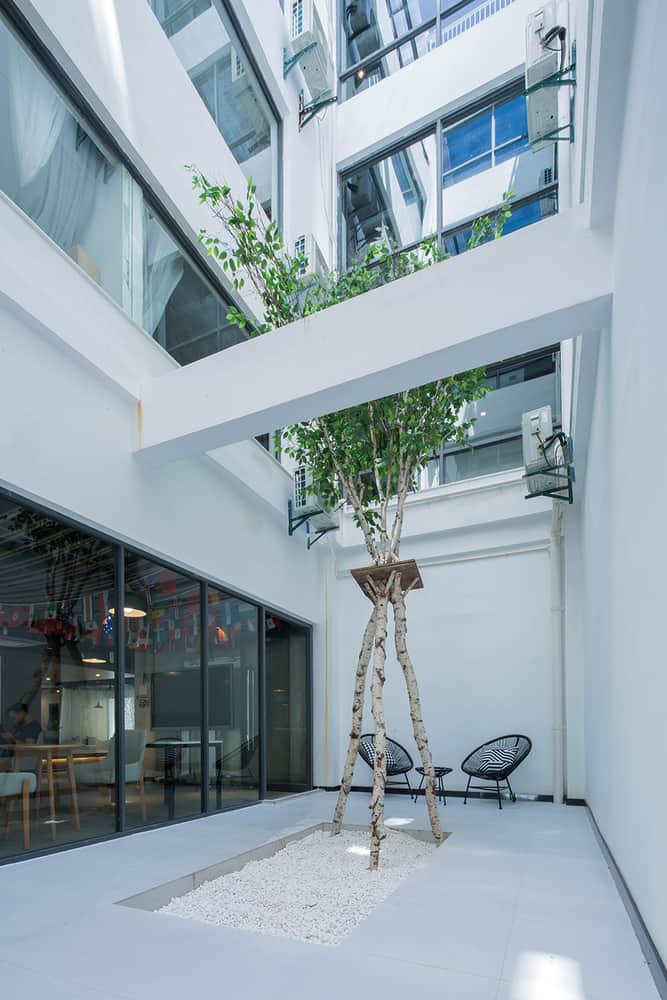 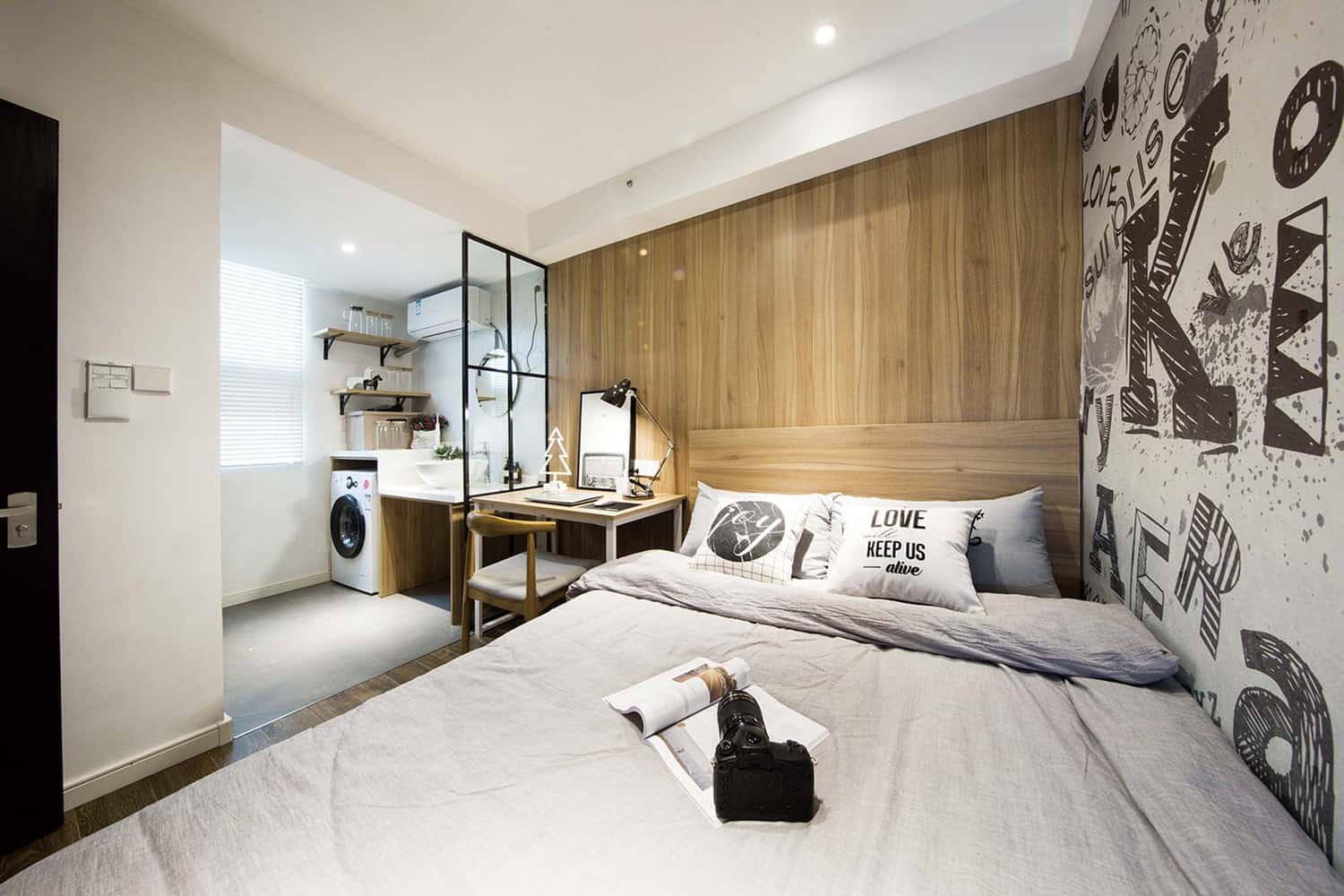 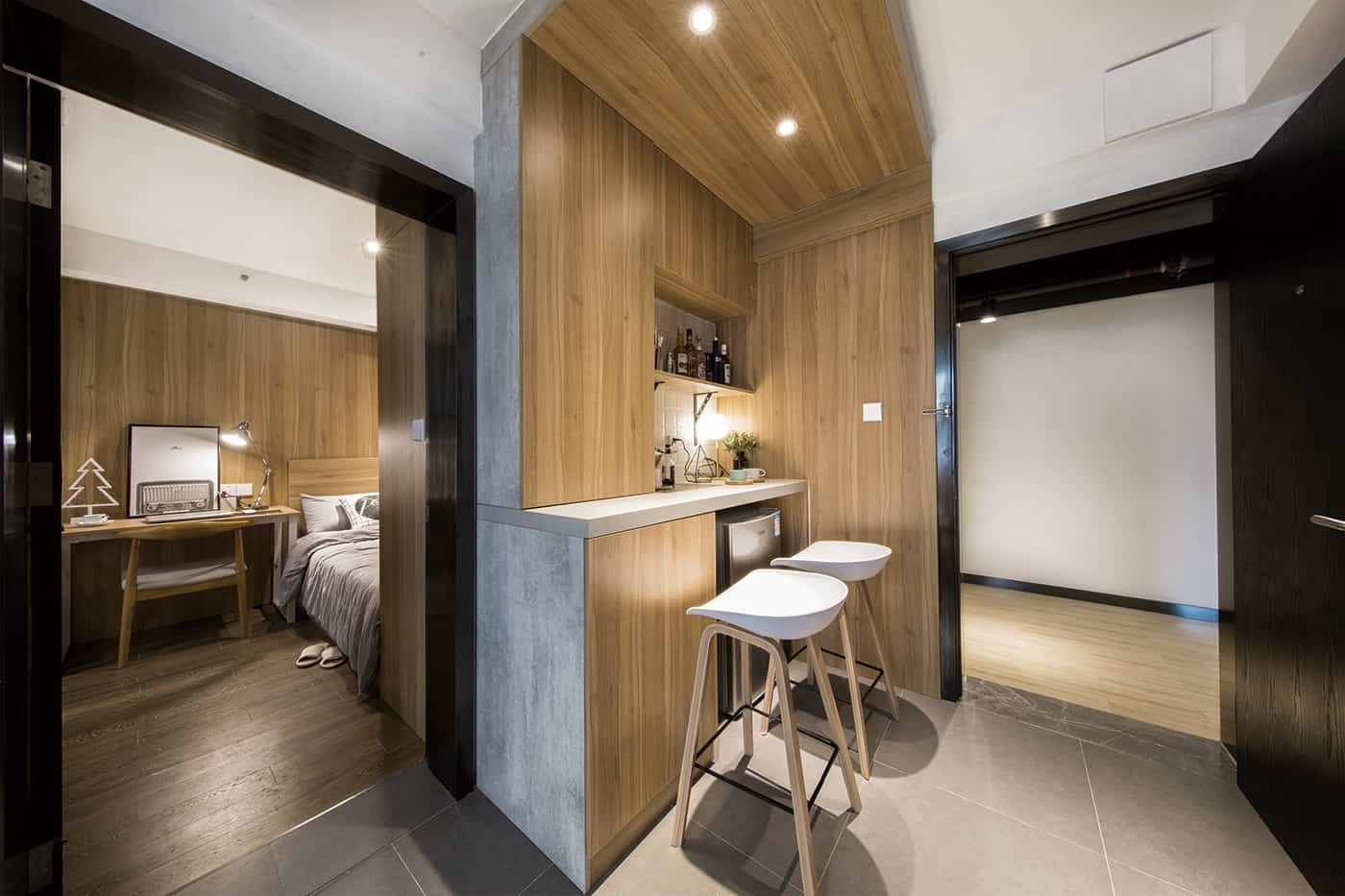 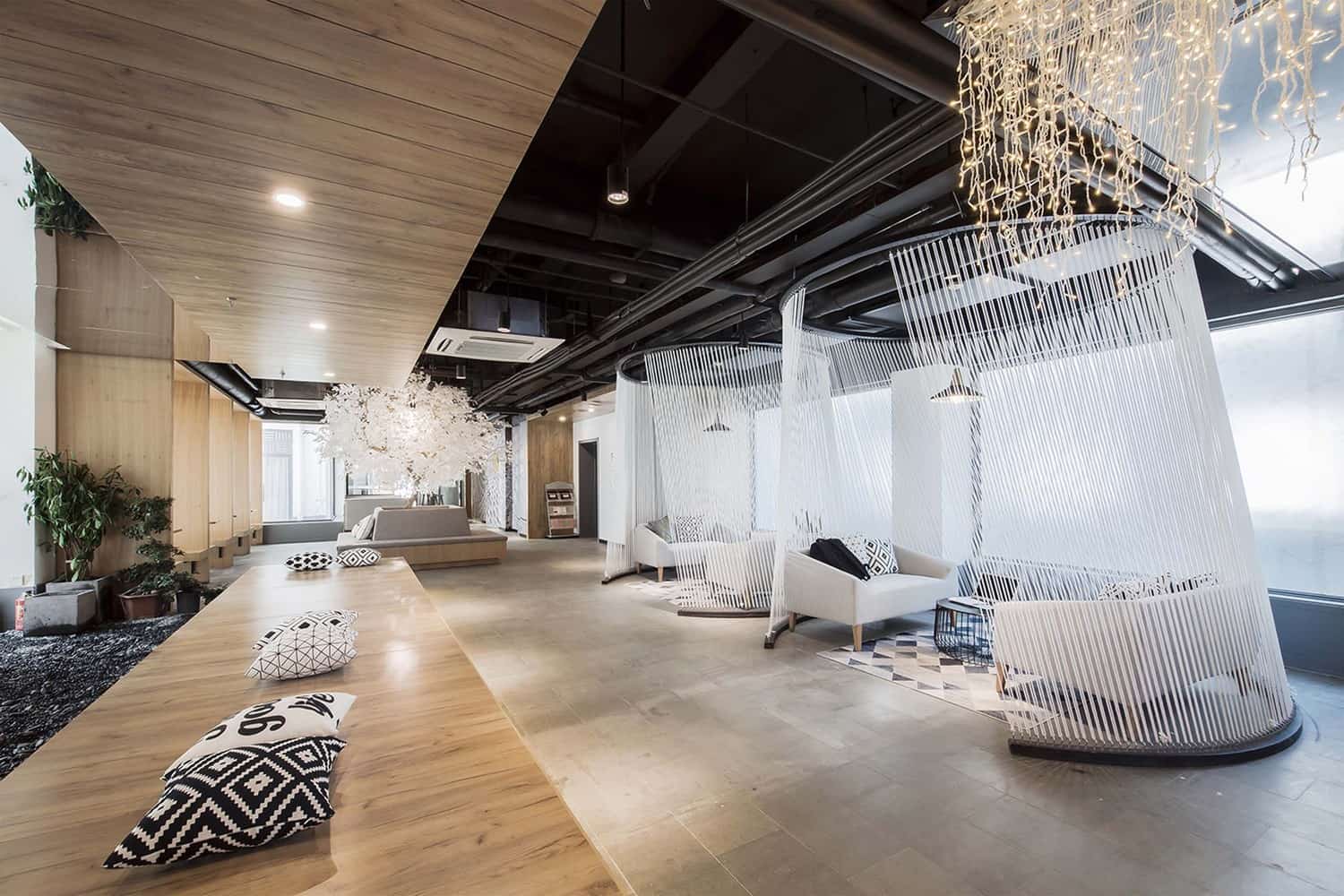 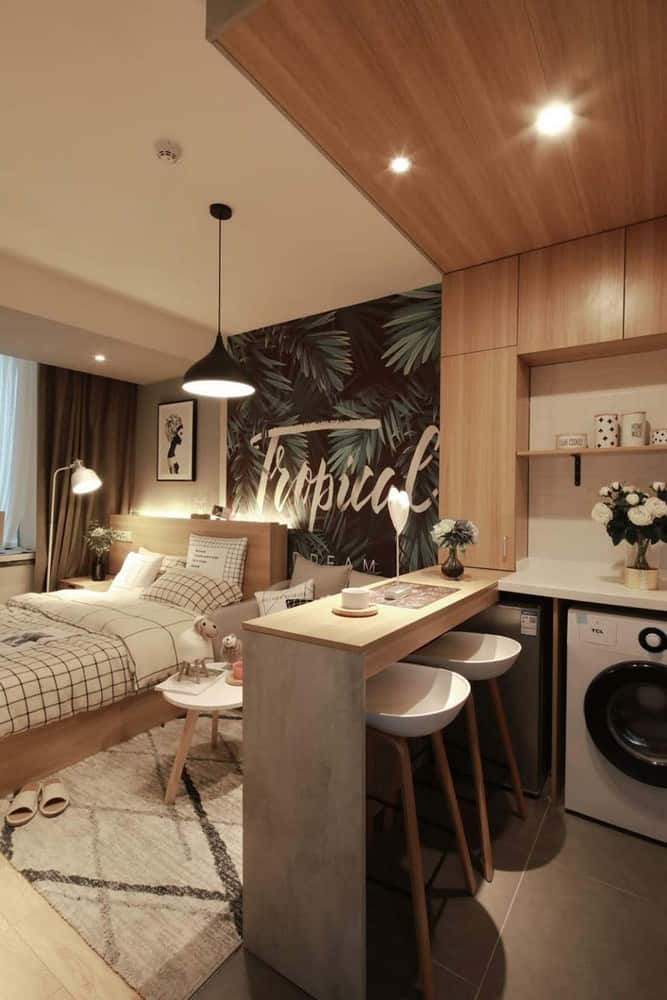 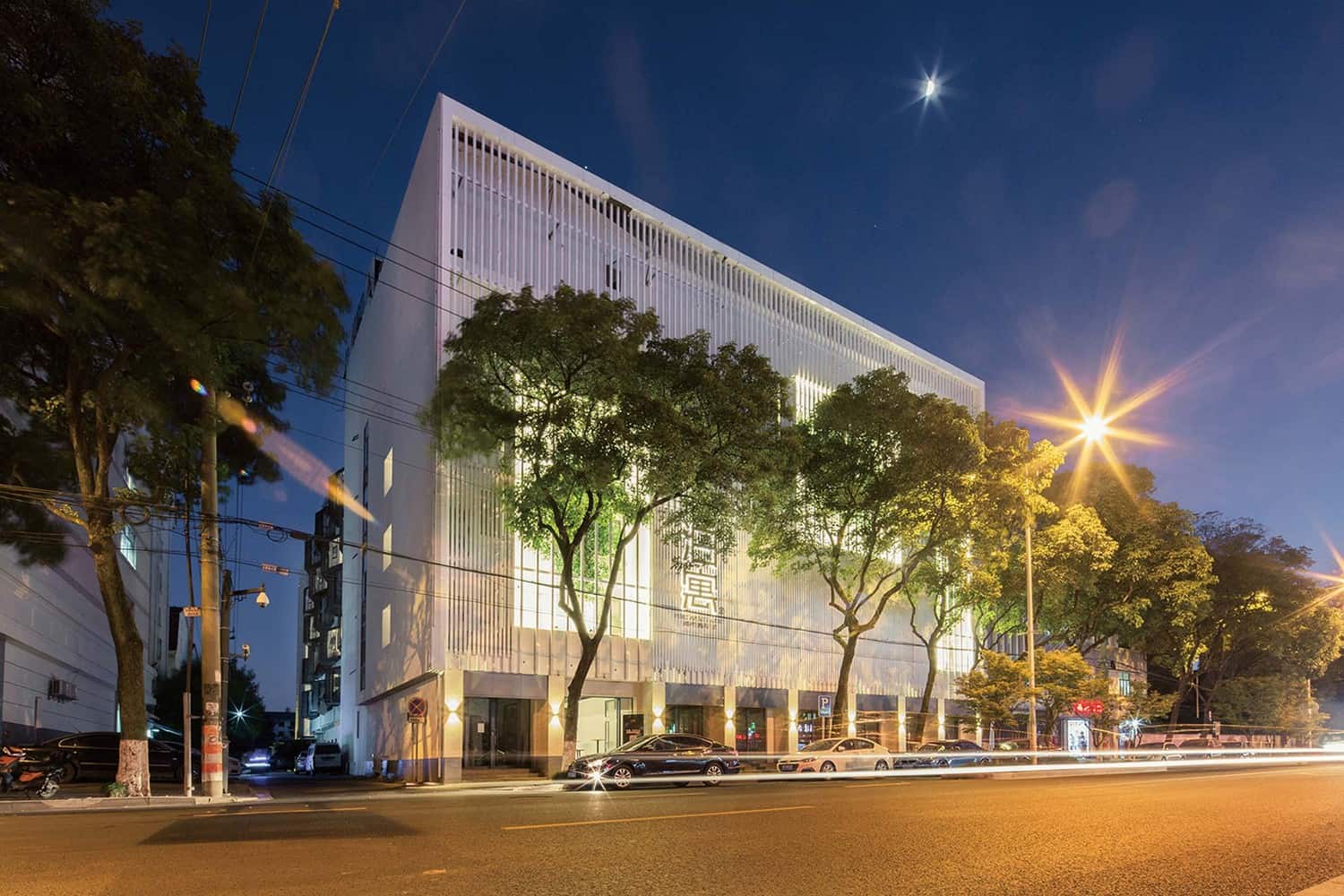 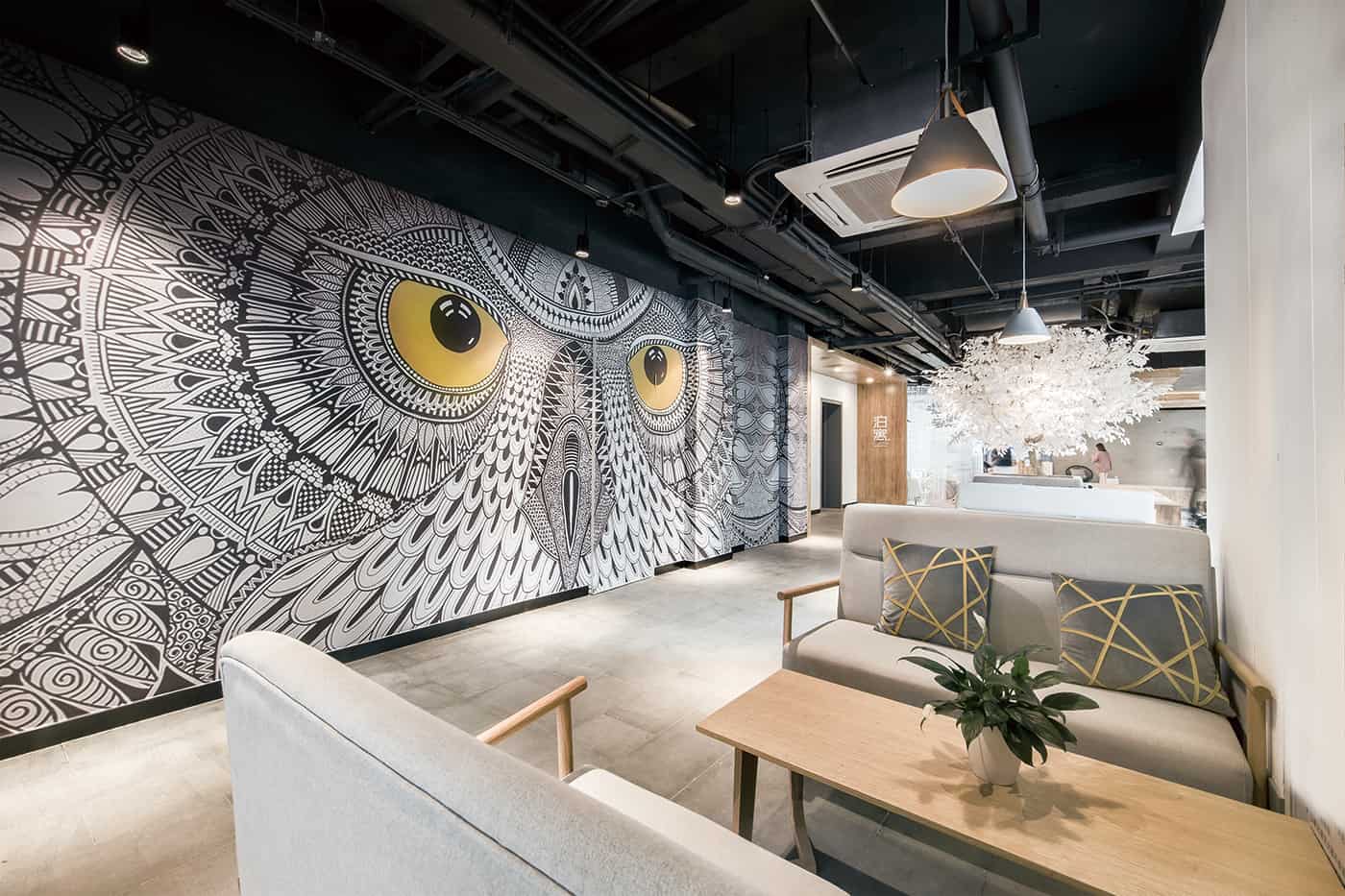 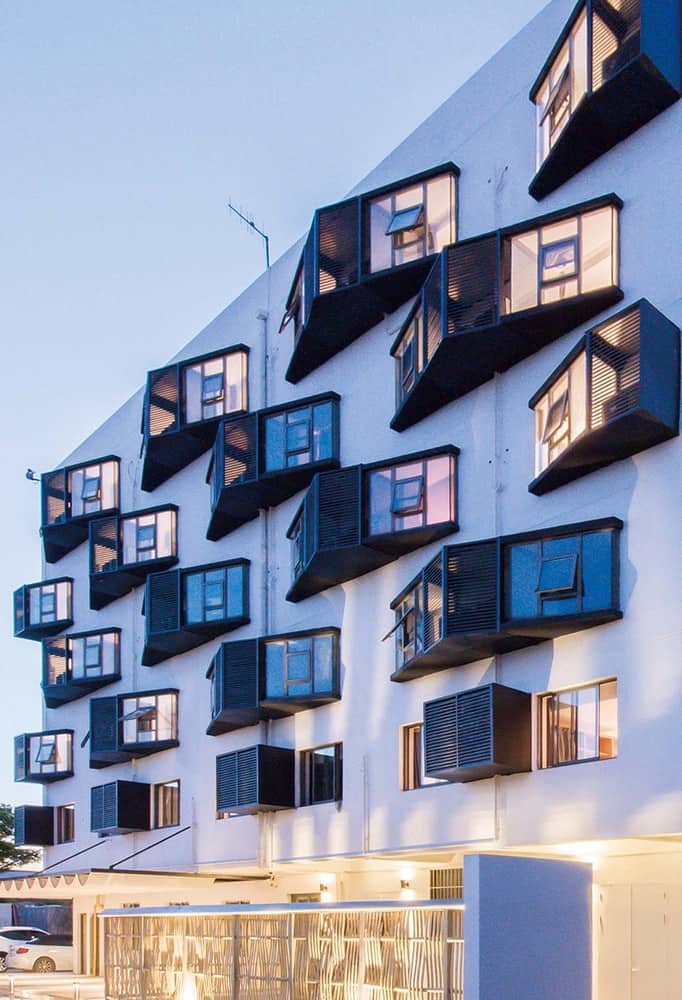 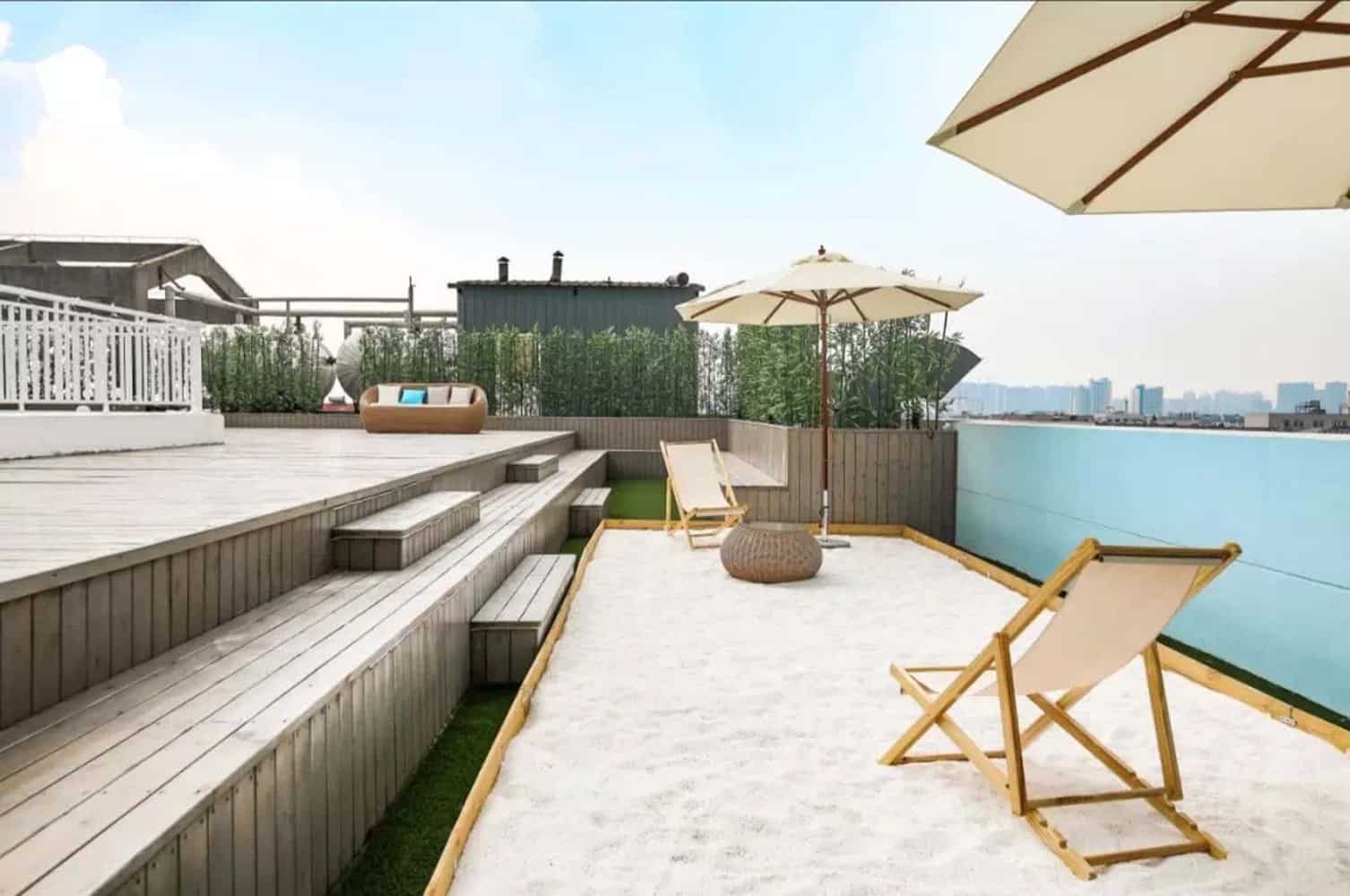 This fantastic new building was created using an older apartment complex as its base. The first step in the new project’s facelift was to remove the metal grilling on the facade of the original structure, as this made it look grey, old, and unwelcoming. Designers opted to cut into the newly revealed bare facade to create alcoves where plants might hang, creating 3D hanging gardens.

Another area of the original plot that was preserved as a base but changed and embellished was the courtyard in the centre of the community. This sits off a cutting edge social kitchen that is run by the Internet and features high public workspaces, blending perfectly into the outdoor leisure garden in a rather open concept way. The black and white stripes on the outer walls surrounding the courtyard create a visual effect like that of wind rippling water.

In the spaces surrounding the leisure garden, a calming, spa-like effect was created by finishing most of the atrium space with natural wood colours and light concrete accents where more solid material was required. This creates beautiful contemporary contrast while also affording the space a sense of calm typical of traditional gardens found in ancient cities.

The courtyard and atrium aren’t the only garden spaces! The building actually features a rooftop garden as well. This space has its own viewing platform for drinking in the city and even a barbecue area suitable for open-space hosting when renters have friends visit. The viewing platform is covered with a soft, white stand designed to mimic the beach, adding a sense of seaside calm to the space which is reinforced by decor accents in blues, teals, and other beach hues. This space has become quite famous around the city, since there’s no actual beach quickly accessible in the area.

One of the central priorities in building the individual apartments in the community was stellar Internet connectivity. The idea was so make the apartment’s functions efficient, new age, and cutting edge, so fantastic online connections are absolutely necessary. Most of things in the building, such as signing into the one site fitness club, shopping at the boutique retail locations nearby, and using the virtual canteen, are powered by wifi and the renter’s cell phone.

Although the apartments and the rooftop escape are accessible only to renters, the ground floor features a shopping space, more electronic vending services, and a social garden area that are fully accessible to the public. This makes it possible to socialize and have a whole day out with others without having to go far from one’s apartment at all if they don’t feel like it. It builds a sense of wider community right there in the community building!

One of the most popular things to do in the social space is to order food from the virtual food court, a 24 hour fast food delivery service run out of the buildings connection hub, and find a cozy, modern looking social pod to sit in around the public garden. The decor is undoubtedly modern but also quite wood heavy and spa-like, with stunning greenery surrounding all levels.

Besides the general public social spaces we’ve described, renters are afforded plenty of themed common escapes for time enjoyed outside their apartments. There’s the “House of Cards” area that is furnished and decorated in pure white with black outlines and artistic lighting, providing a thoroughly futuristic experience. There’s also the “rainforest inspired area that features cascading waterfall lights, wooden furnishings, greenery on every surface, and wooden details that feel somehow warm and also luxurious. Perhaps you’d prefer the simple seating designed to let renters take an unwinding break underneath a stunning sprawling tree when they first arrive back to the community after a busy day elsewhere before actually returning home.

In decorating and laying out the apartments, designers chose to gear their choices towards the young white-collar workers so typical of the surrounding urban area. They opted for fashionable Nordic aesthetics and MUJI style details to create a living space specifically for young people that feels, modern, high quality, and unique.

Inside the apartments, the Nordic influence brings a sense of fluidity to the design. Furnishings are integrated all into the main functions and each other to save on space and increase efficiency, almost to the point of qualifying as micro-living. The textures are simple, the shapes are flexible, and the details bear clear signs of local craftsmanship. The spaces are simple and practical but still charming to the point of feeling nearly luxurious despite their smaller size. This is more than made up for with the diverse common spaces the community offers right outside the apartment doors!

Photos provided by the designer.

The Chalet Les Gentianes 1850 in Courchevel, the French Alps