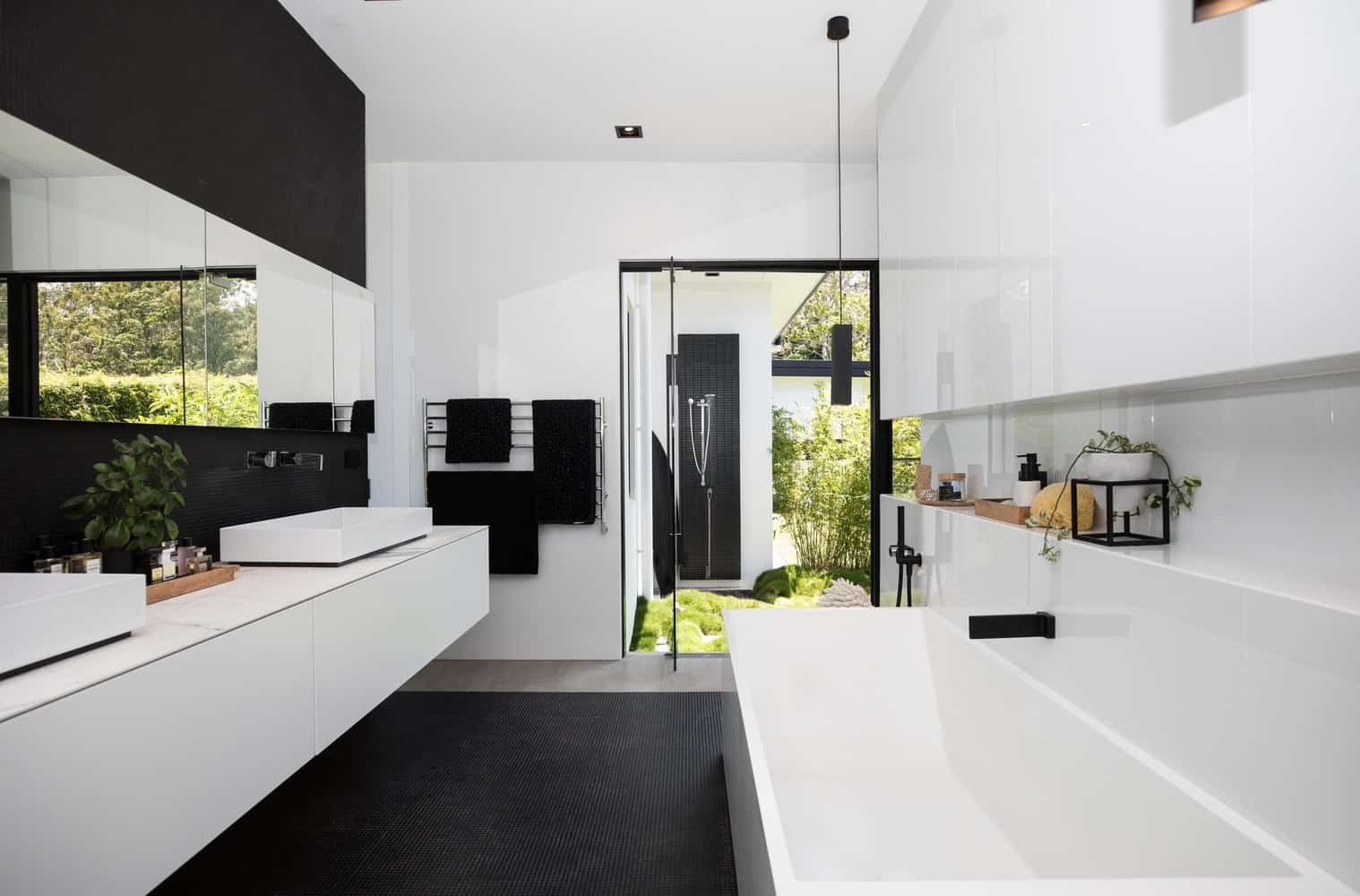 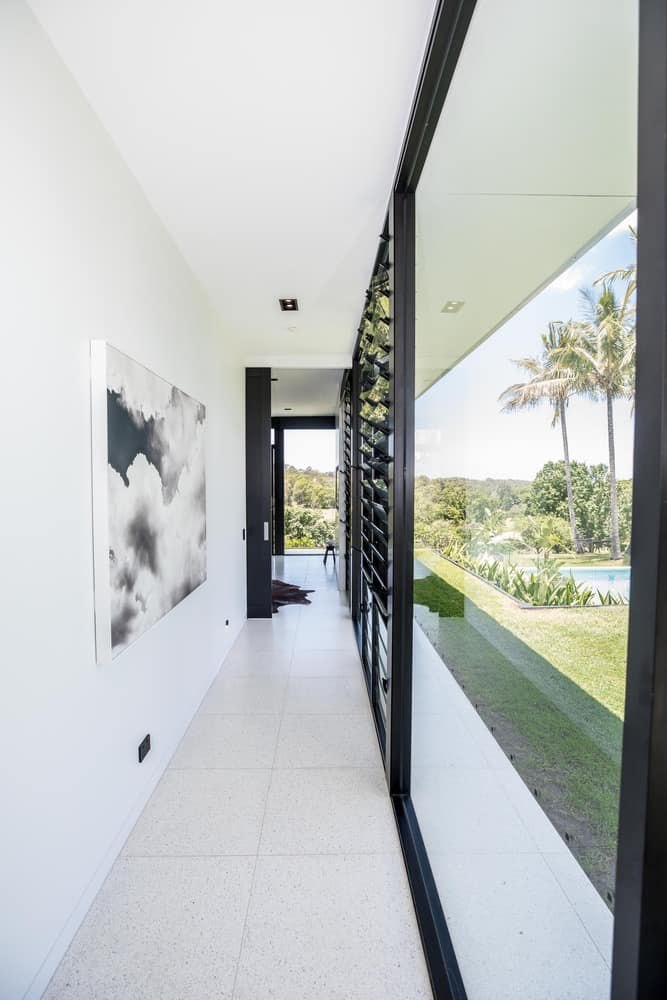 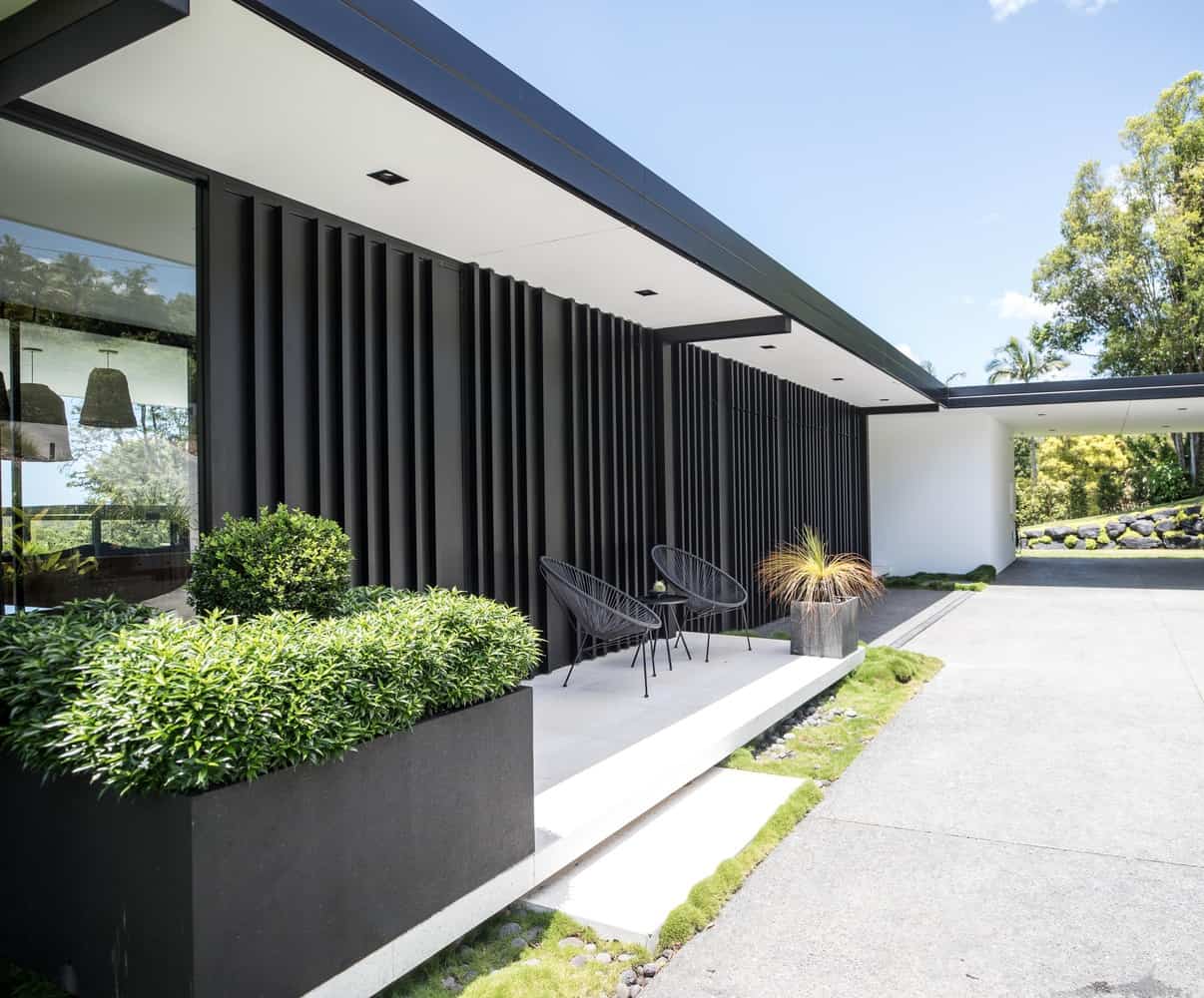 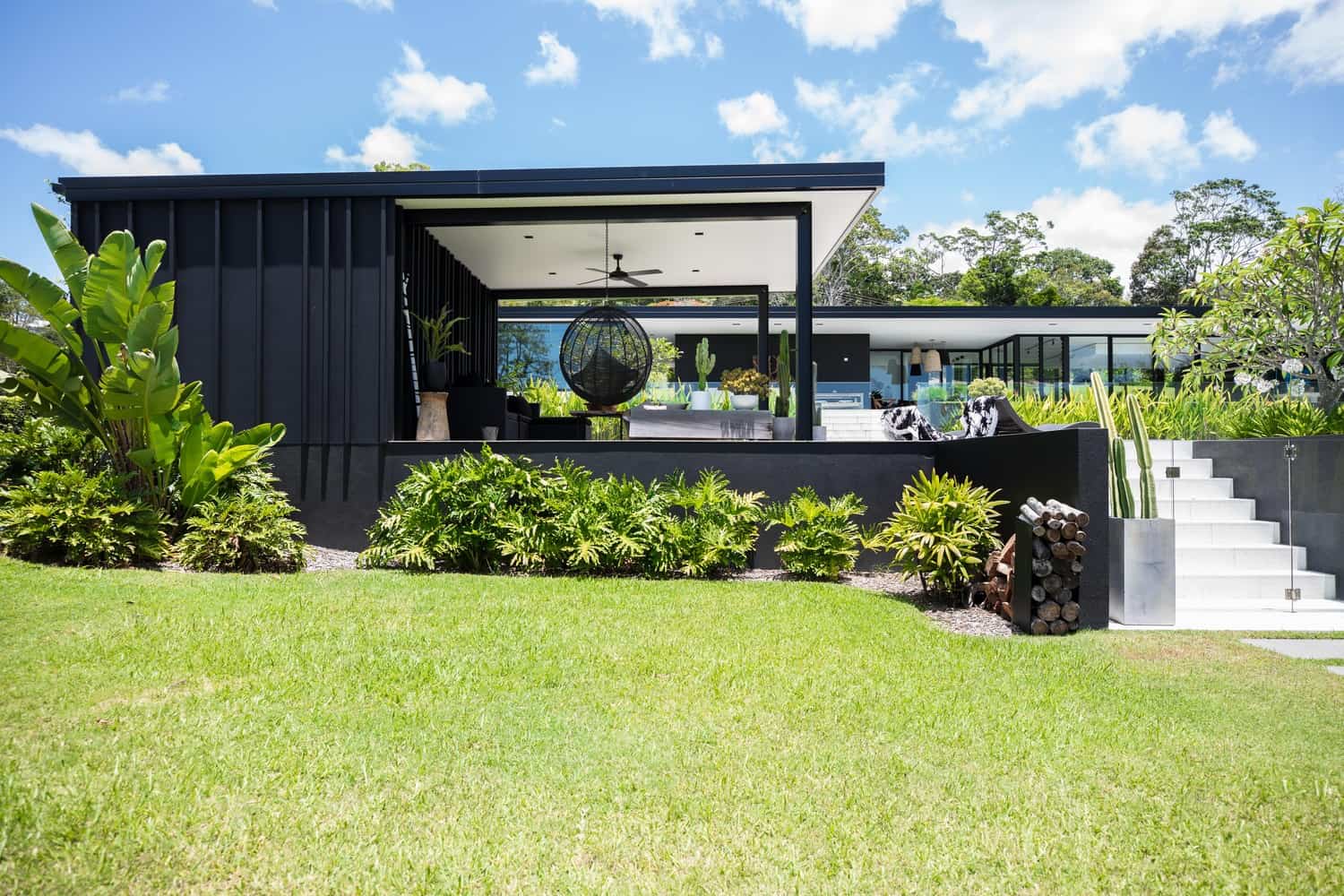 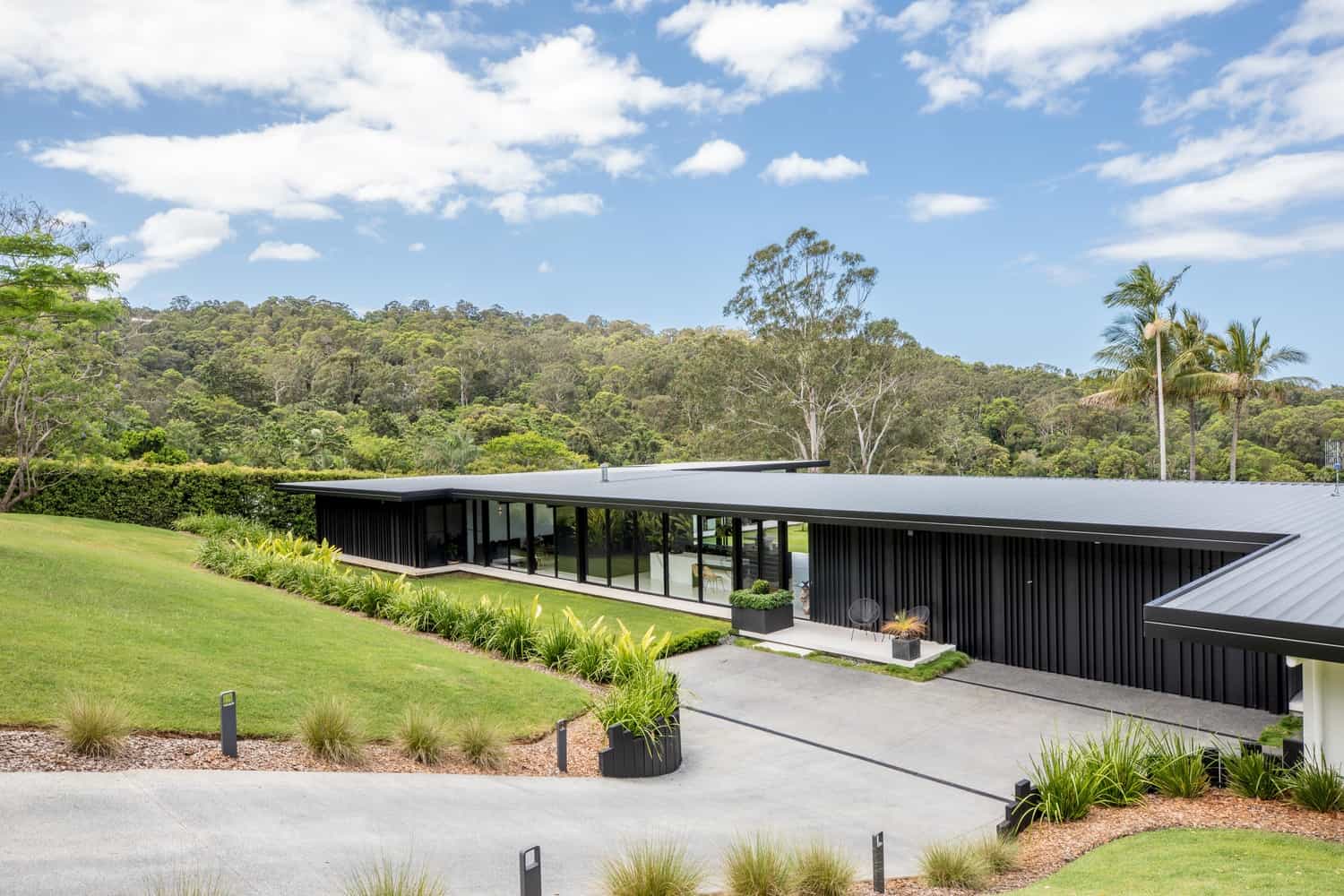 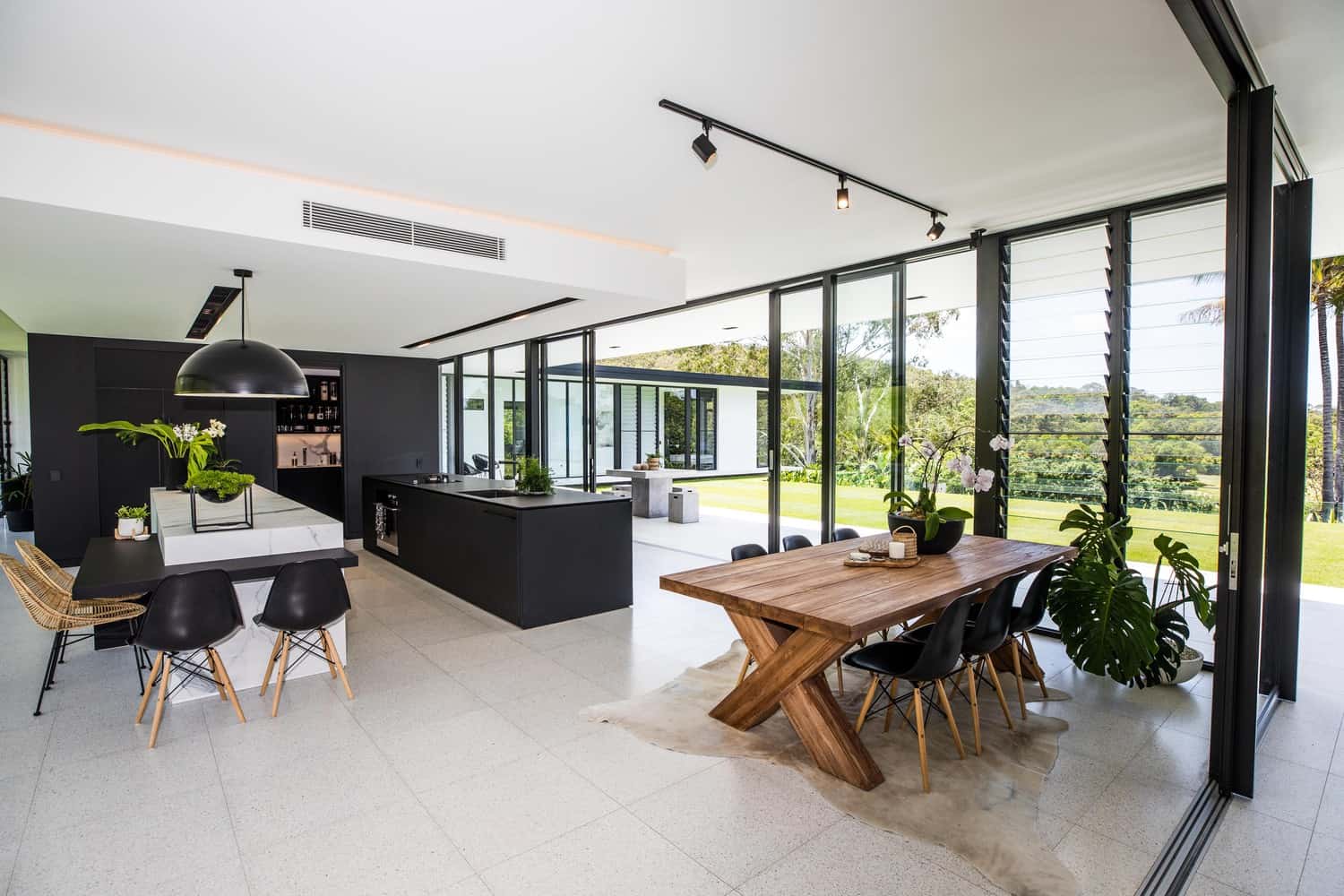 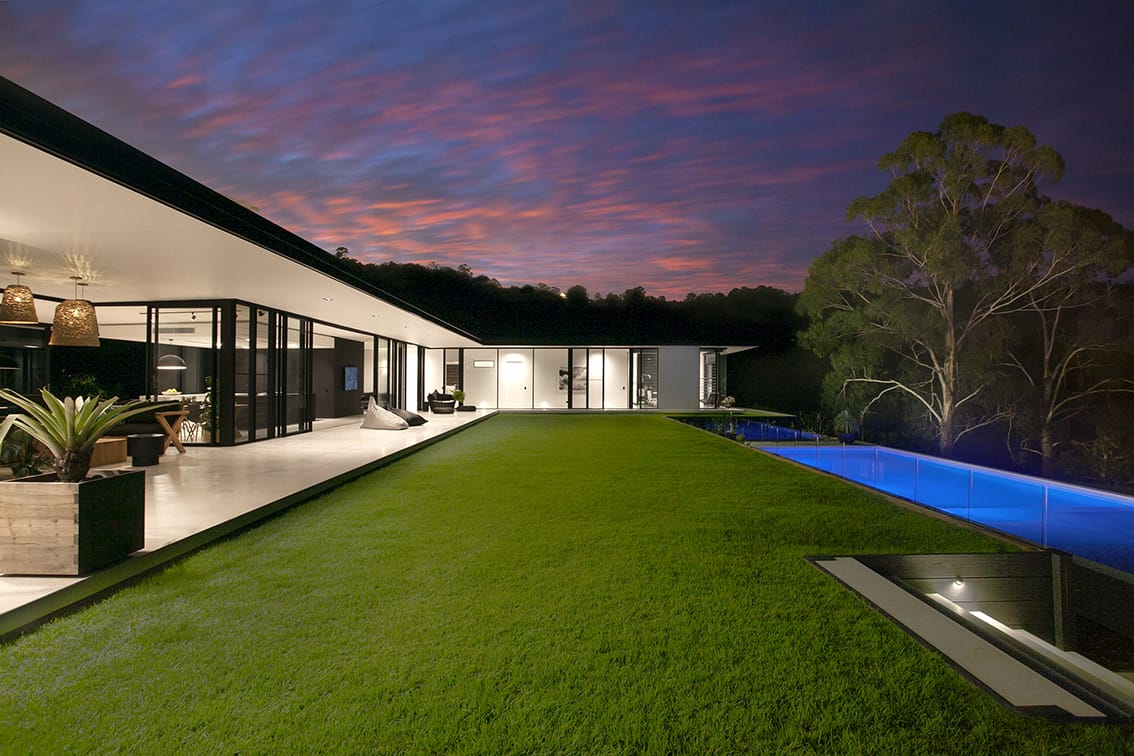 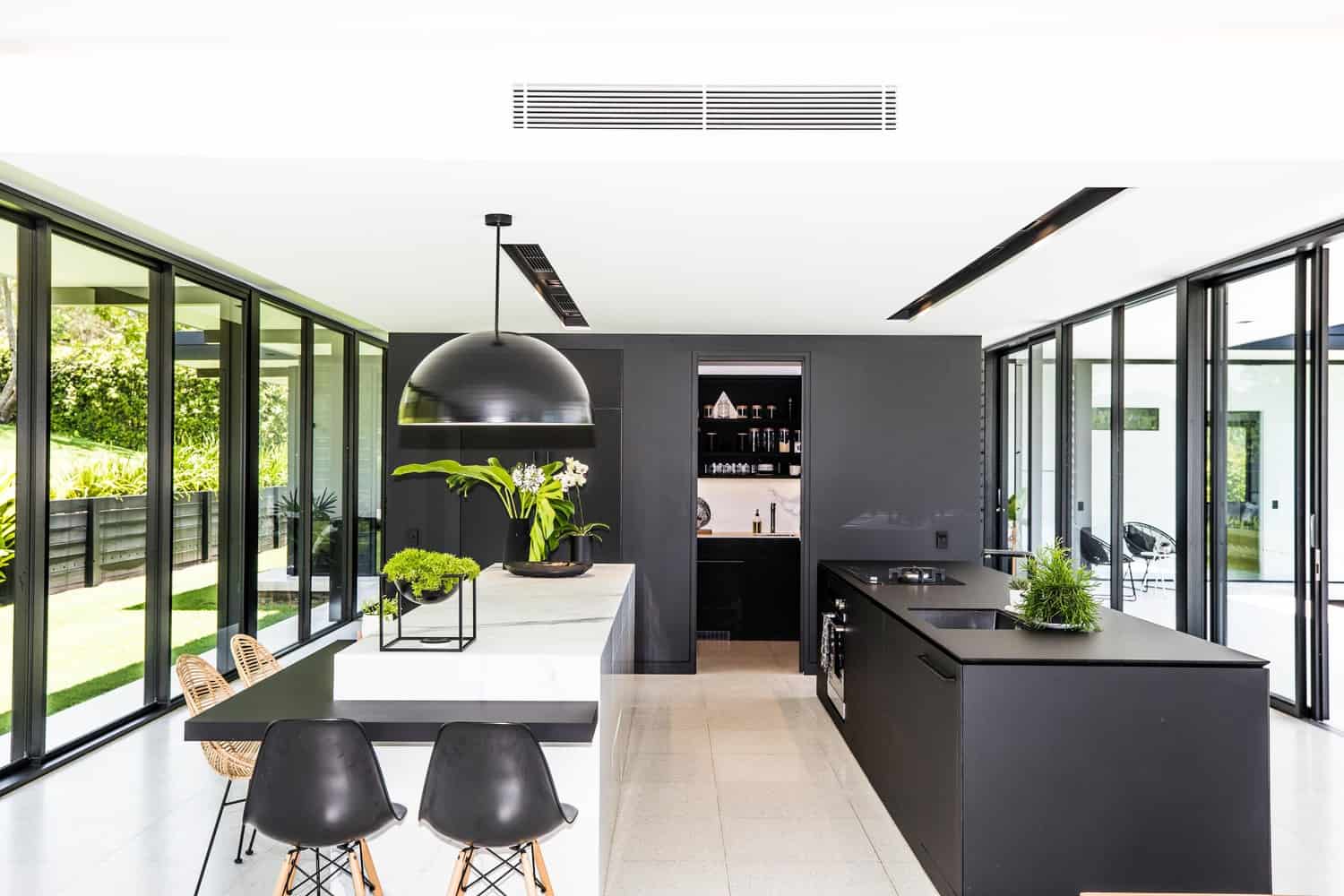 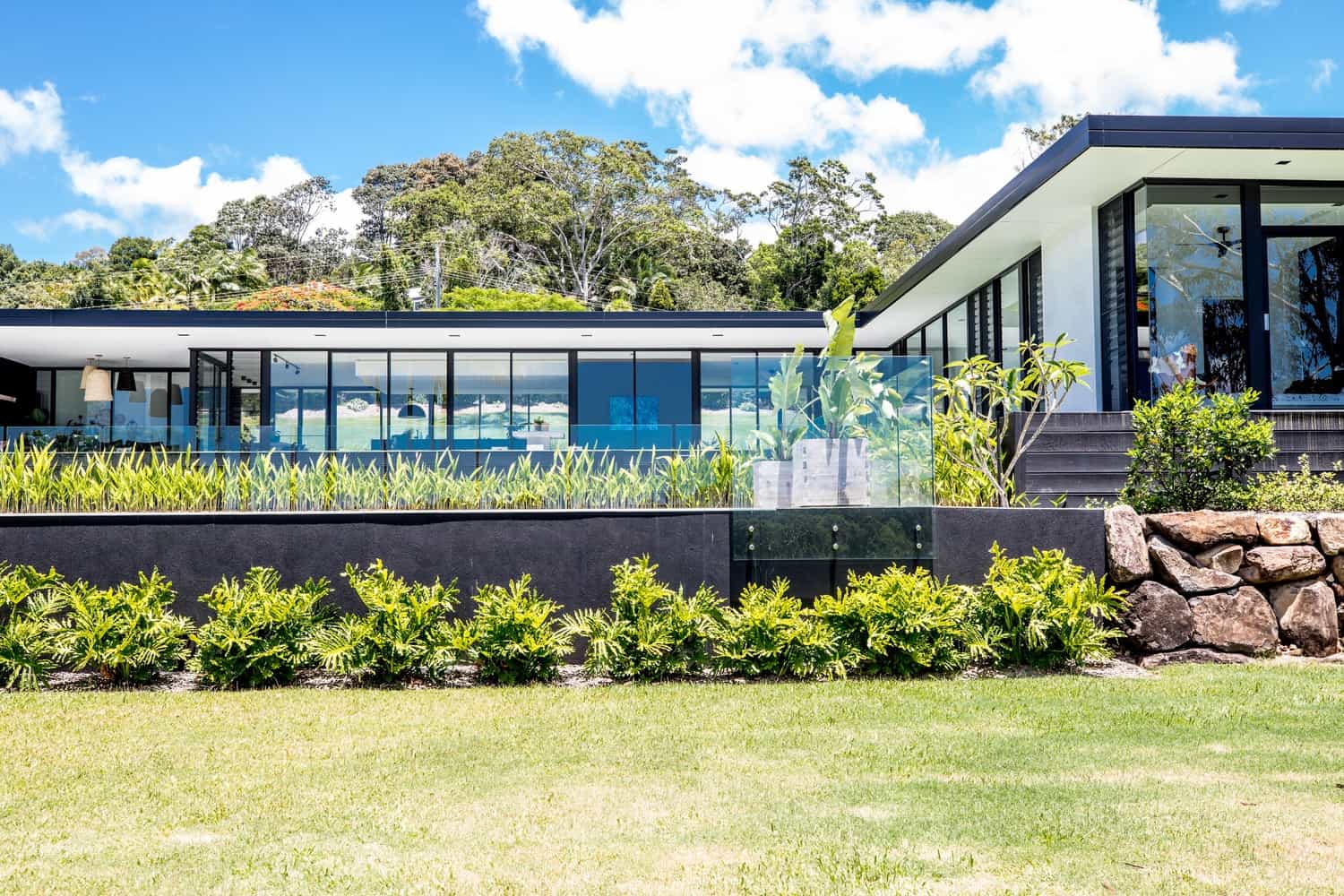 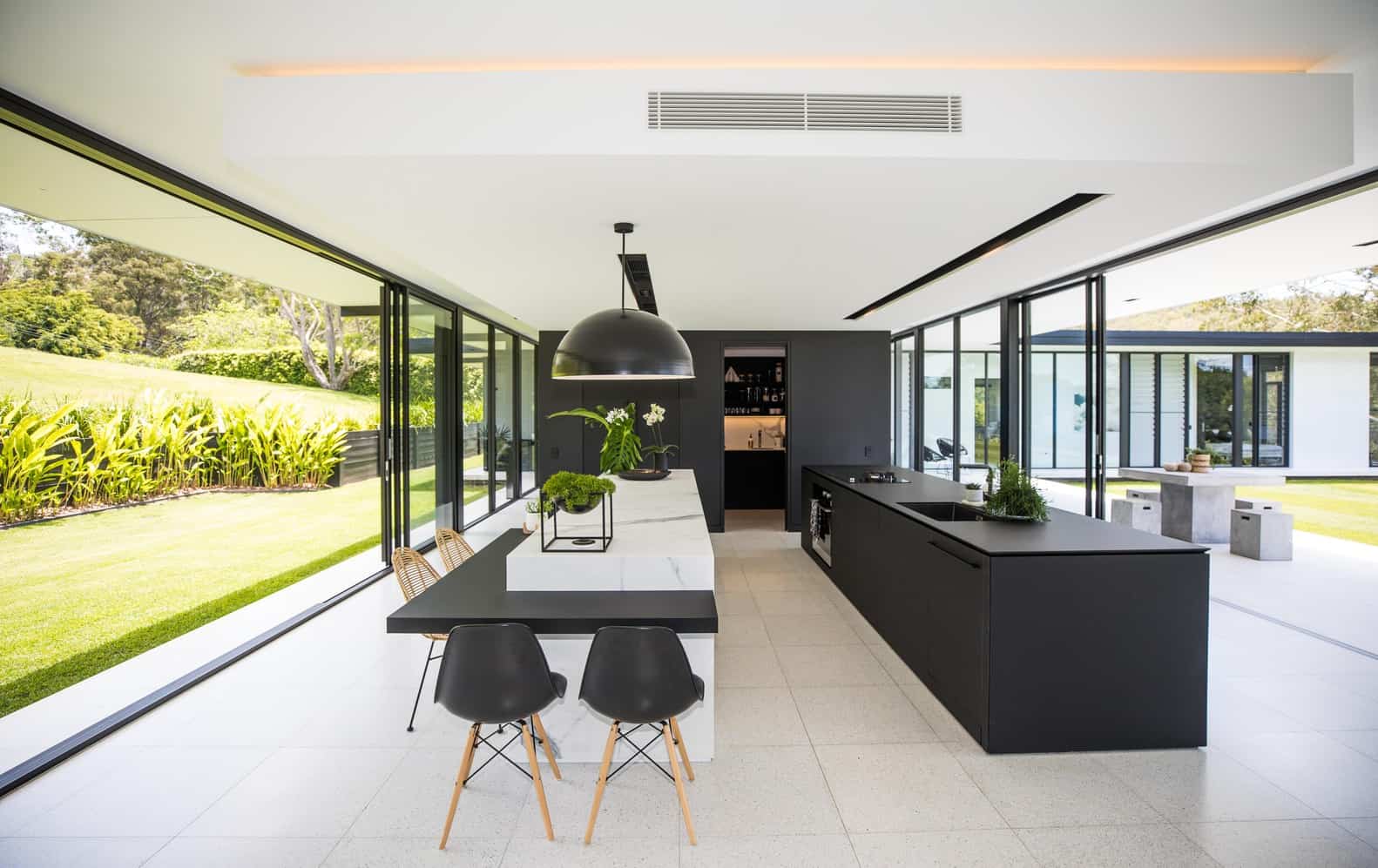 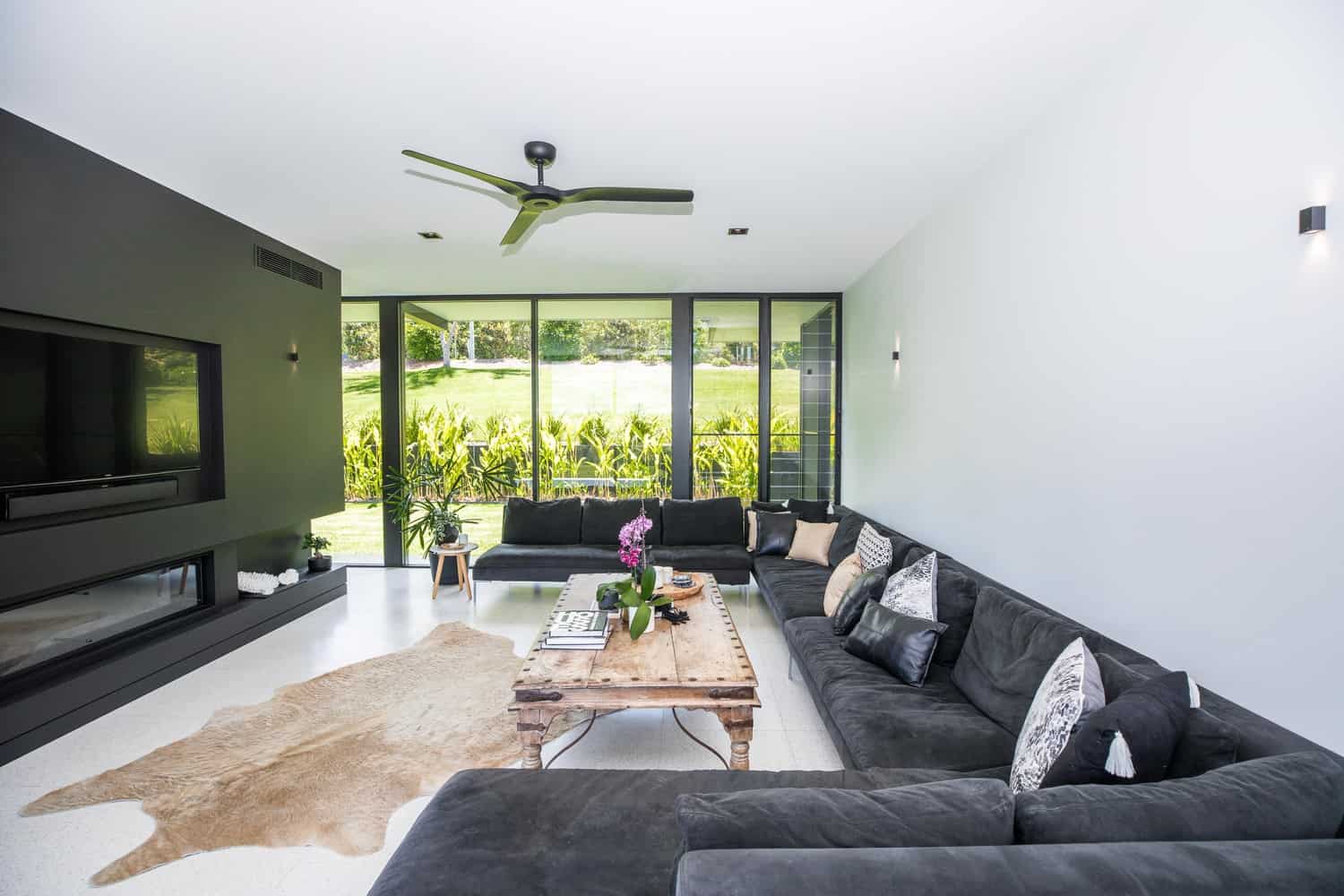 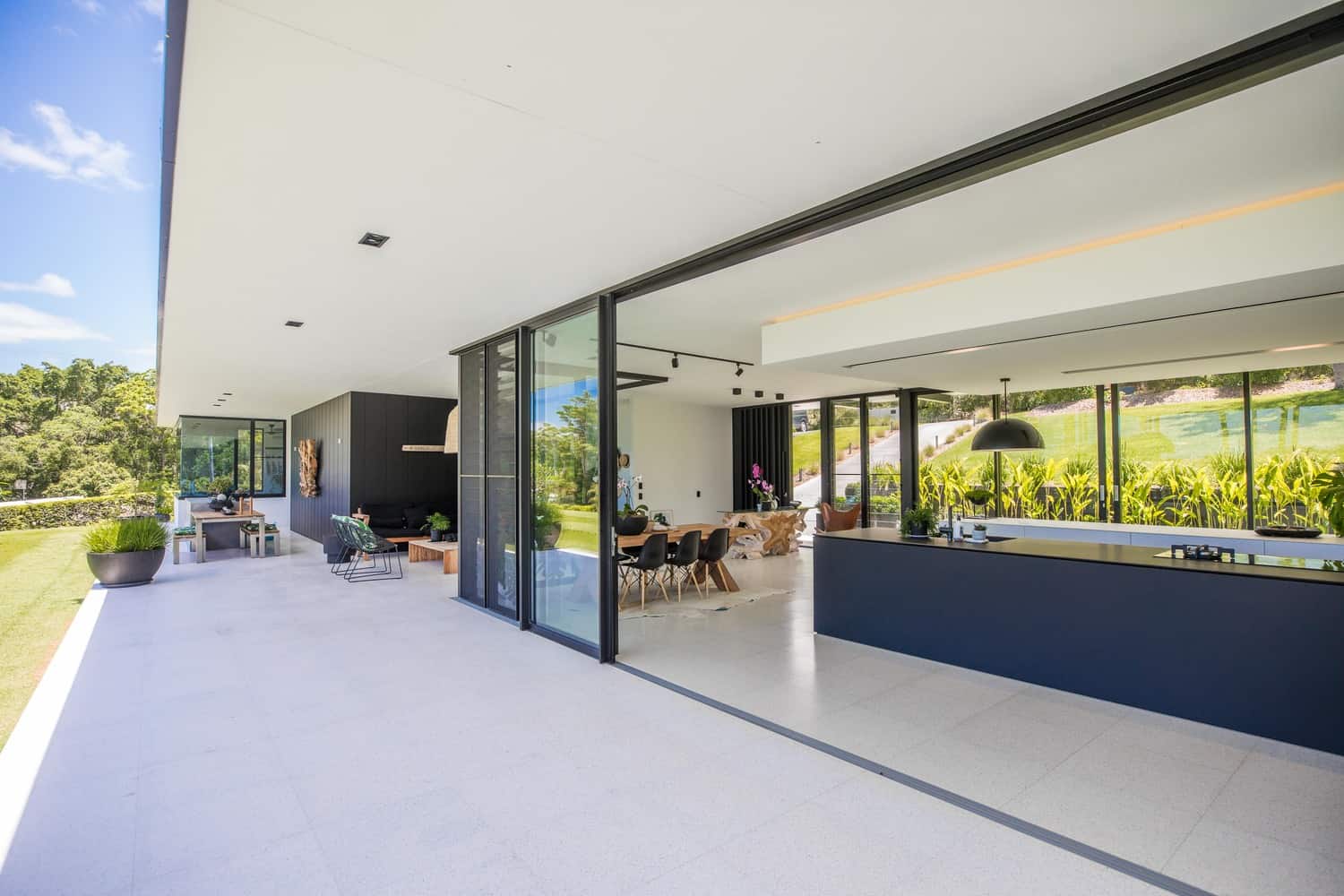 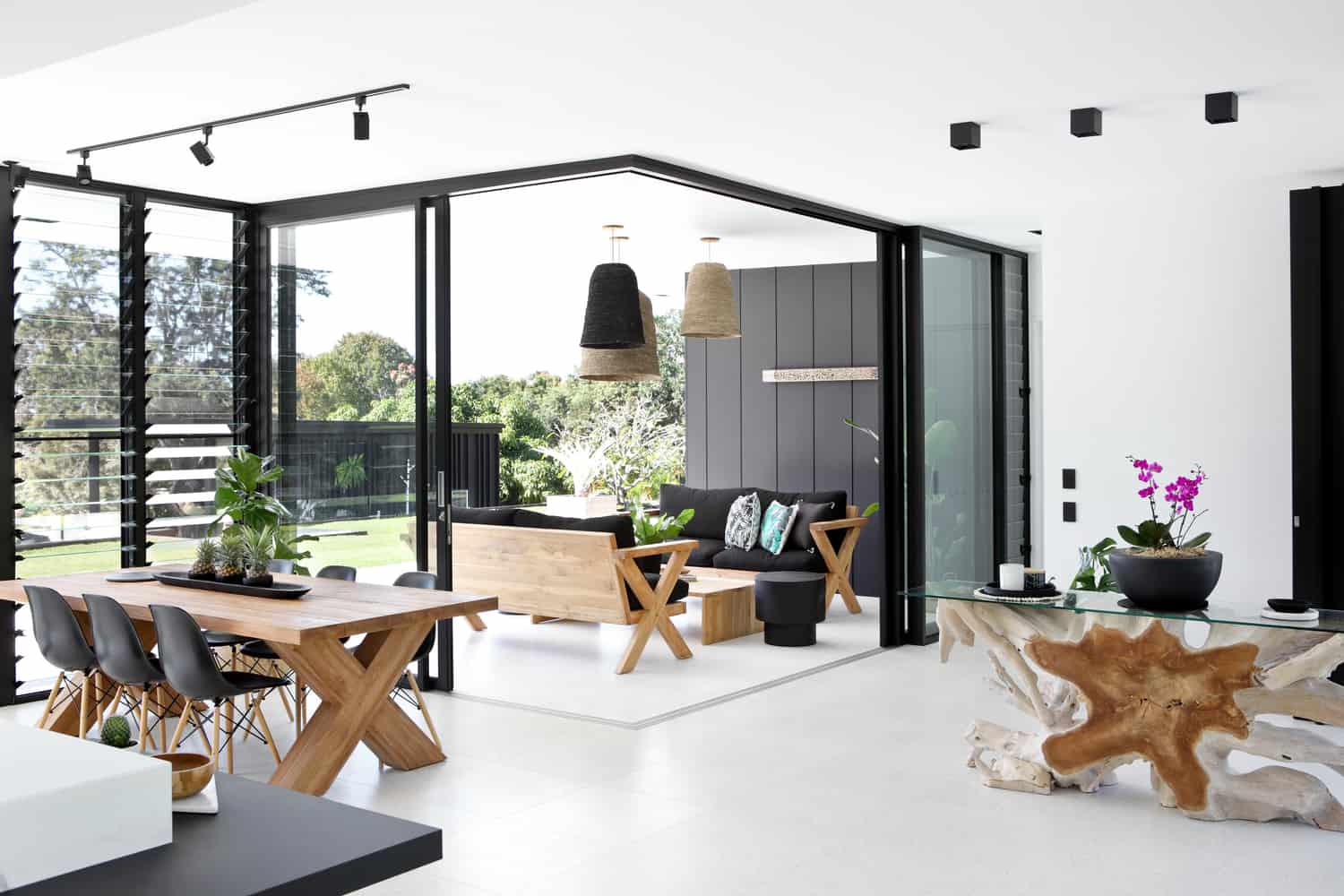 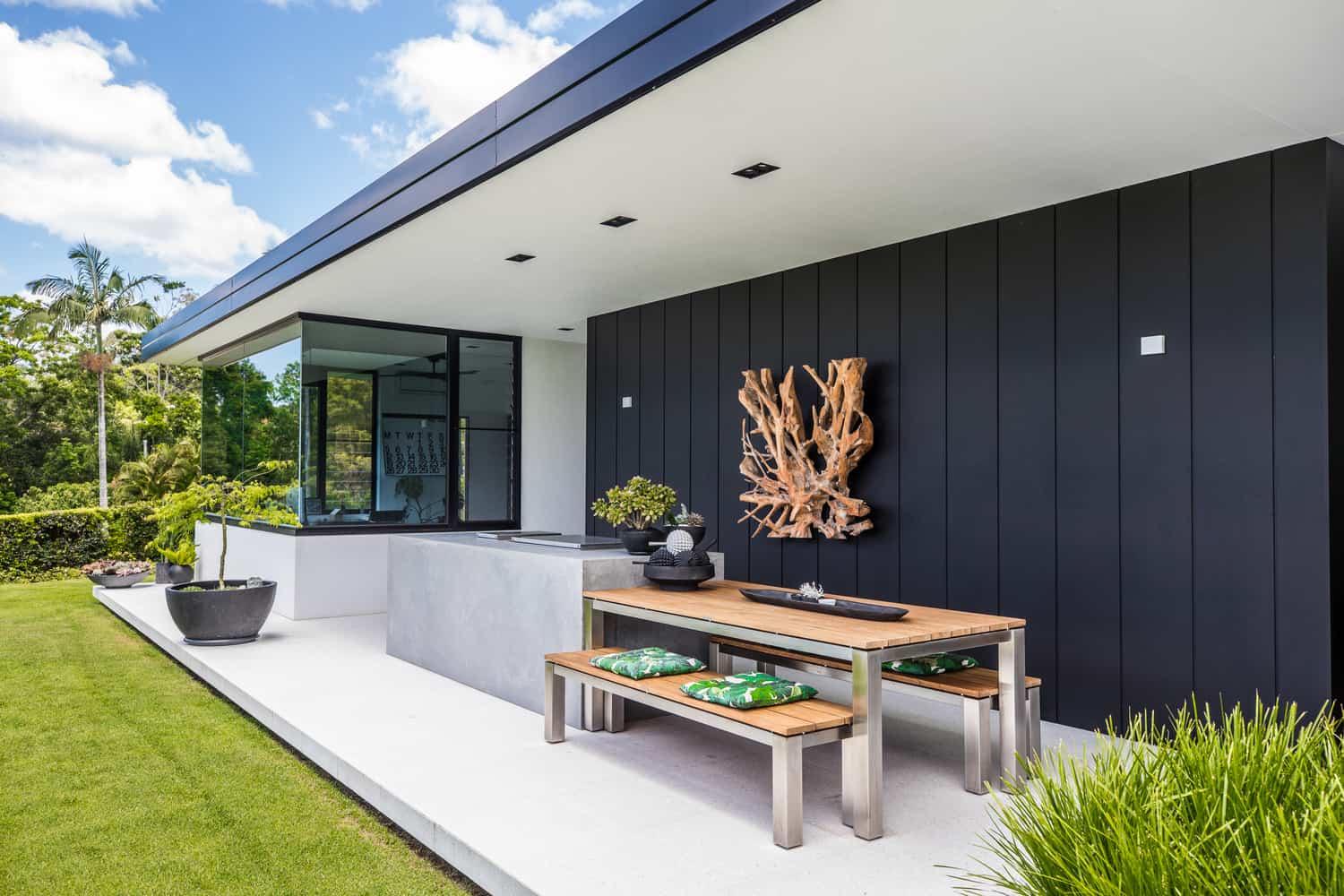 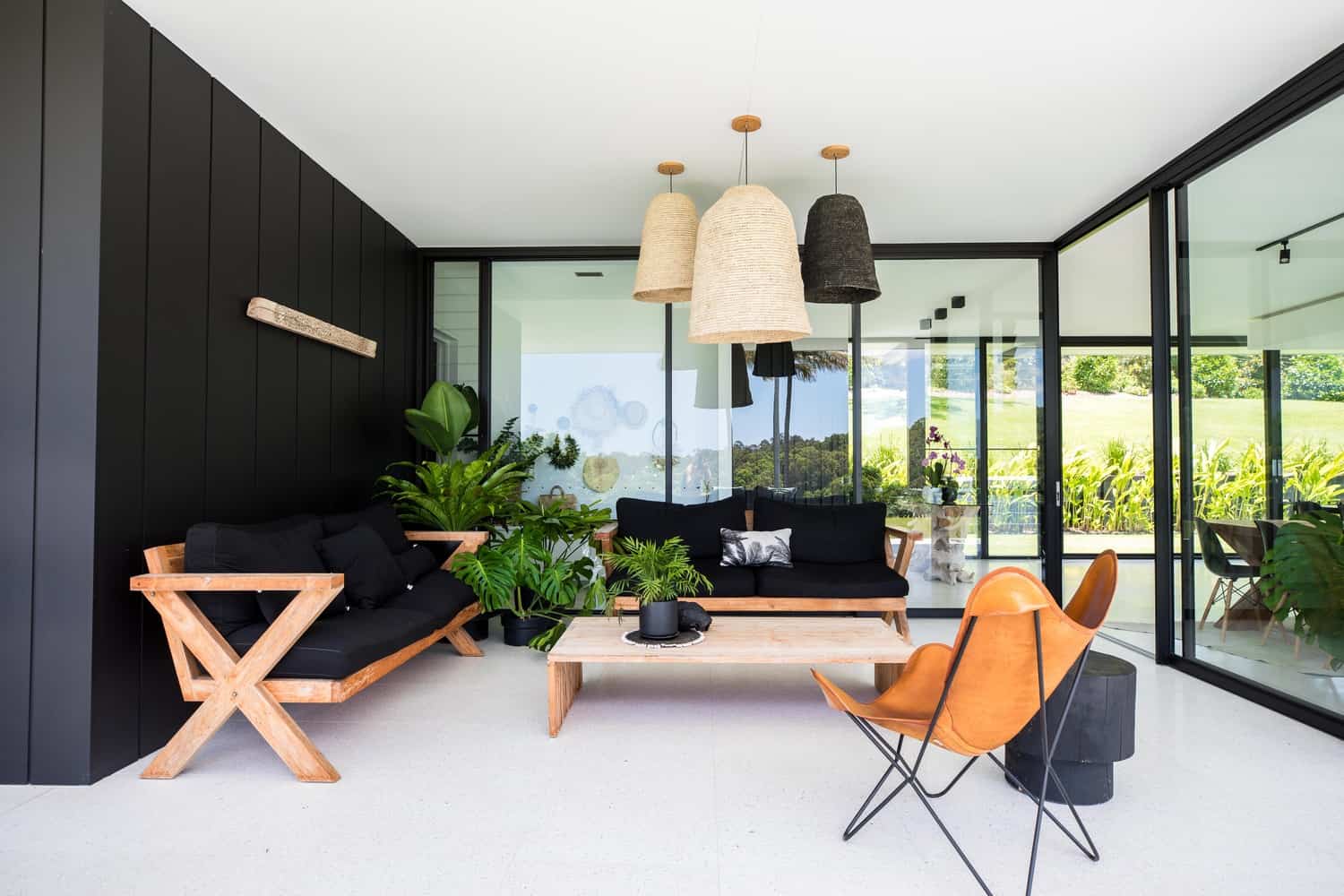 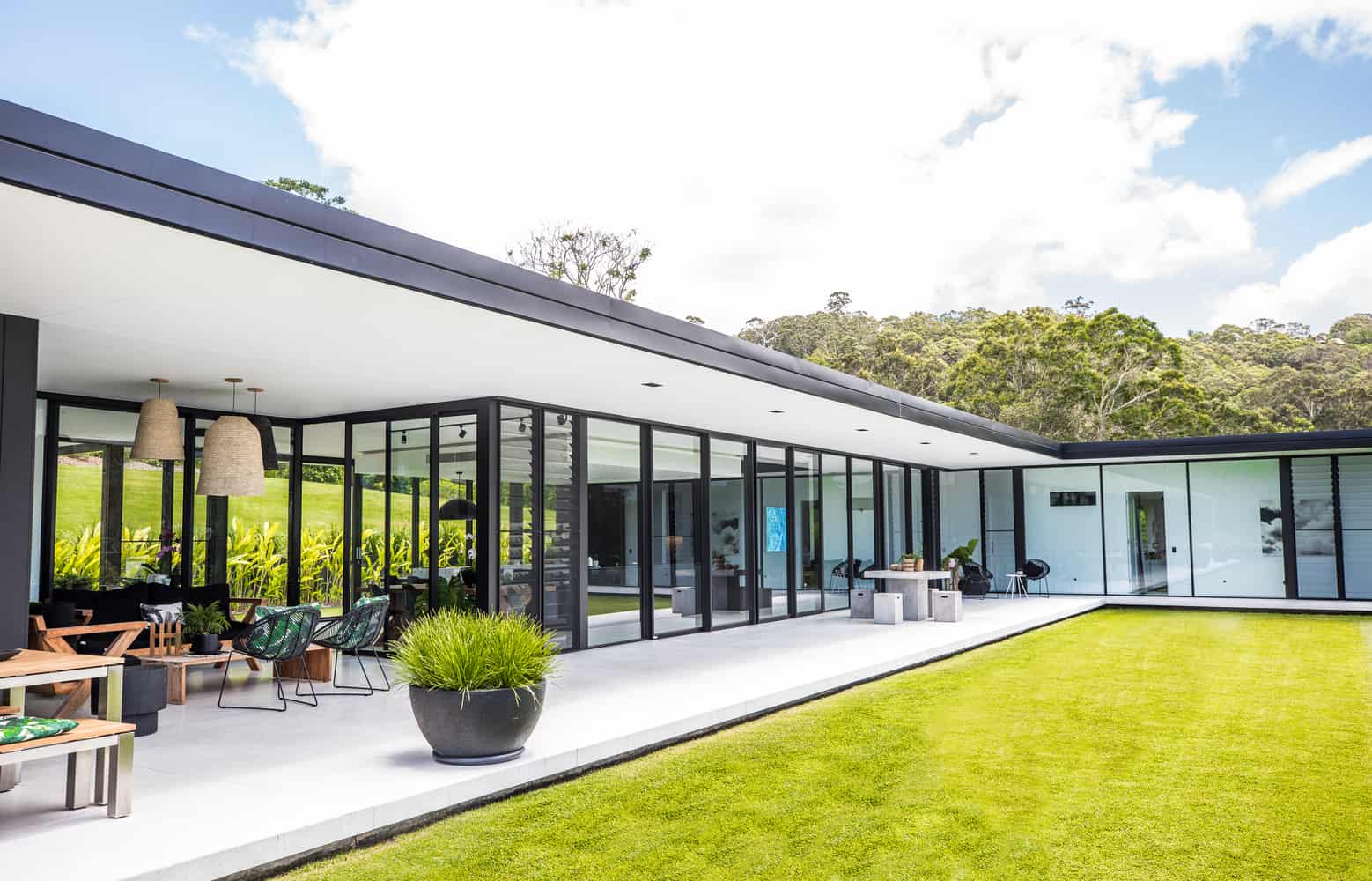 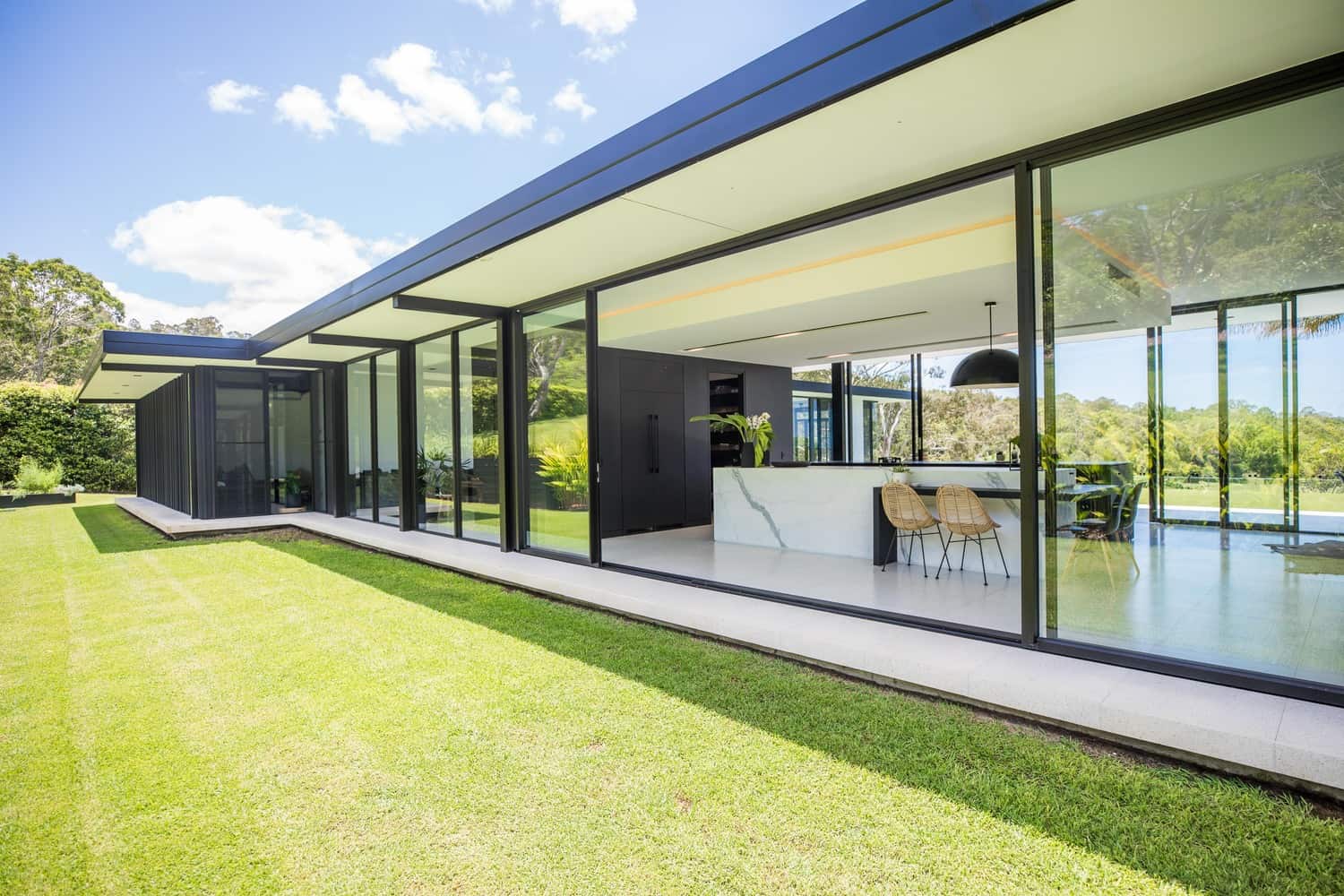 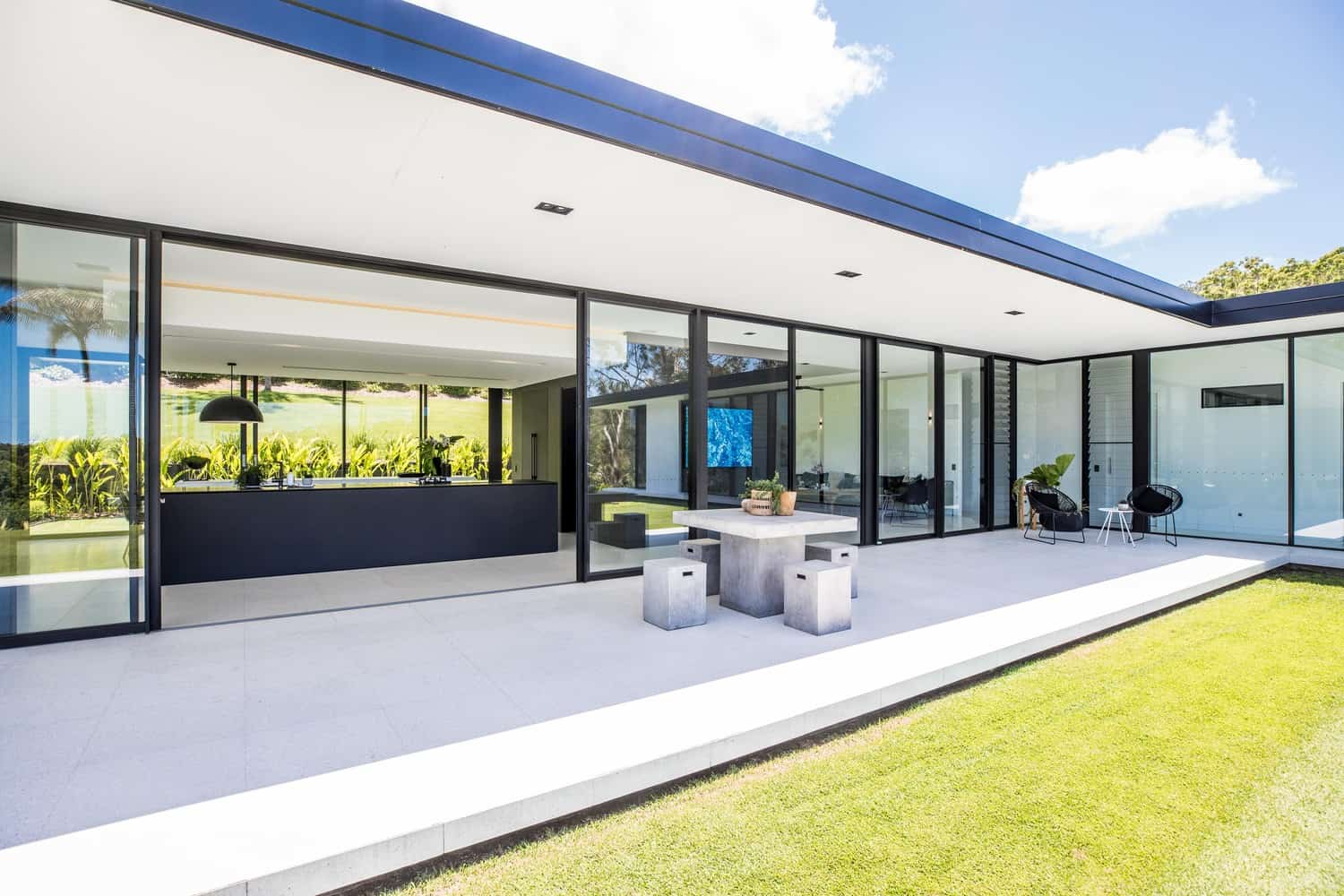 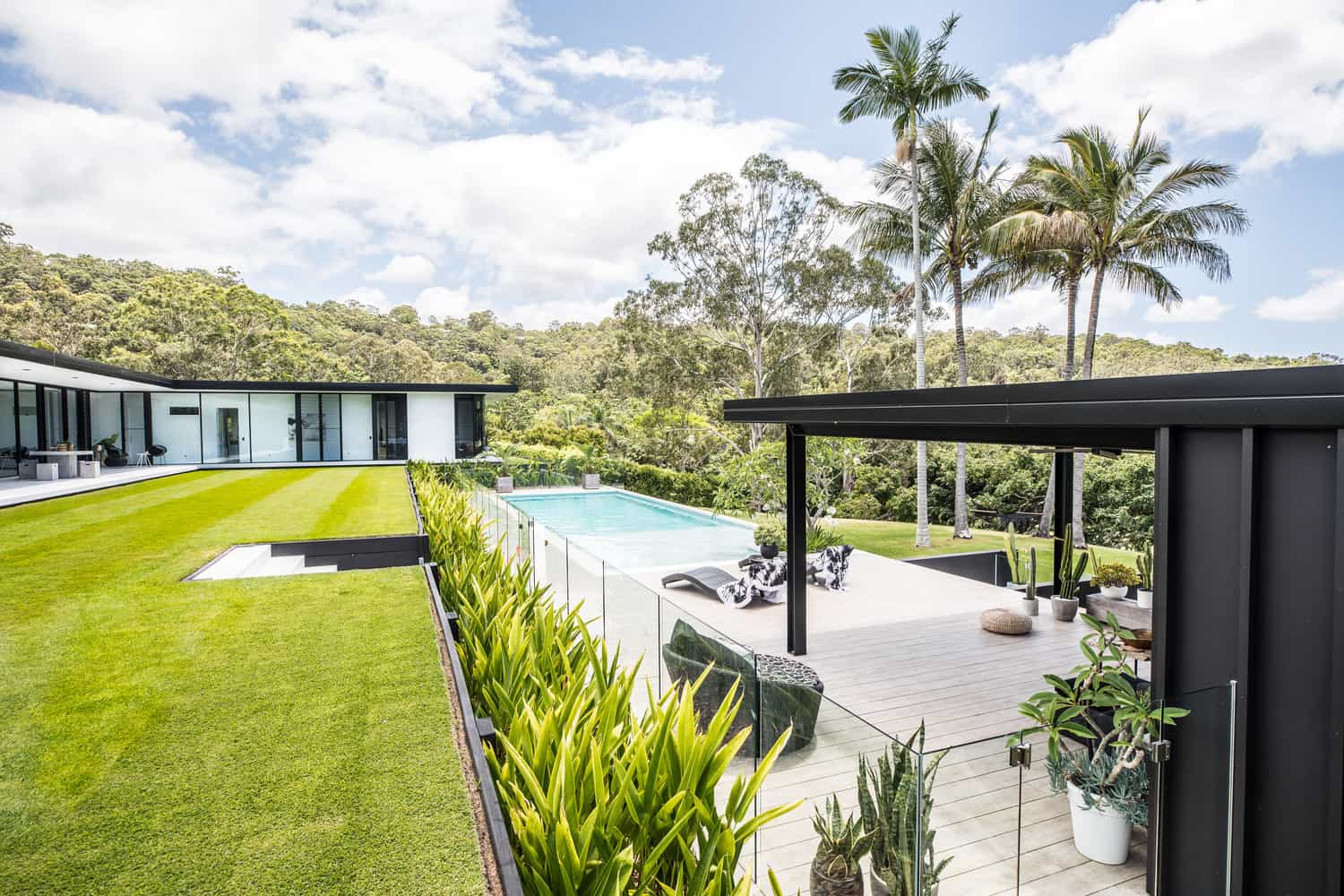 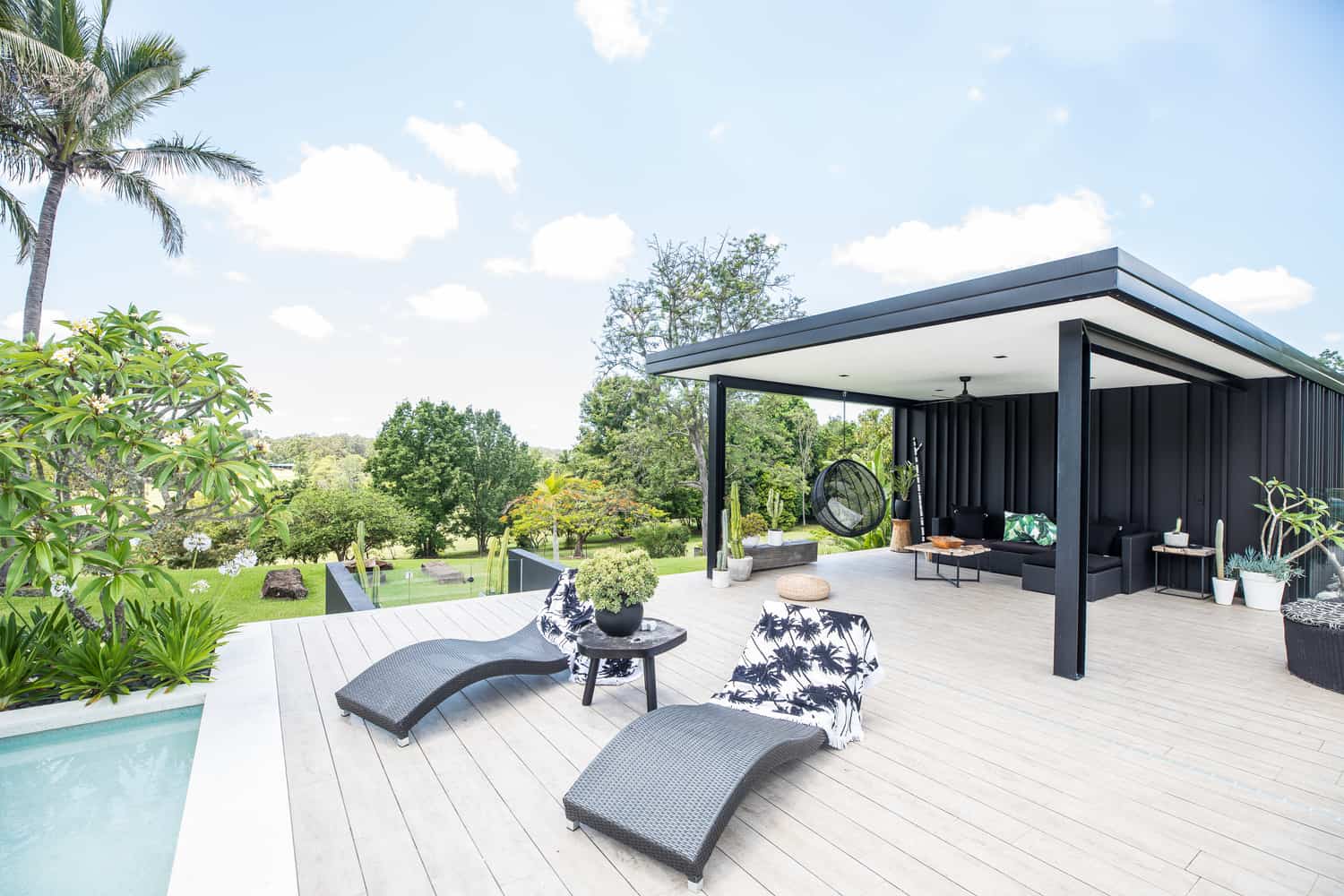 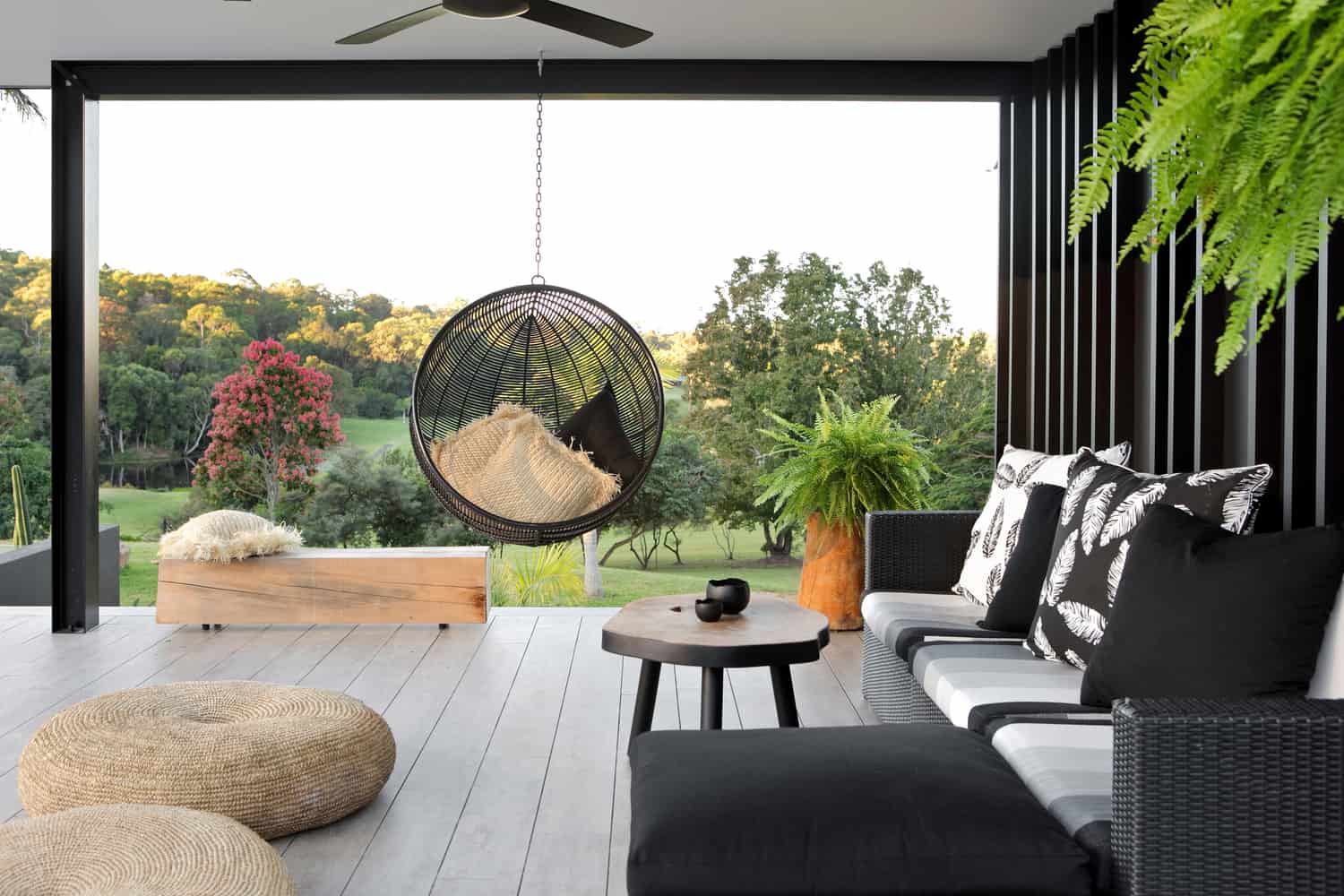 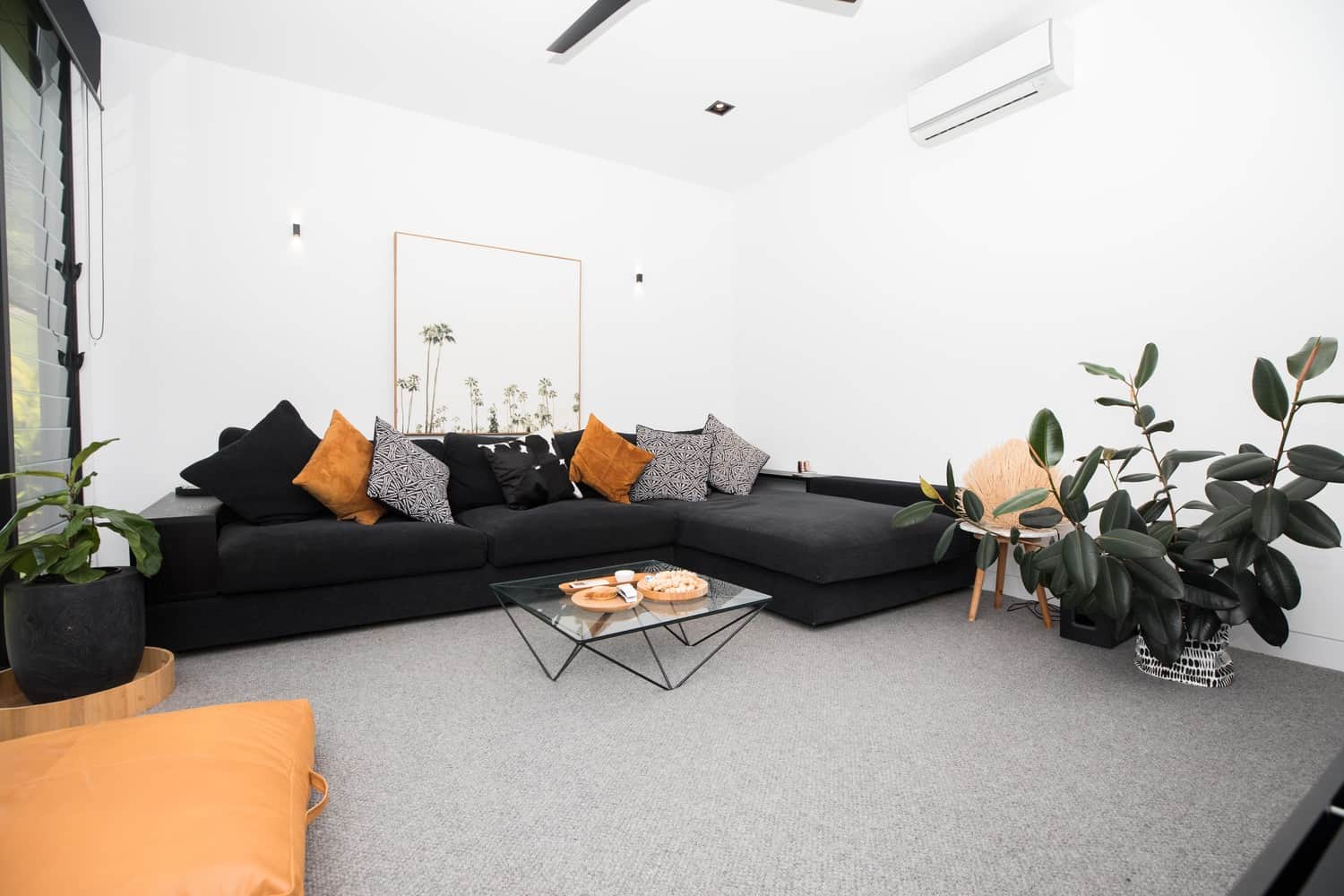 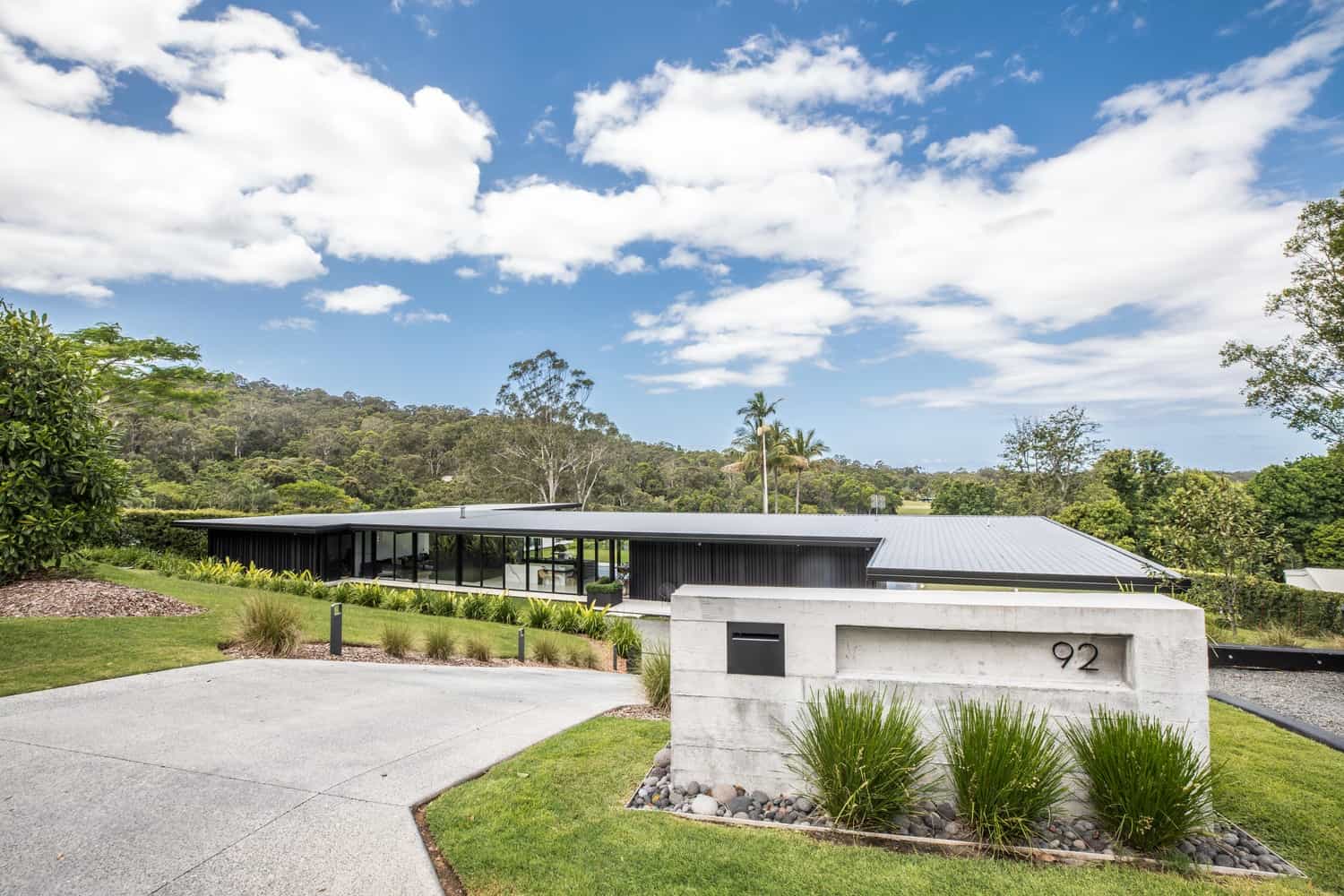 Named for the city in which it was built, the Doonan Glasshouse of Doonan, Australia was created by Sara Waller Design as the lead architect’s very own dream getaway and private residence.

Within her personal design, Waller adopted an explicit “less is more” approach to the structure and details alike. The home features a floating terrazzo slab, a healthy helping of floor to ceiling glass walling, and a nearly flat roof. These features, along with an almost minimalist decor scheme, give the entire space a feeling that is modern, linear, and simple while still feeling elegant and welcoming.

The basic concept of the design was originally inspired by mid-century houses and their typical decor, structure, and furnishing styles. The aim here was to create a timeless piece of architecture that at once hearkens back to those homes of auld while also harnessing a few local elements of the local area and living up to the “glass house” component of its name.

The house sits close to the Sunshine Coast, giving it stunning views all around. To take full advantage of this, designers chose to eliminate distinctions between indoor and outdoor areas as much as humanly possible without sacrificing too much privacy and safety. They wanted spaces to feel open and transparent while letting natural light flood any part of the house that is closed off.

Even those spaces that are physically separated from the outdoor areas are primarily done so by a glass wall. This at least makes those areas feel like they are open to the outside world thanks to good views and free flowing light. This also keeps the home passively heated when the sun goes down and things cool off at night and in the winter season (which is, of course, still quite warm).

The surroundings of the Doonan Glasshouse are nothing short of lush. This is evident from every corner of the house in the wa greenery either physically pours into the room, is purposely featured as a design element, or can at least be seen in abundance through the numerous windows and glass walls. The effect is relaxing and refreshing.

These walls and the flat roof that sits on top of them helps the home appear as if it blends right into its surroundings, making sure it doesn’t interrupt the beautiful natural scenery in which it sits. The only extremely noticeable element is the roof itself which, thanks to the walls again, appears to sort of hover interestingly in the distance, like a natural formation amidst the trees.

On the ground floor, visitors encounter all of the functional and social areas, which have an open layout that is conducive to hosting, socializing, and bonding thanks to free flows of energy and easy movement. Moving upwards, the second story of the house features bedrooms, which appear in an L-shaped volume also made of glass, as thought the private spaces are housed in an ethereal glass box.

Thanks to the lush greenery around the home, however, these bedrooms feel far from lacking in privacy, despite their lack of solid walling. Instead, the tropical climate is welcomed most of the time, while large shades can be pulled down occasionally to provide privacy and block out light if necessary.

In terms of colour scheme throughout the house, most rooms follow suit in that same minimalist line of visuals we mentioned before. Neutral, natural tones adorn most rooms, giving a relaxing and pleasant sense, while black and white features, like benches and chairs, are dotted here and there as contrasting pieces and to ground the palette.

The overall scheme inside the house is quite monochrome, and that’s bolstered by the black facade of the outer structure, which follows suit. creating a sense of cohesiveness. This facade is what provides shade on hot days and gives just the right amount of privacy in any space where the walls aren’t otherwise floor-to-ceiling glass windows.

In tune with the goal of creating a home where one might feel like they’re on holiday all the time, the outer spaces that the home spills into feel somewhat like an impressive 1950s inspired resort. Here, you’ll encounter a Modernist inspired Palm Springs style pool and a relaxing, friendly cabana. The lush, tropical greenery envelops this area like all others, increasing that sense of being on a relaxing holiday, away from the strains of the outside world.

What Kind of Townhouse Does $18 Million Buy in Manhattan?