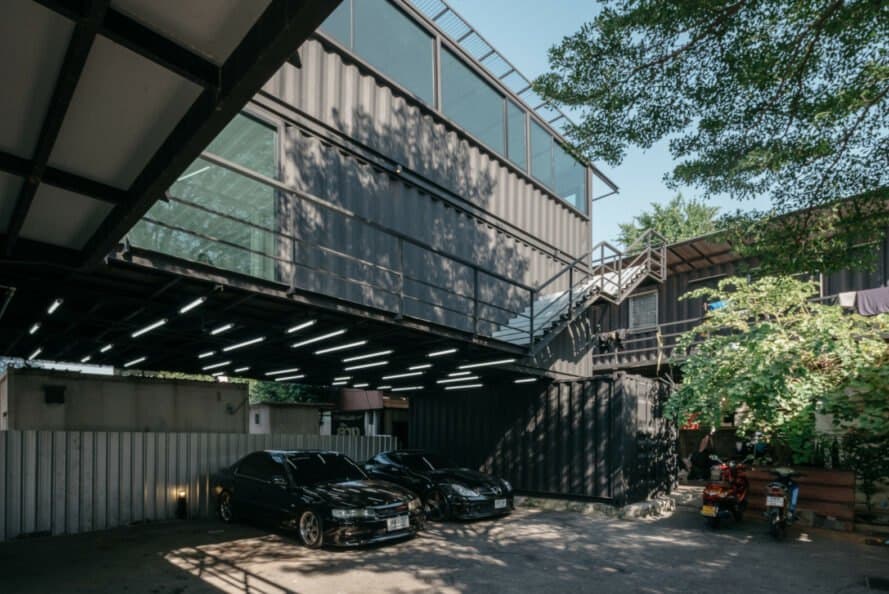 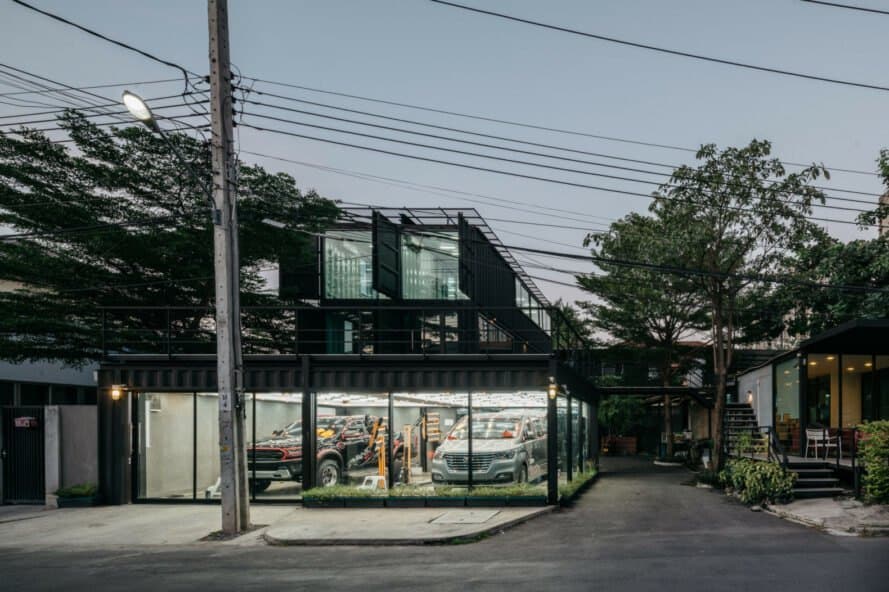 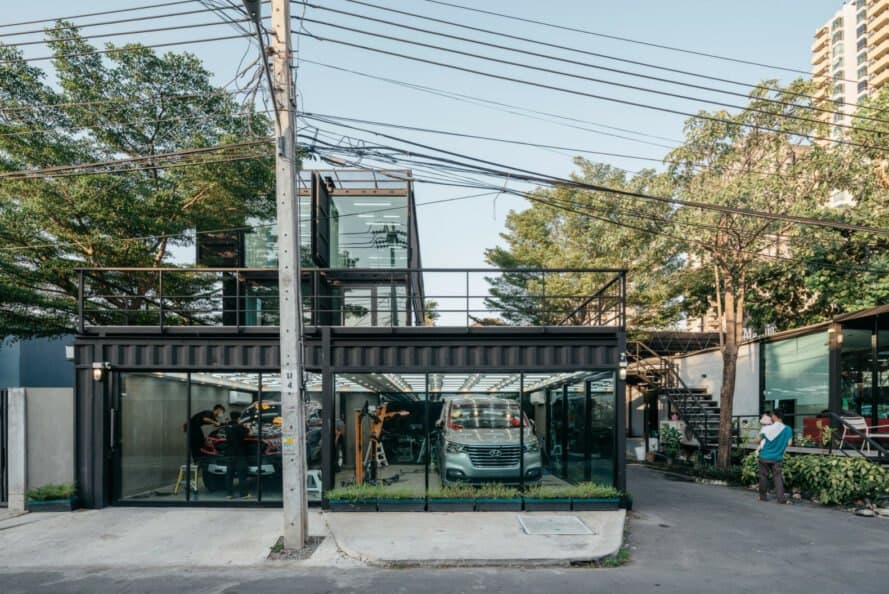 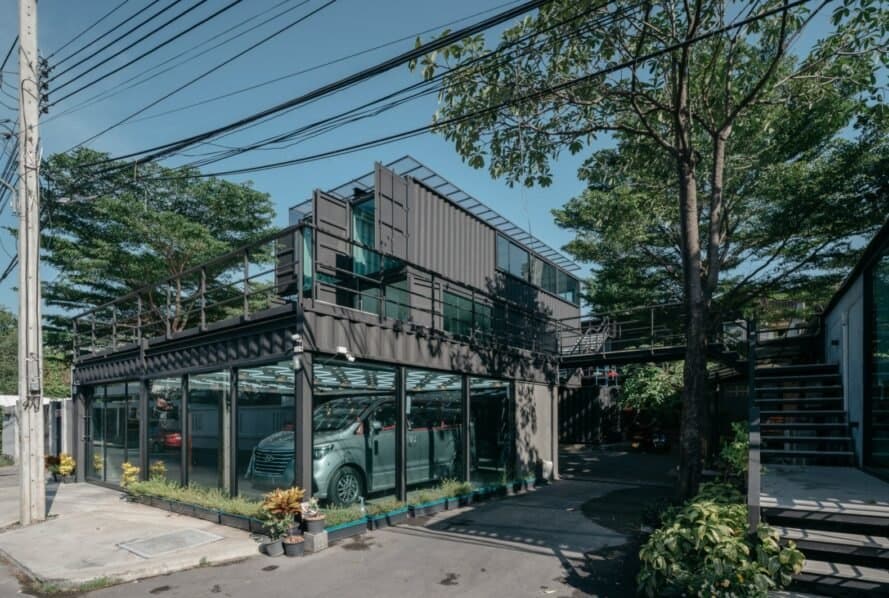 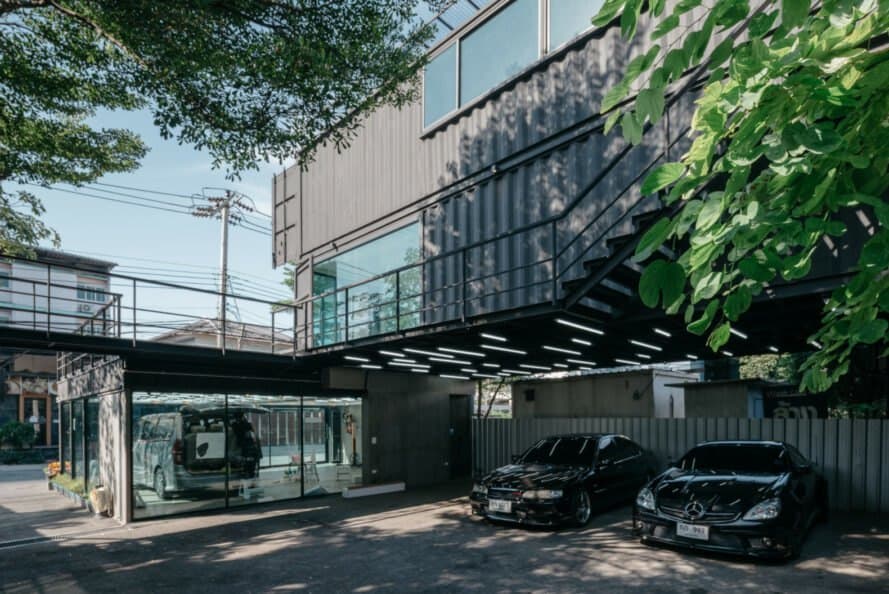 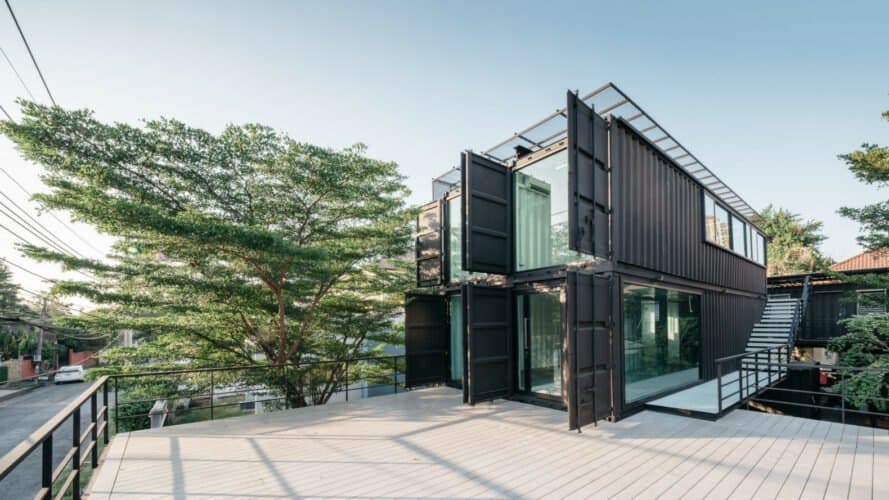 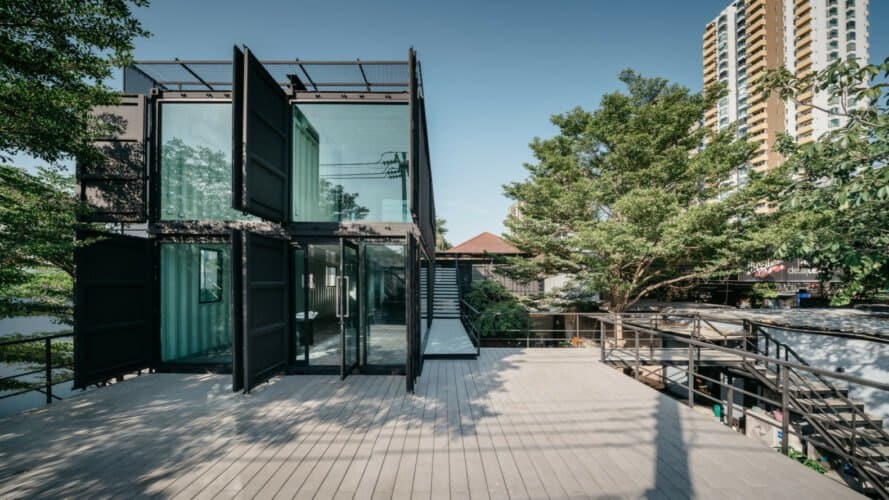 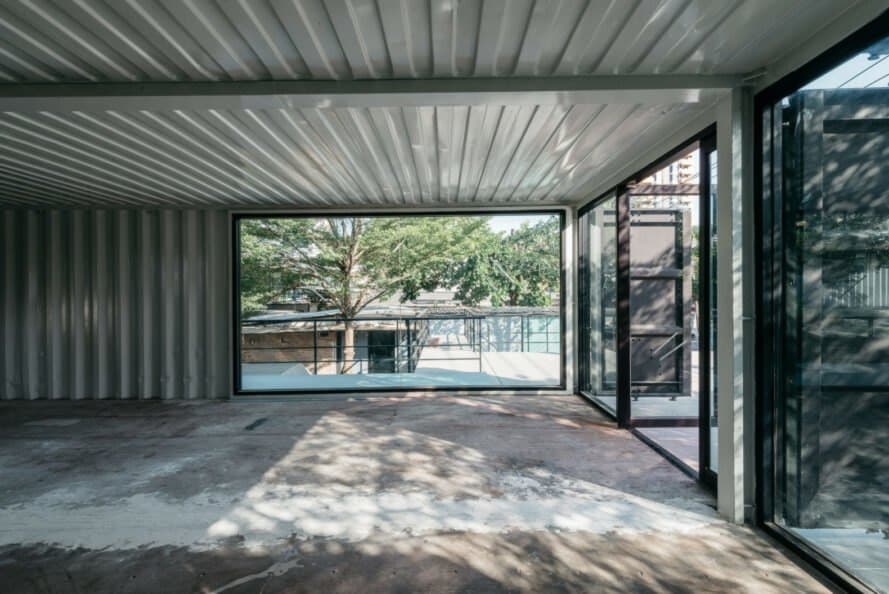 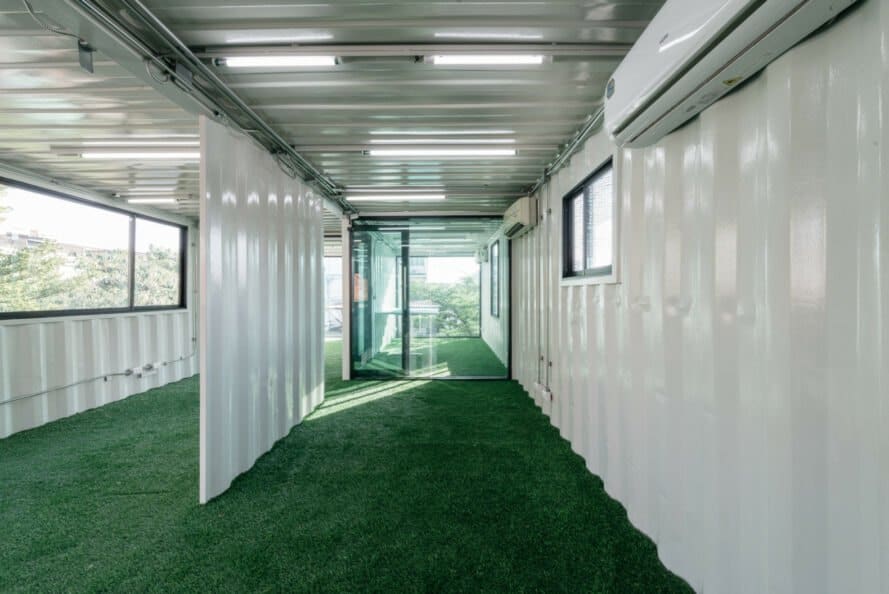 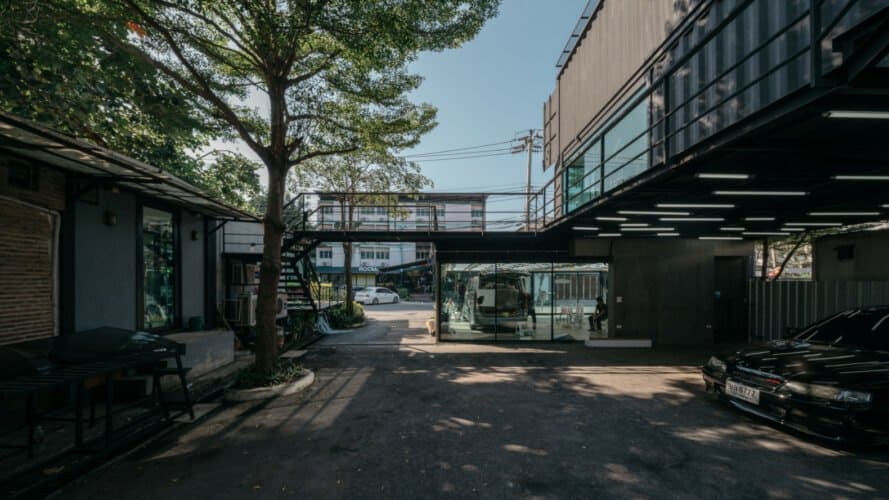 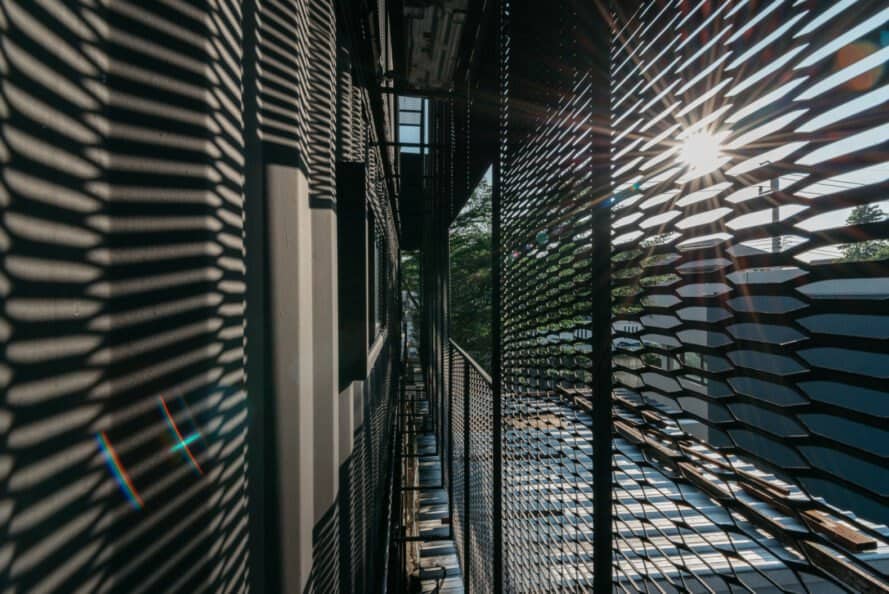 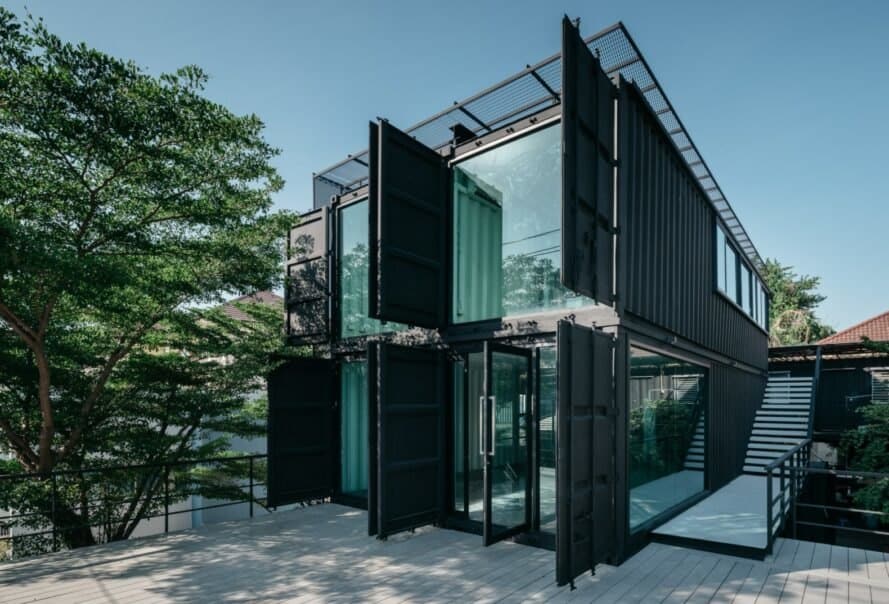 In a suburb of sunny Bangkok in Thailand, innovative designers at Archimontage Design Fields Sophisticated have thought inside the box in order to create a unique parking garage built entirely out of upcycled shipping crates!

In total, the carpark is made of eight very large shipping containers that were deemed too old for their original use. Instead of letting them be thrown out, this company spruced them up, made sure they didn’t bear any weak spots, and transformed them into a building! This building looks shockingly elegant considering its recycled nature, sitting in the centre of the suburb of Nonthaburi.

Within those eight containers we mentioned, the building is made up of two different sizes of container;  four large and four small. The four smaller modules make up the wonderfully bright, light filled front building while the larger ones make up the places to the back and top where cars are stored when they’re parked. The containers are arranged purposefully and strategically to fit effectively into the narrow, compact little corner lot in which they sit.

Originally, this plot was home to another building. This building also featured a car care business but it was simply too old and run down to continue housing the service in a way that gave the owners what they truly needed. Designers immediately began strategizing better ways to organize and take advantage of the 3000 square foot lot, with its unique long and narrow shape.

In order to expand on the space the owners might have available without trying to fill the lot too heavily, designers chose to build things upwards rather than outwards. This is how the stacked looking vertical design that you see in the photos came about. Growing the building to boast three stories provided more flexible, multi-purpose space without cramming too much onto the ground level and overwhelming the look of the street around the structure.

The bottom level of the finished carpark as it is now was designed to let the business it houses grow. The spaces that aren’t currently being used serve well for storage until the owners get back into the swing of things with clients post renovations and overflow of car service moves into that space instead.

On the second floor things are actually entirely open and empty right now, but they won’t stay that way forever. The owners actually have plans for building a restaurant and bar there above the carpark! The third floor is and will remain a lovely, light filled office space with an outdoor staircase that lets visitors access it without crossing the work floor where the cars are serviced.

Speaking of spaces being light filled, the level of natural sunlight was actually a huge priority in this project and partially determined how the shipping containers were arranged! The goal was to create as much window space as possible but, due to the intense Thai heat in the summer, designers still chose to install metal sun shades in certain places so the level of sunlight can be reduced when necessary in order to avoid overheating.

The final touch on the building’s completion was to paint the exterior in as aesthetically pleasing but subtle matte black. This helped the building itself blend into the urban landscape around it while also reducing solar radiation. To contrast this and keep things from feeling too dark and closed off, the carpark’s interiors all remain a clean, bright white that looks very modern and impressive indeed.