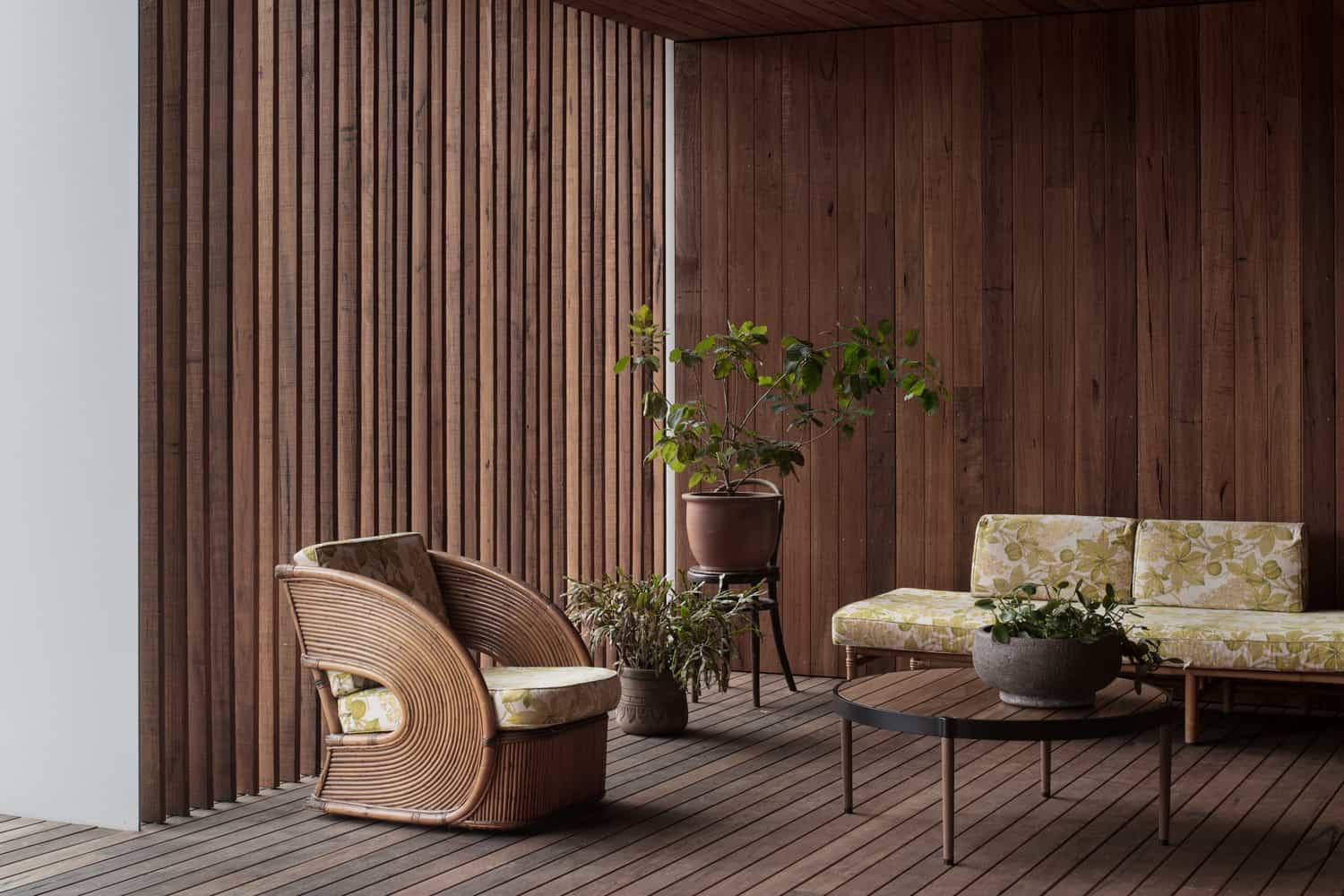 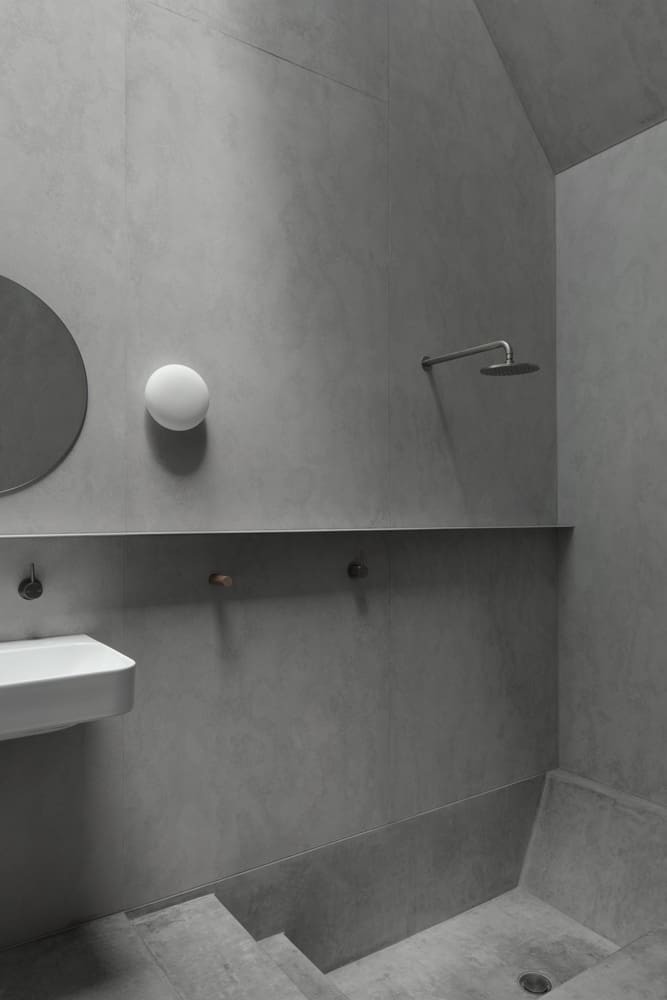 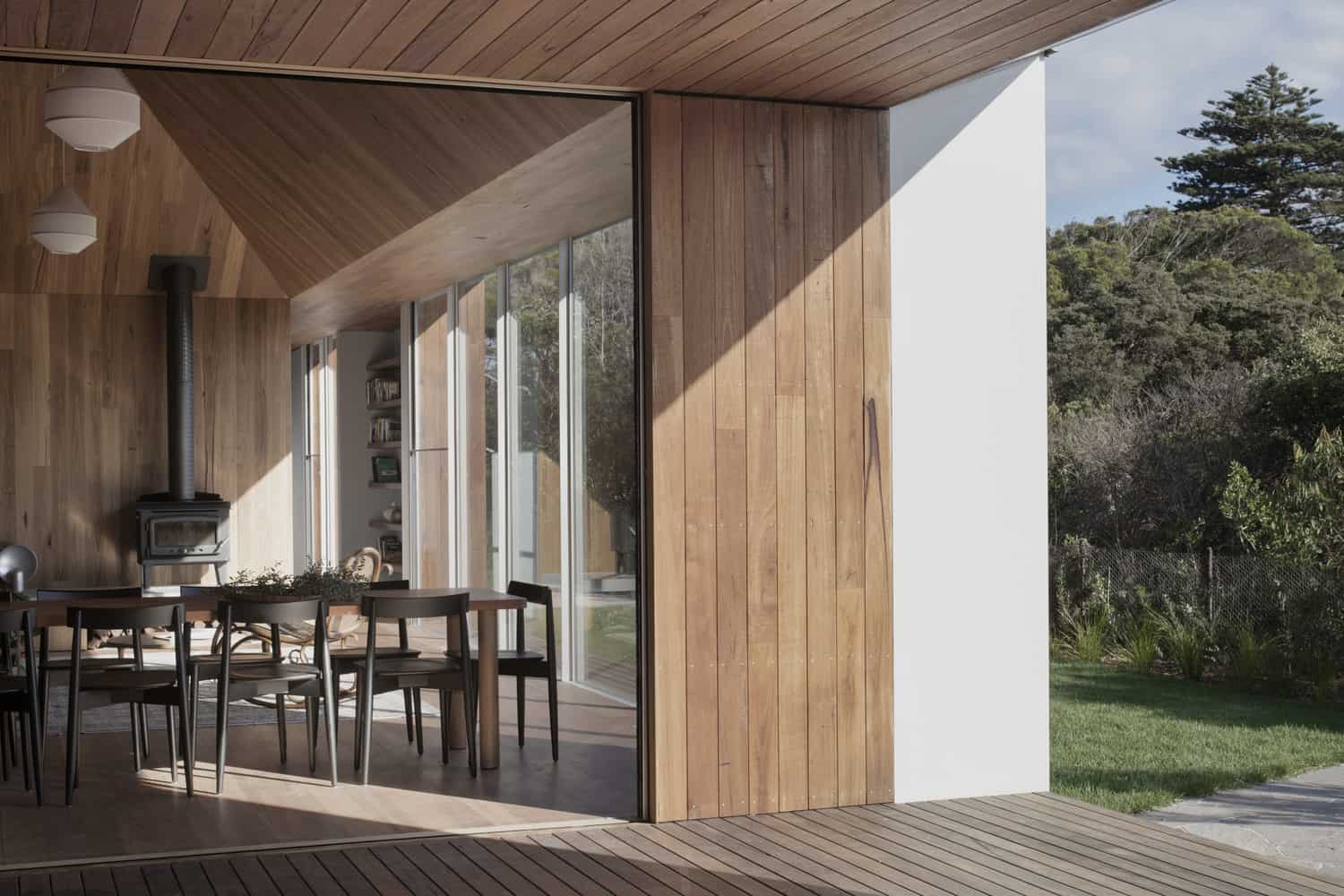 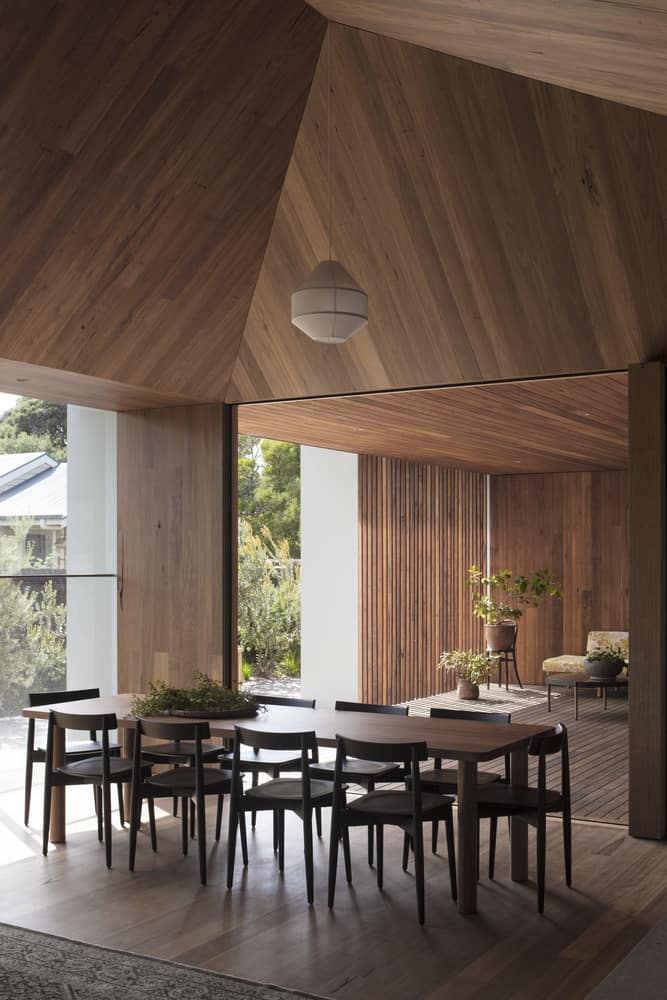 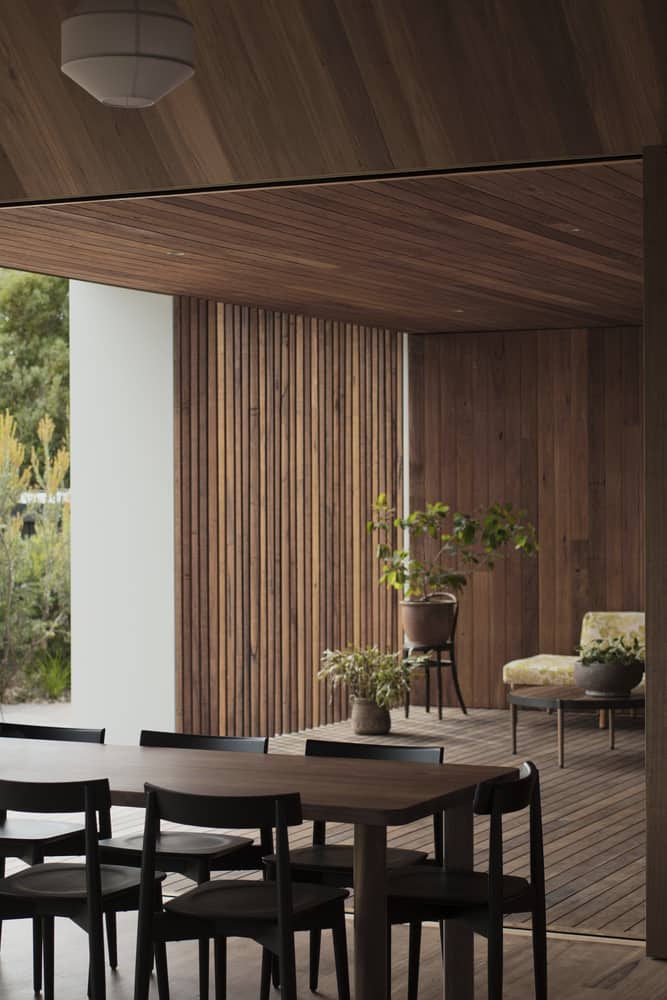 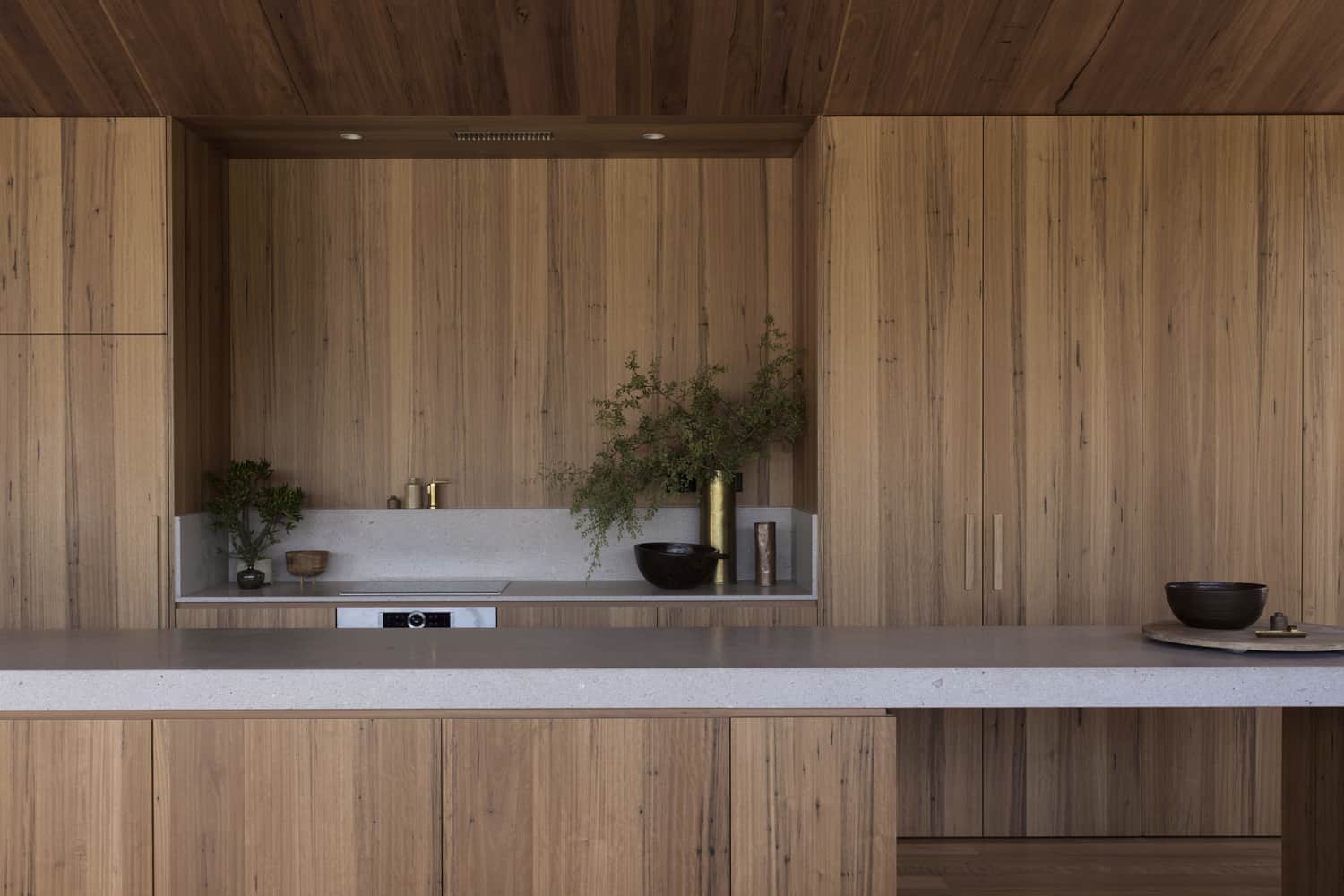 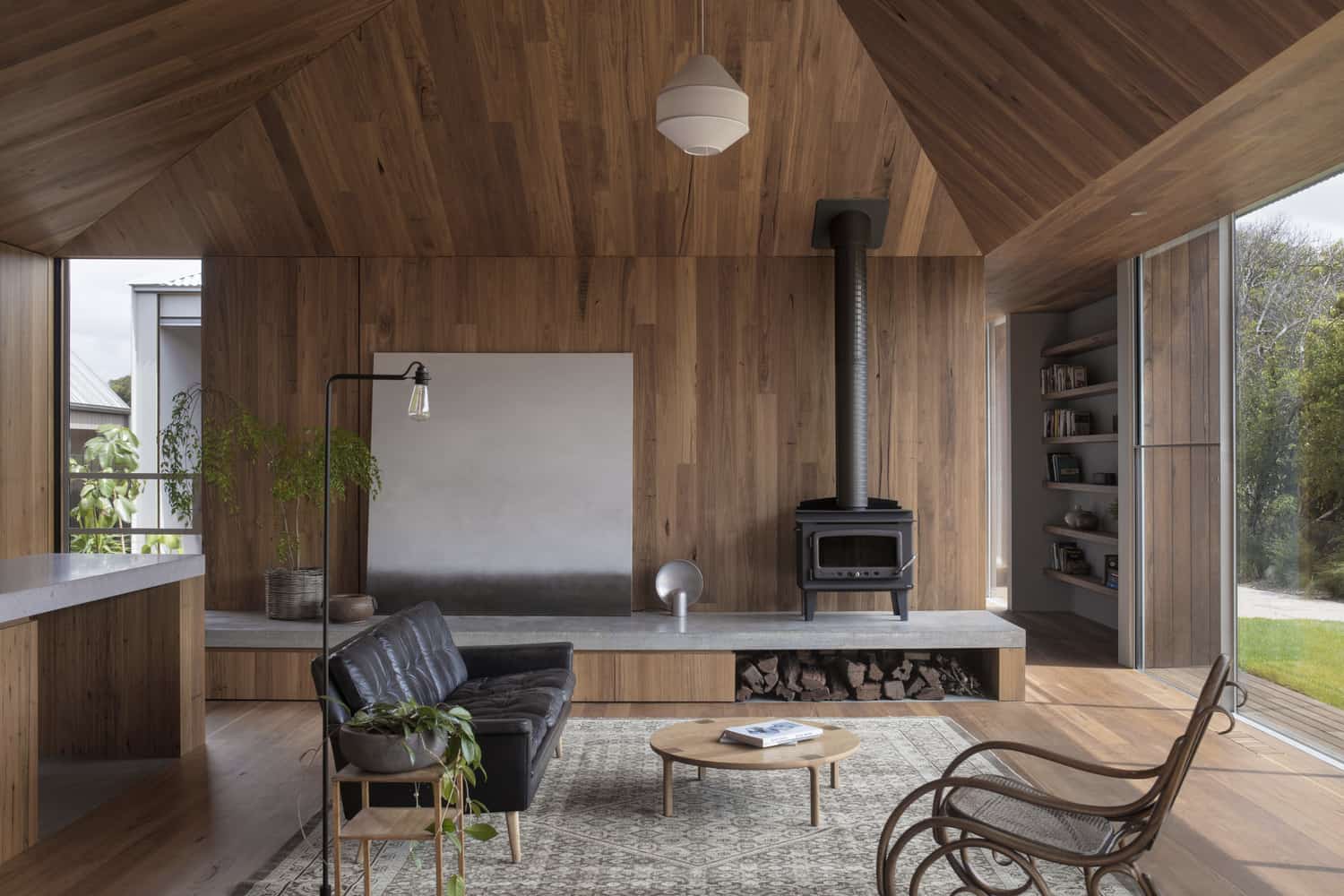 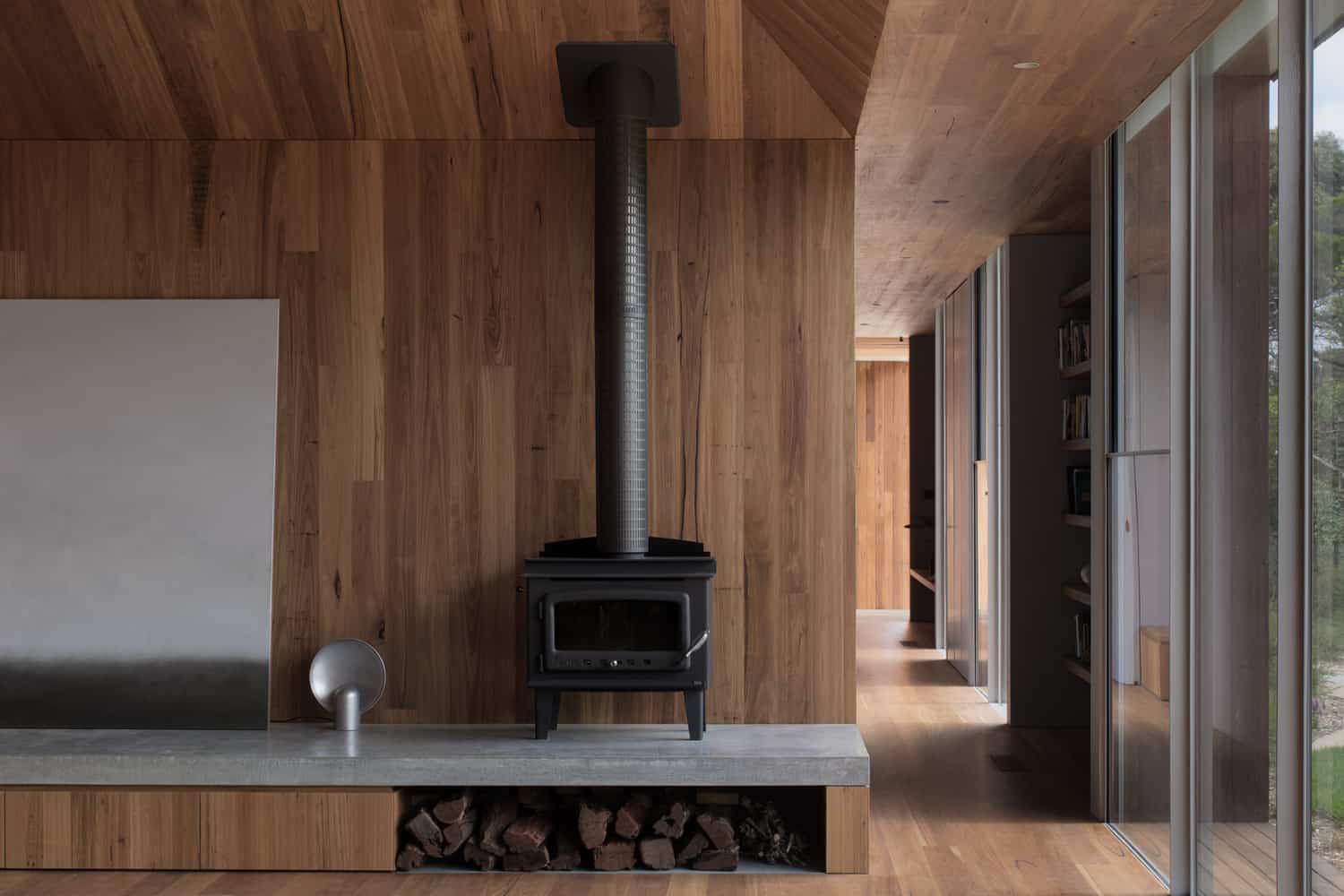 In a sunny neighbourhood, on a quiet street in Point Lonsdale, Australia, design teams at Edition Office have recently completed a beautiful beach house, aptly named Point Lonsdale House. From a distance, Point Lonsdale House looks very linear in its shape and basic structure. Perhaps the most unique aspect of the house is the way designers built it as four distinct pavilions that are all interlinked, making them simple to move between but clear and organized in overall layout.

Each pavilion is clearly defined by its own vaulted roof, each one sitting at a jaunty angle that at once keeps the attention of onlookers but also suits the natural ebb and flow of the land the house sits on. These roofs mark out the different parts of the home, each of which has a separate function of its own.

The site upon which the house sits allotted a space for it that runs east-west. The front of the house runs along and sits close to the property’s southern border in order to leave space behind for the enjoyment of the long, lush gardens that sit towards the north side. Each of the four pavilions that make up the larger house features its own in a series of private courtyards.

In these courtyards, visitors find smaller gardens and decks designed for outdoor relaxation and escape. Each of these decks is part of an extensive relationship that the house has with blended outdoor spaces; designers intentionally built several different access points to the beautiful outside environment from each pavilion, making the beach-y outdoors easily accessible at all times no matter where you are in the building.

When the beach house was first conceptualized, designers pictured it as an island in the midst of their chosen coastal landscape. From a distance, it does, indeed, look a bit like its own floating piece, elevated above most other houses in the area. Part of the house is cantilevered slightly over the ground in an effort to level out the terrain while doing minimal damage to the natural area.

Although building teams avoided clearing the local land in order to build the home, previous loss of brush and plants from weather and other changes to the area took place in a small, non-permanent way. As such, designers created the home with the expectation that, in coming years, the natural gardens from outside the plot will grow back up to its perimeter and blend visually with the gardens that belong to the actual home.

The house itself, which appears slender thanks to the way the four pavilions are situated along the linear plot, looks monolithic on first view. The use of rough timber establishes a particular aesthetic suitable to a beach house. While viewers from the street can certainly get a sense of the home’s style from the street, most of the dynamic spaces that are used by the family living there now sit amongst the gardens towards the back of the plot, hidden from view by the angled roofs we mentioned previously.

The house boasts two separate sleeping zones, each slightly removed towards the calming gardens at the back in order to establish them as places of respite. These two zones are linked by a central common area that draws owners and any overnight guests visiting into a more public living space together towards the beginning and end of each day.

This common living space is entirely covered in timber boards, continuing that monolithic sense from the exterior of the home right on inside the doors. The central placement of this room serves to spatially define the different functions of the building, besides just facilitating bonding with family and friends, helping the space make sense.

Rather than having its own deck and courtyard, like the rooms in the two sleeping zones do, the living room joins seamlessly directly into the wider back gardens through sliding glass patio doors. From there, the heart of the house has easy access to the coastal scrub and wider landscape beyond the home’s own lawn.

On the other side of the central room is another outdoor space, but one that is much different. Rather than leading straight into the gardens and greenery, the longest timber wall on the western end of the room opens right up, thanks to a pivoting wall panel, into an actual outdoor living space that’s more like an open air room than just a patio or deck.

Designers organized this space to intentionally feel like the interior of the house is spilling right out into the sunshine and towards the beach in a way that’s free flowing and informal. The aesthetic overall, both inside and out, is traditional, rugged, and suitable to a beach house, shedding most of the separations and limitations of urban housing so that it feels almost more like camping out in a tent, despite the fact that it has all the amenities of modern living.

Further down from the outdoor room is another pivoting wall that leads from the common room into a slightly more private deck than the others that sit on the edges of the house. This deck sits between the kitchen and the lounge space, providing owners and visitors with a space for shade and quiet that isn’t visible from elsewhere on the land. Throughout the house, this whole system of decks, patios, and outdoor rooms link up the four pavilions of the building.

Besides just providing great flow of movement physically from room to room, the linking of indoor and outdoor spaces also facilitates good airflow thanks to coastal breezes, as well as great flow of natural sunlight. This actually makes the home more energy efficient, eliminating the need for an air conditioning system.