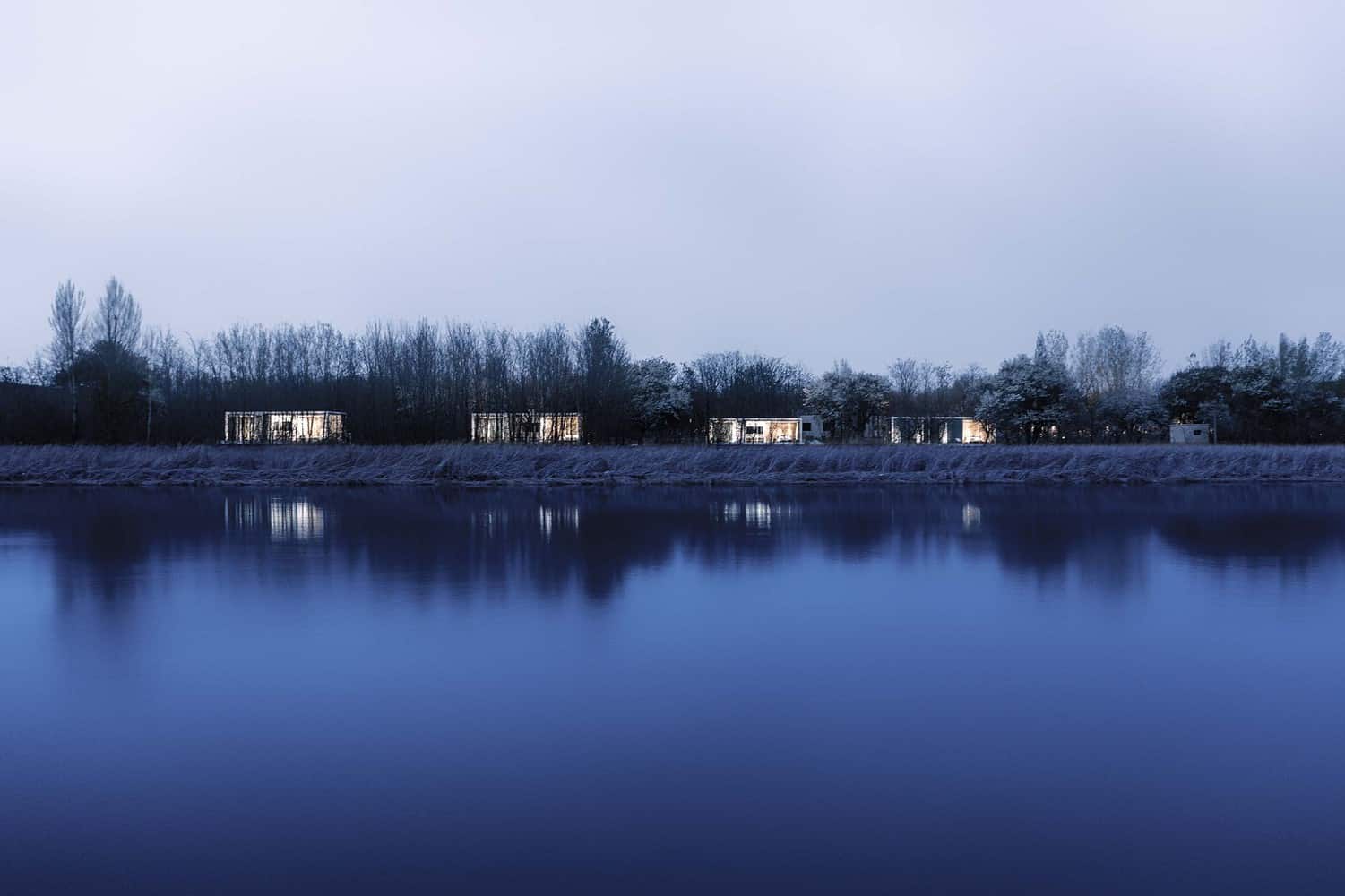 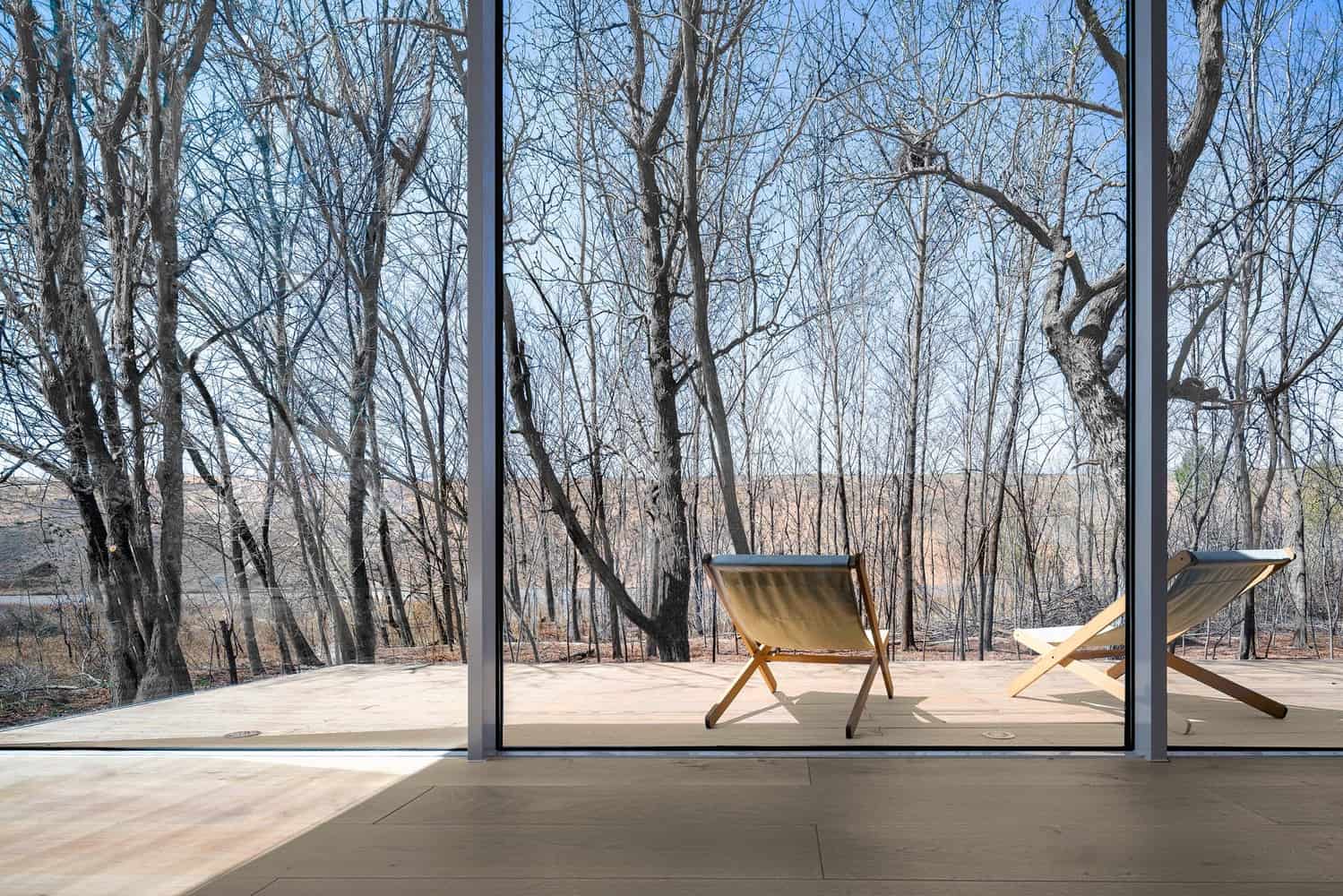 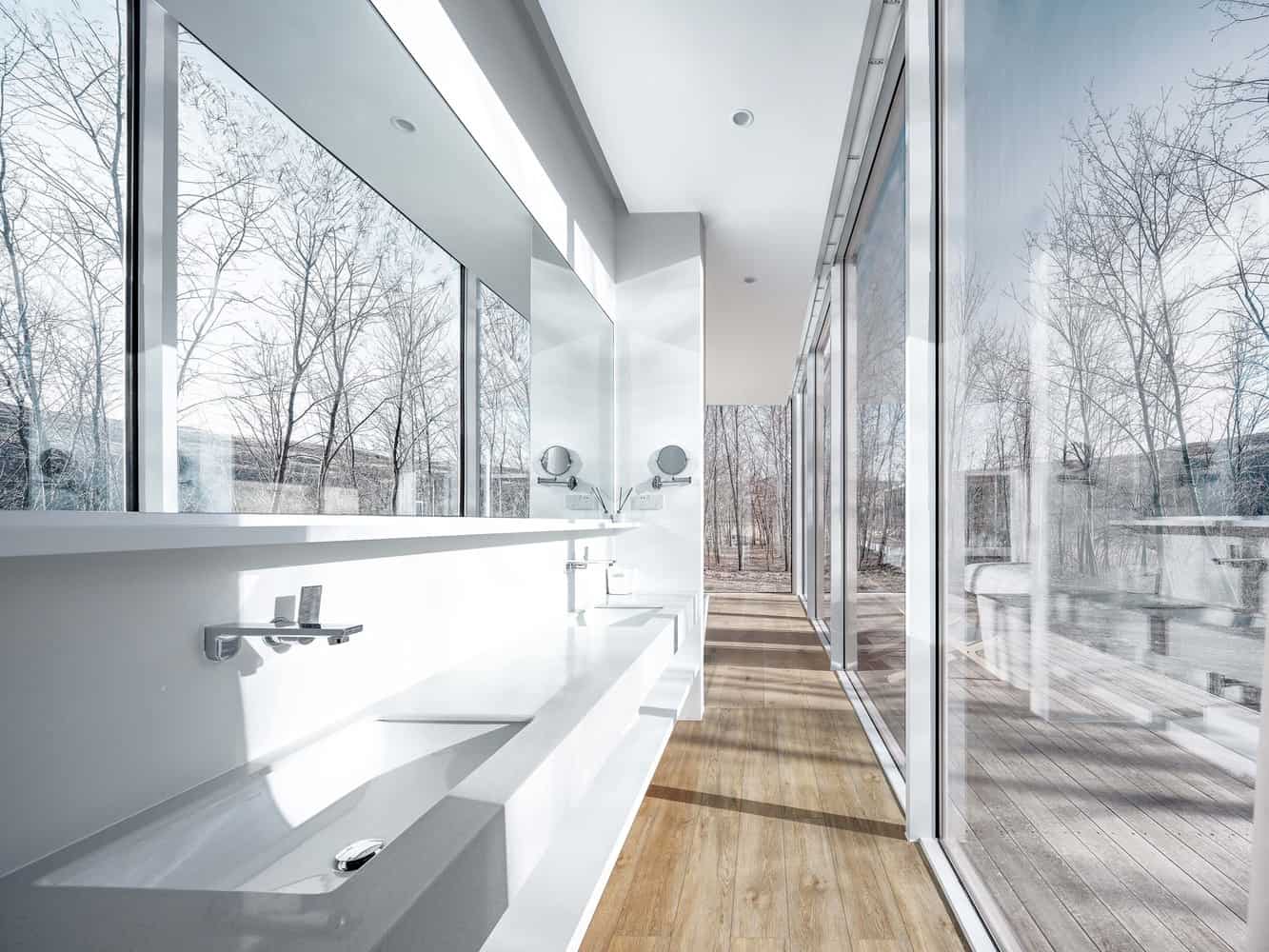 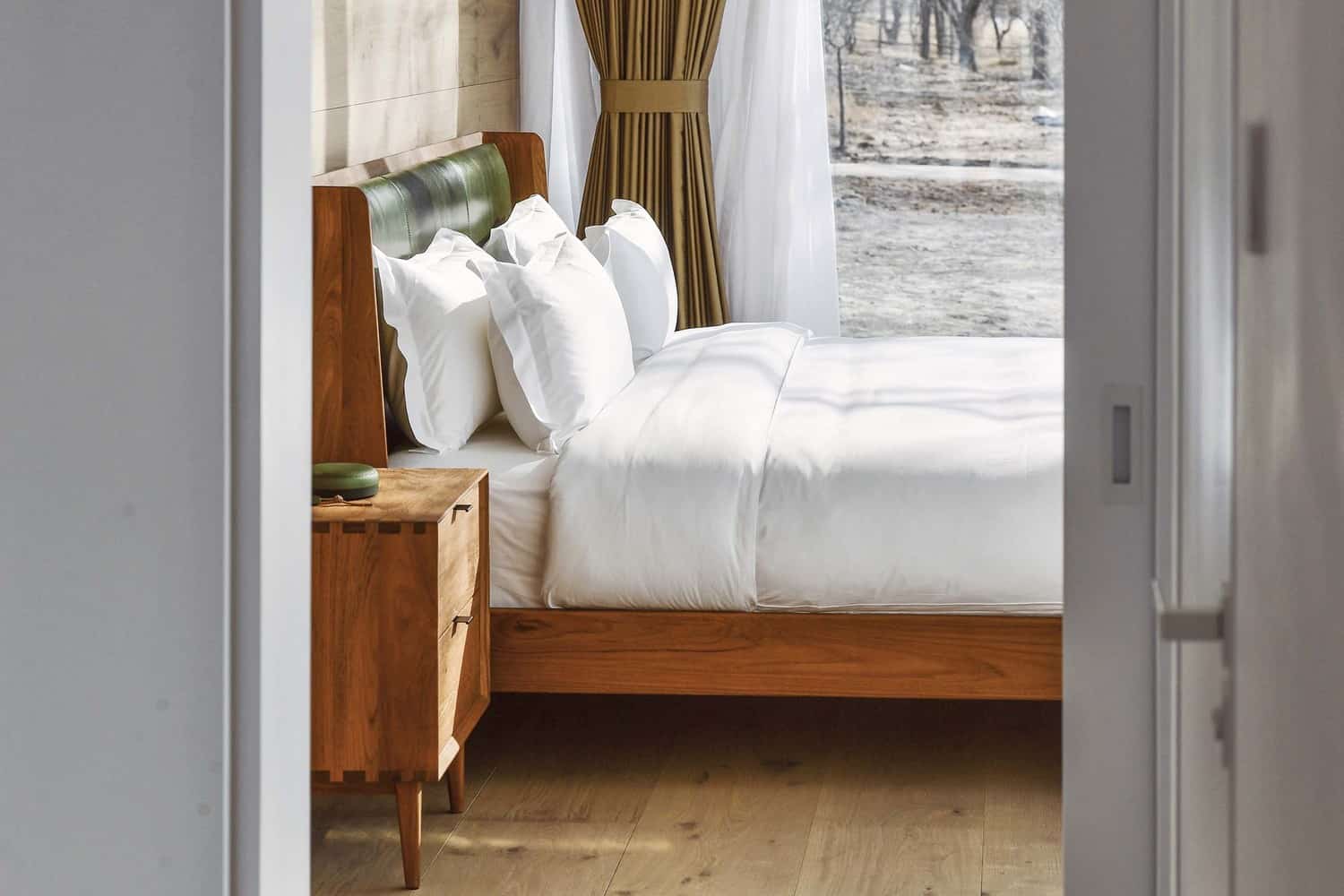 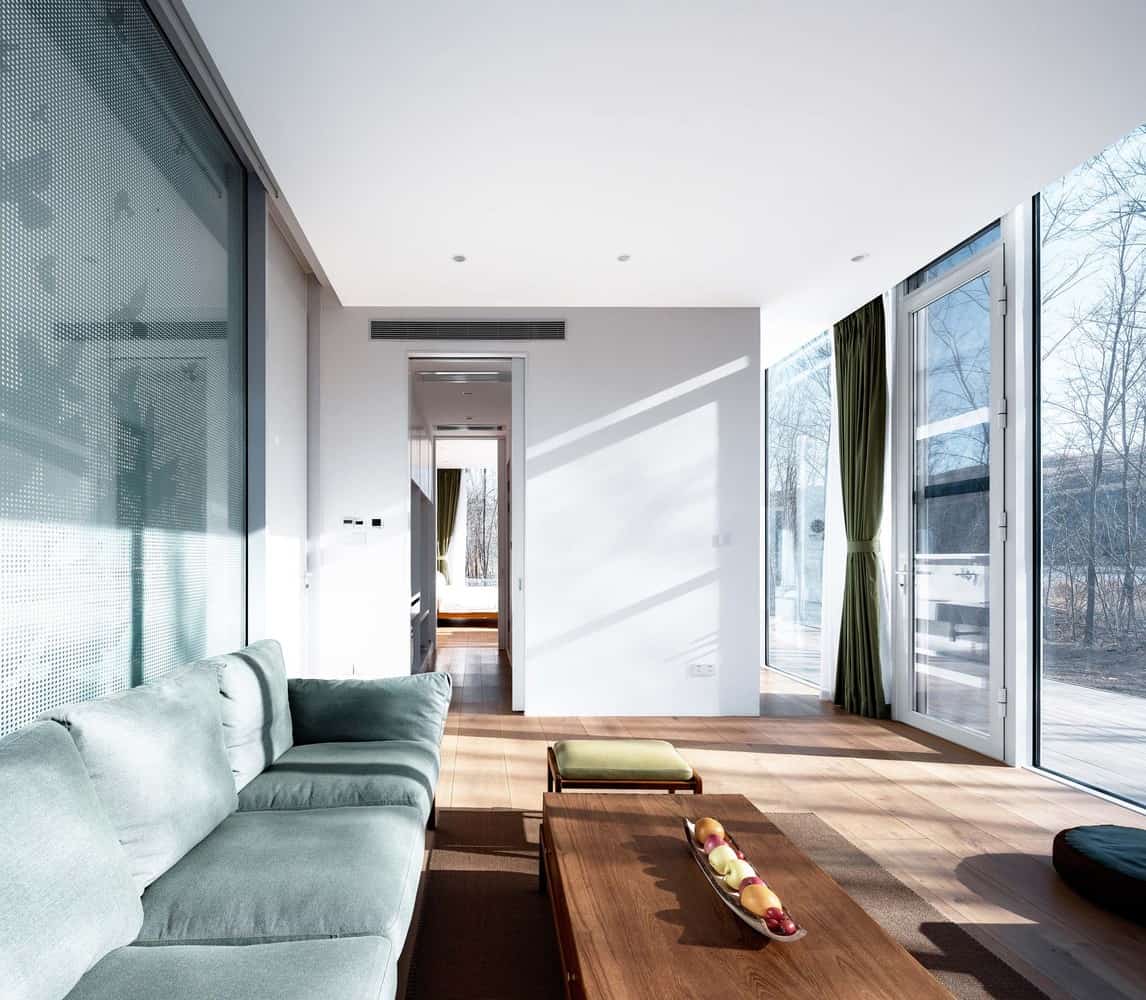 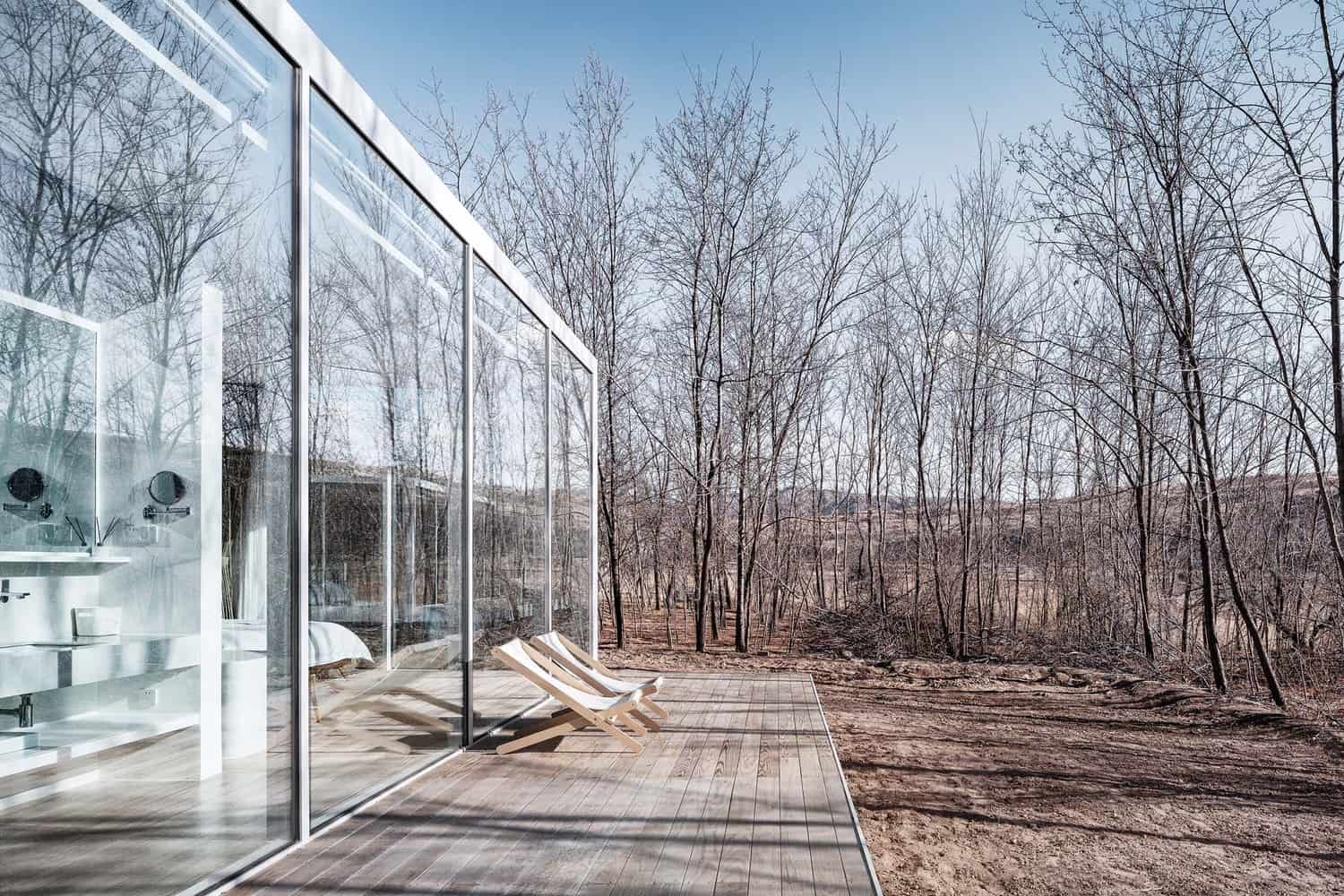 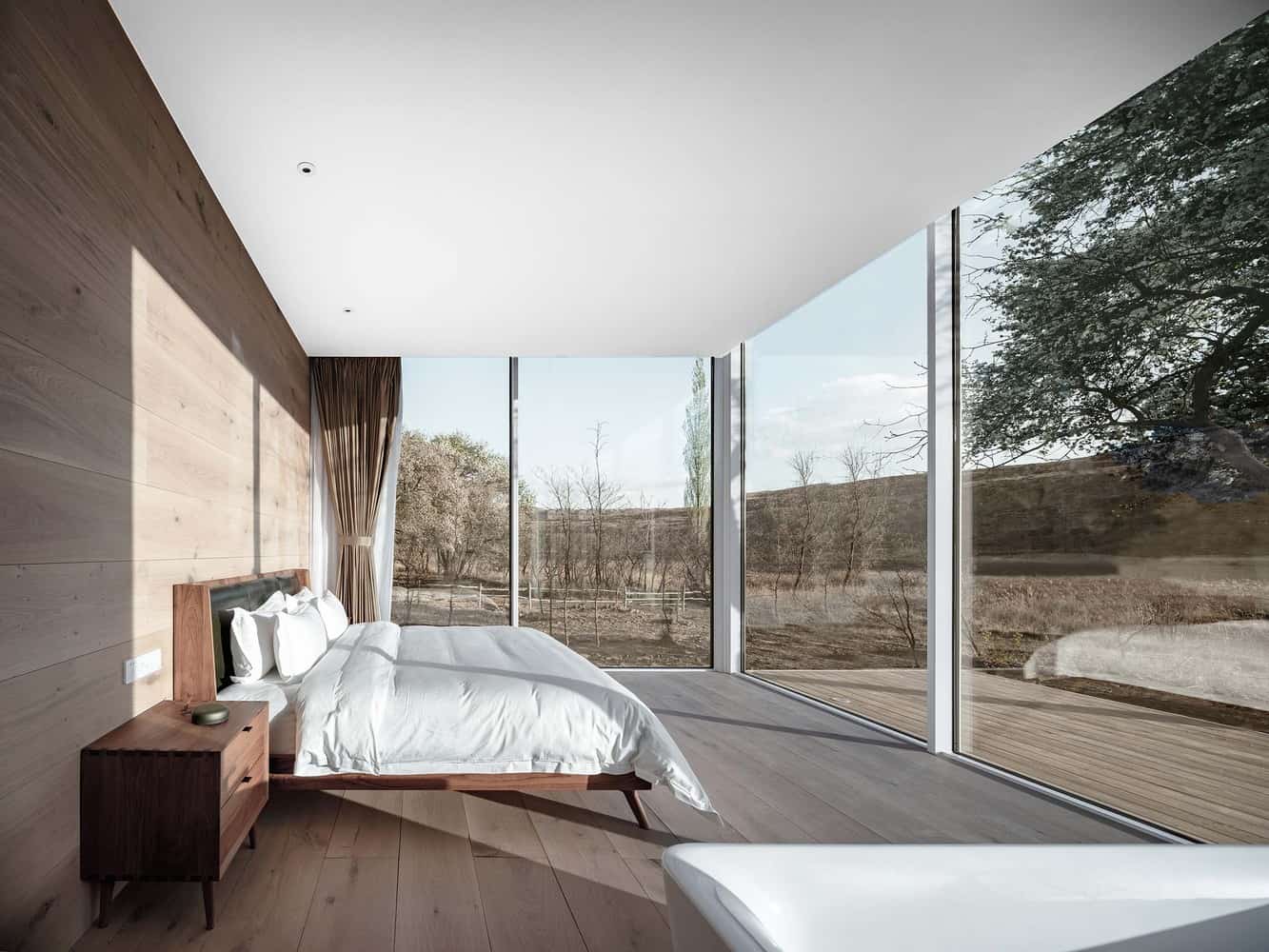 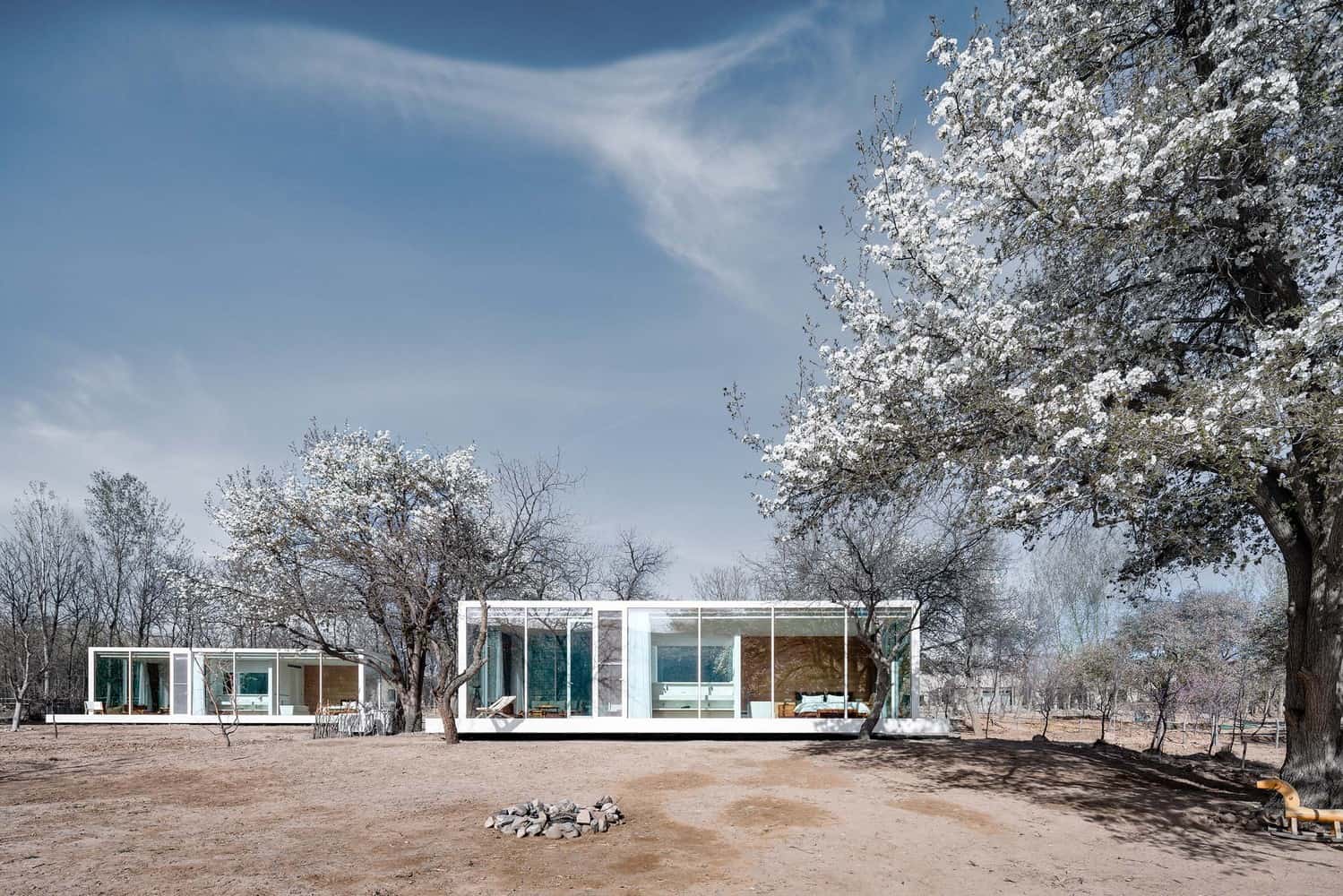 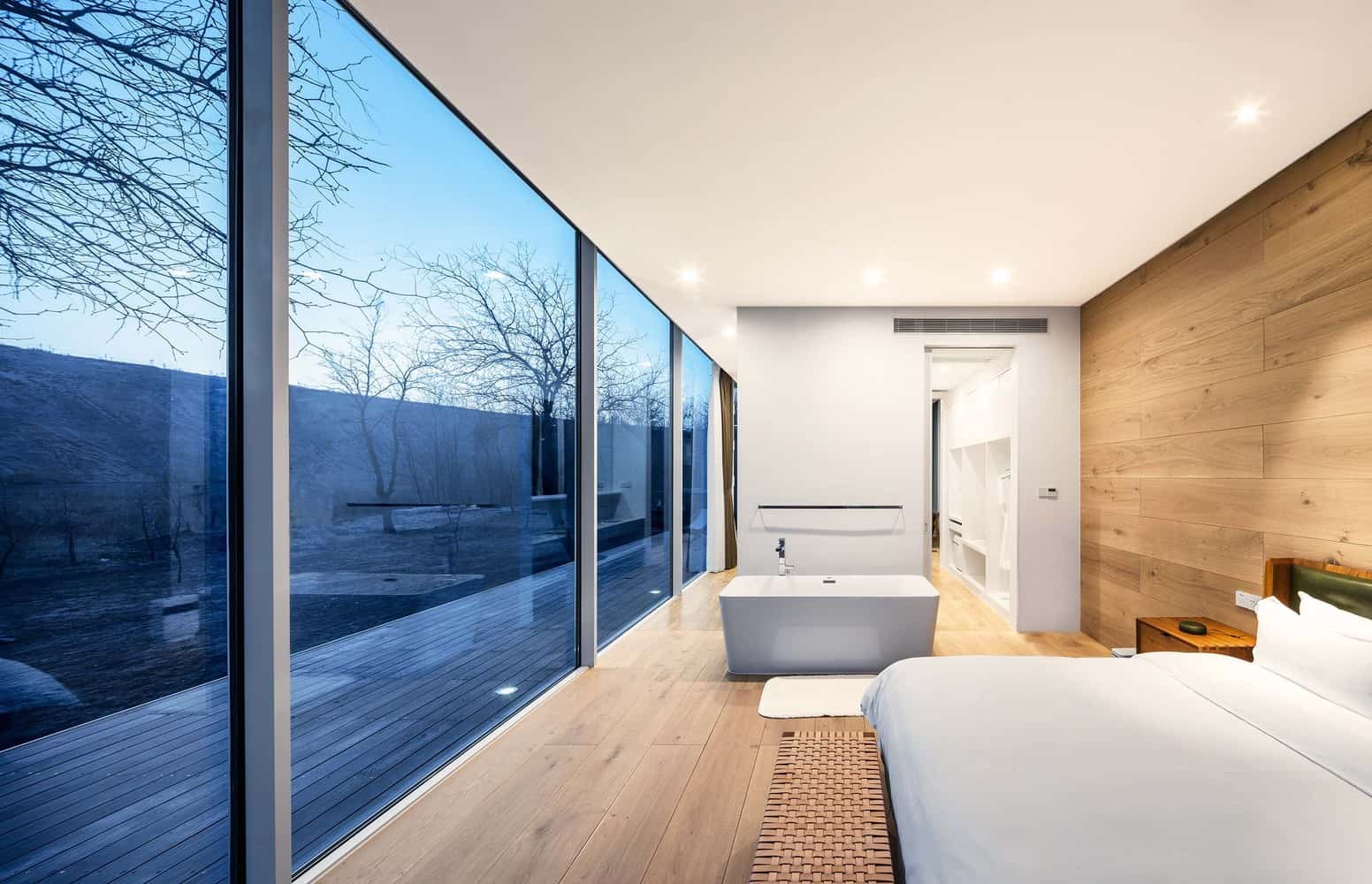 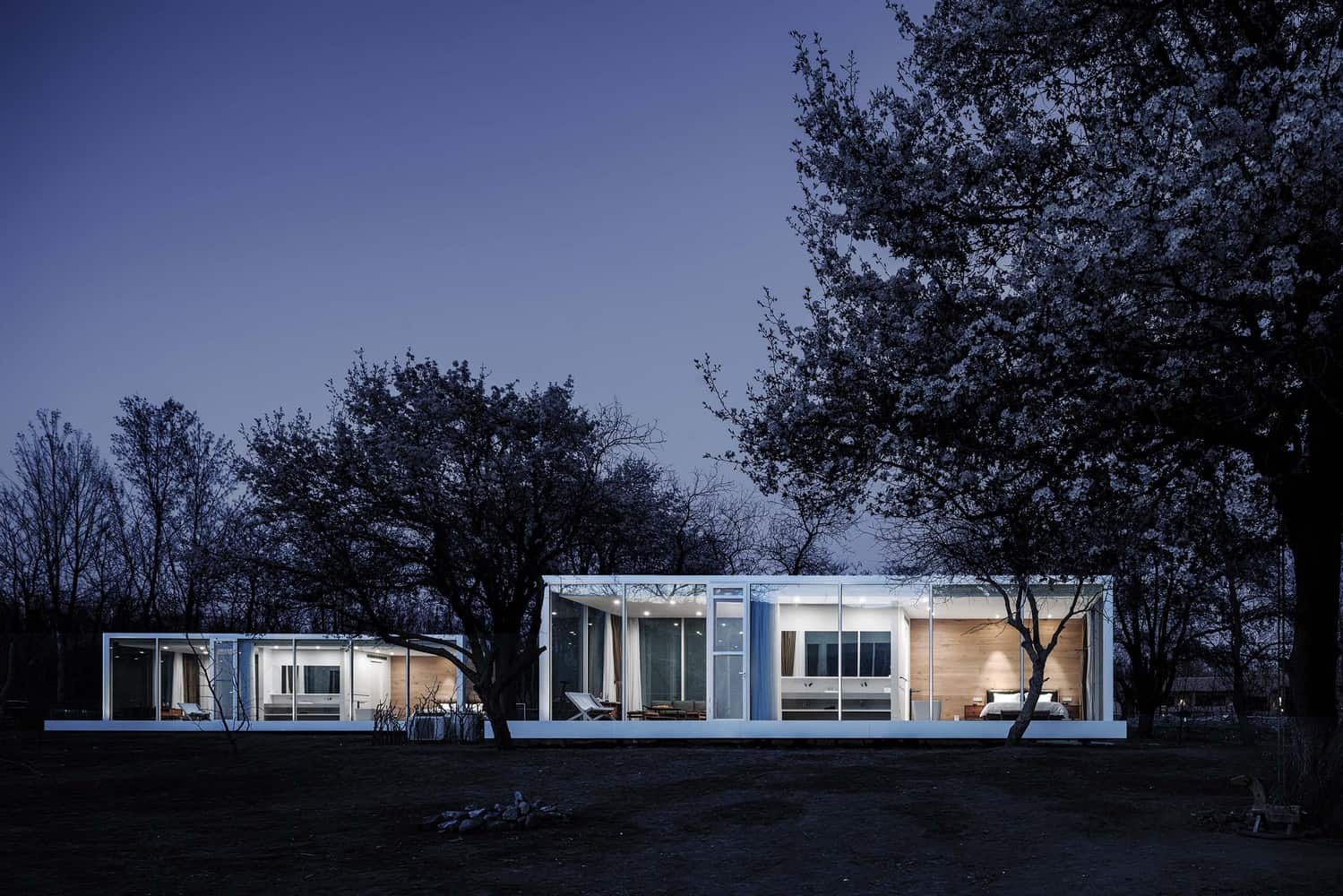 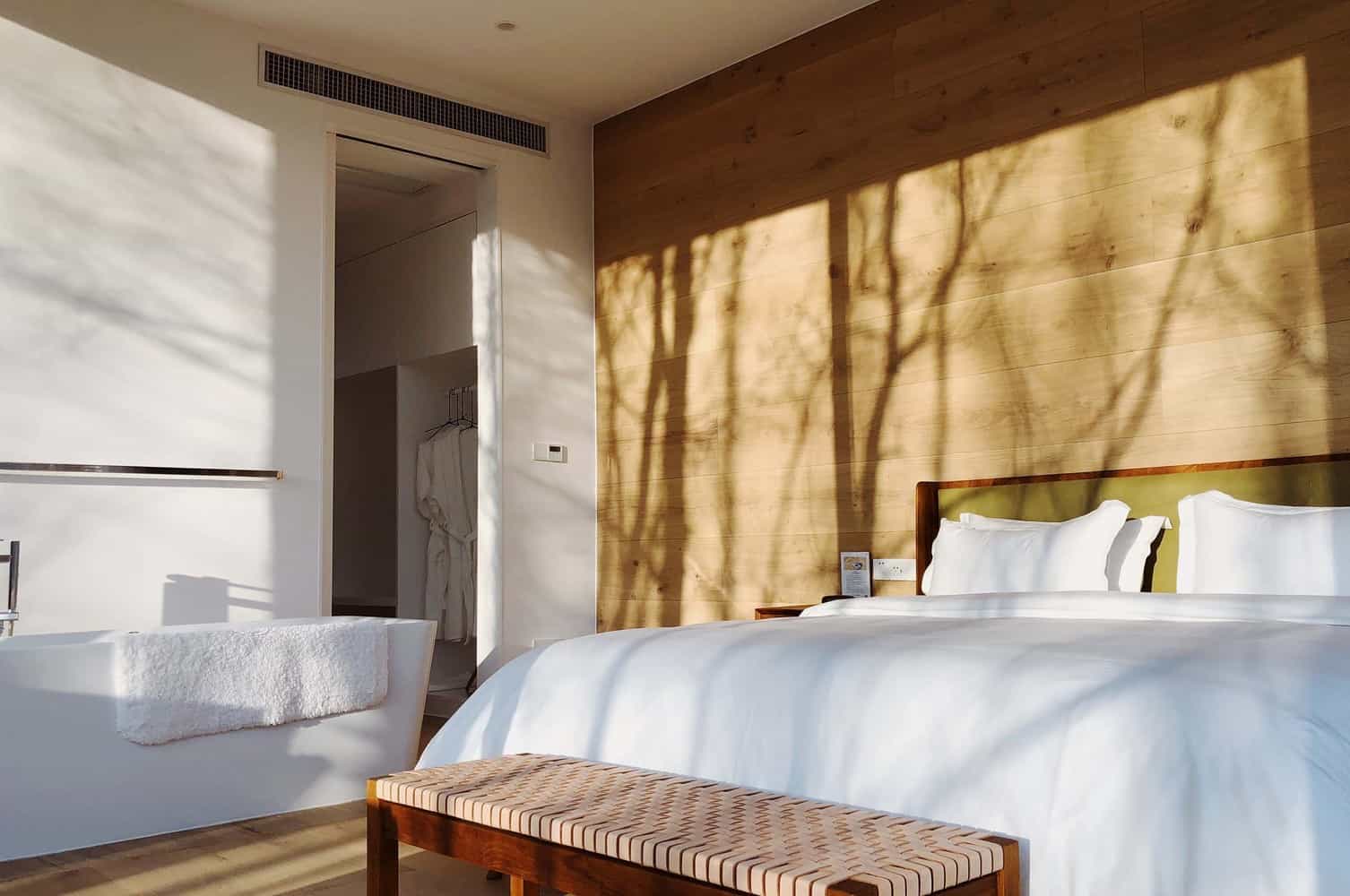 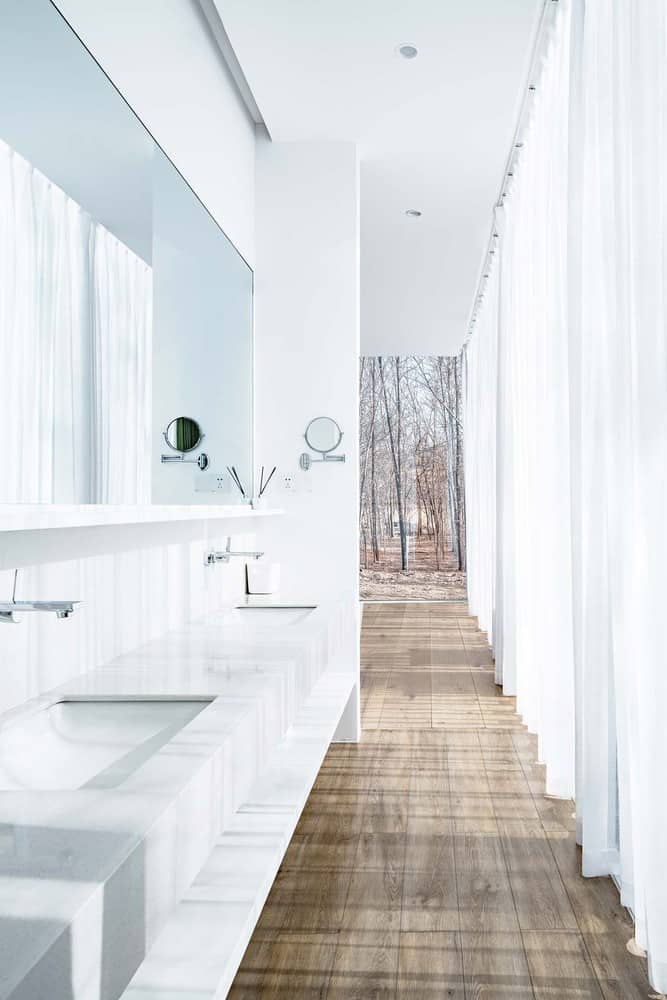 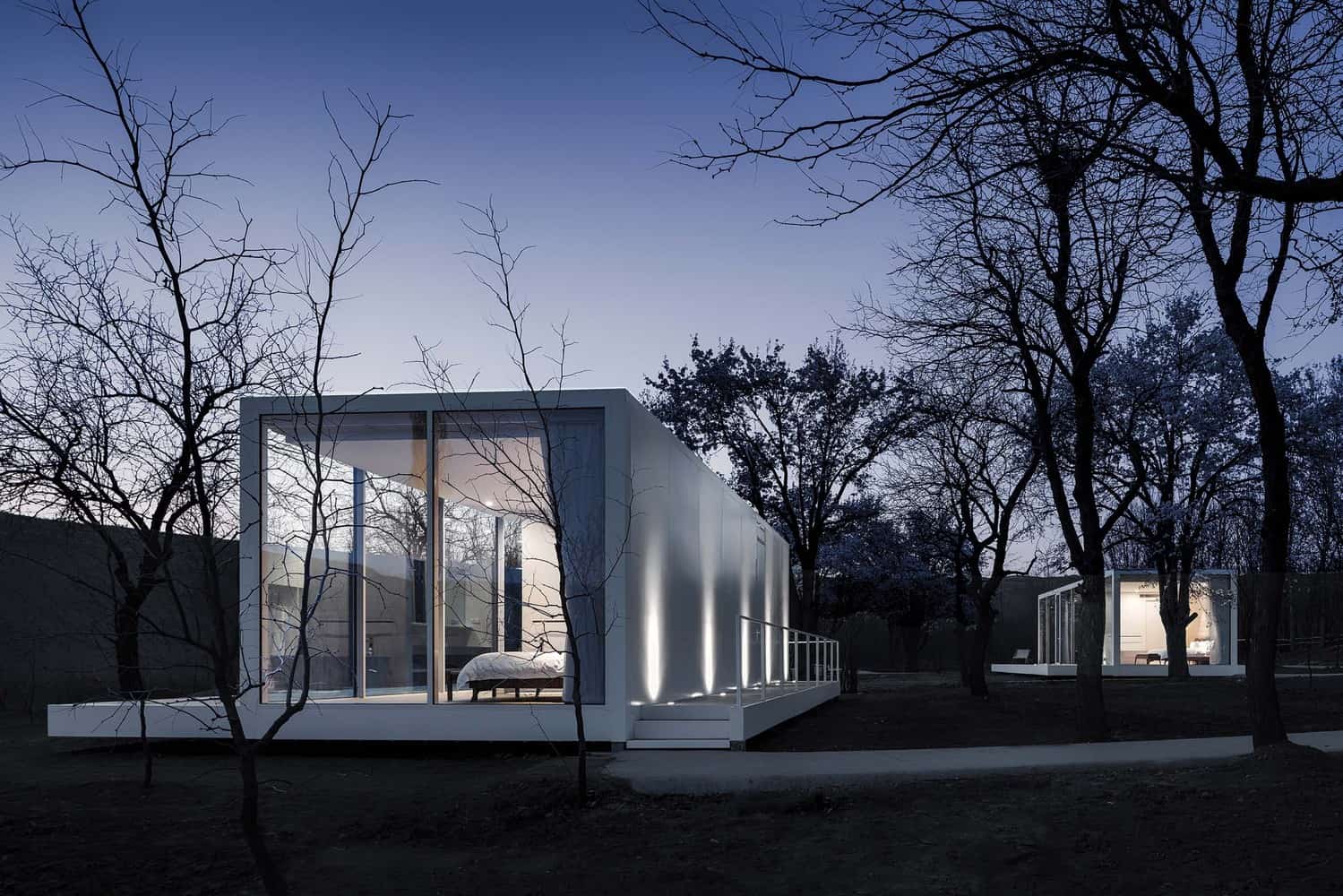 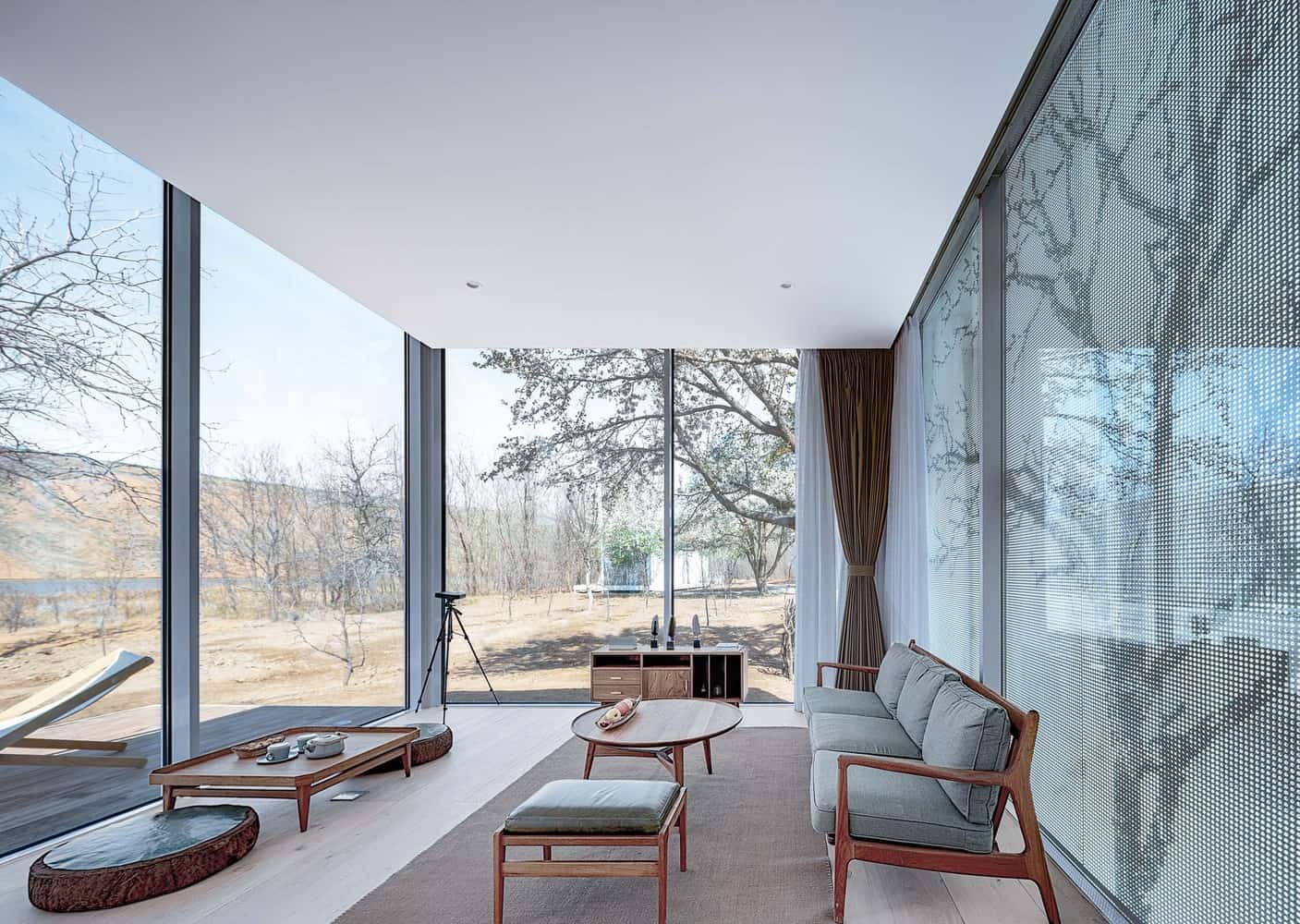 In the stunning rural greenery of Ningxia, China, innovative designers at STUDIO QI have recently completed and opened a stunningly conceptual and beautifully laid out escape called the Stray Bird Boutique Hotel.

This wonderfully modern boutique hotel sits in a sort of countryside oasis that is nestled right between the Yellow River and the Tengger Desert. This unique spot lies in the heart of China’s Ningxia Autonomous Region; a rare spot of greenery and flowing waters before the sand and sun take over the landscape.

The site of the hotel itself is an actual blossom orchard, which runs all along the horizon where the scenery changes and the desert beings to stretch in the distance. Since the location of the plot is so unique already, designers opted to follow suit and create an equally unconventional staying experience that somehow also still suits and jives with its green surroundings.

The main goal of the design team became to challenge the typical architecture in the remote, sparsely populated area in order to create something incredibly airy and open feeling. They took great inspiration from ideas of transparency, letting a contemporary sense of minimalism provide breathtaking views that allow one to feel like their newly sought out private space is one with the surrounding landscape.

The hotel is made up of several separate volumes dotted closely enough to one another to avoid feeling isolated or cut off, but far enough from one another so as to feel private despite their openness. Each small respite space is made from a pre-fabricated frame that was brought in and erected on site in order to interrupt the topography as little as possible and preserve it.

Despite the simple, pre-fab frame of each little building, the interiors of the units are nothing short of sophisticated. The details and finishes are sleek and modern looking, equipped with full amenities, but also subdued enough to allow one’s concentration to lie fully with the beauty of what lies outside.

Part of what makes the outdoor areas so easy to appreciate and connect with from within each of these lovely little escapes is the Low-E glass curtain wall technology that is installed in three sides of each. This lets the walls fold back entirely as though they have been opened by curtains, creating a stunning blending of interior and outdoor spaces, as though fresh air is limitless.

Within each serene unit, the interior spaces are quite open concept in terms of their physicality. In terms of their function, however, they are organized according to three different actions: sitting, standing, and sleeping. Since the whole focus of the hotel is relaxation and seeking peace, the actions of sitting and sleeping are regarded as being the most important, so these are the actions that are most catered to within each unit.

In order to facilitate maximum relaxation, designers placed spaces for sitting and sleeping in each of the four corners of the units, nearest the large windows and retracting walls for maximum sunlight, fresh air, and access to nature. Other functions of the space, or the parts that require standing and things other than relaxation, are compartmentalized to the centre of the room, facilitating easy flow of space and energy.

This is quite opposite to how most retreats and hotels are built. Normally, the most private spaces, like the sleeping quarters, are removed from view and kept on the most private side. Here, designers have moved the resting areas to the edges on purpose, giving them clear paths to the outdoors, and prioritizing visual and open air connections to nature.

The units are not, of course, completely devoid of privacy. On their back walls, where they face each other most directly and would therefore lend the most view to others staying at the boutique hotel, each one features a playful looking perforated wall. This allows semi-privacy in that onlookers cannot see into the unit, but guests are still afforded the natural play of light and shadow as the sun moves across the property.

Across these perforated back walls, designers created beautifully painted themes in subdued colours that look like shadows and light play in and of themselves. Each unit features a different theme, ranging from pear trees to the birds the hotel is named after. The images create a sort of nature inspired backdrop to the peace being sought inside.