Home » Dream Home » The contemporary Apartment in New York, created by Crosby Studios, gives us a stunning case of the blues

The contemporary Apartment in New York, created by Crosby Studios, gives us a stunning case of the blues 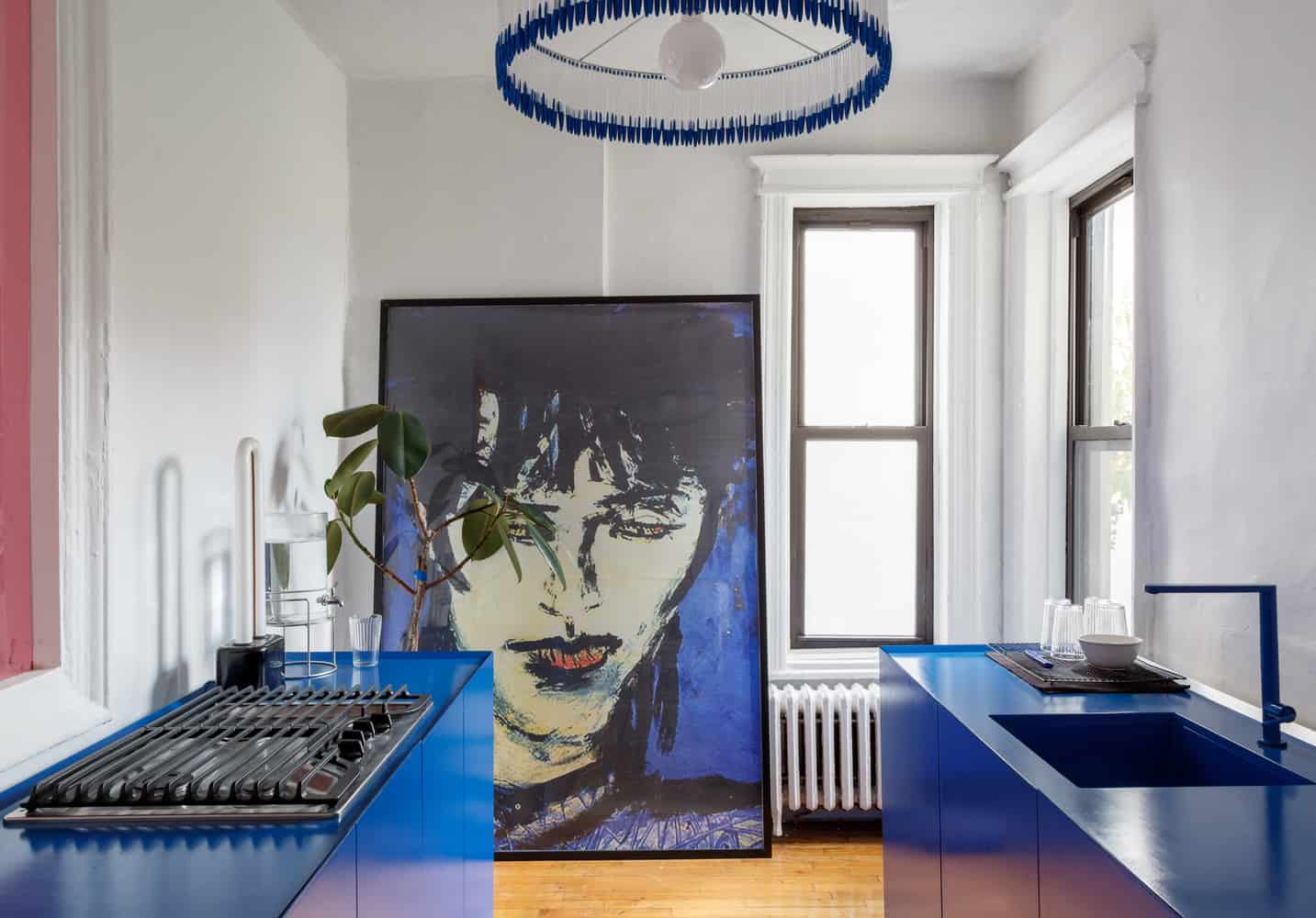 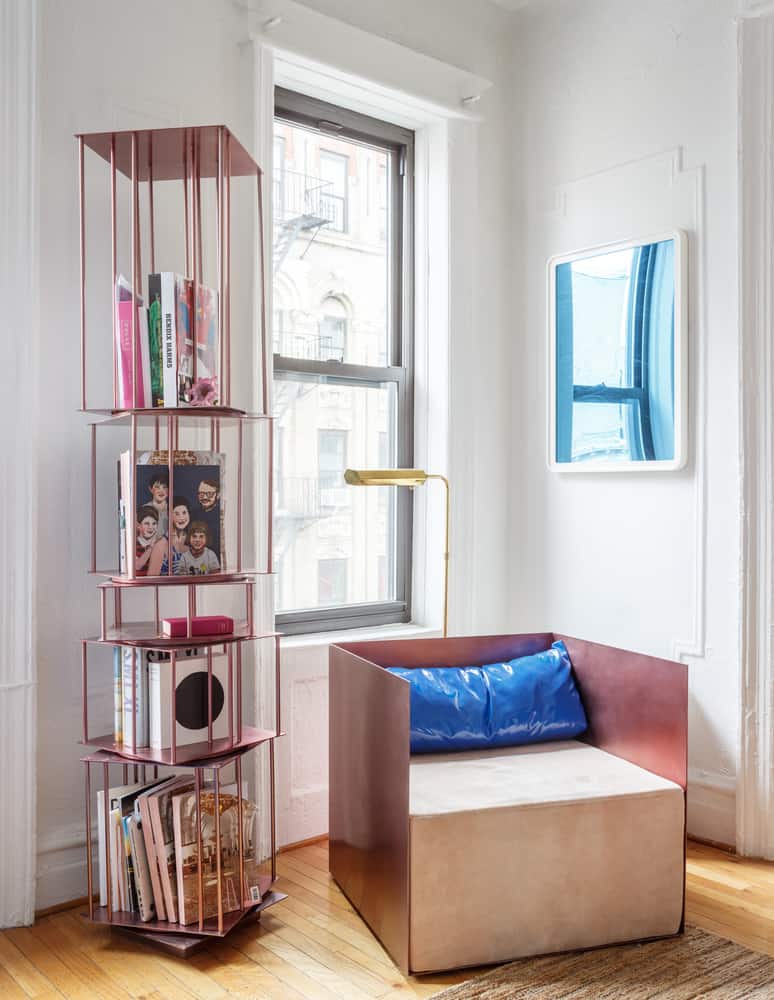 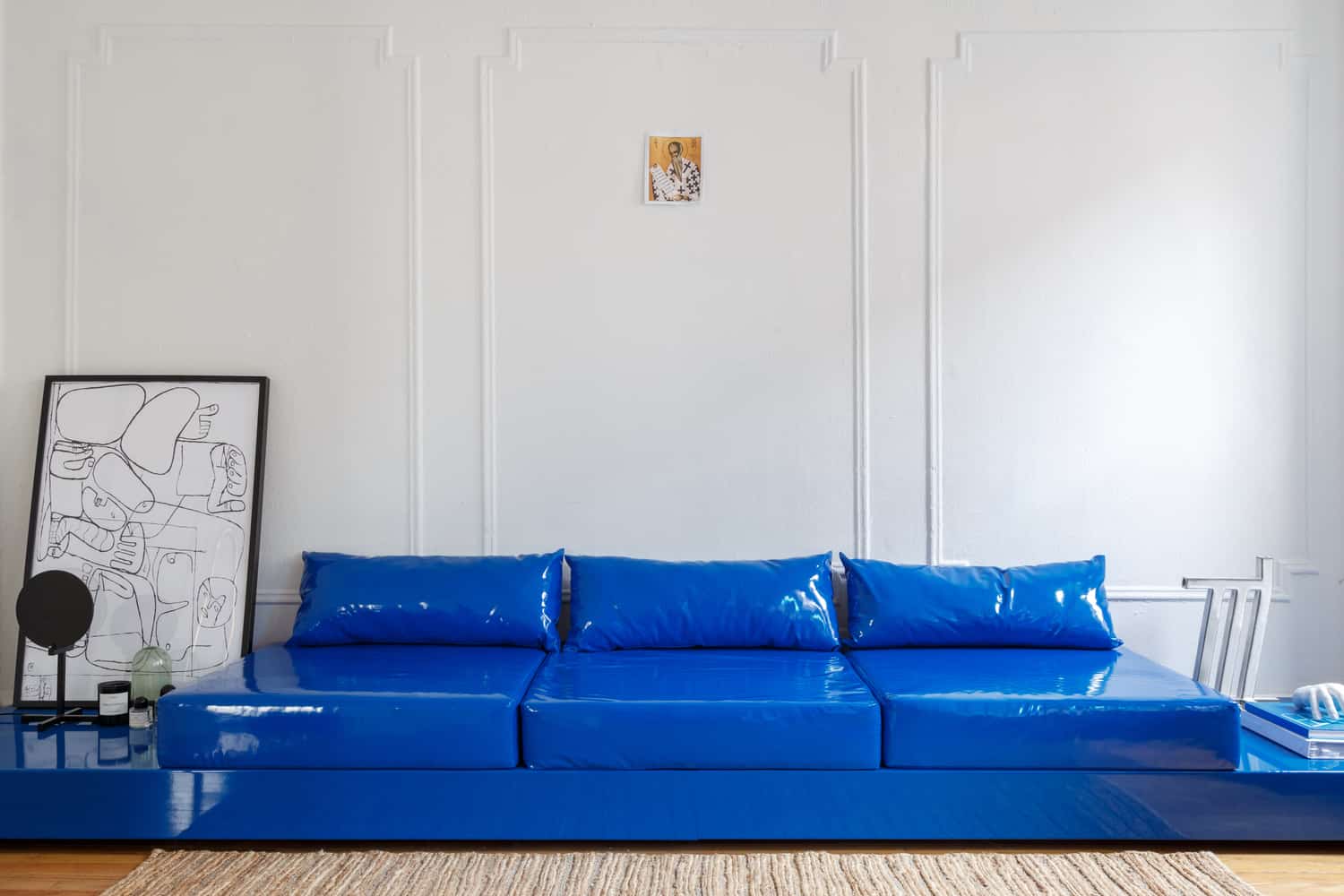 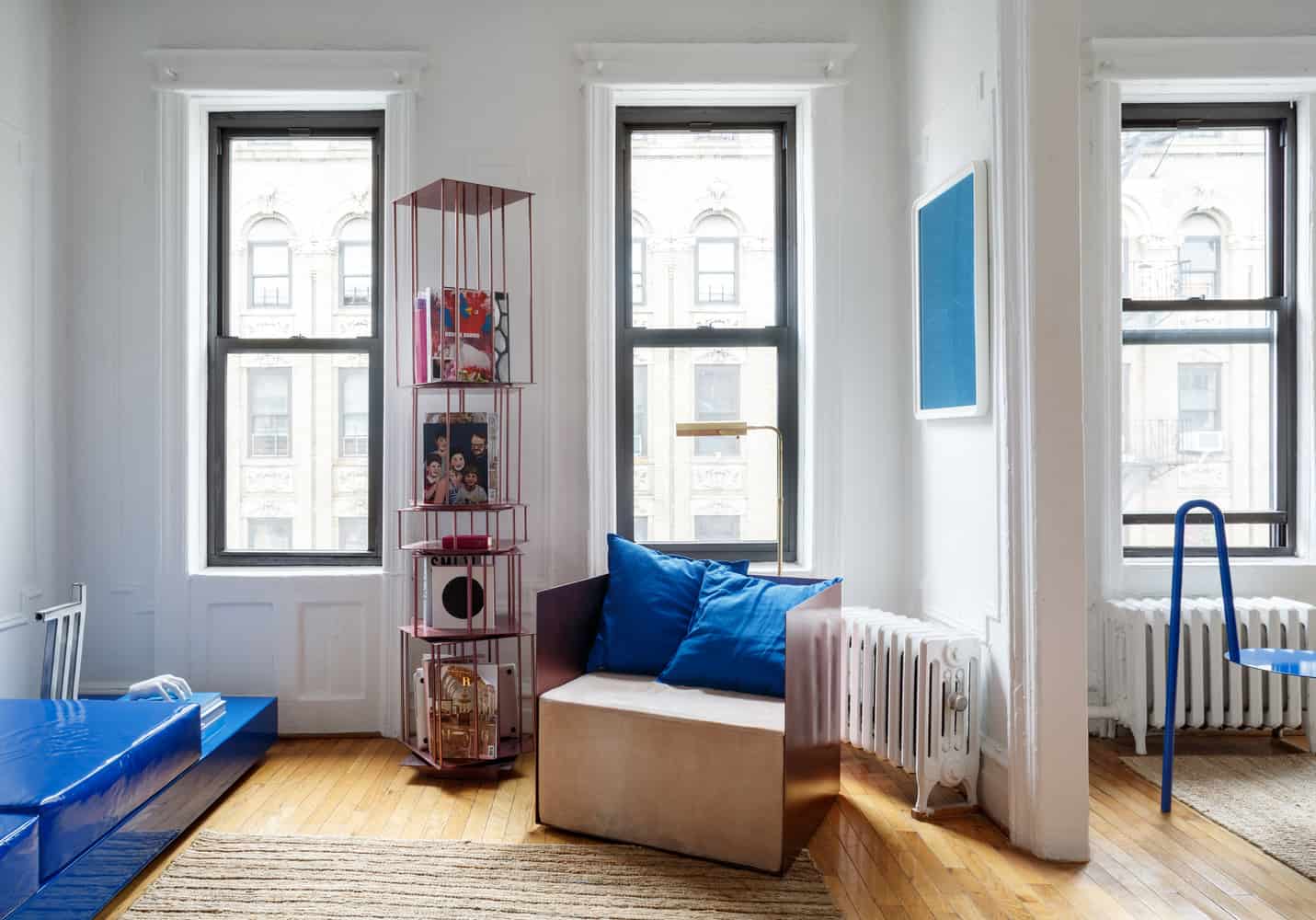 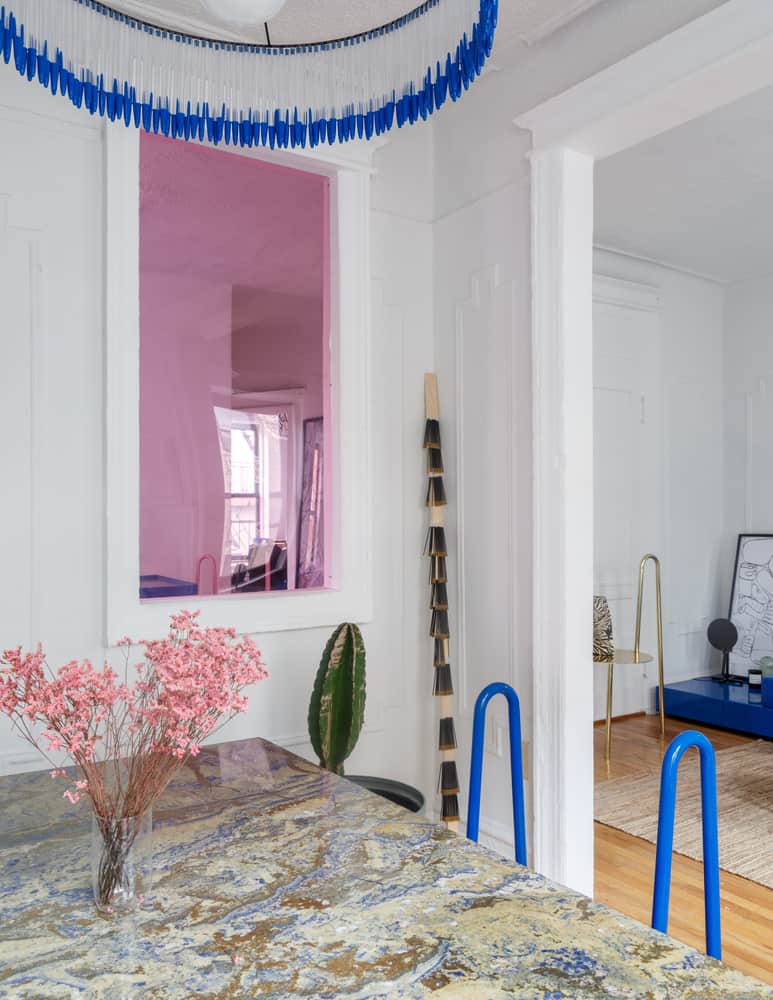 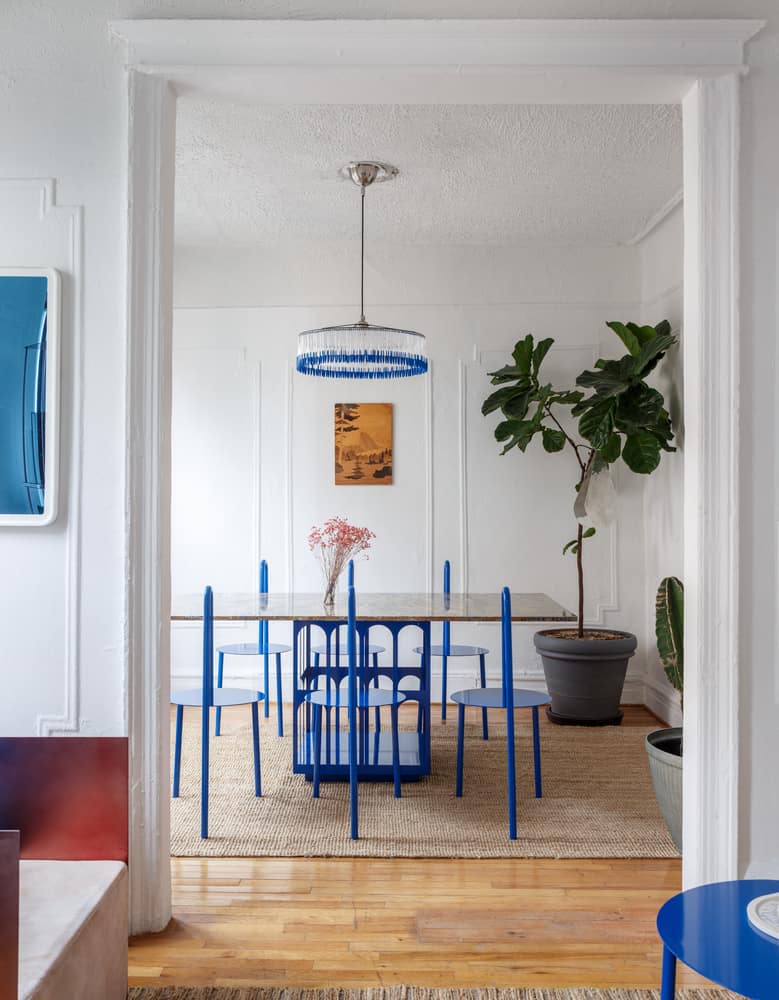 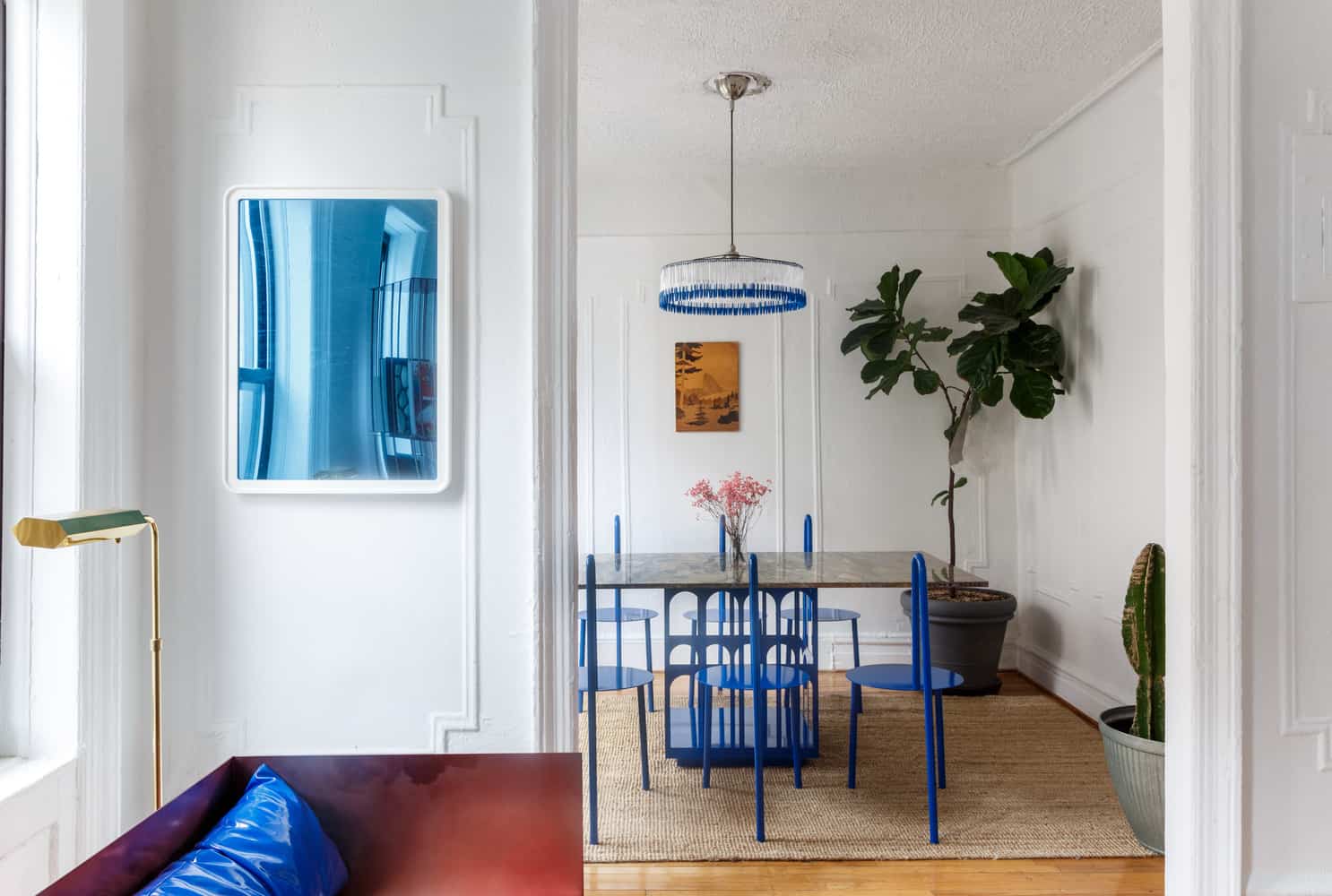 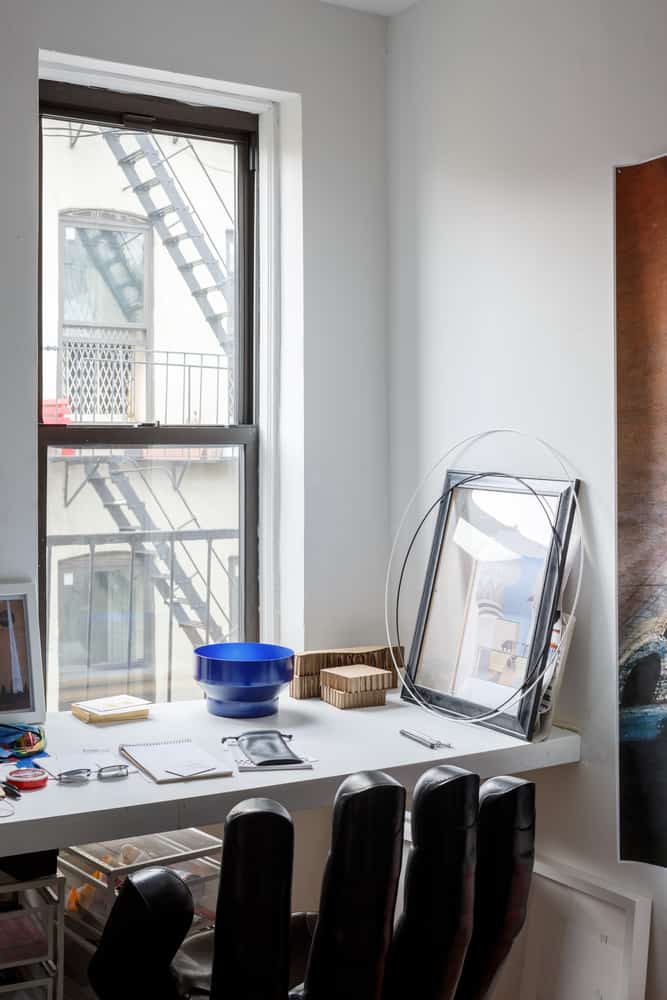 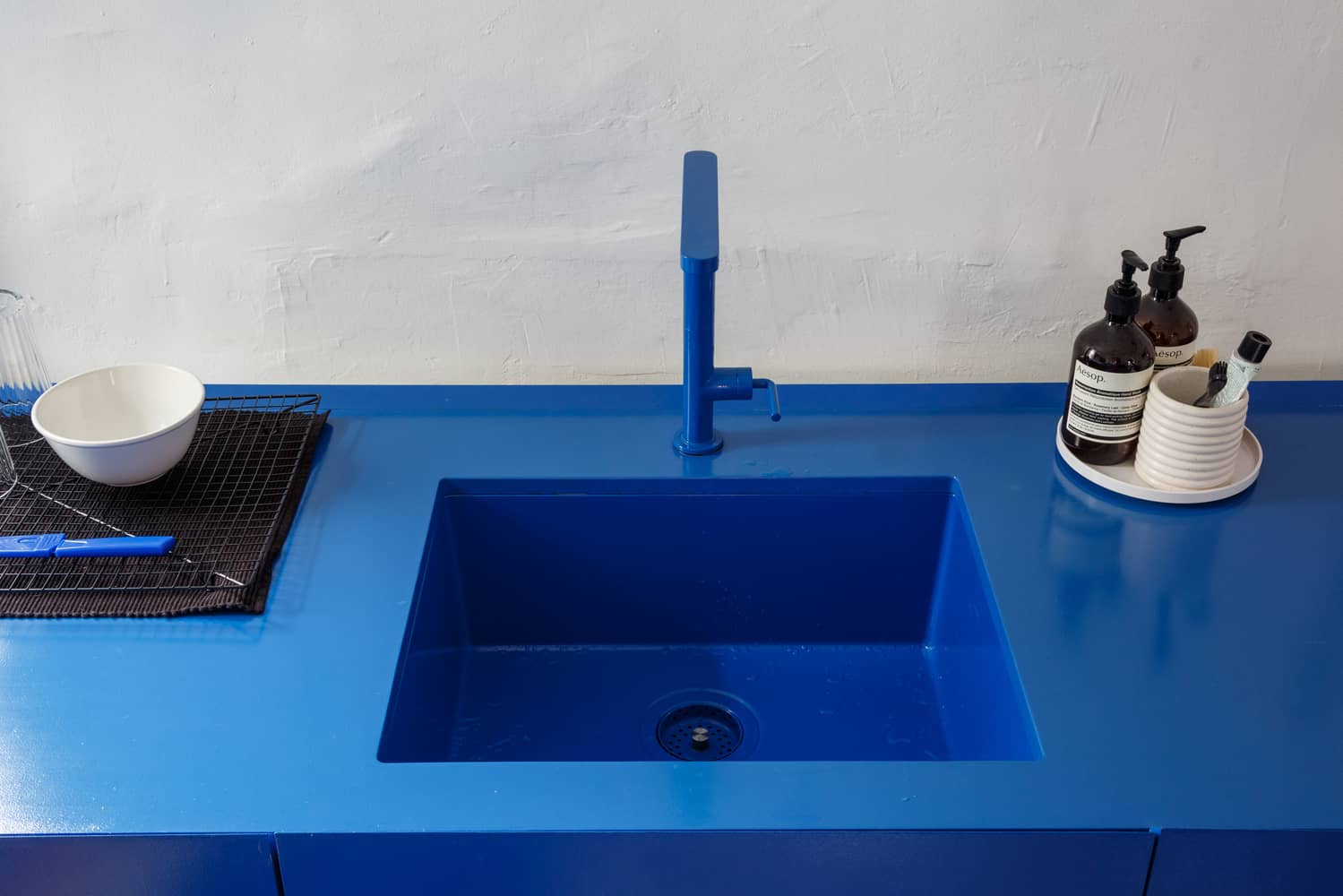 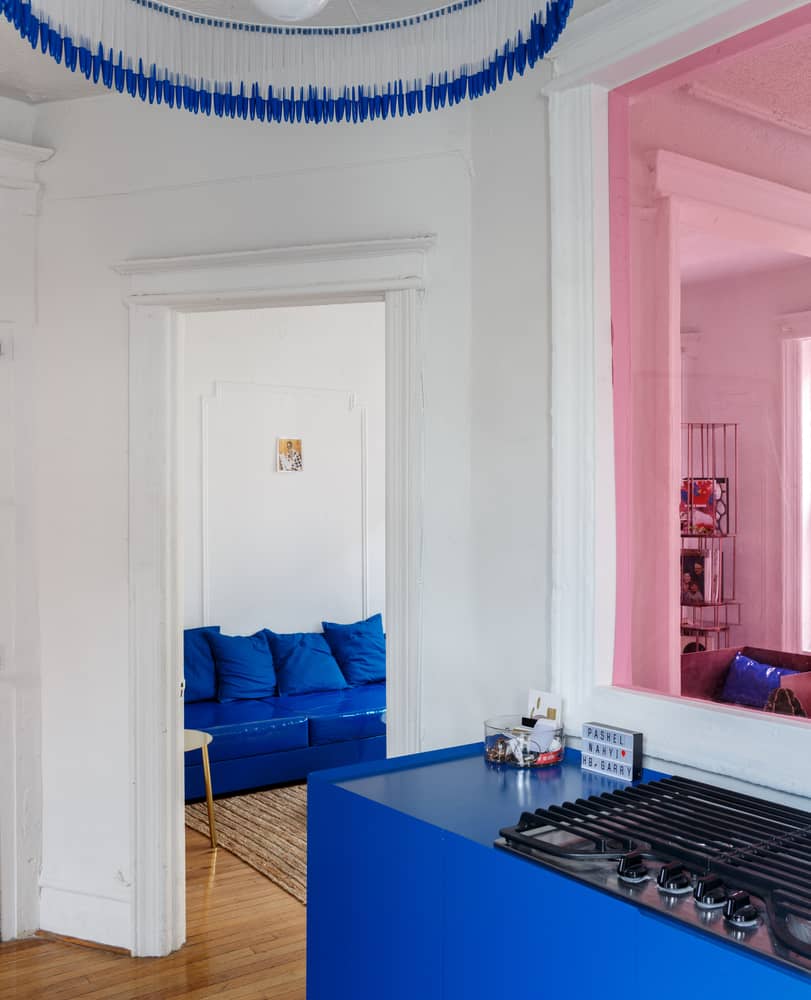 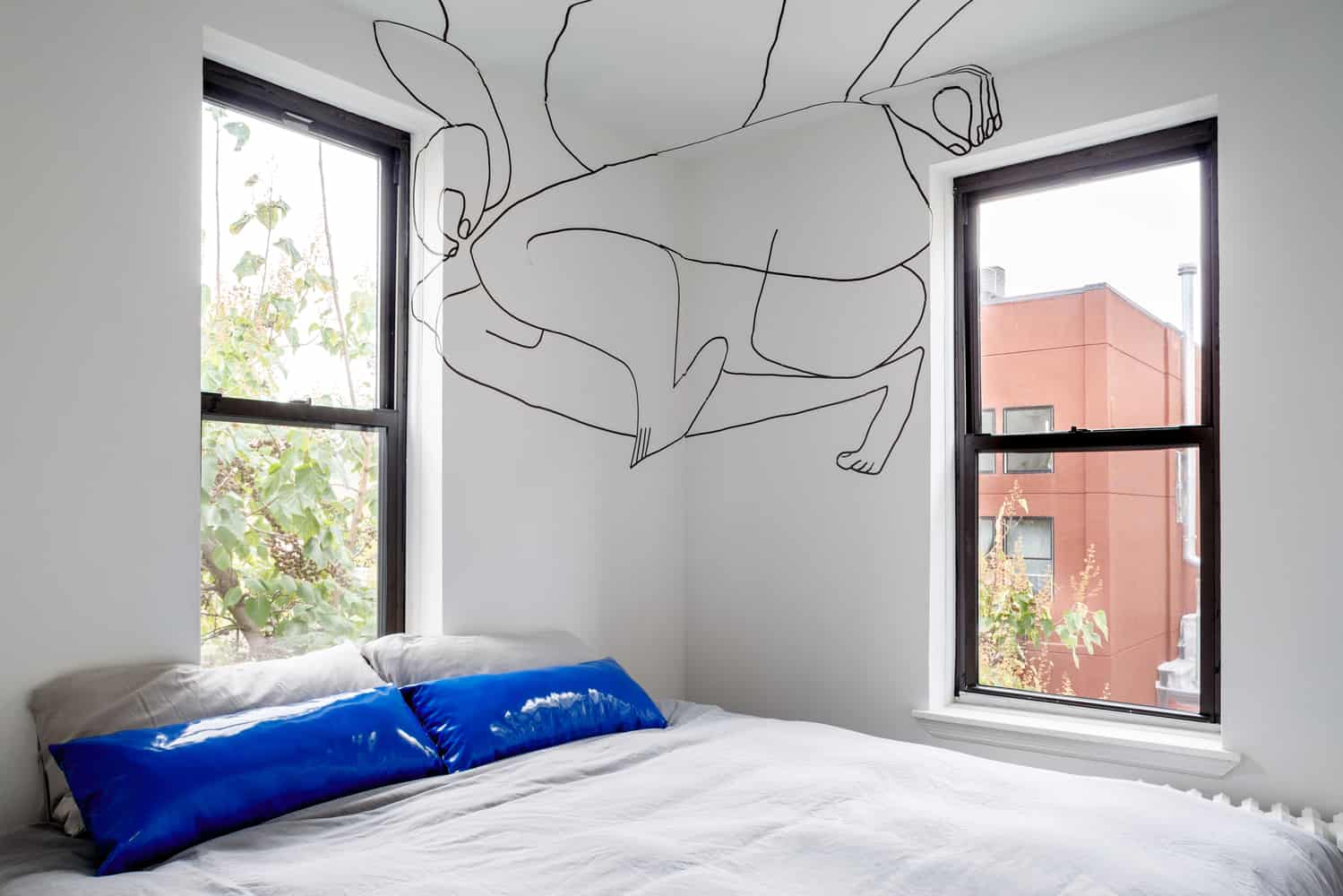 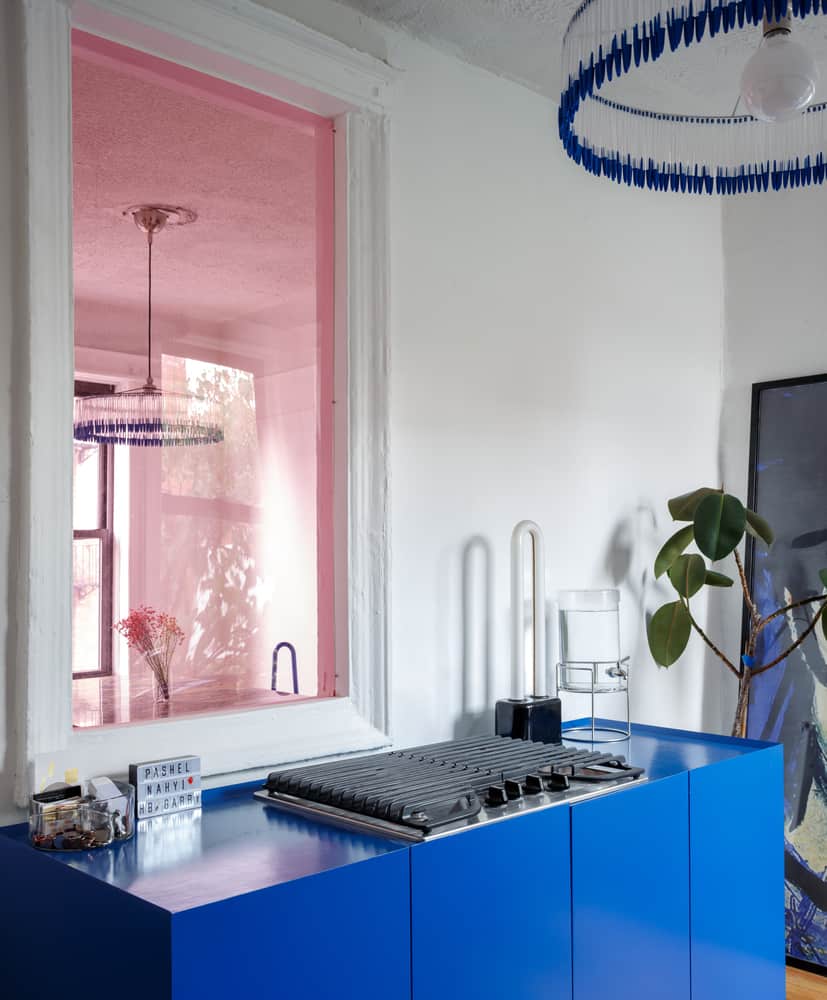 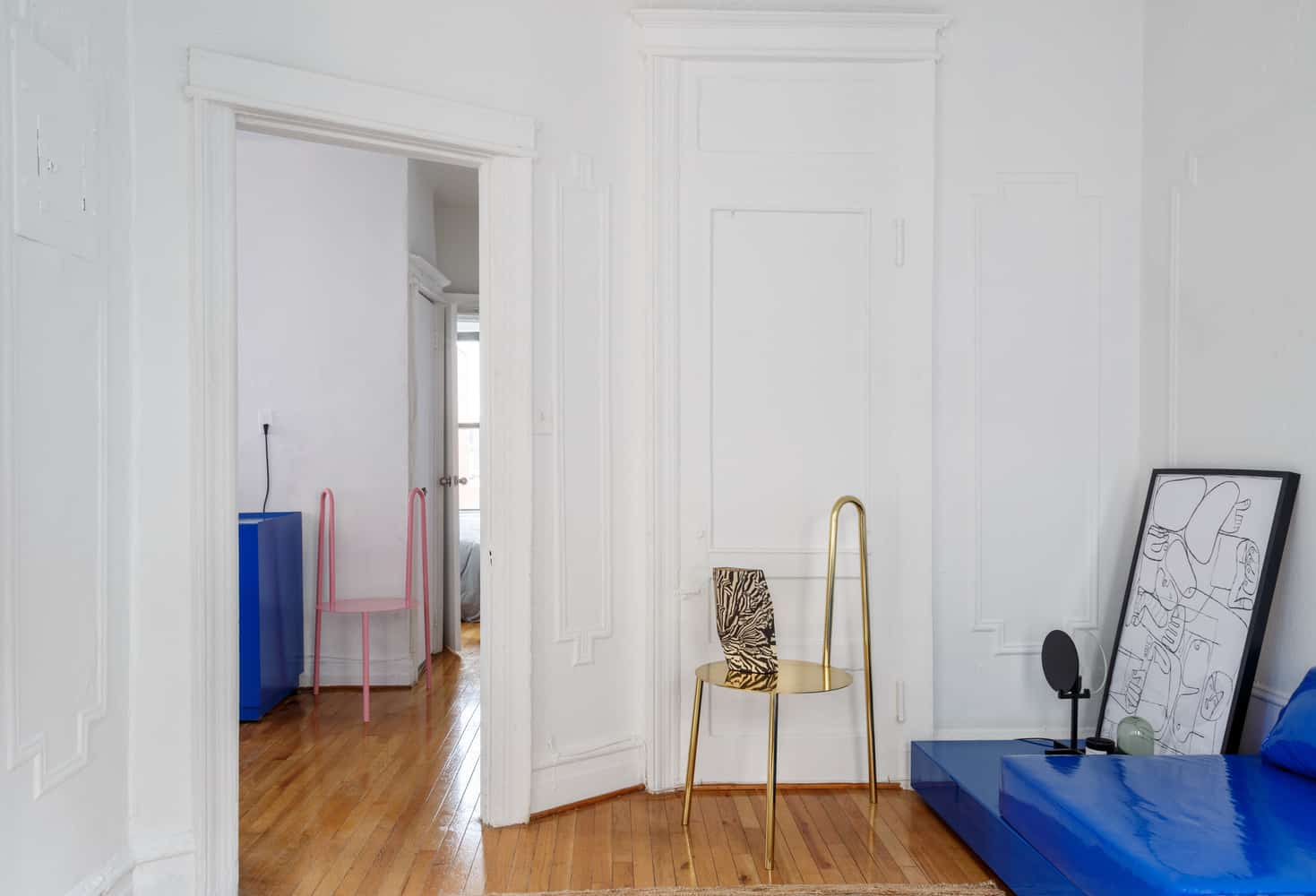 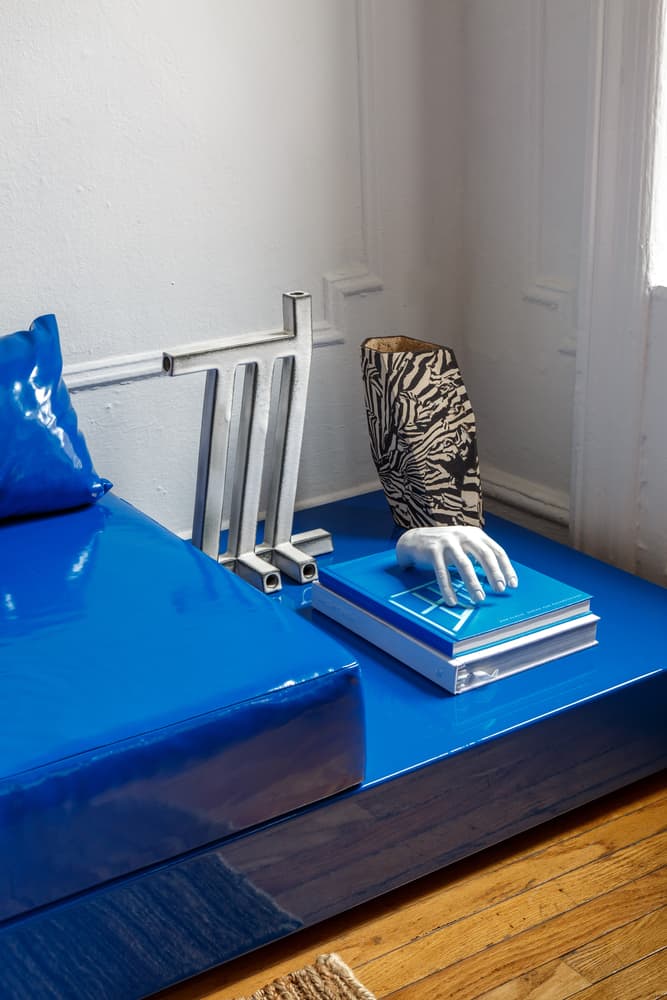 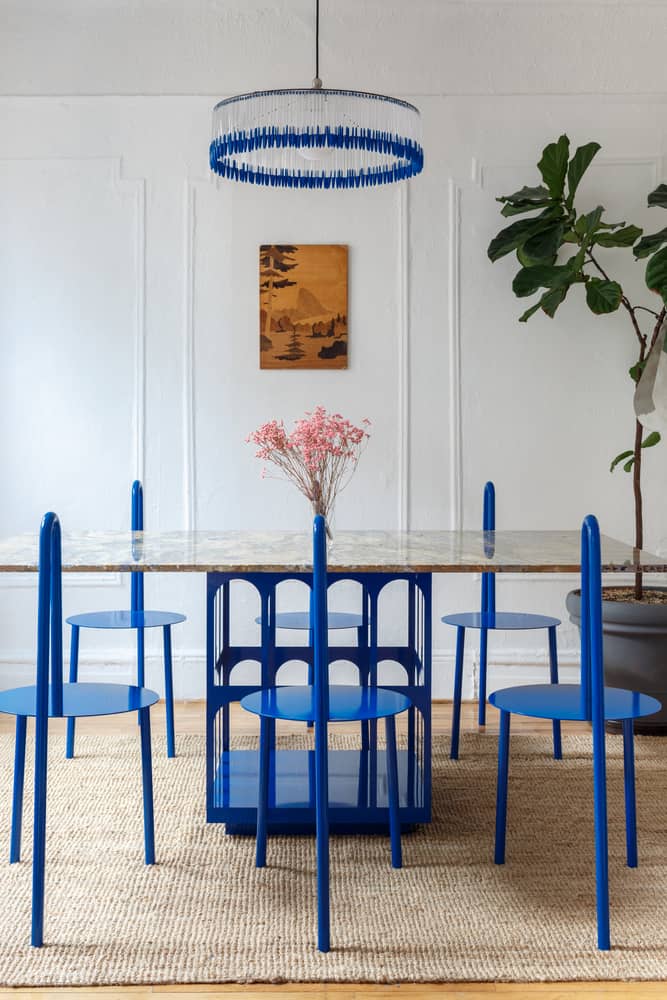 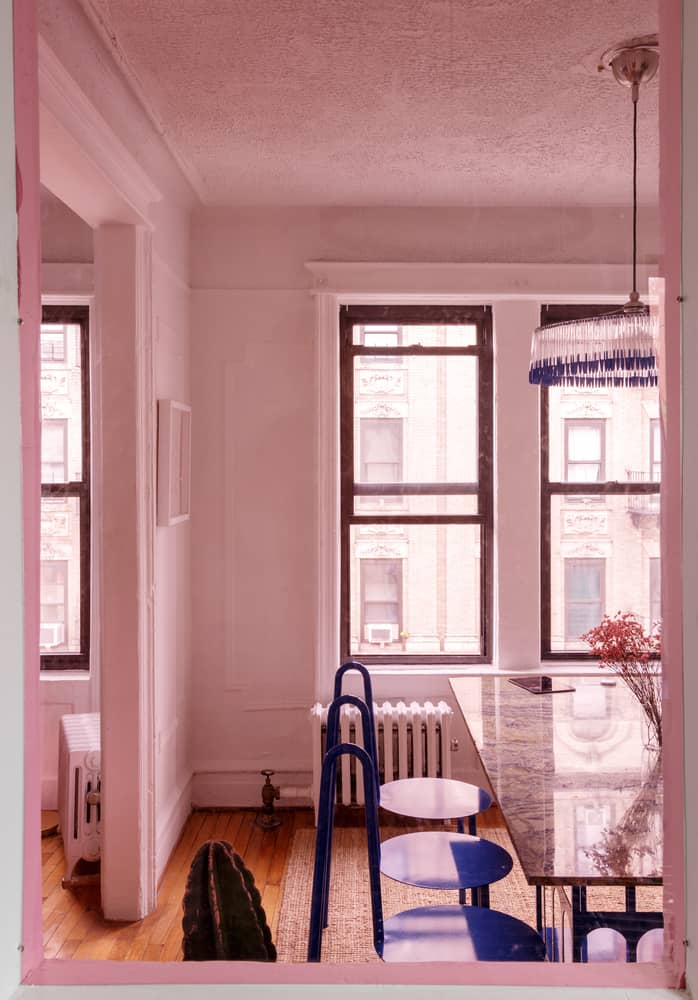 In the heart of Brooklyn, New York, innovative and artistic designers at Crosby Studios have renovated a small pre-war one bedroom space to make the impressive new Apartment in New York, notable for its contemporary style and pops of colour!

Of course, when one hears “pops of colour”, the mind might wander to a decor scheme featuring many bright colours at once. Instead, designers chose to make this home stand out for the way it communicates colour blocking through the use of a singular monochrome shade of royal blue in several eye catching stand out furnishings.

Blue might be the standout colour, but contrast is never a bad thing, even when you’re attempting to heavily establish a particular theme. That’s why, amidst all the blue, several shades of lovely pink can be found subtly peeking out. A pink glass window between the living and dining rooms counteracts the blue section sofa, while a pink bouquet centrepiece on the dining table balances the blue of the chairs.

Shape and materiality are important within this decor scheme as well. Some pieces are quite linear and modular, like the stacked rectangular spinning chrome book shelf in that same light pink, while others are rounded and make of something unconventional, like the circular chandelier over the dining table made from ballpoint pens with blue caps on them that match the blue everywhere else.

Now, to blend the senses of pink and blue even further, the pink plexiglass window actually does more than just look unique within an otherwise stark white wall. It actually also balances the colours in the room by bathing it in a very subtle pink wash when the light hits the wall and passes through the glass. This gives everything inside a lovely rosy tone while still letting the blue pieces pop as they should.

According to the designer, his colour choices were born out of a sense of loyalty to colours that he loves and that have served him well in past projects. He wanted to give each shade its chance to shine but also blend the ones he loves best in one place for even more visual appeal and cheerful atmosphere. The finishes and colours of accompanying details are chosen based on what suits the primary colours he has decided to work with best; that’s why you see more than one rose gold piece here.

Where most houses might tone things down in the kitchen and use it as a slightly more neutral place to ground the house a little, designers chose to do precisely the opposite here. Blue cabinets have been built around and under the appliances and the same with the sink, livening up the whole space more than just about any kitchen we’ve ever seen.

The blue spills over from the kitchen and dining room into the front room, of course, encompassing an impressive sofa that plays once more with materiality and finishes. While the sofa itself is an attention grabbing, easy to clean vinyl, the throw pillows that accompany it are a softer cotton material to make them differ slightly even though they’re exactly the same shade.

Overall, the use of duo-chromatic colour blocking in partnership with the creative pieces by several local artists on the walls gives the entire apartment an atmosphere of cheerful artistic appreciaton and high brow playfulness.

One Comment to The contemporary Apartment in New York, created by Crosby Studios, gives us a stunning case of the blues Share your Thoughts
Show off*

Attic Loft Reconstruction by B² Architecture

Project b95, a Modern Infill in Calgary by Beyond Homes