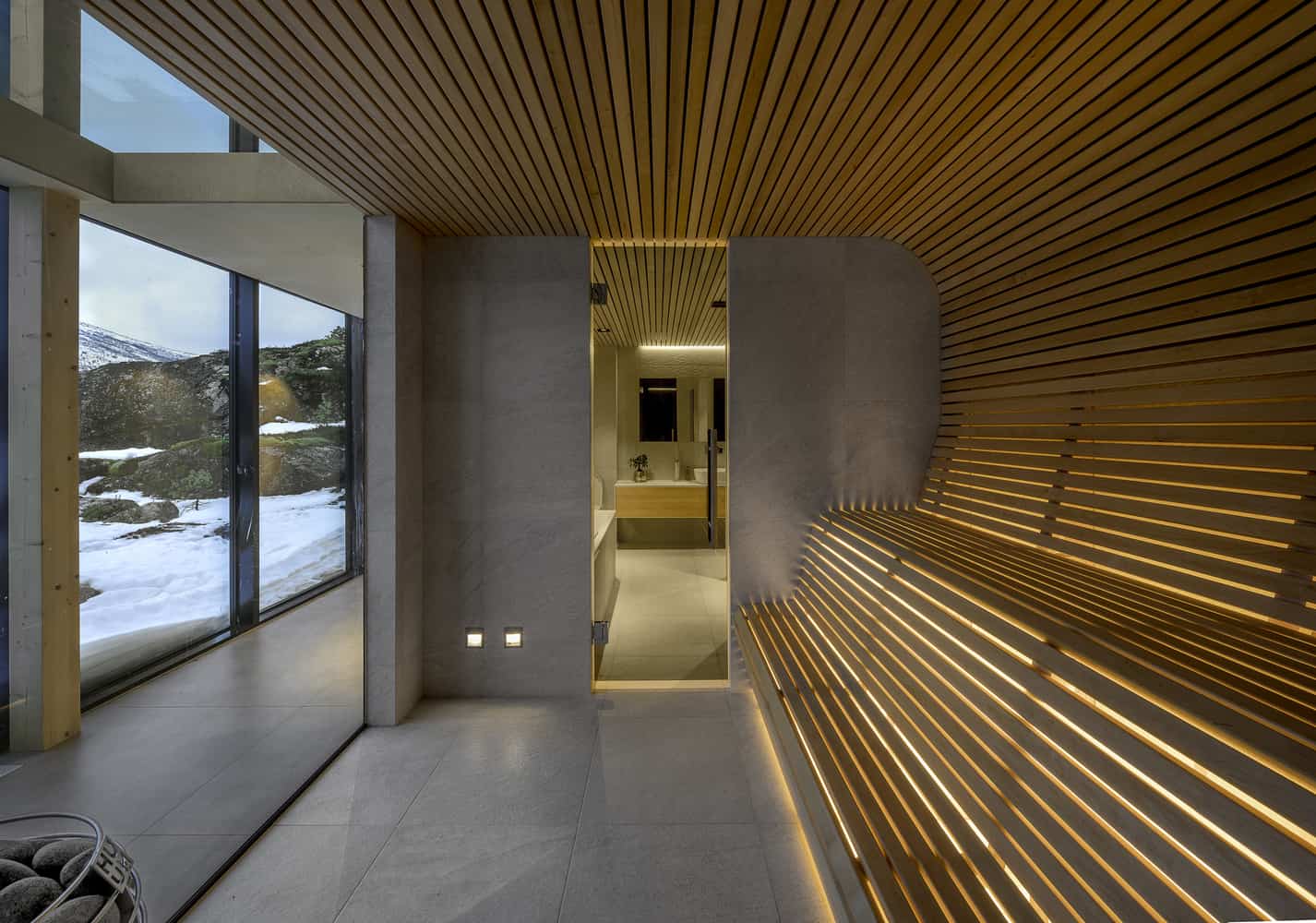 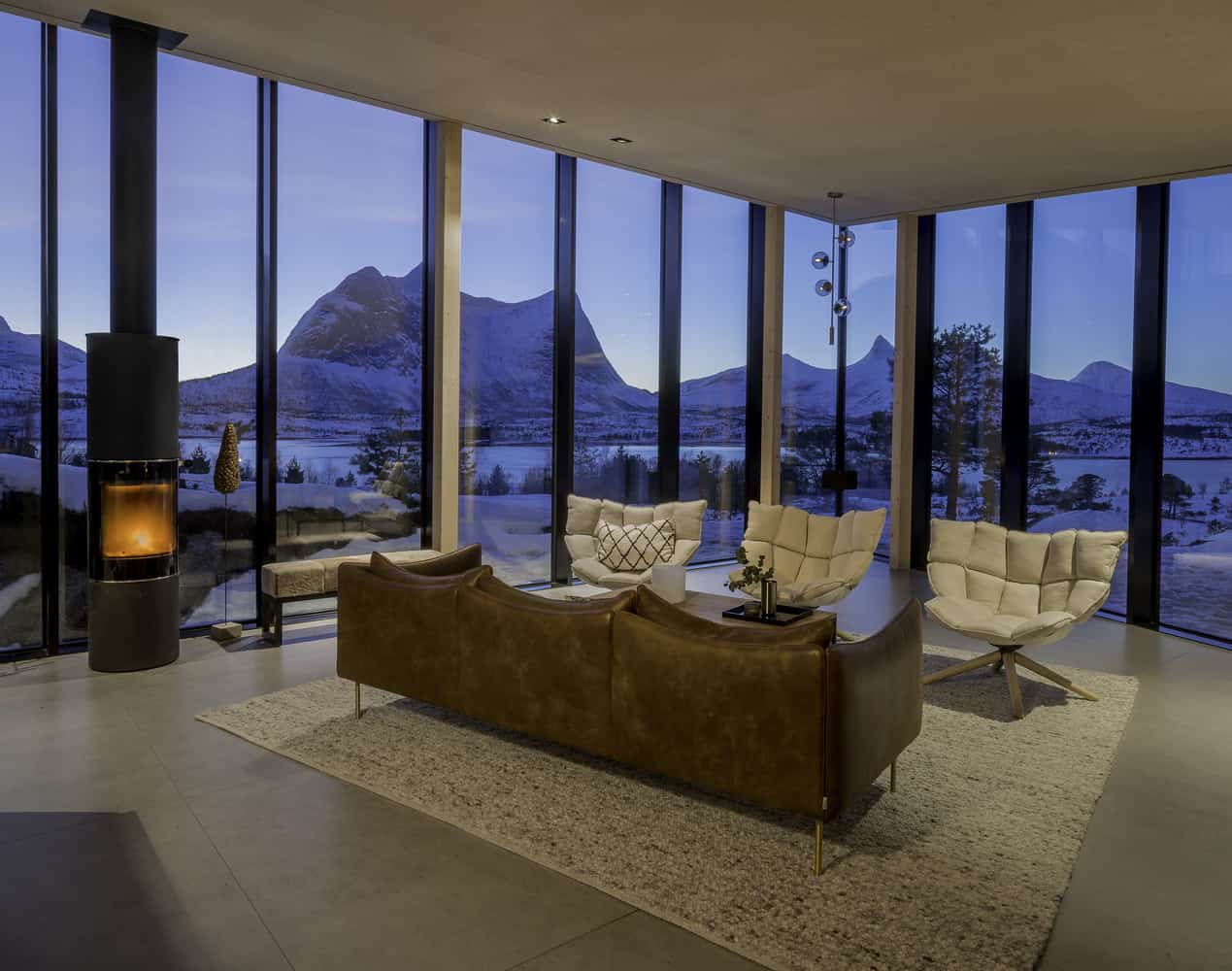 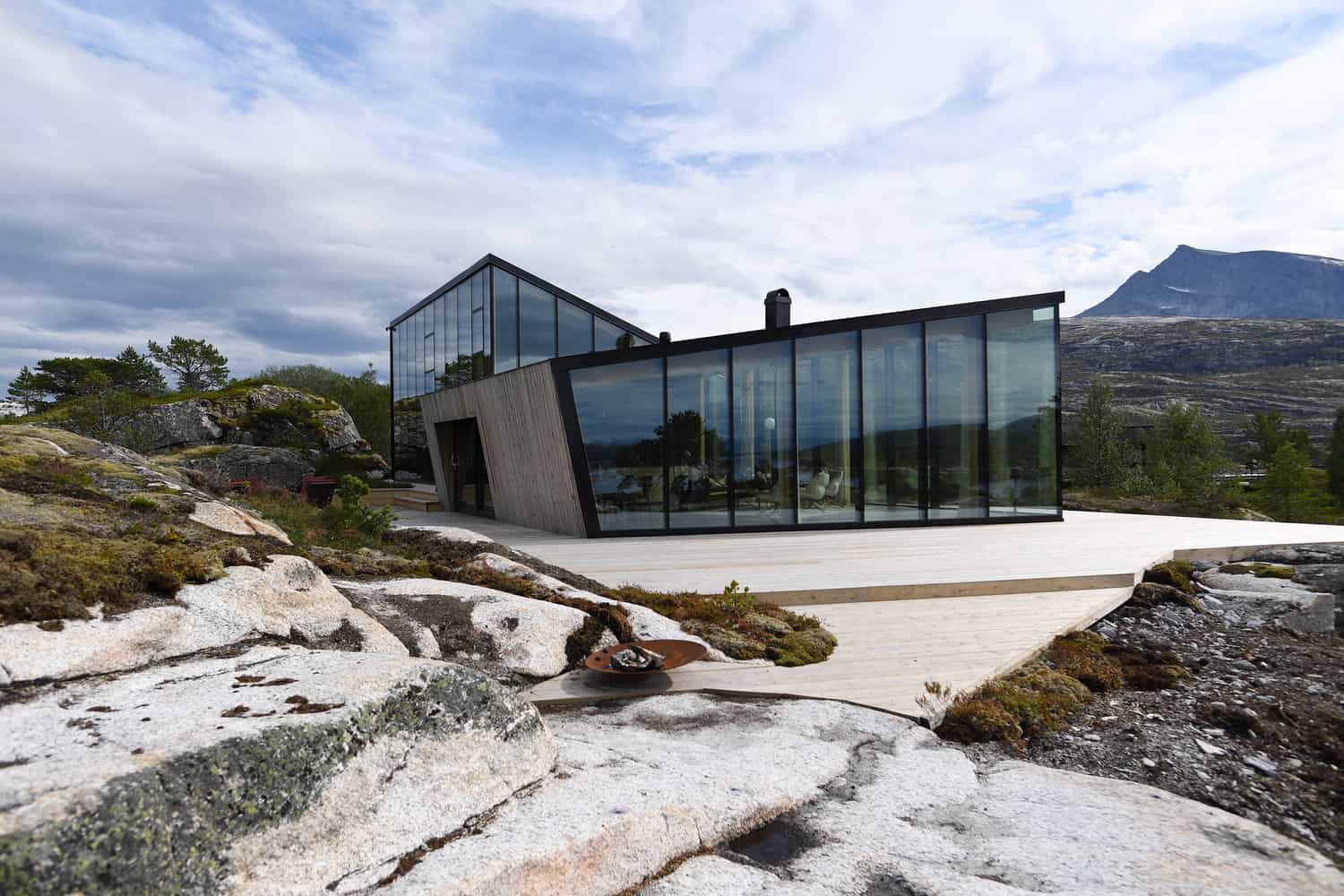 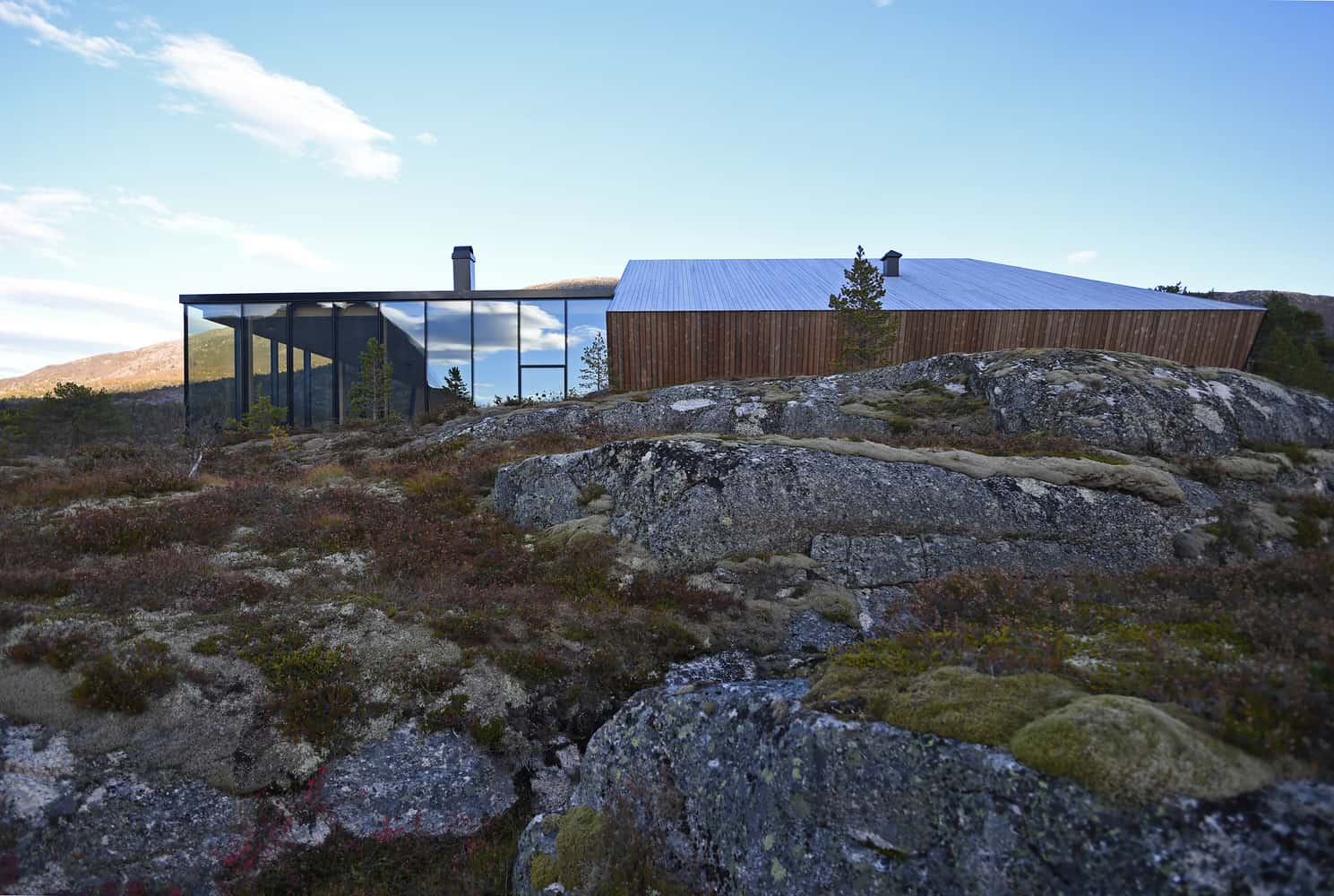 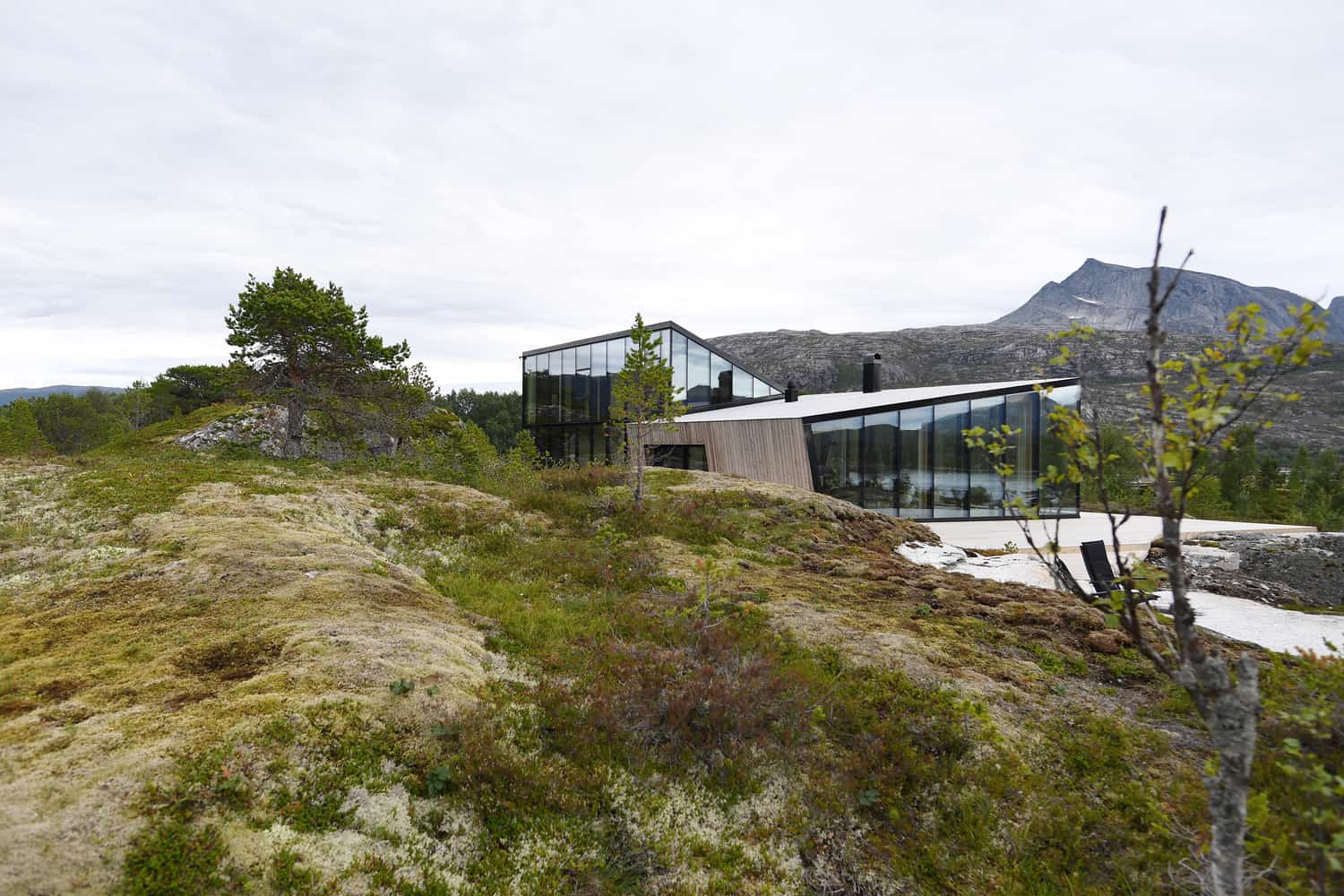 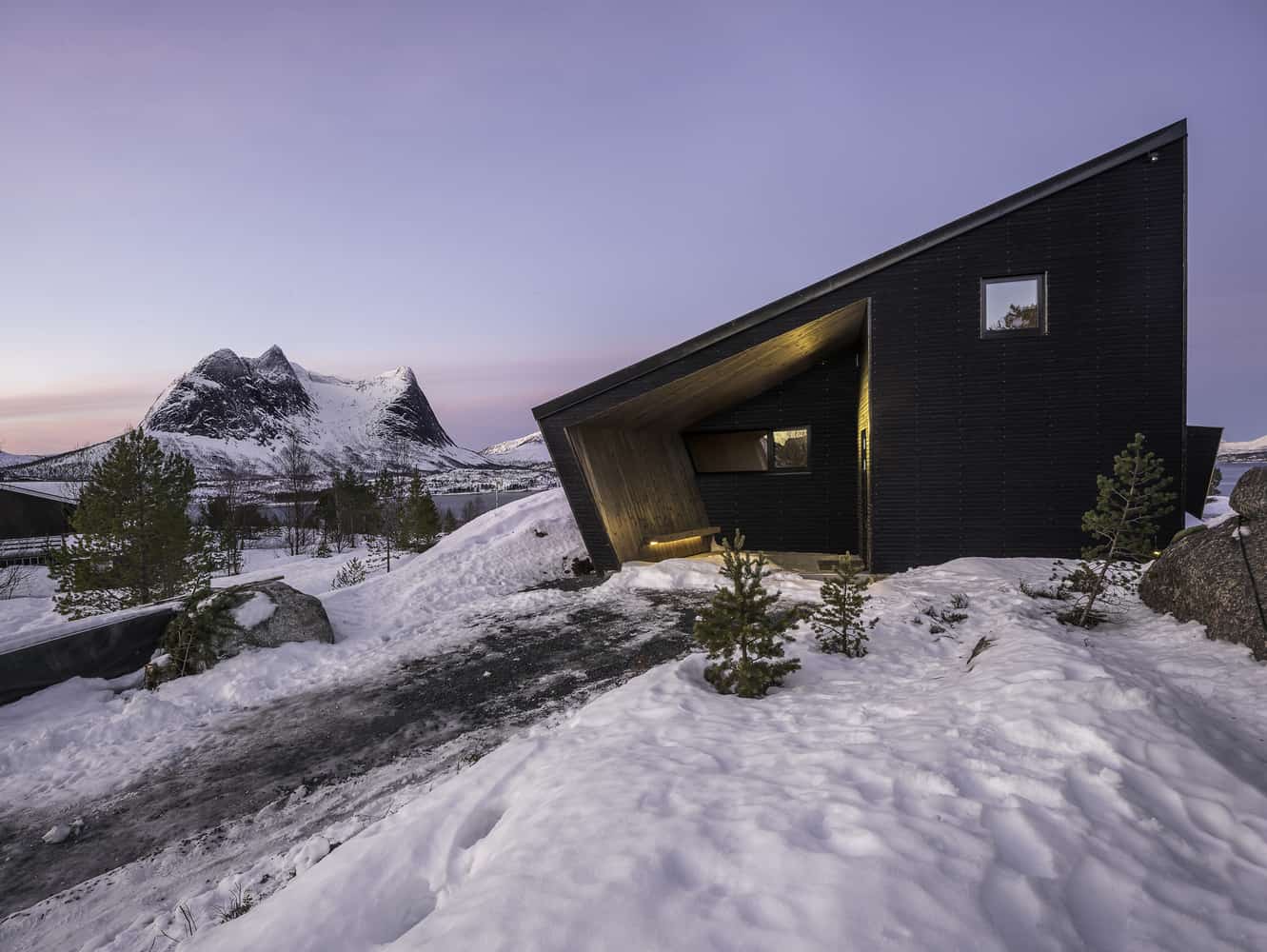 On the Lofoten archipelago in Northern Norway, creative designers have teamed up with esteemed local architects at Stinessen Arkitektur to conceptualize and complete the unique holiday home called Efjord Retreat Cabin. Located in Narvik in Norway, the actual plot on which the cabin sits on a small branch of water right off the Ofoten fiord. It is nestled onto a little island called Halvaroy, on a natural ledge that affords the little home breathtaking views in essentially every direction and from every room.

The natural terrain of the island presented both challenges and opportunities to the design and constructions crews working on the project. In the end, they opted to orient the cabin to the west, giving it a primary view overlooking the wider fiord itself and stretching on towards two of the country’s most challenging climbing peaks.

This particular location might seem a little too far out there for some, but this was precisely the intention of the designers because it was actually the primary goal and desire of the owner. From the outset, the whole concept of the cabin was to provide them with a retreat experience that truly feels as though it has transported them into a place of peaceful isolation and total quiet privacy. As a person whose life is often engulfed by the bustle of big cities and the hectic nature of full time work days, the owner wanted a complete and drastic deviation from that experience for total healing relaxation.

In order to create that atmosphere, designers created a building that has a truly unique shape. The concept here was to build certain parts of the building so they feel as though they open and close in different directions, giving each area within those parts a different feeling, atmosphere, or experience, depending on the owner’s mood or needs at any given point.

For example, the eastern section of the cabin tapers and “closes” towards some neighbouring buildings not far in the distance, limiting views of those buildings (and those buildings’ views into the cabin) for privacy. At the same time, the cabin opens to a large glass wall towards a swooping ridge and some stunning close by terrain right across, creating the feeling that other structures and humans are truly far off the cabin is simply existing amidst calming nature.

The same tapering and expanding, or “opening” and “closing” techniques were built in elsewhere in the cabin as well. Magnificent views are established as a focal point of the main rooms by the way the front end of the cabin appears to open up towards the dramatic sight of the mountains and the flowing fiord below them to the west.

In terms of its layout, the cabin is split into two cohesive volumes that, despite being oriented differently, don’t actually feel cut off from each other. The two volumes do sit slightly offset from one another in order to let their angular edges provide a bit of shade and shelter to some outdoor areas that exist on their axes and ends. This also gives each volume its own end on all sides, letting designers incorporate more large windows with more extremely impressive views for a panoramic feel from anywhere inside the house.

The incorporation of outdoor spaces that blend nearly seamlessly with the indoor ones, as well as the way the cabin sits atop a high point in the terrain but has a clear view of the different surrounding peaks and valleys, makes it feel and look as though it truly fits with its natural setting. The cabin’s particular orientation and height also works well with the movement of the sun, which rises towards the open functional spaces and sets towards the private sleeping areas, letting the owner’s routine flow well with the natural course of the daylight.

The cabin also blends quite well with its surroundings in terms of its materiality. The exterior consists of primarily only two materials: core pinewood and structural glazing. For durability, the wood was treated with iron sulfate; this also gives it an even, pleasant appearance that suits its environment well.

The cabin’s exterior isn’t the only place where wood appears! Inside the house, many of the surfaces are clad in birch veneer, which contrasts beautifully with the granite tile and stone across other details. Inside the sauna and the bathrooms, which were built with relaxation and body healing in mind, the floors and ceilings are also clad in aspen slats.

Photos provided by the architect.