On a peacefully secluded site in Amagansett, in the United States, creative and building teams at Jerome Engelking have recently completed the Wuehrer House; an impressively sized residential home that is surrounded on most sides by stunning nature preserves. Nestled into a clearing in the small Stony Hill Forest, sat away from view of the street, is a large house that can only be accessed by a private gravel path. The plot on which the building sits has a slight natural incline that slopes gently downward. This entire slope, and most of the land at any height surrounding the house, is covered in tall white oaks. The area also, however, features a number of eastern red cedars and even some pines.

In an attempt to pay homage to the area surrounding the house, rather than cutting into it or making the presence of the building look like it interrupts the landscape, designers aimed to conceptualize and build a house that works with the land and suits its immediate context and landscape instead.
View in gallery 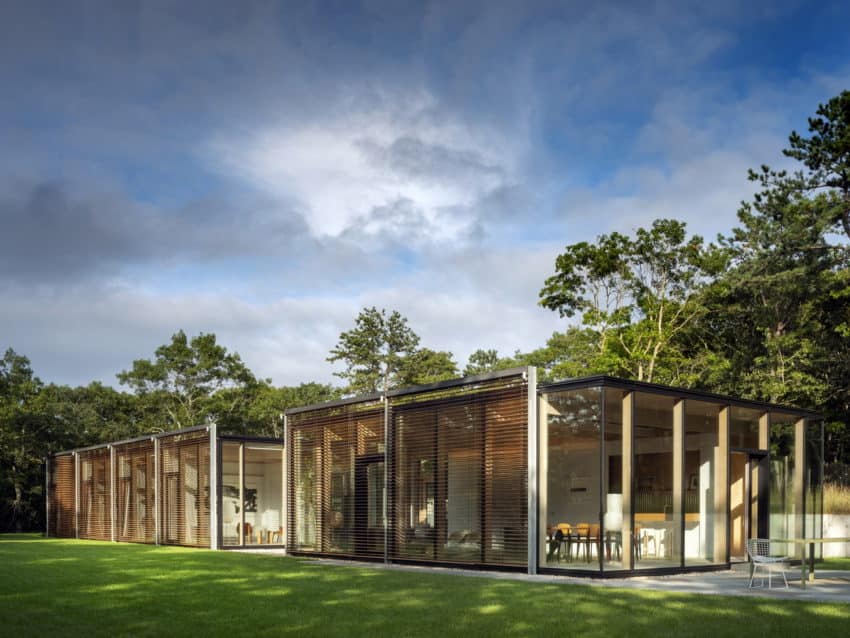 To do this, they used locally sourced materials that make sense with the land, creating a sense of communication between the trees and the building rather than a stark, unappealing contrast. The house is interestingly shaped and contemporary looking in its layout, but the use of wooden slats as a sort of masking blind makes it blend in with the terrain in a way that somehow makes it appear soft and subtle despite its straight edges.
View in gallery 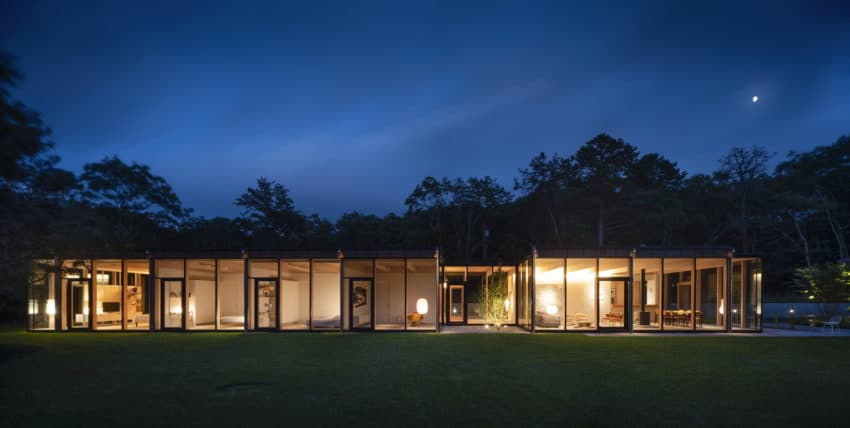 The very thing that makes the house unique, which is its shape, is actually also the thing that helps it blend right into the landscape in a way that suits its natural context. The framing and structure of the house are repetitive and modular, making it look minimalist and stylishly reduced; truly a frame providing shelter amidst the trees rather than a hulking form taking up space between them.
View in gallery 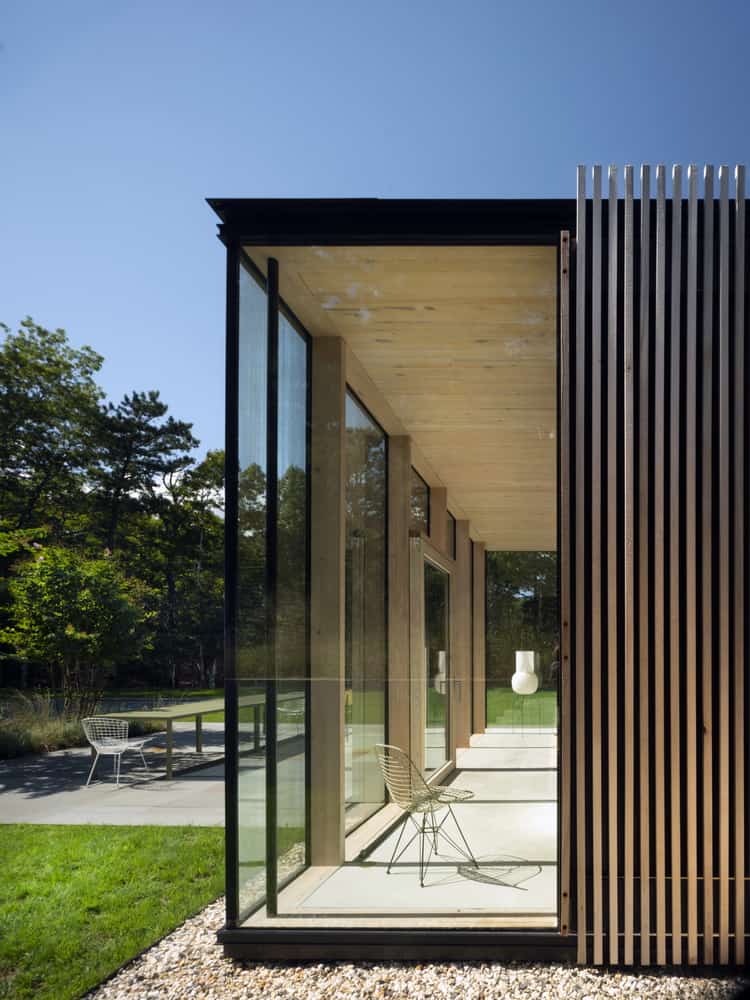 The materiality of the house plays just as huge a role in how well the building fits its natural context as the shape of the frame does. The use of glass, untreated and very natural looking wood, and concrete keep the house natural like its location, amplifying the goal to make it simple and minimalist.
View in gallery 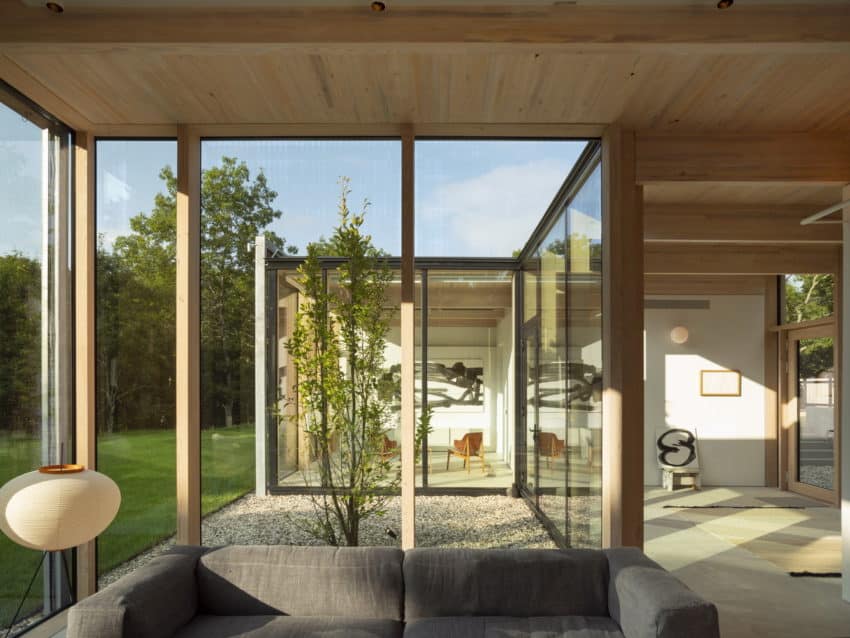 Besides the way it looks, one of the best parts of the structure and shape of the house is the way it lets in so much natural sunlight. This makes the house not only more energy efficient thanks to passive heating and cooling, but also more cheerful and airier feeling on the inside. Light floods into the open concept spaces, helping define parts of the house in a way that a slightly more closed off home layout doesn’t get to experience.
View in gallery 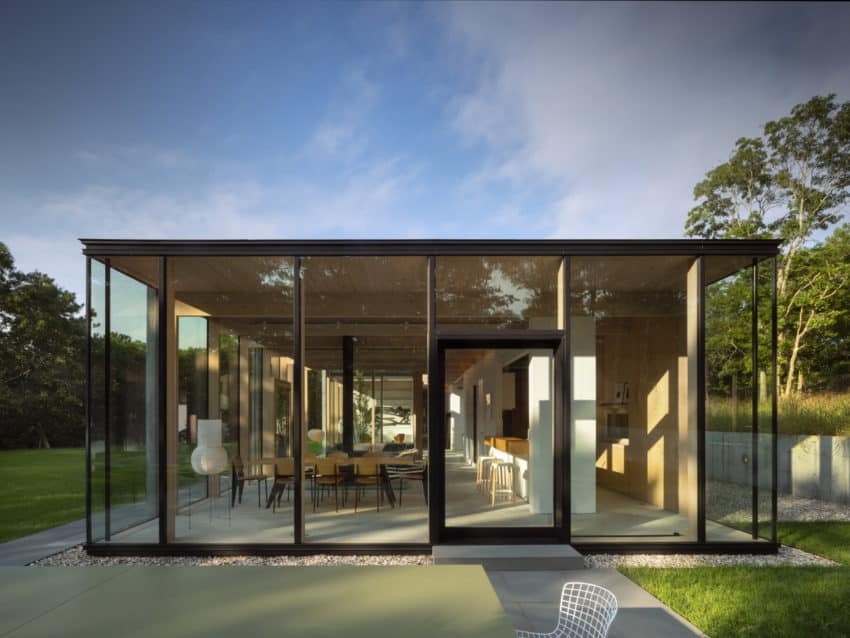 Inside the house, the same wood that was used in the exterior slats follows you through the front door and ground the inner spaces into that same pleasant and natural but minimalist aesthetic as you saw from the doorstep. This souther yellow pine lines the inner frames, most of the floors, all up the walls, and all across the ceilings, creating a calming and rather beautiful monochrome effect that’s just as bright and appealing as the level of natural sunlight in each room.
View in gallery 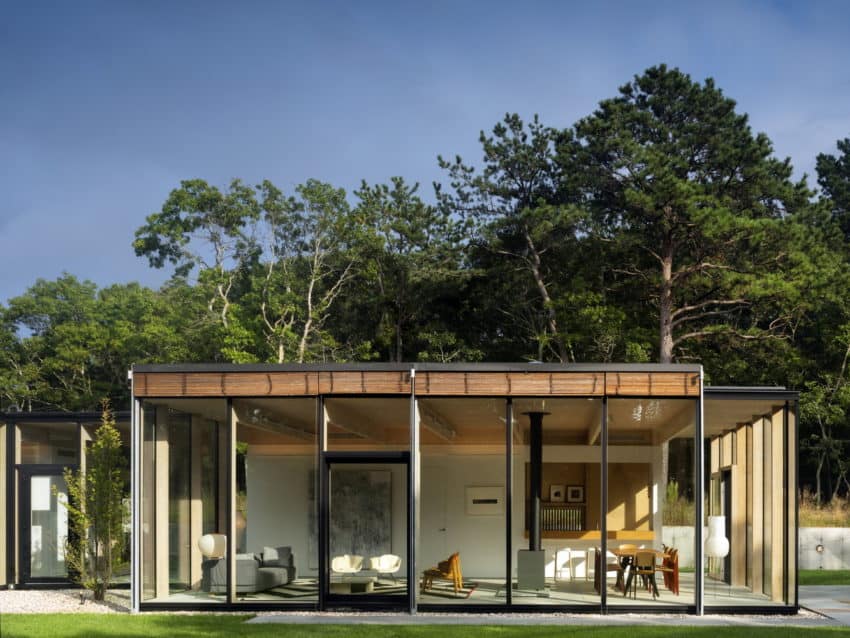 In an attempt to keep things minimalist, designers chose very mod looking and uniquely shaped furnishings that speak for themselves and draw attention with their mere form. The fact that they very pieces providing surface and comfort in each room are eye catching in themselves makes the need for other decor nearly extraneous.
View in gallery 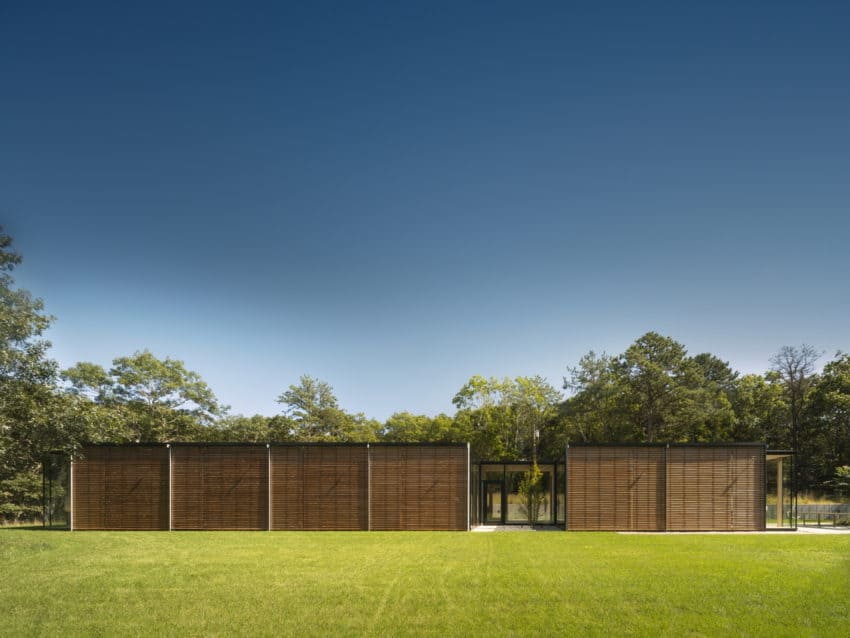 The panels on the outside of the building do more than just block or welcome light and camouflage the house as though it grew right from the forest ground. When the panels are closed or opened, it also shifts heat levels and therefore energy usage in the house, making the whole structure lower impact on the environment in the way it runs.

Casa Puebla built by rdlp arquitectos to harness the beauty of a local volcano, like an architectural tribute