Completed in 2008, this contemporary boutique hotel is a restored tower at the top of a hill in Montone, Italy. 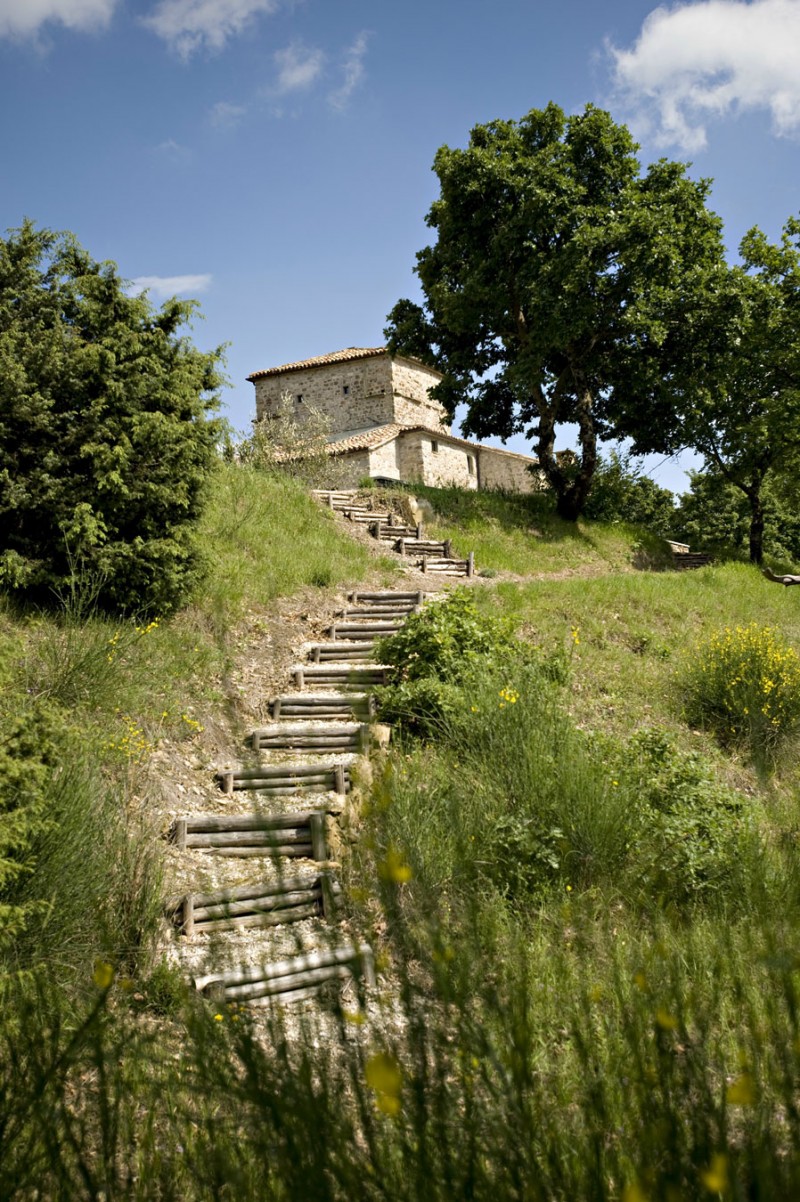 “In the heart of Umbria, near Perugia and half way between Gubbio and the medieval village of Montone, is the Tower of Moravola. Built on the top of a hill (450 a.s.l. and about 10 km form Montone), it overlooks the Carpini valley. It has been completely renovated and is now an exclusive “boutique hotel”, an almost mystical place where time seems to have stopped. On entering, visitors are pleasantly surprised by the very modern architecture and furniture and the luxury of expensive materials and designer items, discreetly lit by diffuse lights. The Tower of Moravola has been included in the “Hot List” of Conde Nast Traveller and in the “Top Ten” destinations selected by Tablet Hotels for its most demanding travellers.

The renovation
Two cosmopolitan architects (one Scottish, one British and both from Hong Kong) renovated the Tower of Moravola and transformed it into their home and a hotel. “It was in a very poor state” explained Seonaid Mackenzie, the Scottish owner and designer of the tower “so we decided to save it. We had no doubts on how to proceed, using modern solutions such as cement, iron and glass to buttress the stone walls and wooden roofs”. The old tower was emptied almost completely and is now crossed by light staircases and metallic platforms, which connect the common areas to the entrance of the suites. “The tower”, explains Mr Chong, an architect, “was restored with a modernist approach which made it suitable for the way we wanted to use this building. We added extra rooms and swimming pools because we wanted to create an elegant retreat with modern luxuries. The tower is surrounded by four terraces. Beyond the terraces are six hectares of fields and oak woods, olive groves and fruit orchards. We also aimed at achieving energy efficiency. The pools are heated with solar panels, which supply the energy for hot water and heating. There is a system to collect rainwater and use it for irrigation”.

The interiors
The completely vertical layout of the building forced the designers to arrange the six suites and one double room on four floors. The common areas are on two floors and are at the centre of the tower. The reception areas (which are connected) are on the first floor and the kitchens and eating halls are on the ground floor. The suites (on two floors) have modern-style furniture and great attention is given to detail. The Main Suite is very large and full of light. It has a living room with a high ceiling, a stone fireplace and a fantastic veranda, as well as a bedroom with a magnificent view of the Carpini valley. A changing room leads to a private terrace with a wellness area and a massage area”