This contemporary home by Campuzano Architects is a 2012 project that is located in La Calera, Colombia.

The outdoor spaces have a ship-like design with upper and lower “decks” that allow occupants to enjoy 360 degree views as well as intimate alfresco living. 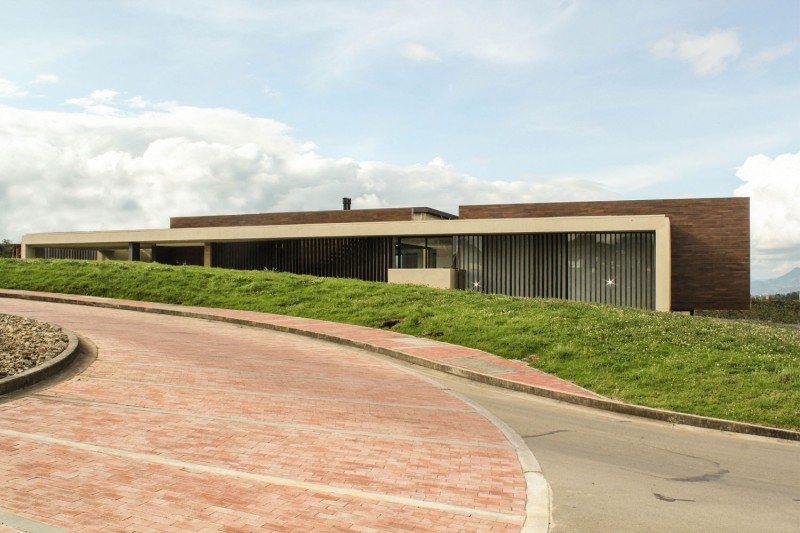 “Located in the municipality of La Calera, nearby Bogotá city; the AR HOUSE was implanted into a sloping ground and a triangular shape plot. Nevertheless, this particular feature lets the house enjoy from the eastern mountain range, as the closest view, to the far view of the Sopó Valley.

The main spaces of the program were placed in a longitudinal scheme with the purpose of link them with the farthest view.
At the same time, the access floor has been bored in its centre with a courtyard, where a water surface takes place too.

Through this external space, the social level and the roof are connected, in which is also possible to enjoy a 360-degree view of the surroundings, like a ship.  So, the courtyard becomes the core of the house, improving lighting, warming up the indoor spaces, bringing the sky to the ground by reflections on the water and finally, taking the outdoors inside of the built spaces.

Furthermore, the building form takes advantage of the topography. This condition allows locating below the social spaces and the access level, the secondary bedrooms, an office and a spa; connected directly with the private backyard in terms of use and views.

From the street, the house seems like one floor high volume.  Between the courtyard and the view of the private backyard, the social areas were organized in an open way.

The living, the dining area and the kitchen; are integrated in one space, generating transparency in all directions. Over the basement, a cube rest in a cantilever where the main bedroom and its private terrace take place. This cube was inserted to the interior of the longitudinal volume, forming the courtyard and the roof terrace bounders.

Regarding some climatic conditions, the predominant winds come from the southeast. However, these conditions change throughout the day.

The fabric of the south façade made of a concrete frame, glass and a rusty steel latticework; protects the house of the predominant winds.

This also has privacy purposes; it reduces the view of the internal spaces from the closest neighbours and the access road. Likewise, the dug land was used to flatten the backyard and shape slopes that protect the house from the wind and the view from the outside.

The green roof has been a main feature of the house as well; the principal idea of it is to be used as a thermal insulation, providing better internal conditions regarding internal temperatures.

On the other hand, it is part of the landscape design. The monochromatic and austere materiality of the house, improve spatiality, lighting and relations between indoors and outdoors, which are  the protagonists.”

Photos by: Gabriel and Carlos Campuzano

House in Brazil with Spaces Open to Nature