House FFL is a private home located in Préverenges, Switzerland.

Completed in 2014, it was designed by Ralph Germann Architectes. 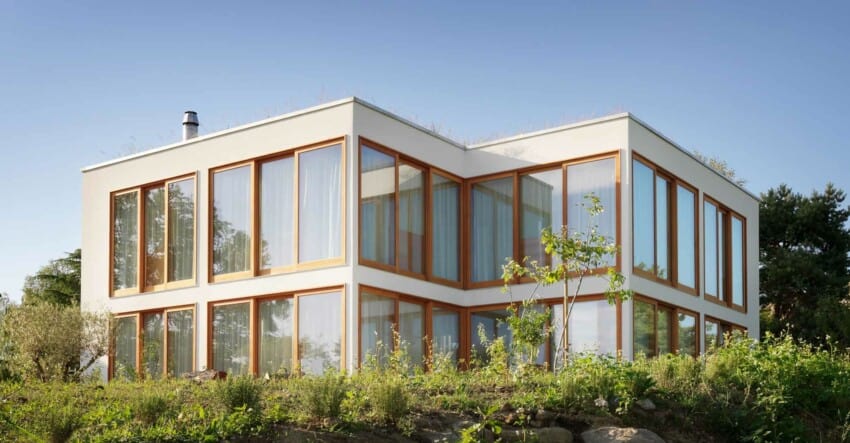 “The house FFL consists of two nested squares of eight times eight meters (26 x 26 feet); thus creating two outwardly open “yards” of four meters (13 feet) each side. In each of these courtyards trees were planted: birches at the entrance and a cherry tree in the patio. The natural garden that follows the ideas of permaculture, played a central role in the design of the house. The client wanted “An open modern house surrounded by green luxuriance”.

The principle of openness is also visible in the interior design of the house. In the lower floor there are doors only to the guest toilet and a sliding door to the pantry. Also, the upper floor with the two children’s bedrooms, the master bedroom, the office, the guestroom and the two bathrooms works as space continuum. The few doors are rarely used.

Instead of bringing with balconies restlessness to the facade, wooden handrails were fitted directly into the three bedroom windows. These are of larch wood, the same material as used for the floor and the window frames

The floor upstairs was only lightly oiled, the window frames remain untreated and will get in time from the outside a grayish patina. Downstairs the flooring is a relatively crude poured concrete, a contemporary version of a terrazzo .

Simplicity is also the keyword for the furniture. The dining table and kitchen were designed by Ralph Germann architectes.”