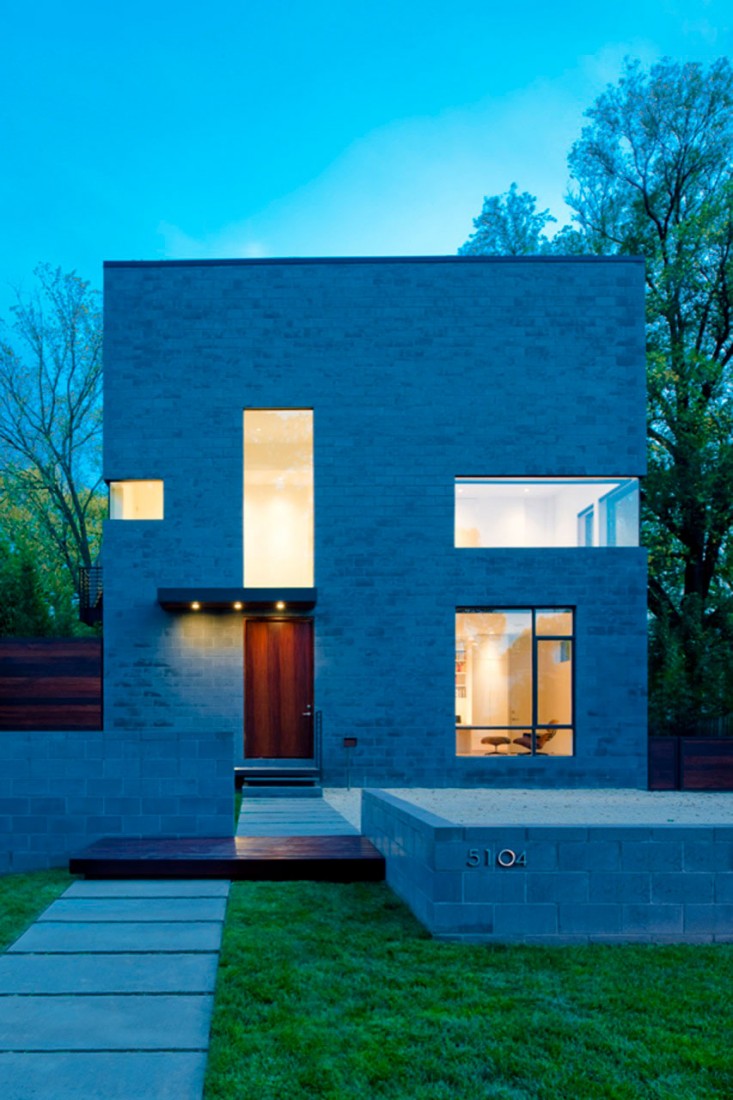 “Edgemoore is an affluent neighborhood in Bethesda, Maryland, a suburb bordering northwest Washington, DC. Mature trees and gardens line the streets of this neighborhood, within walking distance of downtown Bethesda.

Too often lately, many of the perfectly scaled houses inhabiting this neighborhood are being torn down and replaced with Craftsman style houses on steroids and pseudo colonials far too large for their lots. Most of these new houses are built to the maximum size allowed by the zoning ordinances with little regard for the scale of adjacent structures. Sites are rendered treeless, leaving little or no green space. These houses seem egregious, insensitive and irresponsible.

The client for this project was a young, forward thinking entrepreneur with no desire for a nostalgic or revivalist style house. He desired a house that was efficient with a minimal footprint, leaving the majority of the lot unoccupied by building and hardscape. The close proximity to a more urban downtown Bethesda warranted a house designed with closer ties to an urban area than to the rural countryside that once informed the design of houses built in Edgemoore.

After much deliberation, it was decided to remove an existing, inefficient structure and replace it with a new one. The new house occupies one third less area than the original structure and is sited to maximize green area on the property. Designed as a cube, the new house is approximately 2200 square feet with no unused or underutilized spaces. The flat roof provides an additional 1100 square feet of outdoor living space with views of treetops and the downtown Bethesda skyline.

Fenestration in the ground faced block walls, composed of varying sized rectangular and square openings, is arranged to optimize views to the green spaces while minimizing views of adjacent houses in close proximity. A series of landscape walls orchestrate the relationship between the street, required parking court and house. Interior spaces are open and light filled with crisp detailing. Walnut flooring provides a rich base for white walls and millwork, designed in juxtaposition to the charcoal gray exterior walls.

This house represents a deliberate departure in both the thought process and the realization of current building trends in the neighborhood. Instead of building a large house with pretentious ties to the rural past, this new house is smaller with a stronger relationship to the modern, urban area that Bethesda has become. The house is intended to be more site sensitive, environmentally conscious, and to provide comfortable, efficient living spaces.”