Copenhagen Penthouse I by Norm Architects

Built as a home retreat for a Danish couple living in Spain, this penthouse apartment features a calm, minimal interior and a large rooftop terrace. 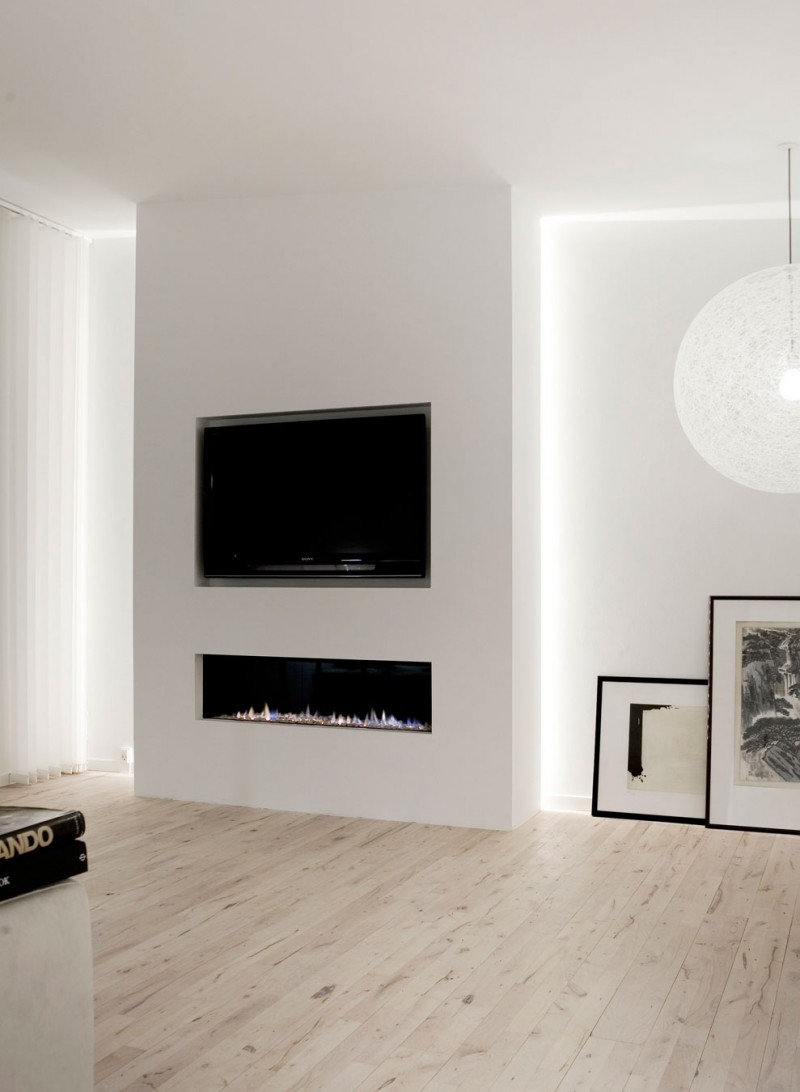 Copenhagen Penthouse I by Norm Architects:

“The basic idea for the renovation of this Copenhagen apartment was to create the feel of a private hotel suite for a Danish couple living in Spain.

As the owners travel a lot, we wanted to create a calm and pure structure that was ideal for relaxation.
Everything but the floors and the main structure was redone and we used the existing elements to create niches where we installed hidden lights. These built-in light niches gave a clean and simple interior that needed a minimum of furnishing, lamps, etc. With all the lights being dimmable it also allows the owners to create the right cosy atmosphere that fits the often grey skies of Copenhagen.
With an intelligent Home Control System they can control the lights in the whole apartment, turn on the fireplace and the air-condition with a single touch on their Iphone, as they set foot in Copenhagen Airport.

The rooftop terrace, that is almost the same size as the apartment, was completely redone in a minimalist wooden structure that allowed a Japanese inspired grass garden on the top of the concrete building overlooking the Copenhagen skyline.

Hall
The main idea in the hall was to clean up the structure and use the irregularities to build floor-to-ceiling closets and place tall mirrors to extend the feeling of width in the narrow hallway. As in the rest of the apartment build-in spotlights from Modular was placed in the ceilings to keep the walls bare. We removed the door to the living room in order to be able to view the full length of the apartment.

Office
The main idea in the office was to extent the feeling of length as well as create a relatively large working top, allowing both of the owners to work with their laptops side by side. We designed a lamella structured tabletop that has the structure to extent from one wall to another with a span of more than 3 meters without touching the back wall. This gives a sense of a free flowing structure and gives space to wires etc.

Bedroom
An irregularity in the existing architecture was used to create a Japanese inspired “Tokonoma” above the bed with bulid-in lights from Agabekov. The small wall mounted side tables fit exactly one book inside and underneath you have switches to dim all the light effects in the whole room to create just the right atmosphere. The lights can also be programmed in different scenarios in the whole apartment, so that you can create a certain atmosphere with a single touch. The lamps from Bestlite are wall mounted throughout the apartment. Opposite the bed there we created a small niche with closets and sliding doors with no frames. A bench at the foot end of the bed was designed to match the side tables.

Bathroom
The idea with the light scenario in the bathroom was to illuminate the structure of the stone with the hidden lights from Agabekov and create the drama with the spotlights. A niche is carved in to the wall above the sink and lights are placed behind the mirror that is flush with the wall, giving the same effect as theater mirrors for putting on make-up. The clean white lines are softened by the use of a travertine sink and a dark wooden latter for towels.”

A White House in Copenhagen by NORM Architects