This 2011 project is one of two offices, designed by Za Bor Architects for one of Russia’s largest IT companies, located in Saint Petersburg, Russia. 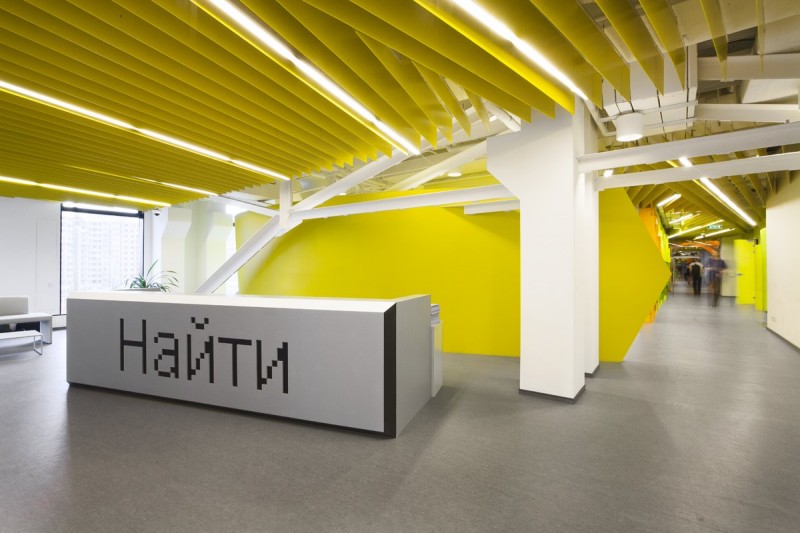 “It is indicative that this office is to some extent a return to the roots of cooperation of za bor architects and the largest Russian IT-corporation Yandex.

The first office developed for Yandex by za bor architects is in the same building of the Benois business center in Saint Petersburg, but on a lower floor.

In 2008 it was a brilliant premiere published by almost all the leading architecture and design media in Russia. The project has picked up many awards.

Four years later za bor architects and Yandex had decided to repeat the success on a larger scale – Yandex Saint-Petersburg office II is almost twice as large as the previous one – it houses the entire fourth floor of the building and has a corridor about 200 meters long (total floor area 3310 sqm), but size doesn’t matter, clients wanted an «extraordinary office like no other»

So the architects had at least two challenges – first to organize a very complex space outstretched along a central corridor axis. The second challenge was to make the office a showy and impressive.

After a long thought  Peter Zaytsev, and Arseniy Borisenko, the project architects, decided to use the double loaded zoning, with meeting ‘cells’, work areas, and unusual objects located along the corridor.

The unusual objects being provided with a particular function. As a result of this concept implementation, guests find themselves ‘inside’ the Yandex  search service: at the reception they are met by a well-known ‘Search’ button and a yellow arrow (an unofficial Yandex logo and a significant part of the web-site).

While passing the corridors they see the familiar user name and email password input boxes, and at each step they meet symbols and icons of Yandex services, although they are not always easy to recognize as tiny pixel icons, had turned into 3D objects.

The office guests receive a unique transcendental background, the one of which Aldous Huxley hadn’t even dreamed of.

Visitors find themselves both in an amazing space which architects had transformed from linear into 3D, observing the pixel objects which grew to gigantic proportions.

Thus, according to the architects conception, guests and employees of the office are involved into Yandex net services, to which they are accustomed to work with exclusively in 2D screen.

That is why in some places miniature ‘icons’, which grew to giant size are breaking to large volume «pixels» sprouting from the walls. Bright colors, spots scattered here and there, guide visitors through the office and cheering up the office staff.

Speaking of function, many of the major elements seem to be decorative only at first glance. The spiral elements for example are separating the informal communication zone from the corridor. The casted polymer ‘jellyfish’ clocks contain network printers station, etc.

The project has turned out rather complex, the first thing because no one did such things before, not only in Saint Petersburg but even in Russia. Therefore, many solutions are made on the spot during on-site designer supervision.

The difficulties were not caused by 3D objects – they are made according to advertising designs technologies (their cages are filled with polystyrene foam, meeting all standards of fire and environmental safety). On the other hand – the ceiling, build up of original «blades» was extremely difficult to install.”