The home, with large windows on the walls and ceiling, blurs the boundaries between outdoors and indoors. 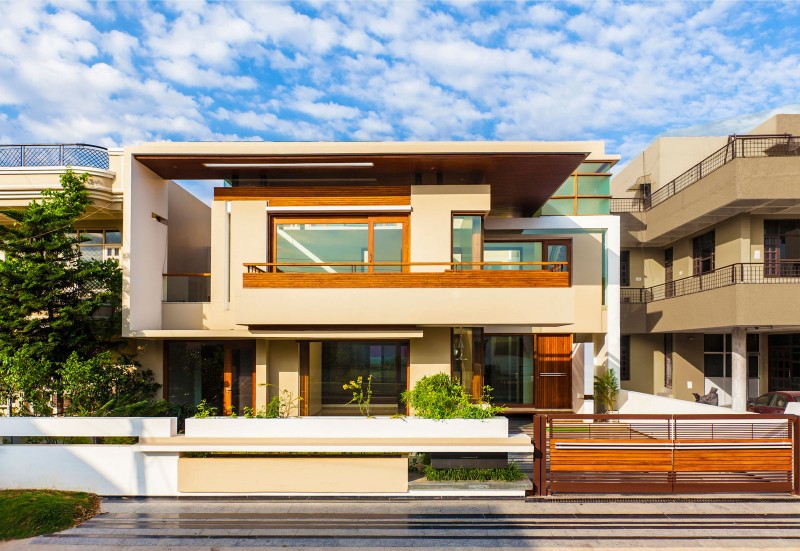 “The house is an attempt to blur the boundaries between exterior and the interior of an urban house. The concept of the house is an illustration of a metamorphosis of eastern spatial interiors and western aesthetics. It was designed for two brothers, on two separate levels yet connected without exposing oneself to the harsh weather conditions.

The residence utilizes the concept of two cross axes- a vertical axis through the plan which is the central circulation axis for the ground level and it links the house visually from the front to the rear boundary wall and a horizontal axis which connects the two landscaped courtyards creating a vision across the width of the plot. It is at one end of this horizontal axis that the main entry of the house is positioned. The individual enters on the horizontal axis and then is released onto the vertical axis. It was the client’s desire to have a luxurious home; thus, it was a concern to expand the constraints of a small plot and make the site and consequently the house appear larger. Therefore, the cross axes play an integral role in achieving the same.

The main staircase upto the first and the second floor is placed right next to the main entrance so that it lends the required privacy to the residents of the ground floor. At the very same time, the visual connection of the staircase is retained with the house on both levels as it looks on the courtyard next to the main entrance of the house, with long vertical glazing running along the staircase.

An earthen palette of materials has been selected to allow for the emphasis of natural elements in the house. Rough textures of stone and cobbles have been used in most landscape areas including the central and the rear courts. Extensive use of wood allowed for the necessary warmth in the interiors.”

StudioPietropoli Designs a Private Residence in a Quiet Neighborhood of Padua, Italy