This modern house is a project by Seinfeld Arquitectos  that is situated on a desert slope near the coast of Lima, Peru.

It is a three level residence with a layout that flows in an upward spiral and features two spacious terraces. 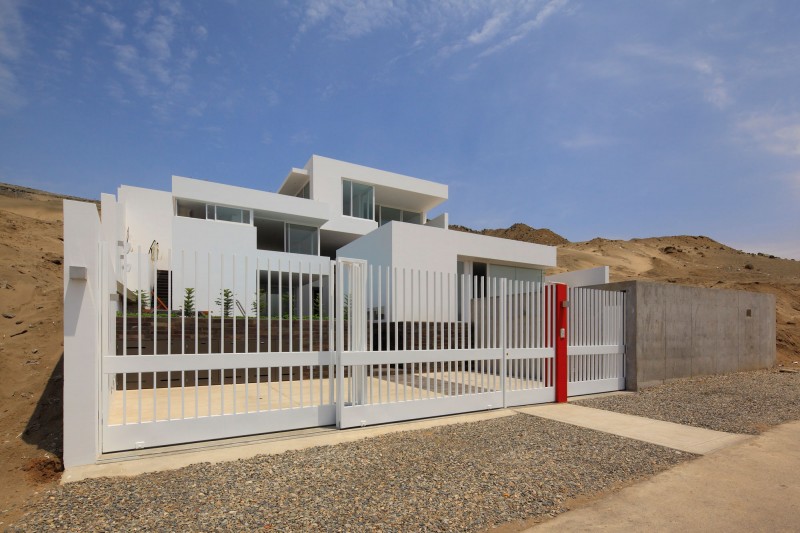 “The project is located on the coast of Lima, in a desert area and in steep terrain on the hill. Due to the entrance from the bottom, we had to dig some of the ground to fit the project.

Nevertheless, in order to adjust to the topography as well as possible, we first generated a base that could also allow us a better visibility from the lower level. We placed the pool here to accompany the entry route to the first level.

We worked the empty space resulting from displacement of three volumes as the space generator of remaining spaces and vertical circulation.

The three volumes grow in height in a spiral manner so that one serves the other as a large terrace. That is, one volume reaches a high level, the other two and finally the last one, three.

The first volume, the lower one, houses the child’s bedroom with its living room, its roof is the terrace of the room which is located in the three-level volume of.

At the top level of the latter, we find the master bedroom and its terrace is the roof of the two-level volume that houses secondary bedrooms in the first and the kitchen and dining room on the second.

The house runs on a spiral from the inside, vertical motion accompanies this direction and moves through spaces so as to circle the inside of the house.

The views are carefully worked, leaving the corners always released because the coastal view is seen diagonally from the house.”

The Panda House by DA-LAB Arquitectos