It was designed by Andrade Morettin Arquitetos Associados in 2008. 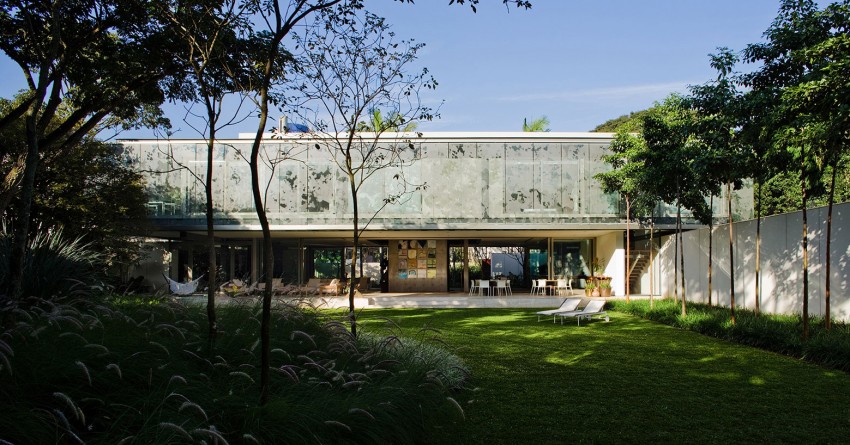 “This house, located in a green residential district in the city of São Paulo, takes advantage of its privileged condition, turning its integration with the nature into its distinctive trace. All its spaces maintain a clear relation with the 1,500-square-meter (16,145-square-foot) park in which they are inserted.

On the ground floor, the social spaces are located under the shade of the upper volume of the house, connected to the gardens through a terrace and the glass sliding doors – that can be totally moved to the side, creating a 14-meter (46-foot) opening. The upper volume, conceived as a translucent box, shelters the rooms and other spaces that require greater privacy.

The structure of the glass volume was conceived in such way that it seems to float above the garden, supported by the central pillar made of reinforced concrete, that also shelters the main staircase to the upper floor. The connection between the horizontal plans and this supporting pillar is strengthened by the creation of voids around the box of concrete, which are also used to bring natural light from the roof to the interior of the house.

The upper volume is closed by a skin made of silkscreen-printed glass that works as a filter of sunlight. The print that composes the silkscreen works as a reverberation of the image of the park on the surface of the house, strengthening the interdependence between the architectural object and nature.”