It is located in Pichincha, Ecuador. 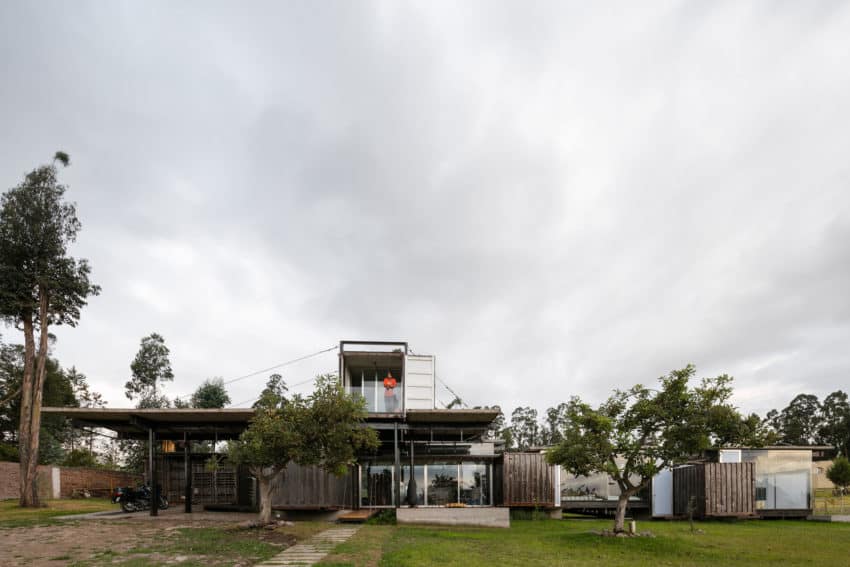 “The projects in which we get involved come as an answer to the understanding of all parties and to the singularities of each particular environment. Our intention is not to look for predetermined solutions, so the ideas for this house are born from wishes, experiences and the clients’ ways of living.

When the owner was a little kid, he wanted to decipher the mechanisms of old clocks. His passion for mechanics drove him into motorbikes and Land Rover cars. He was interested in a very didactic, utilitarian and dismantable house (in the understanding of the pieces in the manner of the mechanics of these vehicles). Constructive solutions had to be visible, no matter their manufacture. When we understood this direct connection to metal, the idea and the desire to live in a container house appeared. One of the main reasons to experiment with this material was the energy saving. These objects become waste after their life cycle (there are so many in the world that it becomes a problem). When changing their function and making them habitable, not only are we giving them a new use but we are also building in a clean manner. Design wise we worked towards simplification using only the necessary pieces.

Seven 20 feet containers and one 40 feet container arrived, later, to La Morita (Tumbaco) from Guayaquil. These units should help assemble a unique housing, located in a big green, fairly flat area and disconnected from the city’s mundane noise.

Containers are imperfect. They keep all their scars as a legacy to their dent register and history of uses. These objects were conceived as the complementary spaces of the house: storage rooms, bathrooms, closets and kitchen. They are basically used in their natural state. It was at this point that we considered to not change their original structure and in case of doing so, finding the responsible justification to intervene. By doing so, modifications were strategic and linked to lighting, air circulation and connection between exterior and interior spaces.

With the intention of showing the essence of the material, factory paint was removed to the exterior (visible metal), whilst a neutral and sanitary nature guided by the colour white was kept at the interior. Works on the floor would be done later, keeping its original wood.

The first one related to the melting of the platforms, some rectangular basis of polished concrete, strategically laid out and organized along the topography in the manner of small functional stains. Due to a slight variation in the levels of the land’s longitudinal cut, platforms outstand as less as possible from the highest ridge, turning into small blurry island in sight.

The second phase was the assembly, alignment and moorings of the containers to the concrete platforms with a mechanical crane. In all cases, containers are supported on top of the concrete, slightly flying towards the exterior, offering a sense of balance and weight control. These pieces are set apart from each other with the intention of creating and delimiting habitable spaces and at the same time constitute the vertebral column of the house on which the roofs are settled.

The third phase relates to the positioning and soldering of the metallic beams system. These beams cross from container to container and help in the reinforcement of the concrete tiles.

Lastly, the fourth phase consisted on lowering a system of cables and beams from the roof which helps to give form to the bedrooms, where wood is the main material.

The house keeps a very strong connection with the exterior (green area and mountain) and all spaces in between containers are a sort of lack of material where the only noticeable elements are the metallic frames with the glass.

Three mechanical systems were designed to transform the use of spaces, a manual elevator to go up to the second floor, operable shutters placed in the bedrooms and a flexible floor in the master bathroom which folds and unfolds to discover a bathtub. All these solutions are like a game that allows the user to be a part of a style of architecture thought specifically for them.”