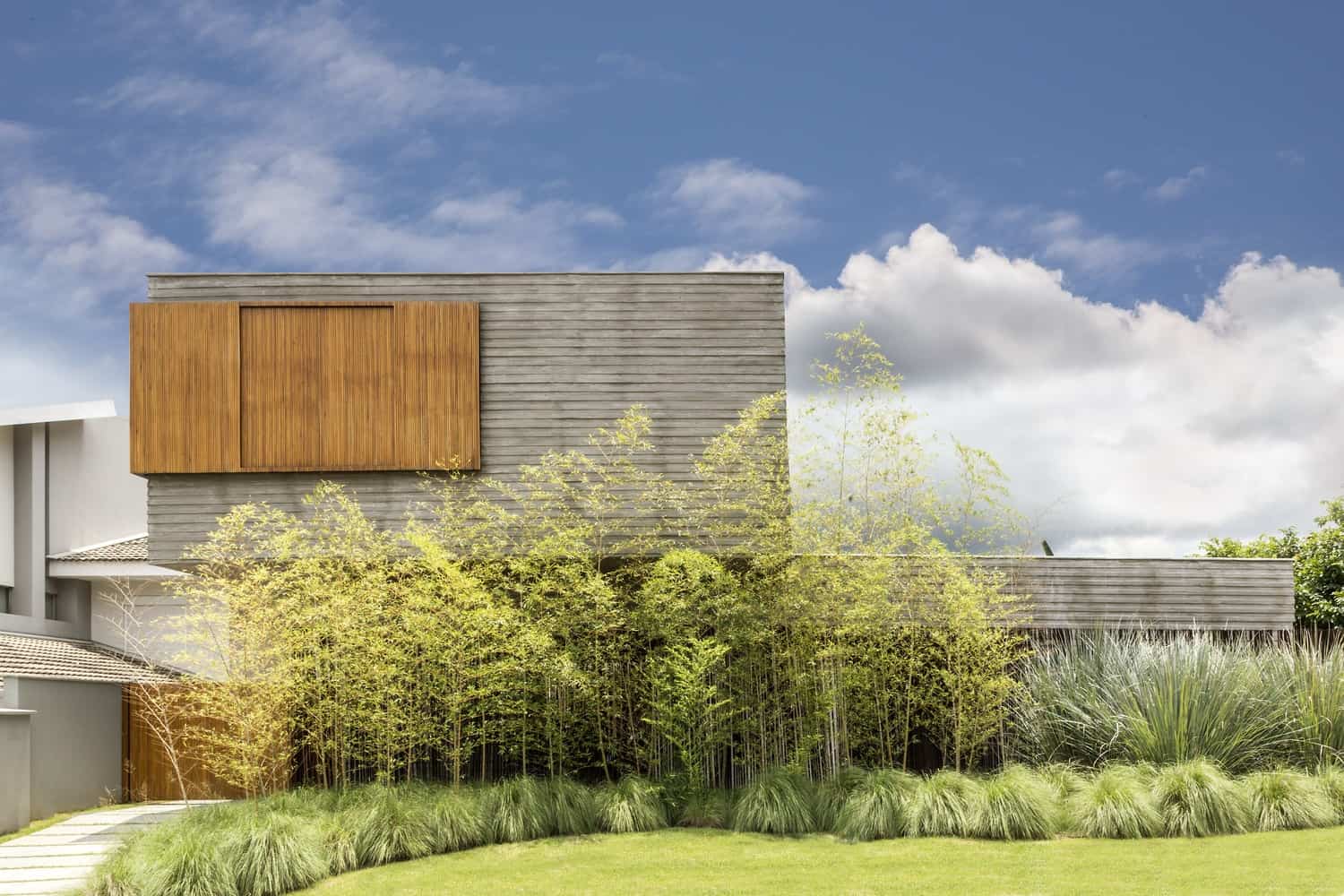 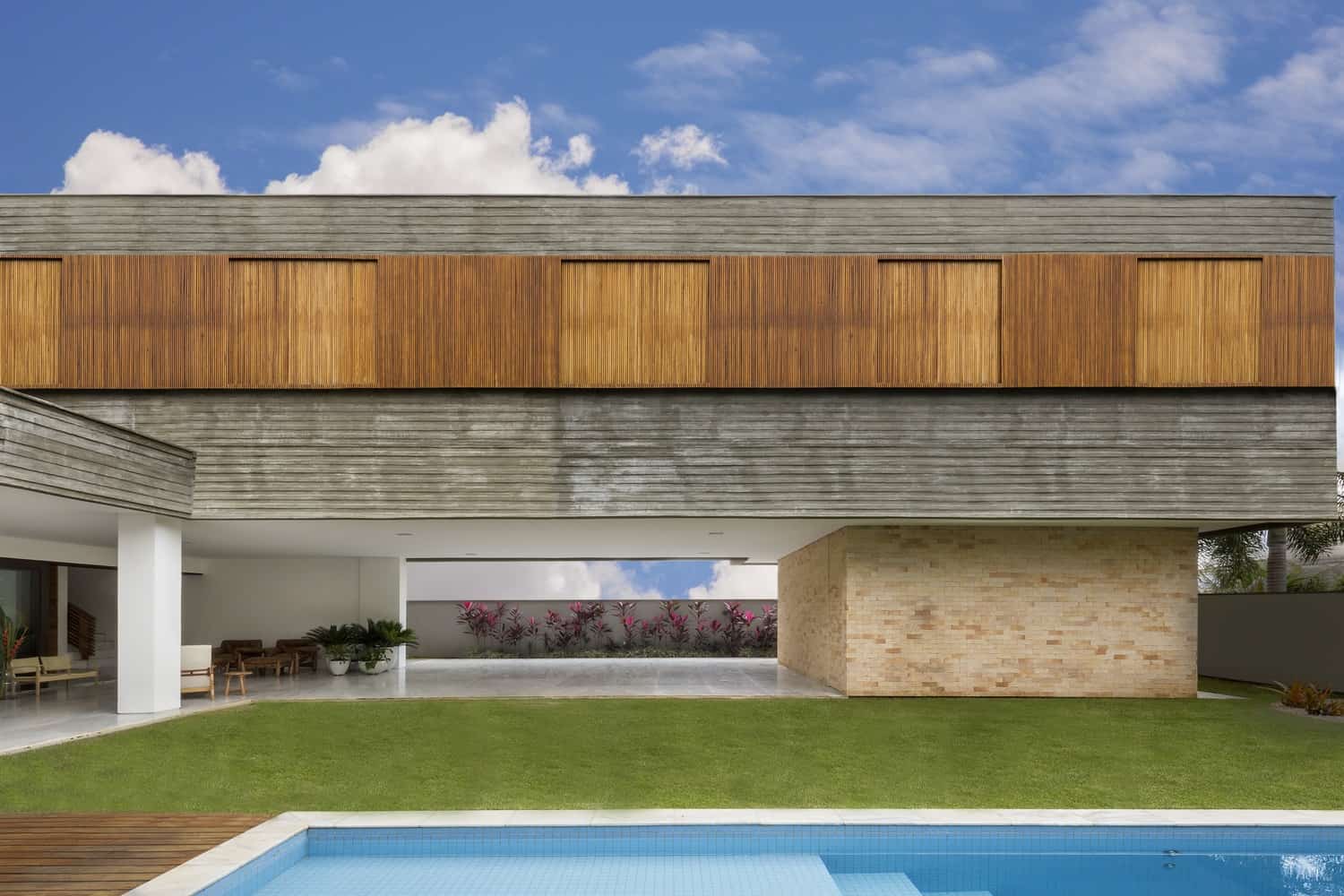 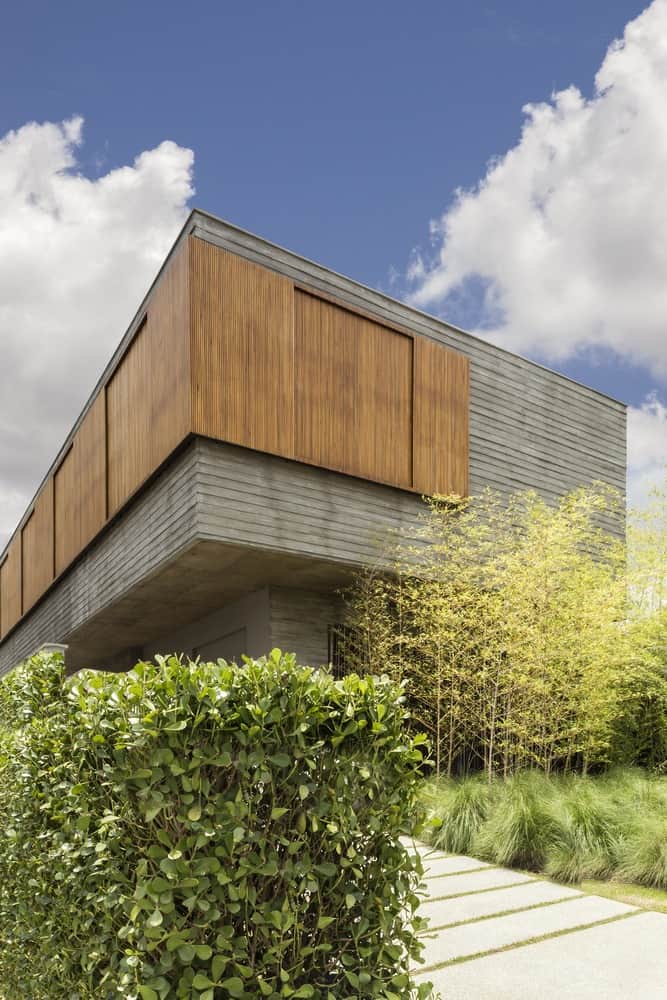 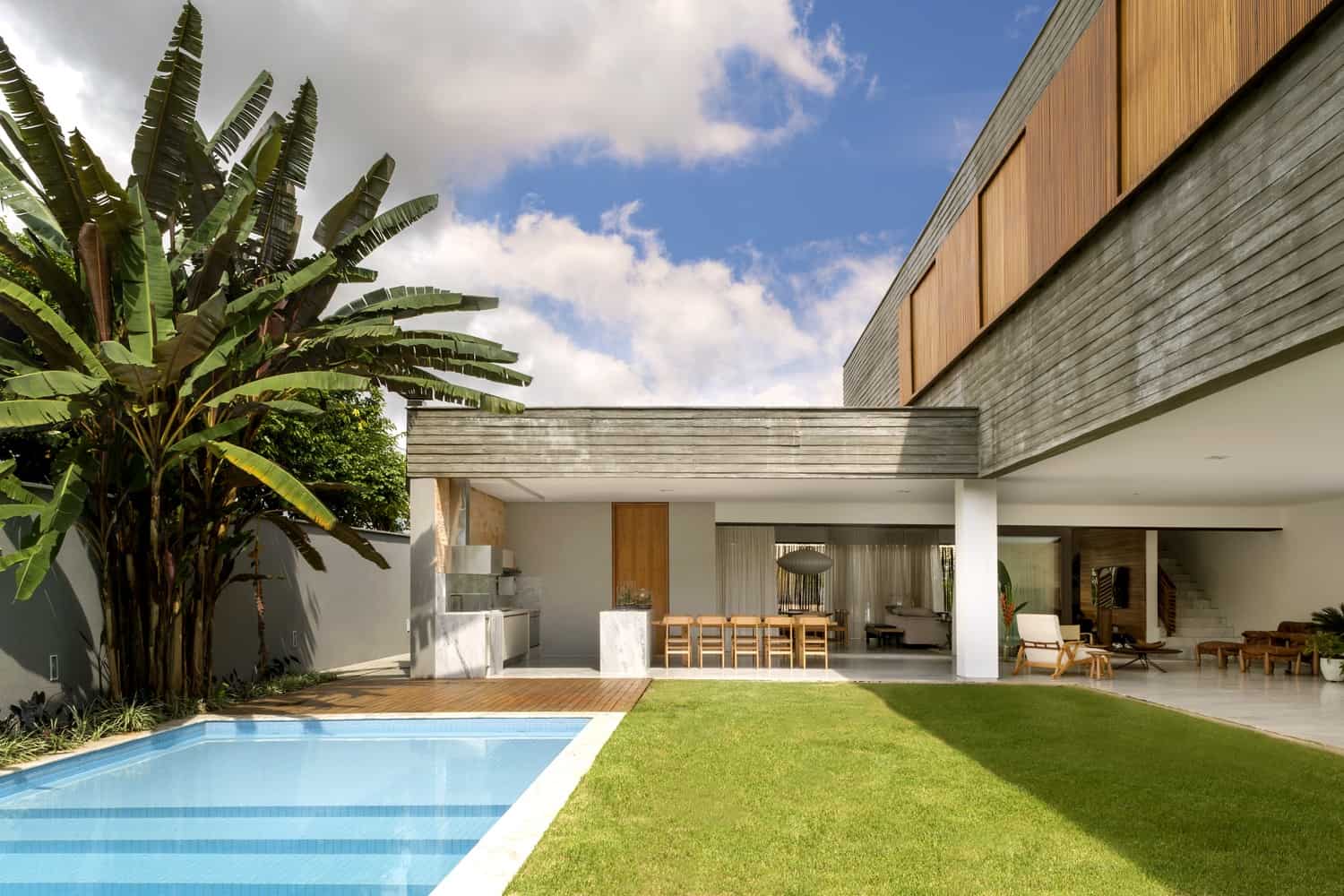 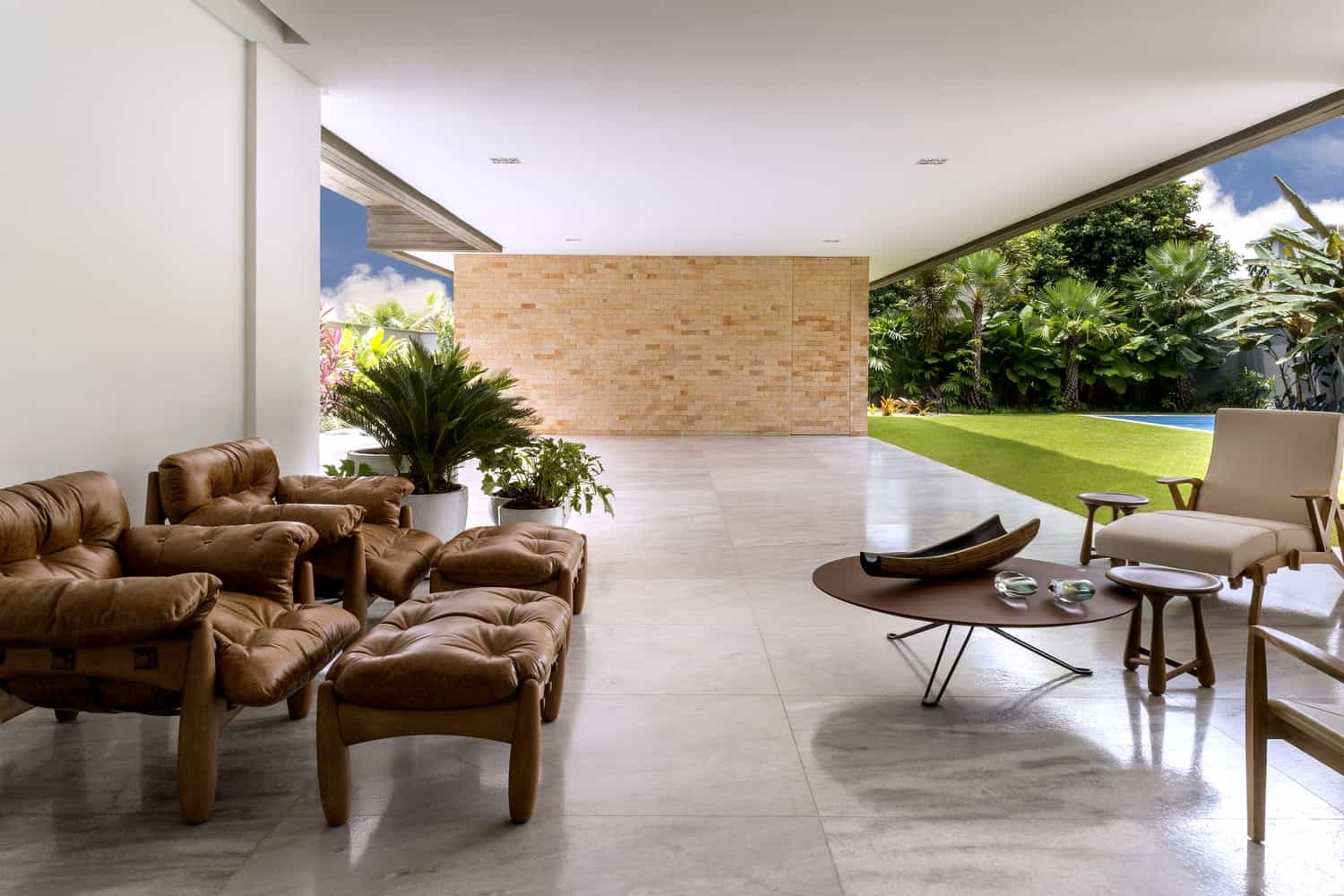 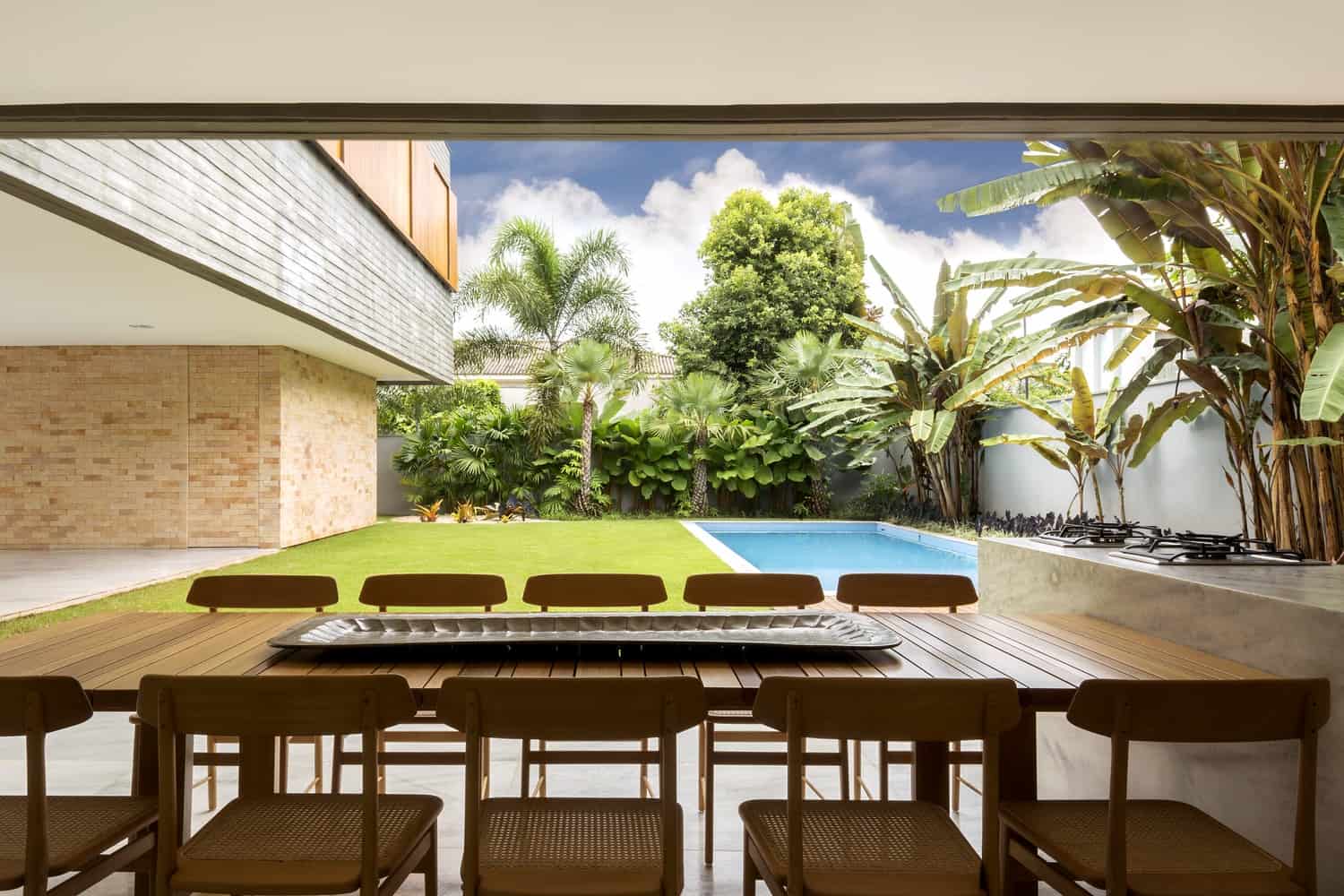 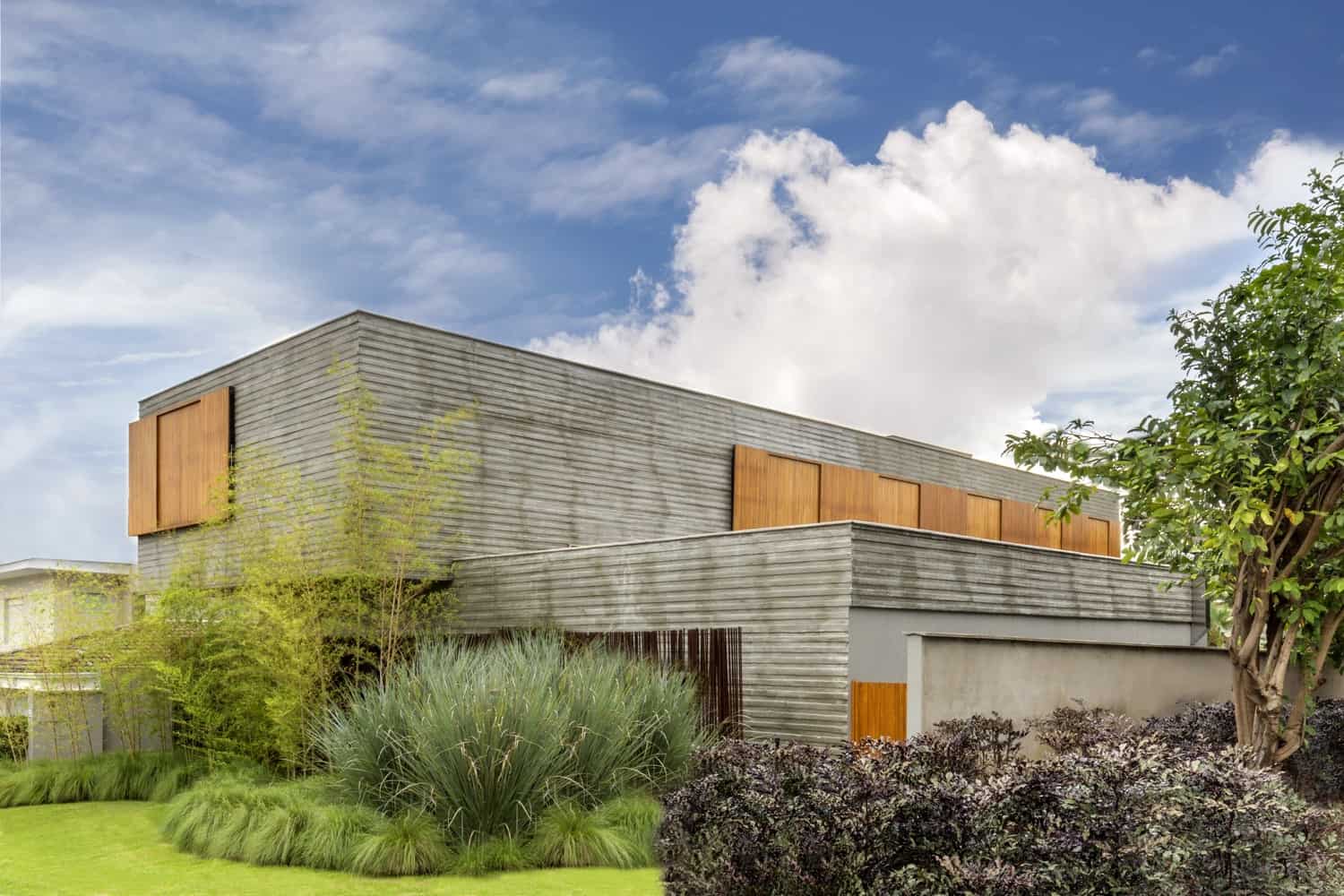 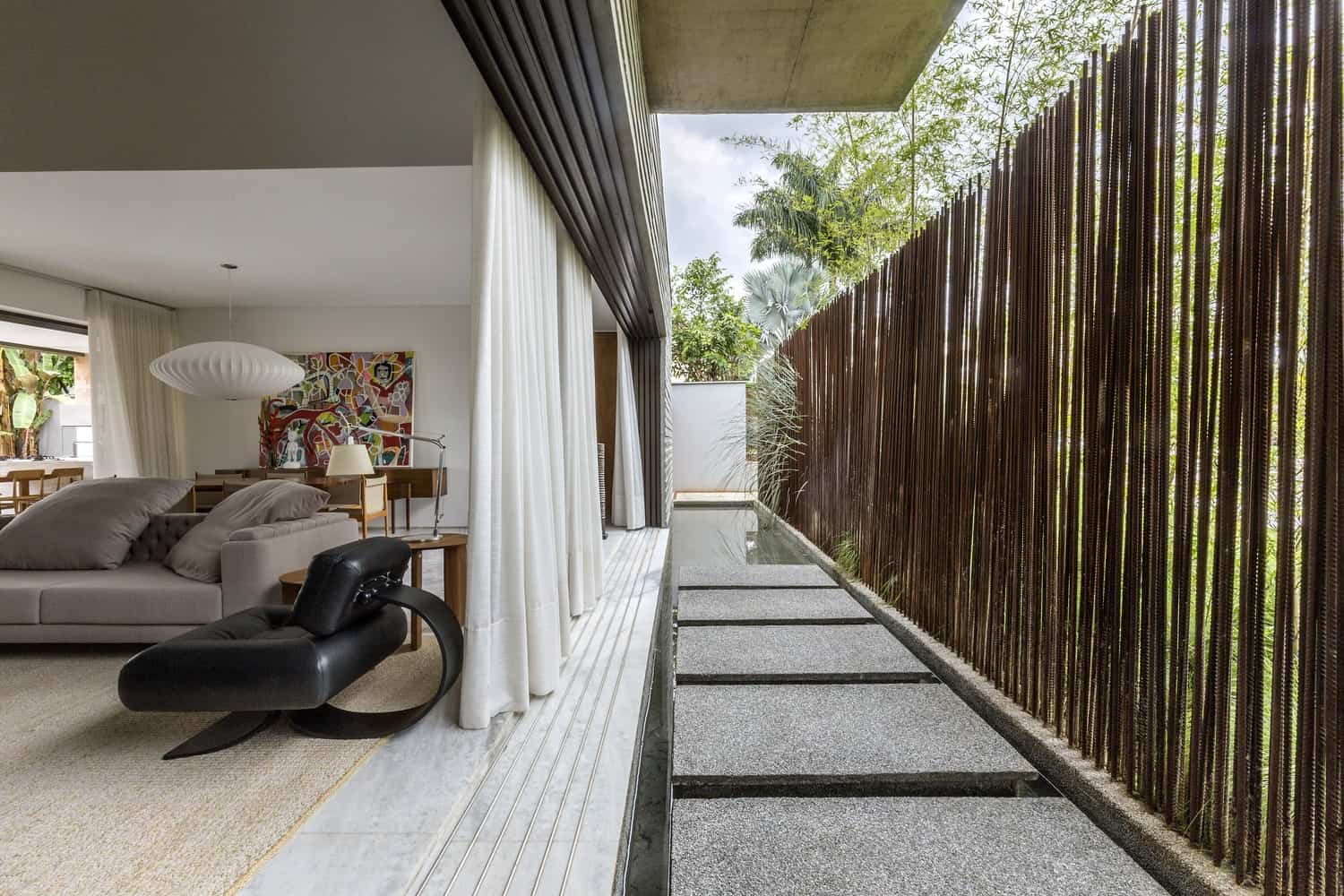 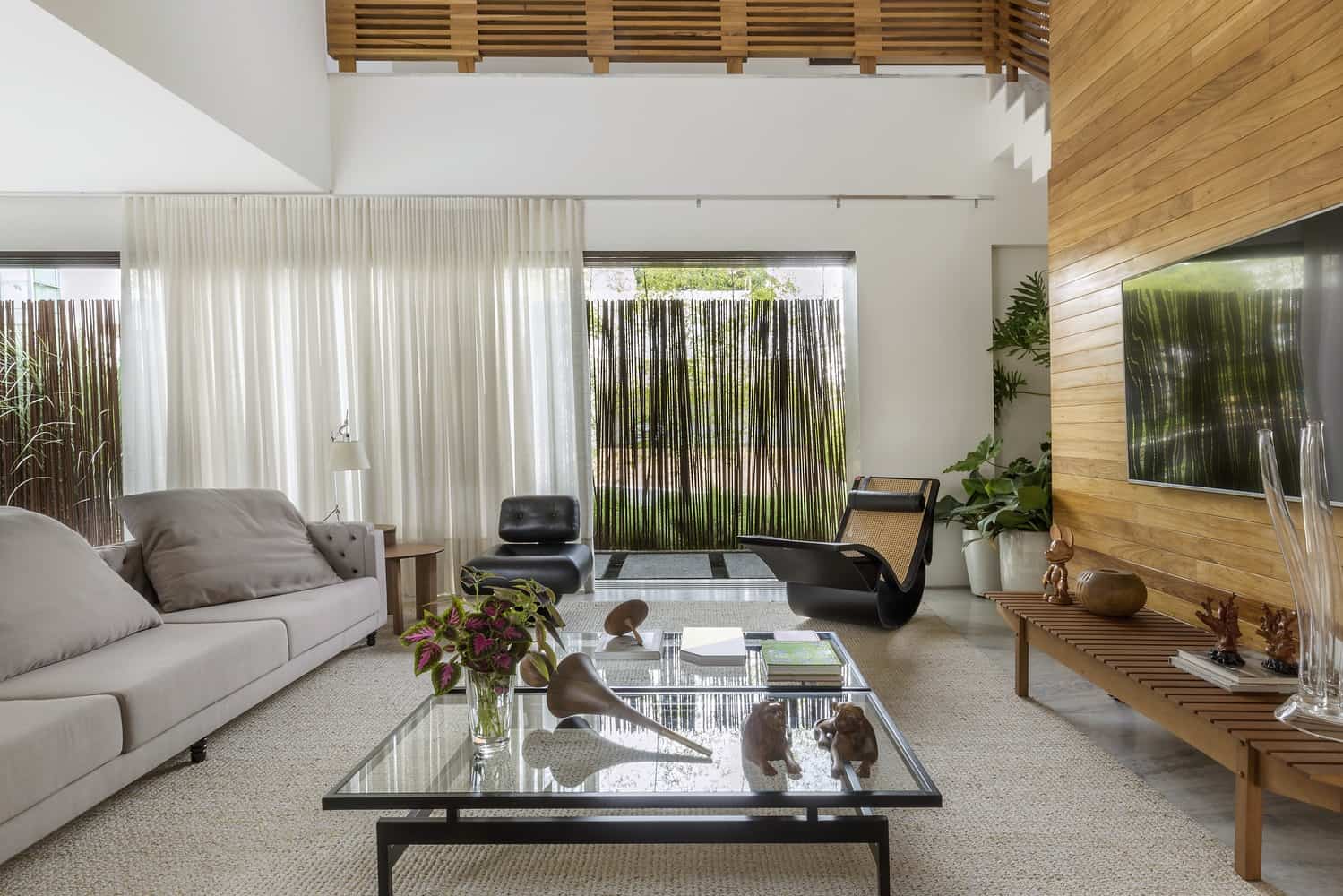 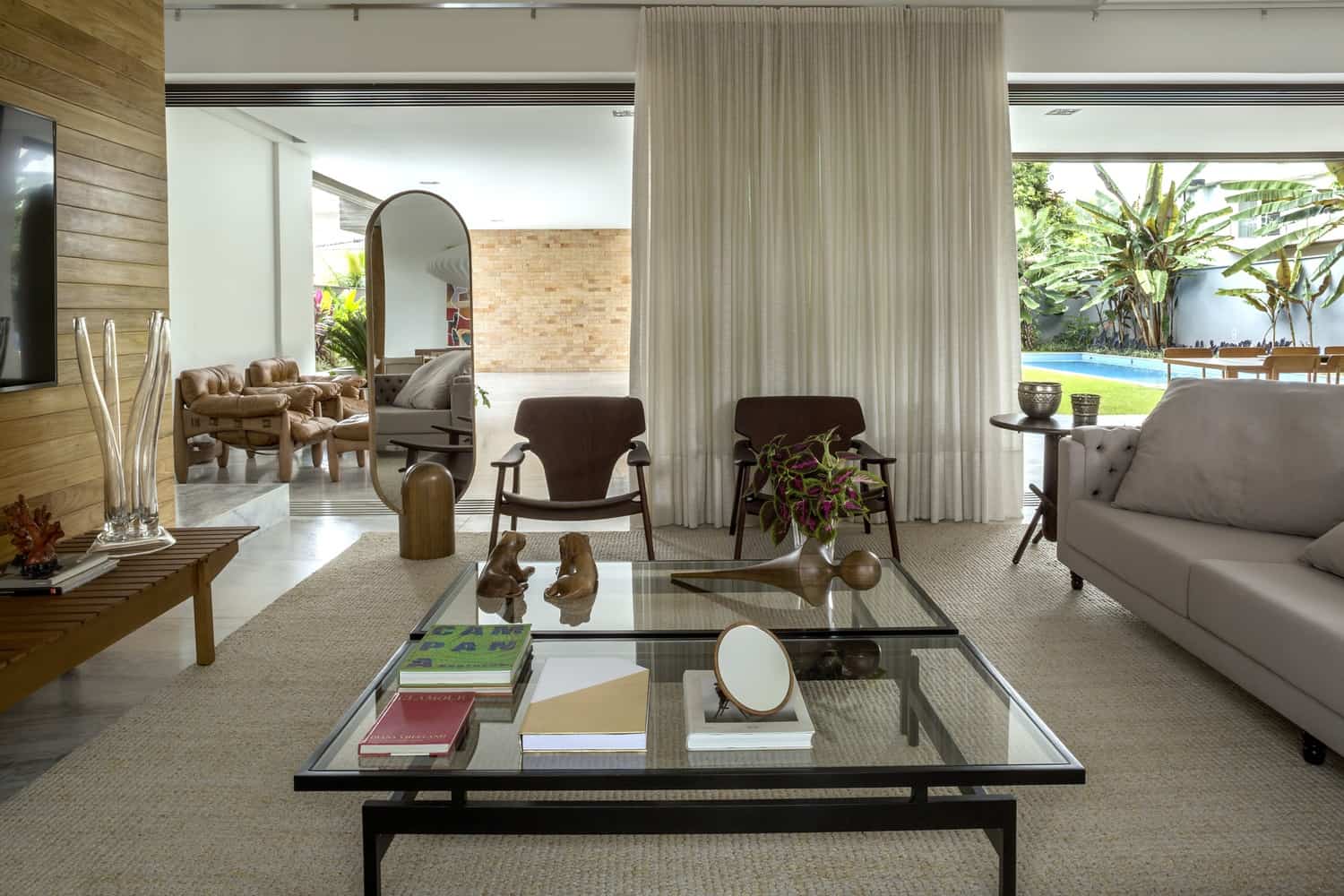 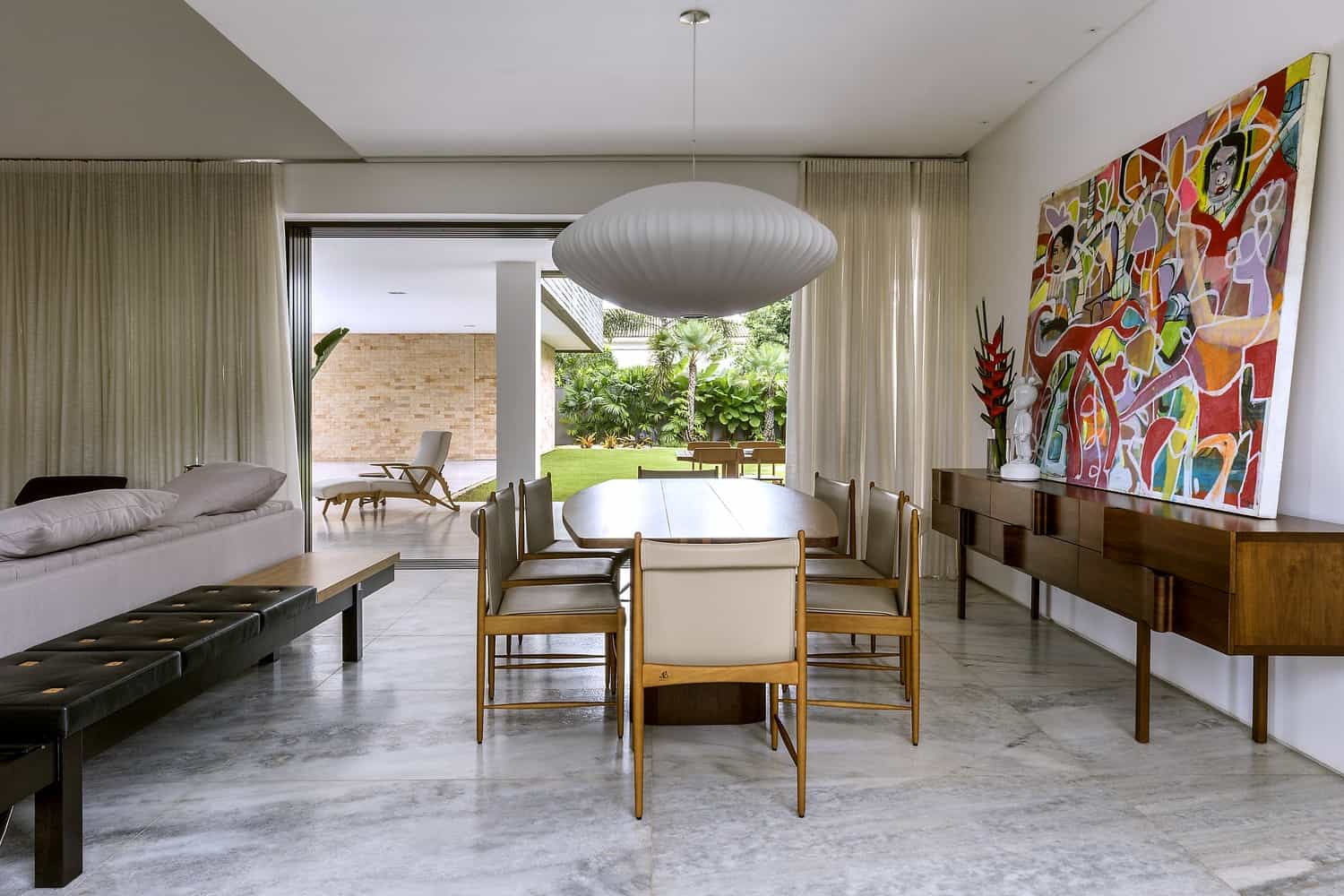 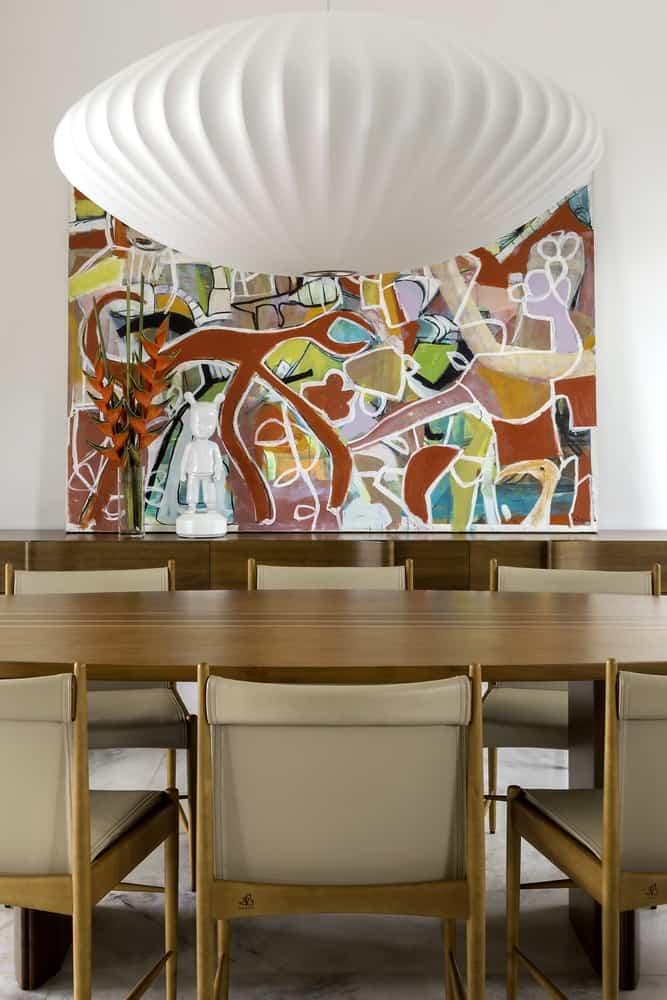 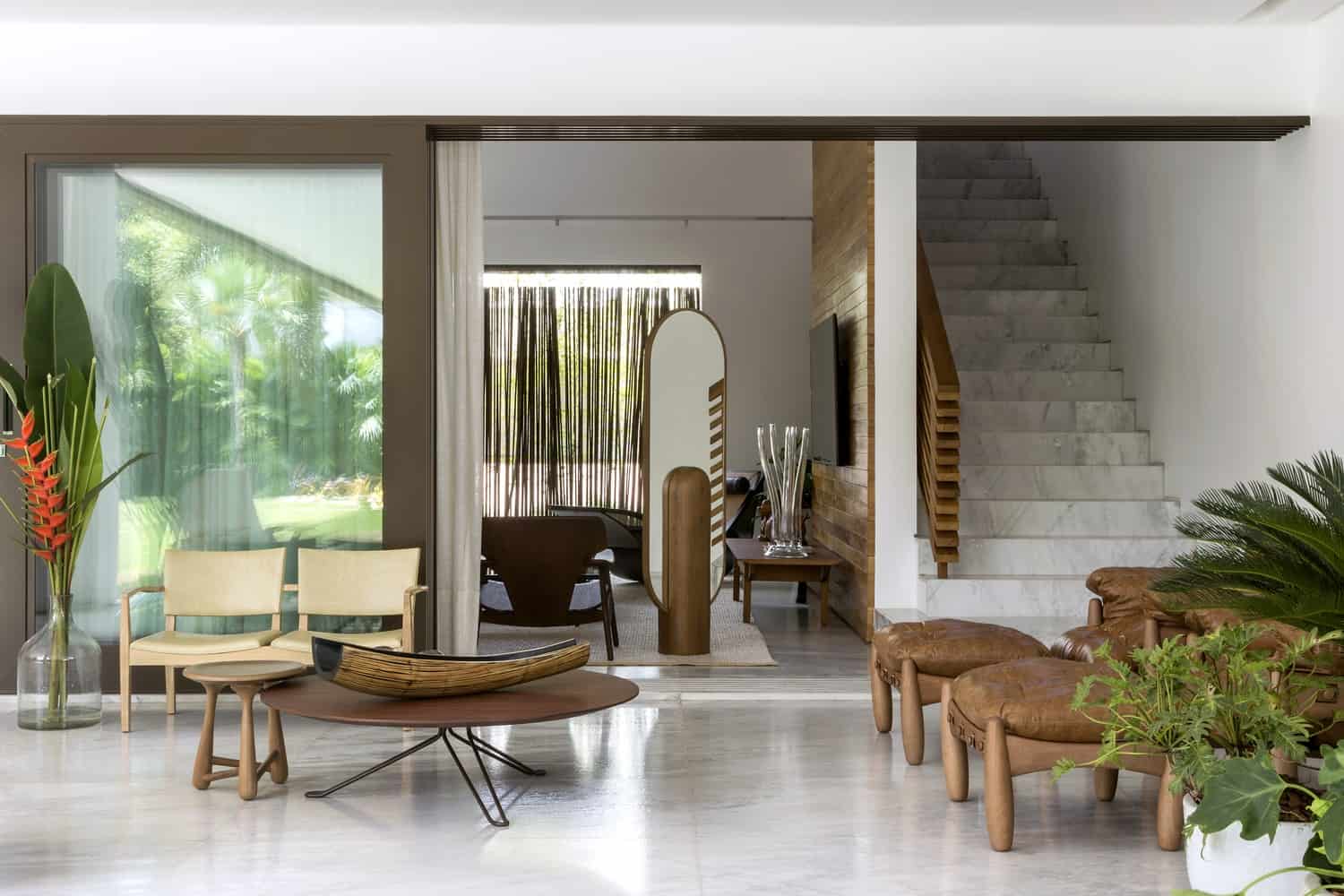 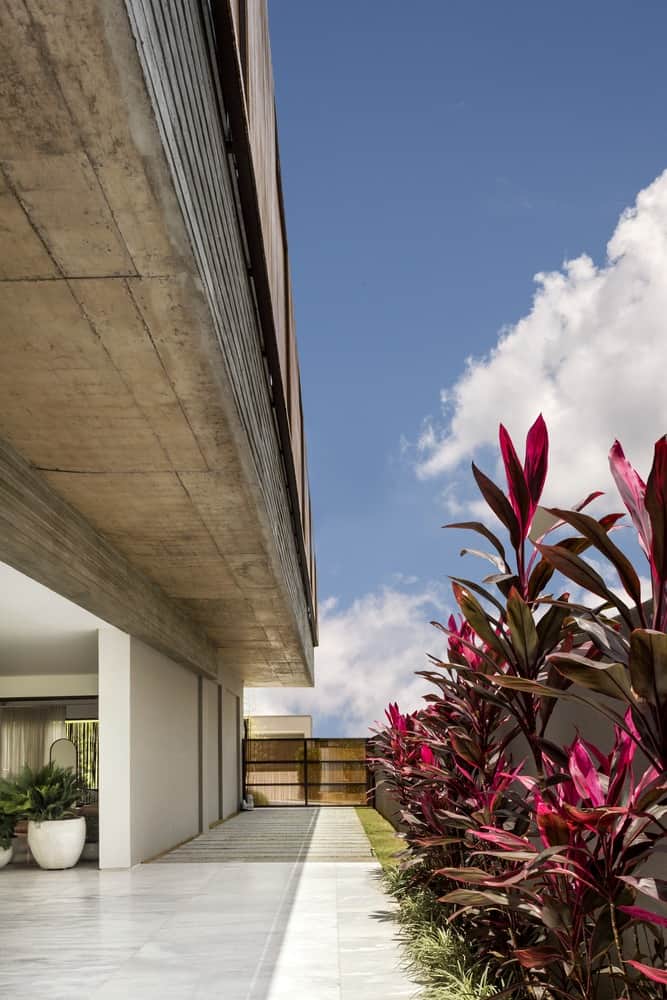 On a stunning green plot on the edges of a city in Brazil, Leo Romano has recently created a stunning L-shaped house called House of the Winds with the explicit intention of creating a relaxing atmosphere through natural materiality and blending indoor and outdoor spaces into one lovely living area.

The house was built on a lusciously green plot of land that provides a lot in terms of views and garden spaces already. Designers chose to create a building that clearly uses contemporary architectural principles despite its very natural looking setting in order to create some beautiful contrast right off the bat, before visitors have even entered through the front door.

The shape of the house creates a fantastic recessed area in the inner yard where the walls provide some shade for a lovely balcony. The way the house dips inward also gives a feeling of increased green space, contributing even more to the already nature-filled views that same balcony is afforded.

The L of the house is formed by two separate volumes with varying floor plans. The two box-shaped volumes overlap at one end, which is where the differentiation between public and private spaces inside the home takes place. Social and shared living spaces lie in the front volume where the main entrance is, while intimate spaces like the bedrooms and a master bathroom sit in the volume that sits further away from the public entrance.

The base of the volumes on both sides is formed from reinforced concrete which, all around the top half of the house, is surrounded by a screen. This screen is made from steel rebar, which creates a visually interesting effect and makes the structure look rather grand and noble indeed.

In stunning contrast, a smooth wooden partial facade wraps around the side of the house with more windows facing towards the best natural sunlight. Large wooden shades here can be pulled closed for inner shade, temperature regulation, and privacy, as you see in most photos here, or the screens can be pulled back and fully opened to welcome the sky into the room.

A similar fully opened feeling can be achieved downstairs in the primary living rooms and social spaces. Here, the full floor to ceiling patio windows that protect the inside of the house from weather without sacrificing any light can be retracted fully into the solid walls surrounding them, almost as if the barrier between the living and dining areas and the sunny patio has dissolved.

To give the inside of the house as much character as the outside provides viewers from the street, designers on this project chose to furnish and decorate the space using pieces created primarily by artists from the local area. Brazilian made furnishings made the spaces comfortable and stylishly useful while stunningly colourful paintings and impressive sculptures created by local artists make the home feel every more inviting and uniquely contemporary.

The Beacon House by WOW Architects