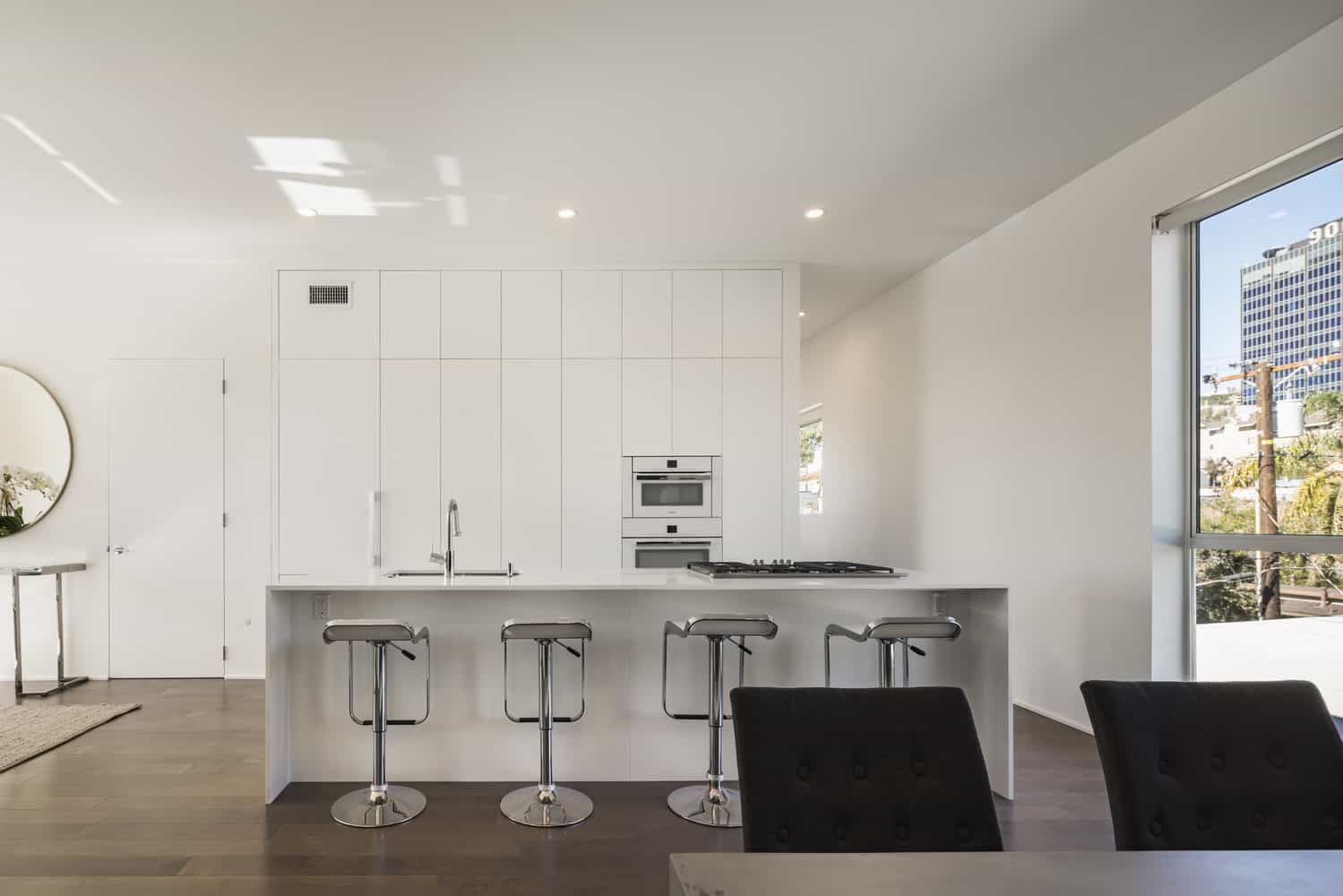 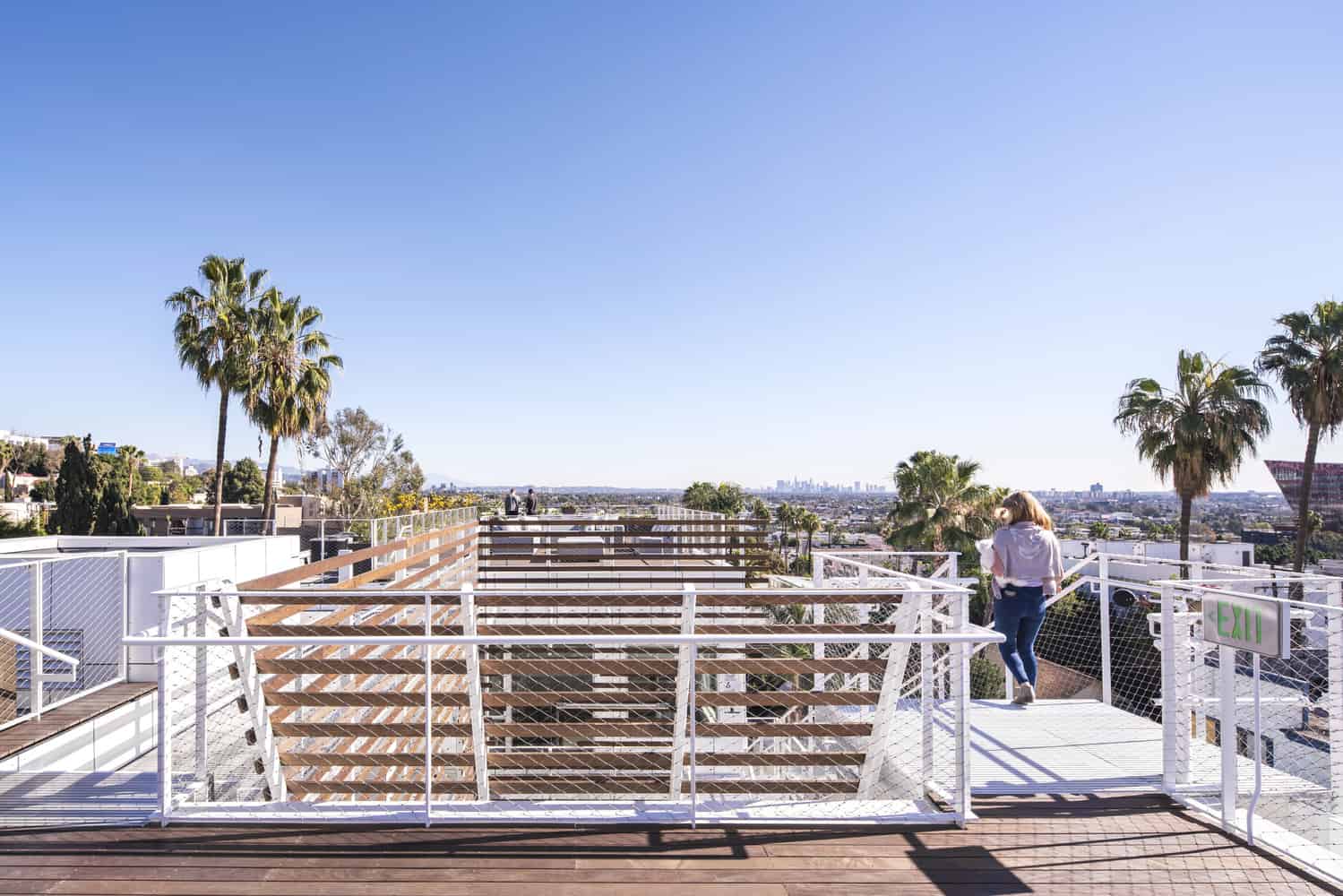 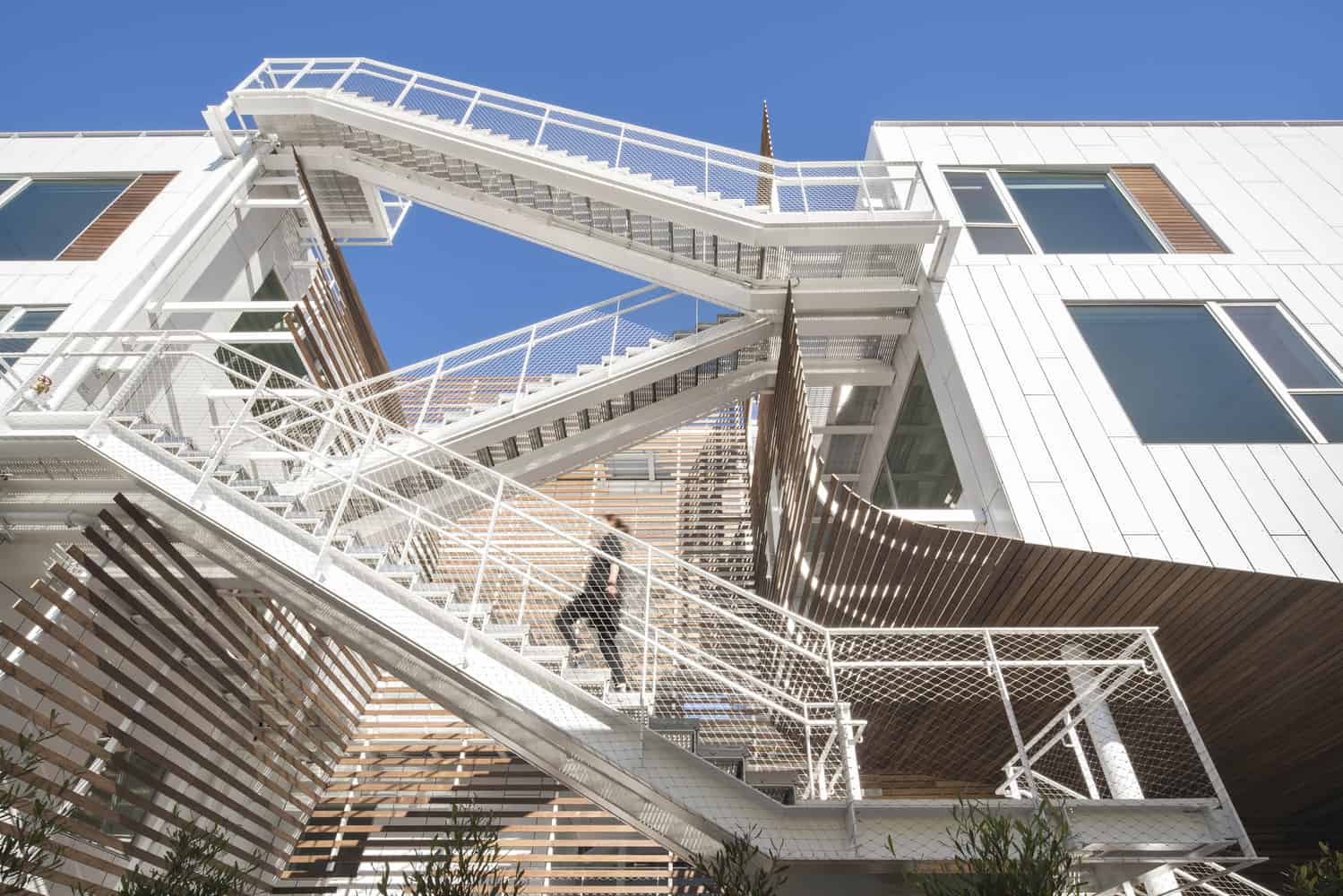 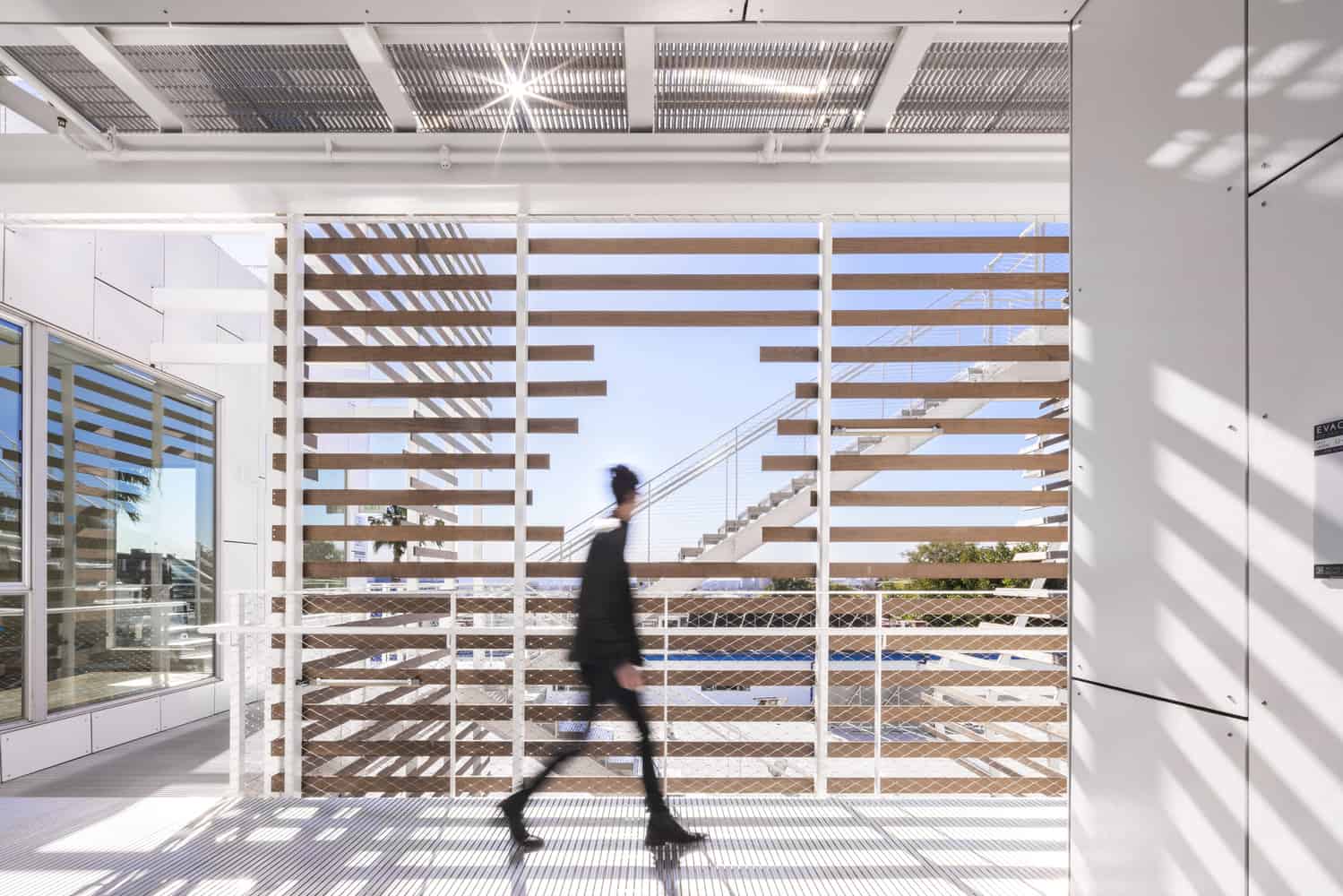 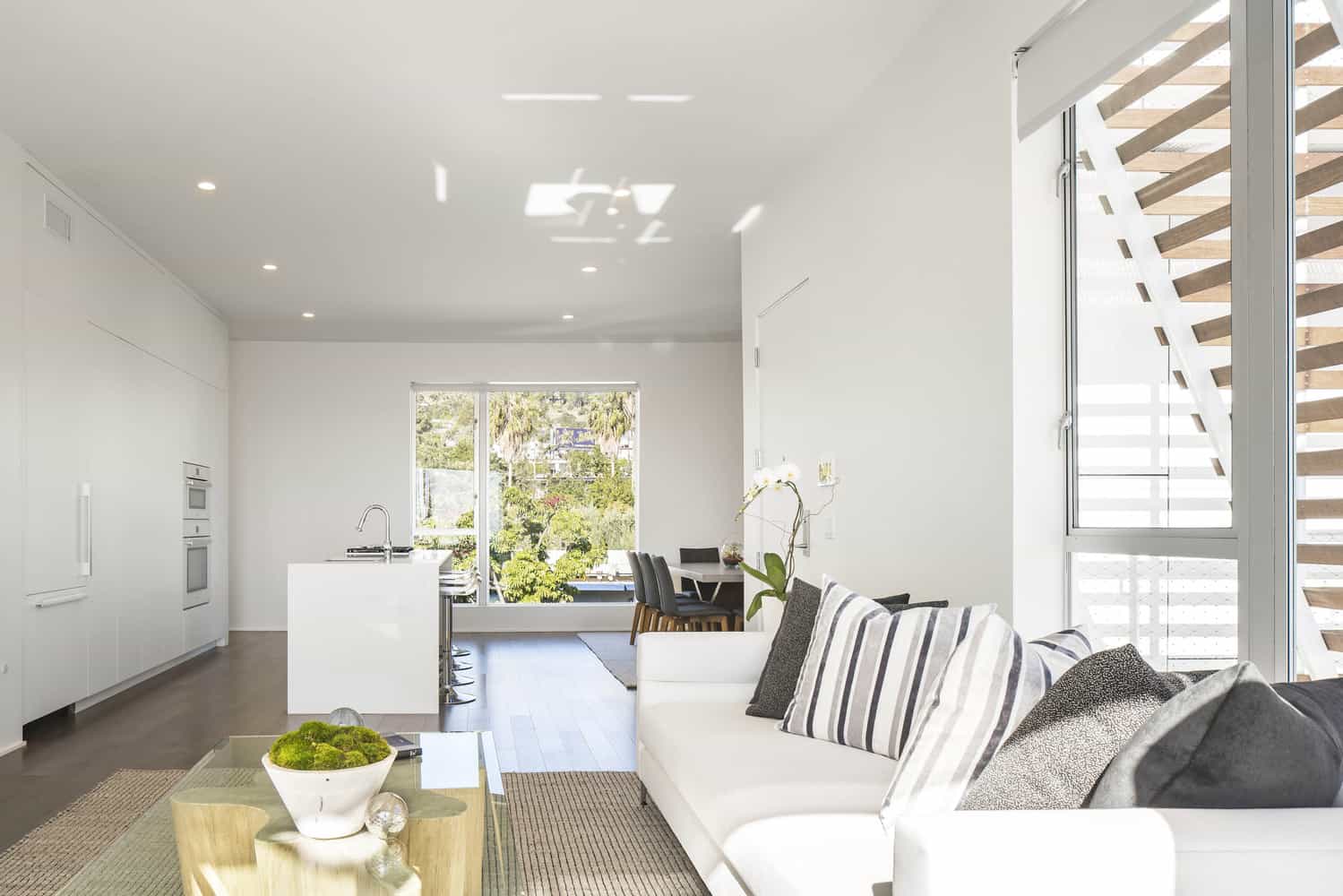 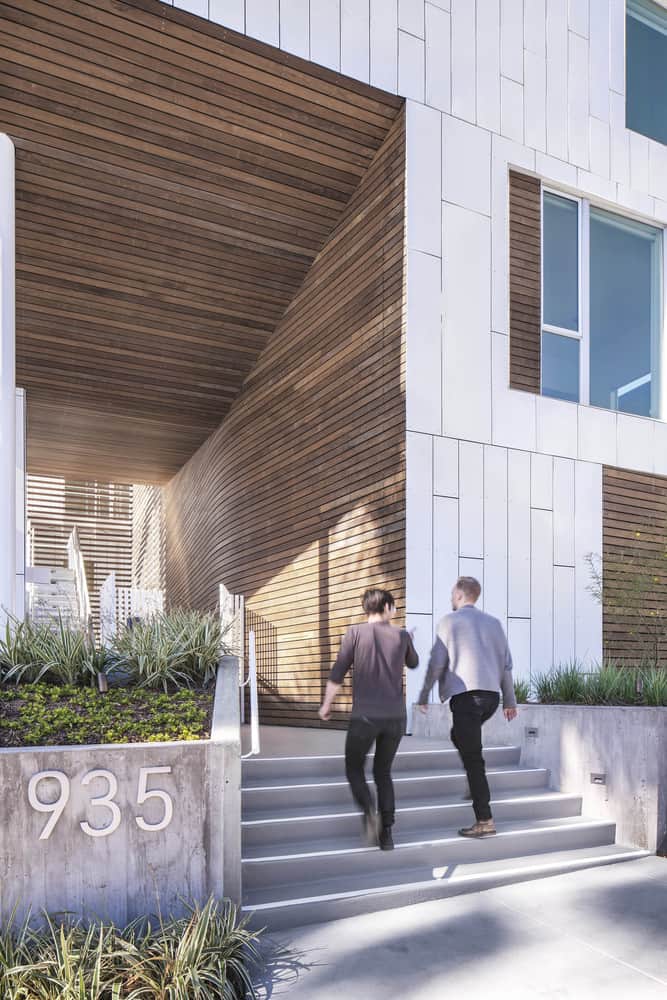 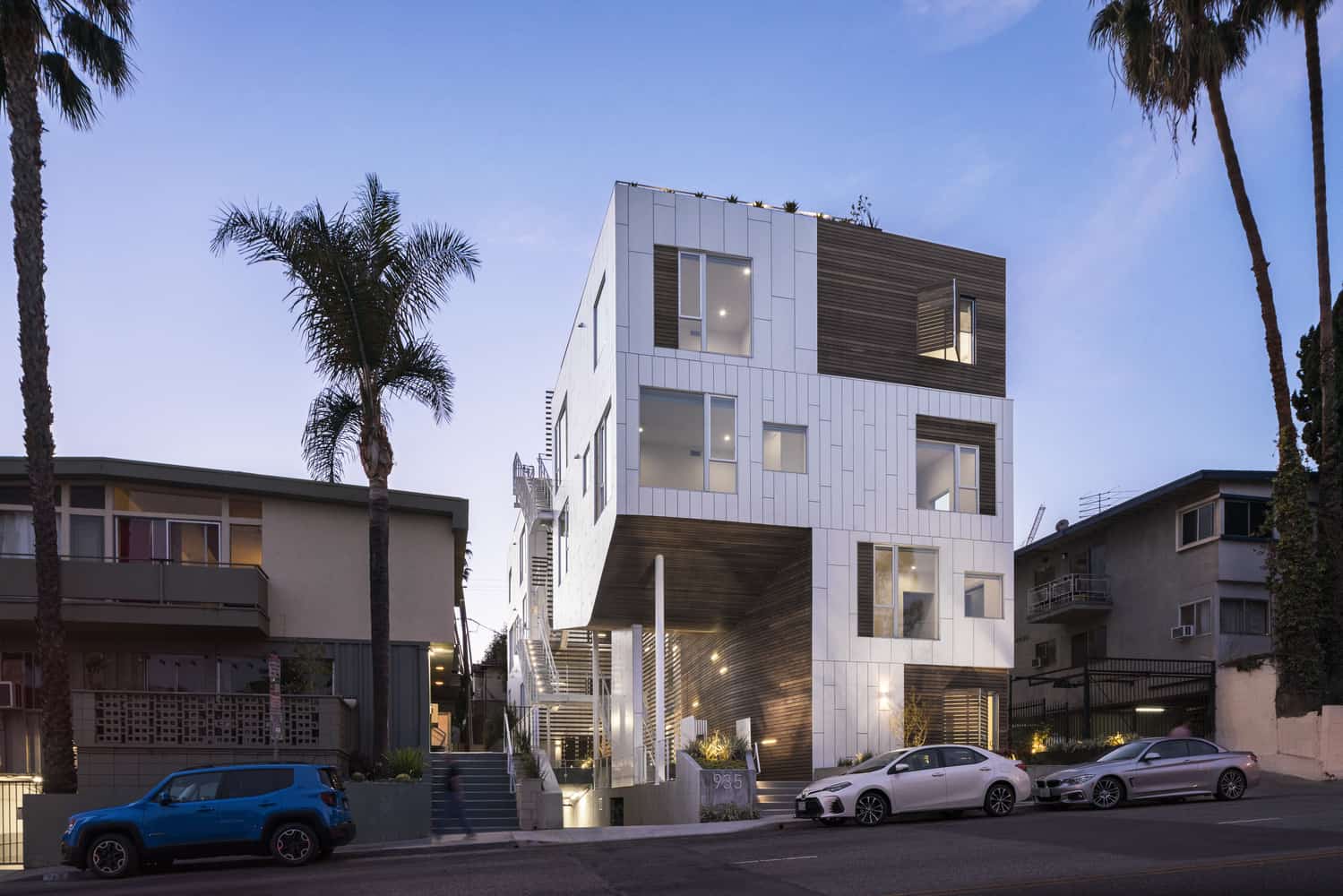 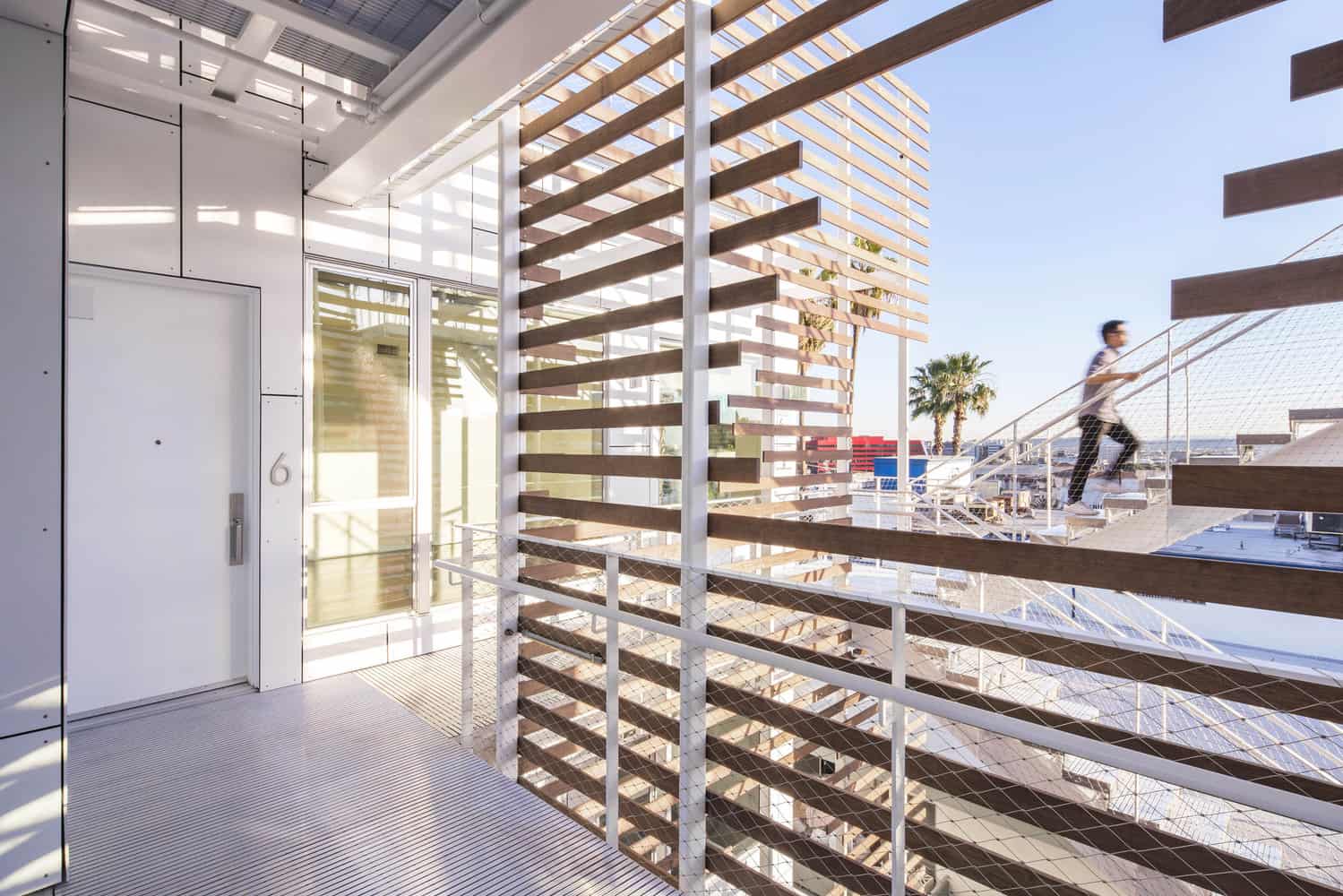 In the vibrant and exciting neighbourhood of West Hollywood, in Los Angeles, California, innovative designers at Lorcan O’Herlihy Architects have recently completed a uniquely open air shared housing project called the San Vicente935 Housing. Even before this project arose, this particular design and architectural team was already working on a general commitment to creating buildings and spaces that promote thoughtful design, even in cases where older, pre-built spaces are simply being overhauled or adapted, as is the case here.

The original building was erected along classic courtyard housing, which is quite typical of the area. This is where an open air courtyard sits in the centre of the building, like a shared, open air heart, while the individual units rise up around that funny column, providing individualized housing around the outer edges.

The building stands tall and square on San Vincente Blvd, nestled conveniently between Santa Monica and Sunset. Without spilling over the limits of the plot and the original building’s limits, designers restructured the inside to allow for maximum living space in each unit while also leaving as much space in the centre as possible for a large, beautifully sunny shared courtyard.

This outdoor common space is quite a common feature in Californian apartment style homes, particularly in this area. What distinguishes this particular building is the way that designers chose to open up the hallways entirely while still using creatively placed wooden slats to provide a bit of visual privacy from the street as each person approaches their own unit door.

The way the house rises vertically and amalgamates shared space rather than giving each unit cover a sprawling individual square footage arose from the need to get creative with how space in housing is used in densely populated urban areas. The units are by no means too small, but they are more personalized and geared towards good resting areas than the average apartment.

Quality outdoor spaces have also been prioritized highly within the building’s refurbishment. Building an open air spot in the middle of the building takes advantage of space that would otherwise be filled regardless, melding the indoor and outdoor experiences rather than having to extend yards and patios into the outdoor spaces around the building. It’s really all about space efficiency!

In addition to taking advantage of outdoor space in an interesting way, designers organized the units around that central outdoor space in a manner that puts large emphasis on social connectivity and access to the street and culture right outside the gates. Sure, privacy is important and is no doubt provided, making the courtyard feel like its own unique getaway, but the excitement and hustle of West Hollywood is never far off, with all kinds of fantastic amenities very close by.

Part of the social connectivity of the space is that the courtyard is more than just a place to relax; it’s also a space of convergence where people pass through to get all manner of places within the building, making it almost like a meeting hub, but one that is much less busy and overwhelming than, say, a public square or park. Instead of feeling like a place outside of one’s home, it feels like a spot for a very small community to interact with other residents and their visitors.

The courtyard and the building’s open-air hallways do more than just look good and make room for unique outdoor space. They also play a role in reducing the need for powered heating and cooling systems; the natural sunlight and breezes do most of the work in the climate control department, making the building a little greener and less impactful on the environment.

While the individual units are certainly geared towards rest, the courtyard extends that idea outward and continues that theme thanks to its layout. It is presented like a place meant for meditation, featuring a water feature, natural stone seating that varies from individual and cozy to versatile and socially grouped, and lots of beautiful local greenery.

When it comes to the units, the building has two different types of apartment. This prevents things from feeling too repetitive and cookie cutter from space to space. The units appear to envelope the open space, which is undoubtedly the nucleus of the building. They benefit from its natural light, which spills into every space between the uniquely cut slats that form the “hallway”, making the building in general feel just about as limitless as a place with private residences can be.

The building is organized so that the apartments have plenty of space each thanks to the way they fit together like puzzle pieces behind the walls. on the ground level are the entrances to three walk-up style homes. The middle storey makes space for a series of two-story homes, while the upper floor features four single-story apartments. No matter its type, every single unit in the building features impressively large windows for natural lighting on at least three outer walls.

In keeping with being low impact and green, the building is actually made of primarily recycled materials, providing an aesthetic blend that is partially industrial influence, partially natural looking, and very unique indeed. In fact, designers actually had a special powder coated fibre cement board created custom for this building specifically because they needed it to be light in both colour and weight for the structure they wanted.

An Apartment in the W Boutique Tower by Ando Studio