This 3,230 square-foot contemporary residence is located in North Narrabeen, a suburb in northern Sydney, in the state of New South Wales, Australia. 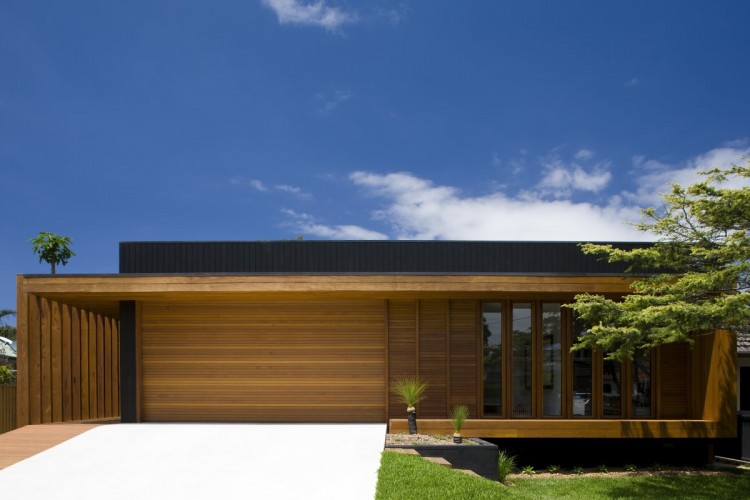 “To look at it, the Narrabeen House might not seem like your typical home in the suburbs, but in the way it operates, this house is completely suburban. This home is a retreat from the city.

A series of threshold devices increasingly separate the visitor from the street, to the extent that in the main living spaces there is no sense of neighbours, of the suburb, or of the city beyond.

Extending on conventional courtyard house typologies, the design utilises an interlocking of interior and exterior spaces. It is through the central courtyard that the house is accessed, the courtyard also acts as the main organising element, around which the family living spaces are arranged. These spaces are private and interior, though thanks to the courtyard, they are also exposed to the outdoors. The architecture plays with the tension between these elements, the outdoor ‘rooms’ giving internal and external living spaces. This interior arrangement also plays against the strong directionality suggested by the site; at the rear of the house is a southward vista, looking over the Narrabeen Lagoon.

The design also makes use of varying heights above the adjacent water. As the house is built on a flood plain, the structure is by necessity raised from the ground. This includes not just the house, but the courtyard itself. In relation to the raised courtyard, the swimming pool is below, built at ground level. And upon entering the house’s inner space the visitor realises that there is a second storey that cannot be seen from the street, and from which they can find views of the surrounding landscape.

The design finish throughout draws on the simple elegance of blackened and medium-stained timbers. The restrained palette, with the house’s simple volumes, creates a calming atmosphere, reinforcing the idea of a withdrawal from the city.