GMP Architekten has completed the Guna Villa project in 2006.

This 6,835 square foot three story contemporary home is located in Jurmala, a city about 25 kilometers west of Riga, the capital and largest city of Latvia. 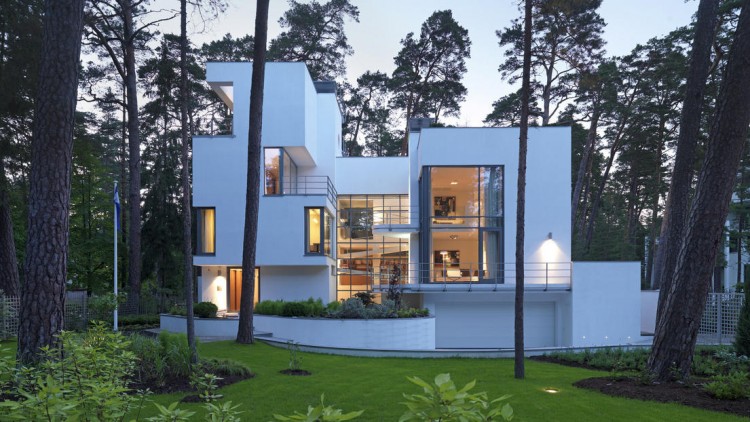 “The primary feature of the design is not the actual functionality of a villa, but rather far more the actual physical experience of the site, characterized by the dialogue between the surrounding landscape and the view over the dunes of the beach near Riga.

The facade of the Villa Guna is a luminous white, creating the greatest possible contrast to the dark trunks of the thick, evergreen pinewood forest and the blue of the ever-changing sky over the Baltic Sea.

The villa opens up towards the south as a U-shaped structural body. The visitor en-ters the house protected by the elements under a projection on the western section. This western portion of the house serves as an impressive entryway. Located on the upper floor are the sleeping quarters, including bathrooms and dressing rooms, which accommodate the hostess and her guests. The living spaces are located in the eastern part of the house.

The structure is organized as a split-level dwelling. This means that the levels are offset from on another by half a story. In this way a multi flight ramp becomes one of the main features of the house’s design. It occupies the central space, connects the various levels with each other and is thus part of the overall living experience. Adjoining rooms, such as the house’s library, are open to this middle space, providing views. At the same time visitors can continually enjoy the changing sights of the natural surroundings, mak-ing the ramp itself an experience.

An expansive window front opens the living space up to an adjacent terrace on the southwest. Already visible from outside as a vertical element, the fireplace forms the focal point of the living space. Because of its position in the room, the inhabitants always enjoy a relationship to the outside. An air space connects the two-story living space. Eyes are drawn to the elegant curvature of the gallery railing on both levels and, on the upper level, its S-shaped curve is developed into a simple sculpture.

In addition to various terraces and exits, another special feature of the Villa Guna allows its users to get particularly close to their surroundings. A platform in the north-west corner of the building rises up 15 meters above the forest floor. The sculptural effect of this dwelling structure finds its completion in this observation tower. Right in the mid-dle of the treetops, with a sense of the sea just beyond the crowns of the trees, this plat-form just may be the most contemplative space in the house.”

Villa Le Trident by 4a Architekten