Canadian studio La SHED Architecture has restored the first two levels of a neglected building located in Montreal and turned them into a large contemporary apartment. 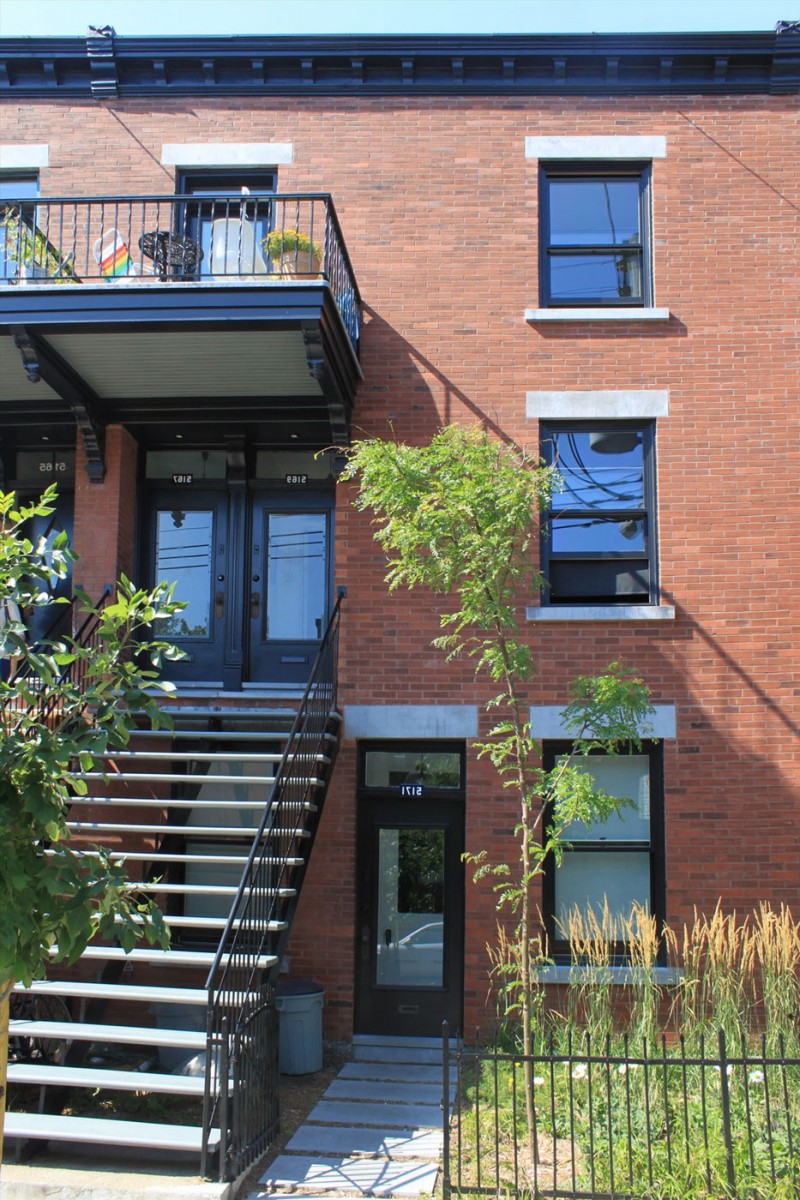 “The project consists in the complete transformations of the first two levels of a hundred years old triplex in the Plateau Mont-Royal, in order to build a large family apartment.

Outside, the architectural aspects of the old triplex were voluntarily kept. The facade has been restored faithfully to its original look. The composition of the openings in the back yard kept its original rhythm. In the yard, colored panels located in strategic places give more privacy to the residents.

The typical linear layout of the house in this neighborhood was hard to provide new spacious and light-full spaces. The whiteness of the house, combined to full height openings, allows natural light to spread along the entire space. New architectural components play an important role in the organization of the space, such as the stairs, the wood covered wall and the kitchen, highlighted by their contrasts with the simplicity of the surrounding spaces.

The architectural path is defined around a central open space. The original subfloor was kept from the demolition to be reinstalled on a new structuring wall stretching up to the upper level. The material, deliberately left raw, brings obvious warmth to the house. The planks are assembled to give the impression of having been slipped down between the new steel columns. This central space also includes the stairs, which has been designed as a sculptural and graphical element. A single steel plate is playing both: guardrail and stringer. Just a few millimeters thick, this monolithic piece of black steel stands out in front of the very textured, white painted, brick wall. The perforated steel stair, riser less, is anchored directly in the adjacent brick wall, which increases the feeling of lightness and thinness.

The kitchen has been made with the same esthetic as the stairs and stands out in front of a white background. The shelf, the counter and its lateral support are assembled as a long and continuous black ribbon. Composed of an assembly of steel plates and Corian, their thickness and color ensure the visual continuity of the strip.

The upper floor bathroom has been created limitless. The threshold less floor allows a simpler open space, and makes any other division useless. All the elements are suspended above the floor to facilitate maintenance and to maintain a spirit of lightness. A fresh touch is given to the ground with the bright blue colored glass mosaic.”

House in Black by draisci studio

Front to Back Infill by Colizza Bruni Architecture

House with ZERO Stairs by Przemek Kaczkowski and Ola Targonska