TECON Architects have completed the Vultureni House in Bucharest, Romania.

The house design responds well to the long, narrow site and creates a private oasis for the home owners. 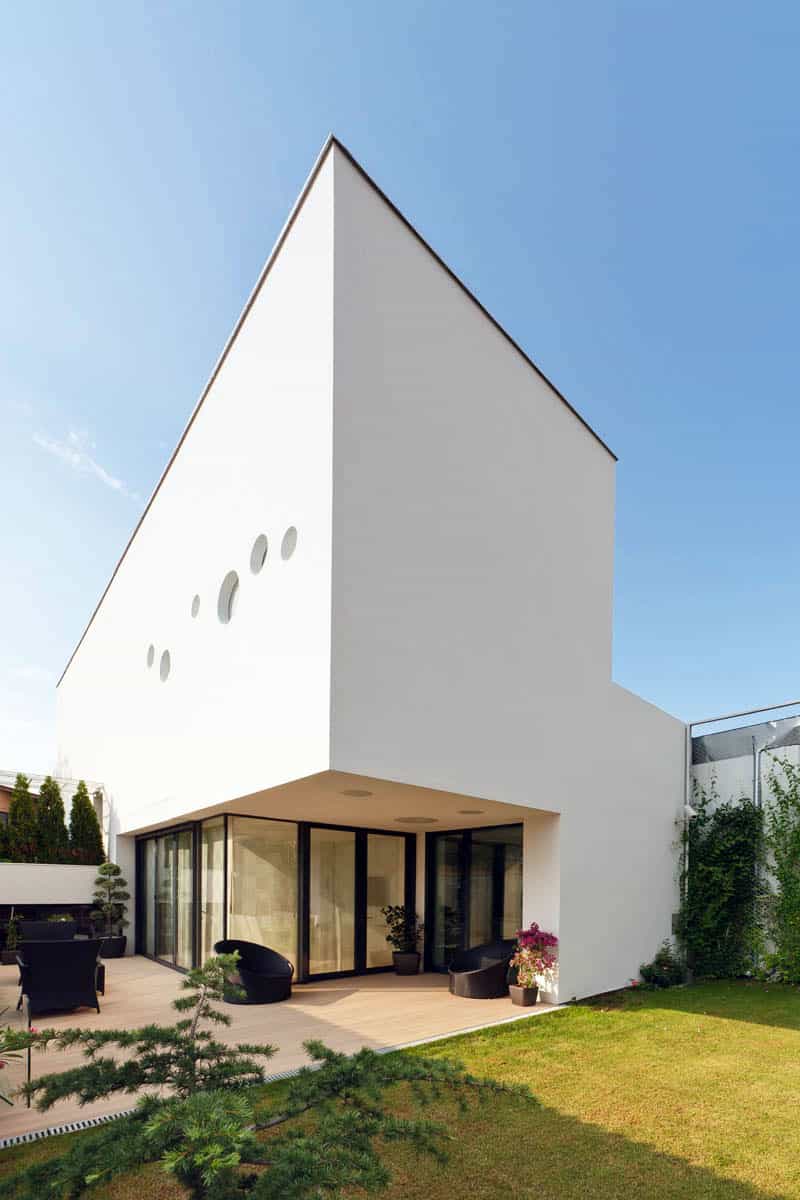 “Located on a relatively long and narrow lot in a visual hostile context the building suggests a division of private property in the public space of the courtyard from the street and the private inner space of the rear yard.

The building participates to the aesthetics of the street by moving private plane separating public from all opaque fence 2m high and you find in most situations the front volume, such interposes space between the street and the house, a small garden and a large transparent surface.

Opposite corners of the volume are generously cut resulting in consoles with large terraces and large glass surfaces for all important spaces. The stringency of the straight clippings is conjugated with playful circular openings that accompany you along the facade to the main access. The access is clearly marked on the solid white façade by a straight transparent glass cover and by the grassy ascending slope starts at the front gate.

Once inside the volume, is a total paradigm shift. To the simplicity, the austerity, the introverted character of the outer volume, it is opposed a fluid interior space, continuous, with strong visual connections between all interior spaces. The surrounding visual connections between spaces controlled by cuts in the outer skin of the volume, together with different areas of the two courtyards increase the feeling of the internal volume.

Development of interior spaces at half level, articulated by a central staircase expressed by a corrugated surface combined with ample glass surfaces amplify the feeling of spaciousness, essentially increasing the volume inside the limited outer capsule. This thing expresses to the viewer form outside the image of a discrete small sized building.

The white surfaces are in tight connection between indoors and outdoors. The immaculate surfaces of walls are joined by the ample glass surfaces of windows, skylights, and the railings which are balanced by the warmth that defines alder wood floors. The robust volume is penetrated by light filtered through the two skylights, the interior space being flooded by it.”

House in an Urban Jungle by Dreimeta

Casa do Conto, a Boutique Hotel by Pedra Liquida