Milan-based architect and designer Victor Vasilev re-designed the interior of a house built in the 90’s in Carrara, Tuscany, Italy.

Minimalism at its best! 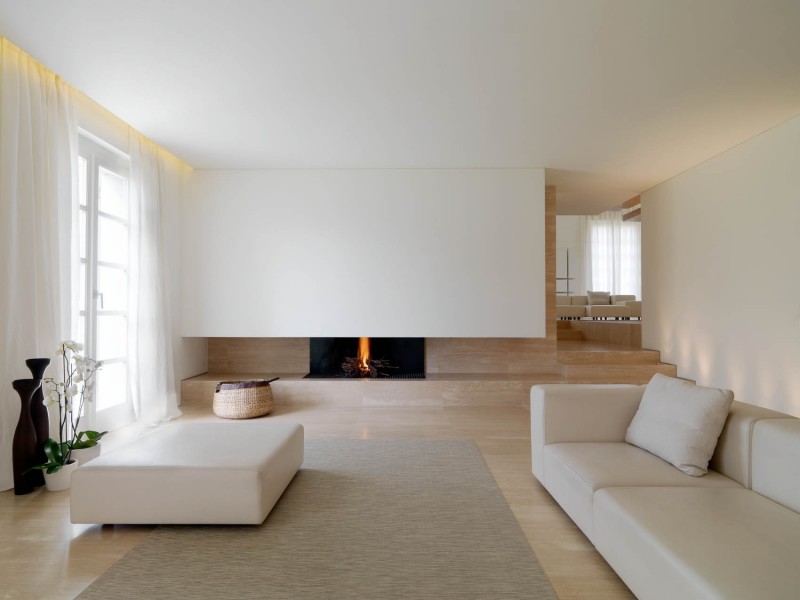 “The house was built in the 1990ies, without design ambitions. The owners wanted the interior to look ‘Milanese’, i.e. ‘ultramodern’. I decided on a complete overhaul, appreciating the space potential – 530 sq.m on three floors. This is not a weekend retreat but a family house and the aim was to create a contemporary domestic environment functional in every aspect. Travertine marble and Indonesian teak were chosen for the material palette.

The design is based on the composition of simple square volumes. The custom-made furniture is integrated in the architecture of the house. A few ‘classical’ design pieces enrich the interior.

The final result is achieved by the interplay of space, materials, custom-made furniture and indirect lighting. It gives out the warm, white glow, which softens the interior.

The family wanted a spa area. A sauna, a big bathtub for four and a massage area were constructed in the basement. A home cinema room with a folding screen was added.

The master bedroom, the children’s bedrooms and a guest bedroom are on the first floor. The low bench in the master bedroom serves as a visual link with the bathroom, thus avoiding distinctly divided spaces. The black washbasin is designed to hide the mixer taps. The photographs were taken two years after completion of the project (2008). In my view this is the best way to evaluate the design and its realization – if it ages well, it is good quality.”

The Brindabella by Webb & Brown-Neaves