This contemporary home was once a dilapidated structure located in Veleslavín, Prague, Czech Republic that offered views of the city.

In 2012, Martin Cenek Architecture brought it back to life as a spacious and energy efficient residence complete with three stories, a pool, and a roof-top terrace. 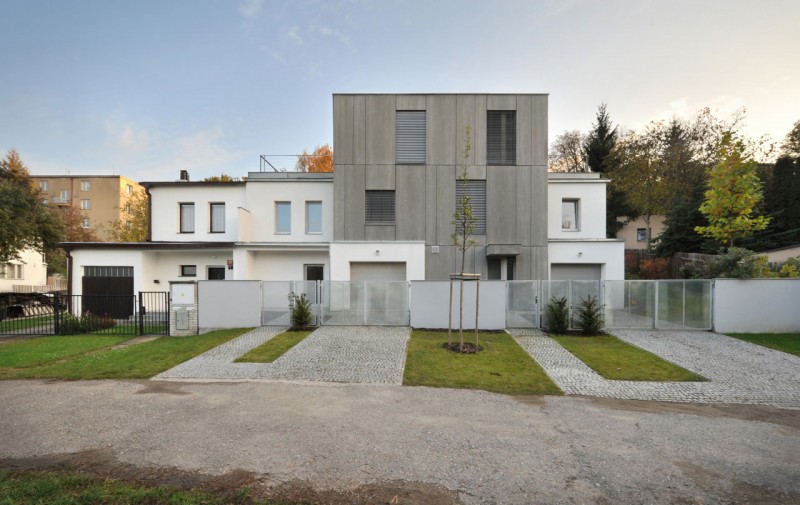 “This energy efficient house in Prague 6 is the result of a complete makeover and substantial extension of a semidetached house from the 1960’s in the north-western part of the city, well close to the centre.

The client bought one part of the house situated on a sloping plot with an interesting view of northern part of Prague despite the dwelling’s very bad state.

The brief was simple – to create a modern house with two separate flats which is going to be energetically and technologically efficient. Simplicity in the choice of materials and building techniques was also requested.

The main challenge came from the plot itself. Its orientation to the north predetermined the layout as well as the placement of openings. Access to the plot and house is from the bottom, northern side.

The southern part of the original house is partially sunk below the stony sloping terrain, shaded by grown trees and an apartment house further up the versant.

The extension hence opens to the south in more light parts of the garden which, however, still offer enough privacy from the views of the apartment house inhabitants.

The original volumetry of the semidetached house – also because no intervention was possible into the other half of the house, not owned by the client – was respected and it was decided that its form will be preserved and reused.

The western part of the extension hence repeats this form and its finish, trying to create a certain natural continuity, as if the house had originally been a row house rather than just a semidetached one.

In between this end-section and the original house, a new, simple, modern, one storey taller, contrasting volume has been inserted. This cubic volume has a different finish (untreated fibre cement boarding), different format of windows (shaded with blinds of the same colour as the facade) and the aim of its austerity is to create tension with the original white-washed and relatively complicated volume.

The original house and one half of the grey block contain the first flat, designed for a general user. This apartment has 3 regular storeys and a roof terrace. The living room was moved to the first floor to get more space and light.

The ground floor contains service and storage rooms and a study with access to the garden. The other flat, built entirely in the new extension was designed for the owner of the house.

Its layout reflects the configuration of the terrain – the living room is located half a storey above the entrance level and has direct access to the garden. It is a 1.5 storey high generous space.

The main and common feature of both the interiors is the steel staircases. Although they are different in shape, both are designed in the same manner: white lacquered zigzag stringers and thin white threads are complemented by white railing made with horizontal flat steel bars. Lightness and airiness were the main goal.

In the owner’s apartment, the staircase floats above first two “heavy” more traditional flights of steps which have a perforated metal balustrade.

From technological point of view, the house is a simple well insulated masonry construction with an annual heat loss of approximately 33kWh/sqm.a. A pellet burning boiler combined with thermal solar collectors and a water storage cylinder provide heat for the house. Both apartments are equipped with heat recovery ventilation.”

Extension of a Single Story Home in Poland by Adam Wiercinski

An Extension for a Cottage in the Garden City of Ville Mont-Royal, Montréal

An Ordinary House, Until You Push the Button! (Video)

Apartment in Ljubljana by GAO architects