The Mama Shelter Istanbul is a quirky hotel located in Istanbul, Turkey, and was constructed under Philippe Starck.

The hotel provides guests with a fun and comfortable place to stay while visiting the stunning Eurasian city. 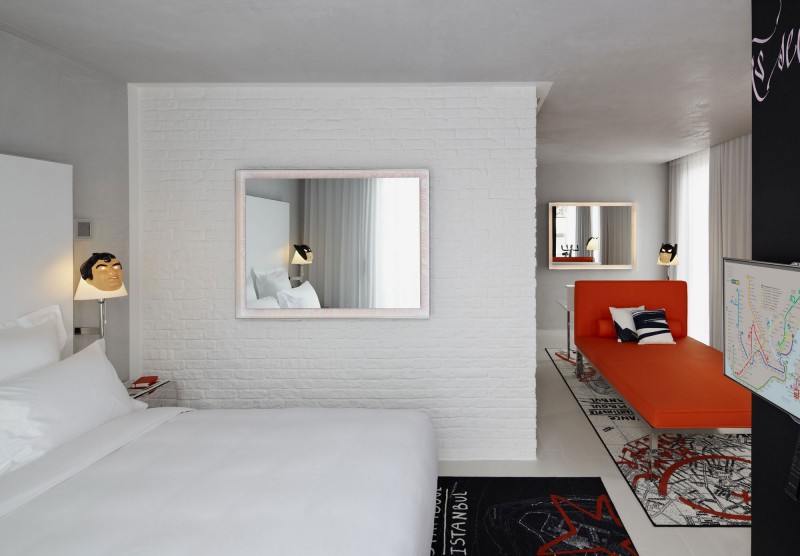 “We had expressed at the launch of MAMA SHELTER PARIS September 2008, that our development would be a succession of ‘coup de coeur’ fulfilling a deep desire to forge links between people for a peaceful humanity.

The idea of MAMA SHELTER ISTANBUL is the essence of a love story. Elsewhere a story that reveals the power of men when they decide to live together with their own cultures, their own religions and signifiers. Istanbul as a witness “in between”, Europe and Asia, which is based on the certainty that the curiosity of the Other can build yourself. This idea that only the otherness embodies a way to cross on which conceal the secrets needed to achieve a pluralistic world where being shines in common. MAMA ISTANBUL makes this quest possible.

A Love Story. That of one of the founders of MAMA SHELTER TRIGANO Jeremiah who, fascinated by this city, has lived here for more than ten years. In love with this city, it did not take long for him to meet the woman of his life with which he launched a silent message to the world, “our love, carved out of differences, will be stronger.”

Jeremiah went through the maze of the city to finally lay his eyes on an area which for centuries remained the face of the plurality Turkey: The Beyoglu district.

Beyoglu has a modern shopping and entertainment for Istanbulites from all social classes and all ages. The main joint is the vibrant and historic Istiklal Caddesi, Taksim Square which joins the square of Tünel. A pedestrian street with shops, typical cafés and pastry shops, native and foreign, restaurants for all budgets as well as pubs, clubs and bars as well as the best bookstores in the city, theaters, cinemas and art galleries. The atmosphere of Istiklal Caddesi has a 19th century metropolitan character, and the avenue is shaped by elegant buildings of neoclassical and Art Nouveau. The “tram from another time” that runs the entire avenue was also relocated in the early 1990s, with the aim to restore energy of yesteryear.

The architecture and design are in line with the other two Mama: an incarnation of this value dear to the founders, ‘hospitality.’ “

A Duplex in a Historic Building in Istanbul

The Shelter by Nha4 Architects

One Comment to Mama Shelter Istanbul by Philippe Starck