Originally built in 1938, this seaside house in Noordwijk, The Netherlands, has been thoroughly renovated. Its highlights include a thatched roof and a striking spiral staircase. 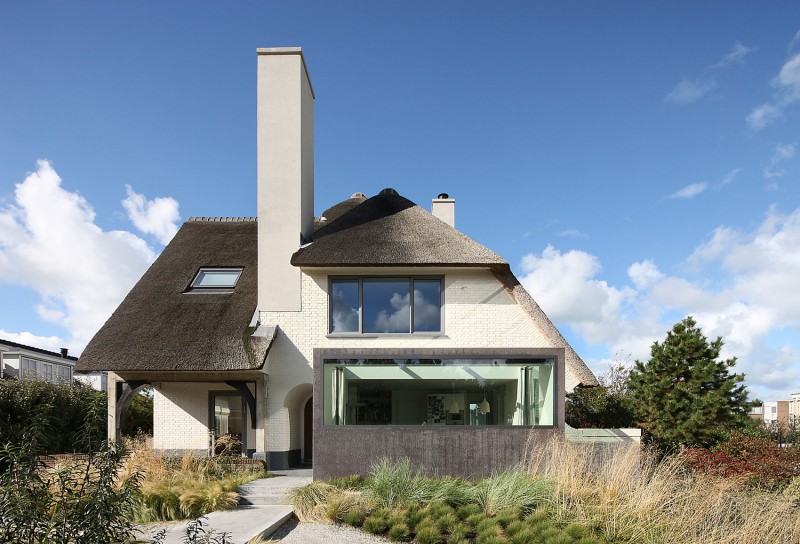 “Built in 1938, this Noordwijk seaside villa was originally the holiday home of a concrete factory owner. Battered and blustered by the salty sea weather over the decades, the house was in need of renovation.

Besides roof replacement and basement repairs, the bedrooms, bathrooms and windows were outdated and some spaces had grown too small for the clients’ requirements.

Maxwan’s additions bring new distinctive features to the house, while respecting its original character.
Extending into the back garden with floor-to-ceiling glass on three sides is the new living room, which maximizes light and views from among the treetops towards the garden and further out to the sea.

In the opposite direction stretches the new kitchen, incorporated in a single precast concrete block. Its color contrasts to the existing house while harmonizing with the surroundings.

Both extensions of the new kitchen and living room are clearly separated from the existing structure with glass slits, through which the sky dramatically bursts.

The bespoke spiral staircase connecting the uppermost levels elegantly uses the balustrade to support the treads, with the laser-cut pattern blending from closed to open for structural efficiency and recalling the breaking waves. The attic is given a new lease of life by new multi-functional wall furniture and large windows.

In addition to these major components, the entire house is renewed in a manner complementary to the original house.”

House on a Seaside Bluff by Paul Merrick