Home in Parede by Humberto Conde

Home in Parede was designed by Humberto Conde, and it is located in Parede, Cascais, Portugal.

The home was completed in 2012, and features an interior made more spacious by its minimalist design and bright white walls. 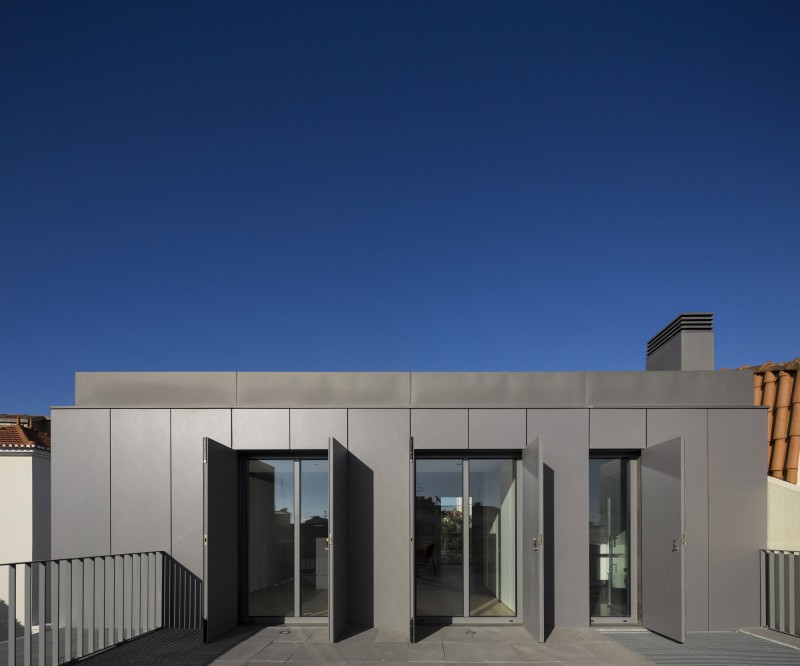 Home in Parede by Humberto Conde:

“The project aims to develop a single house located in the centre of Parede, Cascais, in a site characterized as Historical Urban Space. The lot of the house as a particular elongated and thin configuration like the adjacent lot on the left side – South.

The nearby buildings are part of a summer houses morph-typological group that proliferated in the Portuguese coastline in the 40′s, 50′s and 60′s. These houses were usually built as second houses or summer residences, presenting, in general, a garden that involves them throughout their perimeter. The exception is made in smaller lots of recent date where it was usual the implantation of terraced houses, as a way to potentiate the opposite top sideband.

In this particular case, given the lot’s configuration and taking into account the adjacent house (with three floors above the ground and one basement), we believe that the new construction should certainly be marked out through these alignments, namely the build’s height, volumetry and the alignments of the main facade.

The new building should promote a dialogue between the surrounding area by a language of contrast in its image and shape regarding all the spatial articulation principles that mark the adjacent building – as well as by the used construction details, such as window openings, metric of the facades and visual relation with the exterior.

Safeguarding a small courtyard at the entrance of the house – access area to the parking lot and the house – that assures the alignments, the new building is developed in three floors above ground, freeing at the back (West), a green space which is in direct relation with the social spaces of the house.

The building is focused on the alignments with the adjacent house, with a East/West orientation, which allows to free part of the lot at East as a reception and decompression space, providing an area for two parking spaces inside the lot.

There’s a longitudinal corridor, delimited by the contiguous lots’ walls, with the introduction of a single vegetable element – a tree -, allowing the automobile and pedestrian access to the interior of the housing.

It’s also considered the interest in maintaining the permeability of the soil by applying a large green surface at the back of the house. This will allow the infiltration of a significant percentage of rainwater and the optimization of the access to the infrastructure network derived from extensions installed on the public road.

The access to the interior of the house is made by a small and slightly inclined ramp, which is also use as a common distribution atrium of the automobile and pedestrian access.

At the ground floor level – the entrance floor level -, on the left side of the building are the kitchen and the clothing treatment area that are accessed through a distribution hall that makes the transition between the upper floors and the social spaces of the house – living room and garden. At this level we have a large permanence space – the living room -, establishing a close relationship with the exterior – the garden.

Reaching the first floor through the distribution staircase, located on the right side of the house’s main access, we’ve got two bedrooms equipped with their own private bathroom and closet. Both bedrooms are naturally lit through the openings located on the East and West facades, having been also created a small outdoor garden to canalize natural light and ventilation of the bathrooms of both bedrooms.

The second floor consists on a single space – the third bedroom and a bathroom. Both spaces enjoy natural light and a strong relationship with a terrace facing the West, where a tree coming from the garden on the lower floor emerges.”

A Spacious and Stylish Contemporary Home in Cabral