This contemporary home was built on a steep slope in Idaho, USA, overlooking the landscape of Lake Coeur D’Alene. 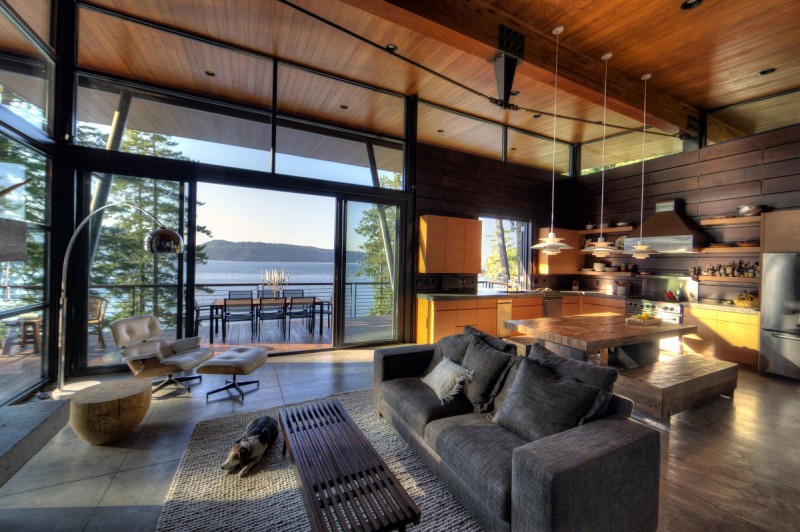 “The goal of the Coeur D’Alene Cabin was to create a modern cabin for a couple, their kids, and their grandkids. Located on Coeur D’Alene Lake in North Idaho, we considered the combined occupancy of three generations, providing separate spaces for privacy in addition to common rooms that bring everyone together comfortably.

One of the driving forces behind the design was the site’s existing conditions. The property is steep and narrow with a natural spring that runs beneath the hillside. We realized you could shift the dirt anywhere and water would emerge. This resulted in the dual form approach, bridging the gap where the underground stream flows naturally.

The Cabin is centered on the notion of a large close-knit family, and each member was considered in the design. We strove to find commonalities between family members to develop an aesthetic that addressed everyone’s needs and visions.

The view from the site was an important aspect to the client and integral to the design. To maximize outdoor space and connection to the landscape, columns were absent on the deck. A steel beam system supports the cantilevered roof and allows the windows to extend to the ceiling, blurring the delineations between indoor and outdoor spaces. Large sliding doors and indoor/outdoor kitchen counters create a unique relationship between the deck and indoor common areas.”