House Tabasek is a project completed by Qarta Architektura in 2013.

It is located in Palkovice, Czech Republic. 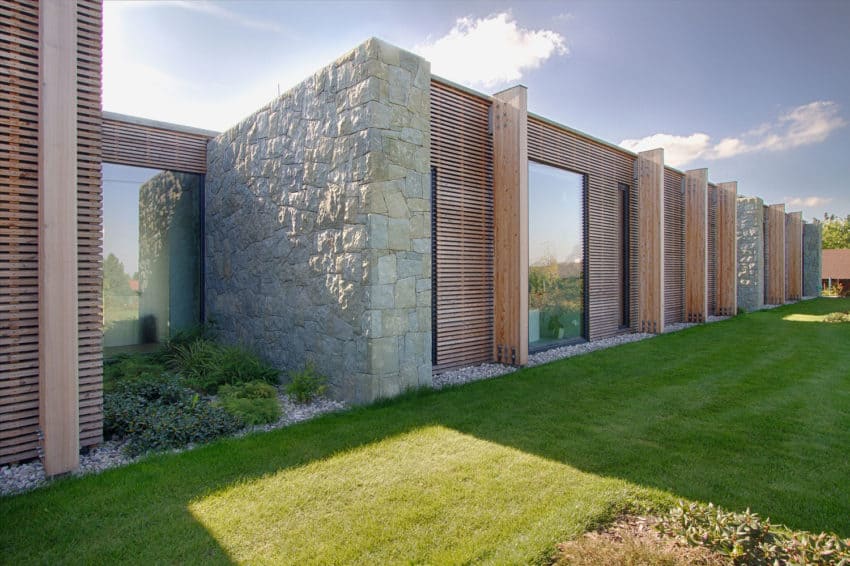 “The house is situated in the periphery of Palkovice, nearby Frýdek Místek. From this site is the view of the Beskydy mountains.The first idea was to reconstruct the old house on this parcel.The original house was situated in the middle of the garden and the architecture of the house was a product of the nineties of the 20th century.

After a long effort to modify the old house and to adapt it for the new requirements, we have find out, this is not the right way. So we have decided to build a new house.This idea allowed to place a new house in the back part of the site, so the house has a view of the mountains and facing the south in a same time.Another added value of this solution is that the owner can live in the old house, while the new one is being constructed.

The concept of the house is also based on the requirement of living on one height level.The solution was very easy on this flat land.

The next important point was to create some terrace, patio and atrium not just like a relaxing zone, but also like a connection between the interior and exterior. Interesting elements of the house are rooflights in the children’s room and entrance hall.Outdoor atriums with greenery placed inside the house are enlivening of interior.

The house is designed to the individual zones such as: part of the garage, entrance zone, or private area. The private area – children’s room with own sanitary facilities follows the entrance area.Another part – semi private area is made up of the kitchen, dining room, living room and outdoor covered terrace.In the northern part of the house is a cloakroom, bedroom, bathroom and study room.

The house is materially conceived as a combination of the stone, wood and glass.

Stone permeates from the exterior to the interior.Glass is in large areas for maximum connection with the exterior and valuable perspectives. The stone walls are harmonized with wooden paneling, beams and wooden floors.”