The Mountains and Opening house is a design room for a Japanese sneaker brand, “Dragon Beard”, as well as a residential house.

Designed by Japanese studio EASTERN Design Office, this 3,895 square foot estate is located in Takarazuka, Hyogo, Japan and was completed in 2009. 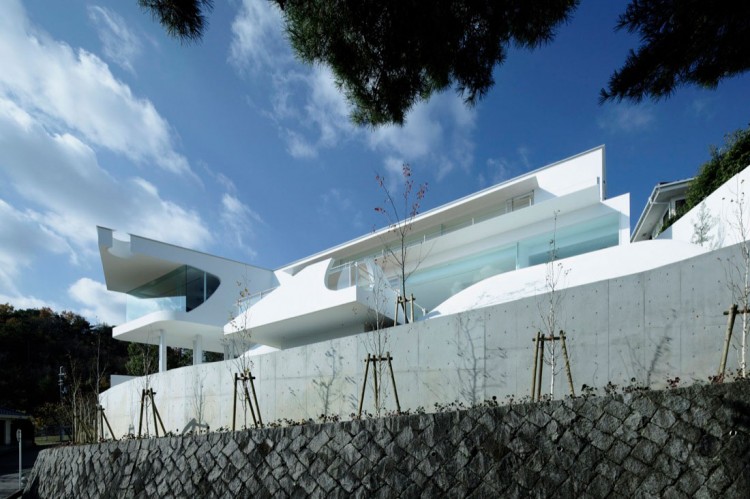 “The site is in Takarazuka-city of Hyogo Prefecture. It is located in an exclusive residential district that commands an entire view of the Osaka Plain. The architecture is built on the slope of a hill with an elevation of 330 meters. The level difference of the site is 8 meters.

Taking advantage of the slope, one of the characteristics of this site, an architecture which suits the desires of two persons is built.

A. To be underground in the warmth of the earth.
B. To fly like a bird.

A. To be warmed up. A lower floor, a house, invisible in a mountain.

The site has an 8 meter difference in height. 8 meters is higher than a two-story building. The lower floor is in the ground of the slanted site. It is invisible from the upper road.
There is a bedrock layer 1.5 meters beneath the ground surface. It is so hard that even a shovel car could not crush it. Dig to the bedrock and the foundation is supported by this bedrock.
Build two mounds using the soil dug. Insert a residence between these two mounds.
Built on “a new topography-mountain”, all parts of the building are close to the earth. The mountains are designed to emphasize the slope.

An exclusive residential area on a hill features a good commanding view as its sales point. Development of this kind of community is planned in a similar way with no individuality. We consider this phenomenon as “a loss of topography”. We have dreamed of a mountain whose slope was scraped away. The lost mountain is designed into this architecture.

B. Flying. An upper floor, a design room

Observe the Gulf of Osaka, high-rise buildings, Kobe port, Kansai Airport, Itami Airport, and shadowy blue mountains.
The land originally slanted at an angle of 18 degrees. Mounds are built there to let the slope undulate.
These mountain waves are topography where no previous topography existed. The upper floor was designed to float on these mountain waves.
We have designed the form which passes over the waves. Is it a dream of a long-distance ship going over high waves or is it a dragon?

The dream of this architecture is like a voyage setting out.

An 18 meter-long terrace. The sea and a range of mountains 60 kilometers away can be observed. When standing on this terrace, rows of other houses in this area are out of sight. This is the way we have arranged this architecture and its openings.
You can get a sense that your body is slightly floating. It is our intention to give the sense of being on a deck of ships, but not in the house. The design room on the upper floor of this architecture is a ship.
The plan is designed in L-shape. The edge protruding greatly from the slope is an opening that swallows the outside. Straight eaves run amidst the curvilinear forms of the topography. The eaves project in a powerful manner not to be beaten by the inherent force of the topography. They are thin, thick, short, long and carved.

To be protected by the house, yet at the same time have the feeling of flying away. Making two extremes into one. This is realized in the architecture in the corresponding forms of the upper and lower floors.

It is a cave and also a nautical form.
It is flying away, yet it is anchored.
It is drifting, yet it is homely.
It is sky, and it is Earth. It is far, yet it is near.

The Material of the Mountain

One of the two white mountains functions as a structural support for this building, while the other mountain conceals the bathroom.  These two mountains are also set into the living spaces of the residential quarters.

The Structure of the Deck

The framework of the upper floor is steel and the lower floor is reinforced concrete.  The upper floor evokes a sense of being on the deck of a boat and in order to achieve this feeling architectural columns and walls are designed as to make one unaware of their existence.

Entering the house from the northern road, a 14meter wide opening and the 16.5 meter x3 meter terrace outside create the feeling that your own body is floating in the scenery.  This is a deck.

To achieve this, we used two different methods.
1.    Revaluation of the trusses
2.    Concealing the structural members in the curves

The lower floor fully utilizes the slope of the mountain.  The hidden areas become mountains?while the areas that is required light become valleys.  These rolling undulations are all part of the design.

Taking balance to unify the upper and lower portions, the curves of the mountain are made continuous with the curves of the openings.  There are two thin iron plate eaves on the openings: one with the length of 14 meters on the upper floor and the other with 16.5 meters on the lower floor. The thickness of the iron plate is only 9mm. The straight line of these two eaves emphasizes the expansive  spreading horizontal width of this house. Consequently, this makes you forget that the house is on a sloped site.

The overall whiteness is not just a general white coat of paint.  It is white mixed with blue.  This is because we want white that corresponds with the blue sky.  In addition, we intend this white to reflect the light of fragments of marble scattered in the raw material which covers on the surface of two newly built mountains.”

One Comment to Mountains and Opening House by EASTERN Design Office