Located in Highgate, one of the most expensive London suburbs to live in, this three-story contemporary home was built in 2003 within a budget of £1.2 million. 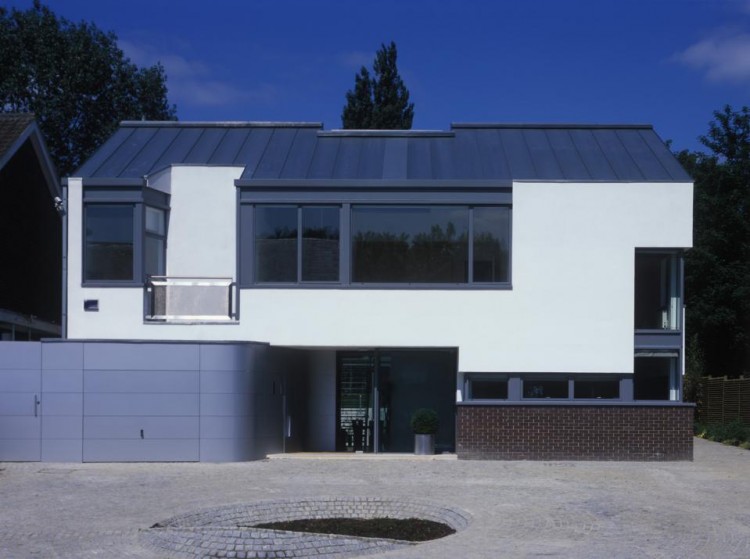 “This house is situated on a long plot, rather narrow in width, within the Heath Fringes Conservation Area in Highgate, London. The scheme marries the conflicting desire of the Client to maximize internal accommodation to include seven bedrooms, and that of the Planners who were adamant the new construction should not surpass the volume of its modest predecessor.

Based on the Client’s ambition to incorporate a central gathering area for the family, the layout is “U” shape, set round a glazed, triple-height ‘cascading’ atrium. This allows ample daylight into the heart of the house, alongside unimpeded visual connections from all floors to the rear garden and the golf course beyond. The circulation spaces are arranged around the edge of the atrium, with the exception of the primary staircase and ‘bridge’, which sit as steel-and-glass elements within the surrounding solid surfaces.

The design is reminiscent of a series of monastic cells arranged around a chapter house: the cells provide accommodation for retreat, contemplation, rest and sleep within small but comfortable spaces. The large atrium space serves as cloister, refectory and chapter house: its circulation areas are places of encounter, and its lower levels are for gathering, eating and socializing.

The overall form is articulated by a ‘stepped’ arrangement in section to create a succession of tiered levels, culminating at the bottom in a basement swimming pool. The pool partially extends into the garden with an openable connection to an external sunken courtyard and, beyond, to the landscaped rear garden. This connection blurs the distinction between interior and exterior.

A large sheet of structural glass in the floor of the entrance area establishes a visual link with the swimming pool beneath. The views of the triple-height atrium unfolding from the entrance, together with the glass floor hinting at the level beneath, introduce the visitor to the simultaneous perception of the whole range of internal spaces.”

House in the Garden by Cunningham Architects